Recent weather reminded this fair weather angler that we are on the downside of the 2021 fly fishing season. However, I typically take advantage of intermittent nice days in October to satisfy my addiction. The high in Denver on Wednesday was forecast to be in the upper sixties, so I decided to make another trip to a Colorado waterway, before the temperatures became too prohibitive.

Instead of focusing on the stream flows, I first surfed through my Weather Underground app, as I looked for locations with relatively mild air temperatures. Along with streamflows and air temperature, a third variable entered the destination choosing equation. Late October coincides with the brown trout spawning ritual, and historically I discovered that eating is not the number one objective, when the browns are preoccupied with procreating. Sure, not all the brown trout are on the same cycle, and some continue to satisfy their appetites, but from a big picture perspective, fewer trout are available to the searching fly fisherman. Rainbow trout, on the other hand, spawn in the spring, so their instincts have them eating as much as possible to fatten up for the lean and cold days of winter. A stream with a decent population of rainbow trout, therefore, became the third variable.

Most of the Front Range streams are primarily brown trout fisheries. My inclination quickly leaned toward the Big Thompson River, South Boulder Creek, and the South Platte River in Eleven Mile Canyon. I guestimated that South Boulder Creek holds 25% rainbow trout, while the Big Thompson River and Eleven Mile Canyon contain populations that are 50% of the pink striped fighters. The forecast for Wednesday projected highs in the low sixties for Lake George, CO and highs in the low fifties for Estes Park. Flows on South Boulder Creek were a piddling 7 CFS, so I eliminated that option quickly. I made the South Platte River my destination, but I did not rush out the door, in order to allow the low sun to warm the narrow canyon before my arrival. 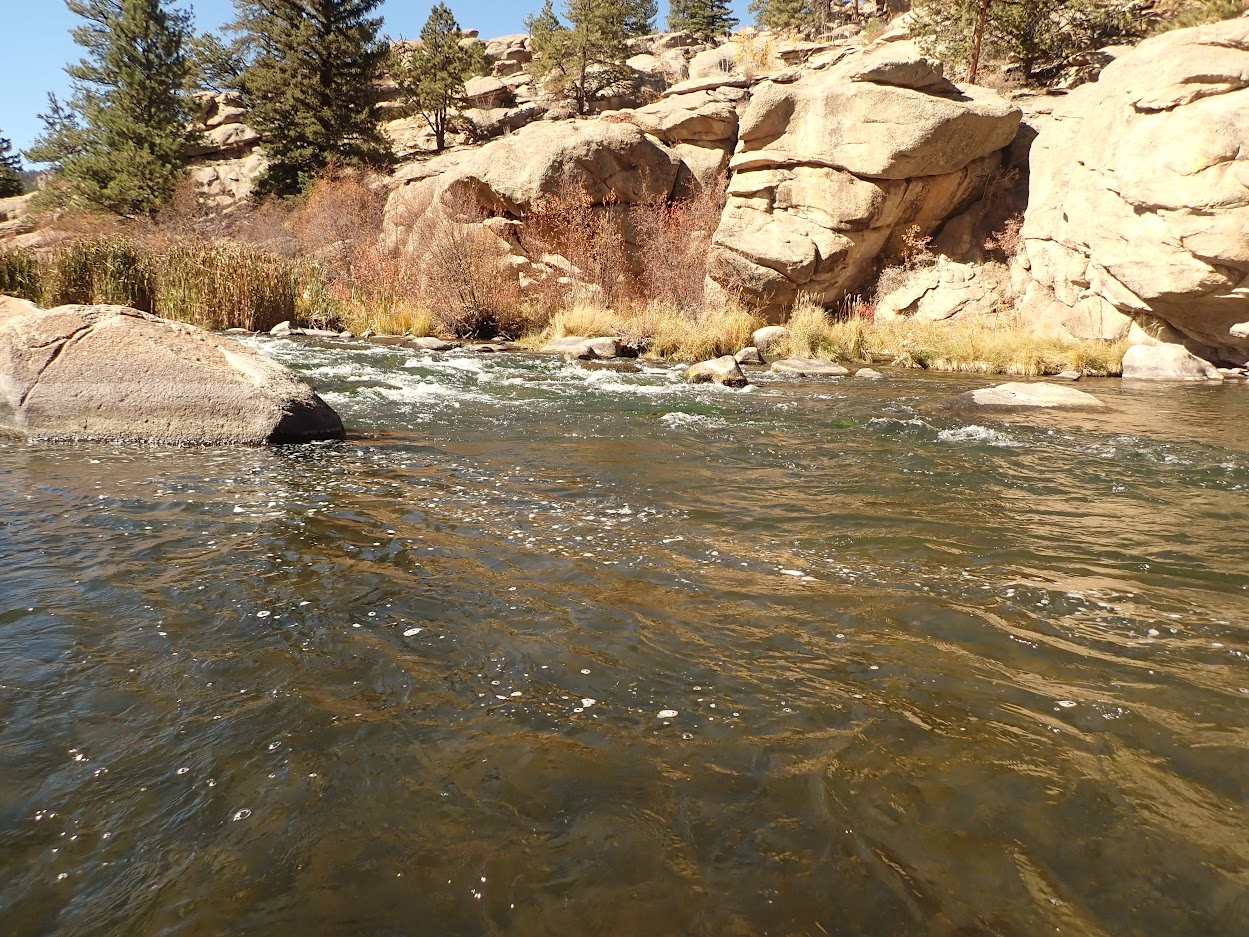 Spent Some Time in These Prime Runs

By the time I arrived in the special regulation area of Eleven Mile Canyon and completed my preparation routine the air temperature was in the mid-forties, and the river was mostly covered by shadows. I pulled on my fleece hoodie, North Face down coat, and snugged my New Zealand billed hat with earflaps over my ears. For a fly rod I selected my Sage One five weight with the hope of tangling with some larger trout on October 20. 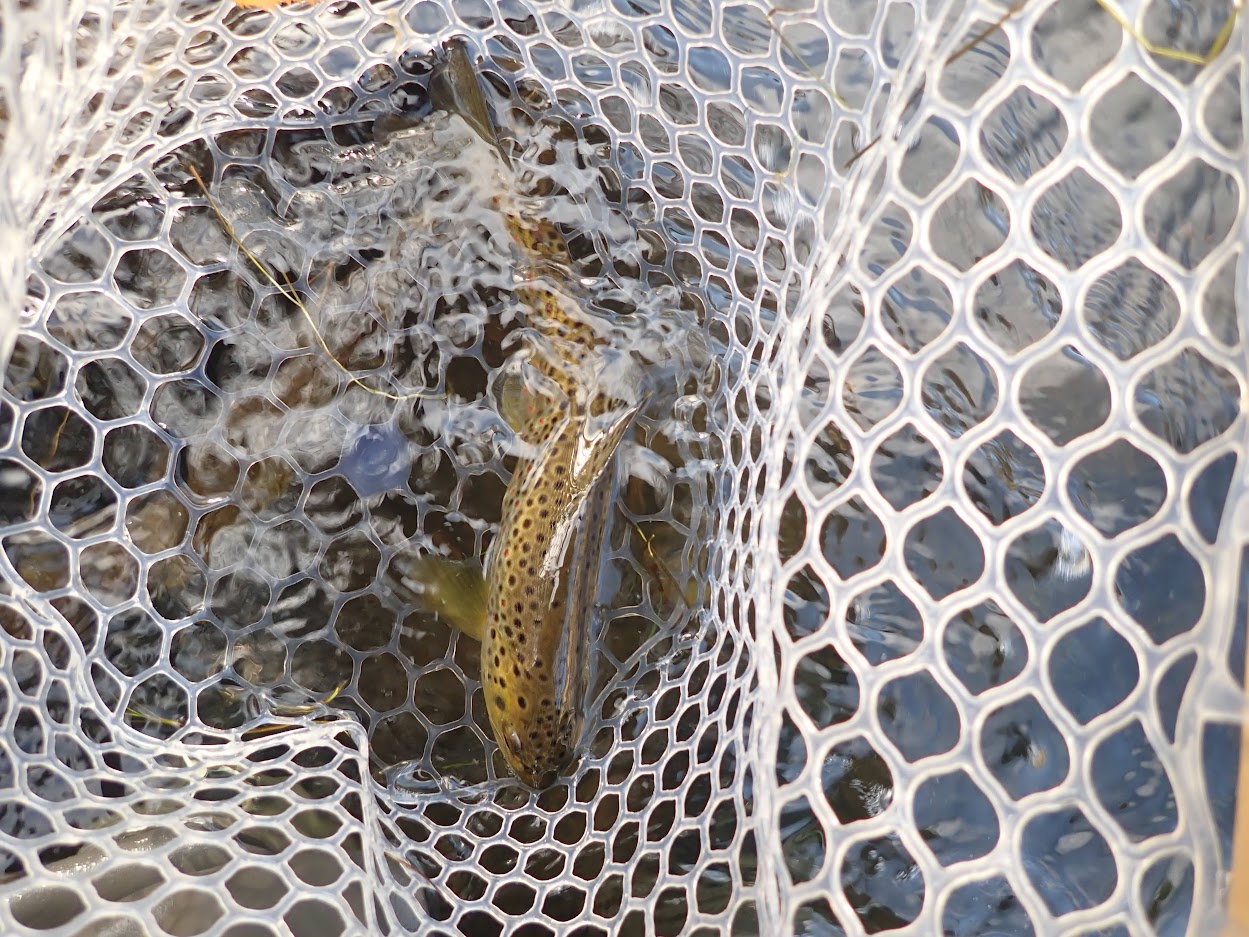 I hiked down the road for .1 mile, until I found a nice angled path of moderate slope to negotiate the steep bank. By the time I arrived at a nice open spot along the river, it was 11:45AM, so I paused to devour my standard lunch. After lunch I rigged my line with a New Zealand strike indicator, split shot, hares ear nymph and sparkle wing RS2. When I stopped to purchase 5X and 4X tippet spools at the Anglers’ Covey in Colorado Springs, I asked the salesman what was working, and he matter-of-factly stated blue winged olives and midges, so this dictated my RS2 choice. For the next 1.5 hours I prospected the nymph combination through deep pockets and runs, and I succeeded in guiding four trout into my net. The first and second were twelve inch brown trout, as number one nipped the RS2 and number two grabbed an emerald caddis pupa. During the early half of this time period, the hares ear failed to produce, so I swapped it for the emerald caddis pupa. 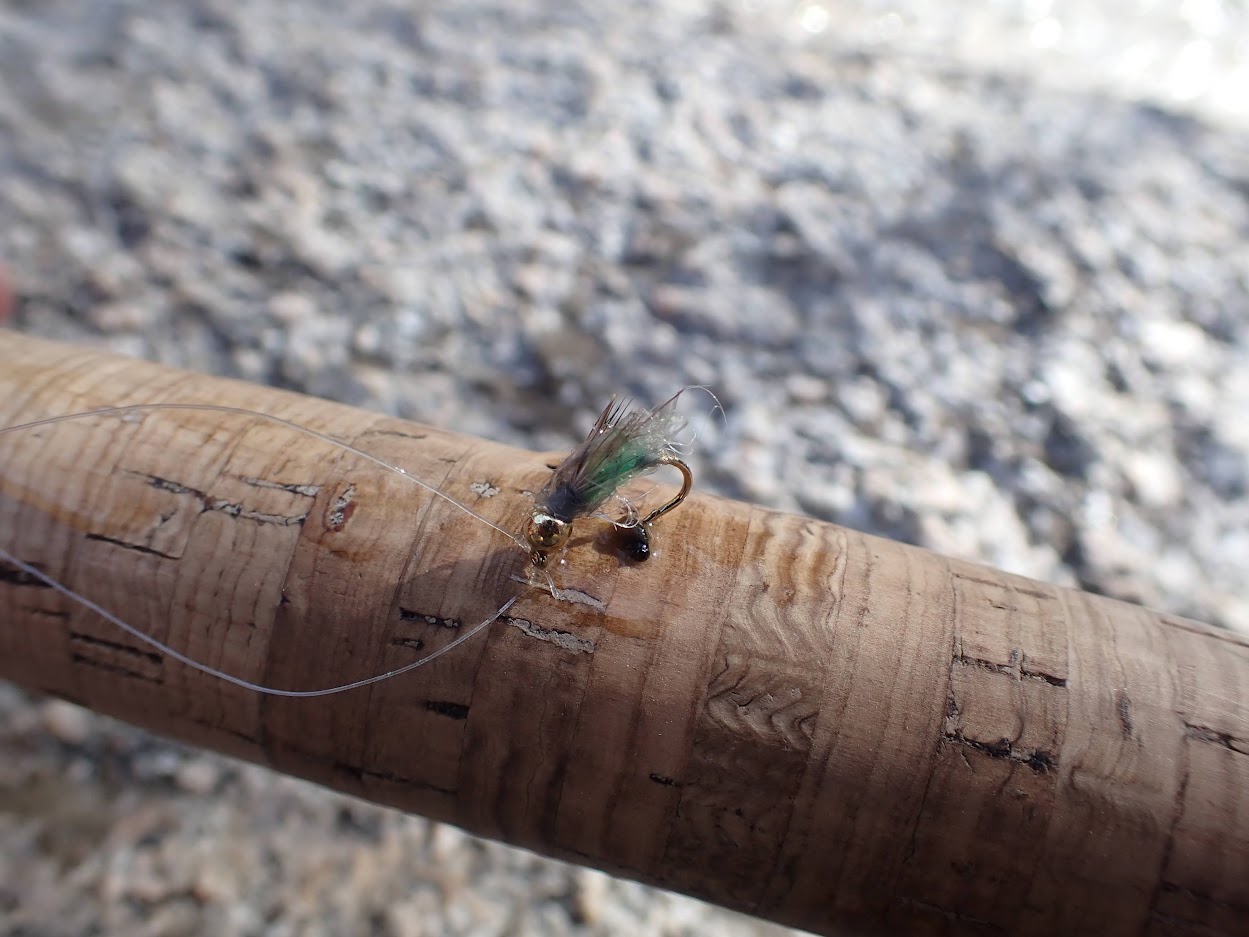 Close Up of the Emerald Caddis Pupa 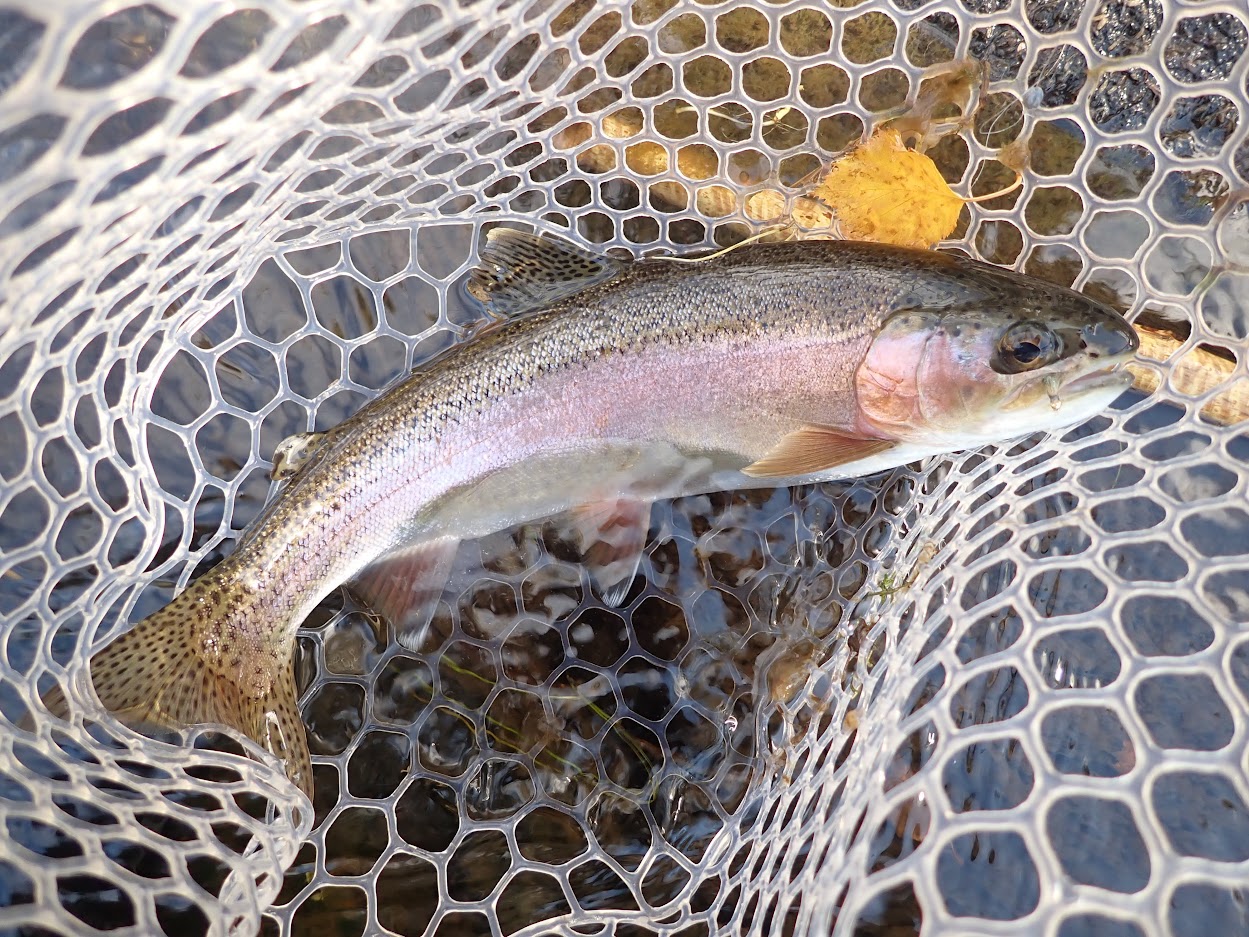 During the latter portion of the after lunch time frame I landed two gorgeous rainbow trout. The first one also grabbed the caddis pupa, as I lifted it from the tail of a deep pocket. Number four was a sixteen inch beast, and it was easily the best fish of the day. Similar to the caddis eater, the large rainbow nabbed the trailing sparkle wing RS2, as I began to lift at the tail of a wide slow moving pool bordered by two merging currents on either side. Needless to say, the shimmering silver and pink slab made my day. 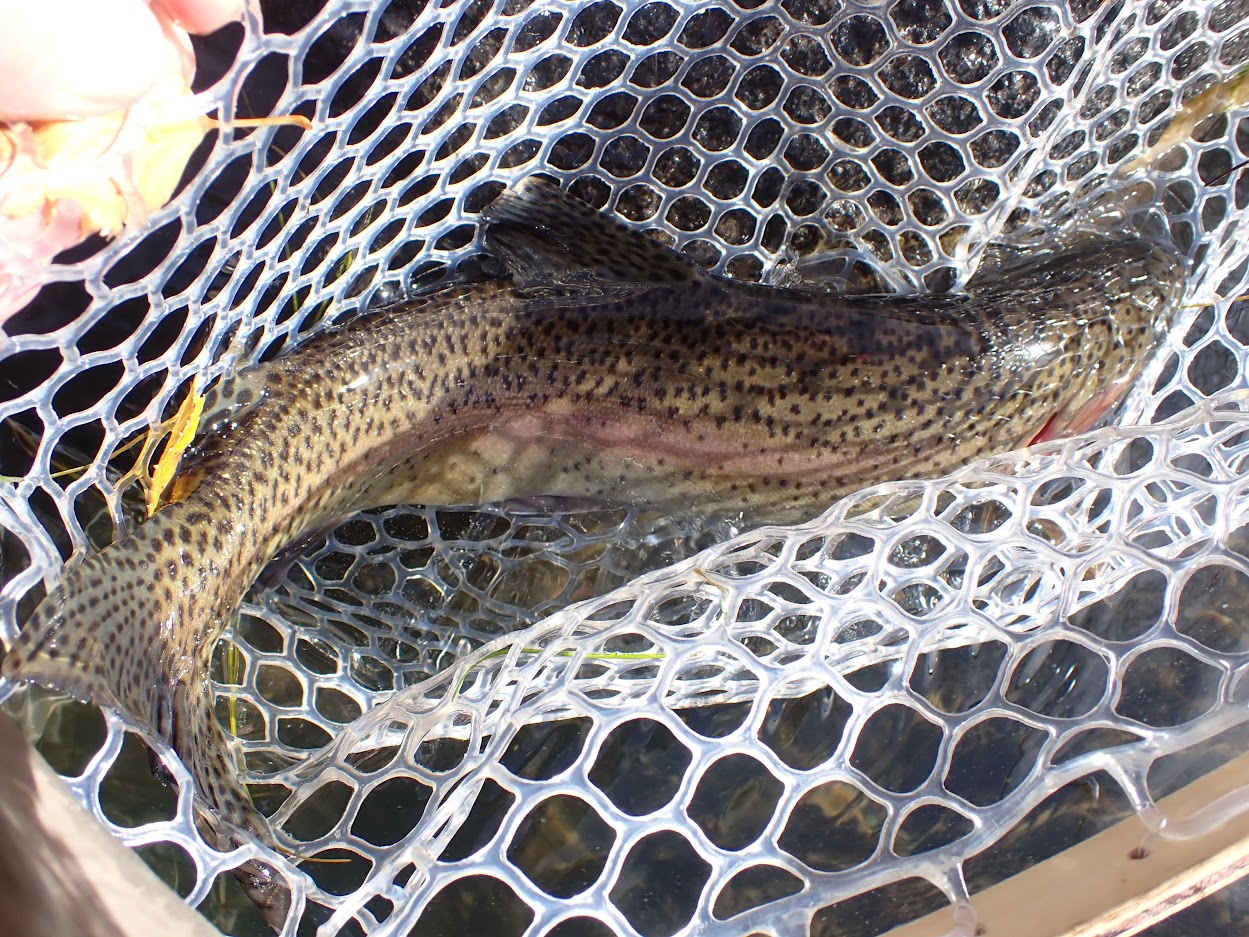 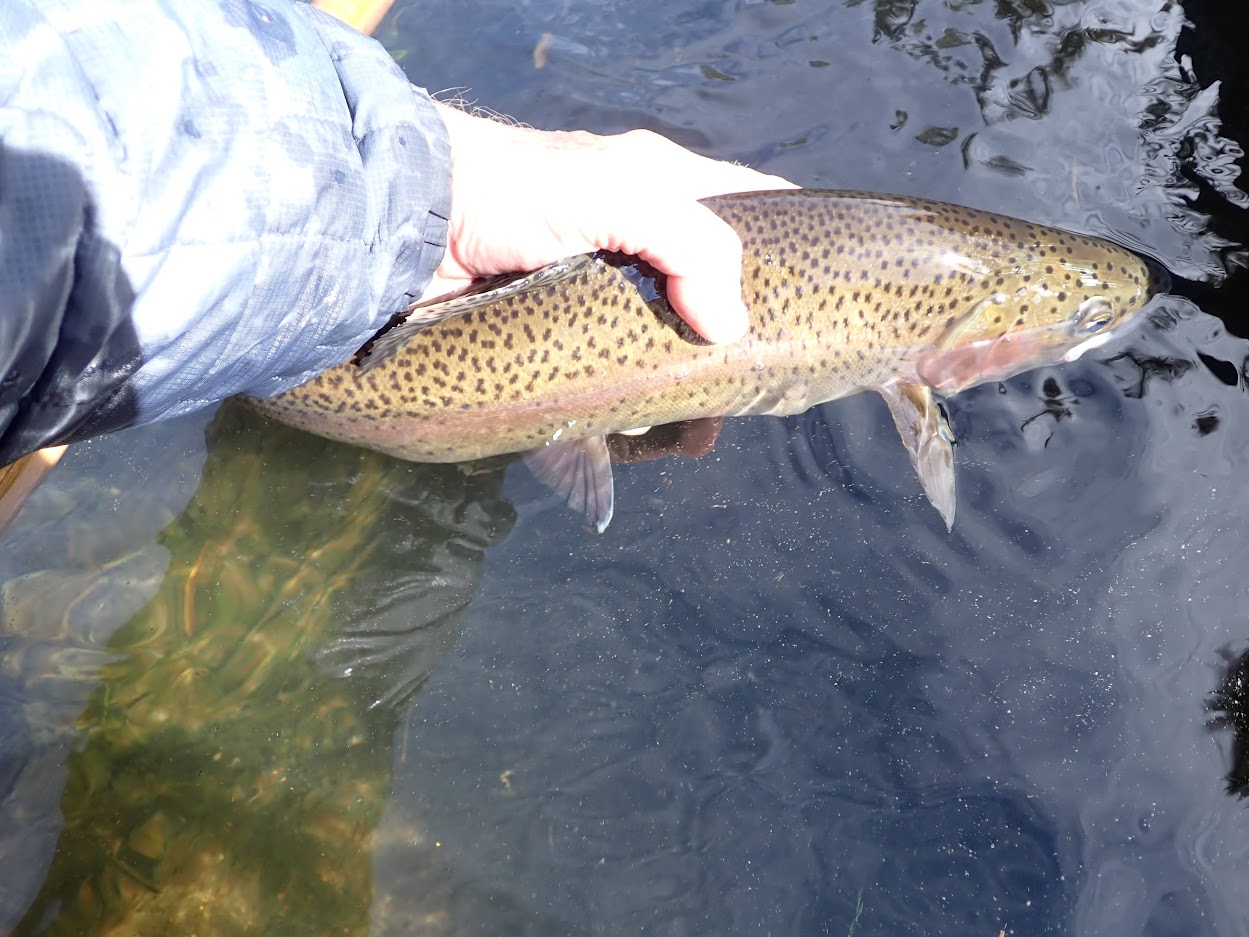 From 1:30PM until 3:30PM I covered a significant amount of river real estate, but failed to register any additional trout. I hopped from prime pool to prime pool and directed my casts to the faster runs that entered the upper portions of the pools. I experienced two temporary hook ups that felt substantial, but I was unable to convert. Bright bluebird skies allowed brilliant sunshine, and this in turn warmed the atmosphere to create comfortable fishing conditions, but this was great weather for fly fishermen, but not favorable for blue winged olives. I spotted a few small olives in the air and three rises during my time on the river. I hoped for more surface action, but it never materialized, and this left me probing the depths with the strike indicator and split shot arrangement. The worst part of the four hour outing was the never-ending task of plucking aquatic slime from my flies. I inspected the pair of flies on every third cast, and I was rarely surprised by clean hooks. 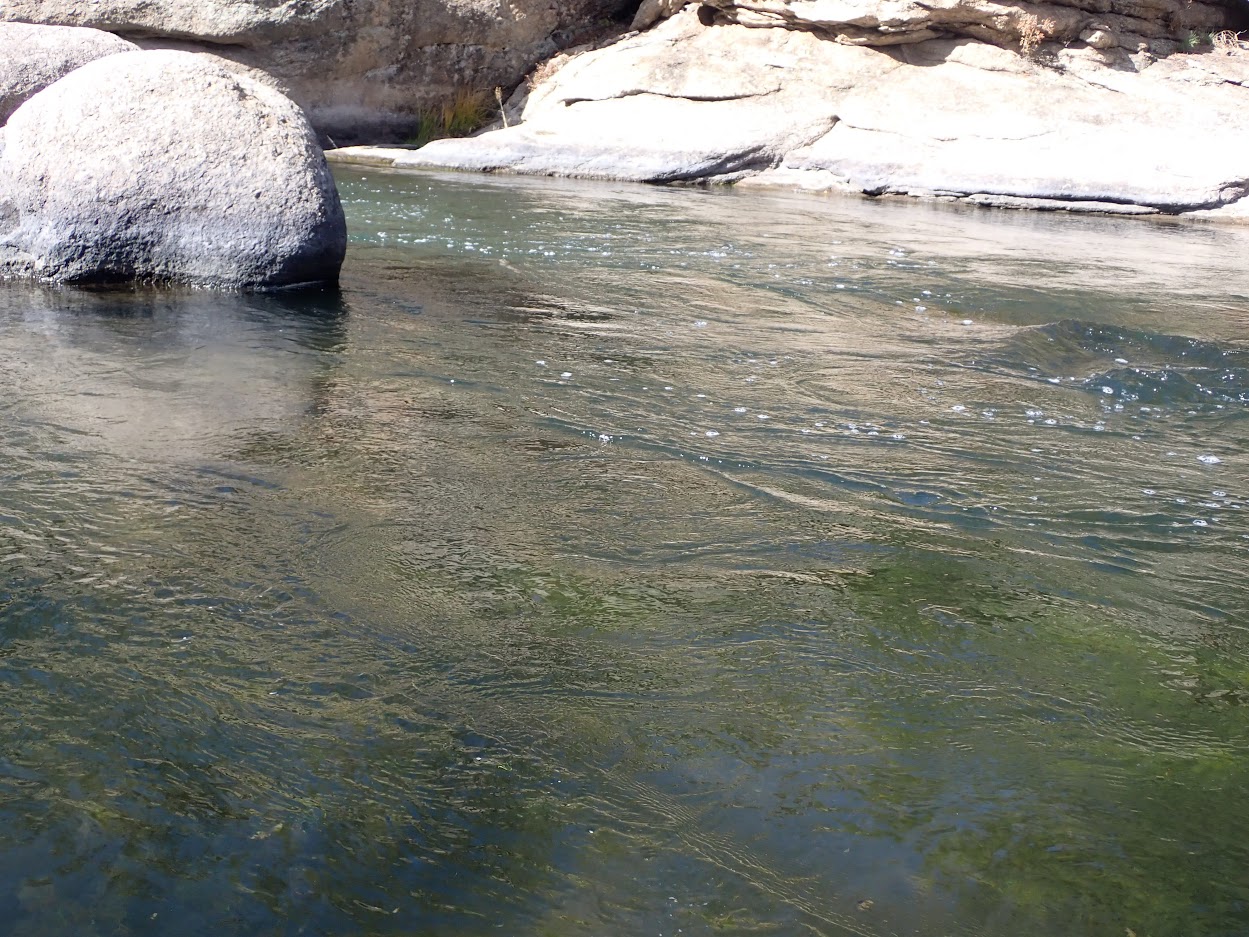 Four trout in four hours of fishing is surely a slow day; however, I adjusted my expectations downward given the cold temperatures and the absence of significant natural insect activity. Landing the sixteen inch rainbow was a blast, and seeing it sagging in my net made the trip worthwhile. Perhaps another mild overcast day in the future will attract me to Eleven Mile Canyon one more time.