My sampling of the South Fork of the Rio Grande River on Monday after our Revolution Rails experience and a hike on the Lake Fork Trail convinced me to revisit the gorgeous cold and clear flowing stream again on Tuesday, June 21, 2022. Other than my brief exposure on Monday, I never fished the South Fork previously, so I was anxious to give it a try. I also considered the main stem of the Rio Grande, but after spending three days drifting the river in 2021, the thought of wade fishing the big river did not appeal to me as much as exploring the more intimate South Fork, although the significant tributary sourced near Wolf Creek Pass was by no means a small mountain creek. At most places the South Fork was twenty to thirty yards wide, and even at somewhat elevated post-runoff flows, I was able to cross at numerous locations to obtain favorable casting positions.

The temperature was in the low sixties as I began, and I felt comfortable during my stay on the creek with just my fishing shirt. There were a few periods of clouds, but bright sunshine ruled the sky most of the time. It was my first time on the South Fork, so I had no experience with water levels to compare against, but I suspect they were seasonally low although high compared to ideal. Nevertheless, I found the conditions to be very conducive to fly fishing. I began my quest for wild trout with a yellow body pool toy hopper, an iron sally nymph, and a go2 sparkle caddis pupa. My success was almost instantaneous, as three twelve inch brown trout slashed the hopper and four grabbed the caddis pupa. Between 10:30AM and noon I built the fish count to seven, and all but one fish were browns in the twelve inch range. One small rainbow joined the mix. 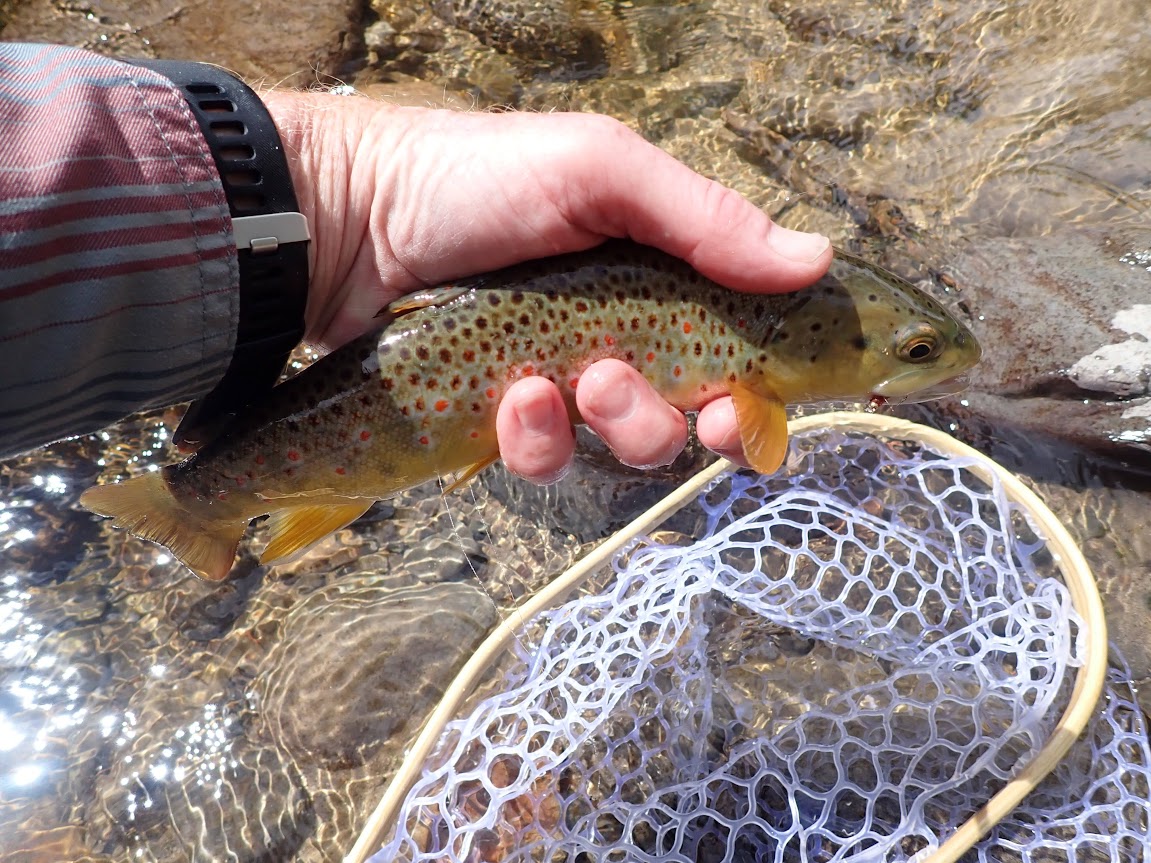 While I ate my lunch, I observed a sparse cloud of mayfly spinners above the riffles to my left. As I munched my sandwich, the mating swarm intensified, and then five or six trout began feeding in the deep eddy in front of my position. I decided to finish my sandwich, but I deferred the remainder of my lunch in order to capitalize on the developing spinner fall. I removed the dry/dropper arrangement after lunch and knotted a classic size 10 Chernobyl ant to my line and added a rusty spinner on a twelve inch dropper. The combination generated a few looks and refusals, but then the two flies were completely ignored, while ravenous trout sipped spinners on a semi-regular basis. 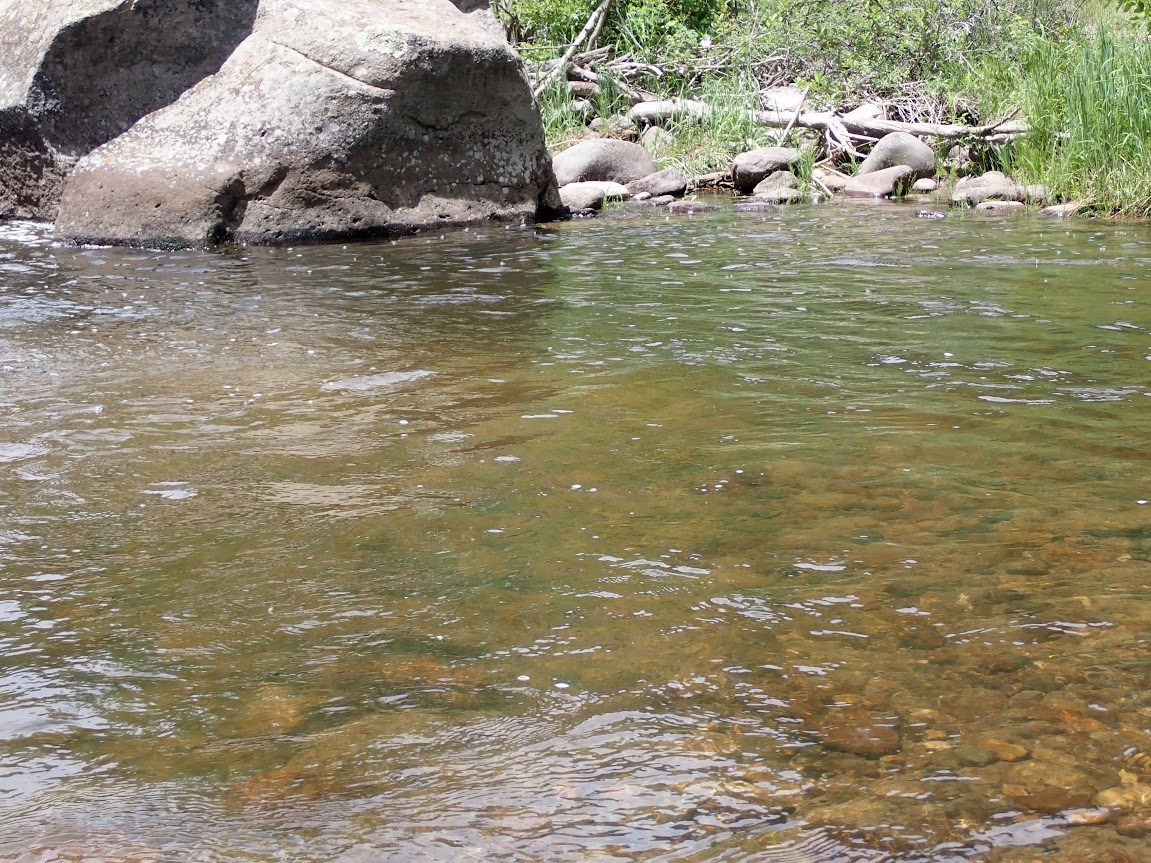 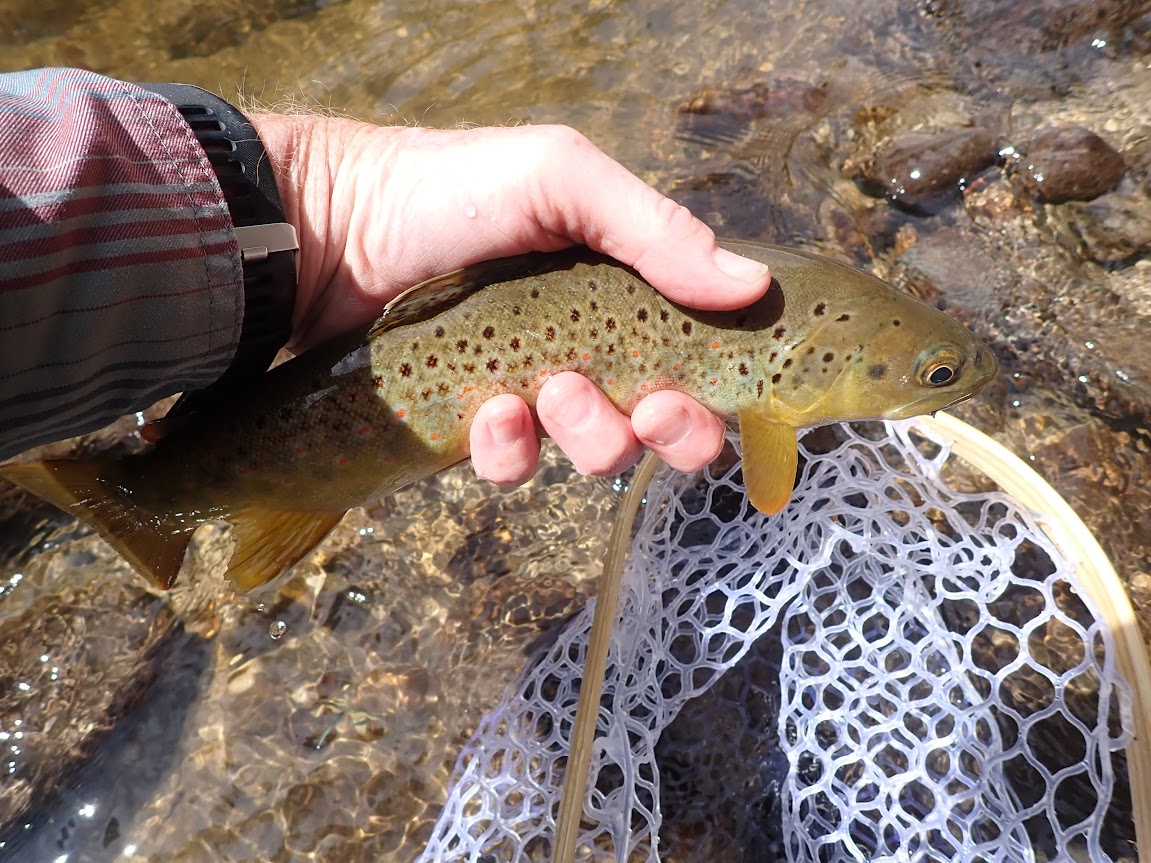 I was averse to missing out on this early season dry fly action, so I reevaluated my lineup, and I replaced the rusty spinner with a light gray size16 comparadun. The body color of this fly seemed to more accurately mimic the naturals drifting about the eddy. I smashed down the wing to flatten it and create the image of a spinner, and I began casting to various parts of the eddy, where rises materialized. It worked. I landed two additional trout along with several temporary hook ups, and then I progressed upstream along the left bank and upped the count to ten. At some point I pulled some of the deer hair fibers from the comparadun, as I removed the fly from a fish’s mouth, and I replaced it with another version with a fuller wing. 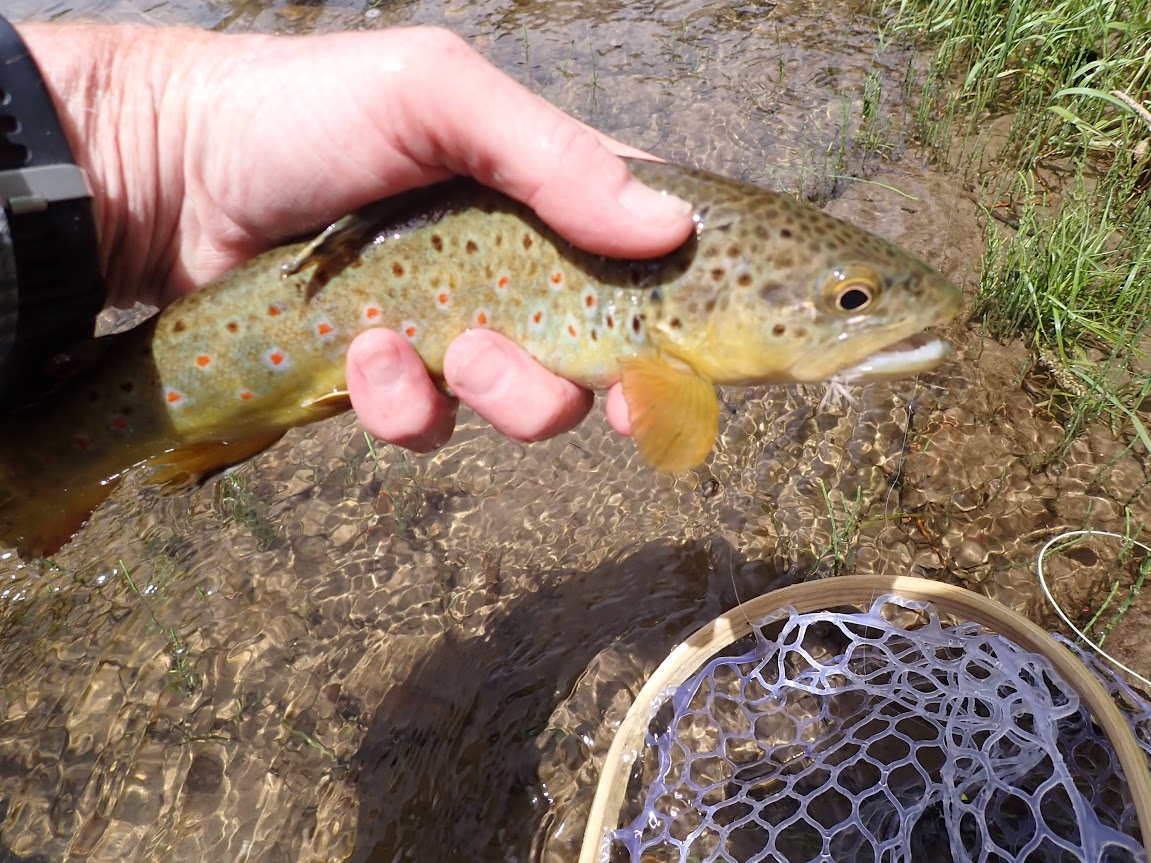 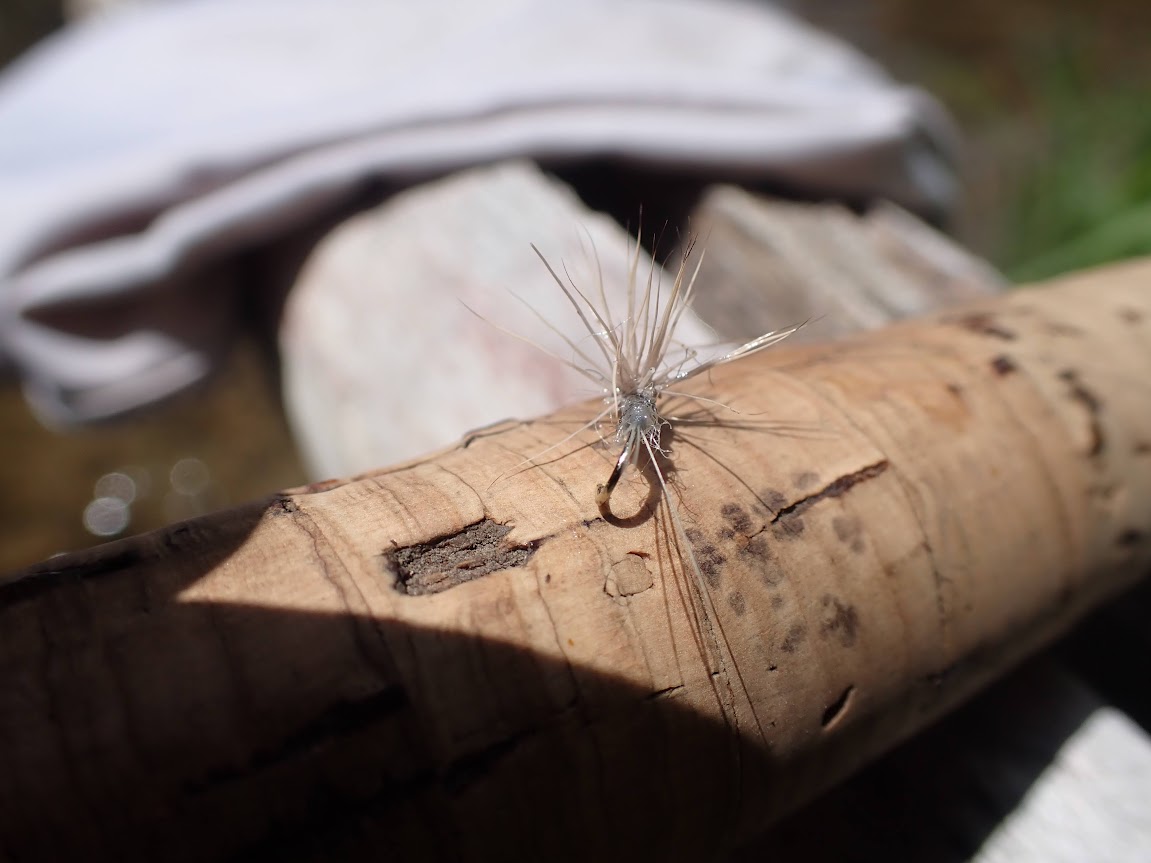 Mashed This Comparadun to Imitate Spinner

As this prospecting took place, I began to observe a smorgasbord of aquatic insects that included golden stoneflies, yellow sallies, pale morning duns, and a couple drakes. The spinner fall subsided, and I decided to institute another fly change. I chose an olive hippie stomper as the front fly and extended a tippet section from the bend and attached a size 12 yellow stimulator. These flies remained on my line until 2:45PM and enabled me to boost the fish count to twenty. Two trout chomped the stomper, and the remainder nabbed the high floating, bushy stimulator. I totally enjoyed myself in a gorgeous environment with clear and cold flows and hungry trout. 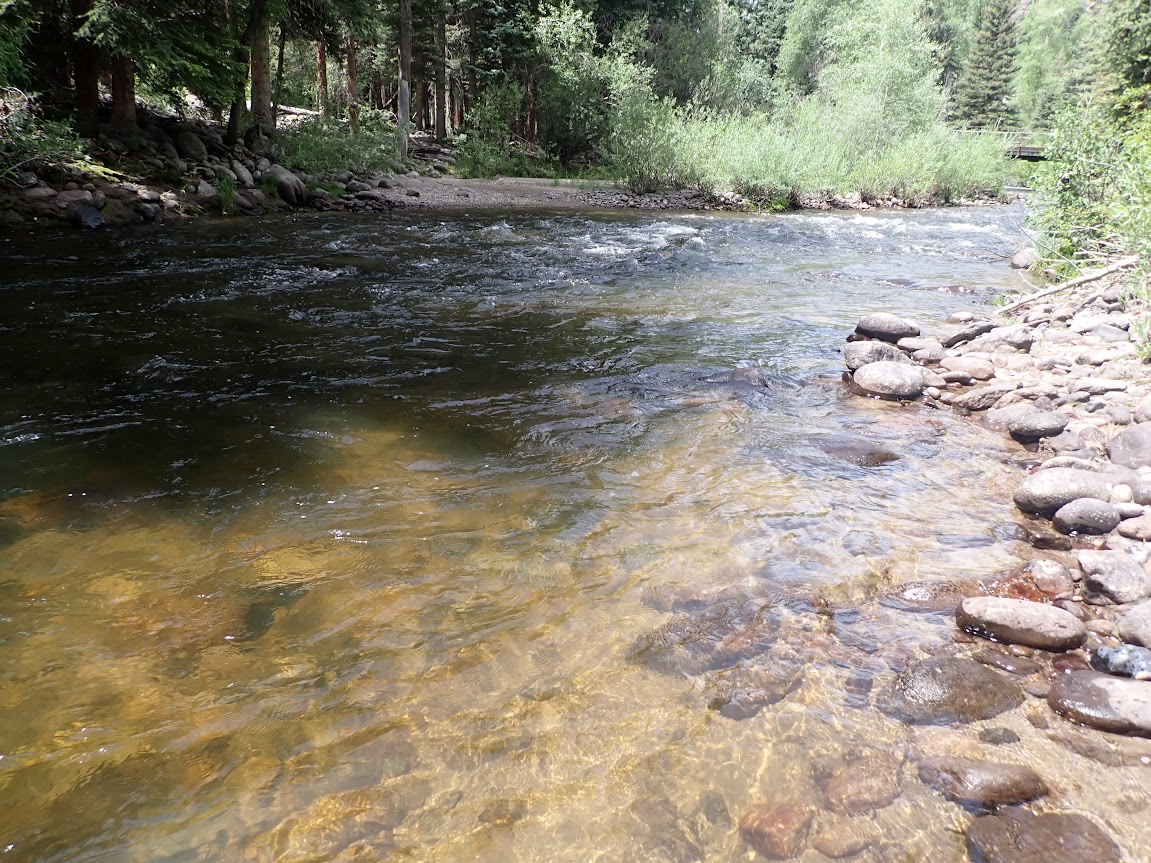 At 2:45PM the catch rate lagged, and I shifted to yet another approach. I tied a size 8 amber ice dub chubby Chernobyl to my tippet and added an iron sally and a salvation nymph. I covered quite a bit of stream real estate, until I approached some faster deep runs that bordered some slow moving deep slots. On one of the drifts through this run, an energized trout snatched one of the nymphs, but after a streaking run, the fish slid free. I was puzzled by this rapid change of events, and I discovered that all three flies were missing. A closer examination of my line revealed a curly end, and I was forced to acknowledge that a bad knot was responsible. 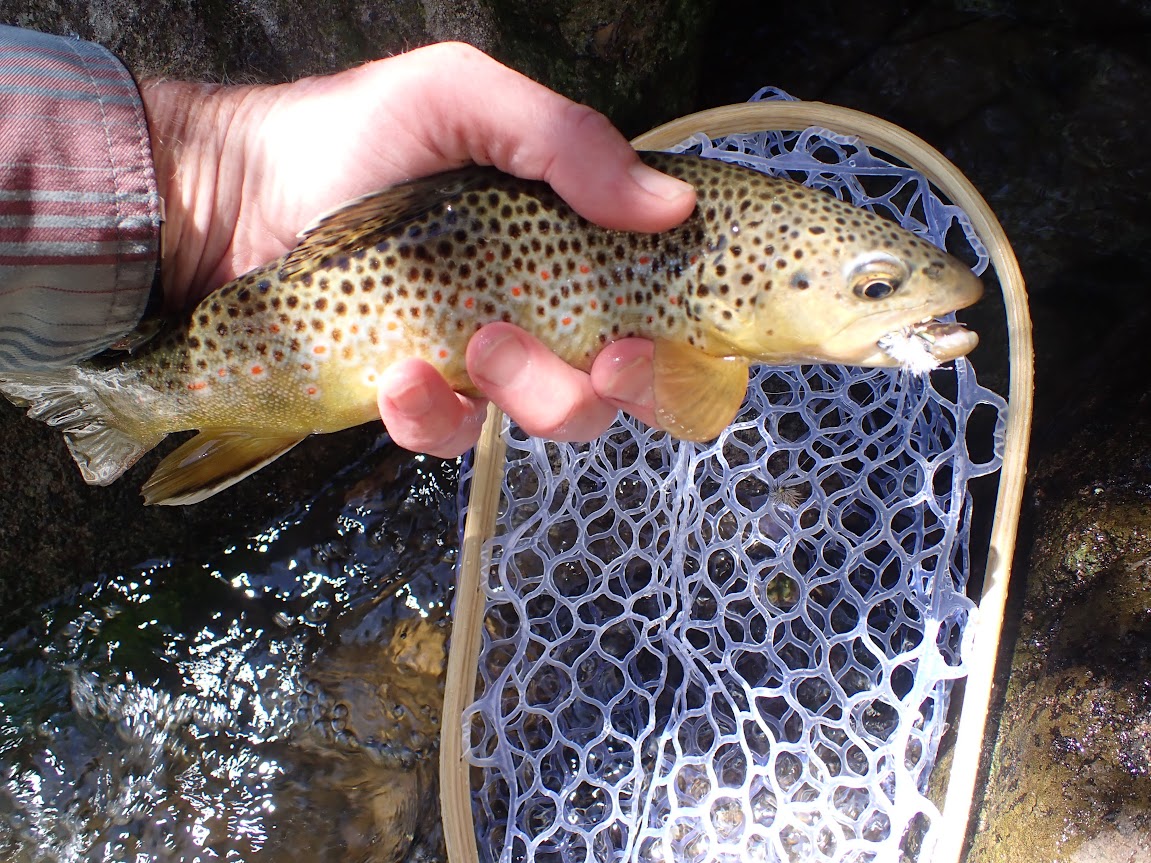 Not wishing to go through the time consuming act of reconfiguring a three fly dry/dropper, I returned to the hippie stomper and yellow stimulator, but I was unable to resurrect the earlier magic. Tuesday was the first day of summer, and I was blessed with a wonderful day of stream fly fishing. I was on a new river for me, and I managed to unlock the code to land twenty fish. All except three were brown trout in the twelve inch range with a couple thirteens in the mix as well. The scenery, the river, and the insects were in perfect condition; and I capitalized.