Location: Between confluence with Middle Fork and Brainard Lake

2020 has been a year of exploring new streams or different stretches of streams never before visited. Tuesday, September 1, would continue this trend. I packed up my gear and headed to the South Fork of St. Vrain Creek. Jane and I completed a hike along this stream a year ago, and it looked like an interesting creek to sample, so Tuesday would be the day.

It was sixty degrees, when I arrived at the trailhead parking lot, and a constant wind created a slight chill, so I opted to pull on a fleece. I knew that I would probably overheat on the inbound hike, but rationalized my decision with the understanding, that I could remove the fleece and tie it around my waist under my waders. I assembled my little Orvis Access four weight and departed along the well worn path. I was in a position to begin fishing by 10:45AM, but after walking at a moderate pace for .6 mile, I realized that I forgot my frontpack. I briefly considered trying to fish without it, but then I realized that my frontpack contains my hemostats, floatant paste, tippet spools, dry shake and fleece nymph wallet. I reluctantly executed a U-turn and returned to the parking lot to retrieve an essential piece of gear. Of course this added 1.2 miles to my hike, and my initial cast was delayed until 11:30. 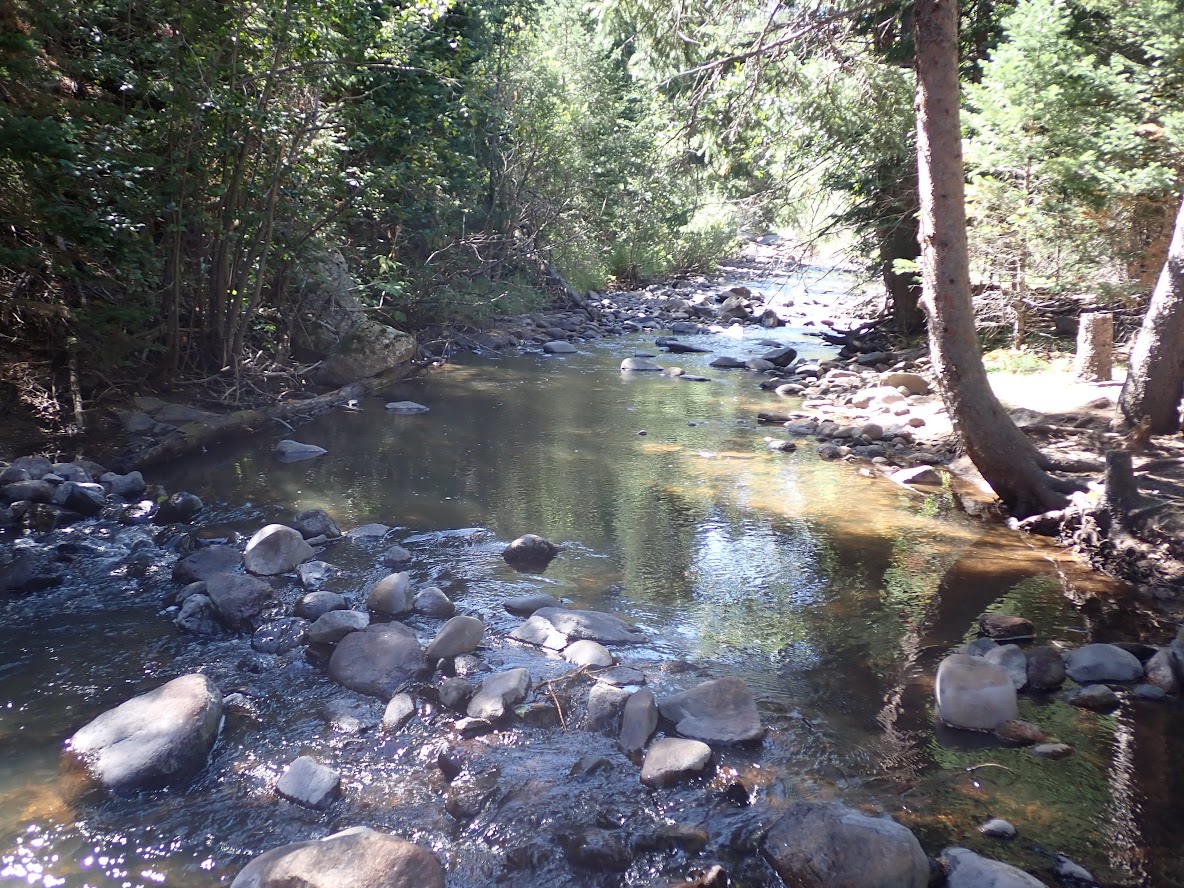 When I finally stood along the edge of the small creek, I noticed that it was a bit off-colored with a green tinge similar to what we observed on Beaver Creek on our hike from Camp Dick the previous Wednesday. Beaver Creek is a significant tributary to the South Fork not too far upstream, so this probably explained the discoloration. In spite of the greenish tinge the stream clarity was decent, and the creek tumbled along at 11 CFS based on my review of the closest DWR water gauge. I quickly concluded that fishing the South Fork would require stealth and caution. 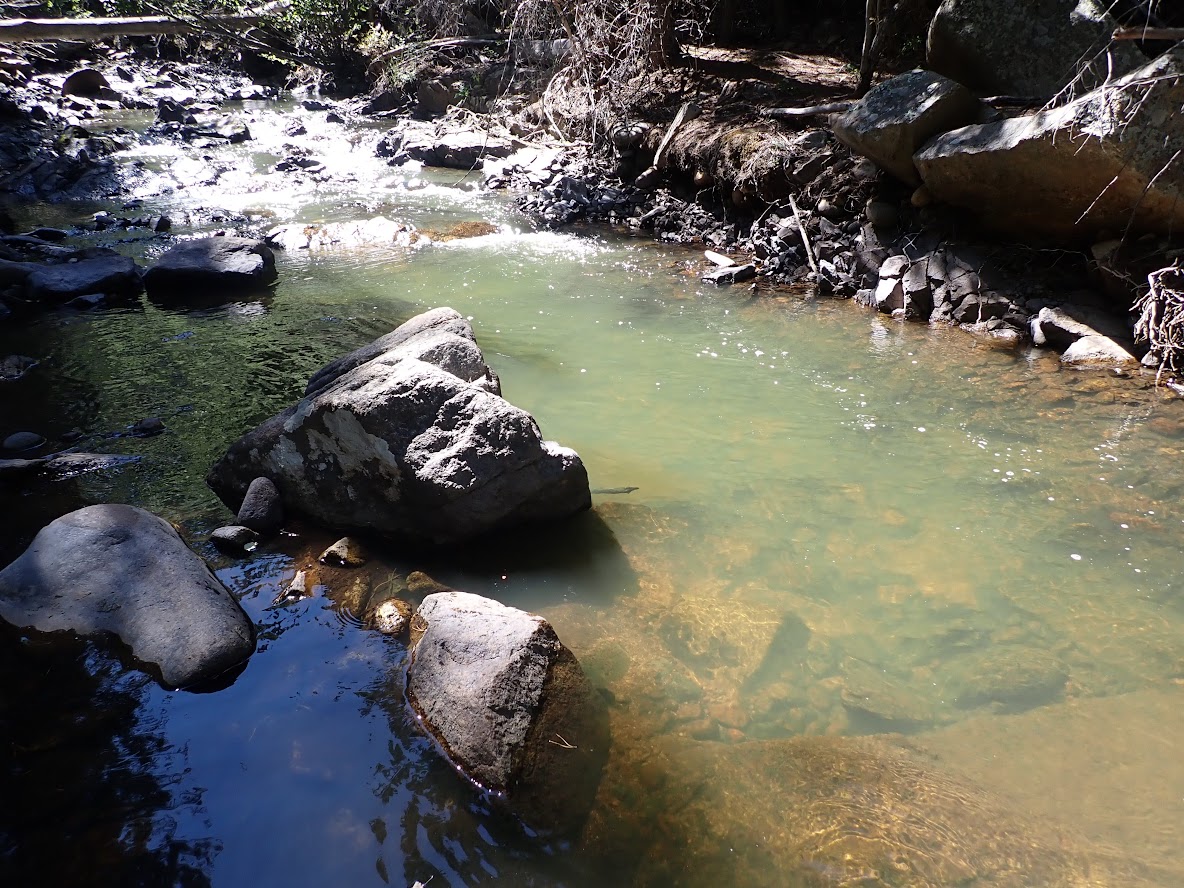 I began my maiden expedition on the South Fork with a solo peacock hippie stomper, and I landed two small brown trout, before I broke for lunch at noon, but the stomper generated a lot of refusals and temporary hookups. It was encouraging to witness the presence of trout in previously unexplored water, but my inability to connect in the early going was frustrating. The first hour of fishing was characterized by a slow catch rate, and I contemplated hiking back to the parking lot to move to another location. Before doing so, however, I added a size 16 olive-brown caddis on an eight inch dropper to the hippie stomper, and this really escalated the pace of action. 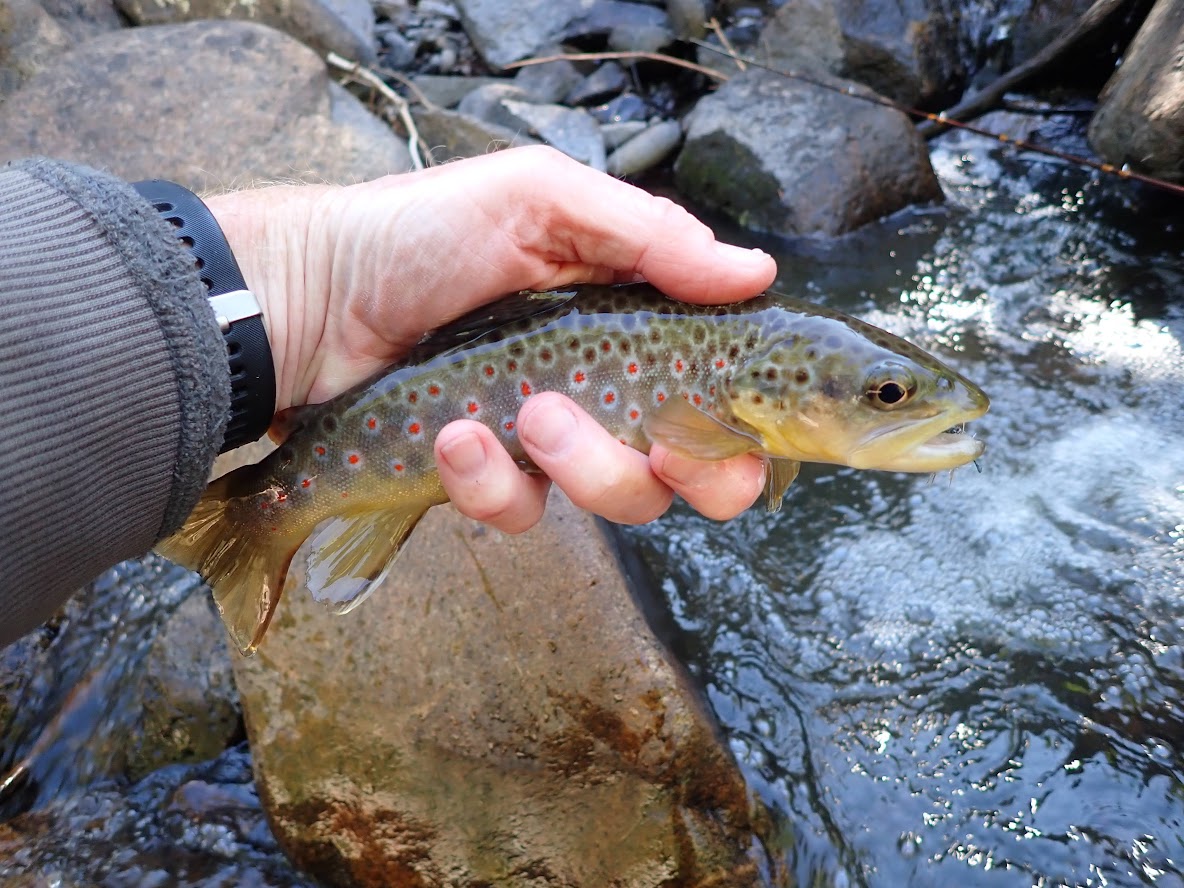 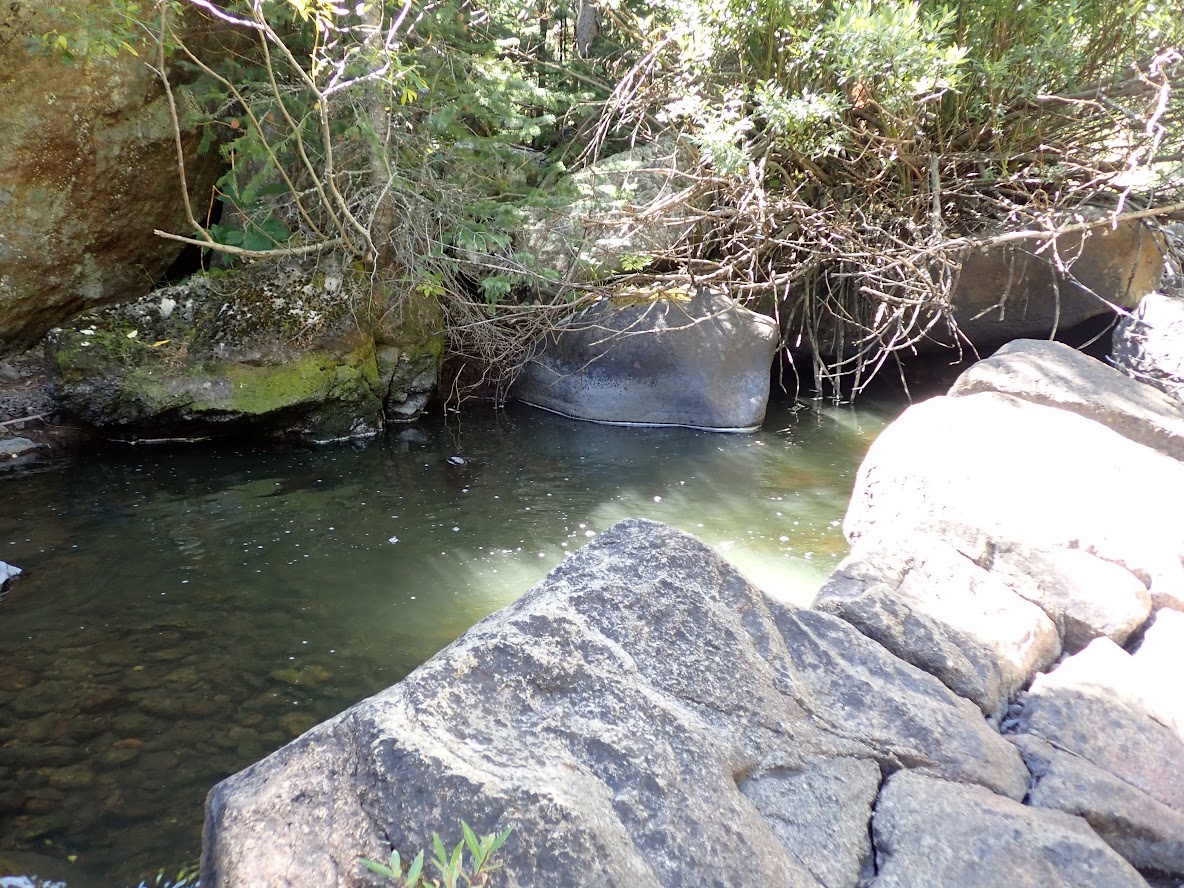 I persisted with the hippie stomper/caddis double dry combination for the remainder of the afternoon and elevated the fish count to twenty-one. Roughly sixty percent of the trout sucked in the caddis, and the other forty percent crushed the hippie stomper. I gradually learned that the shallow flats were a waste of time, as fish scattered in every direction in response to my first cast. Deep slow moving pools were also largely unproductive. Spots with moderate depth and greater current velocity were the producers. I executed quite a bit of dapping and bow and arrow casts, due to the tight quarters and the many deadfalls that partitioned the creek into short sections. Wading was challenging as a result of climbing over the abundant quantity of dead trees that spanned the waterway. 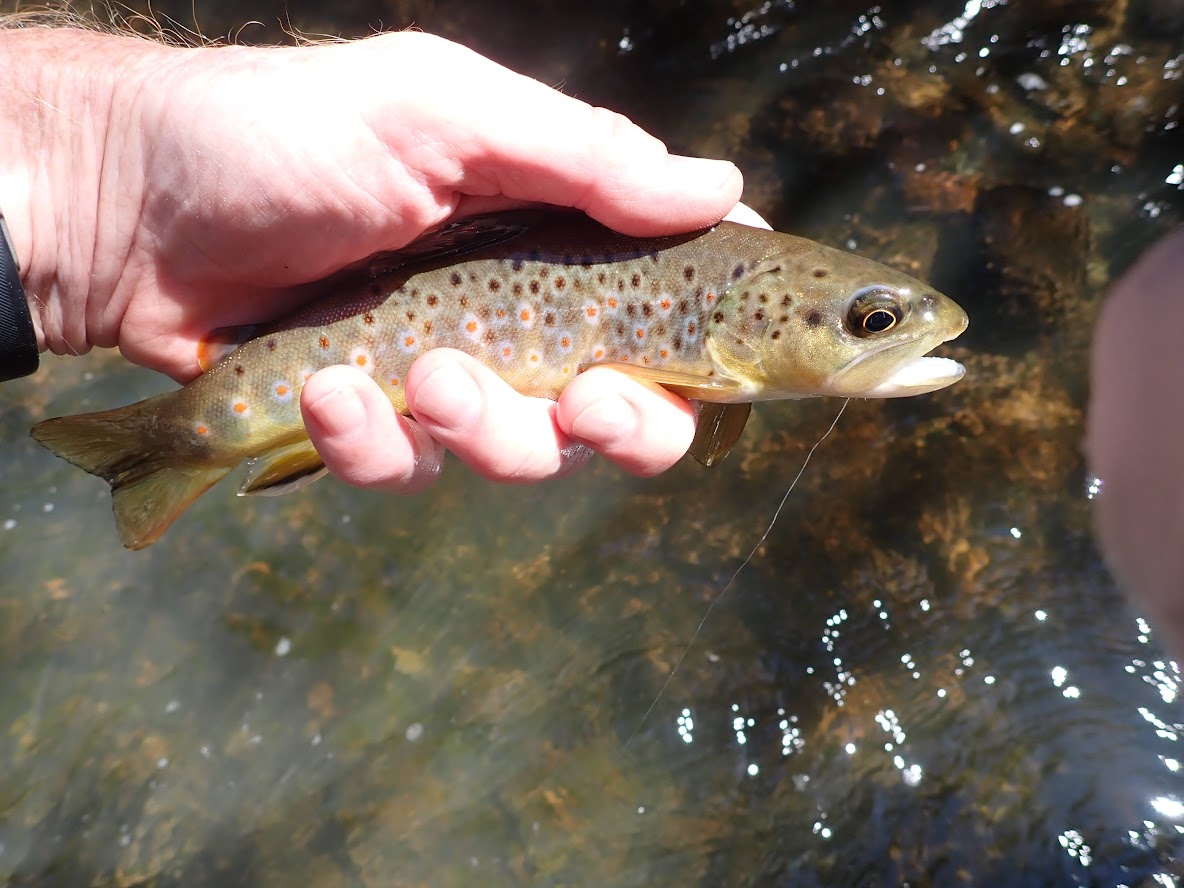 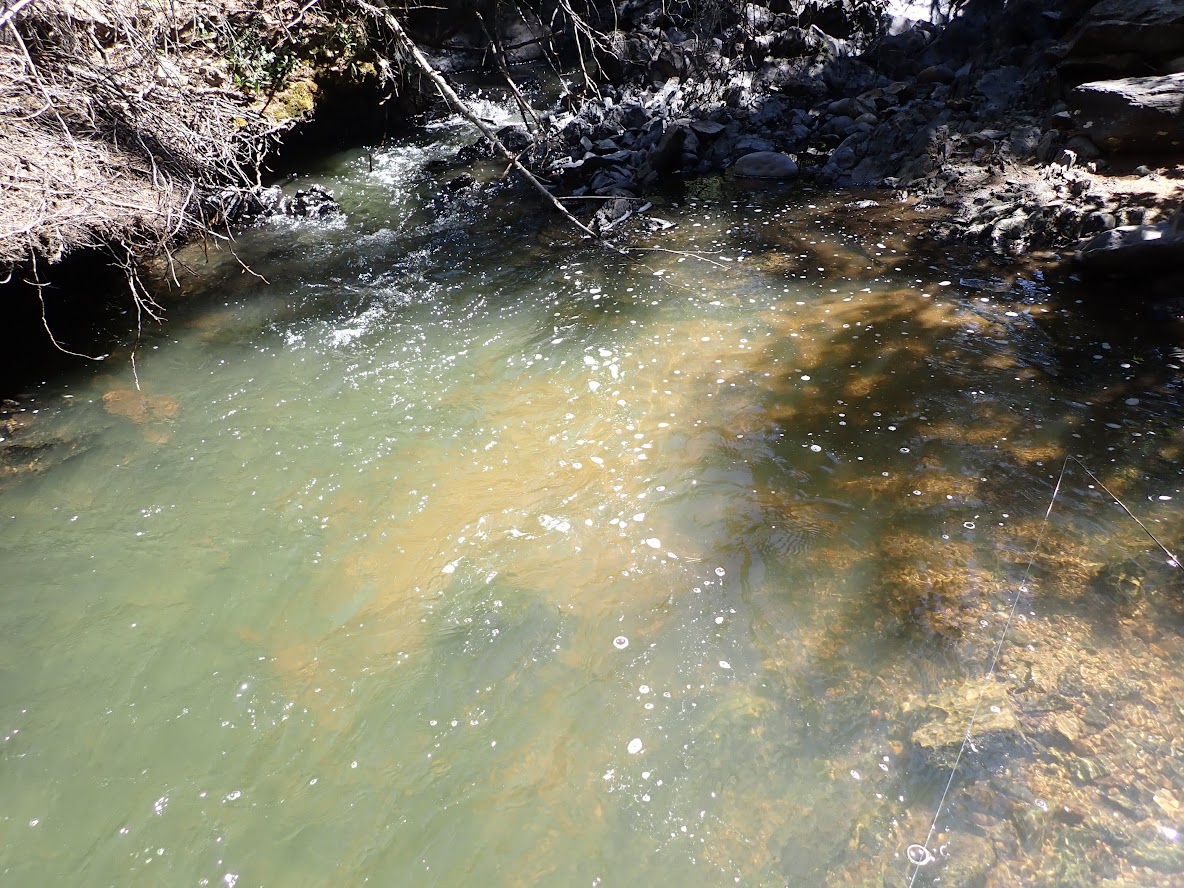 Places next to worn campsites or paths were also largely unproductive, and I suspect this circumstance can be directly attributed to human fishing pressure. I enjoyed my greatest success in sections that were either distant from the path, or the trail was high above the stream, thus creating a significant barrier to access. All twenty-one fish landed were brown trout with the largest extending to eleven inches. It was a day of quantity over quality, but I enjoyed it nonetheless. The low water and tight vegetation made fooling the small browns quite challenging. If you are looking for lunker fish, the South Fork of the St. Vrain is not for you. If you treasure small wild trout in a remote natural environment, then give the South Fork of St. Vrain Creek a try.