A snowstorm swept into Colorado and brought single digit temperatures on October 25 and 26. This circumstance along with cold and wind during the days that followed put my fishing season on hold and caused me to initiate my winter fly tying efforts. The temperatures gradually warmed into highs in the sixties on Saturday and Sunday, and the long range forecast for Monday, November 2 through Friday was very encouraging with highs touching the seventies. This was enough to spur this fisherman to dust off the fly rod. 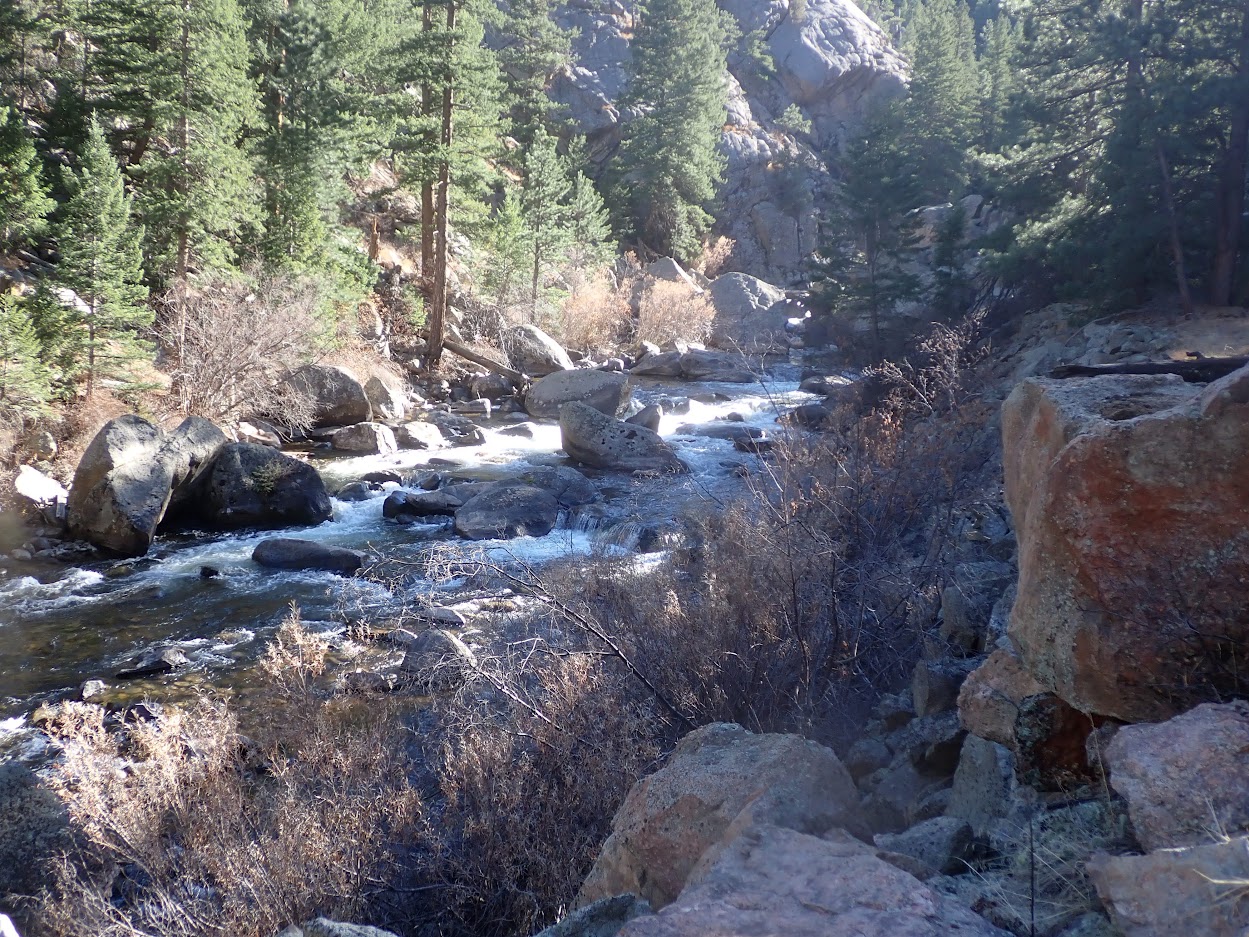 Looking Up the Canyon

On Sunday night I checked the flows on the local streams and noted that South Boulder Creek was maintaining an attractive level of 83 CFS. I was very anxious to pay a visit to the small tailwater northwest of Denver, but the water managers closed the taps to a trickle of 5 CFS for several weeks in October. A nice fall day and manageable flows were all I needed to make the drive to the kayak parking lot high above the creek and near the dam. I assembled my Sage four weight and made the steep descent to the creek which enabled me to begin casting by 10:30AM. 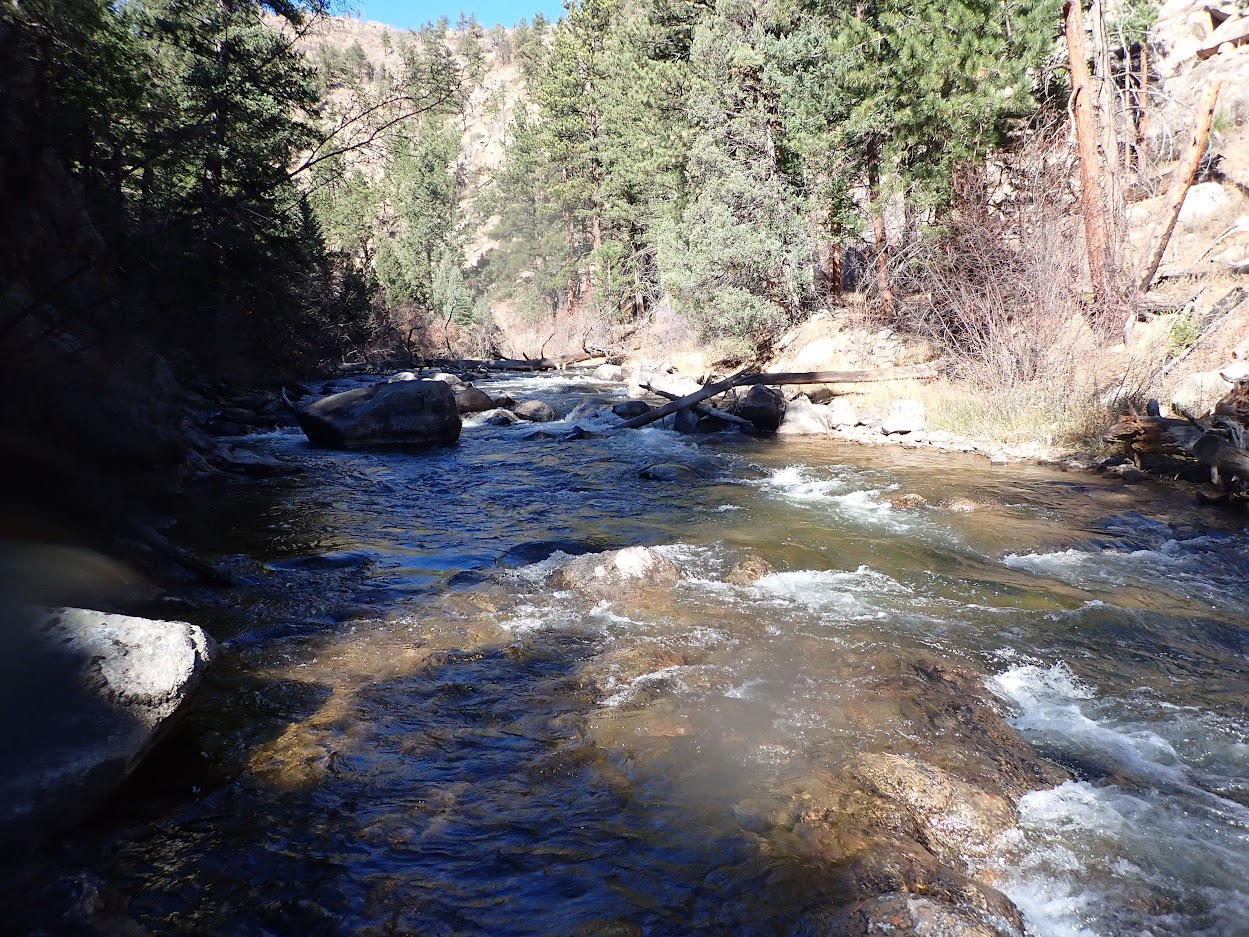 Making Sure of the Focus

I began with a peacock hippie stomper, but other than a brief refusal, surface feeding did not appear to be prevalent. I added a size 14 prince nymph and below it a size 16 beadhead hares ear nymph, and this combination yielded three brown trout. Each fly delivered a trout to my net during this early phase of my day. Before I paused for lunch, I recorded three additional brown trout to boost the fish count to six, and the prince attracted two of the three, while another greedy eater chomped the hippie stomper. 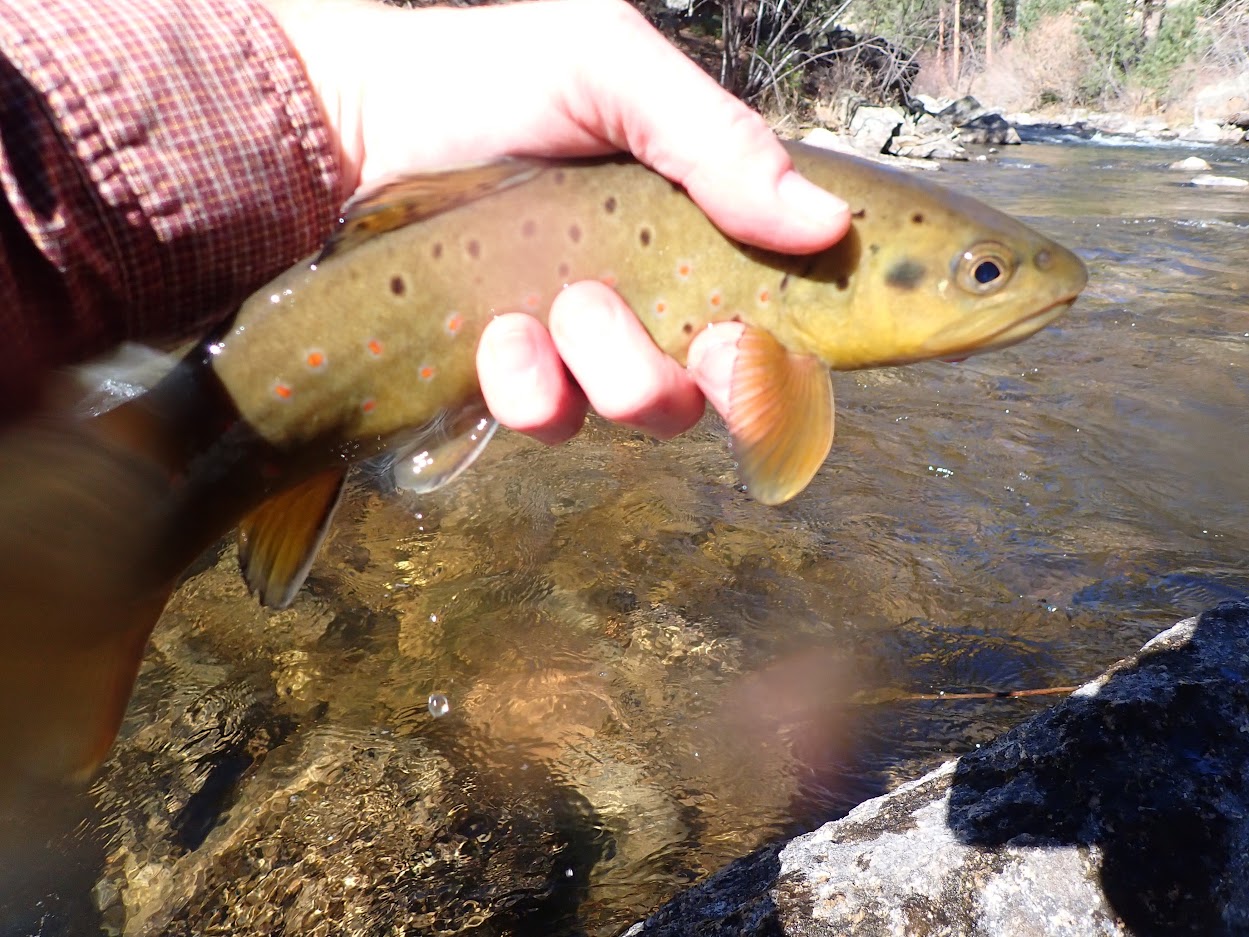 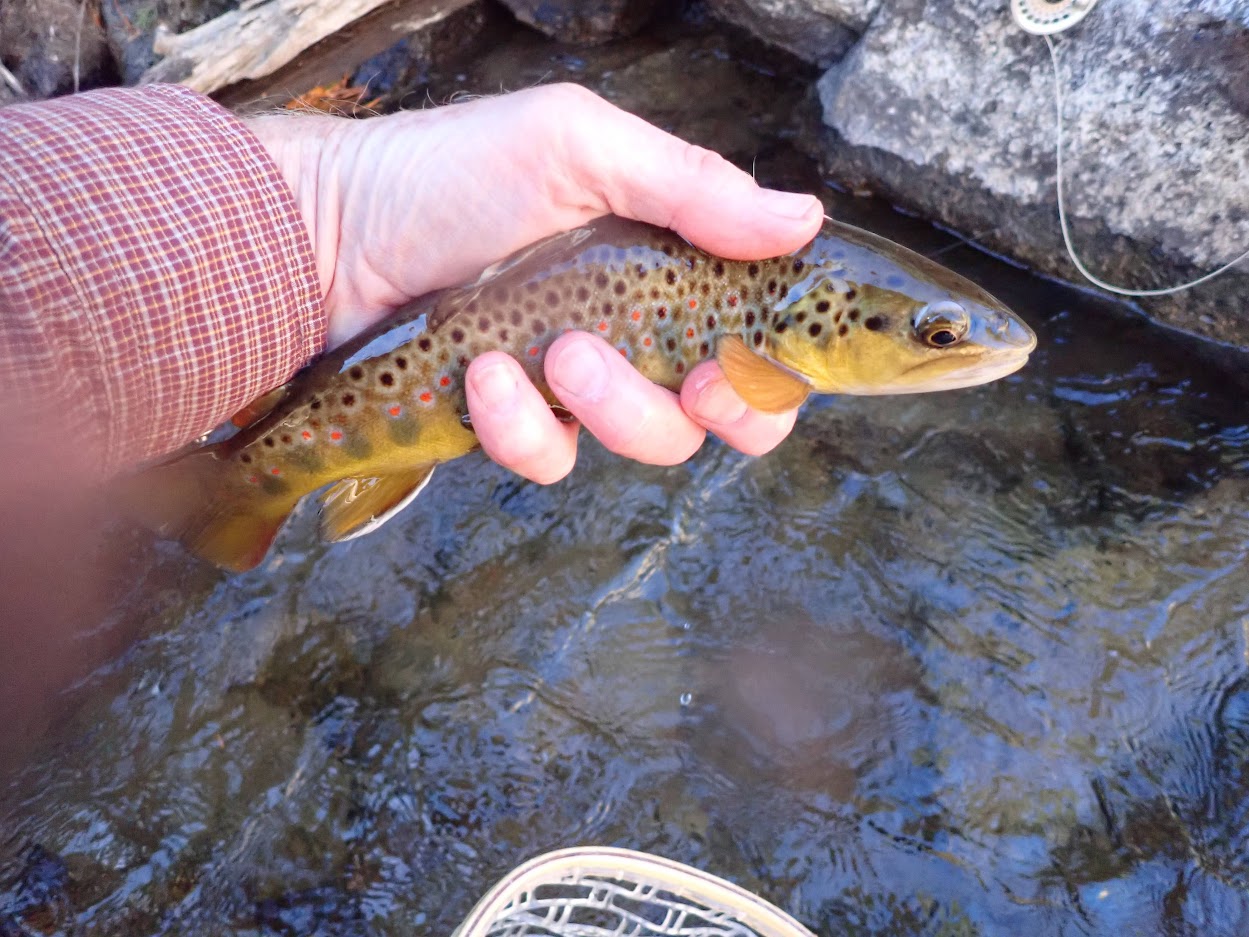 A Second Shot for Good Measure

After lunch I replaced the hares ear with a pheasant tail and eventually a salvation nymph, and the salvation accounted for a single fish, while the prince and hippie stomper chipped in one each. At 1:30 I somehow lost the prince nymph in a tangle that resulted from a landed fish, and I used this pause in action to reconfigure. The shadows covered most of the stream, and the low sun created a glare on the portion of the creek that remained outside the shade. In an effort to improve my tracking capability, I swapped the hippie stomper for a size 8 fat Albert. For the subsurface lineup I introduced a size 16 ultra zug bug and trailed a salvation nymph. The ultra zug bug became a hot commodity, as it registered the final four fish of the afternoon to bring the count to thirteen. 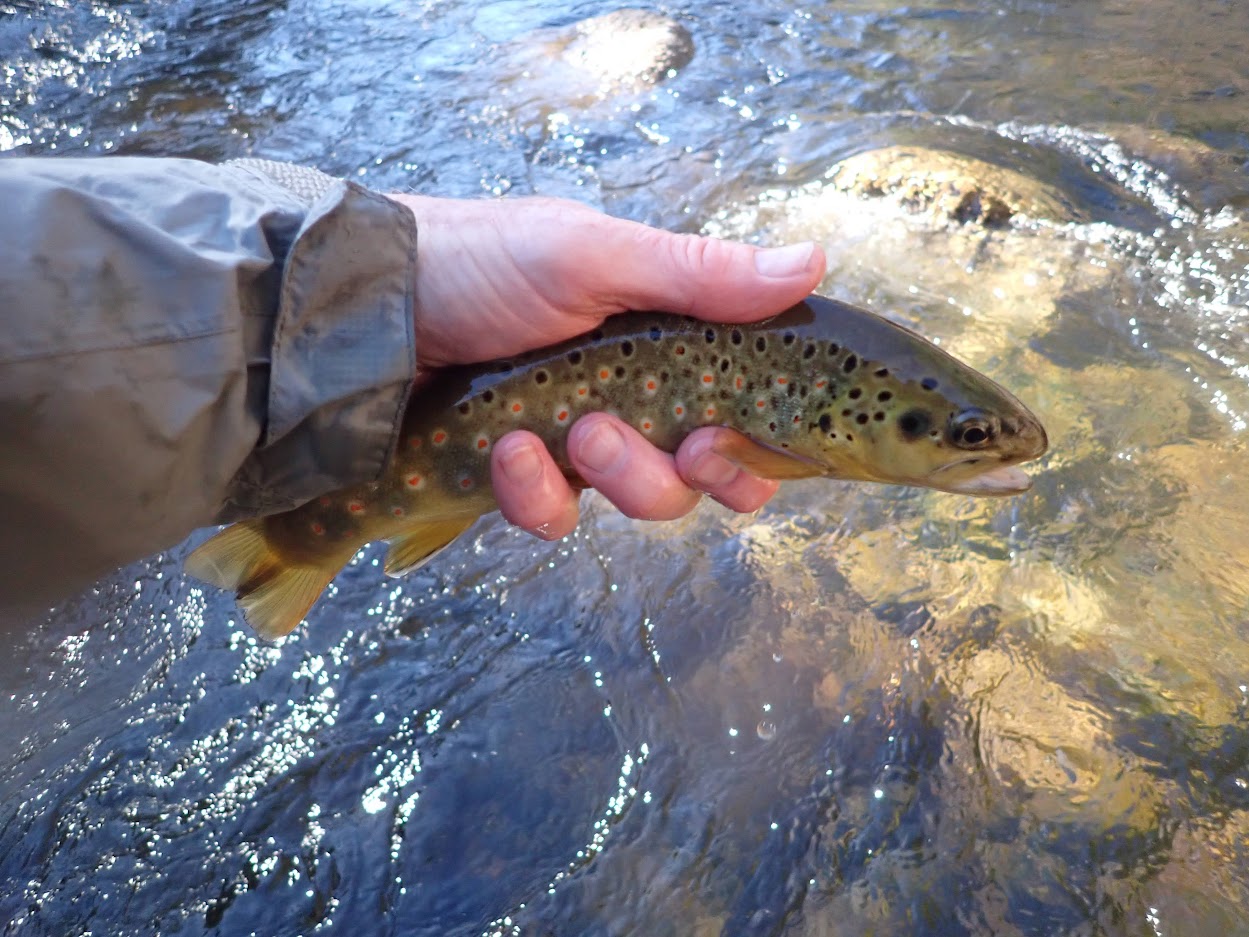 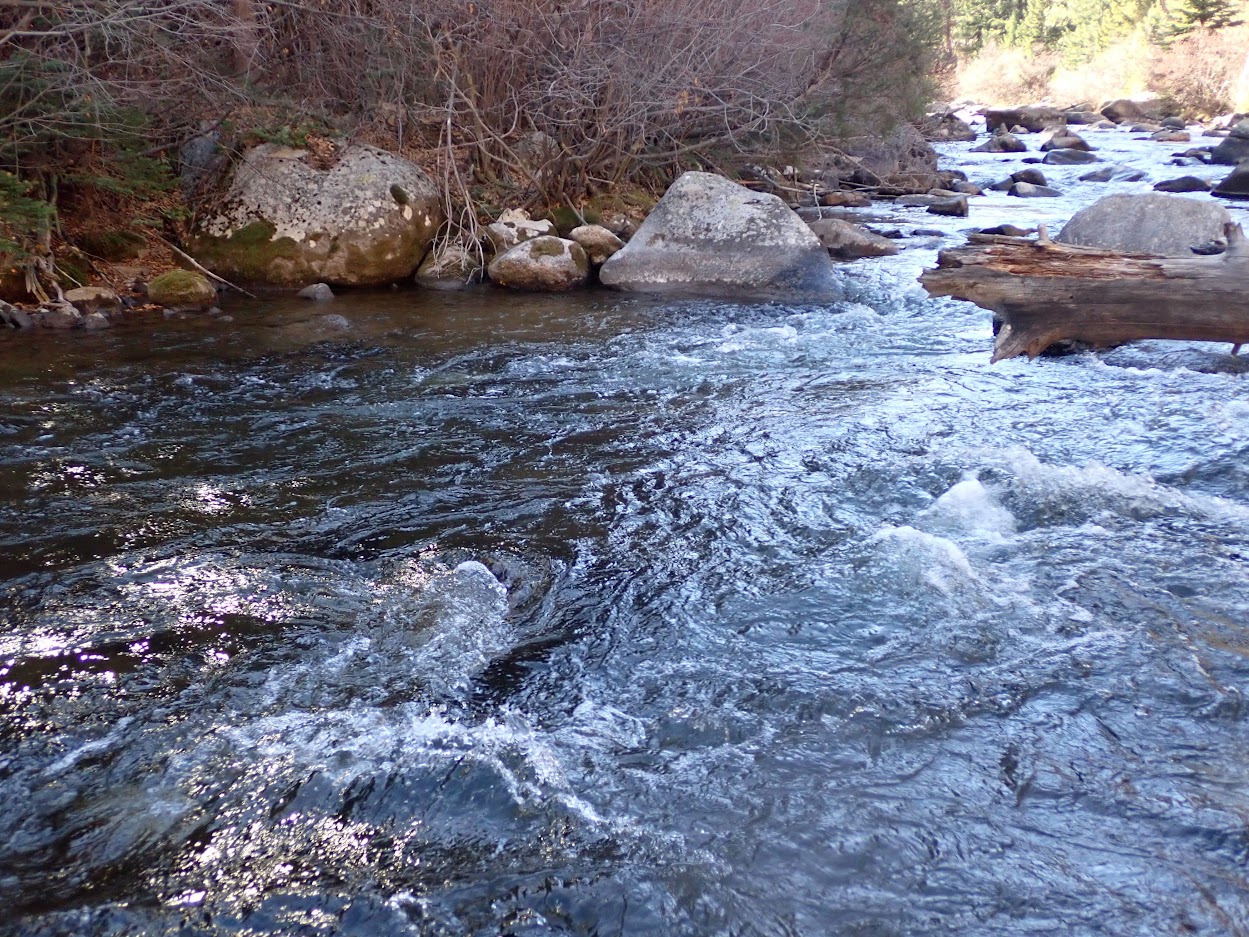 The fishing on Monday was by no means fast action. I covered a significant amount of stream and executed an abundant quantity of casts. Numerous long distance releases and refusals were part of the equation, and the landed fish were definitely on the small side with the largest possibly extending to eleven inches. Nevertheless I was pleased with a double digit day in November. My streak of catching a fish in each month of the calendar year remained alive; however, December will certainly be a challenge for this fair weather angler. I plan to take advantage of the nice fall weather to undertake a few more fishing outings over the remainder of this first week in November.