The weather on Thursday, October 19 was similar to Tuesday on South Boulder Creek, but that is where the similarities end. After a spectacular October outing on Tuesday, I could barely contain my desire to return immediately. Unfortunately on Wednesday I scheduled a minor surgical procedure in the morning, and that event precluded a day of fishing despite a continuing string of pleasant weather. The doctor cautioned me about running or doing activities that raised my blood pressure, but when I asked about walking, he approved. According to my thought process fishing is less strenuous than walking, so I planned another visit to South Boulder Creek.

I arrived at the Kayak parking lot at 9:45 and departed for the stream by 10AM. My Santa Fe was the sole vehicle occupying the lot, so I was assured of having the entire stream to myself for some period of time. The air temperature was 55 degrees, as I rigged my Orvis Access four weight, and I was convinced that the sun would provide enough warmth to allow fishing without an outer layer. Given the lack of competing anglers and in deference to my surgery, I did not hike as far as I did on Tuesday, and this enabled me to wade in the creek with a red hippy stomper on my line by 10:30AM. 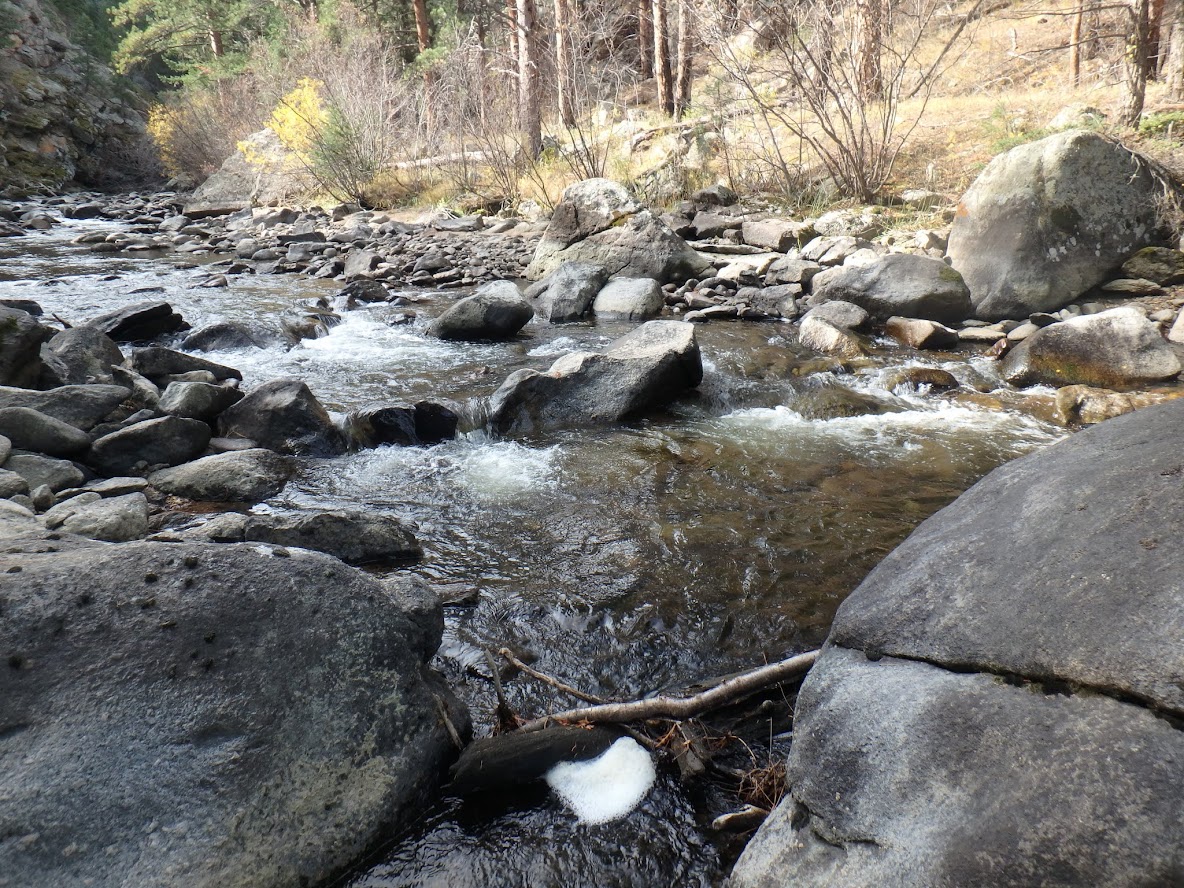 According to the DWR stream flows, South Boulder Creek was trickling from Gross Dam at 9.33 CFS. I find it interesting that Denver Water carries out the flows to two decimal places, when the reading drops to single digits. By comparison the flows on Tuesday were 10.8 CFS. When I decided to make the trip to South Boulder Creek, I discounted the 1.5 CFS change, but now that I stood in the creek, it was apparent that the difference was significant. Fewer deep pools and runs existed for the trout to seek safety from overhead predators. On Tuesday I made long casts to relatively shallow slow moving pools, and as long as I was stealthy and delivered a soft presentation, I experienced some success. On Thursday shallow pools did not produce fish, and I rarely spooked trout, when I  waded through an area that I recently cast to. Most of the alarmed fish bolted from tight cover next to boulders.

The hippy stomper with a bright red body produced two refusals, so I defaulted to a size 10 Jake’s gulp beetle. The large visible beetle induced a couple looks, but the fish decided not to bite, so I switched to a size 16 olive-brown deer hair caddis. Two small brown trout finally rested in my net, after they sipped the caddis along the edge of exposed boulders. I managed to land a small rainbow on the caddis, but then the sparse dry fly lost its allure. The sun rose higher in the southern sky, and this reduced the shadows to the left side of the stream. I decided that the conditions were now conducive to floating and tracking a black parachute ant. I restocked my fly box with five fresh parachute ant imitations before I left the house, so I extracted a size 18 with an orange poly wing post.

I began to shoot long casts to the top of a long wide smooth pool, but initially I was frustrated by two refusals. Finally I fluttered a cast to some slack water along some exposed boulders and a brown trout aggressively crushed the ant. Perhaps the ant would take center stage again similar to Tuesday. As much as I hoped this would be the case, I was forced to realize that ants and beetle were not on the menu on Thursday.

I found a cluster of large flat rocks next to a very attractive pool and paused to consume my small lunch. I was at a standstill at four small trout, and it was quite apparent that Thursday was a much different scenario compared to Tuesday. The lower water made the fish very skittish, and they favored more protected out of the way lies along exposed boulders and under deep frothy water. On Tuesday I simply tossed a black ant to all the obvious holding spots, and in most cases a fish responded. This approach was not productive on Thursday, and I was now mulling alternative tactics. 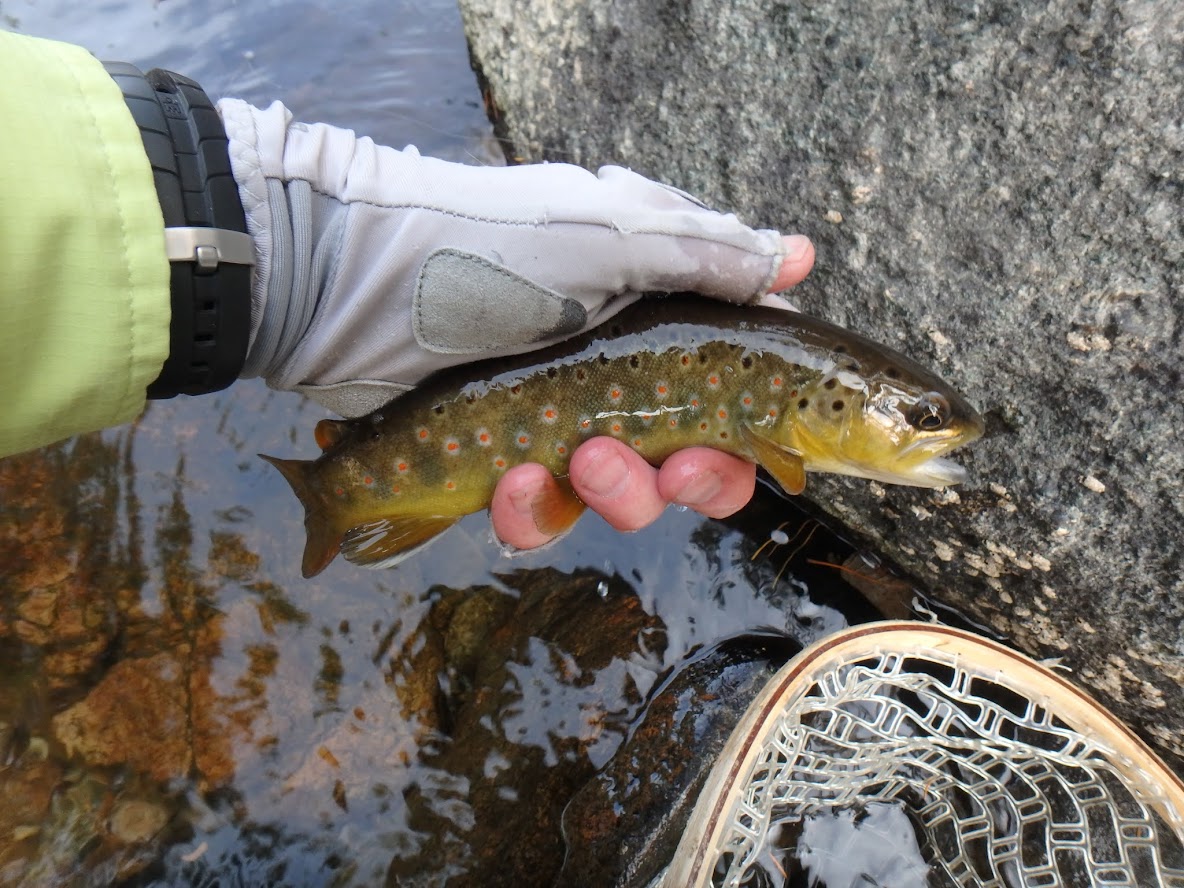 Pretty Brown Trout Gets Me on the Scoreboard

After lunch I began to observe an increased number of small charcoal colored stoneflies. Initially I thought perhaps I could fool the fish with a soft hackle emerger, since it was the same color and comparable size. In order to support the small beadhead wet fly, I knotted a size 12 Jake’s gulp beetle to my line and extended a two foot dropper with a soft hackle emerger from the bend. It was a nice theory, but the fish totally ignored both offerings. After thirty minutes of fruitless casting, I began to observe sporadic rises in a small deep pool. I could see two of the feeding trout, and they paid no attention to my flies, so I removed and replaced them with a size 18 olive-brown stonefly. I tied quite a few of these several years ago, when I encountered a similar small black stonefly hatch on South Boulder Creek.

The tiny earth toned fly was very difficult to follow in the riffles and glare, and the fish seemed to ignore it. The stoneflies were clearly the most prevalent aquatic insect, but I also spotted a few blue winged olives. Perhaps the stoneflies remained airborne and unavailable to the trout, while the blue winged olives were more accessible, as they made their emergence? I had nothing to lose, so I swapped the stonefly for a size 24 CDC BWO. On the second cast one of the visible brown trout darted a foot from its holding location to grab the CDC BWO. I was both shocked and pleased by this sudden turn of events. I moved on to another pool and duped a second brown trout with the CDC blue winged olive, but then the small mayfly lost its magic, and I grew weary of trying to track the minuscule tuft of CDC in difficult lighting conditions. 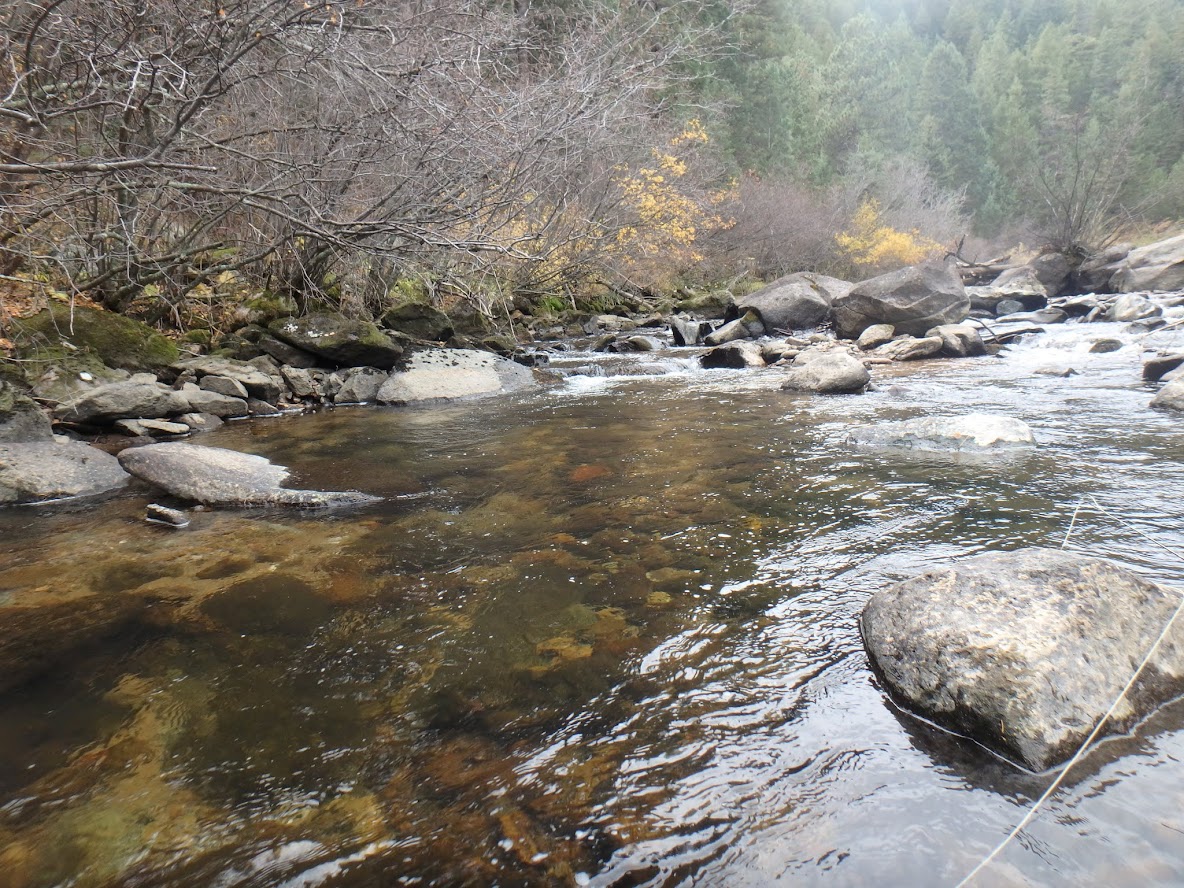 What next? I refused to eliminate the possibility that the trout were feeding on the small stoneflies. I decided to try a size sixteen olive-brown deer hair caddis again. These imitations were a bit large for the stoneflies, but they possessed the same profile and color scheme. The ploy kind of worked. As I approached attractive pools, I tossed the caddis upstream, and in many cases the hackled pattern provoked a refusal. This enabled me to pinpoint the location of the target trout, and I quickly switched the caddis for one of the size 18 stoneflies with a charcoal sculpin wool wing and and olive-brown body. In three instances this bait and switch pattern yielded a brown trout. Clearly this was not the mindless exercise of Tuesday, but I found a way to elevate the fish count toward double digits.

I was now perched on nine fish, and the refusal generating adult caddis was on the end of my line. It was after three o’clock, and nearly the entire creek was covered with shadows. The trout of South Boulder Creek tossed me another curve, but this time it was fortuitous. Apparently the waning light provoked adult caddis activity, because the heretofore refused caddis suddenly became a popular food source. Over the last hour I ratcheted the fish count from nine to sixteen as brown trout suddenly relished the hair wing caddis. I covered a lot of stream and fired the caddis to all the likely trout havens, and the catch rate accelerated appreciably. Hot spots were deep runs that bordered large boulders. 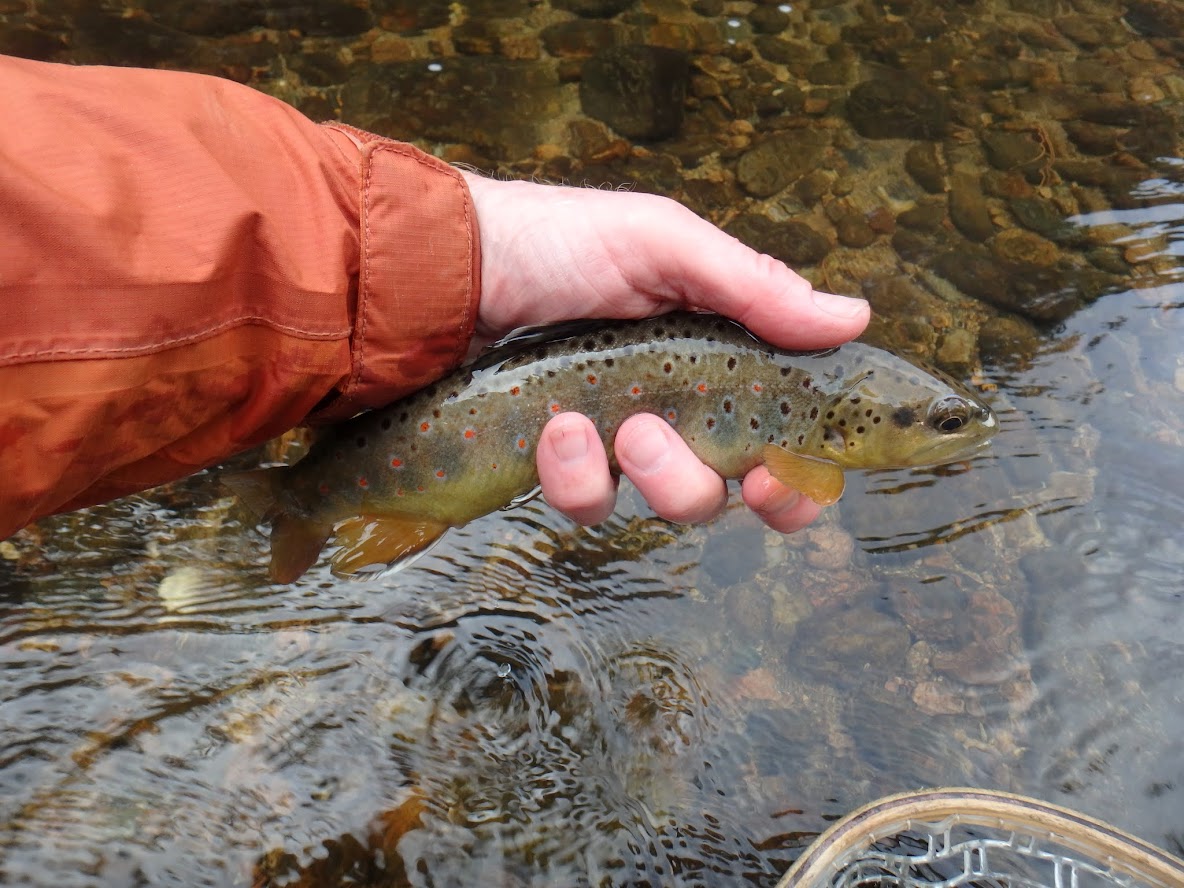 One of the Better Fish of the Day

As I mentioned at the outset, Thursday was a very different day from Tuesday in spite of the similar weather. The flows were 1.5 CFS lower, and initially I discounted this as insignificant, but it was not. I fished a different section of the stream, and I suspect this was also a factor that caused more challenging fishing conditions. Despite the demanding conditions I managed to land sixteen fish. Trying to solve the riddle was all absorbing and in many ways more therapeutic than the easy ant tossing that I enjoyed earlier in the week. I developed numerous theories on what might fool the wary inhabitants of the small tailwater, and eventually I experienced some level of success. In all likelihood I will not return to South Boulder Creek until the water managers elevate the flows.