My day on South Boulder Creek was a rare justification for carrying a ridiculous number of flies on western streams, but more on that at the end of this post. I returned from my 50th high school reunion on Sunday, and a physical therapy appointment precluded fly fishing on Monday, so I was quite anxious to visit a local stream on October 15. The weather forecast projected cooler high temperatures of 66 degrees on Monday, and this translated to mid-fifties in the mountains. I scanned the DWR graphs for Front Range streams, and upon seeing flows of 88 CFS on South Boulder Creek, I designated the small tailwater as my destination.

I arrived at the upper parking lot by 9:40, and I was the first vehicle to claim a space. A car and truck arrived, while I assembled my Orvis Access four weight, but I departed before them. The air temperature was 39 degrees on the dashboard, when I parked, so I slipped on my UnderArmour long sleeve insulated undershirt and wrapped my North Face light down coat around my waist inside my waders. I exchanged my wide brimmed hat for a New Zealand billed cap with ear flaps, and I wore the flaps down throughout my tenure on the creek. 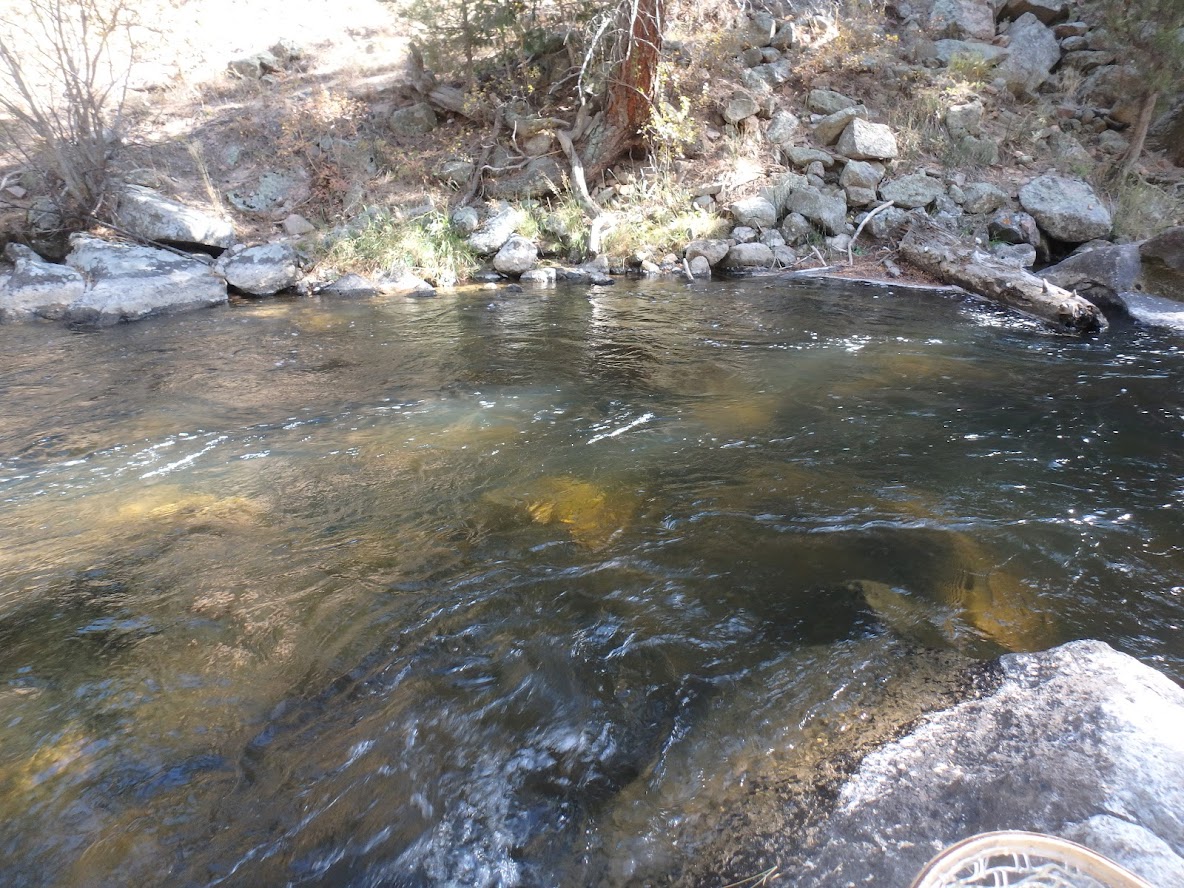 Home to the Crimson Rainbow

By 11AM I was positioned in the creek, and I began with a single peacock hippie stomper. The attractor dry fly failed to generate interest in the first three pockets, and I knew they contained trout, so I stripped in the foam fly and added a beadhead hares ear nymph and salvation nymph. With the three fly dry/dropper combination I connected with an absolutely stunning thirteen inch rainbow in a deep run along the north bank. In a short amount of time I hooked and landed two additional brown trout to boost the fish count to three. 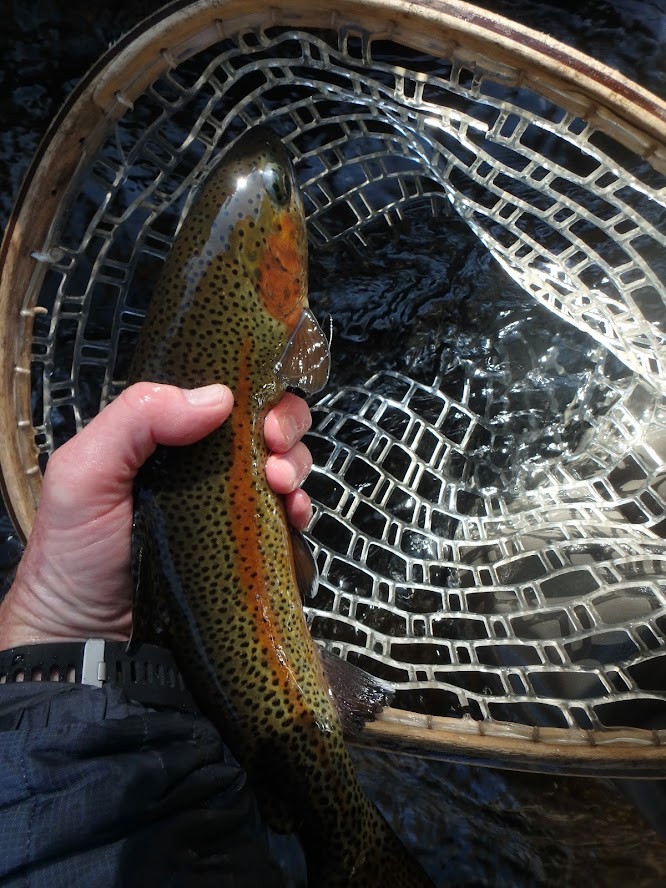 These three flies served as my main offerings for the morning and early afternoon, and they produced trout at a fairly steady rate. I progressed upstream and prospected the likely pockets, deep runs and moderate riffles. By two o’clock I began to see sporadic rises, while I also observed small mayflies, as they hovered above the creek and slowly ascended like a rising hot air balloon. I lost two hares ear and salvation combinations to bad knots, and as I replaced the second pair, I moved the salvation to the top position and replaced the hares ear with a beadhead soft hackle emerger. 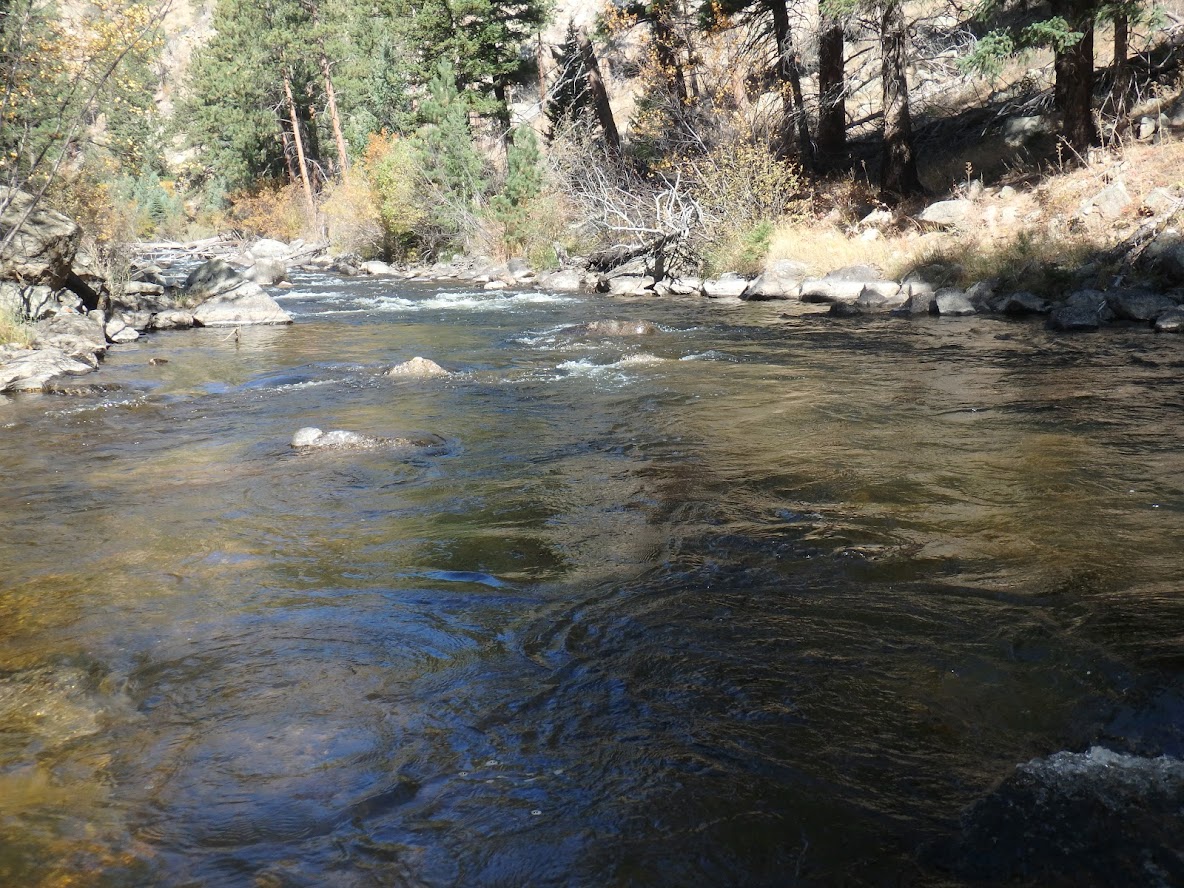 By 2:30 the shadows lengthened across much of the stream, and this challenged my ability to track the hippie stomper, so I swapped the top fly for a tan pool toy. This exchange was purely driven by my need for better visibility. As three o’clock approached, my fish tally rested at twenty-six, and I was quite pleased with my day on South Boulder Creek. I estimated that eight trout opted for the salvation, four nipped the soft hackle emerger and the remainder (14) crushed the hippie stomper. The trendy foam attractor was not perfect, as it also instigated quite a few refusals, but it was easily the most popular fly. I debated testing a Jake’s gulp beetle, but the catch rate was steady enough to ward off experimentation. The soft hackle emerger was popular on the lift and swing as expected with baetis activity in progress. 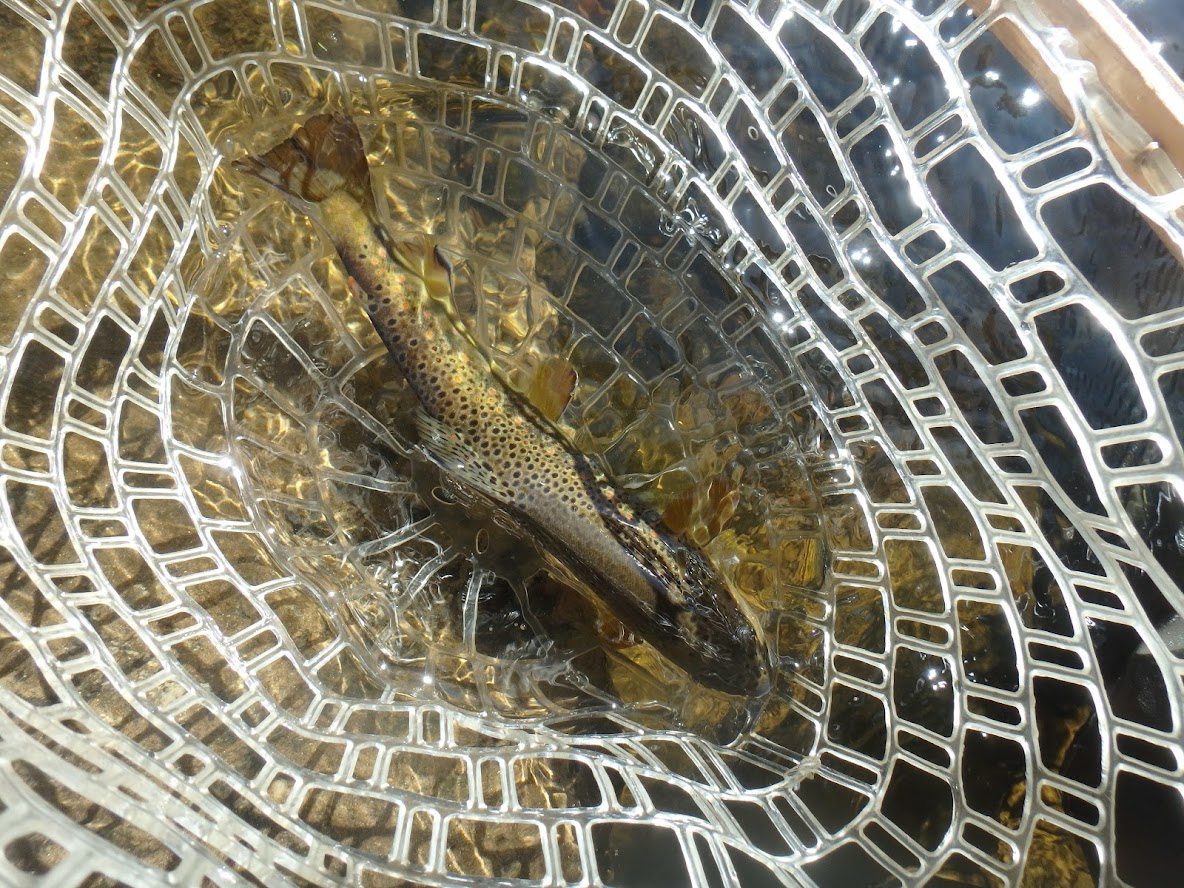 I exited the creek at 2:45PM and climbed to the path and began my return hike. When I reached my favorite large pool; however, I paused my Garmin walking activity tracker, and angled to the downstream tailout below the pool. I paused to observe for a few minutes, and I was encouraged to ready my fly for action, when I spotted a pair of sporadic rises. I scanned the water, but I was unable to notice any food on the surface, although mayflies of various sizes drifted above the stream. I took an educated guess and tied a size 16 light gray comparadun to my line, and it immediately became an item of interest, but not compelling enough to eat. 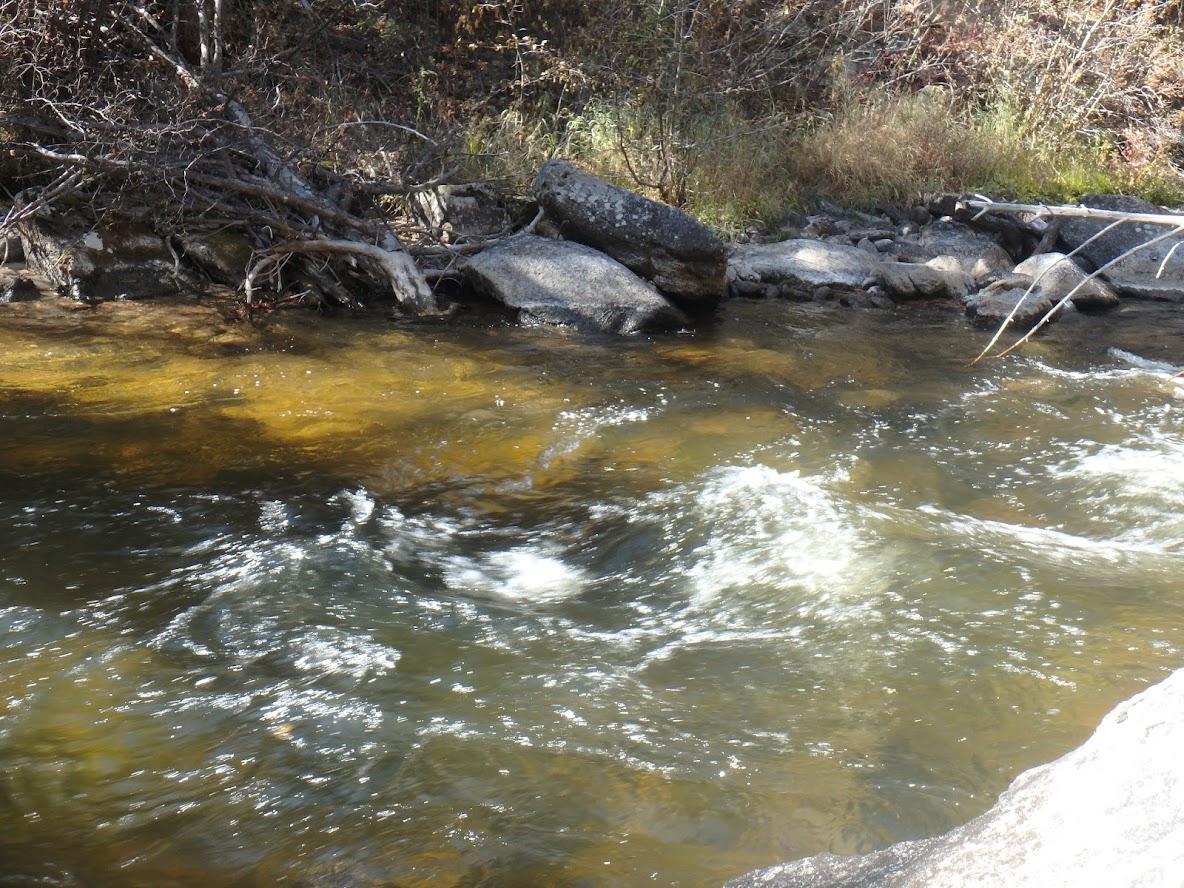 I was frustrated by this turn of events, but I was confident that I could find the fly that matched the resident trouts’ appetite. Blue winged olives seemed to be a likely candidate for imitation, so I knotted a size 22 CDC olive to my line. Once again refusals and a couple split second connections ruled, so I made yet another switch. In previous years I encountered late season pale morning duns, so I tied a size 18 cinnamon comparadun to my line, but the same scenario unfolded. I considered surrendering to the picky pool inhabitants, but then I spotted a pair of relatively large mayflies with light yellowish bodies. They attempted to free themselves from the surface film, but bounced back and forth between the air and water, as they struggled to become airborne. Could these be the tasty snack that elicited sporadic rises from the trout in front of me? 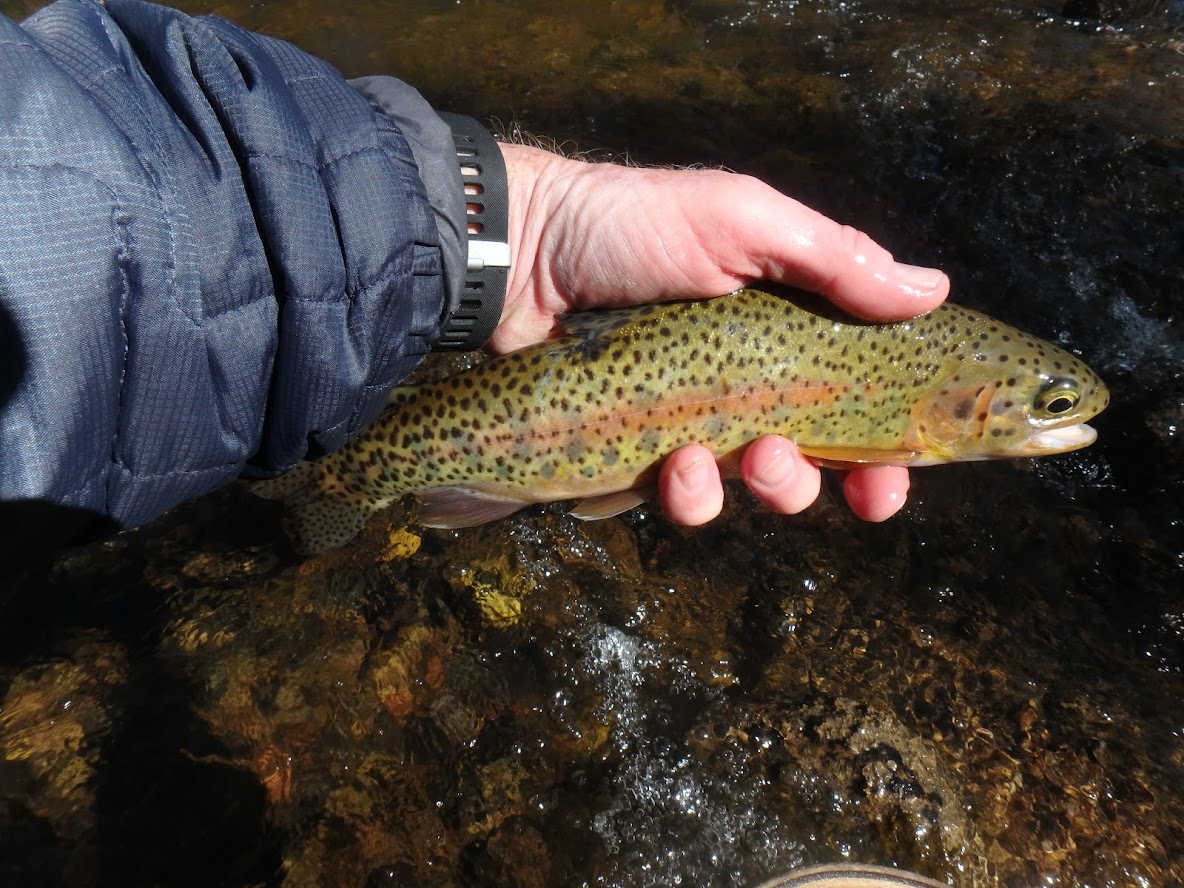 My What Spots You Have

I flipped open my fly box and scanned my options. Tucked on the right hand side were five size fourteen sulfur comparaduns with light yellow bodies. I surmised that they might be the answer to the puzzle, and I knotted one to my tippet. I applied floatant to the body and preened the wing, so it stood in an erect position and then fluttered a cast across from my position. As the relatively large mayfly imitation floated toward the tail of the pool, a mouth appeared, and it was not tentative, as it slurped the comparadun. I quickly reacted with a hook set and encouraged a twelve inch brown trout into my net. Catching a nice wild trout on a dry fly after four fly changes was very gratifying. 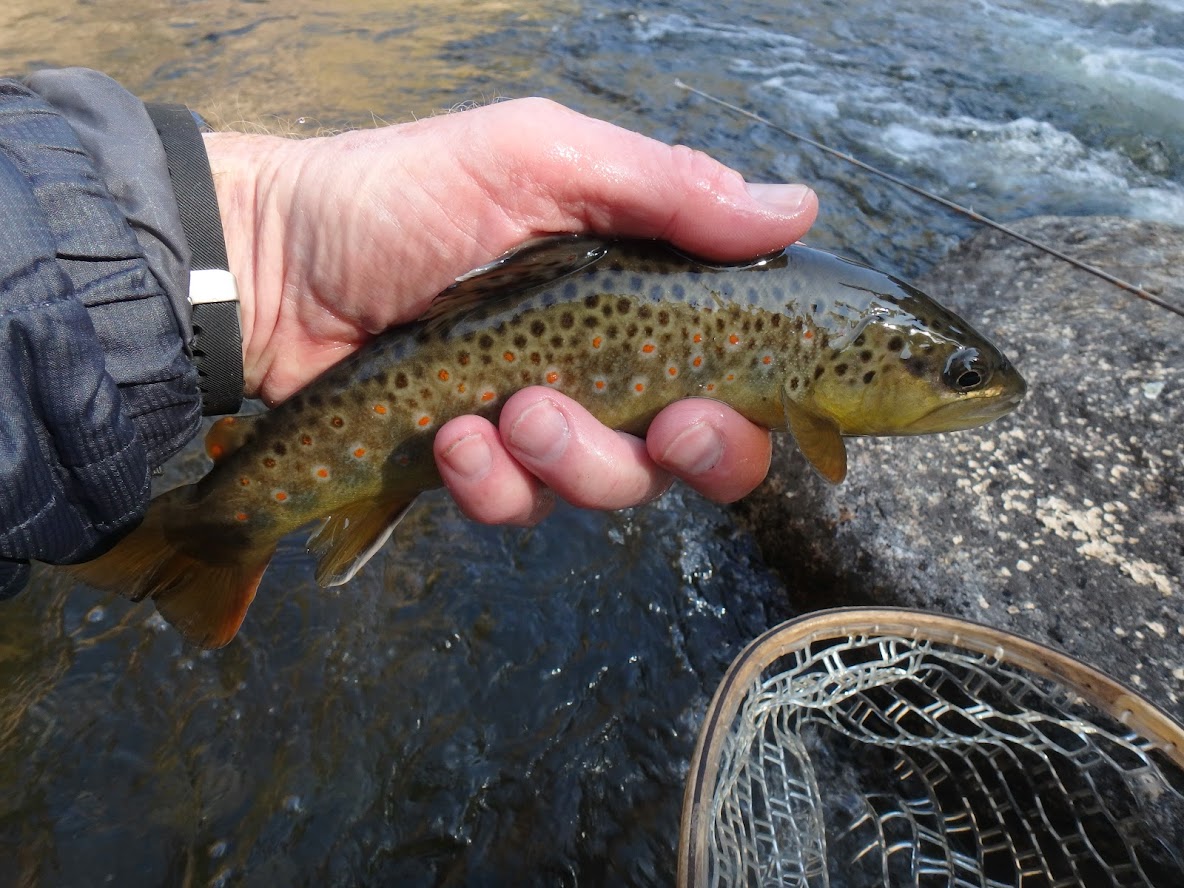 But fish continued to rise, so I sopped up the moisture and dipped the comparadun in my dry shake canister. Two fish rose in the shelf pool on the right, and I turned my attention to these targets. A pair of nice runs angled into the shelf pool from the right side of a large boulder, and the trout hid in the riffles created by the entering run. I lobbed a cast to the deep run on the left, and a fish darted up and nipped the fly. I set quickly but only managed to nick the assailant.

Next I turned my attention to the right most run. This fish had not fed for five minutes, so I was not certain it maintained its feeding positoin, but I dropped a cast to the left seam nonetheless. Whack! A trout crushed the low floating mayfly imitation with confidence, and I was attached to a streaking bullet. The hungry and now angry trout, streaked repeatedly in multiple directions, but eventually I applied side pressure and slipped my net beneath a gorgeous rainbow trout. The glistening finned creature displayed a wide crimson stripe, and I estimated its length to be fifteen inches. This may have been my personal record landed trout from South Boulder Creek. 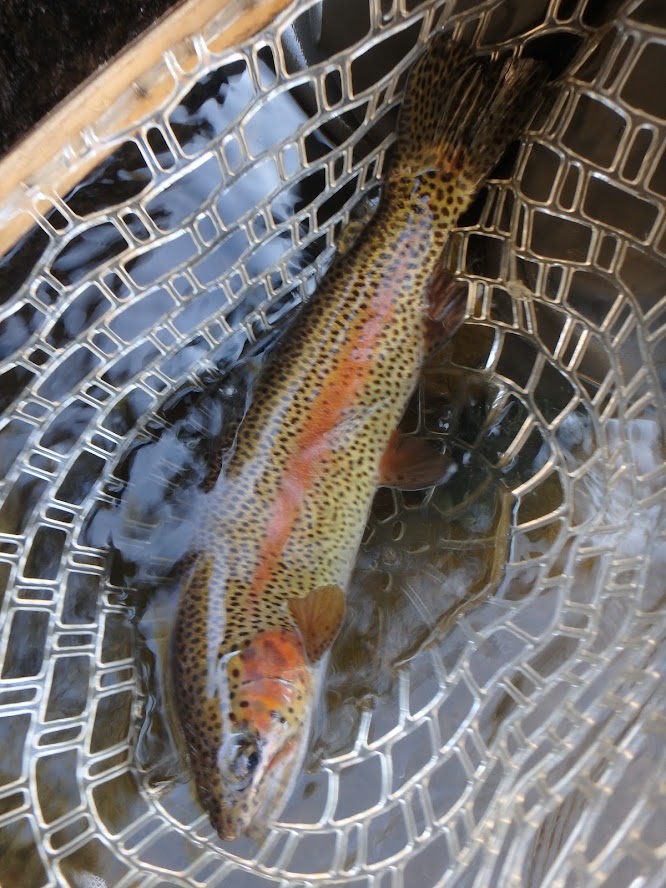 I continued casting the size 14 comparadun in the pool for another ten minutes, and I experienced two more temporary connections, before I hooked the fly in a rod guide and resumed my return hike. I stopped at one more quality pool and fooled a small rainbow trout on the sulfur comparadun, before I quit for good and hiked back to the parking lot.

Twenty-nine trout on October 15 was a quality outing. The temperature never rose above the mid-fifties, but I was reasonably comfortable in my light down coat. Landing two very respectable trout on a seldom used sulfur comparadun imitation was icing on the cake on a cool autumn day. Perhaps I am justified in carrying classic Pennsylvania flies in my fly box, as I wander about western streams.