After two very successful days on South Boulder Creek in early August, I yearned to return in order to take advantage of the late green drake hatch on the small front range tailwater. Unfortunately the Denver Water managers had other ideas, and they boosted the flow rate from 140 CFS to 230 CFS. As you might imagine, 230 CFS in the narrow tight South Boulder Creek canyon creates some challenging fishing conditions. I decided to bide my time and wait for the flows to drop to more favorable levels, while I sampled other high country options in Colorado. Finally I noted that the DWR graph depicted outflows from Gross Reservoir of 139 CFS, and I promptly made plans to pay the canyon tailwater a visit. 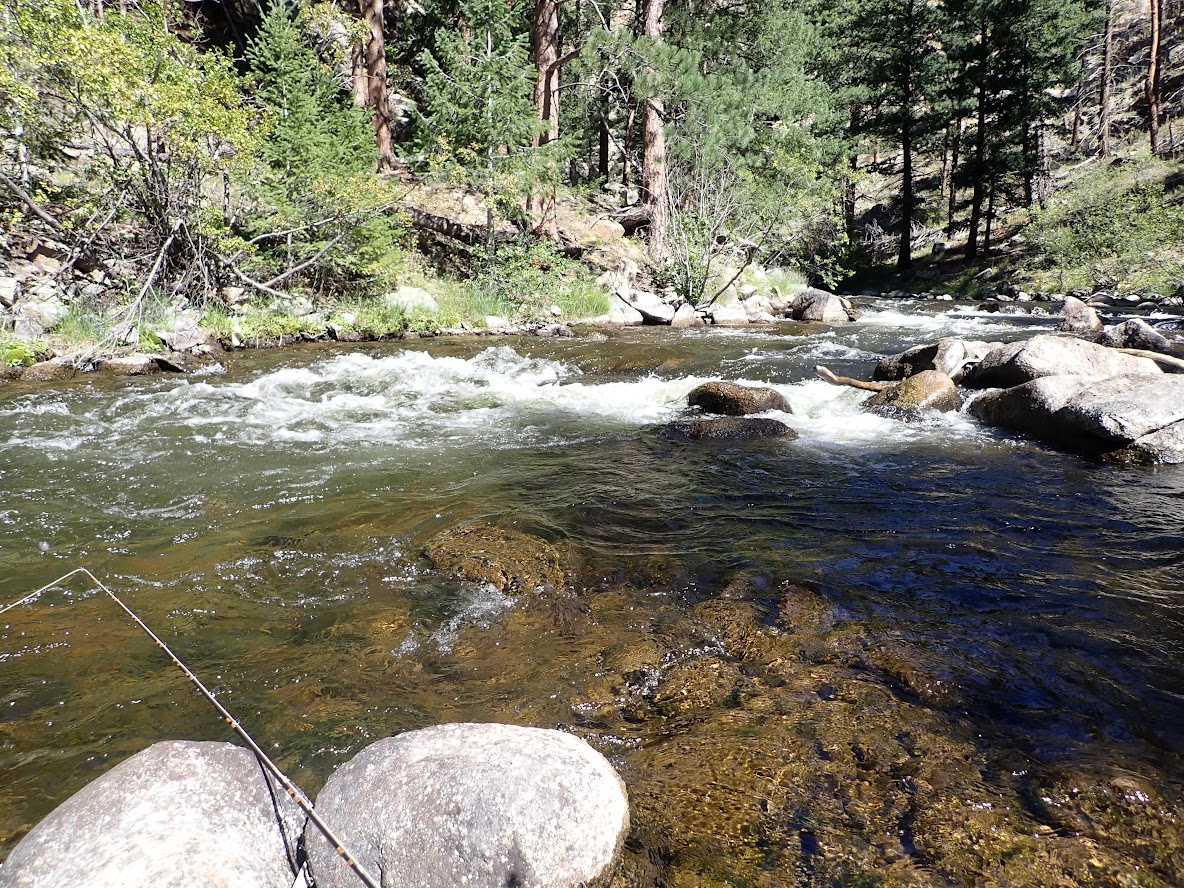 Wednesday developed into a sunny day with the high temperature on South Boulder Creek approaching eighty degrees. Wet wading seemed like an attractive option, but I recalled that my feet grew numb even while wearing waders due to the cold bottom release from the dam. I slid into my waders and rigged my Orvis Access four weight and descended the steep trail from the kayak parking lot to the edge of the creek. Three cars preceded me to the parking area, and another arrived with a man and presumably a son and grandson, while I prepared to fish. Surely the small number of vehicles meant that I would have the creek mostly to myself. 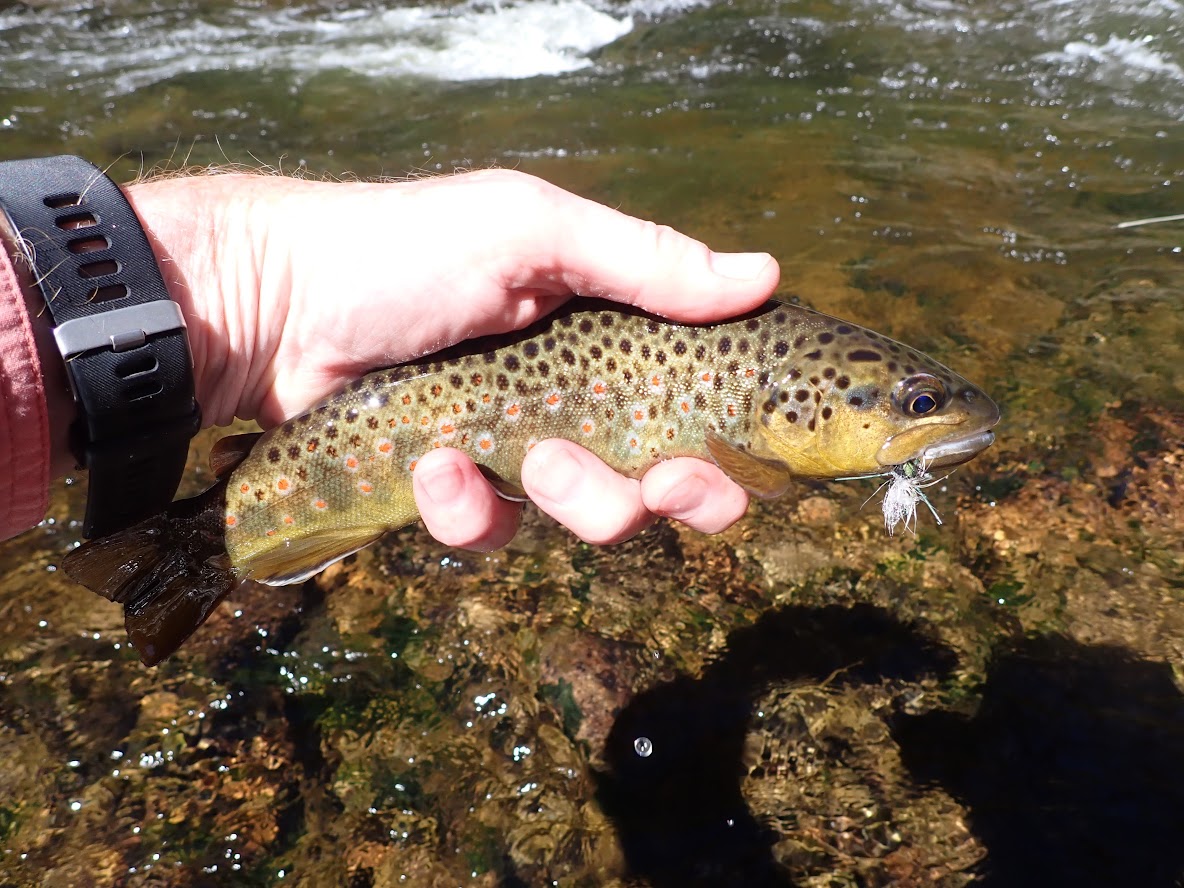 As I crossed the creek at the bottom of the steep trail, it seemed that the rushing flows were stronger than 139 CFS; however, when I checked again upon my return home, the DWR web site graph continued to depict a level line at the aforementioned velocity. As mentioned in the first paragraph, I anxiously anticipated prospecting with large green drake dry flies; and I did, in fact, do some of that, but the fish were not as cooperative, as they were on 8/11/2020 and 8/14/2020. According to plan when I arrived at my favorite starting point, I tied a parachute green drake to my line and began to prospect likely fish holding lies, but the stream residents showed no interest.

After I covered several very attractive pools with no response from the fish, I exchanged the green drake for a peacock hippie stomper. In the early going before lunch the stomper registered a pair of trout, but it also generated an abundant quantity of refusals, so I swapped it for a user friendly green drake. The user friendly fooled my only rainbow trout of the day, but then it also became a fly that the fish decided to inspect but not eat. 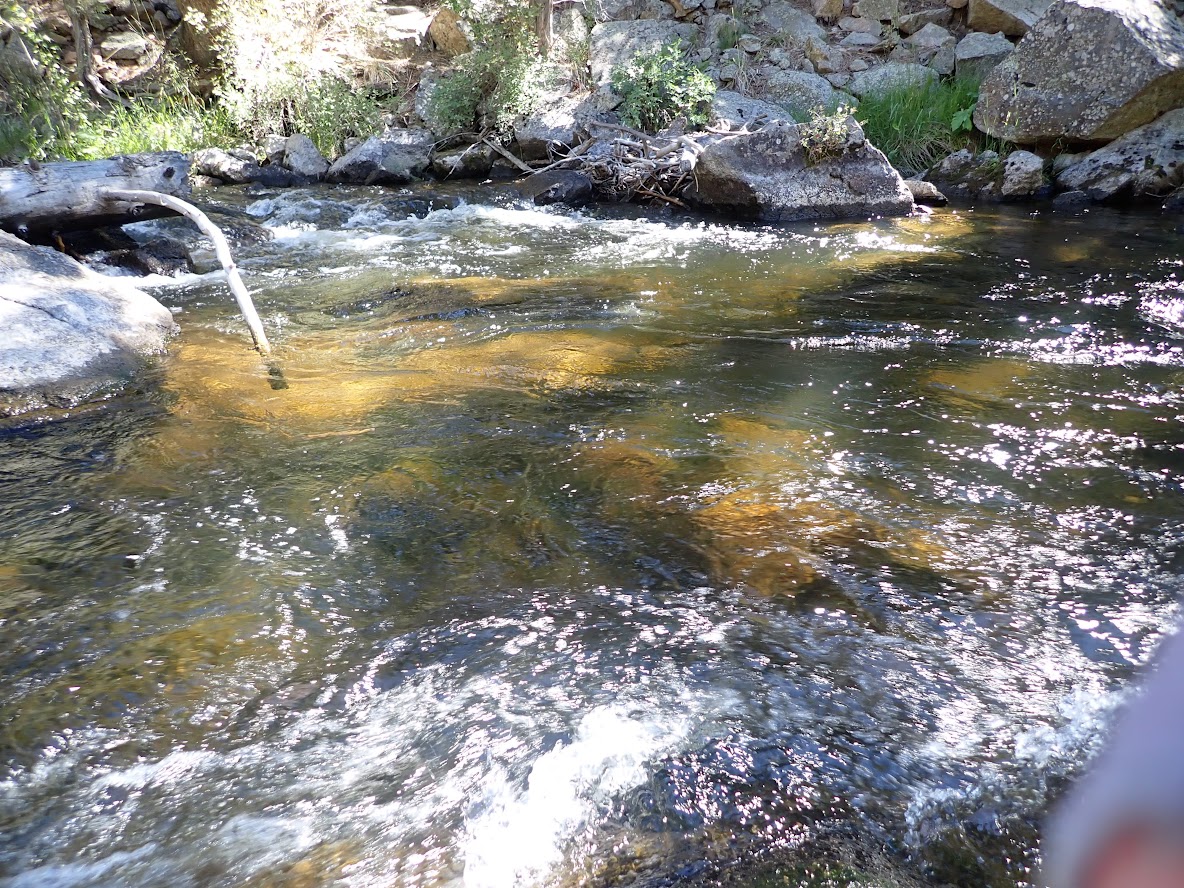 Worth a Few Casts 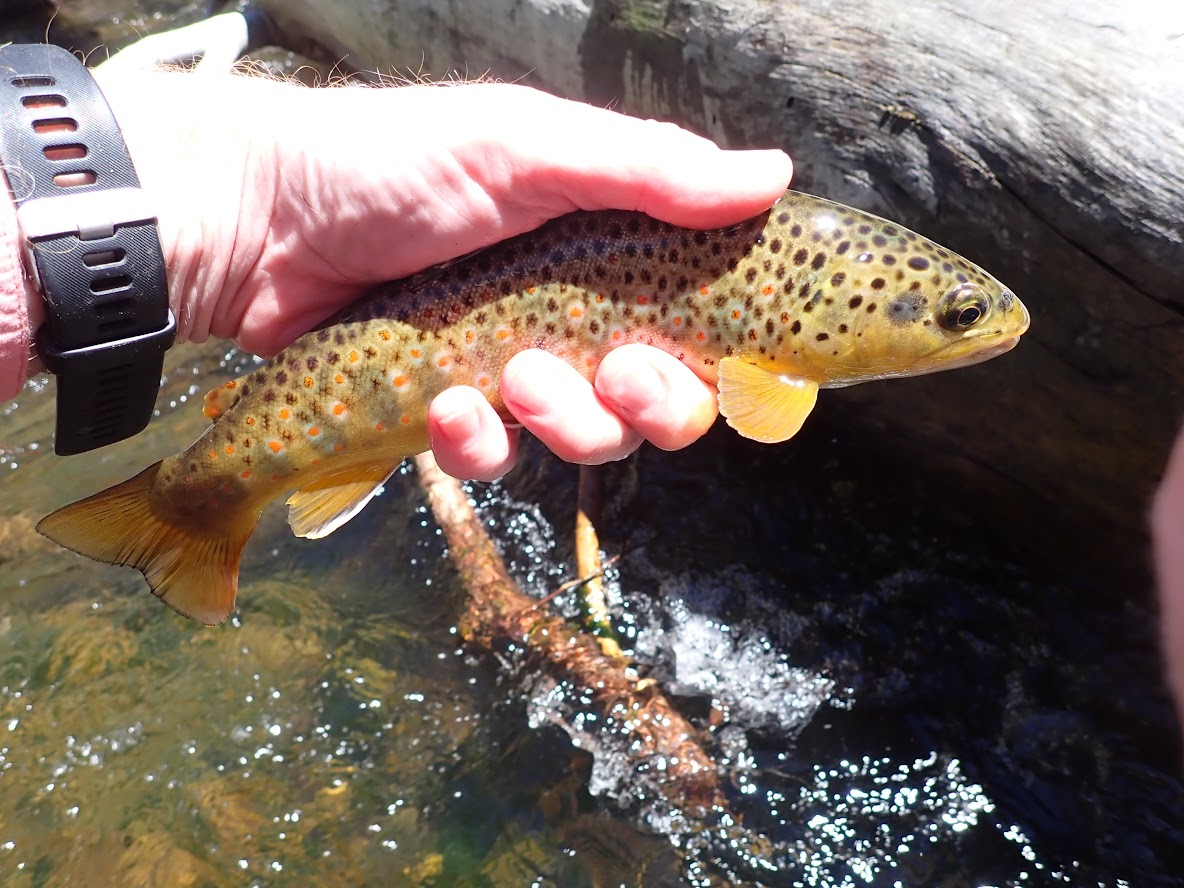 Held in the Sunshine

This description of my morning fly fishing pretty much characterized my entire day. I cycled through a lot of flies but never settled on a consistent producer, until the end of the day on my way back to the parking lot. I fished diligently and covered a significant amount of stream and managed to land fifteen trout. All were brown trout except for the rainbow that crushed the user friendly. Ten trout rested in my net between 10:45 and 2:45, and I added five in a thirty minute period, when I stopped to fish a favorite pool during my return hike. Obviously my catch rate in the first four hours was very lackluster. 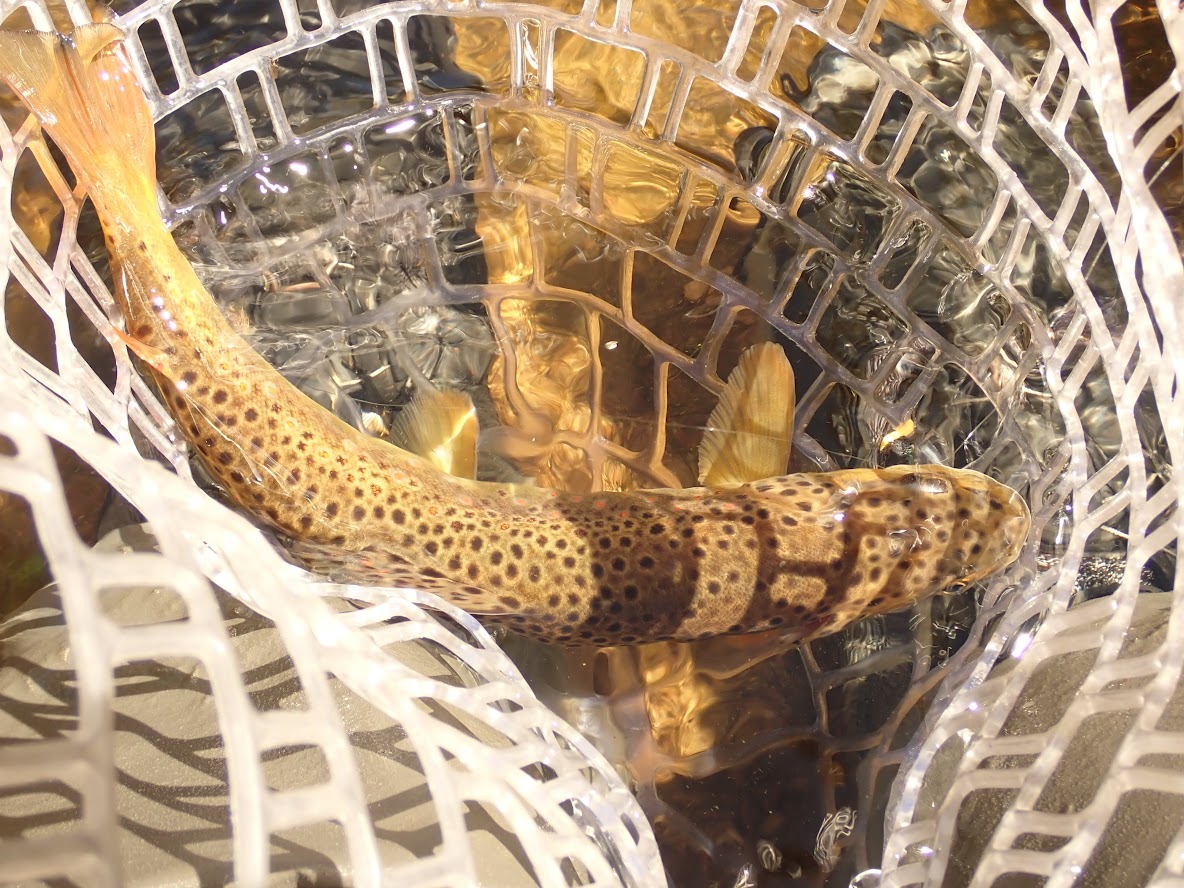 After lunch I tried a tan pool toy hopper trailing a beadhead prince and a salvation nymph, and I succeeded in attracting a batch of refusals to the hopper. The nymphs were totally ignored, so I returned to the dry fly approach and tossed a green drake comparadun for a reasonable length of time. The solitary green drake imitation duped one fish, but it was largely avoided. What could the trout be looking for? I pulled a beetle from my box, and it was one of the most popular flies of the day. After some initial success with the beetle, the action slowed down, and I spied several natural green drakes and a large pale morning dun. I switched to a size 14 light gray comparadun and induced one trout to gulp the large PMD imitation, and then I reverted to the beetle and added the green drake comparadun as the second dry fly. Of the first ten fish landed before I embarked on my return hike, three ate the hippie stomper, one chomped the light gray comparadun, one smacked the user friendly green drake, one sipped the green drake comparadun, and four nipped the Jake’s gulp beetle. The numerous fly changes were indicative of a slow catch rate and my inability to identify a consistently productive fly for the trout of South Boulder Creek. 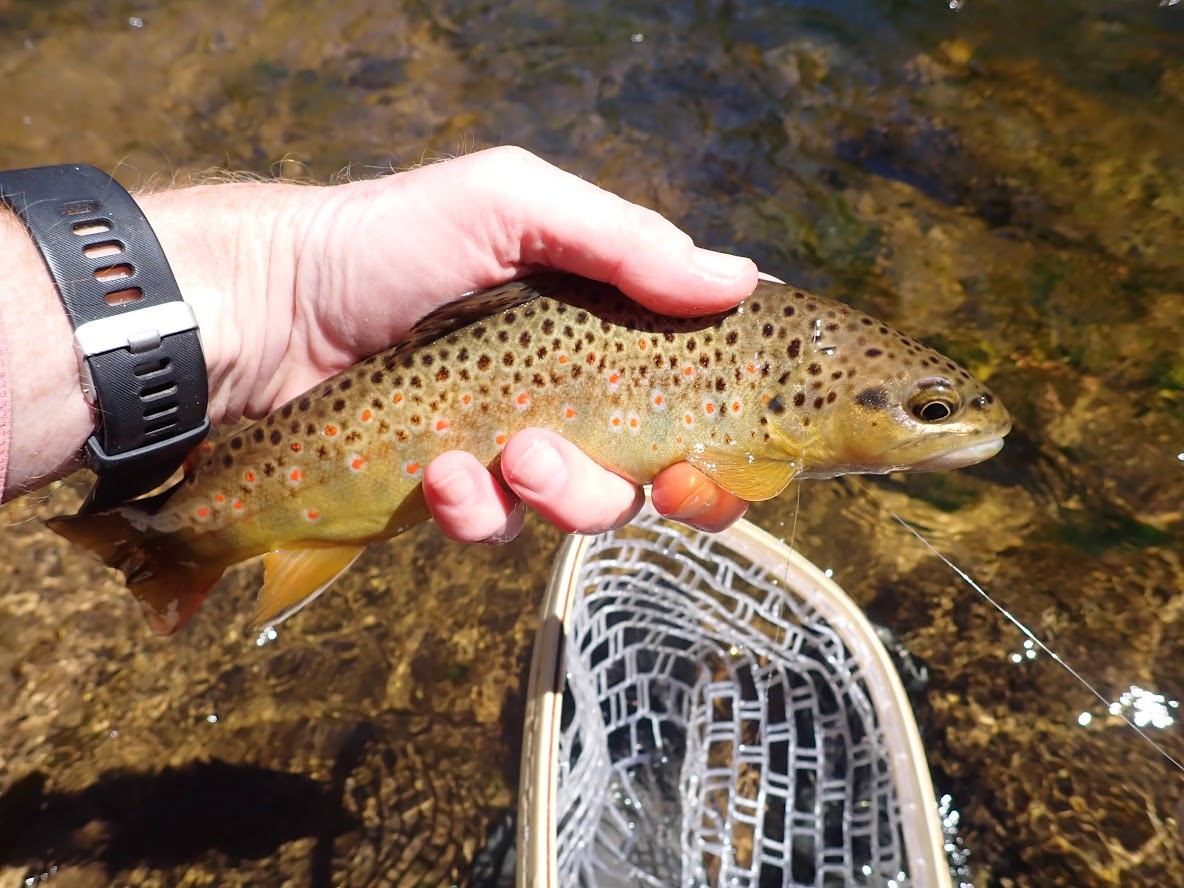 I wasted too much time casting to center runs and pockets, because most of my success was derived from the deep pockets and riffles along the bank. The higher than desired flows reduced the number of prime holding spots for trout, and this forced me to move often, and this in turn caused me to climb over numerous boulders and to battle strong currents to make headway. 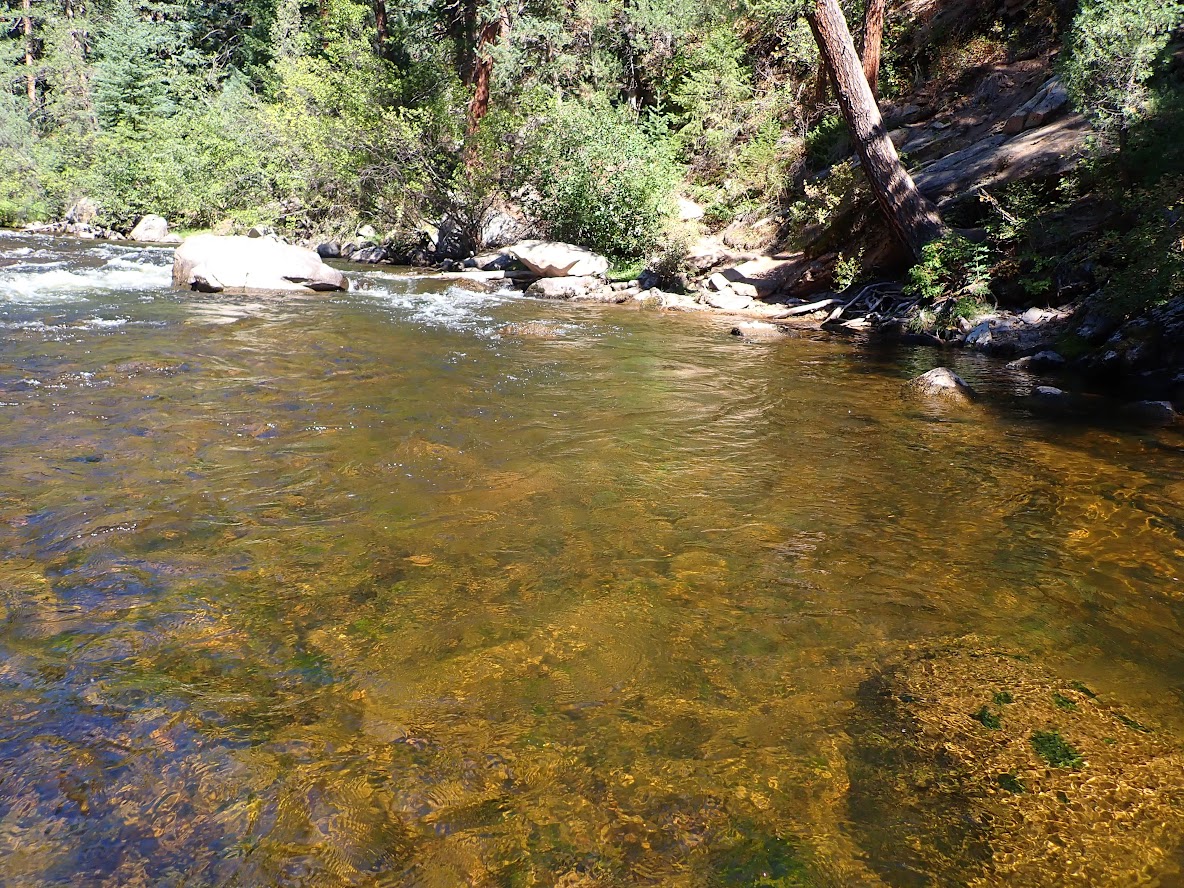 At 2:45PM I reached an area where the canyon narrowed, and flows at 139 CFS hampered my ability to find decent holding water. I hooked my fly to the rod guide and began my return hike. After .75 mile I approached a nice wide pool and before wading through it to continue my return journey, I paused and observed several rises. I decided to extend my fly fishing day, and I lobbed some casts of the beetle to the vicinity of rises. The beetle attracted several looks, but the trout would not close their jaw on the foam imitation. What could the fish be eating? I swapped the beetle for a size 18 cinnamon comparadun. It was mostly ignored or refused, but through persistence I induced two trout to sip the low riding mayfly imitation. 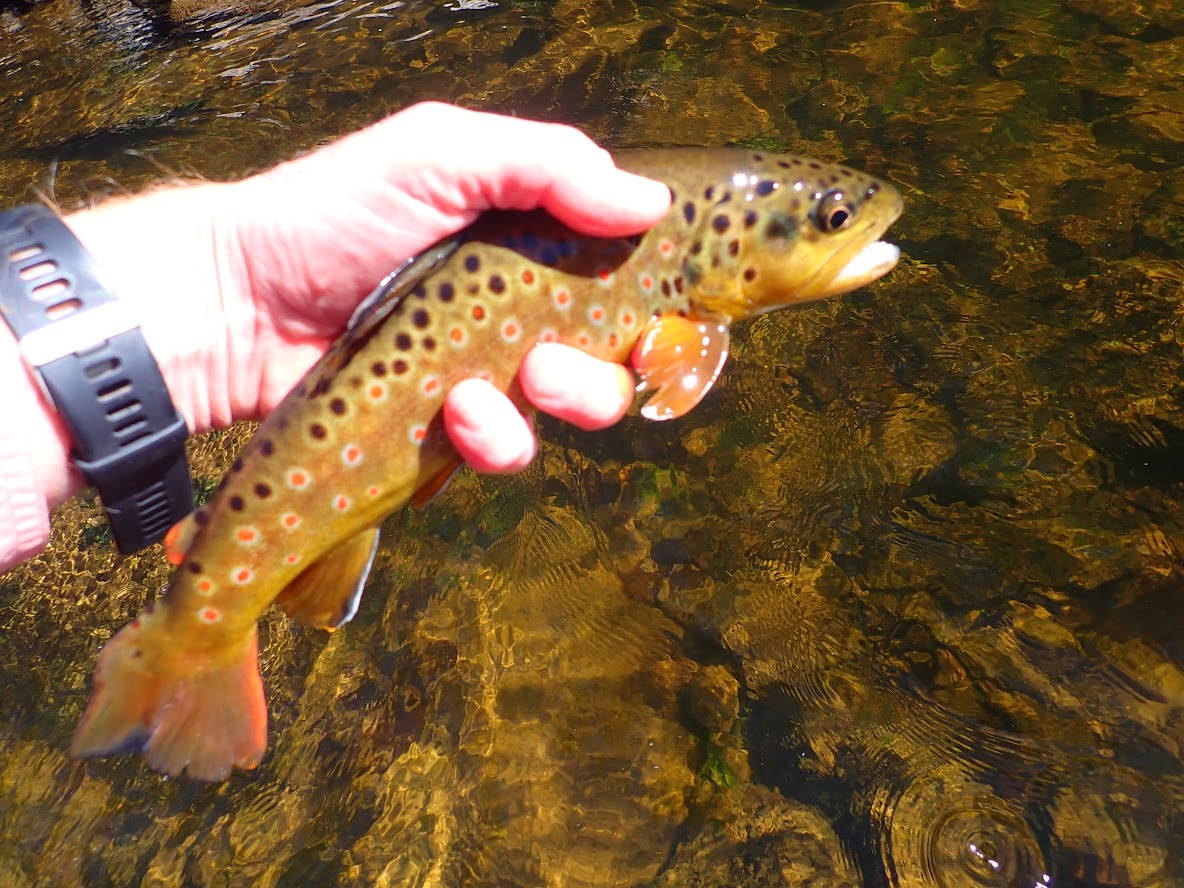 Four or five fish fed sporadically at the tail of the long pool area, and they became immune to my comparadun, so I exchanged it for a size 22 CDC blue winged olive. This was definitely not on the radar of the stream residents, so I removed it, and replaced it with a size 18 light gray comparadun. Voila! Three trout recognized the small comparadun as a desirable food item, and I built the fish count to fifteen. Four of the last five trout landed were browns in the twelve inch range, and I was quite pleased to end my day on a high note.