Wednesday was a day to celebrate at Saddleback Design as I finally caught up the monthly closings for 2012. I completed everything possible for July, and now I’m in wait mode as the office manager finishes the job costing. Why am I mentioning this in a fishing blog? This means that I will be able to resume my desired frequent fishing schedule for the remainder of the season. I began by fishing on back to back days on August 16 and 17.

Recall that my Aunt Judy and Uncle Lee visited us during the first week of August and during their stay we took a day trip to Fraser, CO on Amtrak. During this trip while sitting in the observatory car, I noticed a beautiful stretch of water from Gross Reservoir to the Moffat Tunnel that was South Boulder Creek. Upon my return I did some research and discovered that two popular stretches for fishermen were the tailwater below Gross Reservoir and the water below Pinecliffe that is accessed via the train tracks. On August 5, Jane and I visited the tailwater on a very hot day. I now decided to see what the Pinecliffe water was like. I was also scouting this water for possible after work fishing trips with Dan as I estimated it could be reached in one hour to one hour and fifteen minutes.

The drive time estimate proved to be accurate as I left the house at 7:50 and arrived at a small parking lot in Pinecliffe by 9:00, and I was taking my time as I wasn’t familiar with the road or the location. It was quite chilly as a front had moved through the front range on Wednesday evening, and I wore my fleece for my hike down the railroad tracks. It was a good move as the temperature never rose above the 60’s and at certain times I was actually chilled when the wind would pick up in the deep canyon. I had no idea how far I could hike down the tracks, so I decided to hike for 20 minutes or until 9:30 and see where that landed me. 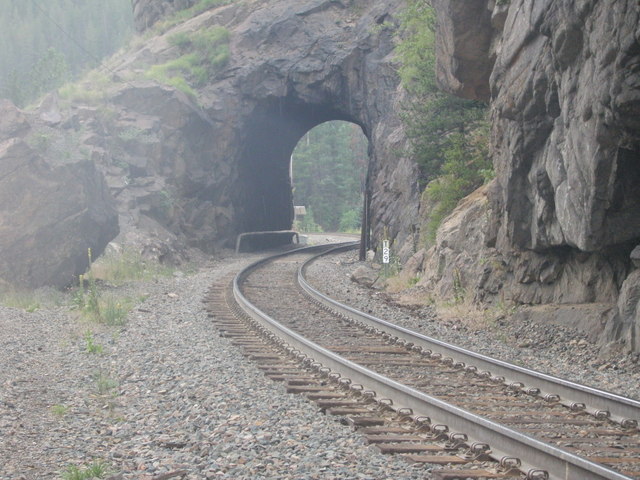 The first stretch paralleled a dirt road, and I was reprimanding myself for not driving down the road and parking closer, but on the return I discovered that the lane was gated. At the end of the lane I crossed a railroad bridge and shortly after that went through a very short tunnel. Next I covered a ten minute hike along the railroad bed, and I could see South Boulder Creek tumbling through the canyon way below me. I began to be concerned about how I was going to get down the steep bank from the railroad bed. Eventually I arrived at the entrance to a second tunnel. This one was more intimidating as I could not see light at the other end. It also wasn’t clear that the railroad tracks continued to parallel the stream on the other side as South Boulder Creek made a turn to the left and there was a rocky hill beyond the tracks.

I noticed a steep rocky trail that cut down in front of the tunnel so I decided to cast my fate and make the descent. I carefully maneuvered down the steep rocky path with loose train bed gravel until I reached a boulder strewn stretch of the creek. I had no idea what to expect from this water, so I tied on a parachute hopper with a beadhead hares ear, my latest go to combination. At the beginning the creek consisted of fast chutes and large plunge pools, and I probed the edges of these pools and in short order landed a tiny rainbow that was too small to count. At least I knew there were fish in this newly discovered water. 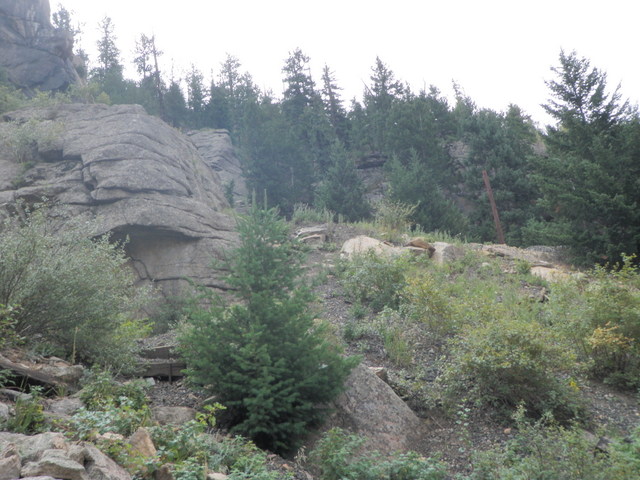 It was a beautiful setting and I continued to wonder why I’d never sampled this stream. There were steep canyon walls on both sides of me with dense trees and vegetation in the riparian zone. I fished on and landed a pair of rainbows on the hopper and photographed the second one as it had beautiful coloration. It would end up matching my largest catch of the day at around eleven inches. As I proceeded I found myself getting mostly refusals to the parahopper, so I swapped out the top fly for a Chernobyl ant. This didn’t really change things, and I continued observing mostly refusals, although I managed to land two more small rainbows, one on the Chernobyl and one on the hares ear. This pattern would largely continue over the remainder of the day. For every ten attractive pockets or pools I fished, nine would yield refusals, and in one pool I’d catch a fish. 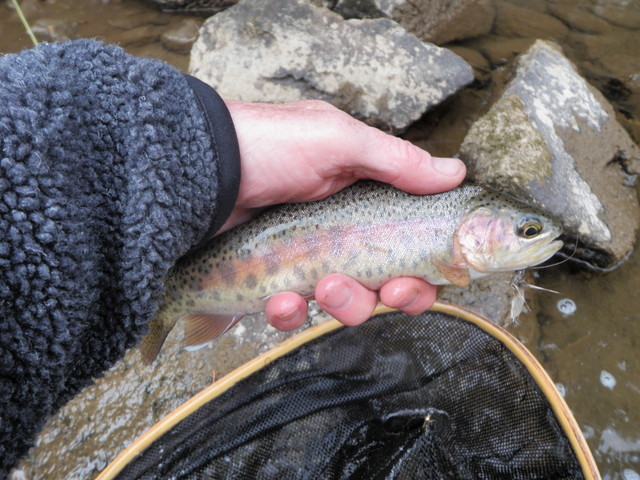 After fishing the Chernobyl for an hour or so I went through a bunch of fly changes. I tried one of the new muggly caddis flies I tied using snowshoe rabbit hair, and that produced the second rainbow of matching size to the second one I’d photographed. After the muggly got saturated and stopped floating well, I tried a size 14 2XL trude with an emerald body, but that didn’t even bring refusals. I clipped that off and tied on a lime green trude, and landed a fish. A royal stimulator joined the menu and I added a beadhead pheasant tail as a dropper. Everything I tried resulted in pretty much the same pattern of 90% rejections and 10% catch. 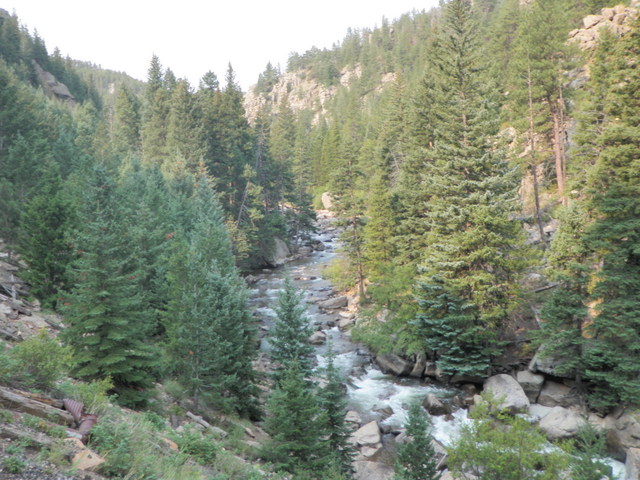 I paused and looked through my attractor box while debating whether to go deep with some nymphs and avoid the surface rejection problem entirely. I discovered that I only had one yellow Letort hopper, and tried that for awhile with no success. I also noticed a smaller Letort hopper with a light gray body and used that for a longer period with a bit of success. I landed a pair of small rainbows on the beadhead pheasant tail while fishing the gray hopper on top. My fish count had climbed to eight when some darker clouds moved in and a light rain began to fall. I hadn’t packed my raincoat, but I lucked out and the rain never intensified to the point that my fleece got soaked. I began to notice a few sporadic mayflies emerge, probably PMD’s, but this didn’t seem to increase the trout’s interest in my beadhead pheasant tail. Somewhere along the line I added a RS2, but again no response.

I finally decided that since nothing was working as the top fly, I’d return to the Chernobyl since it at least floated well and minimized the need for false casting and wear and tear on my shoulder and elbow. I tied on the Chernobyl and went back to the beadhead hares ear and picked up a pair of rainbows that grabbed the nymph as it began to lift or swing at the end of drifts when I cast across and let it drift downstream.

The canyon was starting to widen and that put my mind at ease regarding how I was going to exit, and the stream was spread out a bit more causing its nature to shift from plunge pools to pockets, runs and pools. I was considering calling it a day when I approached a beautiful deep pool where the main current ran against a large flat rock on the opposite bank. I spotted numerous subtle rises in the pool so after running the Chernobyl/hares ear through the run and pool with no results, I decided to try a single dry. I wasn’t seeing anything on the water, so I decided to go with a small size 16 sparse deer hair caddis with a light gray body. This brought refusals, but I also managed to land two rainbows from the pool. Maybe I should have been using the small caddis all along?

After I’d disturbed the pool with numerous casts and two fish landings, I spotted a path on the left bank. It was around 3:30, so I decided to take advantage of an obvious exit path and climbed the steep but well worn trail to the railroad bed. This brought me to the east end of the tiny first tunnel. I hiked a short distance to the railroad bridge and spotted a rise or two in the nice pool before the creek flowed under the bridge. I circled back across the bridge and went down to the tail of the bridge pool and began tossing casts with the caddis. The fish were having none of it, but the rises continued throughout the pool. I waded across the tail and climbed up on the rocks on the upstream side of the bridge and attempted some downstream drifts to the areas of rising trout. As I was doing this, I observed five or six PMD’s slowly rising up from the stream, so I switched the caddis for a money fly, a light gray comparadun. Finally on a downstream drift a fish rose to my comparadun, and I set the hook and felt the momentary weight of a fish.

As I watched the sun came back out and the hatch temporarily paused so I decided to continue on my way to the car. I walked up the lane and discovered the locked gate at the end, and that vindicated my parking place and extended hike along the railroad bed.

It was a beautiful location, and I managed twelve small rainbows, and I saw enough promise to return and give South Boulder Creek another chance. I’d like to learn if I could hike further east along the tracks beyond the second tunnel.