On Wednesday August 1, my Aunt Judy and Uncle Lee, who were visiting from Pittsburgh, Pa. took me on a train ride on Amtrak from Denver to Fraser, CO. Along the way the train tracks followed South Boulder Creek from Gross Reservoir to the Moffat Tunnel. From my vantage point in the observation car, South Boulder Creek appeared to be an interesting fishing location that I had never explored. In fact there were quite a few fishermen in the stream above Gross Reservoir.

When I returned to Denver, I pulled out the DeLorme atlas and found South Boulder Creek and discovered it was not that far away. Next I Googled South Boulder Creek and fishing and read about a great fishery right under my nose that I ignored. This peaked my interest and so when I decided to go fishing on Sunday, August 5 I chose South Boulder Creek below the dam. Jane agreed to accompany and we got off to a decent start by around 9AM. We threw Jane’s mountain bike on the rack, but we weren’t sure there would be a place that she could ride.

It took us longer than would otherwise be required as we stopped for gas and several times to tighten and adjust the mountain bike as it came loose from the rubber straps on the rack. Also we missed the turn off on Coal Creek Canyon Road for Gross Reservoir as I thought there was a closer road. Now that I know the route, I could probably be in the parking lot getting ready to fish within an hour from my home in Denver.

It was a very warm day in Denver with temperatures in the upper 90’s, so it probably wasn’t fair to evaluate the fishery based on my experience under adverse weather conditions. Jane and I hiked down the steep path from the parking lot and immediately intersected with the stream at the bottom. We hiked down the path along the north side of the creek a ways, and I entered while Jane continued hiking further along the path. We agreed to meet around 12:30 for lunch, and I gave Jane my watch.

I tied on a parachute gray hopper and trailed a beadhead hares ear and waded across the creek at one of the few places where this could be done. As I worked my way up along the left bank just above a small island, I landed a small seven inch rainbow. I noticed a worn path on the left bank, so decided to climb up on the south bank and explore. I discovered a nice path and hiked down the path quite a ways until I found some nice slack water pockets on my side of the stream. I worked my way back up along the bank with the parachute hopper and BHHE and picked up two more rainbows. One was in the twelve inch range and quite colorful, so I photographed it before releasing. I was getting quite a few refusals in addition to the three landed fish, and this was frustrating me. In one decent deep narrow slot below a large rock I spotted a decent sized rainbow move from the bottom and inspect my fly, but it turned away as I held my breath. 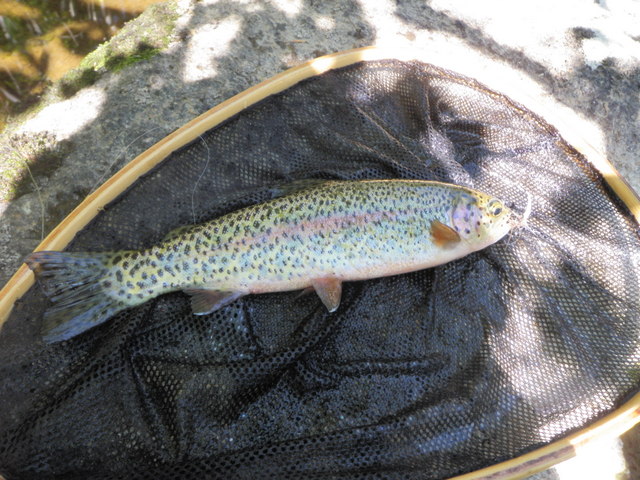 When I reached the location of my initial crossing, I crossed again so I’d be visible to Jane and worked my way up along the right bank a bit. Once again I experienced three or four refusals, and just as I was switching out the parachute hopper for a Chernobyl ant, Jane arrived. I immediately met her on the north bank and we hiked back up the steep trail to the parking lot. We grabbed our lunches and found a nice shady area among some evergreen trees and downed our lunches.

After lunch Jane decided to take her folding chair to the waters edge. She told me she had hiked down the path and not too far below where I was fishing encountered a bridge so I decided to cross the stream again and hike to the bridge and fish back up stream. Unfortunately when I arrived near the bridge, several fishermen were occupying a beautiful pool so I went back upstream above them. I found a nice pool twenty yards above them and I could see three or four decent fish swimming about, but I could only extract a few cursory looks from these fish. 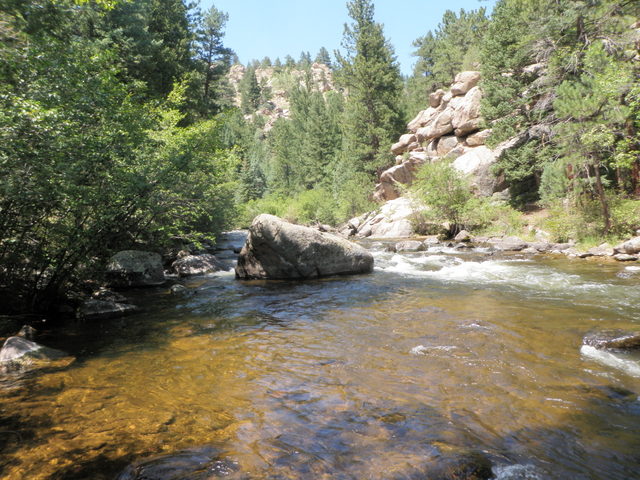 After fishing upstream some more with no results, I switched the Chernobyl ant for a yellow Letort hopper. I’d seen a golden stonefly fluttering up from the stream right after lunch and as I watched a bird swooped by and snatched the stonefly right out of the air. Perhaps the yellow Letort hopper would be taken for a golden stonefly. Unfortunately this theory didn’t materialize and after a bit, I clipped off both flies and tied on a bushy deer hair caddis. This fly actually produced three more trout, two rainbows and one brown. One of the rainbows was comparable to the one I photographed in the morning, so I snapped another photo while in the net. 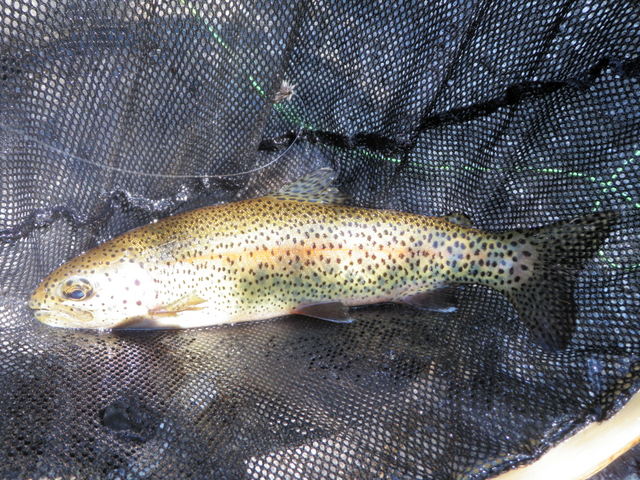 It turned out that I didn’t start fishing much below where I began in the morning, so I was overlapping my morning wade, and with an hour or so left to fish, I decided to hike back down the stream below the bridge and see what that water looked like. I found myself hiking up a trail a bit and then cutting back high above the river. A huge vertical boulder blocked further progress along the south bank so I dropped down to the river above it and fished my way back up along the bank to the bridge, a distance of approximately twenty yards. Along the edge of one of these shallow pockets an eight inch brown rose to my caddis and became the sixth fish landed on the day. 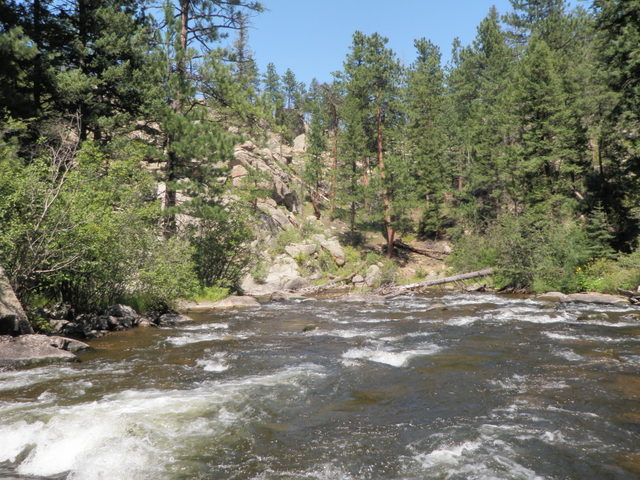 When I reached the bridge, I retreated back the way I’d come and climbed a steep bank and hiked back upstream along the south bank trail. I crossed at the same place as I’d waded after lunch and found Jane in her shady retreat in her chair. I waded out in the stream next to her refuge and attempted some downstream drifts, but only succeeded in provoking a couple refusals. It was 3:30 by now and we were both hot and tired, so we again climbed the steep trail and quit for the day.

South Boulder Creek is a beautiful location not far from Denver, and I will certainly return when the weather conditions are more favorable. The water is very cold as it comes from the bottom of a deep dam, and it represents only an hour drive. There is also fishing upstream and downstream worth exploring.