I made a pledge to myself to return to South Boulder Creek the week that began with August 16, and today, Wednesday I fulfilled that promise. On August 13 I learned that the flows below Gross Reservoir were at manageable levels, and green drakes were making their presence known to the stream residents. Flows on August 18 remained at 102 CFS, and I took advantage.

When I arrived at the Kayak Parking Lot only one vehicle was present, and while I prepared to fish another car arrived. The temperature was already at 77 degrees, when I began my hike down the steep trail to the creek, and I once again strung my Orvis Access four weight. My smallest rod is always a good choice for small stream fishing, as it is not as taxing on my shoulder and elbow as the longer and heavier rods in my arsenal. 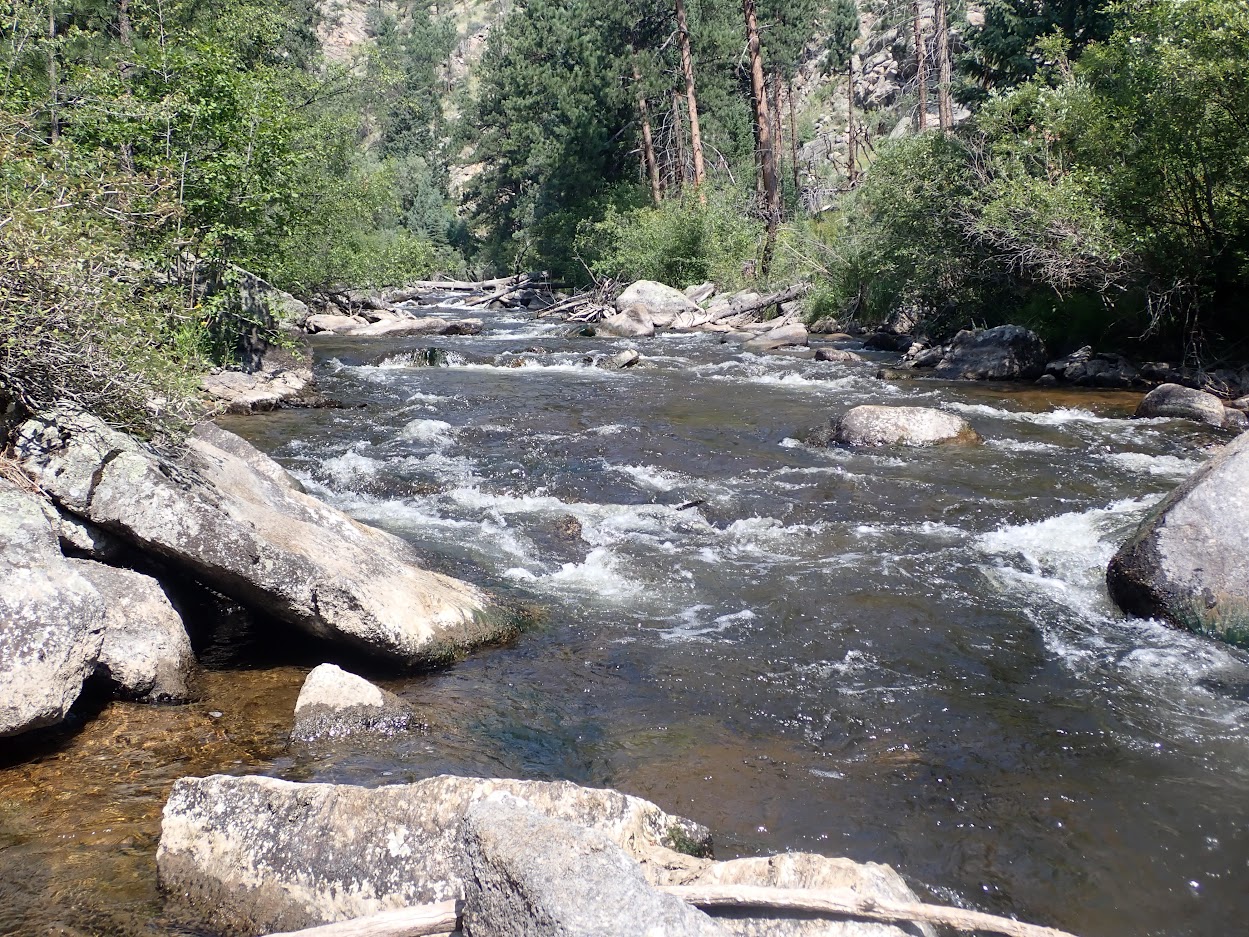 I was perched along the edge of the creek at 10:45AM, and after I configured my line with a tan pool toy hopper, prince nymph, and salvation nymph; I was ready to cast at 10:50AM. The air temperature was warmer on Wednesday compared to the previous Friday, and I was curious how that might affect the timing of the green drake hatch. On August 13 my early efforts with a parachute green drake and peacock hippie stomper were not effective, thus, I chose a dry/dropper combination with a pair of heavy nymphs. 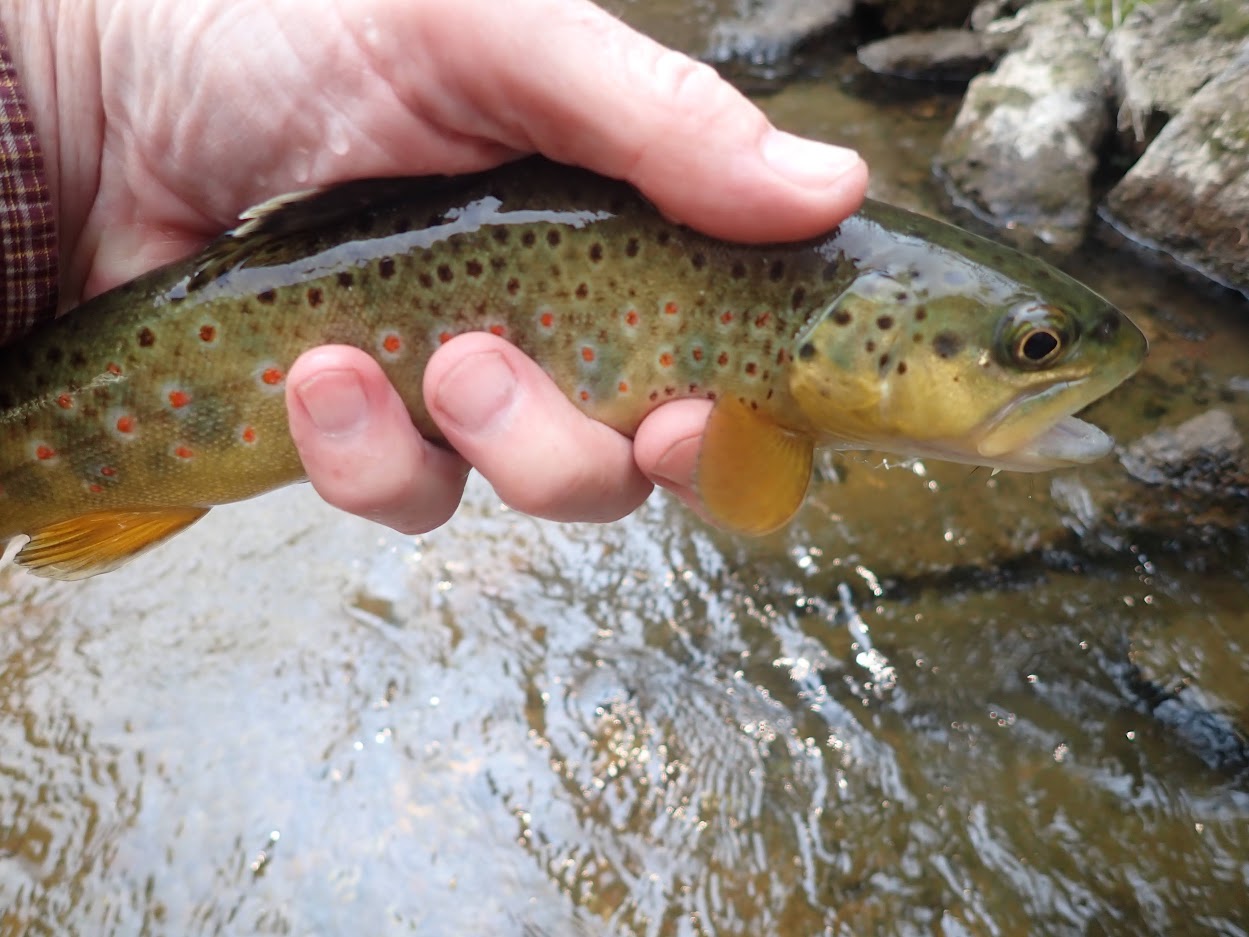 Well, the shift to nymphing paid modest dividends, as I landed three small brown trout on the salvation, before I paused for lunch at 11:45AM. In addition to the netted fish I experienced quite a few refusals to the tan pool toy hopper. The fish seemed interested in surface food, but my hopper was not exactly to their liking. After lunch I shifted gears and removed the three fly set and opted for a peacock hippie stomper. The stomper did not generate action in a couple of prime pools, so I added a one foot leader and attached a size 14 gray stimulator for a double dry offering. The gray stimulator and hippie stomper enabled me to increase the fish count by a few fish, but once again looks and refusals outnumbered takes. I noted a couple of natural green drakes shortly after lunch, so I decided to migrate directly to my ace in the hole parachute green drake. I knotted the same fly to my line that produced twenty-two fish on Friday, and the fun began. By same fly, I mean the same type of fly and the same physical fly. After Friday’s battering the maroon thread ribbing was unraveled, but the wing post, hackle and dubbing remained in decent shape, although the abdomen closest to the thorax was down to bare olive thread. 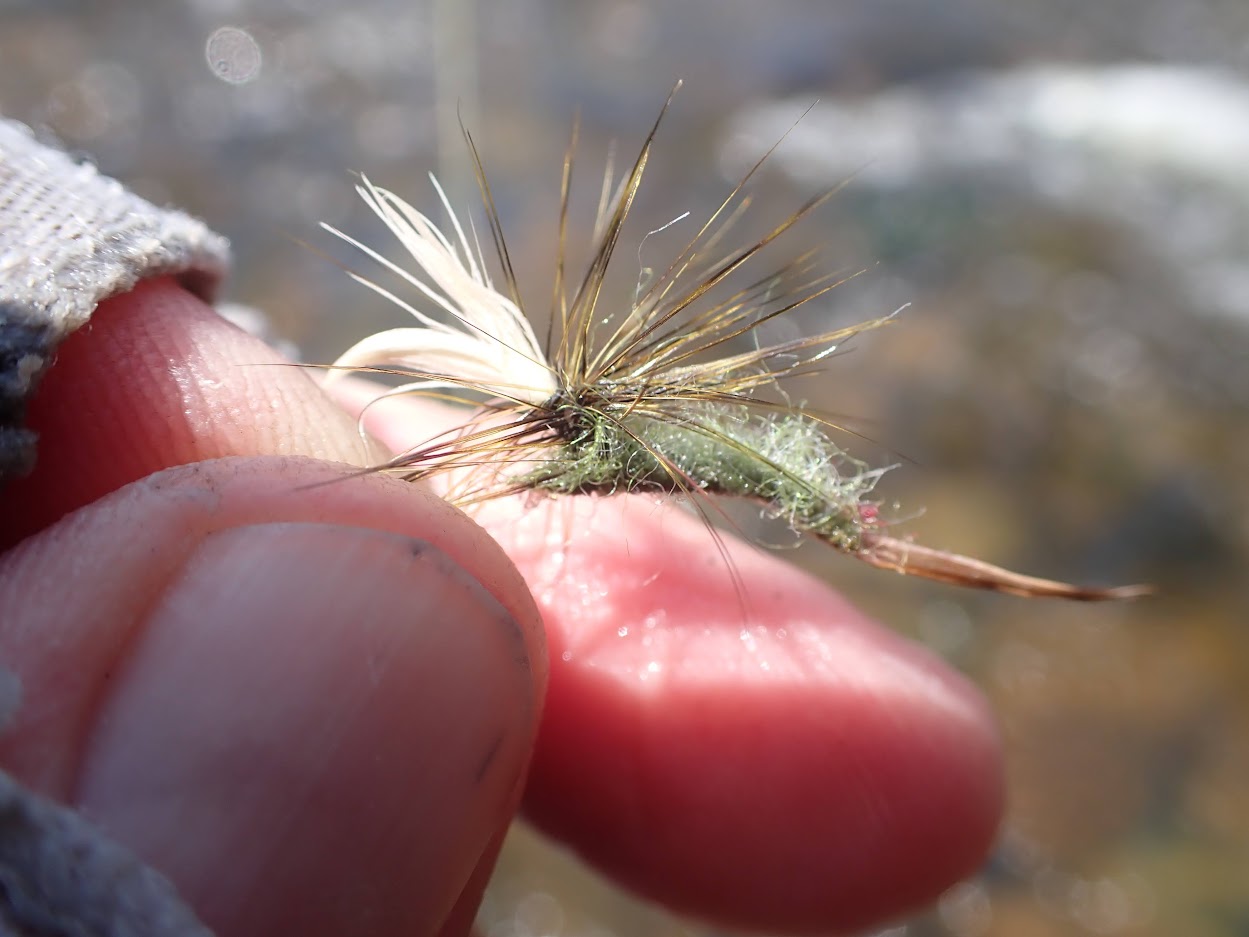 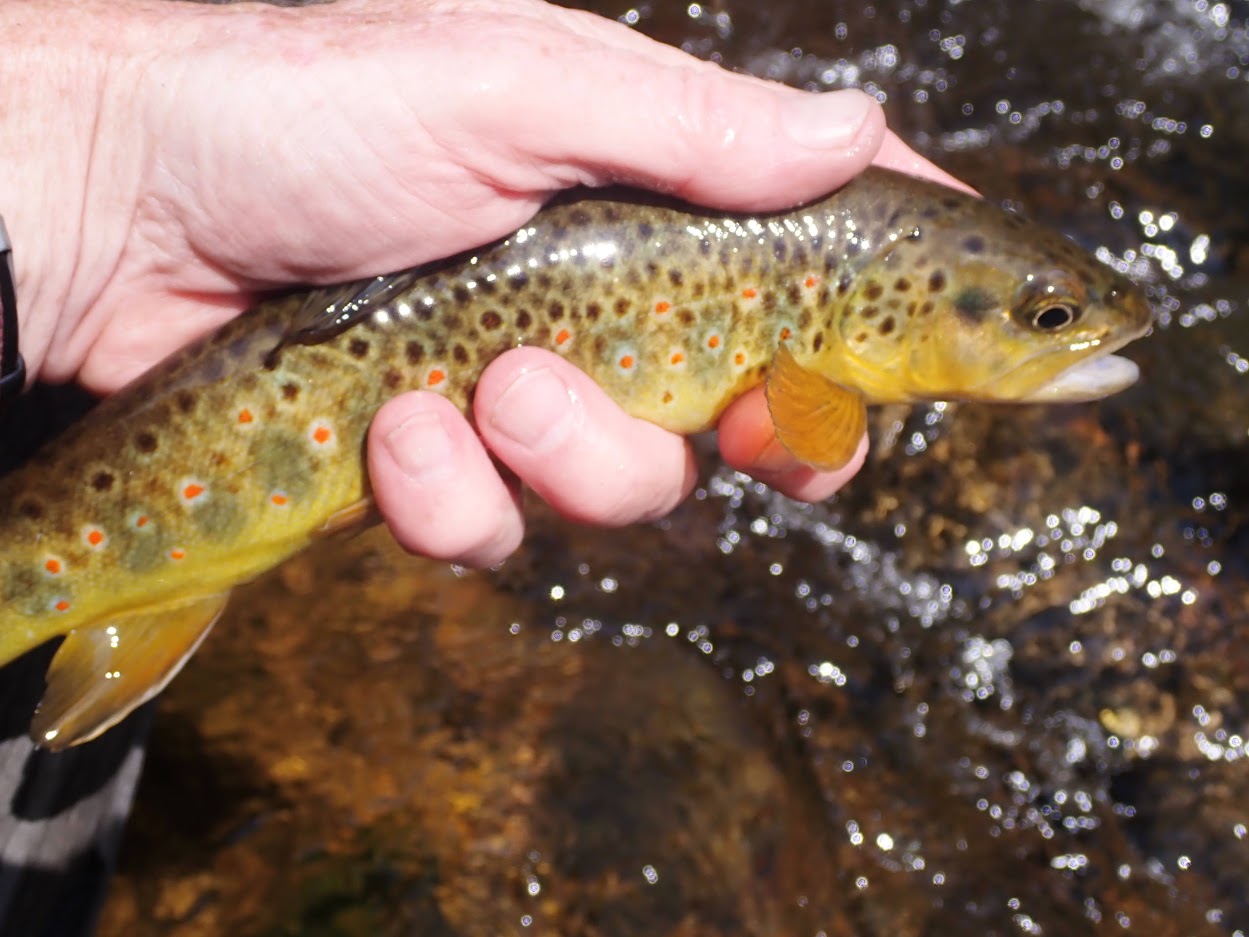 The blemishes to the parachute green drake did not bother the trout in the least, and I proceeded to land another fourteen, before the hook point finally broke off ending a string of thirty-six fish landed on one fly. I suspect this may have been some sort of record for this long time angler. With my workhorse fly out of commission I dug into my green drake fly box and extracted another parachute green drake. This one had maroon ribbing and tightly wound dubbing with a dense hackle and a tall wing post. It looked ideal to me, and it worked fine for two fish, at which point the hackle climbed up the wing post, and I was forced to retire it from service. Unlike the previous Mr. Durable, green drake number two proved to be a fragile version of the pattern. I pulled out another brand new paradrake, and it generated a few fish, but the interval between landed fish extended. This circumstance was probably more attributable to the waning hatch than my fly choice, but I persisted with the solitary green drake approach and boosted the fish count to twenty-four. 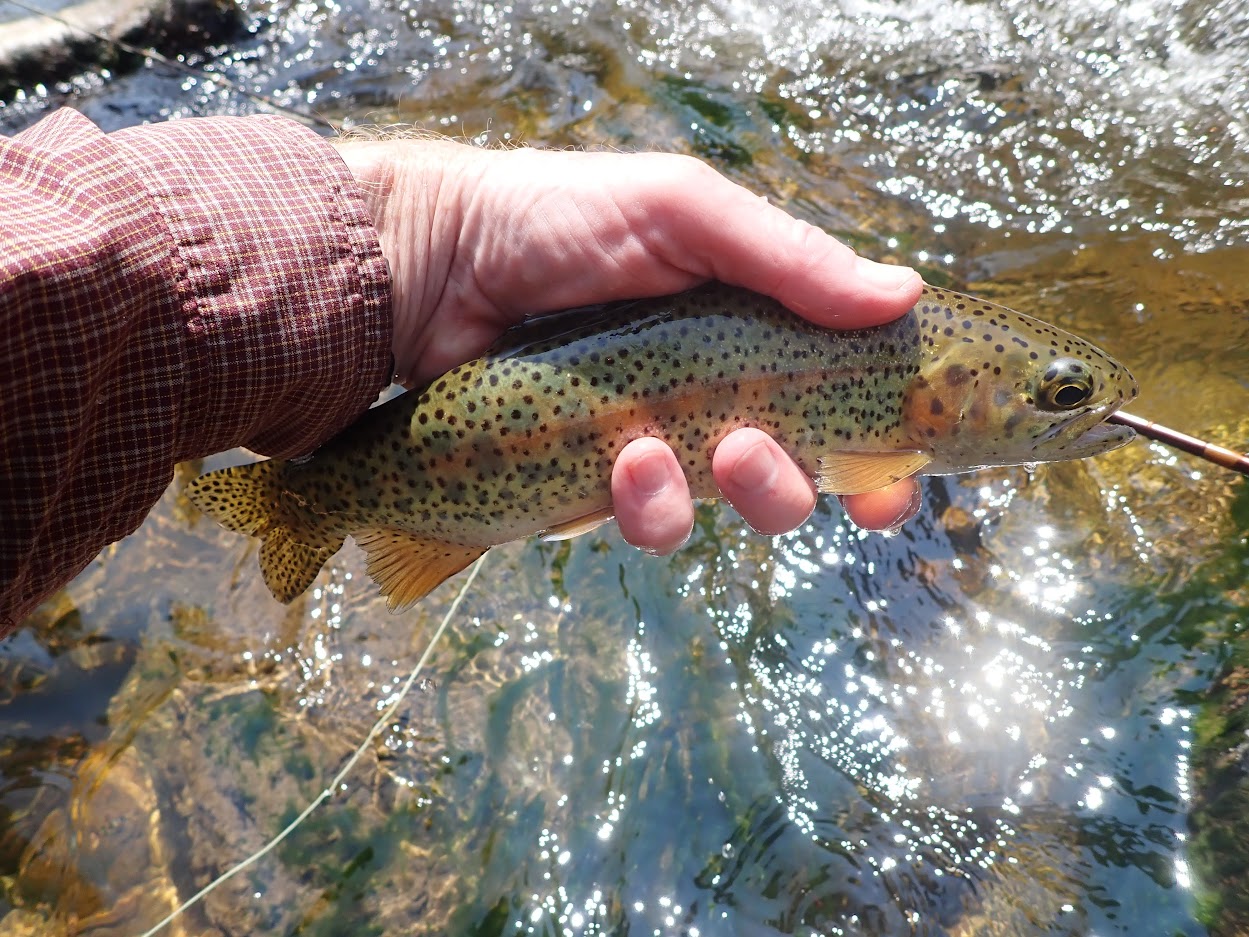 Out of the Net for a Second 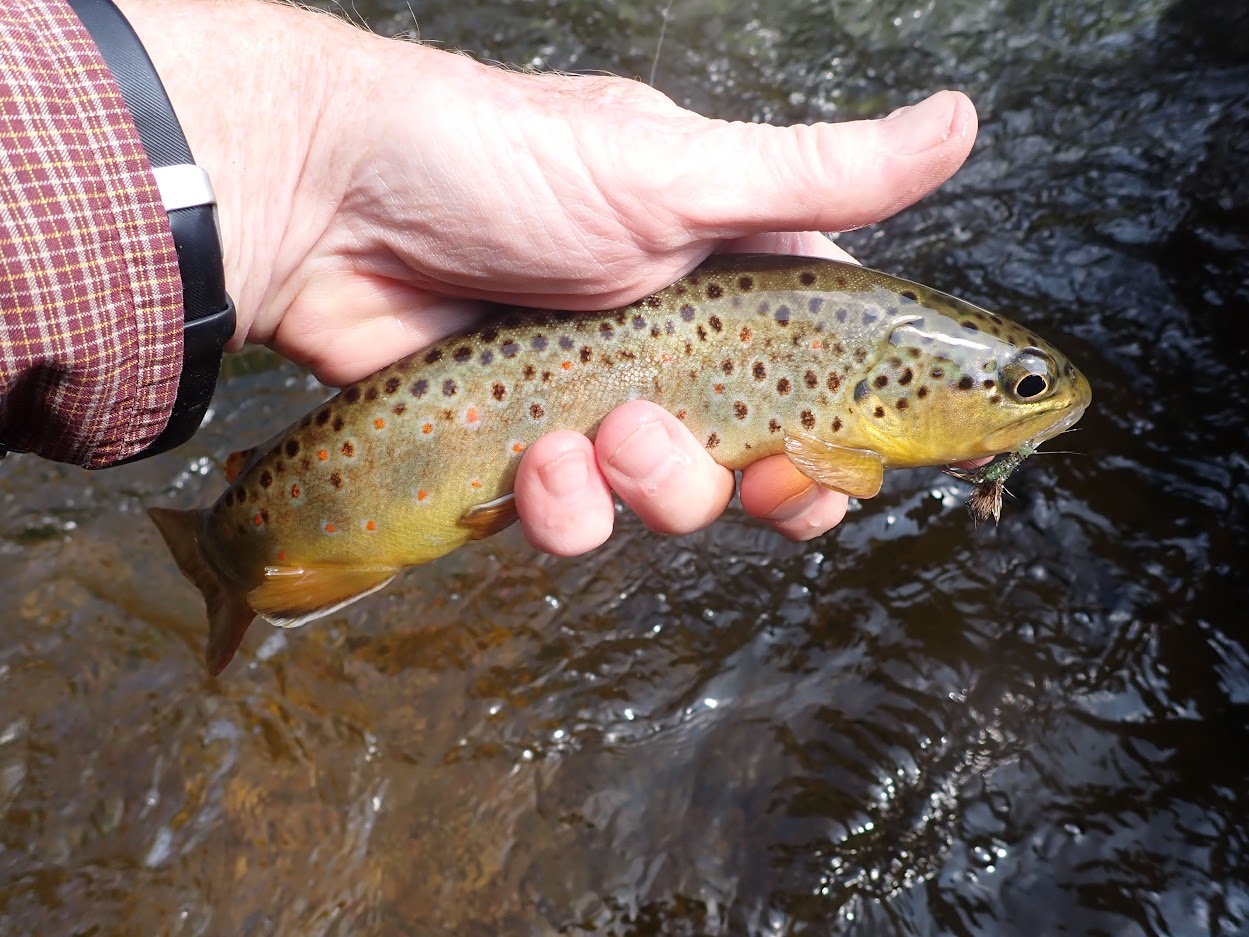 By now it was 2:30PM, and the bright sun warmed the atmosphere to the upper seventies. I was feeling rather tired, and it seemed that the fish were exhibiting the same fatigue. I did, however, witness a pair of natural green drakes, so I knew they were still active, In fact I saw one flutter on the surface nearby, and then it was promptly slurped by an aggressive eater. Perhaps my parachute version was not presenting the fuzzy profile of fluttering wings? I removed the parachute green drake and replaced it with a Harrop hair wing, which is heavily hackled similar to a stimulator. This was a great thought, but the trout showed no interest in the hair wing. 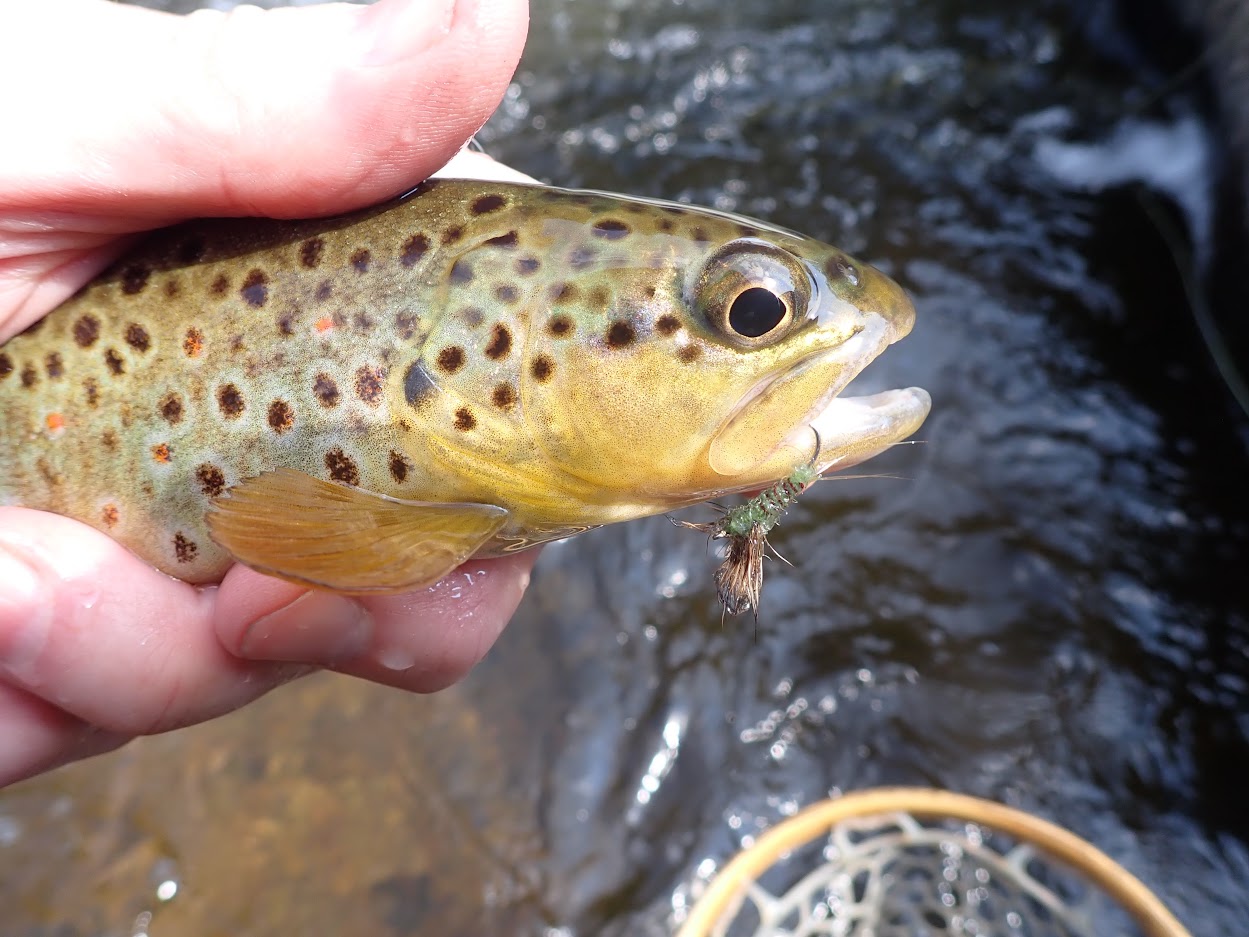 Should I abandon the green drakes? I was still seeing the occasional natural, so I decided to cycle through a few more of my green drake styles. First I tested a May break, which is a type of green drake cripple. This fly was difficult to track, and it never produced as much as a look, so it was quickly returned to the green drake fly box. I examined my box closely and decided to try a comparadun with a large and dark deer hair wing. The comparadun delivered success, and I stuck with it for my remaining time on the creek, and the fish count climbed from twenty-four to thirty-four. The trout did not jump on this fly in a manner similar to the noon to 2:30PM period, but the response was steady enough to keep me interested until 4:00PM. I made many more casts to each prospective holding lie, and many quality spots failed to produce, but if I persisted, I could dupe a trout here and there. 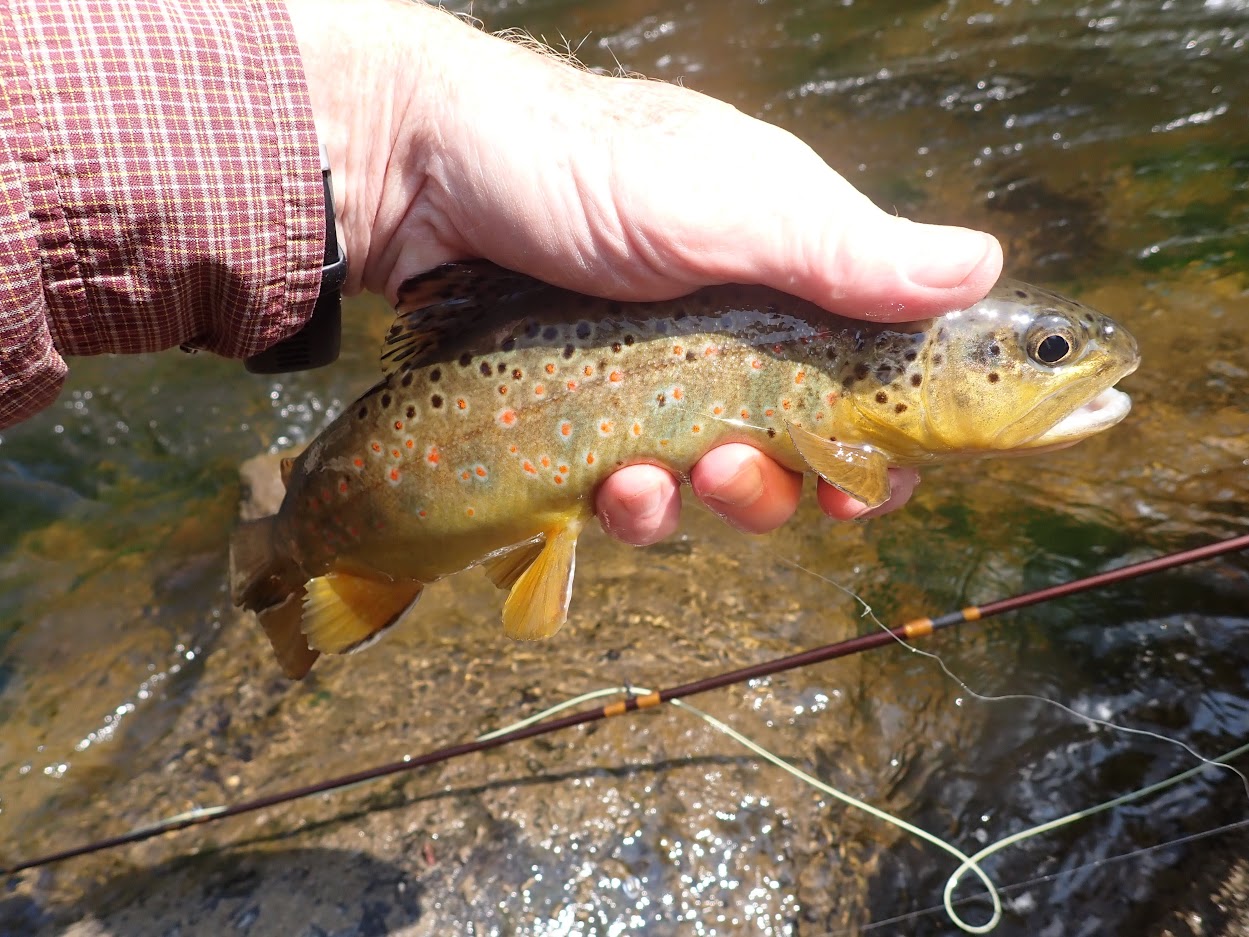 Horizontal Line on the Side

By 4:00PM I ran up against a natural breaking point, so I stripped in my flies and hooked them to the last rod guide above the grip. I was hot and weary and ready to call it a day. What a day it was! I landed thirty-four gorgeous wild trout. Three or four were rainbows, and the remainder were brown trout. I estimate that two rainbows and three brown trout stretched to the twelve to thirteen inch range, and the remainder were beneath the one foot cut off. Far and away the typical landed brown trout was in the nine to eleven inch range. All but five of the trout consumed a green drake, and two of the five non-drake eaters fell for a size 14 gray stimulator, which is a close relative to a green drake imitation. Once again moderate riffles and the tail of pockets and pools were the home to trout feeders. During the 12:00PM to 2:30PM period I could nearly bank on a trout, if I cast to one of these stream structures. I am proud to claim South Boulder Creek as my home water. If only the water managers would allow the flows to continue at the current levels.