After a banner day on South Boulder Creek on 08/03/2022, I was aching to return. I checked the flows upon our return from camping early in the week, and the releases dropped the outflow from 125 CFS to 105 CFS. I regard 80 CFS as perfect, but 105 CFS is quite favorable.

Friday was another hot day in Colorado, and the air temperature in South Boulder Creek Canyon probably peaked around 80 degrees. The flows, however, from the bottom of Gross Reservoir were cold and clear, and I was quite excited for another day on the small tailwater close to Denver. I elected to use my Orvis Access four weight since the flows were lower, and the shorter lighter rod was less taxing on my casting arm. 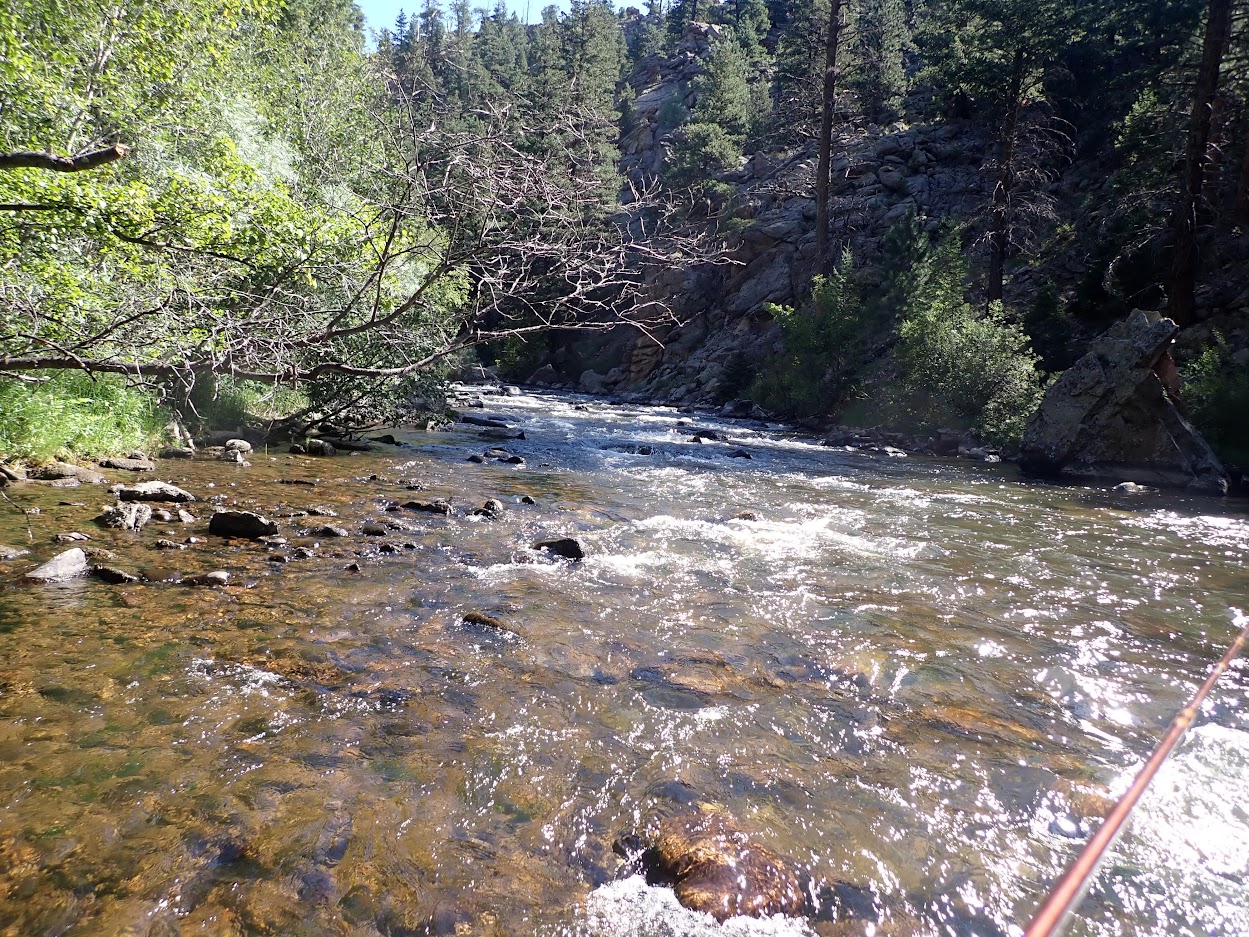 I hiked to my chosen starting point and knotted a size 14 poly wing parachute green drake to my line. I considered other offerings in the early going, but I looked forward to fishing green drakes, so why not test the waters at the start? The choice was prescient, and I racked up thirteen landed trout in the morning, before I broke for lunch at noon. The initial fly endured for ten trout, and then the hackle was severed by hungry teeth, and I switched to a size 14 green drake user friendly. The foam backed green drake imitation produced a couple trout, and then it became a refusal machine, so I switched to a size 12 parachute green drake with a turkey flat wing. The turkey flat version duped one trout, and then a wave of refusals ensued. Along the way I found a Wolf Moon landing net lodged on a cluster of logs, and I stuffed it in my backpack with the handle in the bottom of the pocket. The net frame was cracked, but the bag was in excellent shape, so I decided I could salvage that part for future use. Recall that my Wolf Moon landing net floated away from me on a recent visit to Clear Creek, so the fishing gods provided me with compensation. 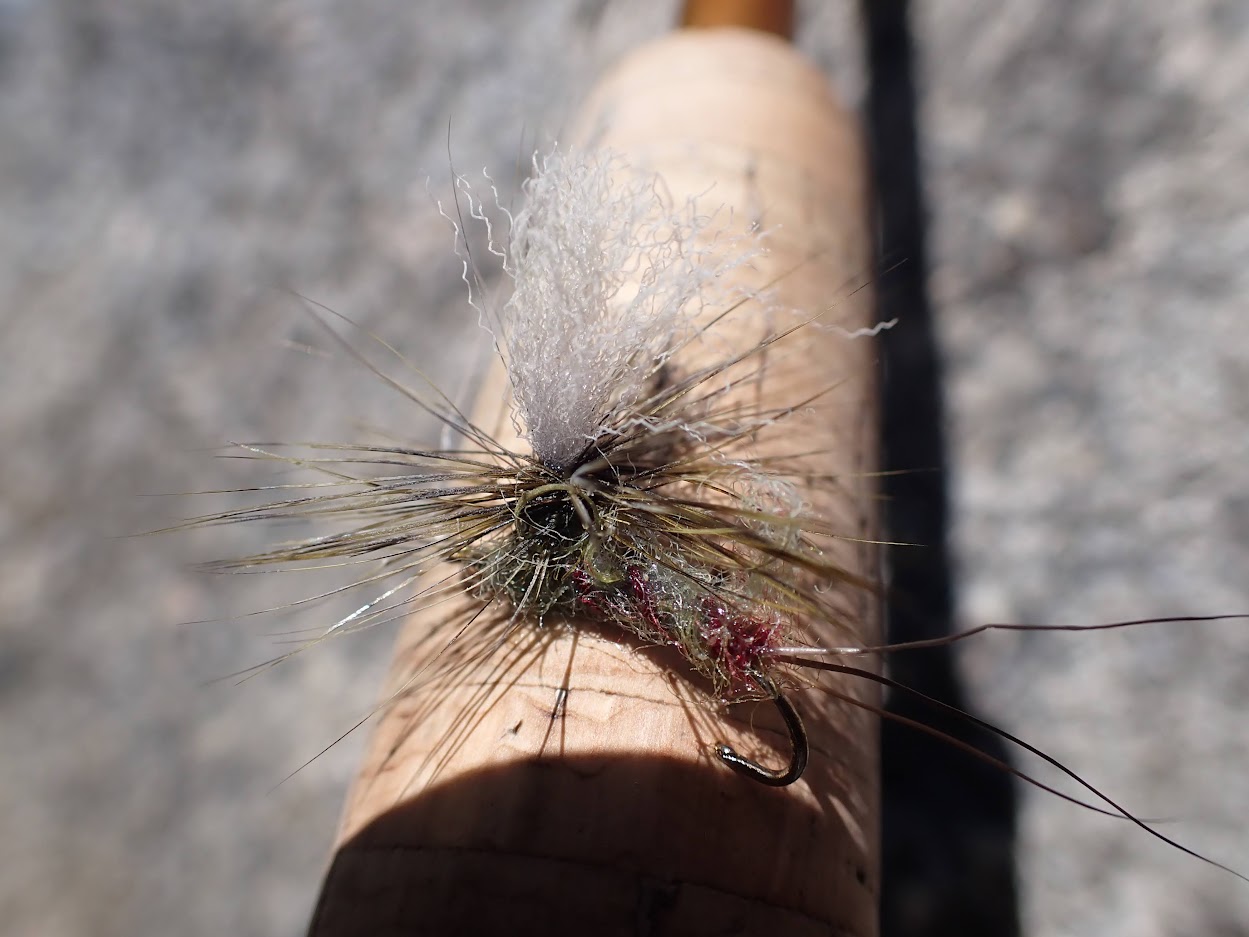 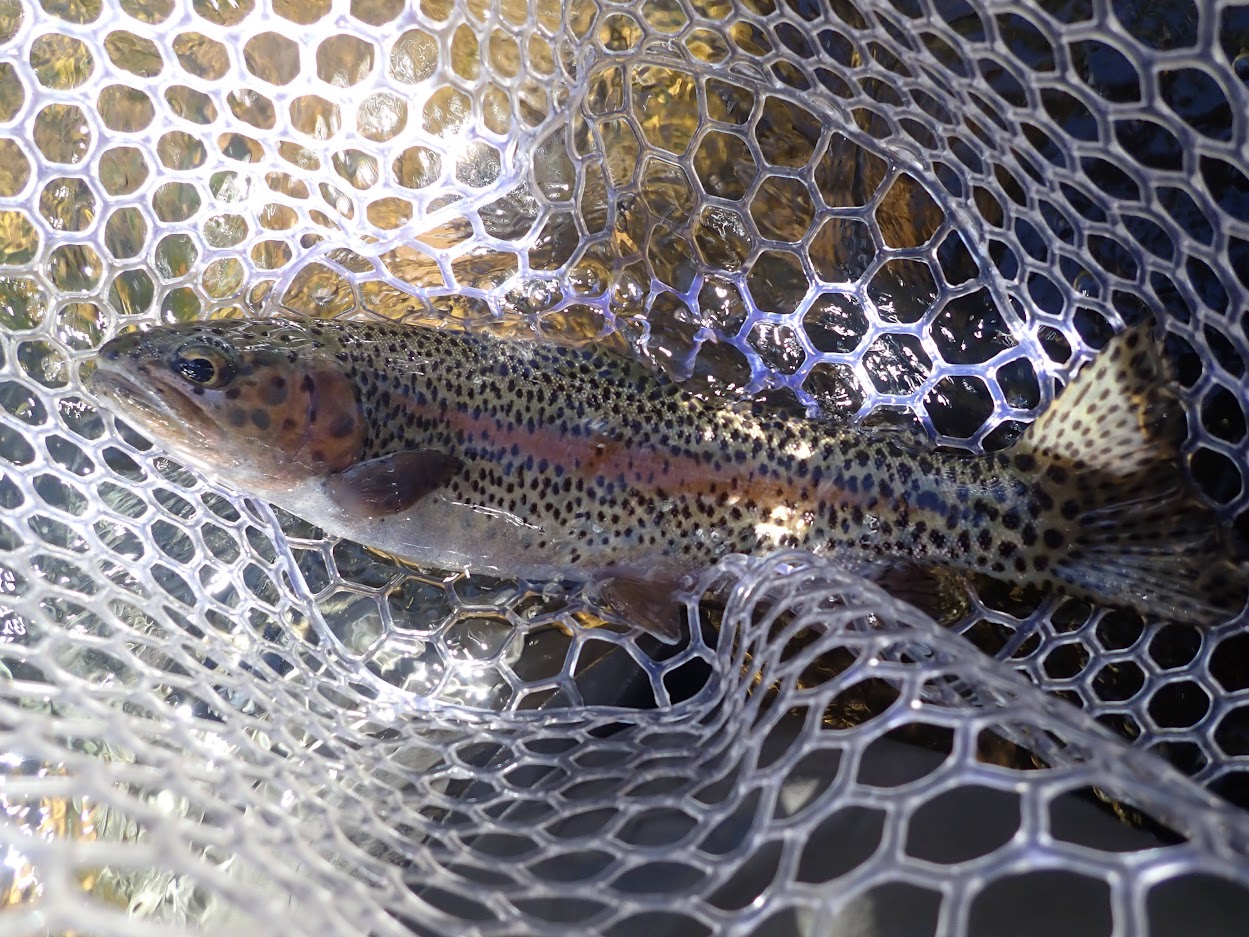 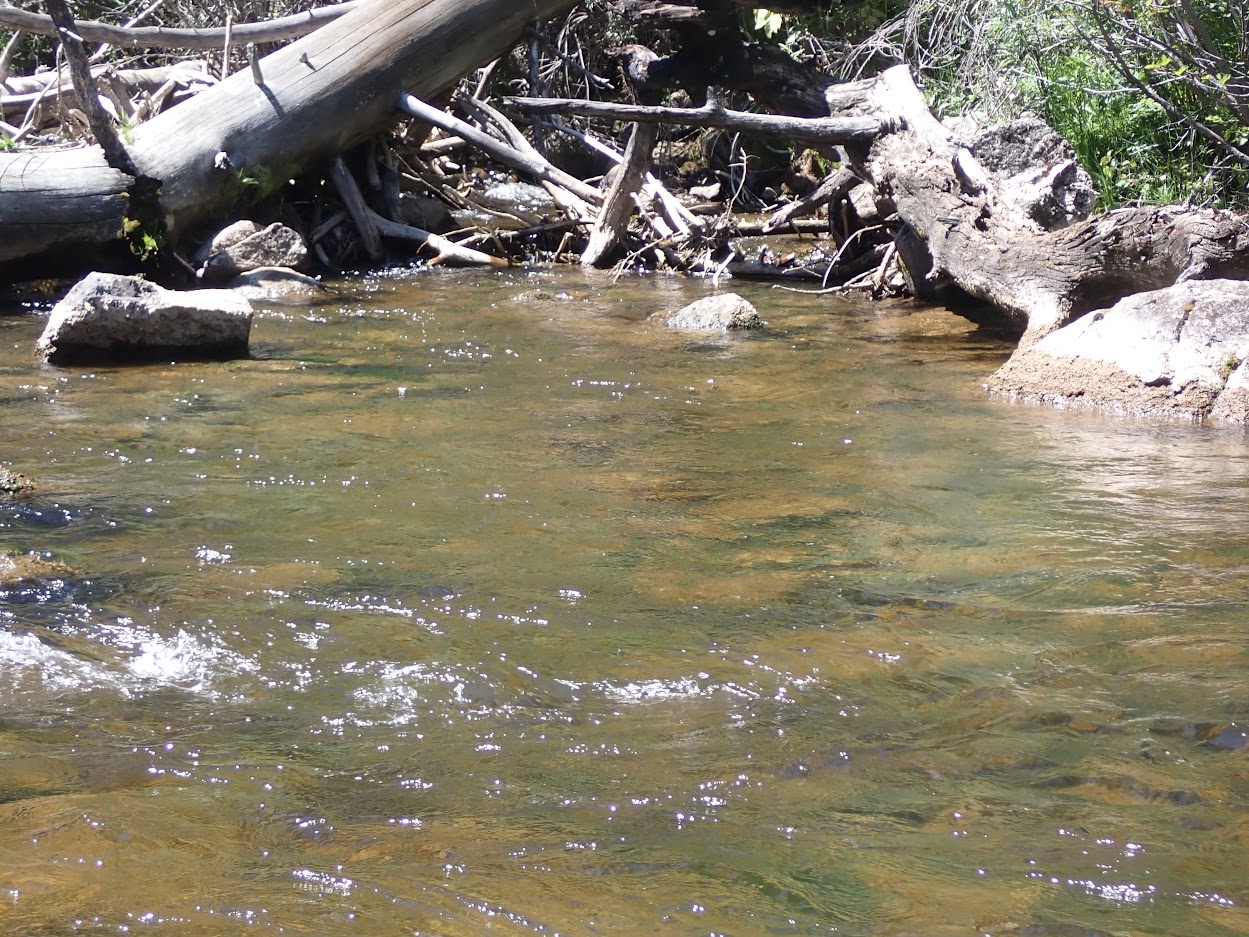 Brown Trout Smacked My Fly Near the Stick Jumble

After lunch I decided to revert to the poly wing parachute that yielded ten trout in the morning, and this move proved to be a winner. The fish count rocketed from thirteen at lunch to fifty-two on the day. Whew! The action was torrid between 12:15PM, when I finished lunch, and 2:00PM, when I notched number forty. The pace slowed measurably from 2:00PM until 3:00PM, but I did manage to sag my net seven additional times to reach forty-seven. During this time a second poly wing parachute joined its cousin in the retired fly patch, as the hackle climbed up the wing post. The third poly wing remained on my line, until I returned to my car at the end of the day. 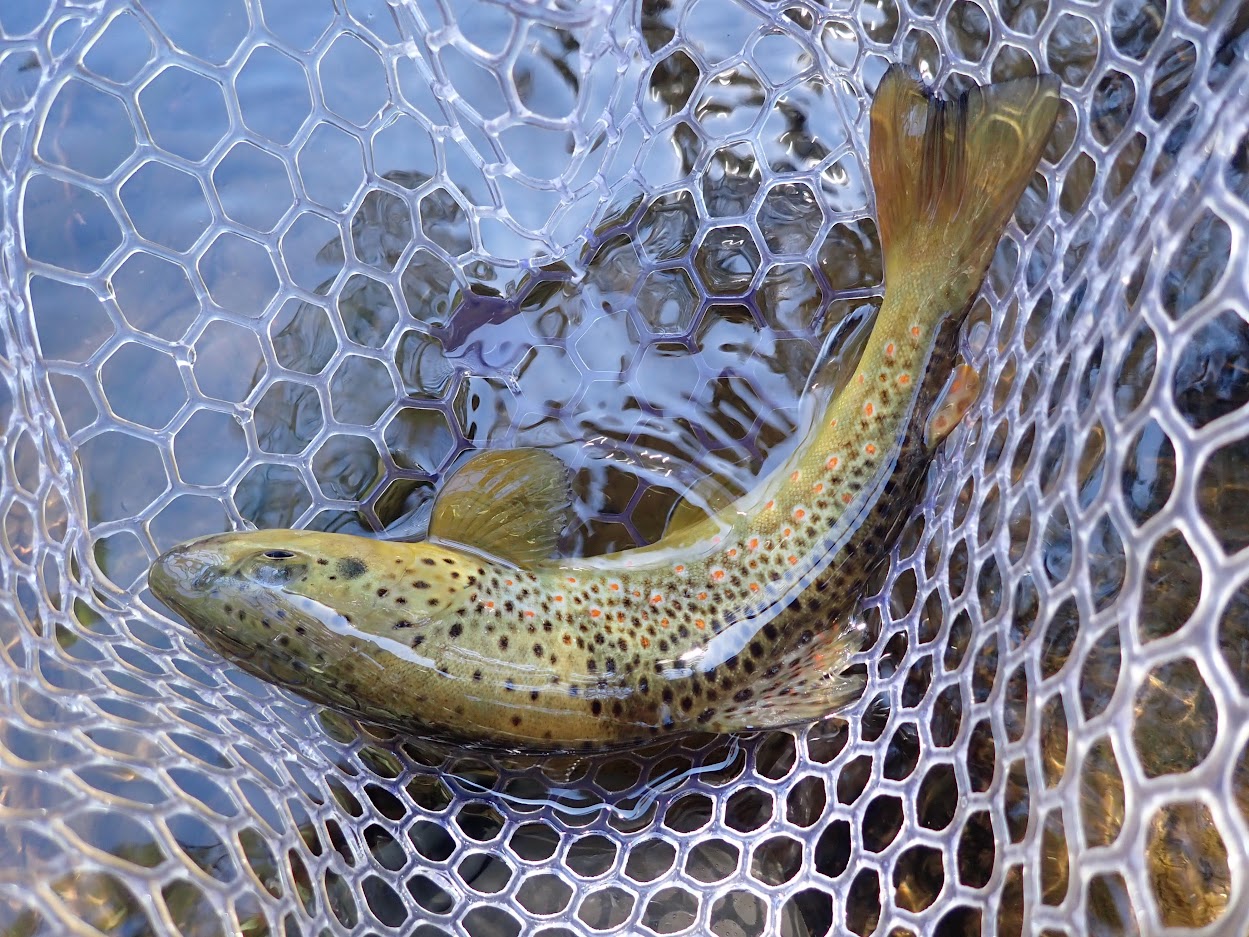 Of course, the largest fish on the day only extended the tape measure to twelve to thirteen inches, and I landed around eight in this dimension range. The trout density was amazing, and a first cast to prime water nearly always elicited a strike. I spotted four or five natural green drakes in the 12:30PM to 1:30PM window, so the hatch was not very dense, but the South Boulder Creek trout never miss a shot at a large meal such as the western green drake. 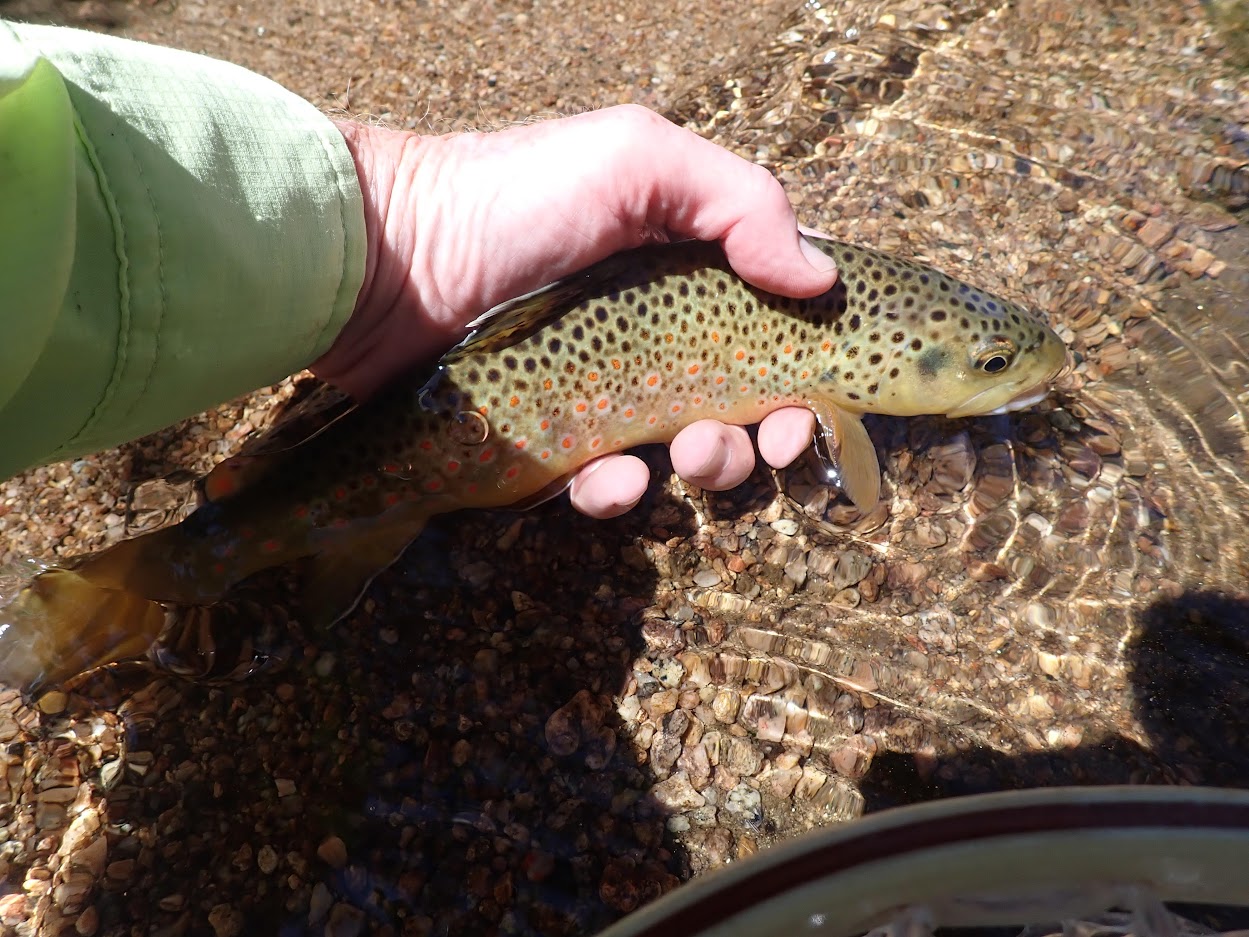 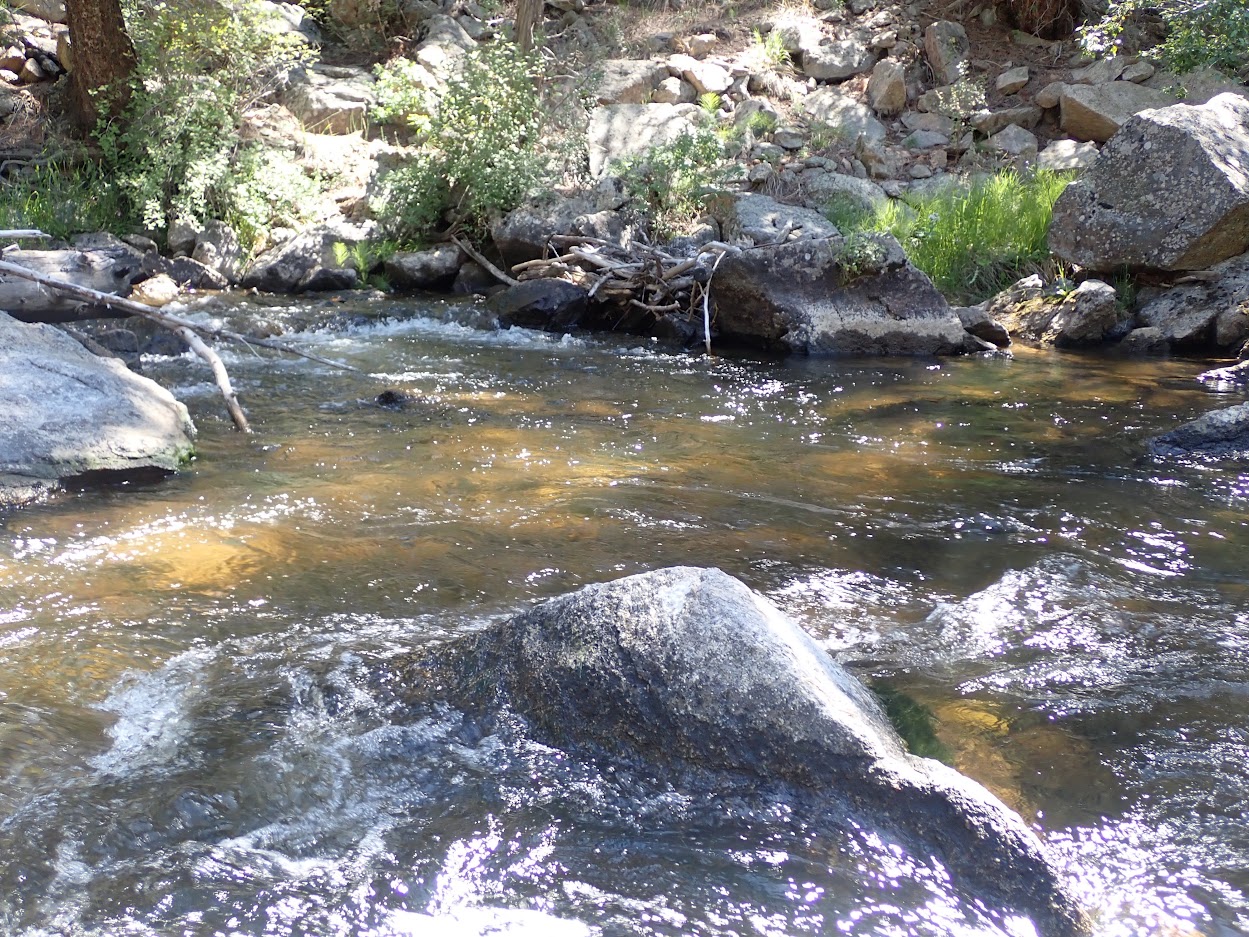 During my hike back to the parking lot I stopped and cherry picked a few prime pools and supplemented the fish count with an additional five to reach fifty-two. Hopefully a few more encounters with green drake madness will greet my calendar in 2022 on South Boulder Creek. My fingers are crossed.