March Madness. April Insanity. Now I offer August Mayhem. I continued my 2020 pursuit of green drake hatches on Tuesday, August 11, and I was not disappointed.

A dentist appointment on Monday and doctor appointment Thursday precluded a long fishing/camping trip on the week that began on August 10, so I designated the week for Front Range stream exploration. Bear Creek, the Cache la Poudre, and the North Fork of St. Vrain Creek were the only Front Range systems, that I touched in the months following my surgery. When I reviewed the DWR stream data, I discovered that the Big Thompson continued to rush down the valley at 280 CFS. Boulder Creek flows were promising, but I was averse to dealing with the construction delays in the canyon. The Bear Creek and the Cache la Poudre graphs were depicting ridiculously low flows, and I was concerned about the safety of the fish. I guided my eleven year old friend, Lucas, on the North Fork of the St. Vrain on Friday, and the conditions were challenging. This left Clear Creek and South Boulder Creek. Fortunately Clear Creek numbers were down to 93 CFS, and my ideal range for the nearby creek west of Golden is 50 – 100 CFS. South Boulder Creek continued to rush through the canyon below Gross Reservoir at 168 CFS, which is a bit higher than I prefer. I reviewed posts on this blog for prior visits to South Boulder Creek In early August at relatively high flows, and I discovered that trout were willing risers to green drakes despite the increased volume of water. This clinched my decision, and I made the short drive to South Boulder Creek for a day of fly fishing. 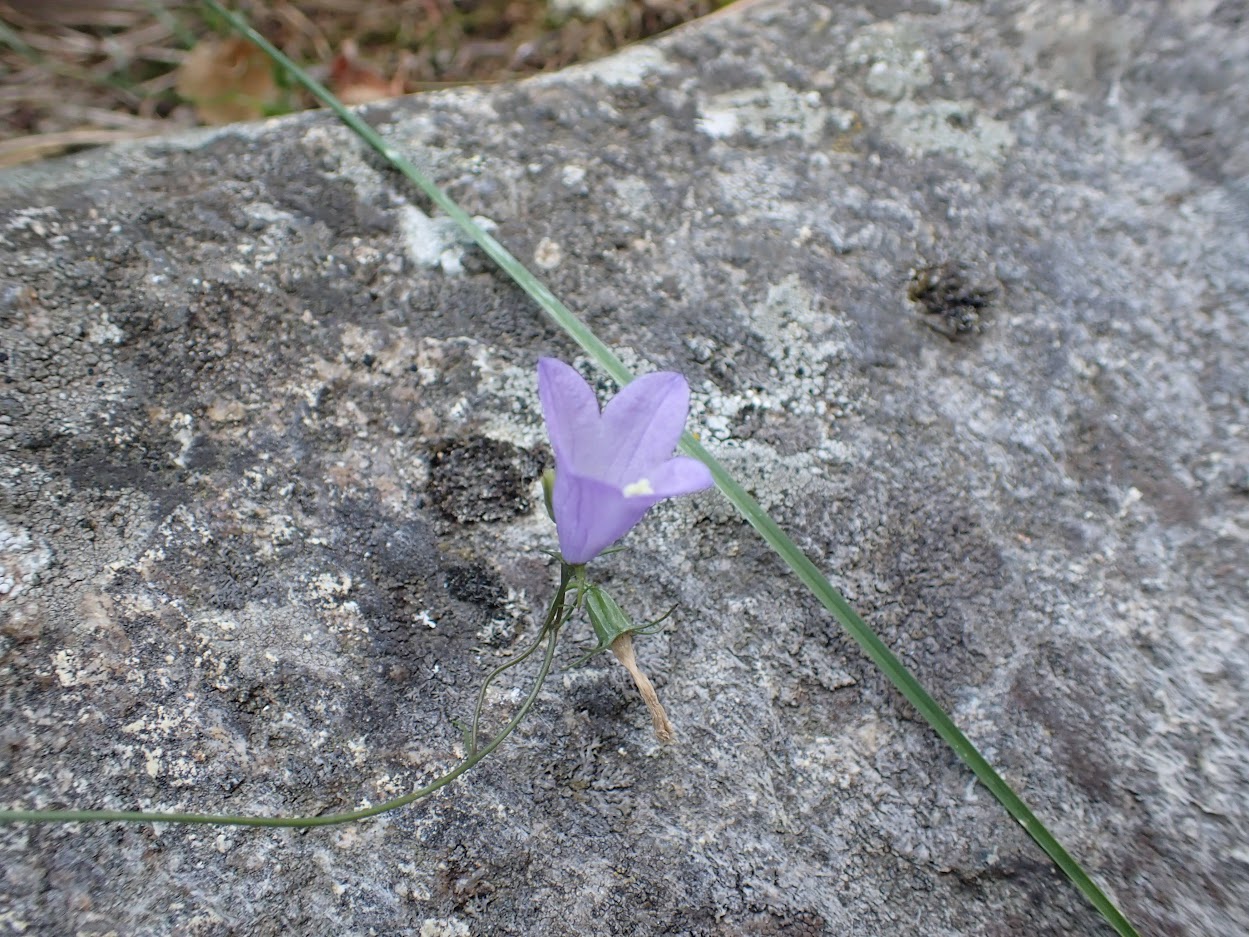 The Will to Live

Two vehicles occupied the parking lot when I arrived, and I applauded that circumstance. The air temperature was around 70 degrees and the high for the day topped out just under 80 degrees. Clouds blocked the sun for much of my time in the canyon, and the cold bottom release water kept me comfortable during my five hours on the stream. I put together my Sage four weight and jumped in my waders and hiked down the steep trail to the creek and then continued for a decent distance, before I began fishing at 10:00AM. 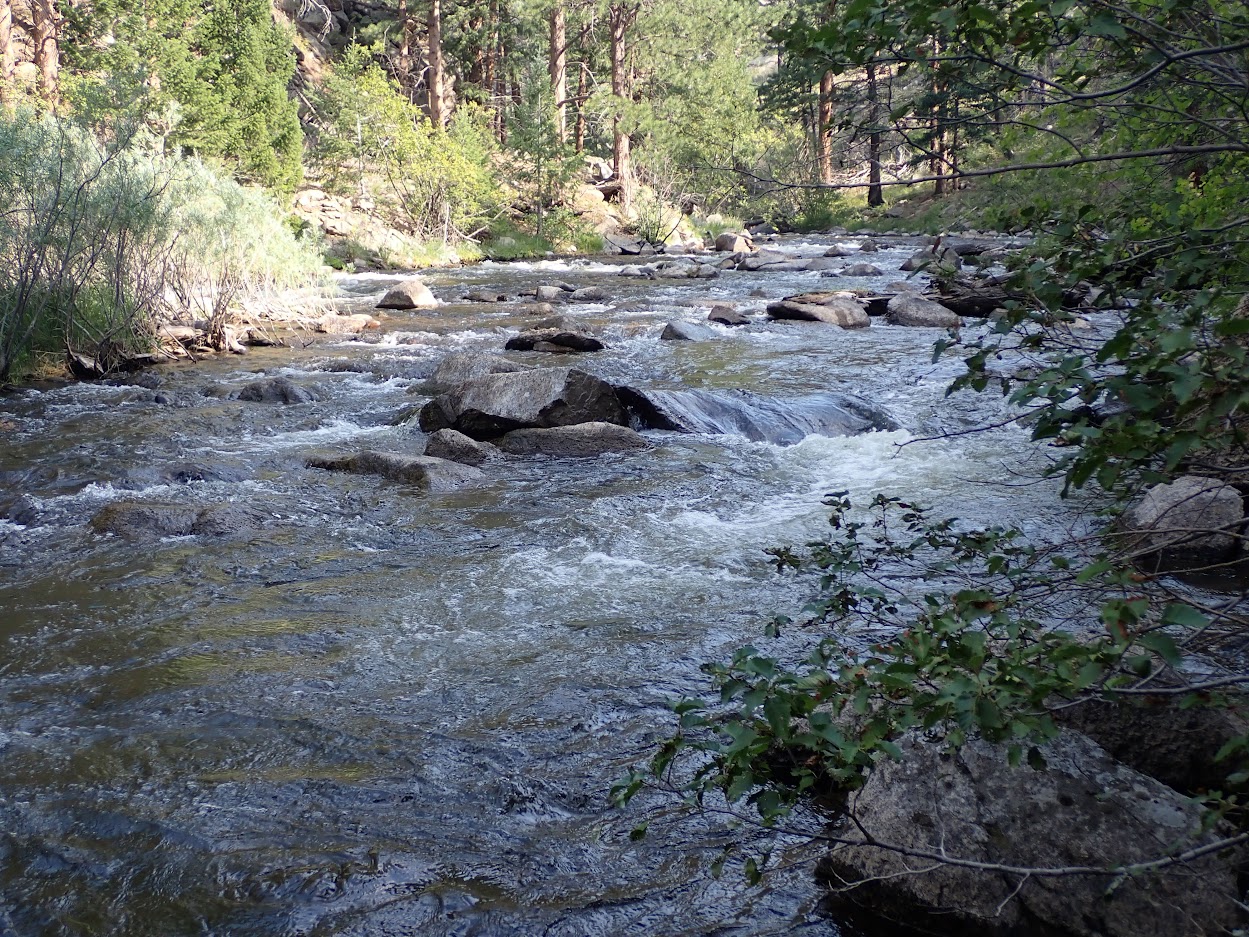 My research informed me that green drakes were present in early August, so I debated whether to start with a dry/dropper featuring a beadhead prince as a drake nymph imitation or alternatively to launch my day with a double dry incorporating a green drake dry fly. I opted for the latter and configured my line with a peacock body hippie stomper trailing a parachute green drake on an eight inch dropper. In the first fifteen minutes I landed three trout, and all confidently inhaled the parachute drake. I was off to a fast start, and I gave myself a mental pat on the back for electing the double dry approach. 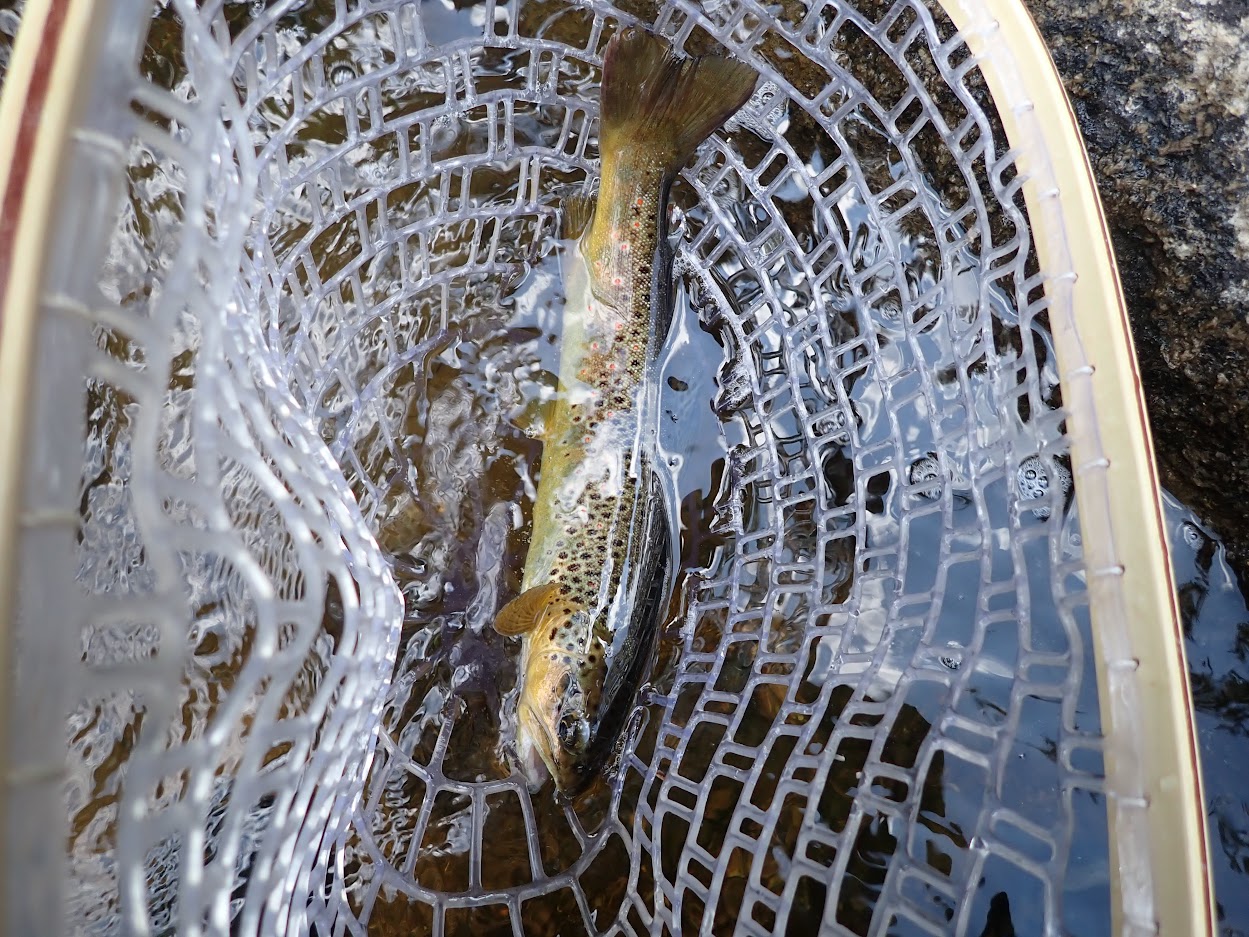 The positive beginning quickly morphed into frustration, as the next two trout that I hooked sought the safety of some underwater logs. I was unable to prevent their sudden dives, and I lost both fish along with three flies. In the first instance the hippie stomper and parachute green drake broke off, and in case number two the green drake separated, while I salvaged the hippie stomper. These irritating interruptions to my positive fishing vibe were the only such occurrences during the day, but I was frustrated nonetheless. 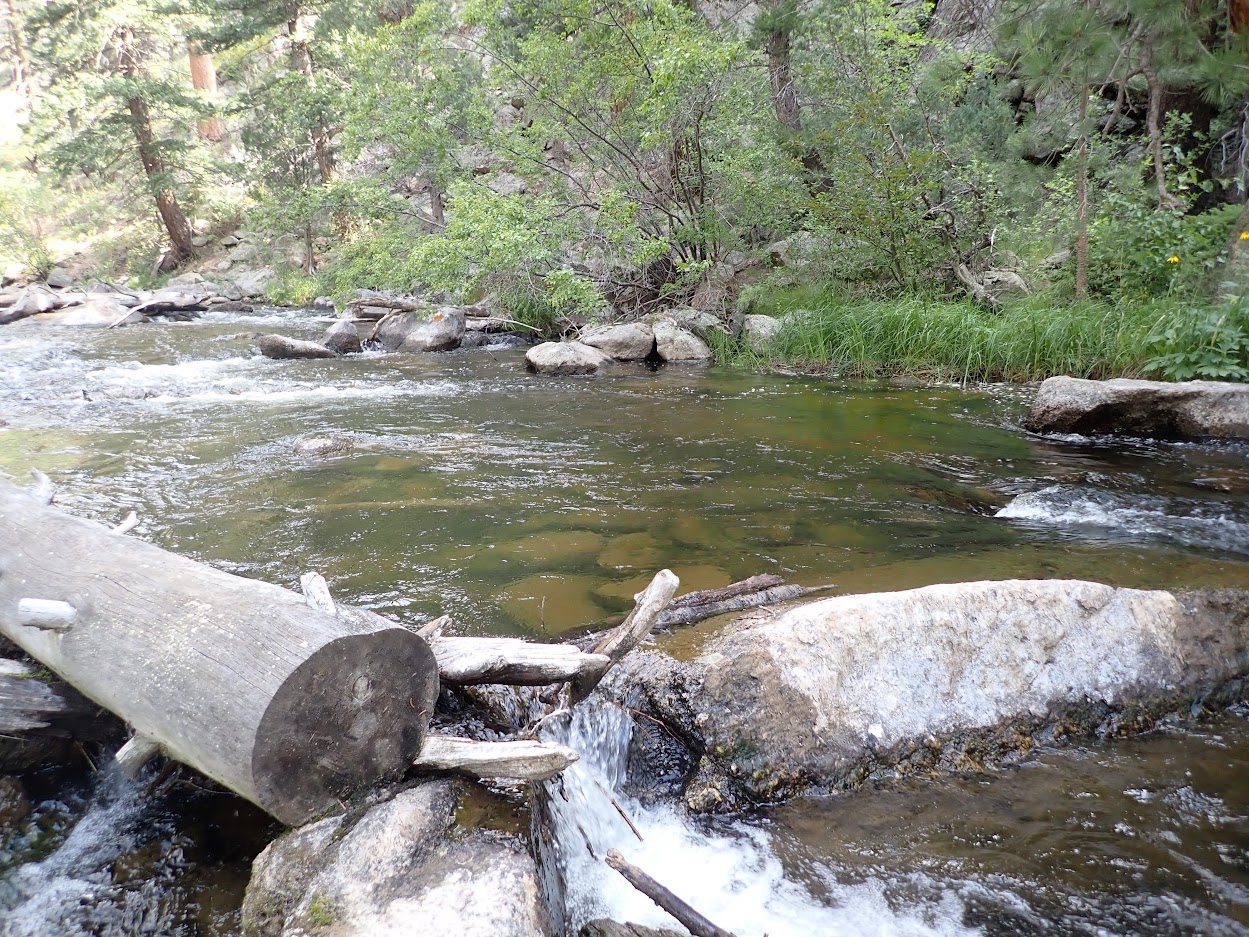 With the early loss of two green drake flies, my concern grew over whether I stocked adequate quantities, so I replaced the comparadun with a Harrop hair-wing. The hair-wing version performed reasonably well, as the fish count mounted to twelve before lunch, but much of this success was attributable to the appeal of the hippie stomper. Most of the early trout were browns, and several feisty twelve inch beauties rested in my net. 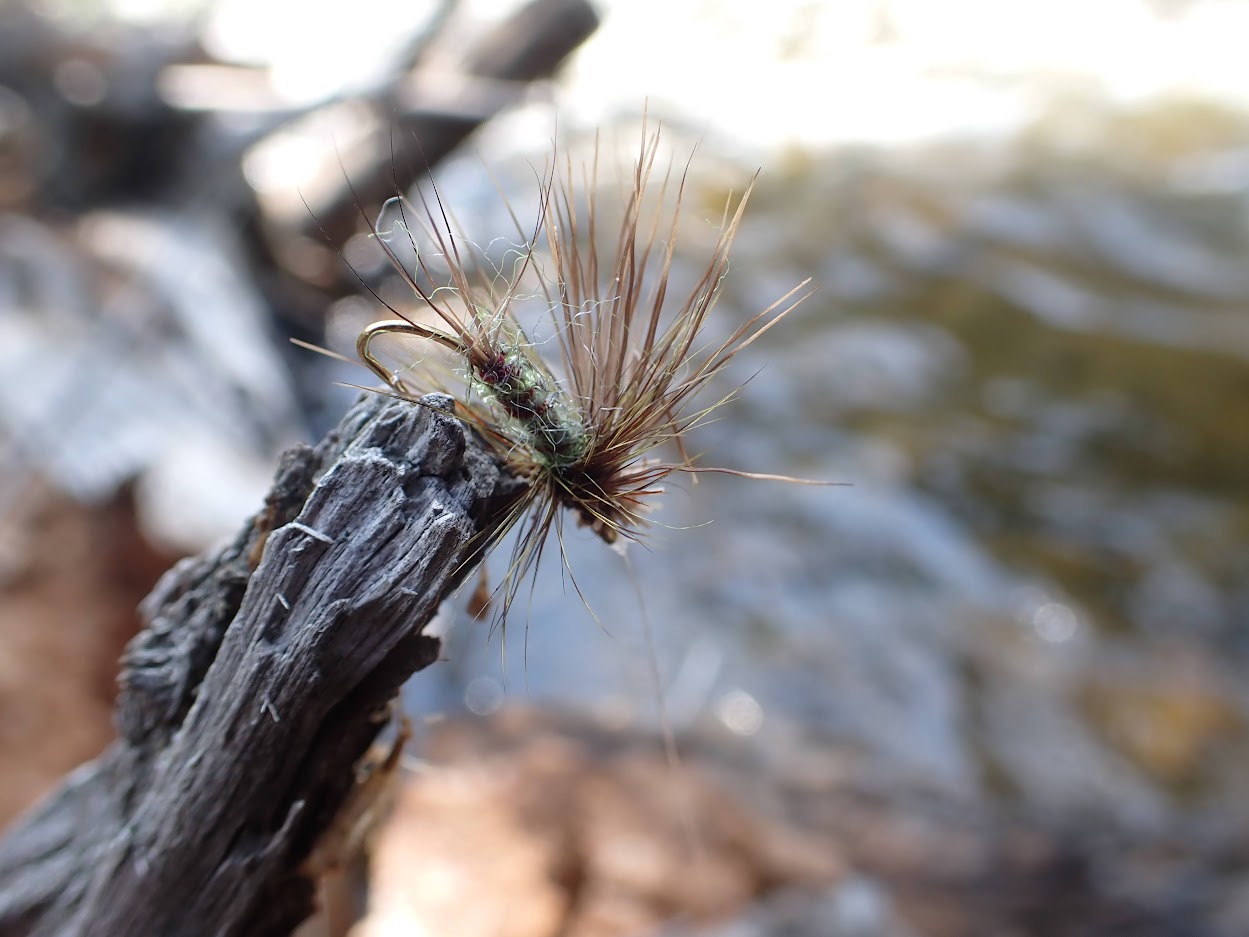 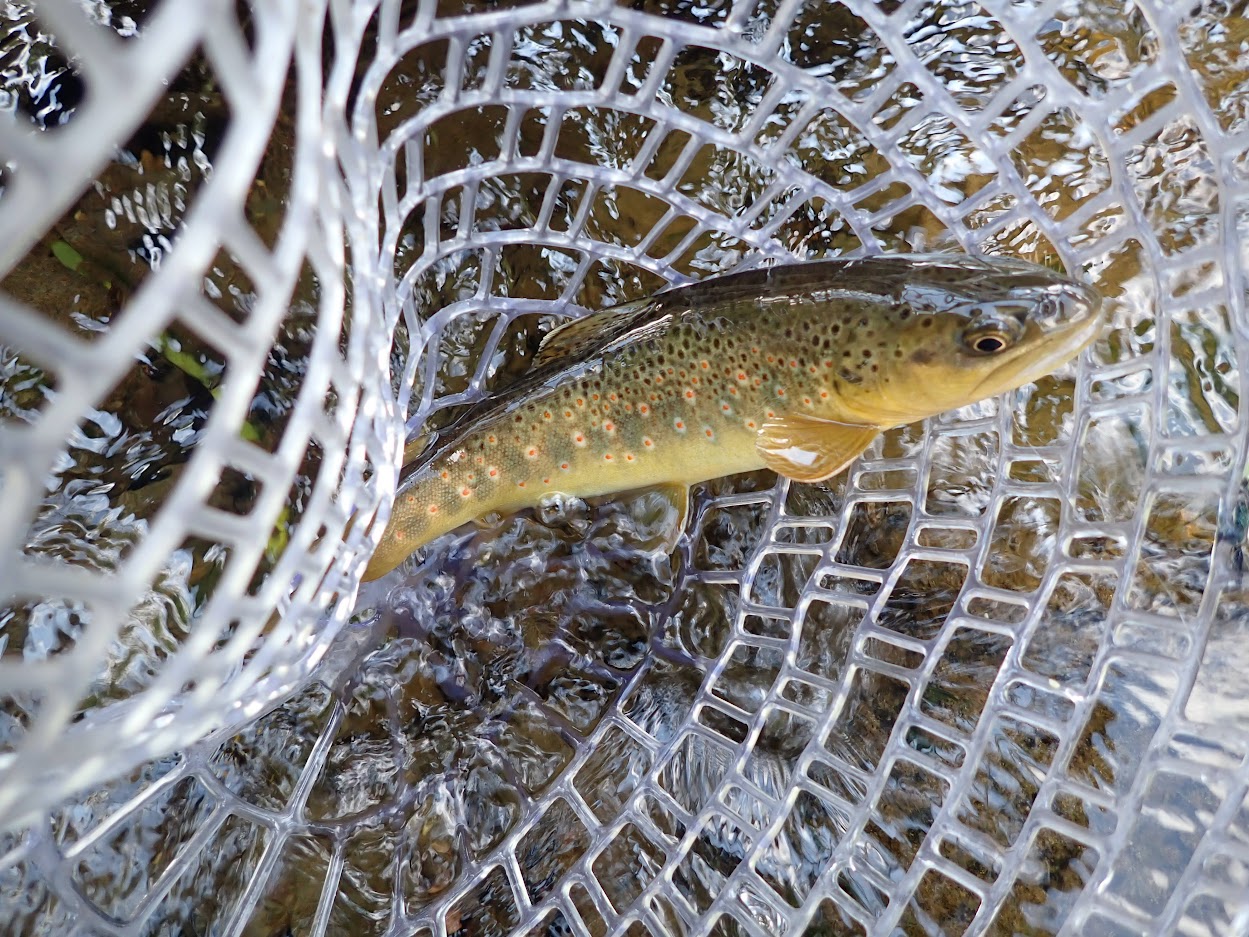 After lunch I continued with the same approach that provided me with enjoyment in the morning. The hippie stomper remained in place as the front fly until 2:30, however, I rotated the point fly among the Harrop hair-wing, user friendly, and comparadun. During this time frame the trout preference shifted, and the stomper became more of a visual indicator, while the trailing green drake imitations emerged as the item of desire for the local stream residents. 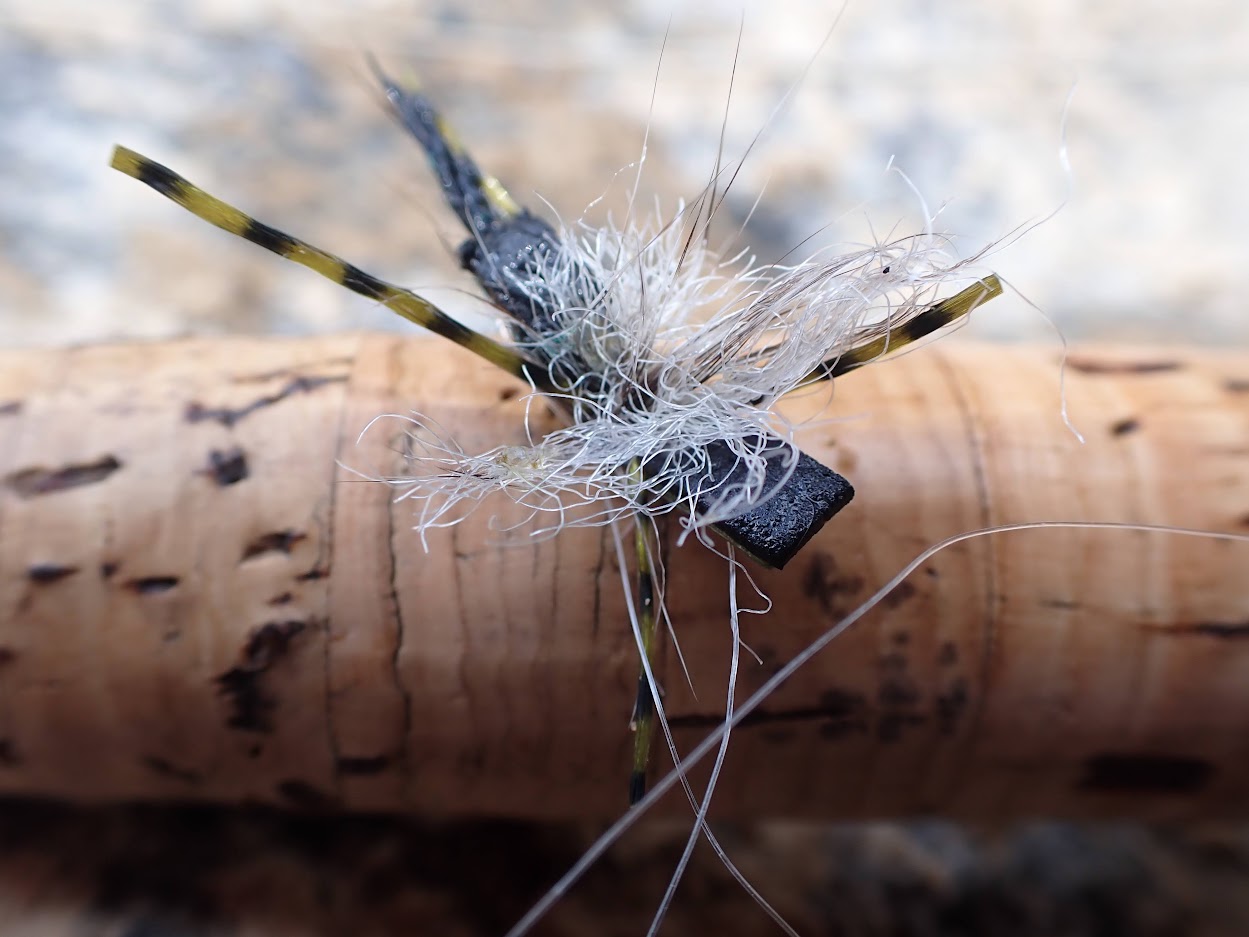 Hippie Stomper in Use 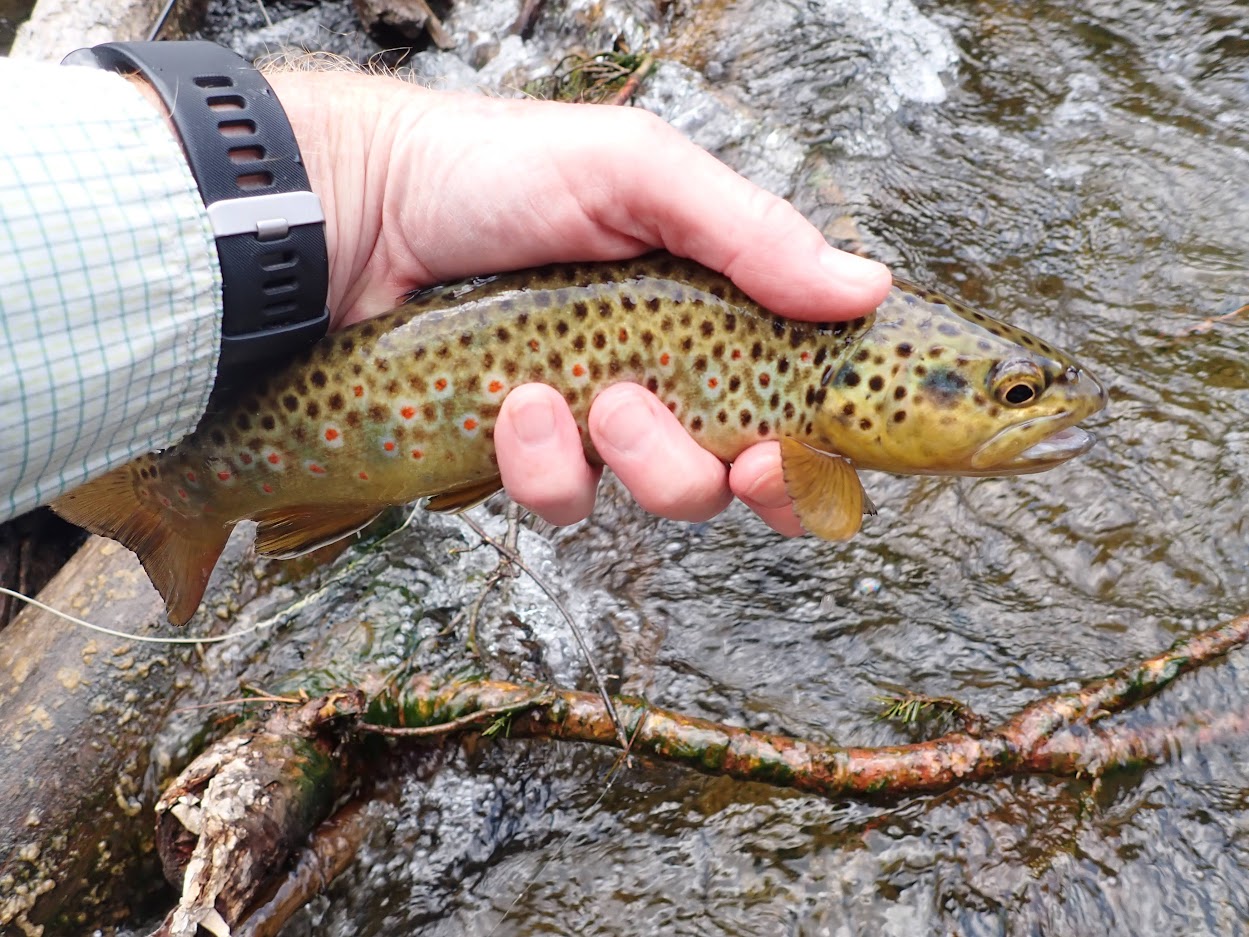 As the fish count attained twenty, the user friendly suddenly seemed to generate refusals, so I downsized the green drake option to a size 14 comparadun, and the trout gave this change a thumbs up. By now I recognized the types of stream structure that produced fish, and I moved more quickly and skipped marginal lies. The fish count climbed through the twenties to twenty-eight, and it was at this time, that I observed four natural green drakes, as they struggled to lift off the cold flowing currents of South Boulder Creek. I anticipated some hot action, but instead noticed four refusals to the hippie stomper. The trout in the canyon were seeing the stomper first, inspecting and rejecting, and never considered the green drake alternative. I decided to abandon the hippie stomper and double dry method and knotted a solo parachute green drake to my line. 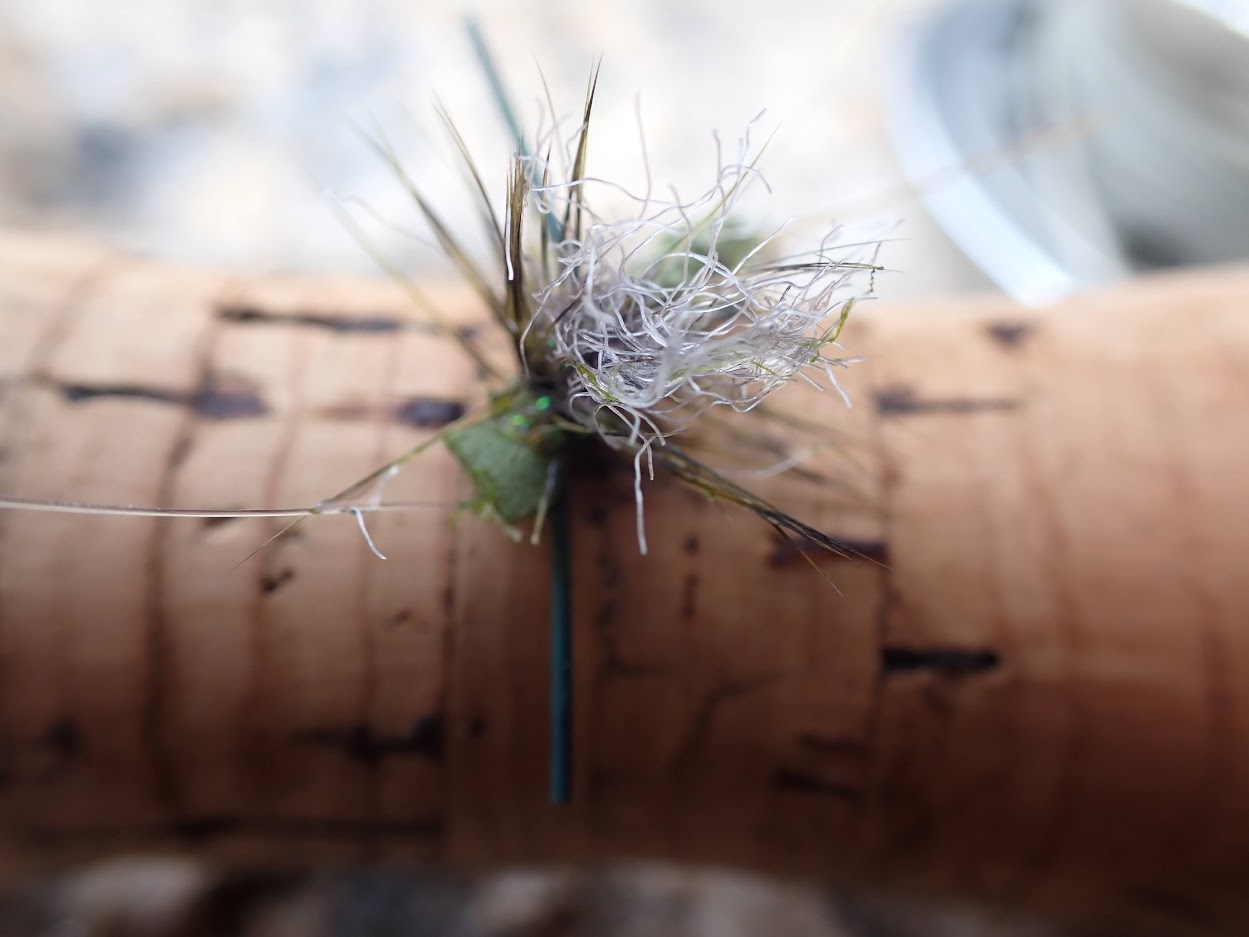 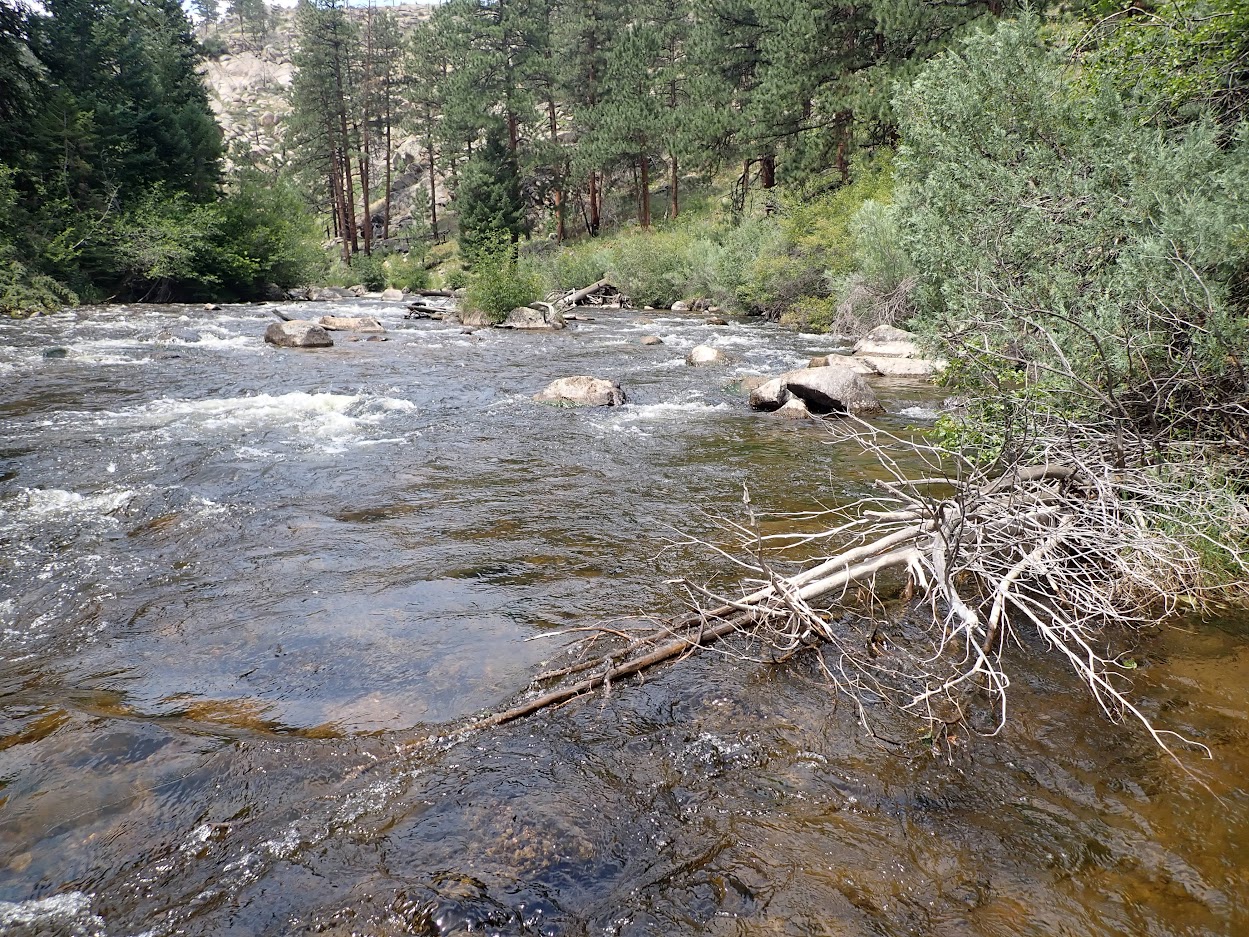 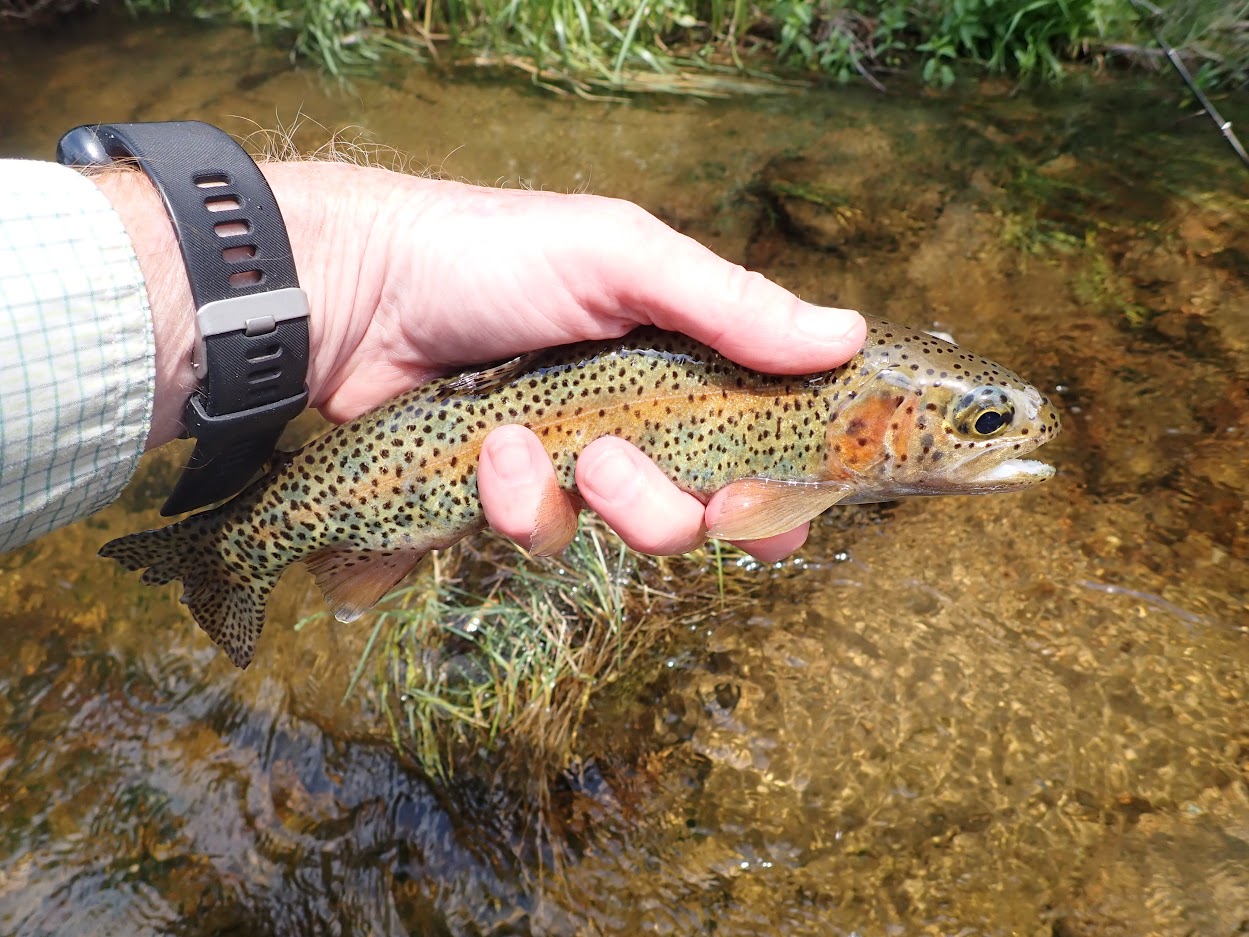 The single dry parachute green drake proved its worth, and the fish count climbed to thirty-three. Although the low riding parachute was more difficult to track and required repeated sopping and dry shake dipping, it seemed to be a solid representation of the actual mayflies. My most effective tactic was to wade above the target area and then lob an across stream cast with an extra dose of slack. I allowed the parachute to drift downstream, and quite a few aggressive trout slammed the green drake fraud near the tail of the run. It seemed that they attacked it, before it escaped over the lip of the slower water. 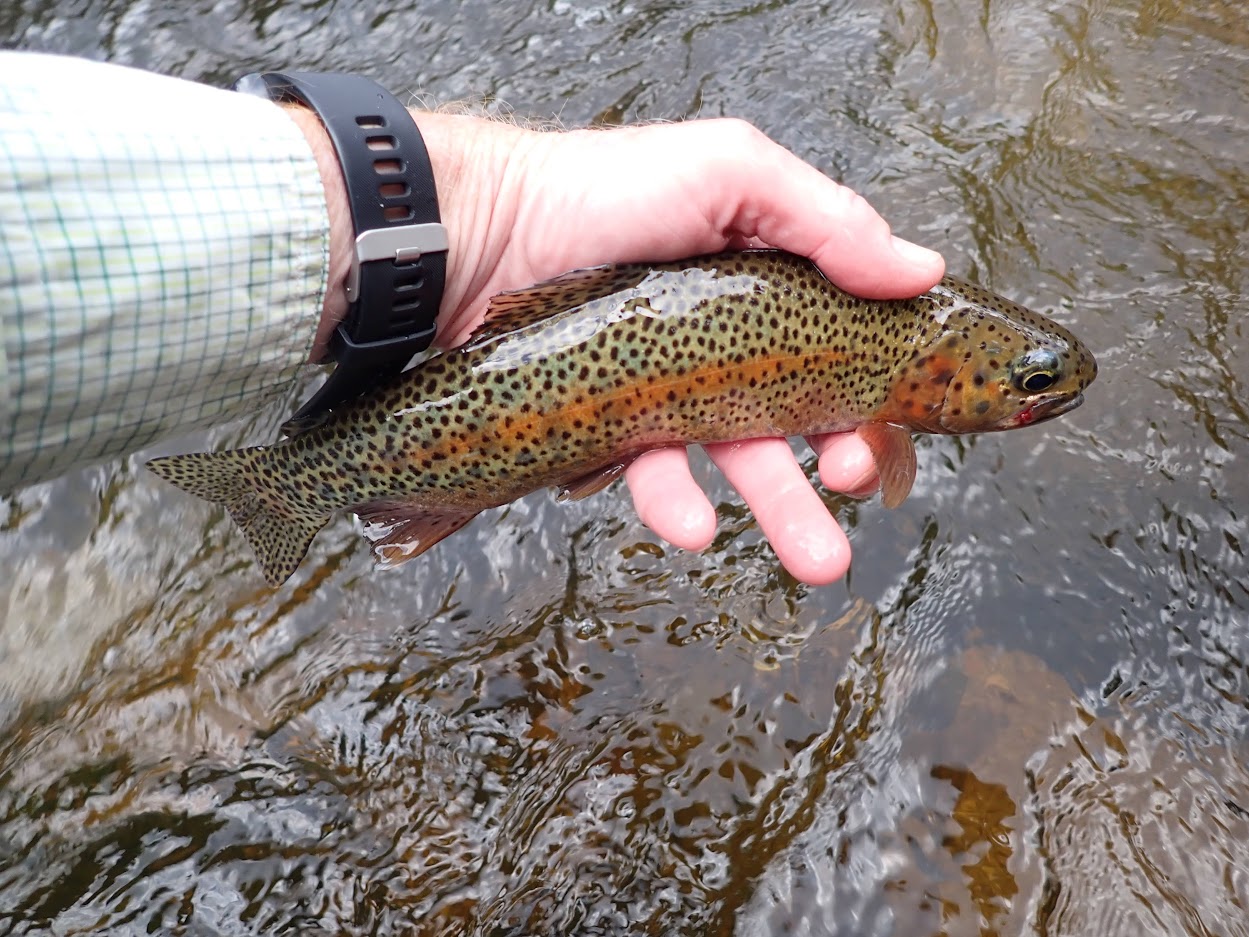 Cannot Get Enough of These South Boulder Creek Rainbows

Number thirty-three was released, as I reached a section of steeper gradient and faster water. At low flows I normally continue to prospect this area, but at 168 CFS wading was a challenge, so I chose to exit and began my march back to the car. As is my custom, I stopped along the return route at two of my favorite pools. The first return hike break proved to be very productive, as I landed five additional trout to raise the count to thirty-eight. Four of the five were hard fighting rainbow trout, and they all responded to the downstream presentation described earlier. 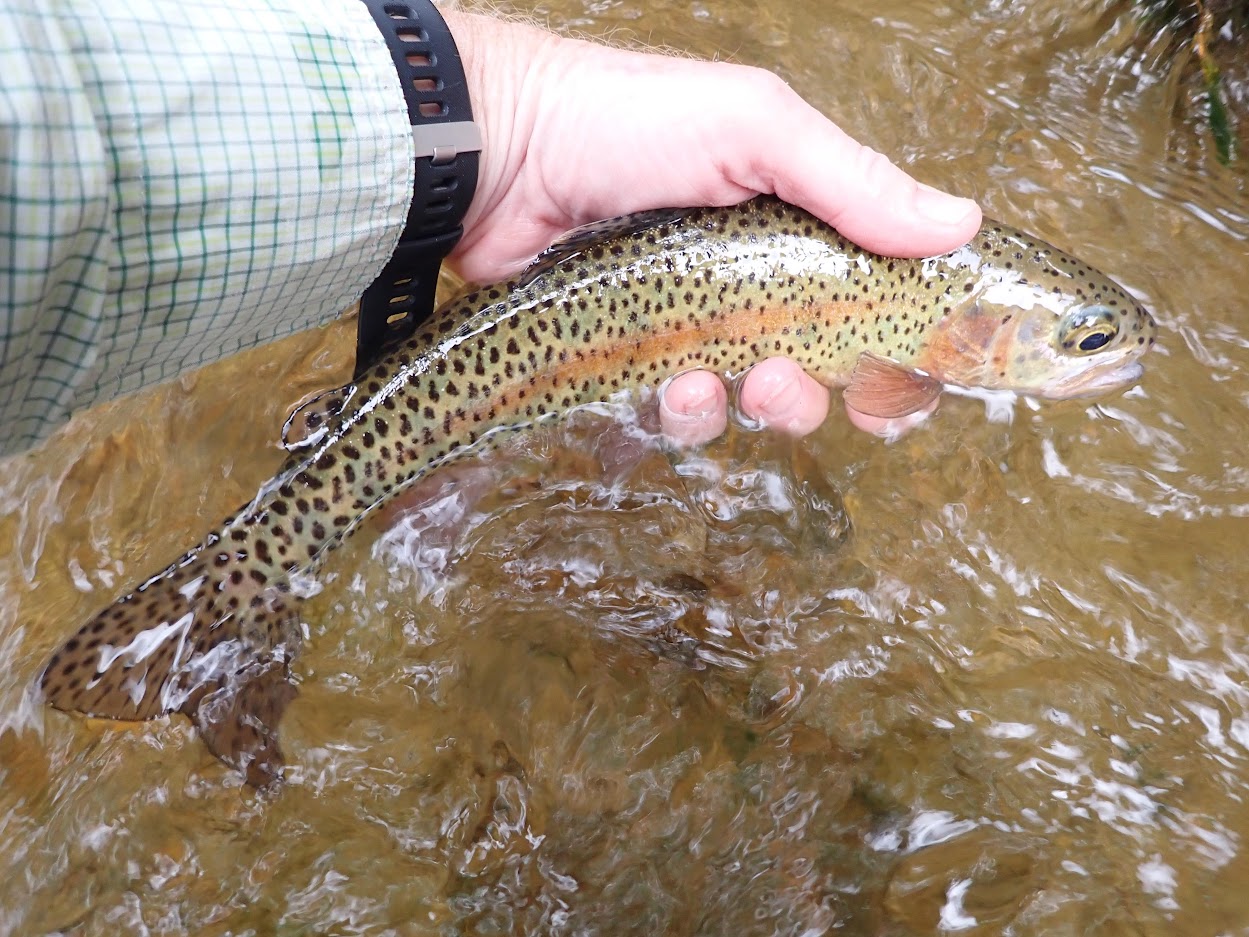 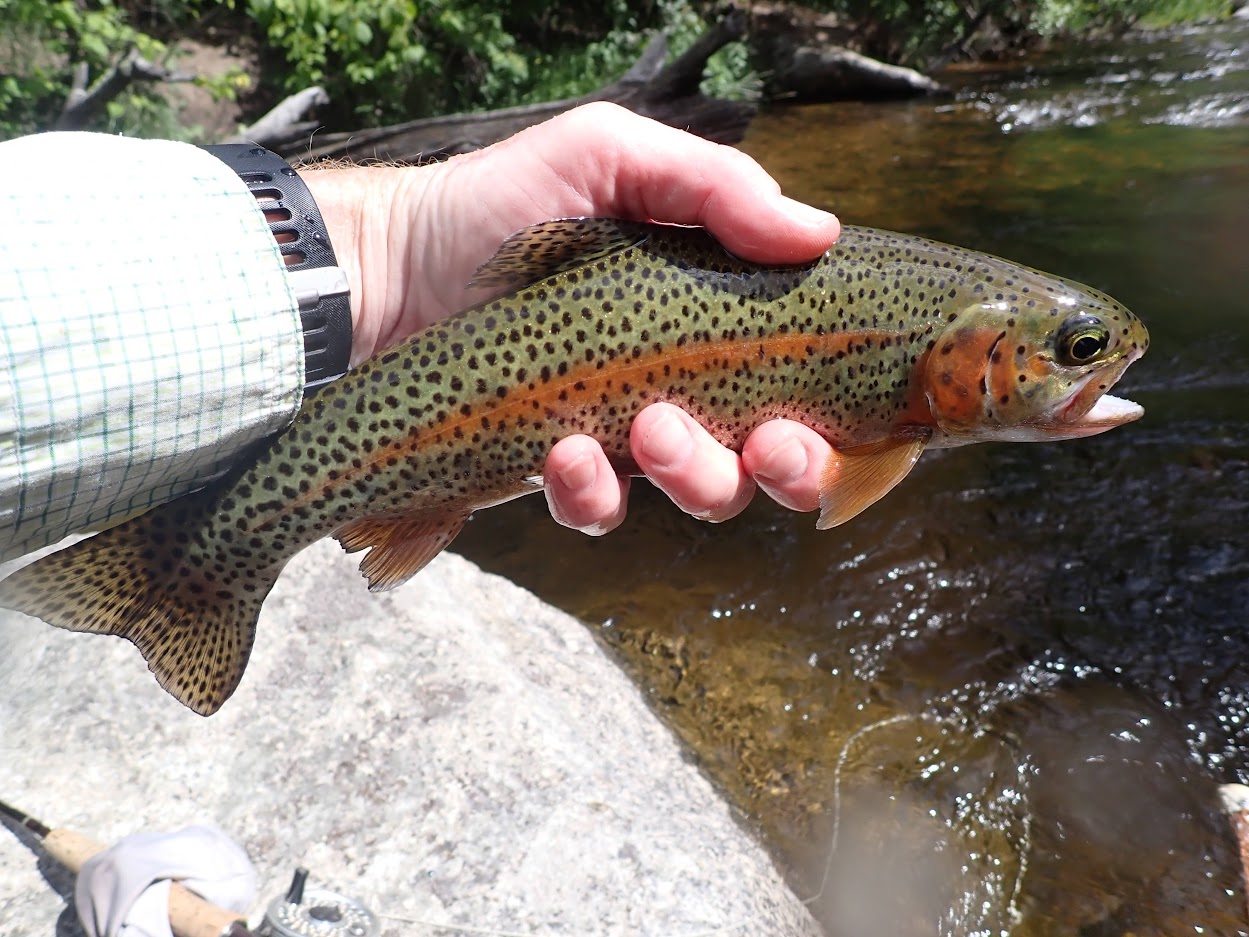 At my final fishing stop I sprayed casts with the parachute drake to all corners of the slower water, but the trout were unimpressed. Meanwhile several risers caught my attention along the right bank next to a few exposed rocks. I targeted them with some expert drifts, but for some reason the parachute drake fell out of favor. In an eleventh-hour attempt to dupe the fussy feeders, I swapped the parachute style for a comparadun. Success! Three more trout inhaled the comparadun including a fine thirteen inch brown that put an exclamation point on my day of fly fishing. I released the deep olive-gold bodied brown and hooked my fly to the rod guide and returned to the Santa Fe. 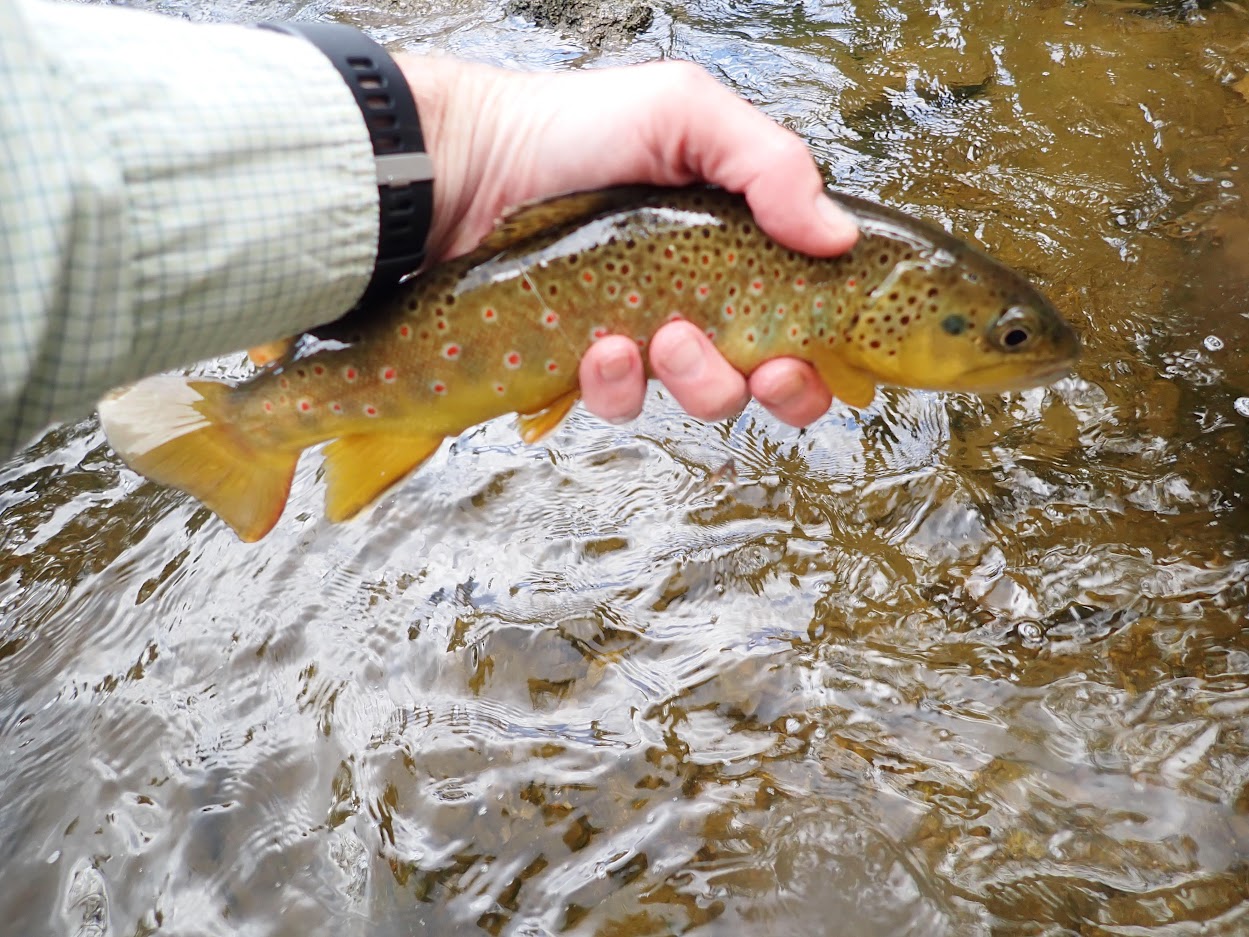 Buttery Gold at the End of the Day 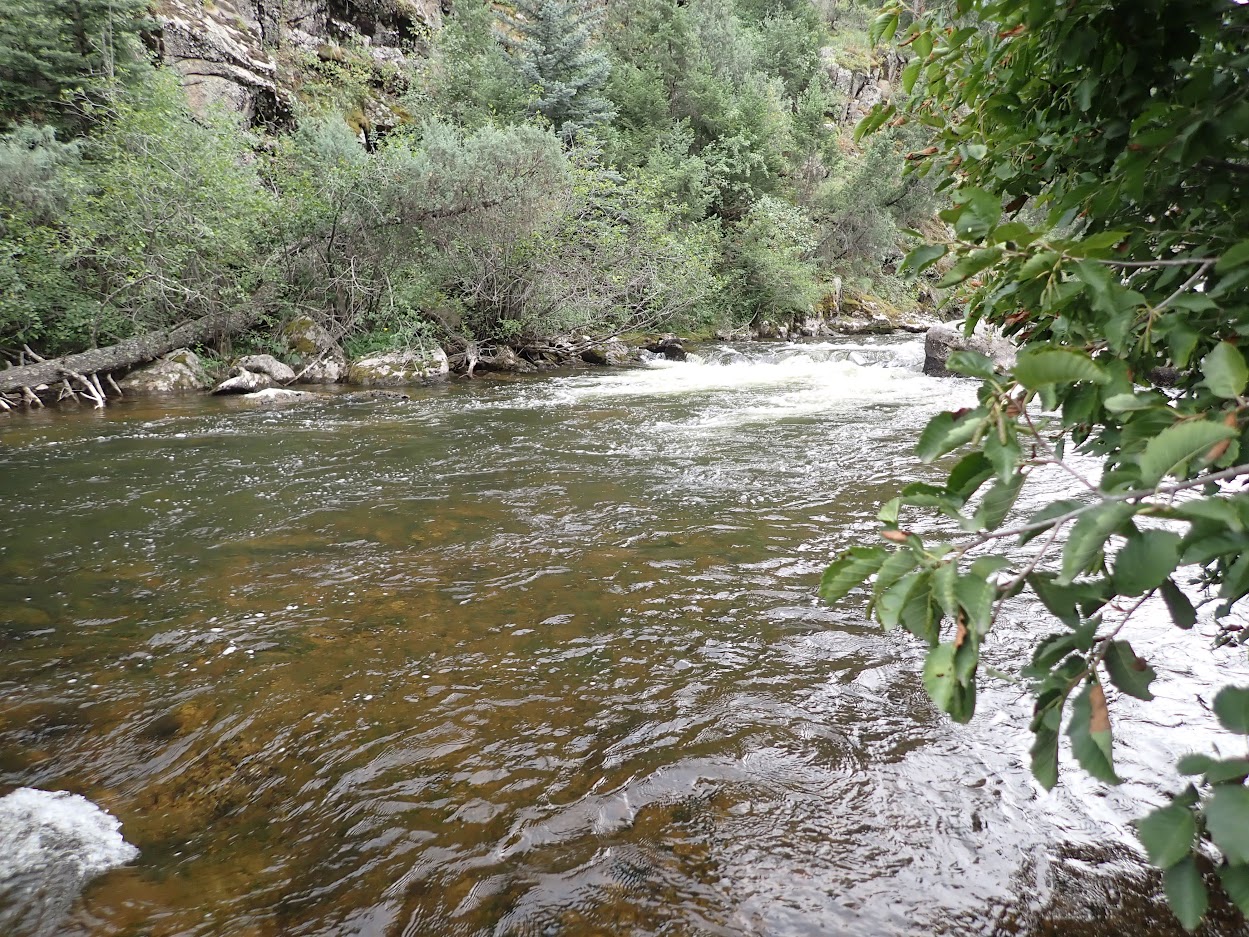 What a day! Forty-one landed trout, and all were taken on dry flies. I never tested the dry/dropper with a prince nymph. although I considered it to start my day. I utilized and caught fish on every style of green drake in my box except for the May break cripple. The higher flows forced me to wade cautiously, however, the large dry flies lured the trout up from the depths. It was rare that promising water failed to deliver on my expectations, and I revel in such fast paced action. All my green drakes proved their worth, although the parachute and compardun styles seemed to outperform the others. If the flows remain favorable, another month of green drake action should be available on South Boulder Creek. I plan to take advantage.