During my last trip to South Boulder Creek on 07/29/2022 I broke my Sage four weight fly rod at 1:30PM, just as I sensed that the fishing was about to explode. On Saturday I made the trip from my home in Denver to Charlie’s Fly Box with the intention of buying a relatively inexpensive backup four weight fly rod to serve my needs for the remainder of the summer, while my old dependable Sage LL got repaired. On Wednesday, August 3, 2022 I found myself once again perched along South Boulder Creek, but in this case I was gripping a brand new Sage nine foot, four weight R8 rod. Instead of a cheap temporary replacement rod, I lightened my wallet to procure the latest top of the line Sage rod. Dave of Charlie’s Fly Box was a good salesman. 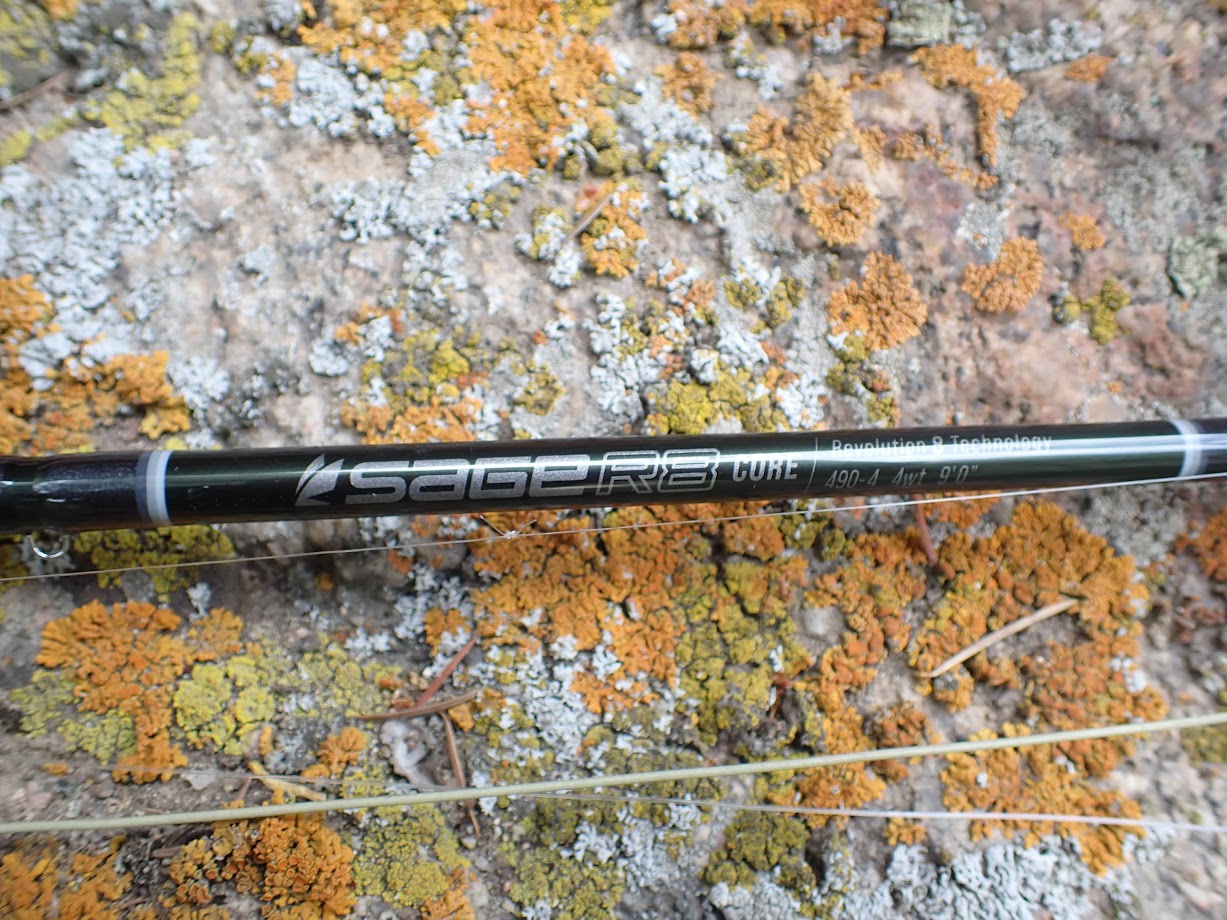 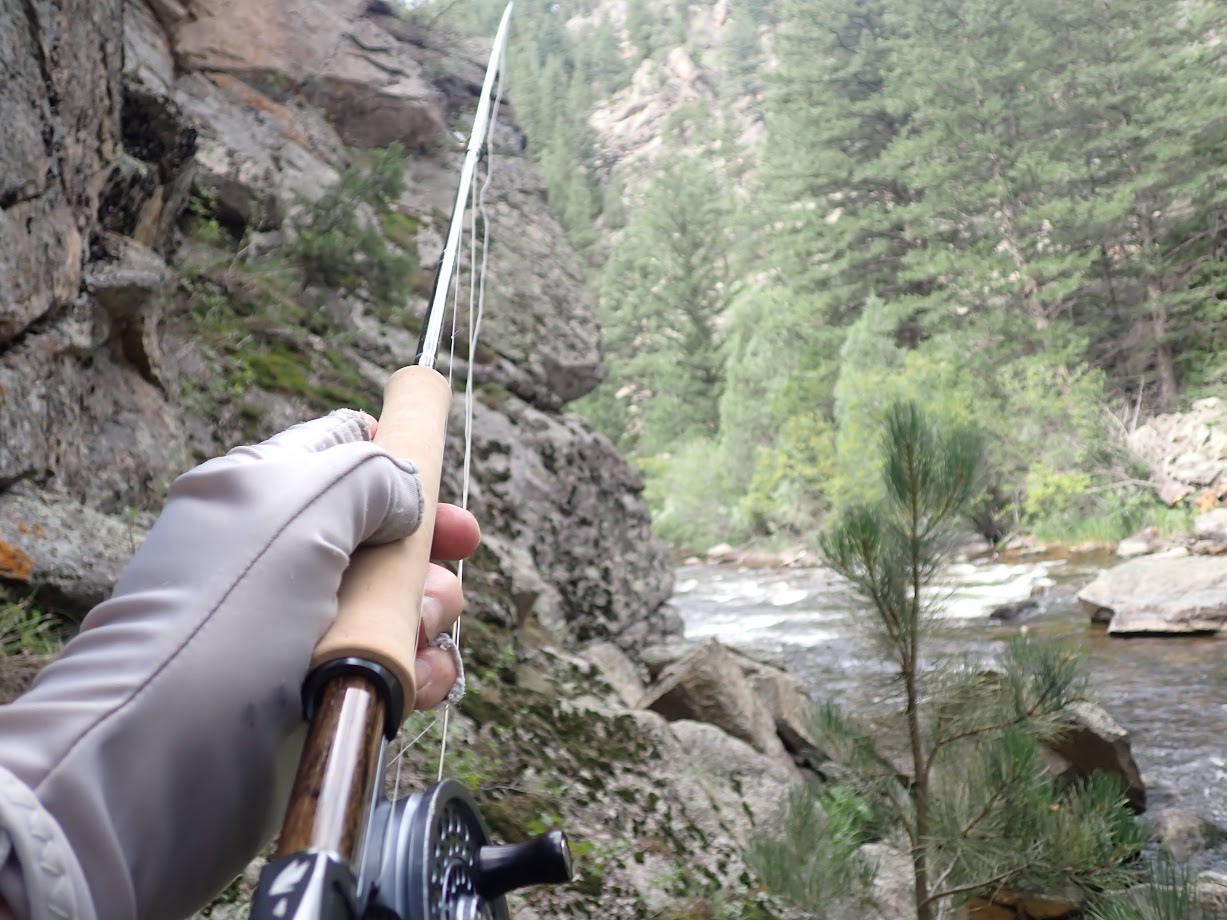 New Rod Ready for a Day of Fly Fishing

I arrived at the kayak parking lot by 9:00AM, and a quick check revealed three additional vehicles in the lot. A guide and two customers were gathered behind one of the cars, so I hustled to beat them to the trail. As I was pulling on my waders and gathering my gear after assembling my new Sage R8, a truck pulled into the parking lot next to the guide group. I did not pay much attention, but within five minutes a young man clad in a navy blue uniform approached and asked to inspect my license. My license was in my backpack, and I had not yet pulled it on, so I removed it from the middle pocket and showed it to the Boulder County wildlife officer. Everything checked out, and I began my descent of the steep trail to the creek shortly thereafter. 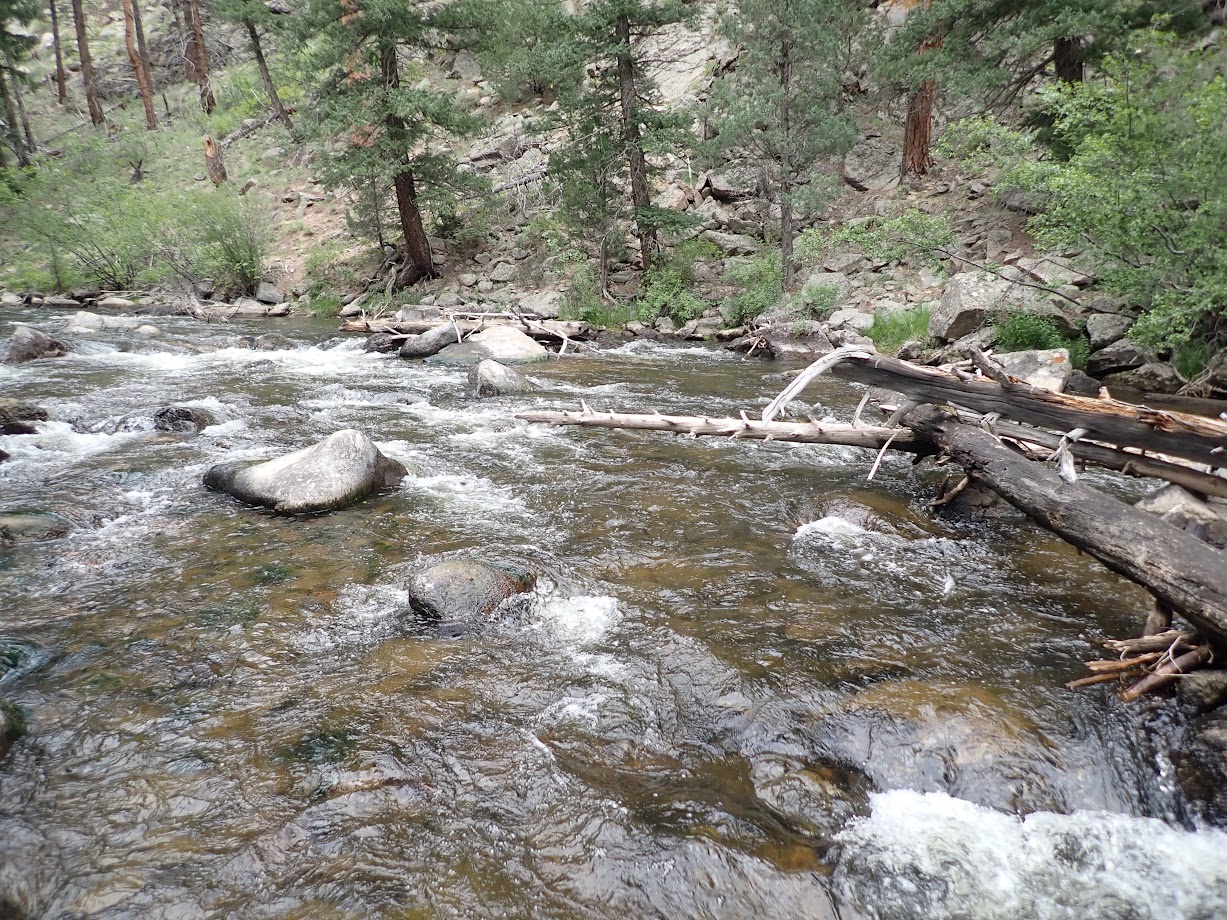 After hiking a moderate distance I positioned myself along the edge of South Boulder Creek and pondered my fly choices. I was anxiously anticipating a green drake hatch, so why not go directly to a drake imitation? I asked myself this question and made the commitment. I tied a solitary size 14 parachute green drake to my line, and in short order I was netting rainbow and brown trout from the creek. The flows were 142 CFS when I arrived, but the water managers reduced the output from the dam to 125 CFS, while I was fishing. The air temperature was in the low seventies as I began, and probably peaked in the upper seventies by the middle of the afternoon. 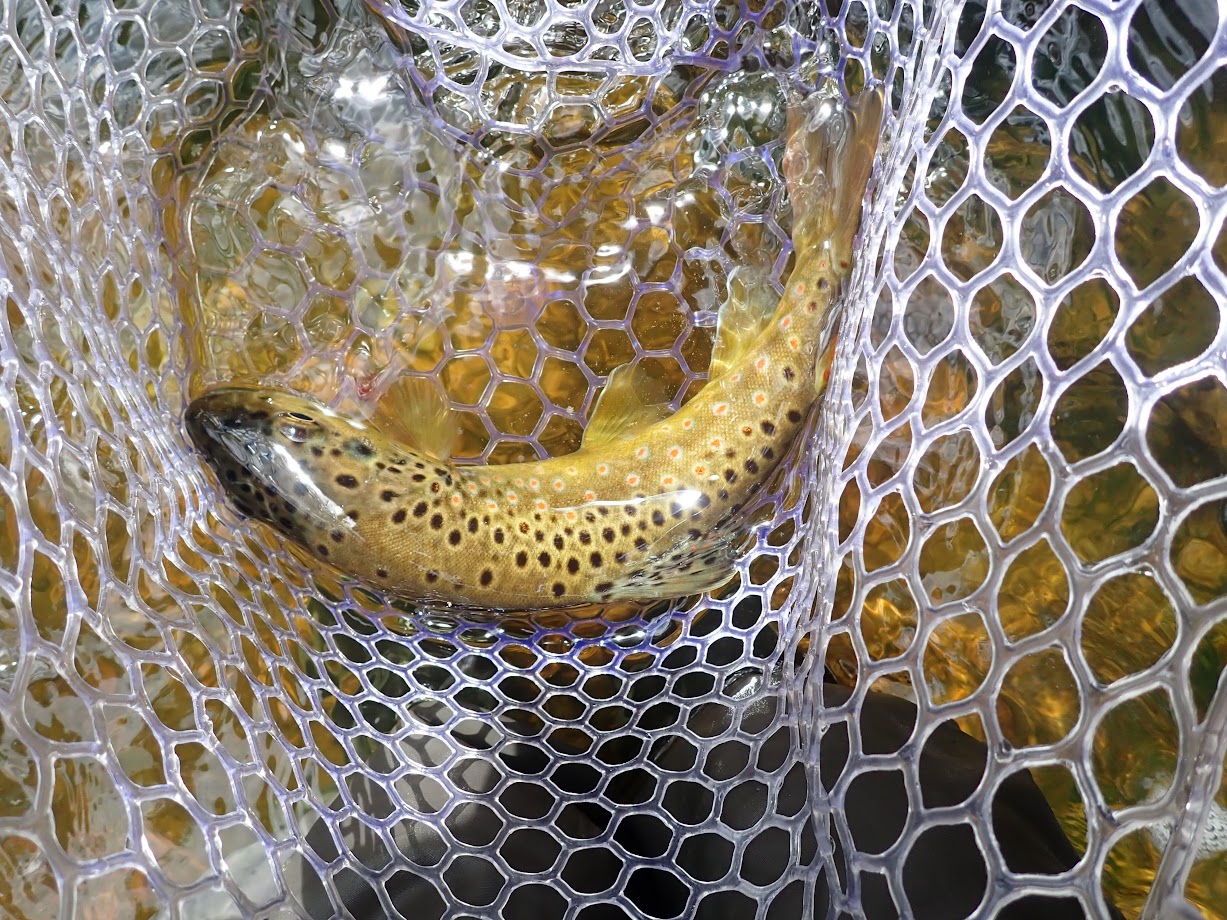 Look at Those Ink Spots

My first seven trout were mostly browns with a couple rainbows in the mix, and all inhaled the parachute green drake. Apparently my imitation was close to what the resident trout were looking for, because the fish were sucking it in confidently. Number seven was an eight inch rainbow, and hook removal required the use of my hemostats, and I severely damaged the fly during the process. I replaced the productive parachute fly with another, but it seemed larger, and the trout were much more tentative as exemplified by a significant increase in the number of refusals. I managed to add two brown trout to the fish count, but then I switched once again. 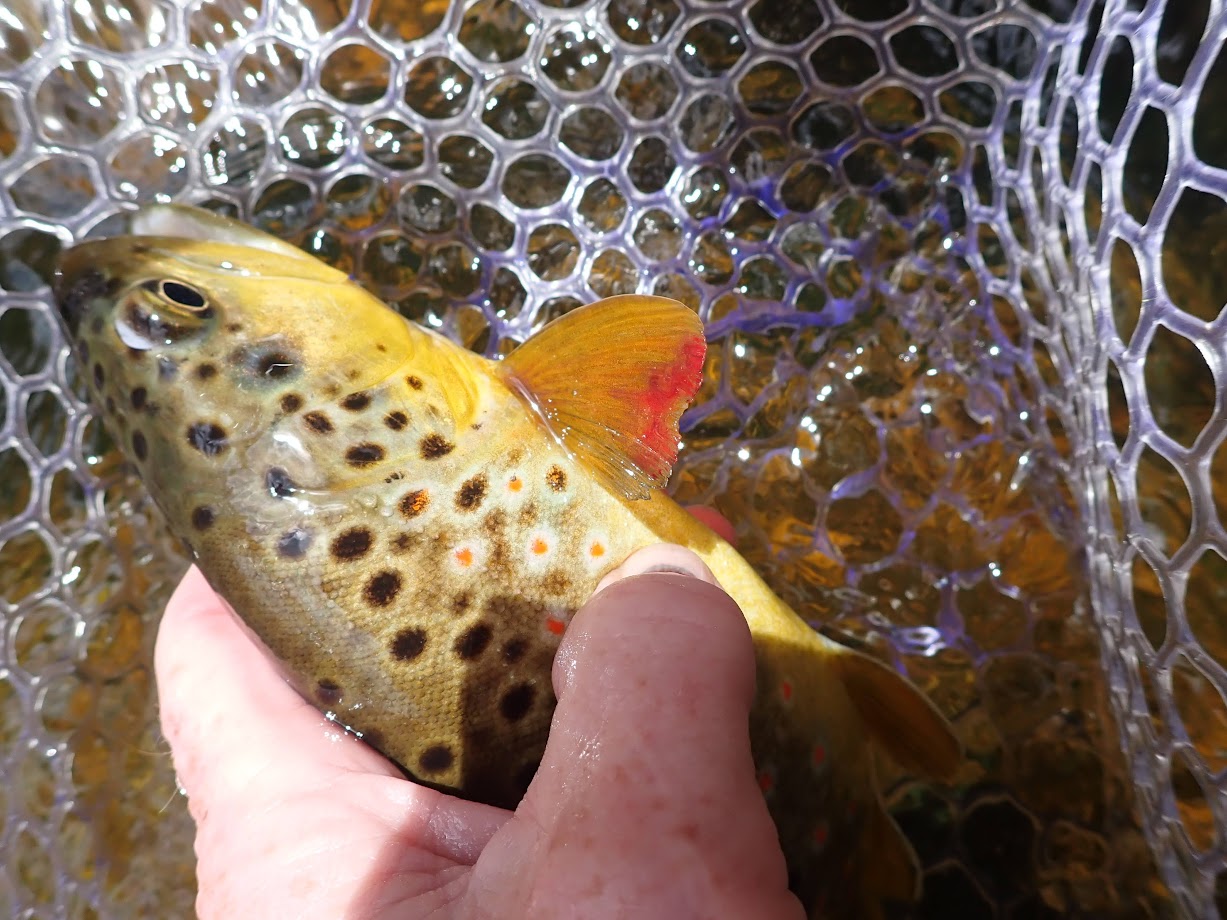 In this instance I returned the parachute green drake to my fly box and replaced it with a size 14 user friendly. The Grillos user friendly contains two layers of thin foam, and I was hoping for improved floatation. The fly remained on the surface in fine fashion, and by the time I grabbed a boulder for lunch, the fish count had jumped to fourteen. Unfortunately the last fish before lunch severed the hackle on the user friendly, and I made a mental note to swap it for a fresh and undamaged fly after lunch. 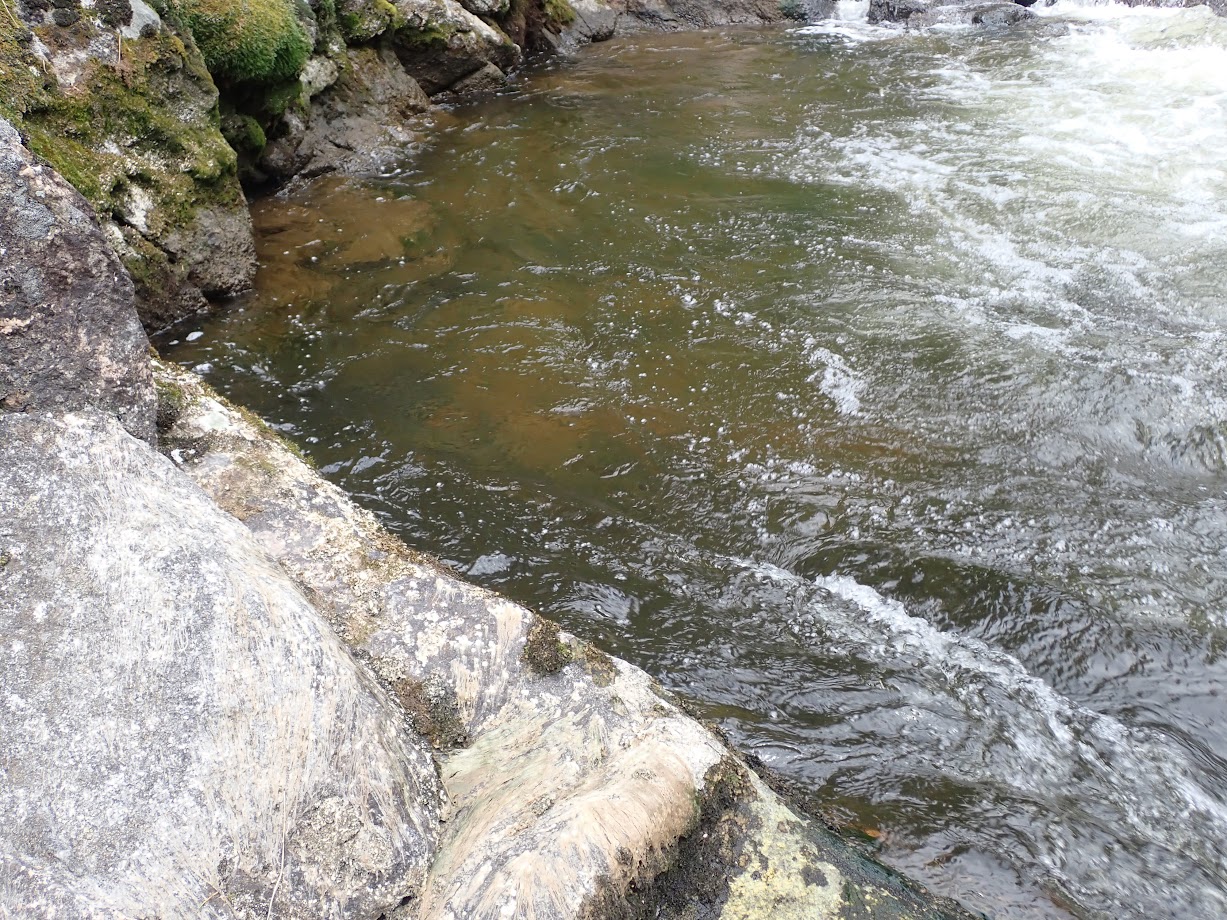 A Brown Took My Fly Next to the Rock

I kept my word, but for some reason I abandoned the user friendly and tested a Harrop hair wing green drake size 14. The hair wing paid immediate dividends on a nice bankside pocket, but then it faltered and did no justify the extra effort required to track it in the swirling currents. I was interested to see how the large bulky fan wing of a comparadun played with the resident trout, and I assumed the large wing would be easier to track. My hunch was correct, and one small brown trout launched toward the comparadun and met my net in a brief amount of time. The comparadun then became a high maintenance fly, as the waterlogged abdomen and thorax required constant drying and frequent application of floatant. 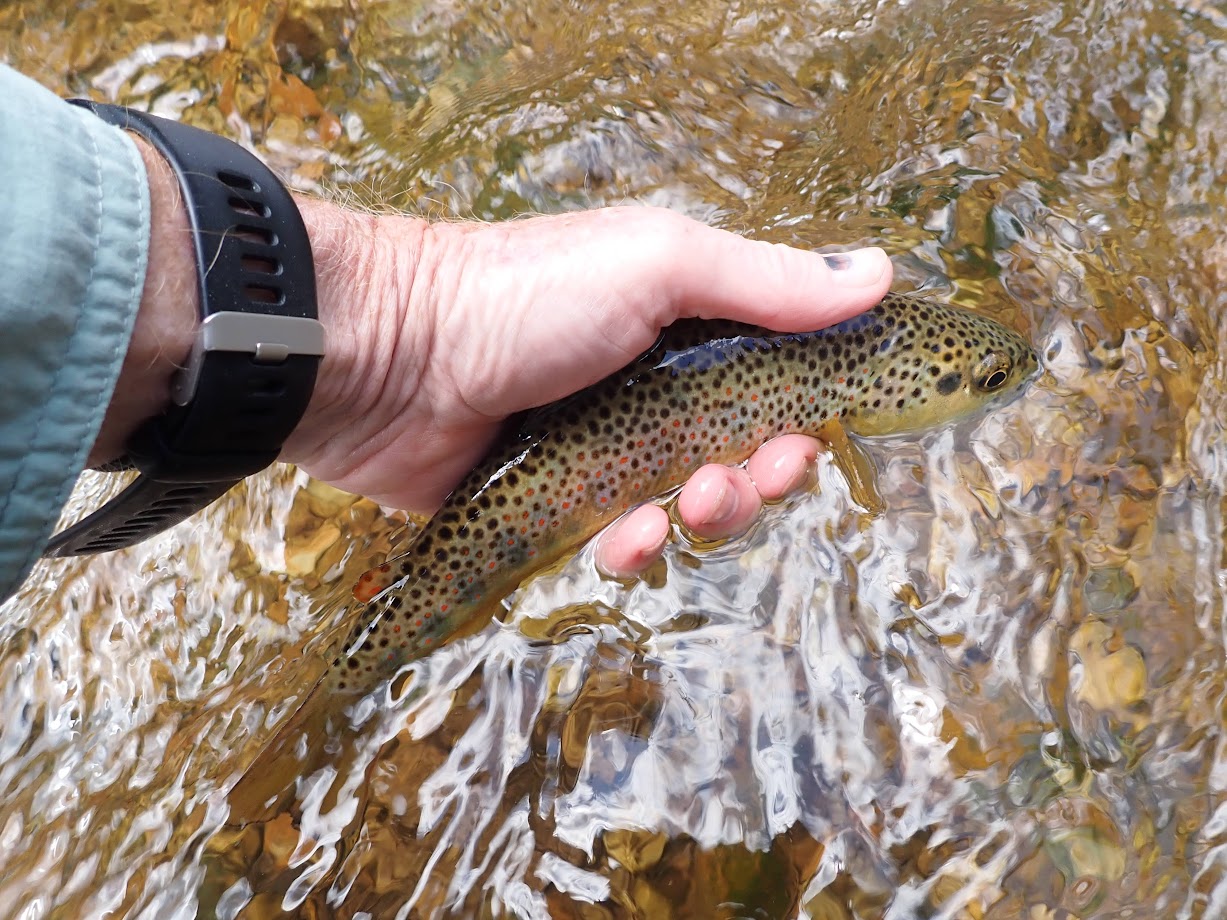 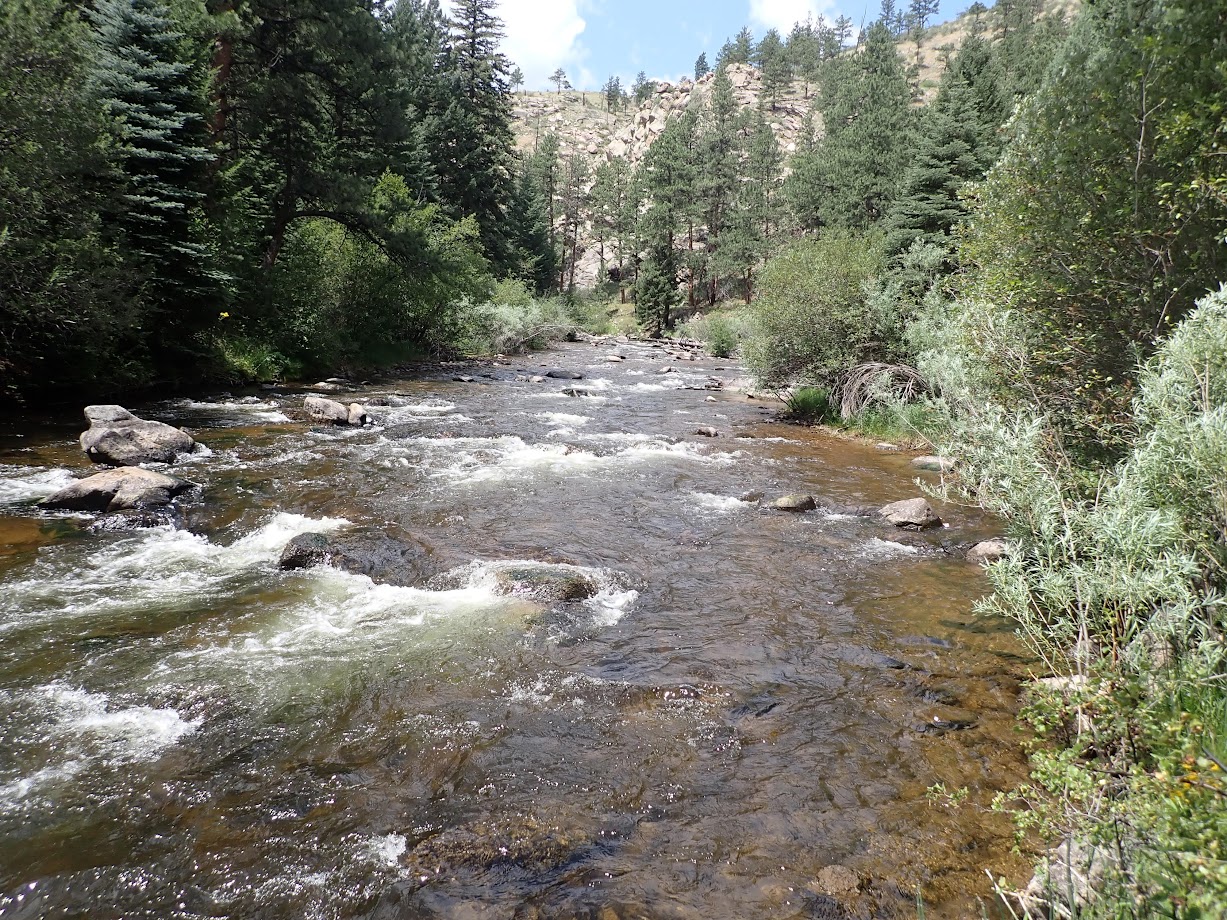 Once again I considered a change, and this time I reverted to the parachute style fly. During the winter I tied some parachute green drakes with moose mane tails and poly wings. Previously I used turkey flats for wings, but I shifted to the poly wing to create the illusion of more bulk similar to the naturals, as they fluttered and attempted to become airborne from the surface of the stream. The poly wing parachute drake was an overwhelming winner, and I stuck with it for the remainder of my time on the water, as I built the fish count to forty-eight. Yes, you read that correctly. I had a blast tossing the large single dry fly with my new Sage rod to all the likely fish holding locations, and in many cases the trout responded by attacking the size 14 fly. I spotted my first natural western green drake at 12:35PM, and their sporadic emergence continued until 3:00PM, when I reached my intended exit point. The catch rate slowed somewhat over the last hour, but how could the torrid pace continue? 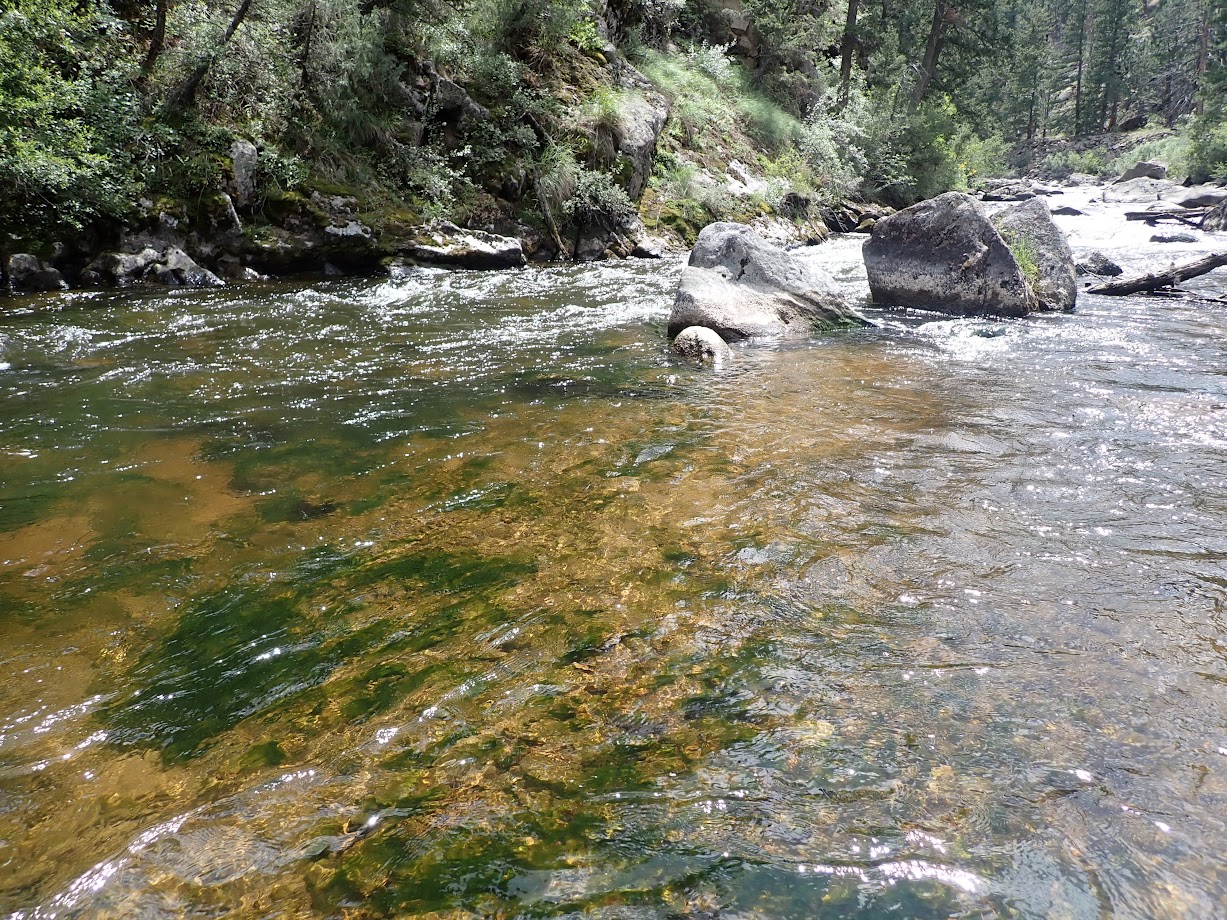 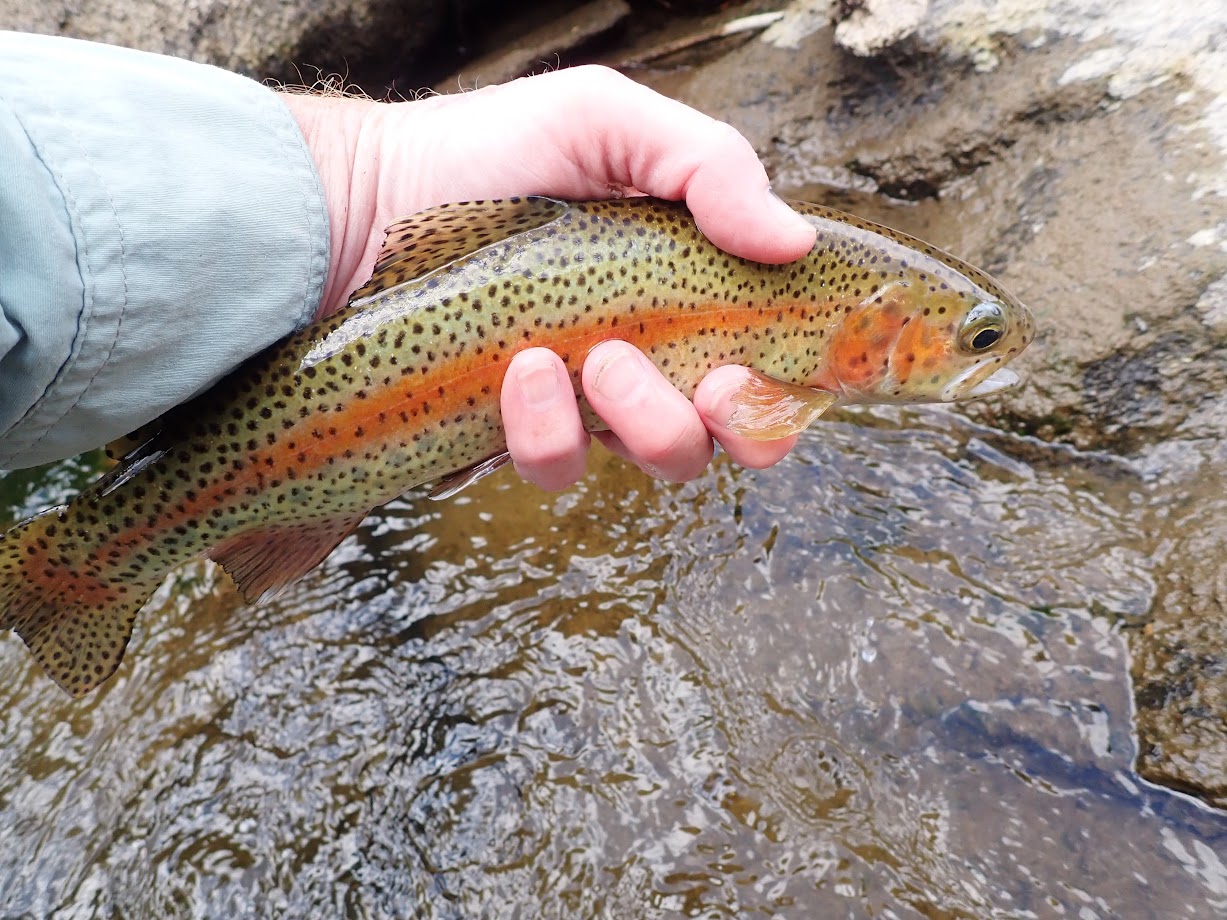 On my return hike I stopped at several of my favorite hotspots, and I picked up three more drake eaters to move the count to forty-eight. I worked diligently to attain a fifty fish day, but during the last hour the interest in drakes seemed to wane, and in my last stand, I experienced only refusals. I was weary and faced more hiking, so I abandoned the goal of fifty and marched back to the parking lot. 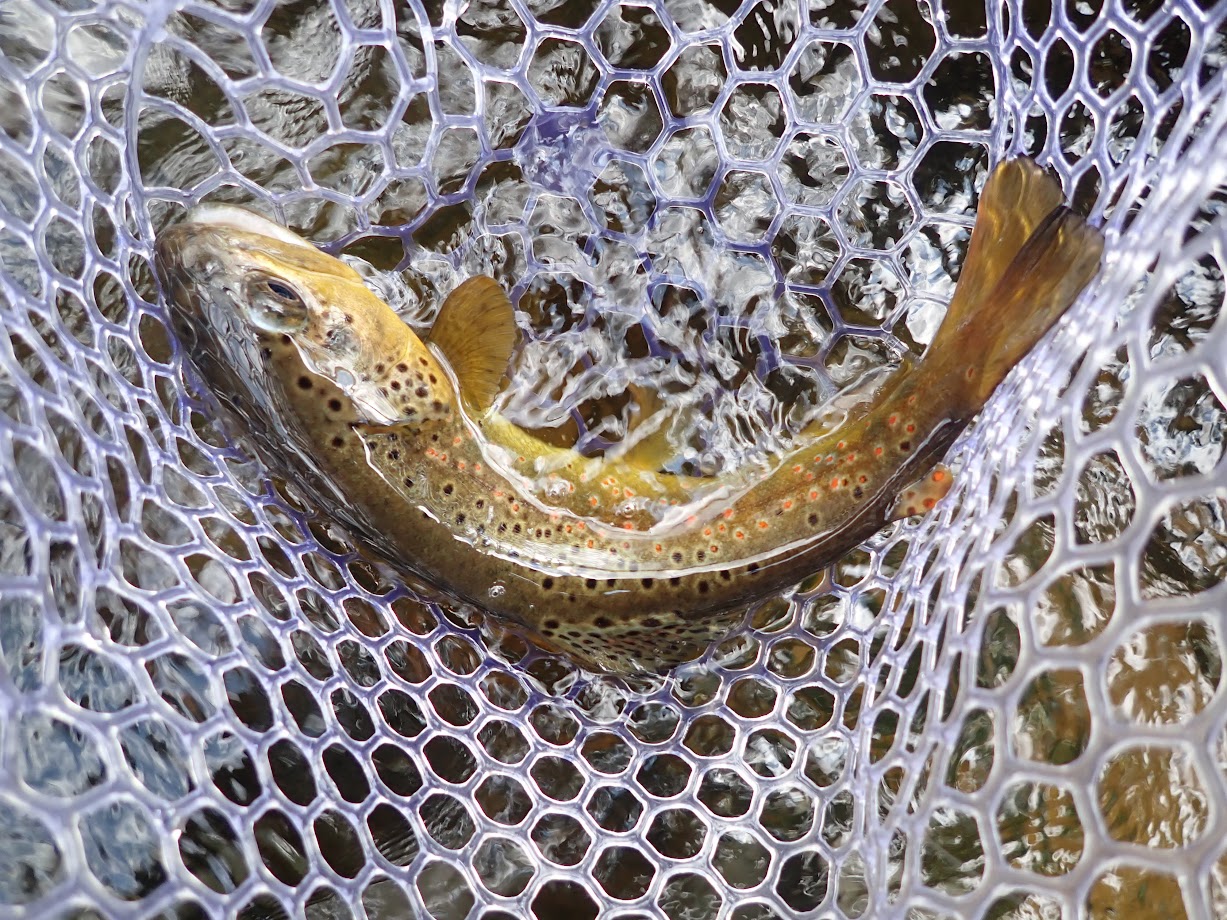 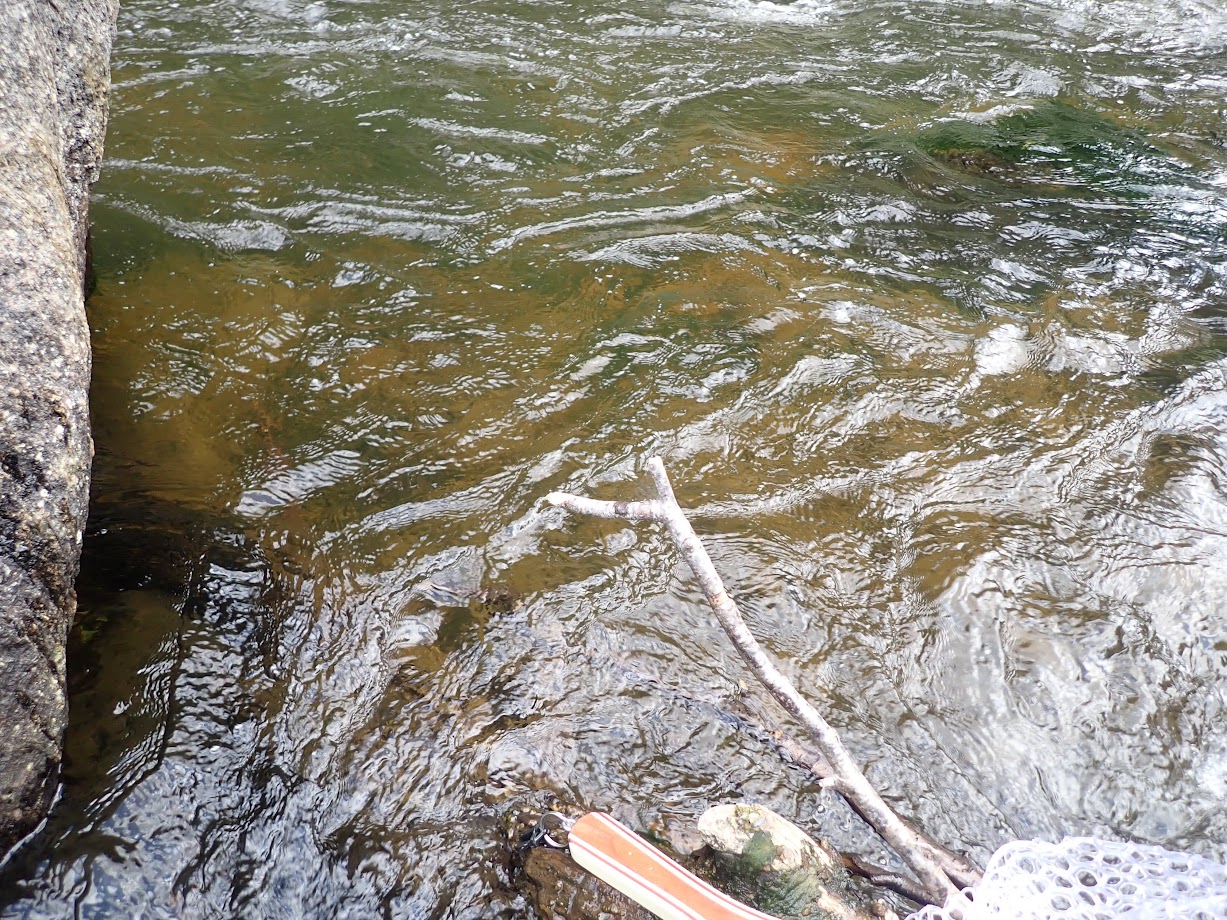 On July 29 I sensed that I was on the cusp of a spectacular day, and August 3 pretty much confirmed that my intuition was correct. Of course, the forty-eight trout were on the small side, but I estimate that at least ten stretched to the twelve to thirteen inch range. All the trout sported vivid and bright colors, and I thoroughly enjoyed my day. The weather was perfect, the flows were improved,  and I never encountered a competing angler. My new fly rod performed admirably, and I particularly liked the way it cast and the flex that allowed me to confidently control the larger fish. I will reserve further judgement, until I attempt to land a sixteen inch bruiser on the four weight outfit. I love the green drake hatch, and the fish do as well, as all my catches consumed a green drake imitation.