A bit of adversity makes fly fishing the intriguing challenge that keeps me returning to the lakes and streams of this wonderful earth. If fooling fish with a fly were as easy, as dunking a basketball in a kid’s five foot high basketball hoop, would that be fun? I reminded myself of this fact after an evening on South Boulder Creek on Wednesday.

My son, Dan, mentioned that he could meet me at the South Boulder Creek parking lot on one evening during the week for an early spring outing. I quickly checked the stream flow graph, and I was delighted to discover that Denver Water reduced the flows from the 125 CFS range to 69 CFS, and this falls within my ideal range for the small front range tailwater. Dan chose Wednesday evening for our fly fishing rendezvous, and that was perfect given a weather forecast of highs in the eighties in Denver. 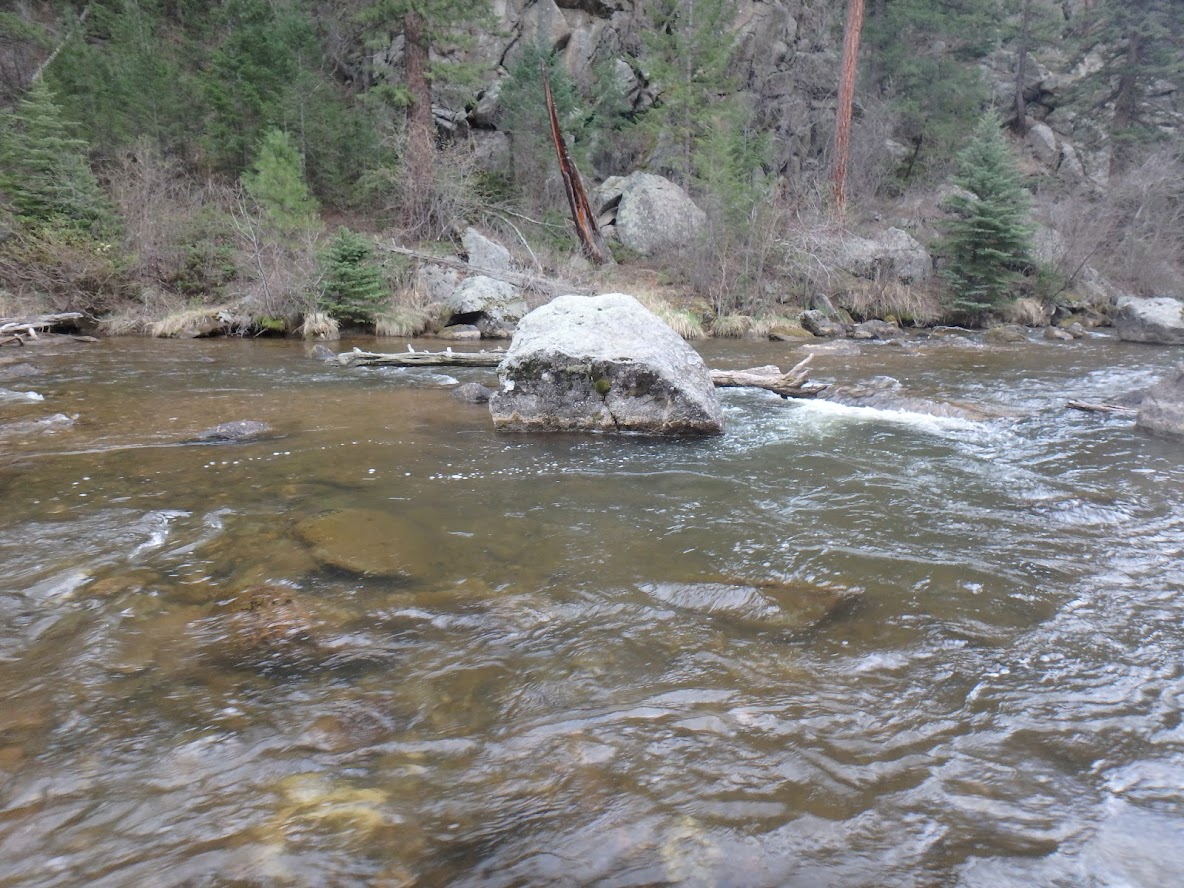 When I arrived at the kayak parking lot ten minutes before five o’clock, Dan was already there along with eight additional vehicles. Apparently many front range anglers had similar thoughts regarding fishing on Wednesday evening. I quickly assembled my Orvis Access four weight, while Dan did the same with his fly rod, and we stuffed the Snarf’s sandwiches that Dan purchased in our backpack and vest. Despite the forecast for balmy temperatures, some large dark clouds formed in the western sky, so I stuffed my light rain shell in my backpack. Dan opted to forego the extra layer, and he later grew to lament this decision. Three separate sets of brief showers kept the temperature down, and the last thirty minutes before were quit were downright chilly. 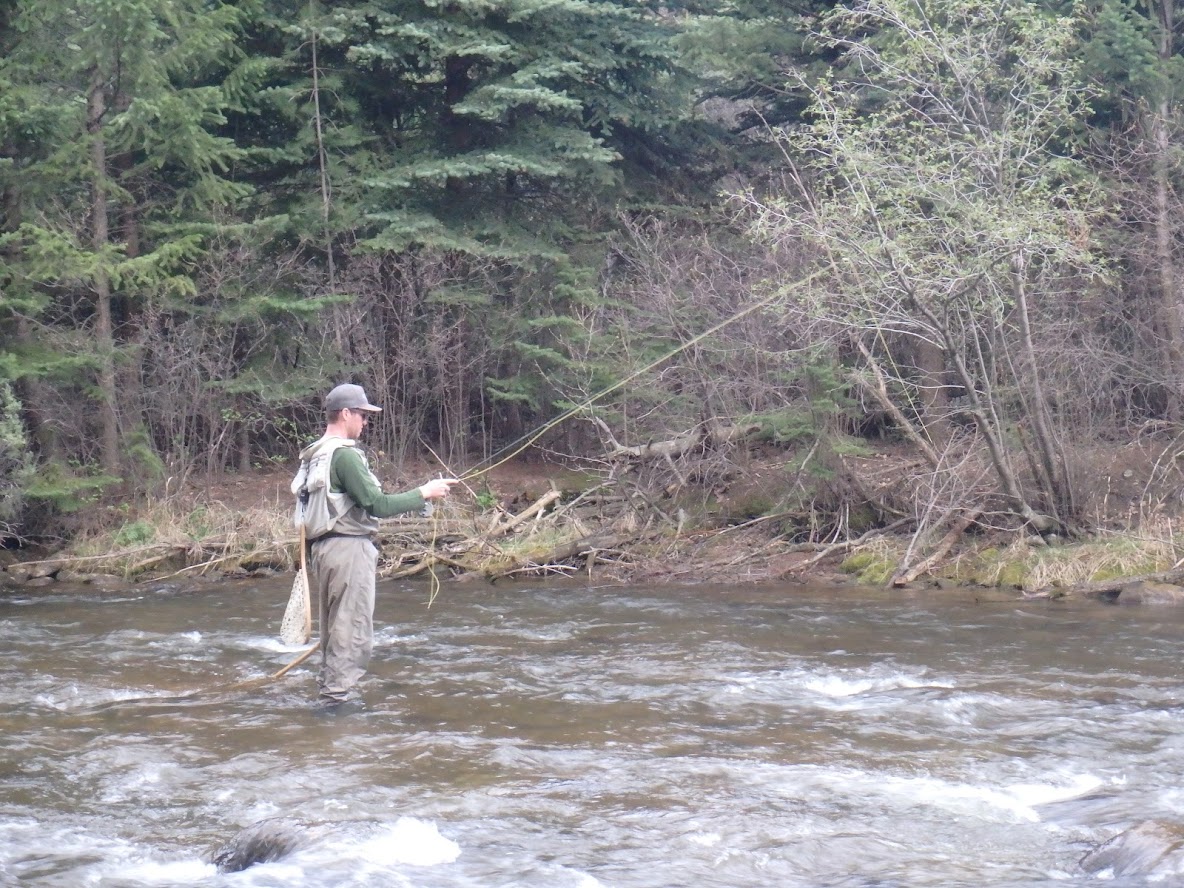 Flows were 69 CFS in the morning, when I reviewed the graph, but when we arrived next to the stream to begin our quest for trout, they seemed higher. My instincts on this matter were vindicated the next day, when I checked the DWR website and discovered that the flows were elevated to 89 CFS sometime during May 15, probably before our fishing trip.

I suggested we begin with single dry flies, hoping we could avoid the more risky tangle inducing dry/dropper approach. Dan began with a caddis, and I started with a gray size 14 stimulator. I suffered a few refusals, and then I approached a small pocket tucked against a midstream exposed boulder. A trout rose and rejected my dry fly three times, but on the seventh cast it slurped the high floating imitation. Getting a strike after three refusals is highly unusual. In any event I was thrilled to learn that my only trout of the evening was a very brightly colored rainbow trout. 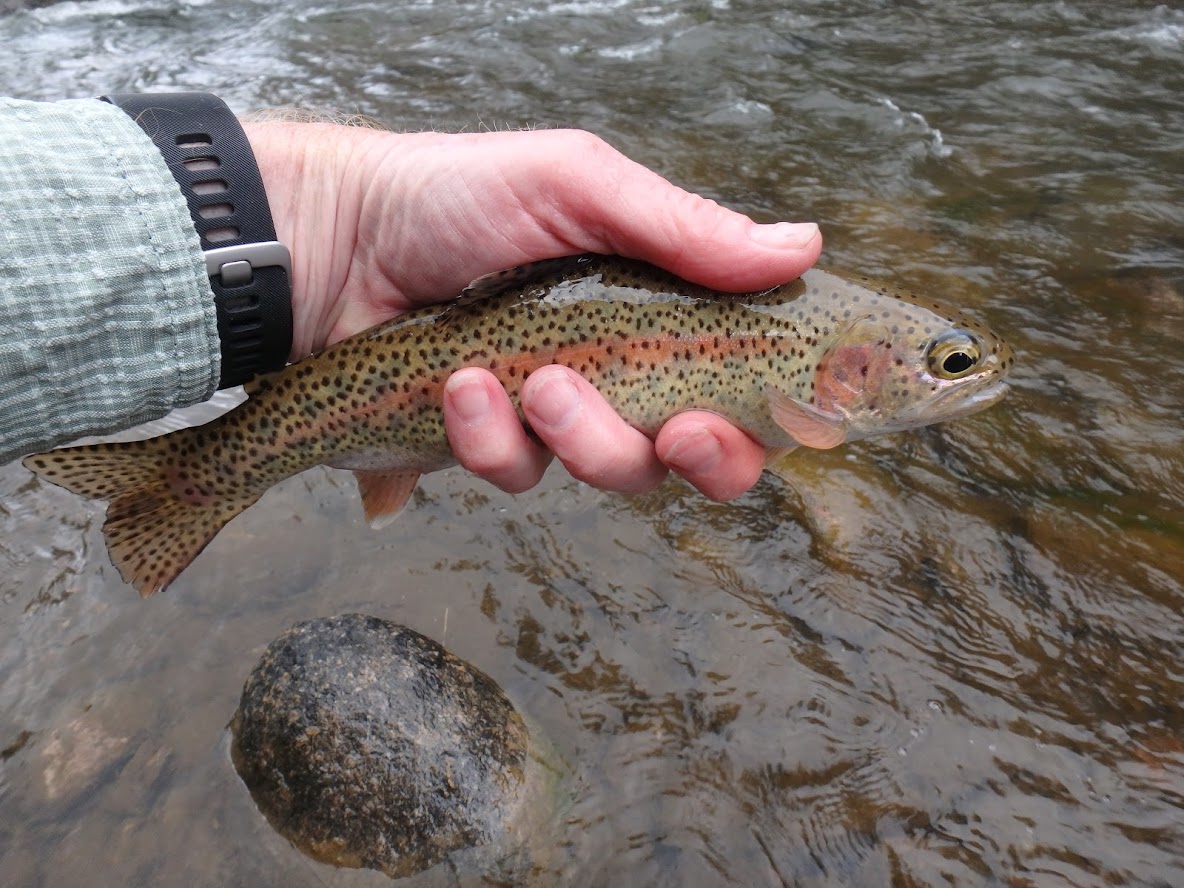 After releasing my catch I was unable to create additional interest in the dry fly, so I switched to a dry/dropper that included a yellow fat Albert, ultra zug bug and emerald caddis pupa. This arrangement failed to trigger action, but Dan followed my lead with a change to a Chernobyl ant and beadhead hares ear. During the last thirty minutes Dan switched to a yellow fat Albert trailing a bright green go2 sparkle pupa, and this move generated two momentary hookups. We speculated that perhaps we should have tried the bright green caddis pupa earlier. 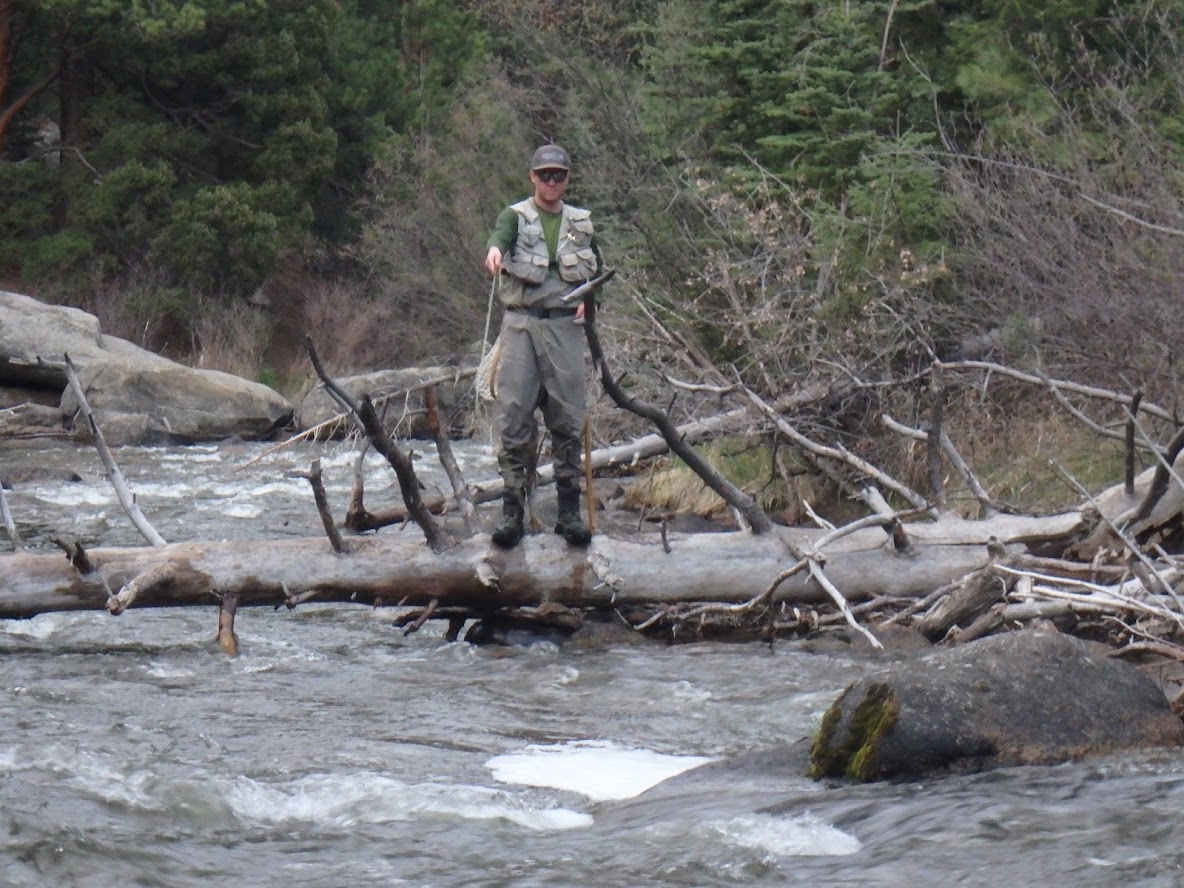 Avoiding a Snag in This Spot Was a Victory

We covered .2 miles in two hours, and Dan managed a couple temporary hook ups, while I landed one ten inch rainbow trout, and that was pretty much the extent of our success on South Boulder Creek. The cloud cover created difficult lighting conditions, and the structure of the section I chose to fish was high gradient; thus, offering few prime runs and riffles of moderate depth. I am now convinced that the elevated flows played a significant role in our slow fishing experience, as typically fish require a period of time to adjust to a nearly 30% change. Our results indicate that we were unable to overcome three negative factors on May 16, 2019.