Although I fished all day on Monday and made plans for another full day on Wednesday, I could not resist a short local trip in light of the gorgeous spring weather. I checked the flows on the front range streams, and South Boulder Creek stood out as a nearby option with flows at 43 CFS. This level represented an increase from 35 CFS, but I did not view that increment to be a negative. In fact the low early season flows made fishing somewhat challenging during my last visit to the small tailwater below Gross Reservoir.

The air temperature was sixty degrees, when I pulled into the kayak parking lot, and by the time I ascended the steep trail at 3:30PM, the mercury increased to the upper sixties. Since it was noon when I arrived, I chomped my lunch in the car before I prepared to fish. Two vehicles arrived before me, and another joined the parking lot while I assembled my Orvis Access four weight.  I slid into my waders and then descended the steep trail to the creek and then hiked for twenty-five minutes, until I was a half mile below the pedestrian bridge that is part of the Walker Loop. The stream in this section tumbles through high canyon walls comprised of large jumbles of boulders. Normally I hike past this area, but I decided to give it a try on Tuesday, since my late start was not suited for a long hike.

After I scrambled down a boulder field, I tied a size 14 gray stimulator to my line, and I began to prospect upstream through some inviting deep pools. After fifteen minutes of unproductive casting, I experienced a refusal at the lip of a gorgeous deep pool. I was pleased to note a response to my single dry fly, but the snub was not what I hoped for. I decided to downsize, and I added a size 16 gray deer hair caddis on a dropper twelve inches behind the stimulator. The smaller trailing fly also generated a refusal, and I eventually tipped my hat to the discerning trout and moved on.

A long lull commenced where I failed to generate even a look or refusal, so I eventually converted to a dry/dropper approach. I knotted a size 10 Chernobyl ant to my 5X tippet, and then I added a beadhead hares ear. Another lengthy period of inaction ensued, until I finally hooked and landed a small rainbow trout that barely extended beyond my six inch minimum requirement. I was not very proud of my catch, but at least it preventing a skunking. 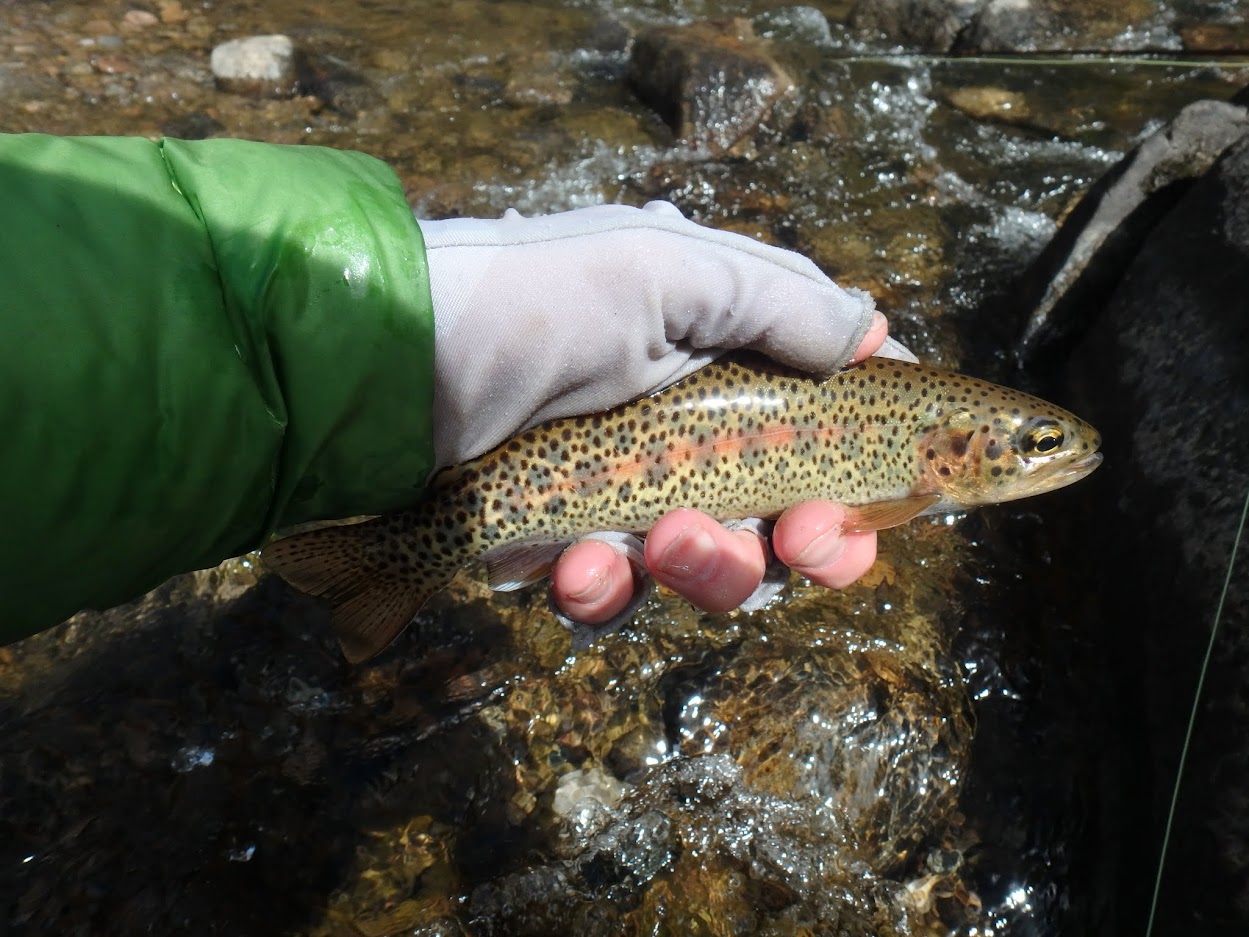 As the lack of action unfolded; I spotted some small midges, an occasional small mayfly, and some diminutive stoneflies. Given the presence of small insects I decided to react by adding a size 20 salad spinner below the beadhead hares ear. This change proved to be the salvation of my day on Tuesday, as the salad spinner accounted for three additional trout, before I retired at 3 o’clock. The second was a very pretty ten inch rainbow with perfect black speckles. The third was another tiny rainbow with an array of vivid colors, and the last netted fish was the prize of the day. 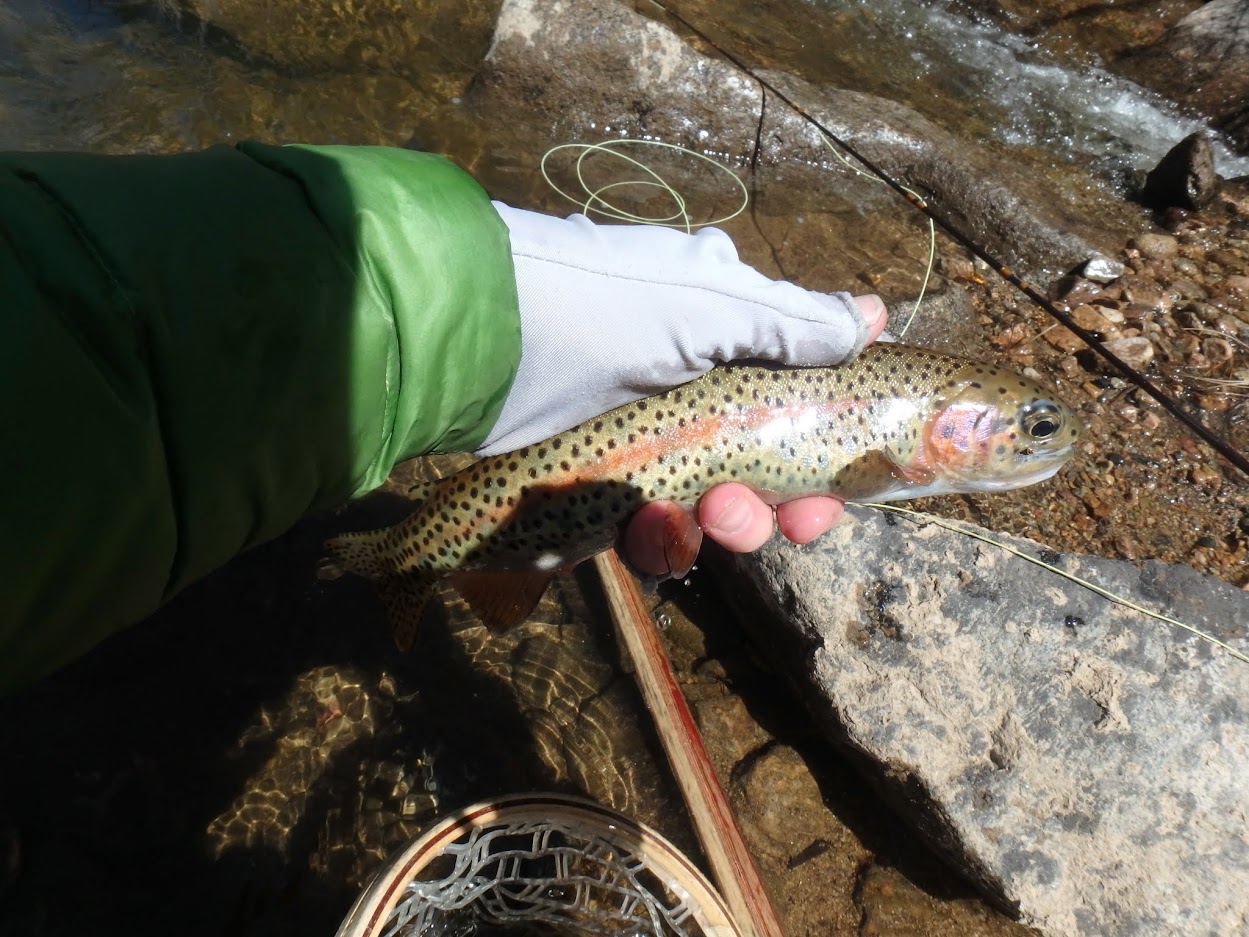 I was twenty yards below the pedestrian bridge, and I tossed my flies to the top of a current seam adjoining a nice long run. Just as the Chernobyl approached a log at the downstream border of the pool, I raised the rod tip to avoid entanglement, and this action prompted a feisty rainbow to attack the salad spinner. I slid the thirteen inch jewel into my net and marveled at the wide scarlet stripe that adorned both sides of the fish. This fish vindicated my three hour visit to South Boulder creek, and I was elated by the late surprise.

I continued upstream beyond the bridge a bit, but I was tired and weary of climbing over rocks with minimal reward for my efforts. I reeled up my flies and hooked them to the bottom guide and made the long trek back to the parking lot. Four fish in three hours was a bit sub par, but I only invested a one hour drive, and I enjoyed a beautiful spring afternoon, so it was a positive experience. The brightly colored rainbow was icing on the cake.