After a fair outing on Monday I was itching for another day of spring fishing. I had my eye on South Boulder Creek, and Thursday was the designated day for my first trip there in 2019. Flows were 99 CFS, and I generally consider 80 CFS to be ideal, so the current volume out of Gross Dam was well within the desirable range. With another longer trip on the calendar for Friday, I decided to limit my fishing to sections closer than normal to the parking lot.

I departed from my home in Denver by 8:45 and arrived at the kayak parking lot by 10AM. By the time I collected my gear and hiked down the path for twenty minutes, it was approaching 11AM; and after rigging my line with a yellow fat Albert, beadhead hares ear nymph and RS2; it  was eleven o’clock. The temperature was in the mid-forties when I began my hike, so I wore a heavy fleece and ear flaps with an Adidas pullover tied around my waste under my waders. The sky remained overcast for the entire time in the canyon, and after lunch I slid the Adidas layer over my fleece for added warmth. By the end of the day my feet felt like stumps with very little feeling in my toes. 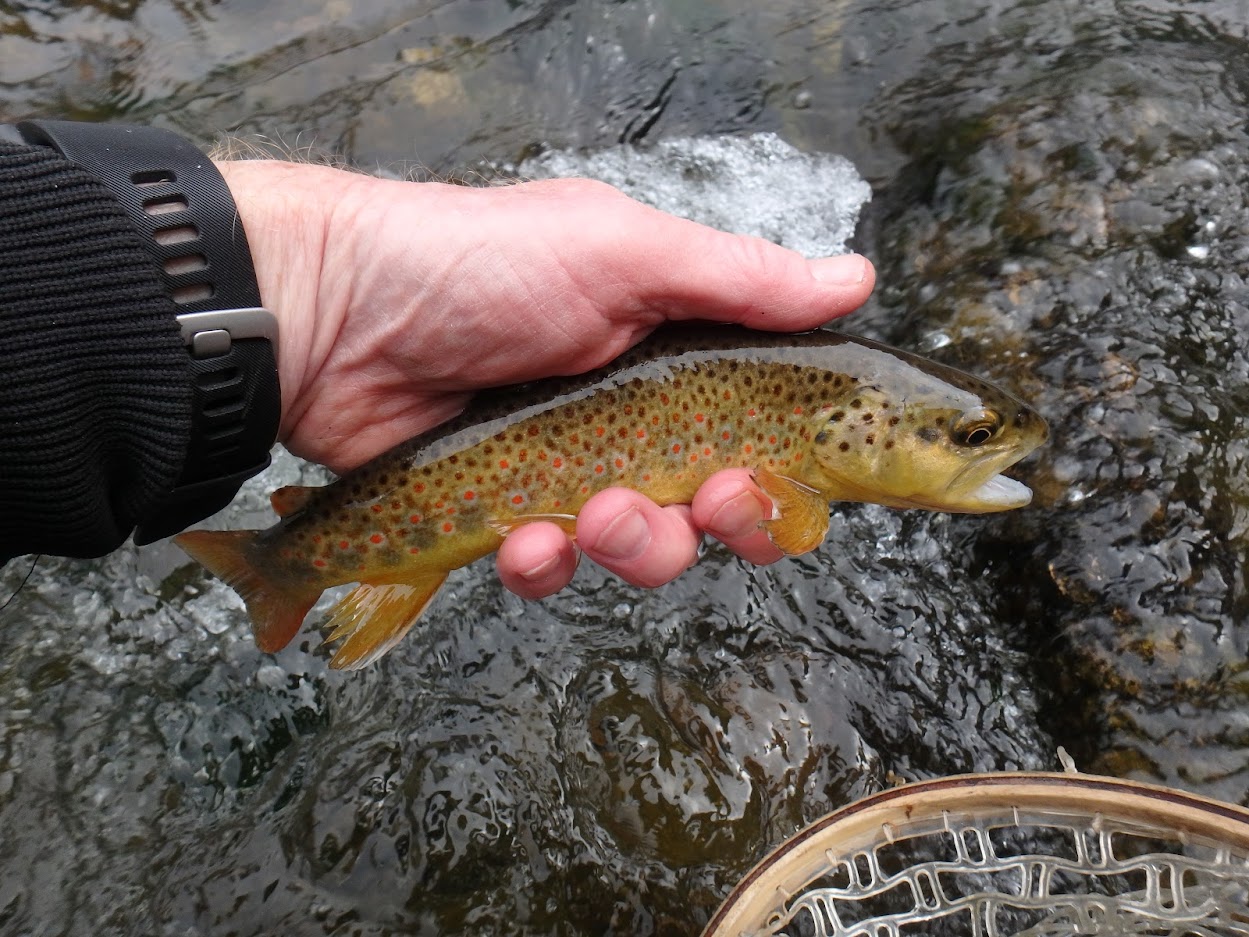 In the first hour before lunch I landed two trout; a small brown and rainbow. The brown trout latched on to an emerald caddis pupa, as it swept along the far bank in a narrow band of slower moving water. The next section of the stream contained a nice gentle pool, and I spotted several rising fish. This observation prompted me to remove the dry/dropper configuration, and I shifted to a single CDC blue winged olive. The small surface morsel fooled a colorful rainbow, and then it became an object of scorn, as the feeding stream residents repeatedly turned away at the last instant. 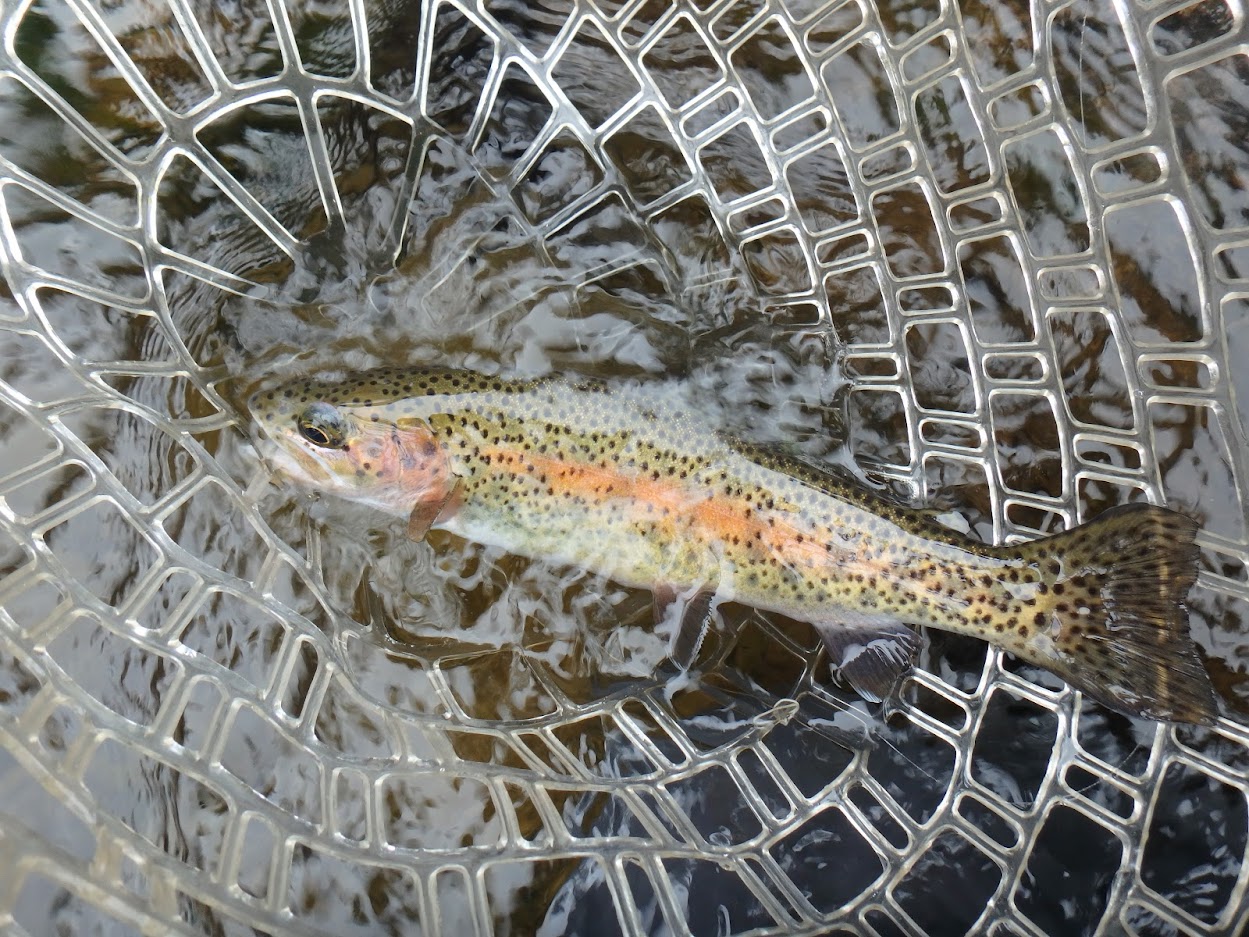 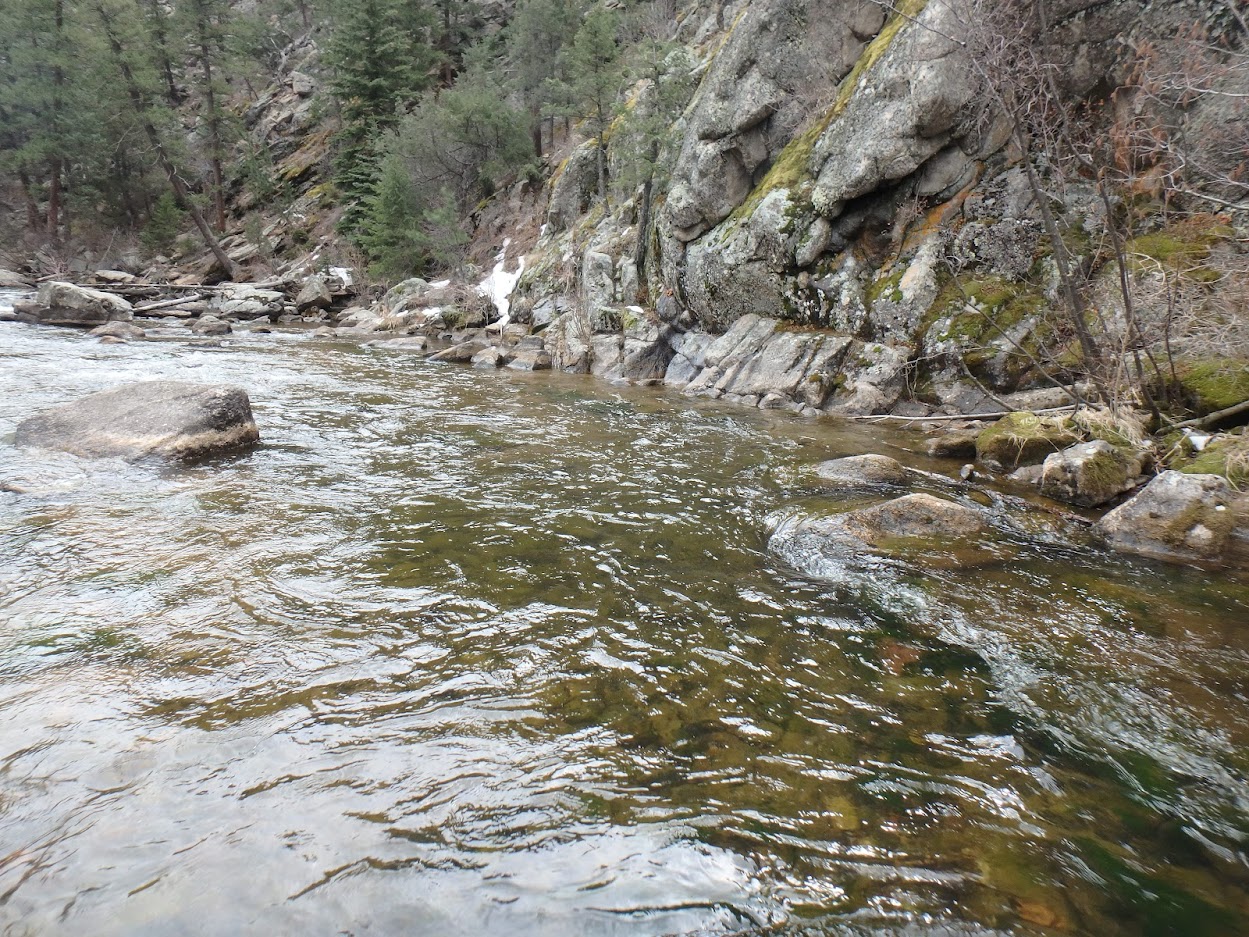 With the fish count paused at two and a small amount of frustration building from the rejections, I found a nice rock and consumed my small lunch snack. After the fifteen minute pause, I added my Adidas layer and approached another nice slow moving pool along the right bank. I decided to temporarily rest the CDC BWO, and in its place I knotted a size 22 Klinkhammer BWO emerger. At first this fly was totally ignored, but then I flicked a backhand cast under some overhanging branches, and an eager brown trout appeared out of nowhere and slurped the emerger.

I was encouraged by this turn of events and stuck with the Klinkhammer through a couple more small pools, but once again the fish were either ignoring or refusing my offering. The next section of water contained faster runs and pockets, so I reverted to the dry/dropper, but the ploy proved fruitless once again. The cycle of shifting from single dry to dry/dropper repeated several times, but I never found a rhythm with the dry/dropper approach. I experimented with a Go2 caddis pupa and sparkle RS2 as components of the dry/dropper rig in addition to the flies previously cited, but only the emerald caddis pupa produced positive results. 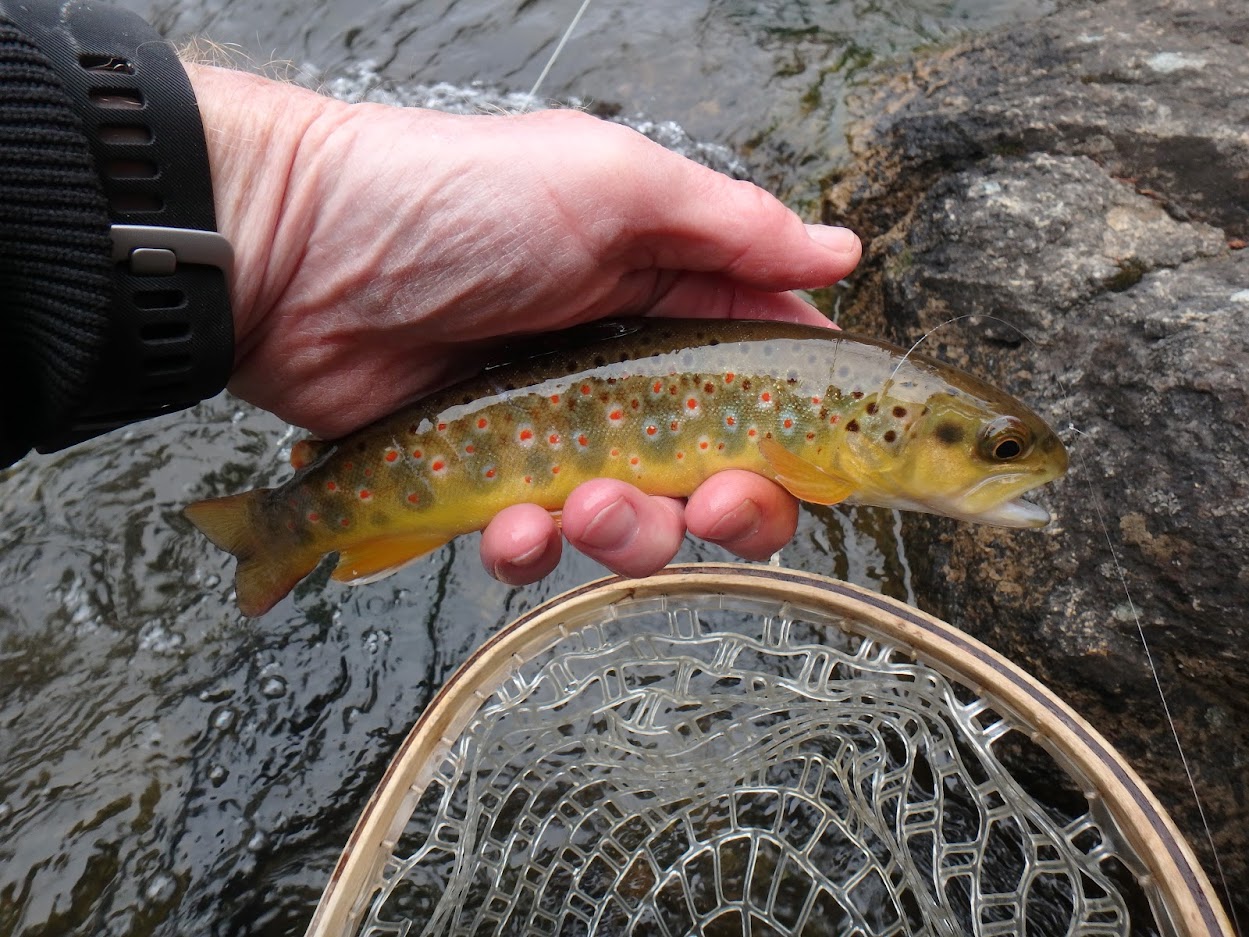 The blue winged olive hatch between 11:30 and 12:30, although sparse, represented the most intense insect activity of the day. Several brief flurries reoccurred in the early afternoon, but other than a few random rises, the hatch did not seem to attract much attention from the fish. In addition to the CDC blue winged olive and Klinkhammer emerger, I drifted a RS2, sparkle wing RS2 and soft hackle emerger as a component of the dry/dropper system, but the subsurface offerings never connected with the local fish.

During one brief period after I removed the dry/dropper flies, I tied a size 14 gray stimulator to my line, and then dropped a sparkle wing RS2 off the bend. The stimulator generated several refusals, and the RS2 was ignored. After this failed tactic, I revisited the dry/dropper once again with no success. By two o’clock I concluded that Thursday was not a day for nymph fishing. The current seams along fast runs and the pockets behind midstream boulders seemed devoid of fish, or the fish were simply not interested in eating. All my positive action seemed to result from slow moving pools along the bank. 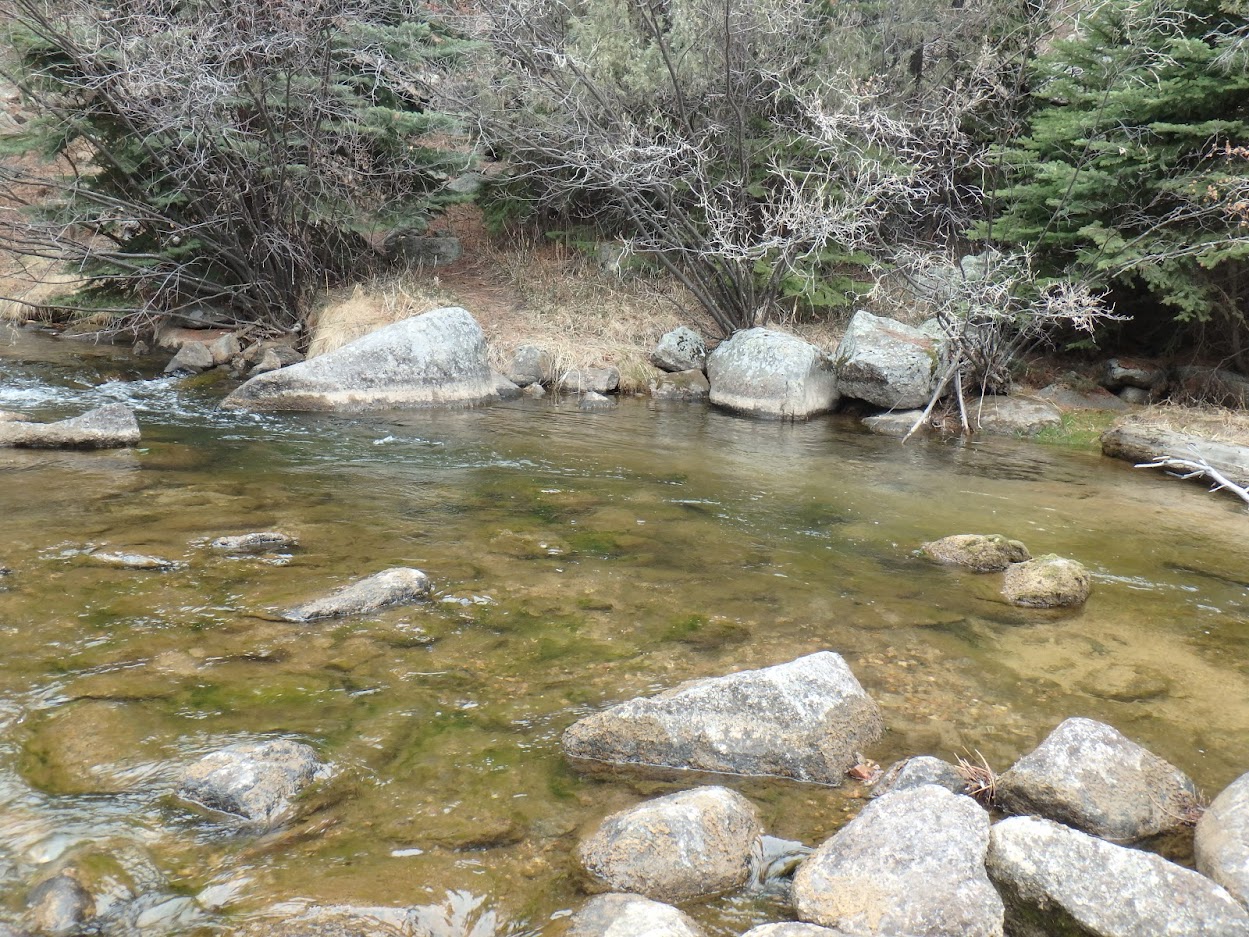 The Brown Emerged from This Area

I decided to use this trend to my advantage, and I attached a size 16 olive-brown deer hair caddis to my line. I focused my casting to the slow water with some depth along the bank, and this approach netted me two additional brown trout. These results were not great, but at least they gave me some positive feedback for my efforts.

By three o’clock I was chilled, and my feet were numb, so I reeled up the fly, attached it to the rod guide, and climbed the bank to the path. A twenty minute hike deposited me back at the parking lot. Much to my amazement it was sunny and sixty degrees in the parking area, and I could not figure out why I was so cold in the canyon.

Thursday was a disappointing and frustrating day on South Boulder Creek. The small tailwater is usually one of my favorite destinations within a close drive from home, but that was not the case on April 4. I never found a consistent rhythm, and this resulted in considerable unproductive time spent changing flies. I managed a couple trout during the blue winged olive hatch, but my flies were an imperfect representation of the food source favored by the fish, so this added to the frustration. The caddis dry fly in the last hour produced a couple takers, but I covered a significant amount of stream real estate during this phase. Hopefully I will solve the riddle during my next visit to South Boulder Creek.