Our destination on Sunday was the Arizona-Sonora Desert Museum, and this proved to be the highlight of our trip. The desert museum is located on the west side of Tucson on North Kinney Road just south of the entrance to Saguaro National Park Tuscon Mountain District. The facility is called a museum, but this is really a misnomer. 90% of the exhibits are outdoors, and I would consider it a hybrid zoo and botanical garden.

Entry requires a fee, but Jane and I felt it was well worth the expenditure. The grounds are expertly landscaped and well maintained. The managers were careful to preserve the desert landscape, while at the same time compressing nearly every imaginable organism that lives in the desert into the compact area. Volunteer hosts are scattered about the area, and they provide in depth information and answer visitor questions. 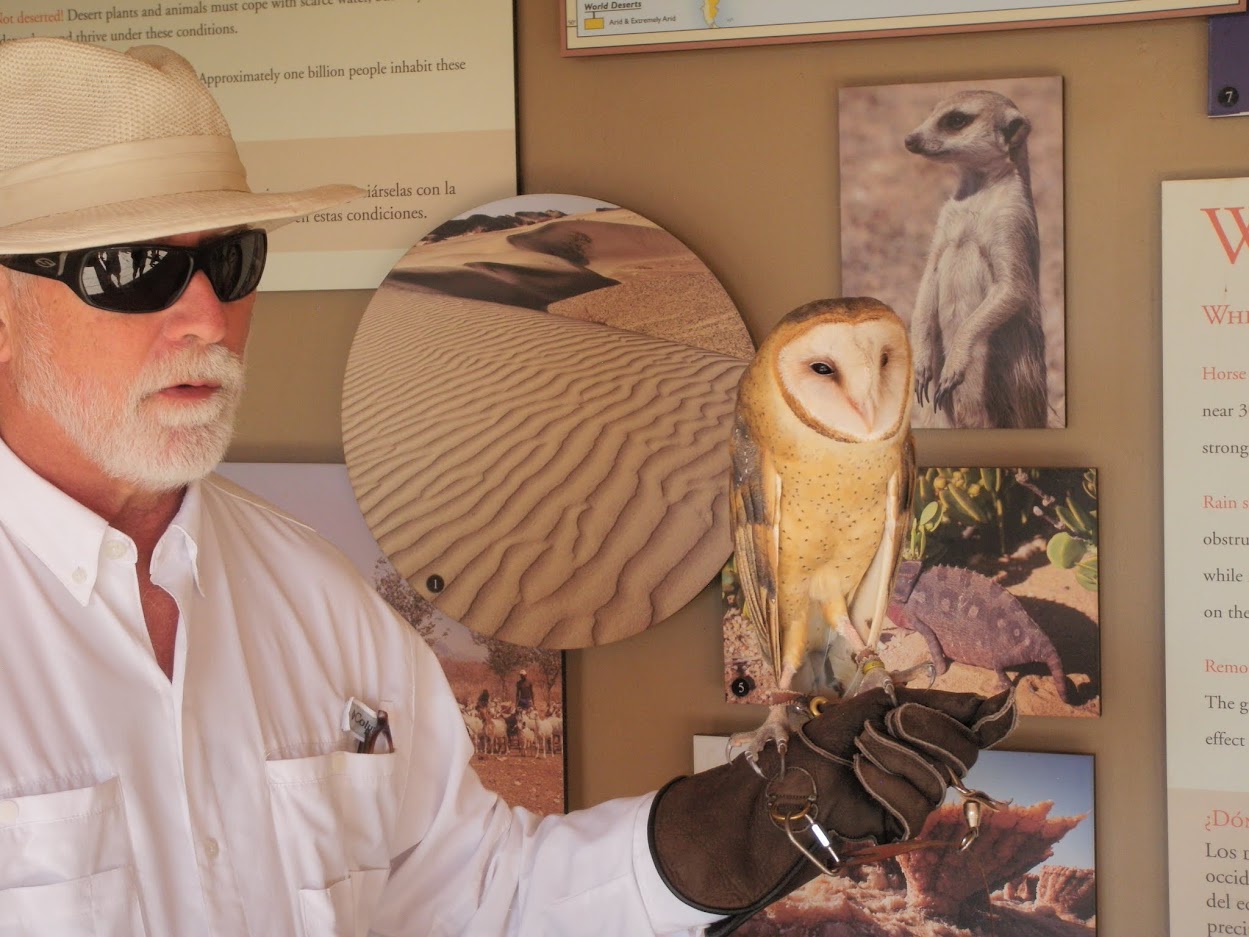 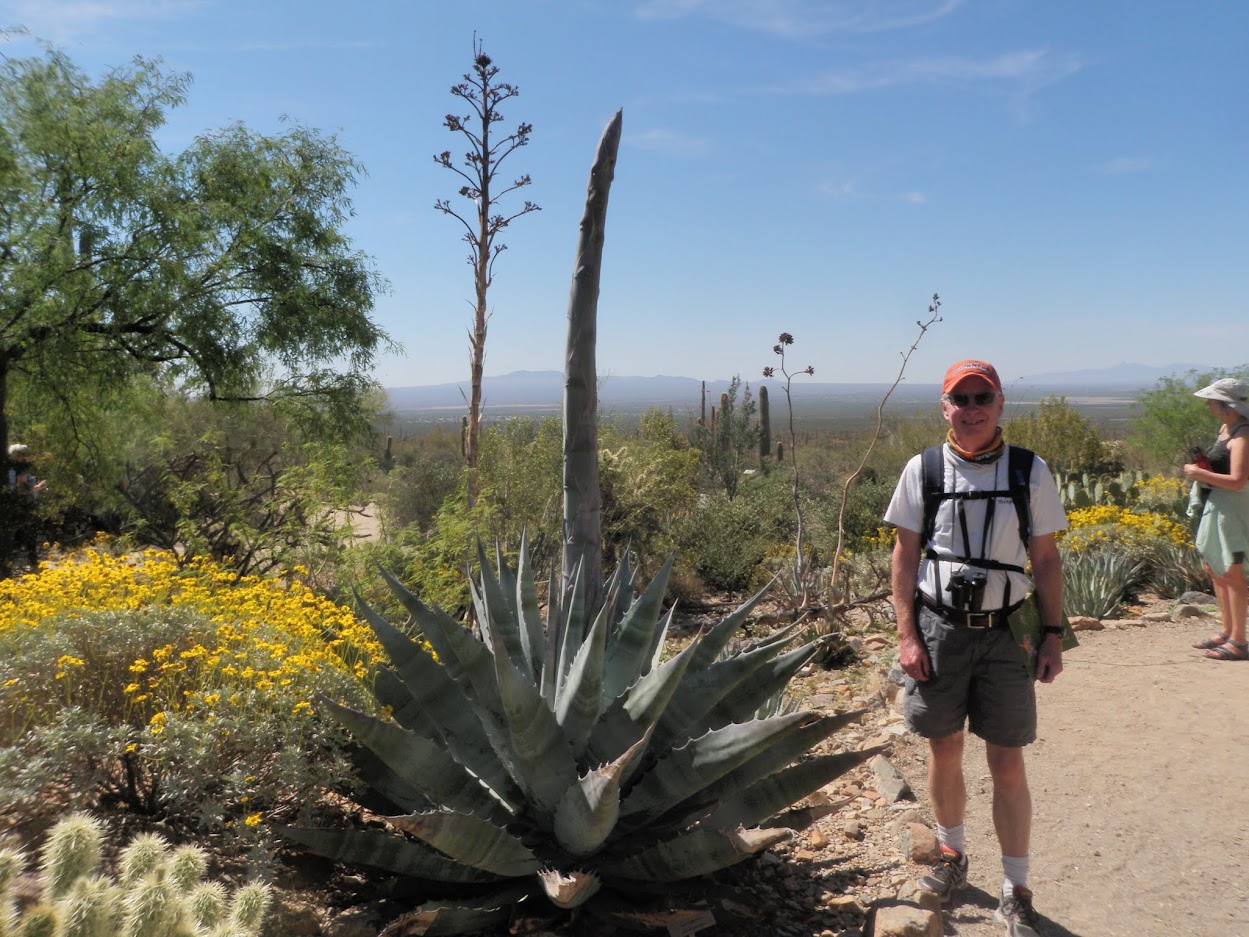 One of Many Agave Varieties

A number of special programs are scheduled throughout the day, and we particularly enjoyed the birds of prey presentation in the morning and the reptile demonstration after noon. Our favorite botanical areas were the cactus and agave gardens. The creators did a fantastic job of preserving the natural look while introducing many additional varieties of each species. 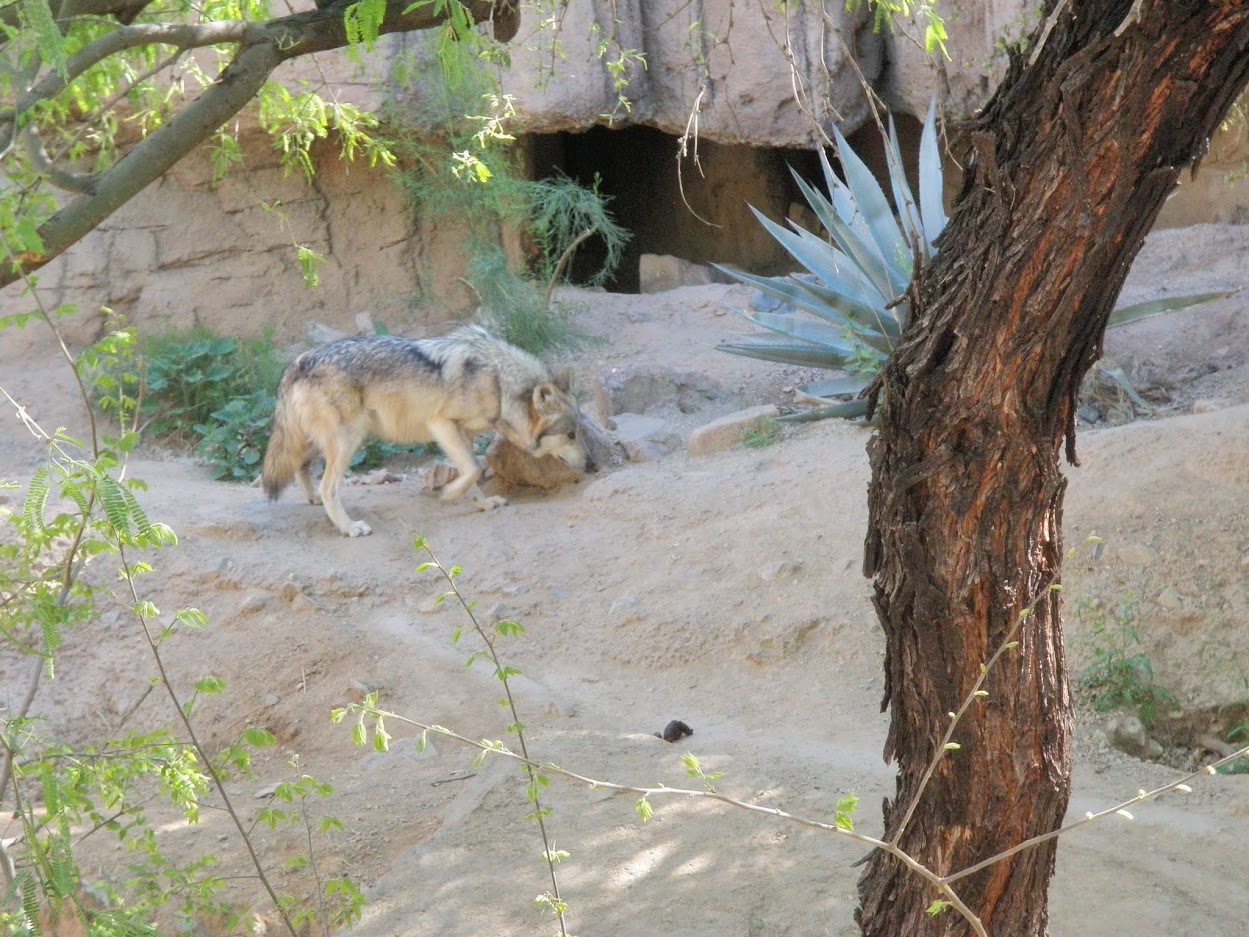 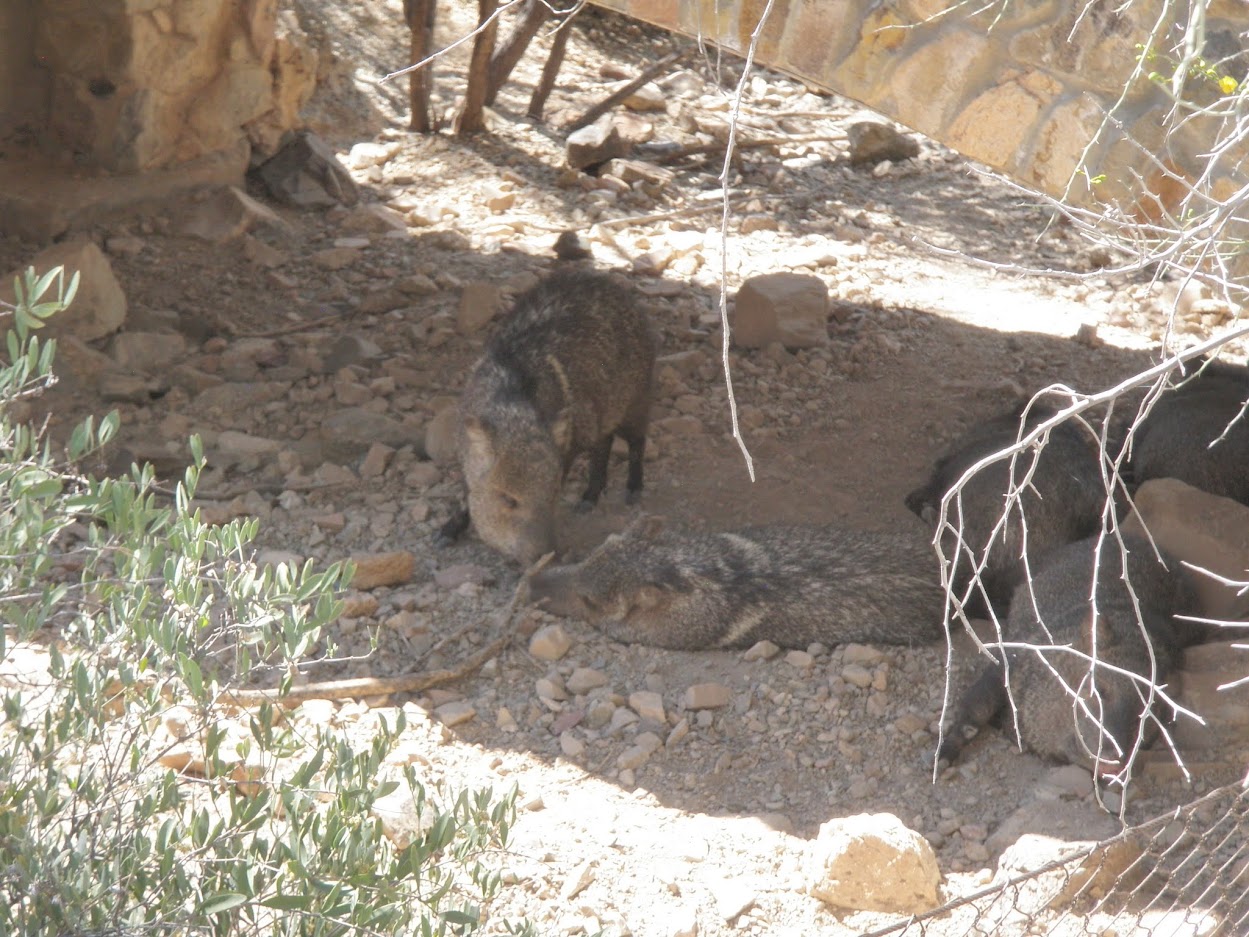 Native birds, mammals, insects and reptiles are on display throughout the area. Unlike most zoos I have been too, it seemed like the animal areas were nicely buffered by vegetation and other displays. This created the feeling that each had its own separate natural zone and space. We were excited to finally see javelinas, even though they were confined to a captive area. Other unique sightings were the Mexican black bear and the wolf or lobo. A hummingbird aviary enabled us to observe and photograph several species. For some reason I am particularly intrigued by these tiny birds with non-stop wings. 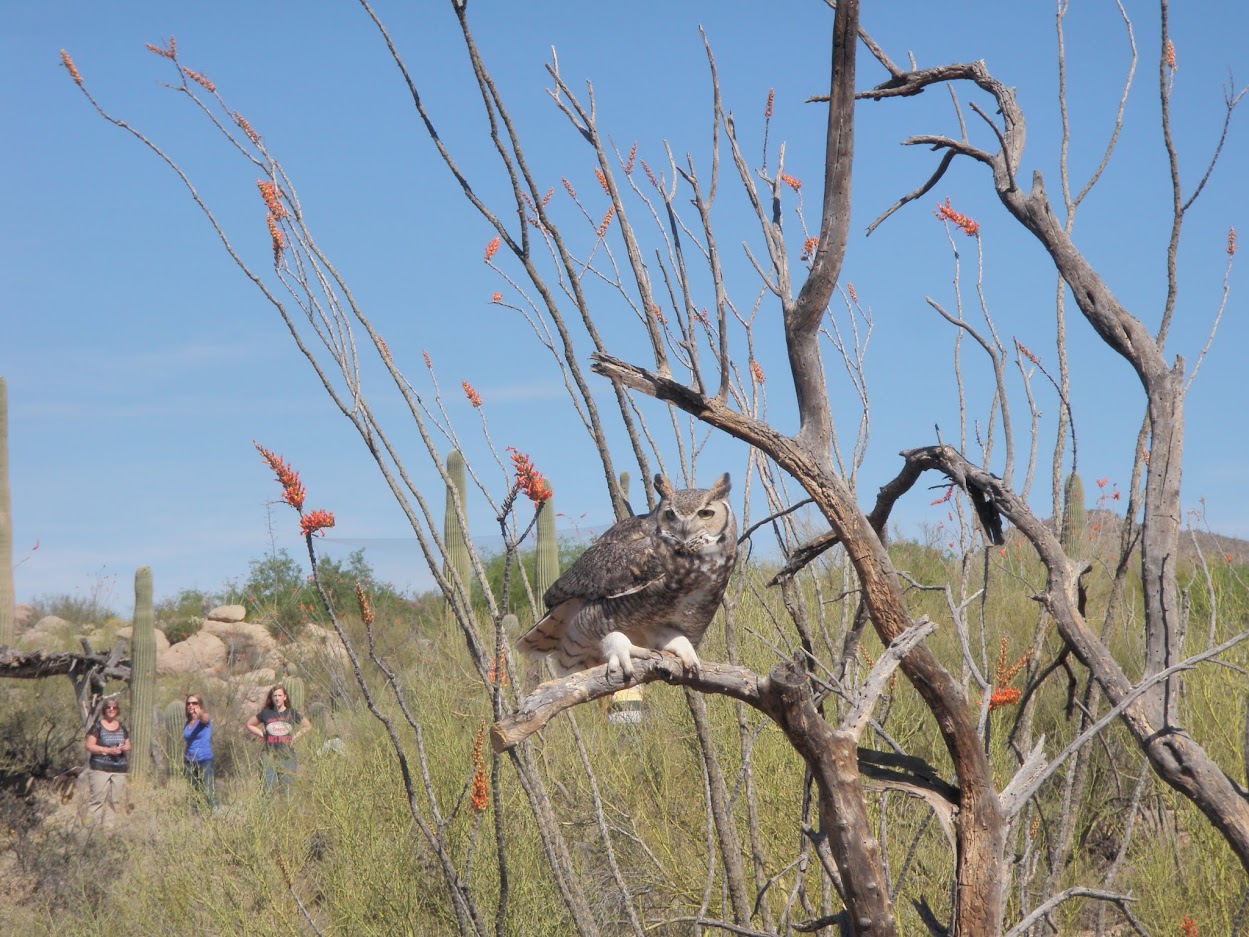 Jane and I gathered with the attending crowd at 11AM for the birds of prey demonstration. An announcer introduced the stars of the show, and then each bird was released sequentially. First a raven appeared, and it swooped and fluttered overhead while periodically perching on a trainer’s gloved hand. Next a great horned owl was released, and this majestic bird went through the same trained routine. Even though the birds were trained to follow a sequence of stops, it was nevertheless exciting when they swooped within a foot or two of our heads. The last performer was a falcon, but in the middle of flying from perch to perch, it got distracted by some natural hawks in the area. 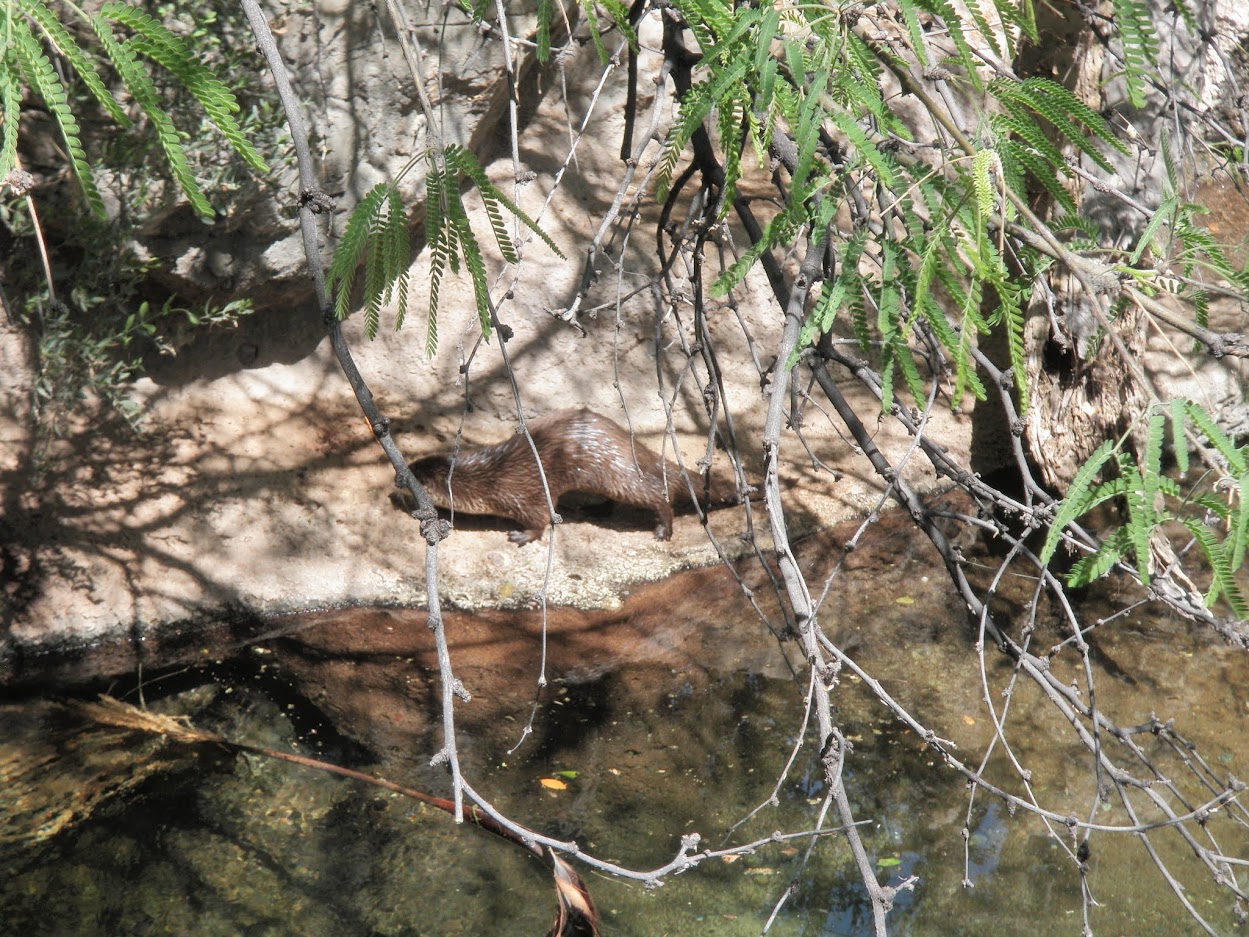 The second show that we attended was a reptile lecture in one of the theaters. This was scheduled for early afternoon, and being inside was a nice respite from the midday heat. Two presenters displayed a gila monster and rattlesnake on a rectangular table at the front of the auditorium, and they were extra careful to use long metal poles to continually reposition the reptiles and prevent them from escaping the table. The gila monster was particularly interesting to me as it is a fairly large venomous desert dwelling lizard. We learned that gila monsters predate lizards on the evolutionary path. Jane possesses an extreme snake phobia, so I was proud of her ability to endure the rattlesnake talk. She even admitted that she learned quite a bit, and the knowledge will enable her to better understand how to avoid the poisonous serpents, but her phobia remains as strong as ever. 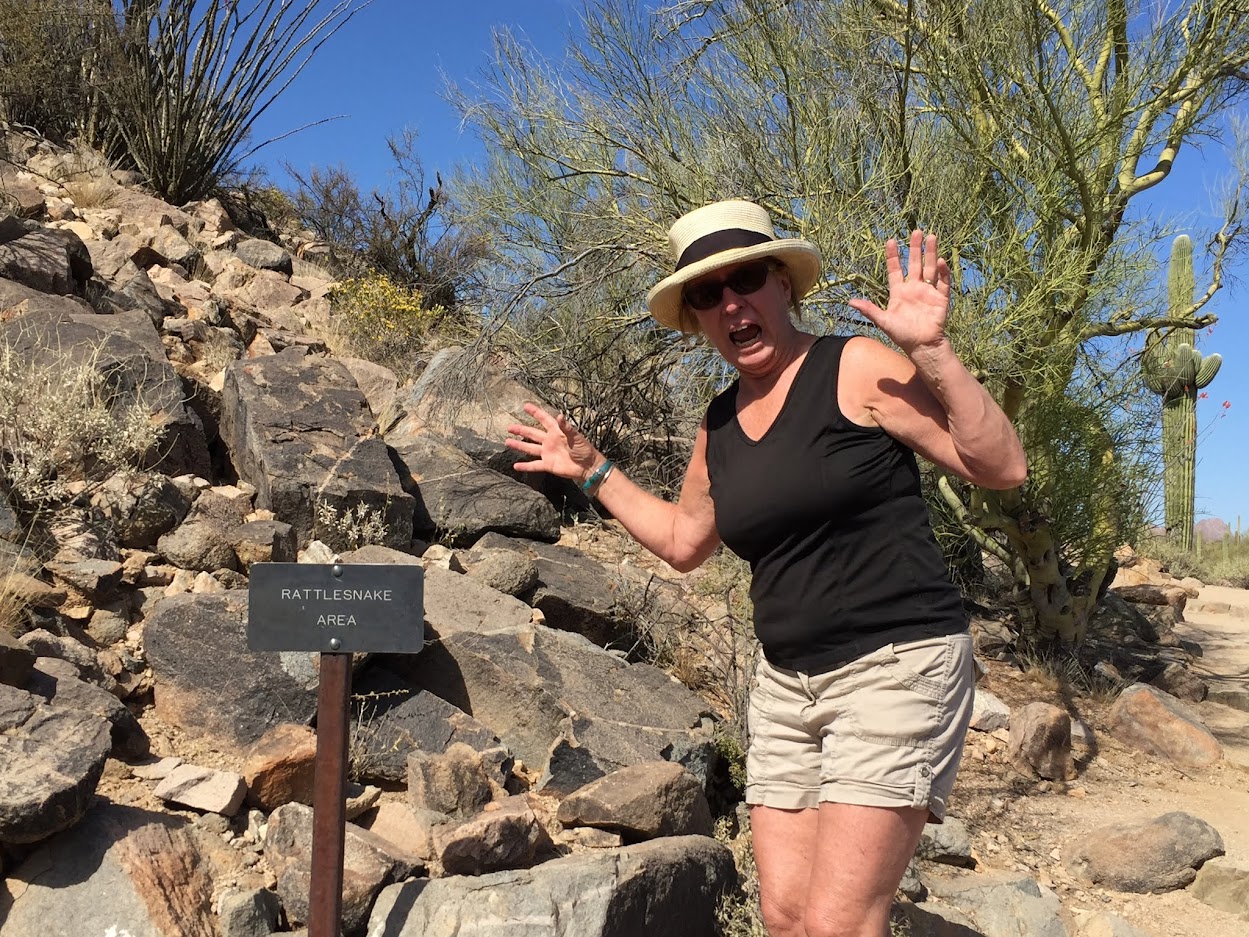 By 2:00 we covered nearly all the displays and areas within the desert museum, so we moved on to the Tuscon Mountain District of Saguaro National Park. Similar to the Rincon District, there was a single one-way loop road that we were encouraged to drive. The name of the road was Hohokam. Near the start we found a picnic area that contained one covered ramada in the center. We backed into a parking spot there and once again carried our cooler and food bin to a table and enjoyed a quick lunch. After lunch we continued on the loop to the Signal Hill area. We parked and completed a short hike to an area that contained numerous petroglyphs, and then we returned to the car and exited the park. 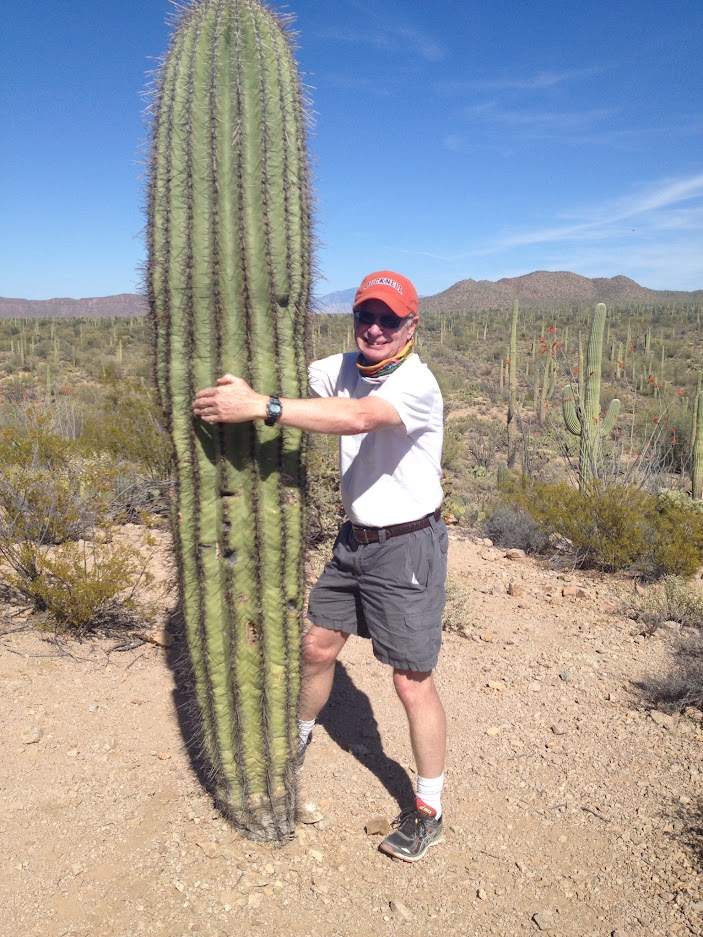 Once again we were both feeling very lethargic from the unaccustomed sun and heat so we returned to the Baymont, a shower and some rest. Since we learned that one cannot take lodging and baseball game tickets for granted during the middle of March, we busied ourselves with reserving a room for Monday night in Phoenix and also purchased seats for the Monday night baseball game at Salt River Fields. The effort to find reasonably priced lodging in Phoenix did in fact prove to be a challenge. Eventually we settled on the Best Western Metro Center Inn at a cost of $100 per night. Some derogatory reviews on Yelp caused us concern, but lacking other attractive alternatives, we made the plunge.

For dinner we both hoped to try some Thai food, and I found a small family owned restaurant called Saing Thai Cuisine. It was rated very high, and we were both excited to give it a try. Unfortunately when we arrived a sign on the door informed us that the restaurant was closed even though the web site noted that closing time was 8:30, and we arrived at 7:00. While we sat in the car consulting with our smart phones attempting to find another nearby option, a woman appeared from the small establishment, and she informed us that she closed early because it was her mother’s birthday. How can one be upset with that excuse?

We settled on another restaurant in the vicinity called the Happy Wok. We both rated it average, as it offered the normal Chinese dishes in fairly heavy sauces. It was not our favorite, but it fulfilled our need for sustenance.