Finally the weather warmed a bit, and Thursday would yield high temperatures in the upper 60’s allowing me to remove the three layers that I began with in the morning and fish with just my fishing shirt for most of the afternoon. Todd and Mary took a guided horseback ride to a mountain lake for the day, so Monte joined me in an inflatable raft as we drifted beat nine of the Rio Manso. Our guide for the day was Diego, the head guide for the lodge, and the most accomplished speaker of English among the staff. Diego is a fourth generation Argentinian but descended from English immigrants, and each generation has taught the succeeding generation English.

Diego informed Monte and me that we would be fishing beat nine on Thursday, so we threw our gear in the truck, and departed for one of the more distant stretches of Rio Manso. The trip took in excess of an hour and traversed mostly dirt roads. On a map the distance doesn’t look nearly as far, however, the roads form three sides of a rectangle as we traveled east and then south and then west to get to a location almost directly south of the lodge. Diego told me that the river flowed through one more beat before crossing the border into Chile and ending in the Pacific Ocean.

Near our final launch point we turned on a crude dirt road and passed some sparse campgrounds before stopping across from a small cabin. A man was outside the cabin, and Moncho and Diego exchanged some conversation, but the content escaped me due to my lack of understanding of Spanish. Moncho drove beyond the launch point and then expertly backed the trailer and raft around the turn and into the river. 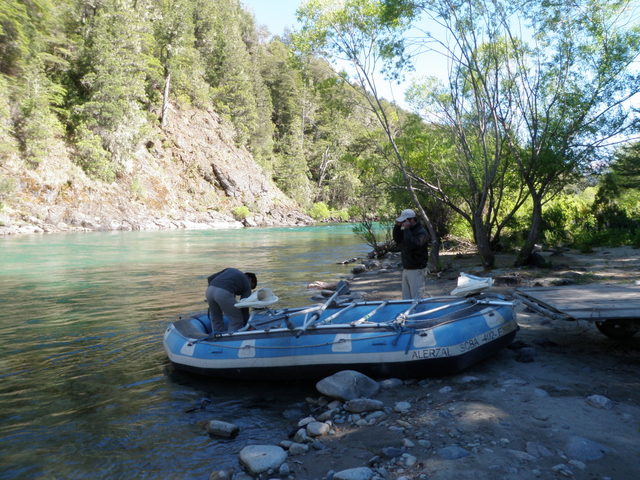 Moncho and Diego Prepare the Raft for Another Day of Fishing

Monte and I rigged two rods and as Diego and Moncho loaded the raft I spotted a loud substantial rise fifteen feet out from the bank and 15 feet below the raft so I decided to make a few casts. I tied on a chubby Chernobyl and made numerous drifts over the location of the rise and on around the tenth pass a fish rose and crushed the large foam attractor. The fight was on and twice the trout made strong downstream runs, so I allowed it to pull out line until finally it tired enough for me to gain line. Diego took a break from loading the raft and came down with his net and landed a gorgeous 21″ brown trout. What an exciting way to start our day of drifting the river, and for the third consecutive day I landed a brown over 20 inches. 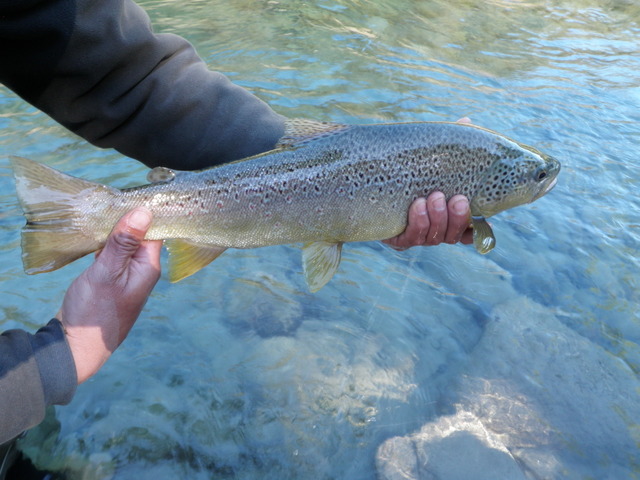 We were now ready to begin our float so Monte and I jumped in the raft and Diego deployed the oars and maneuvered us into the main current. I elected to begin in the rear of the raft with the expectation of moving to the front in the afternoon, but I was experiencing enough success from the rear to maintain my position for the duration of the day.

The method of fishing was pretty much consistent throughout the day as I kept the chubby Chernobyl on my line and launched casts toward the bank attempting to place my fly as close to the vegetation as possible. In the morning I landed a couple more small brown trout below our starting point, but after that the catches became entirely rainbows. 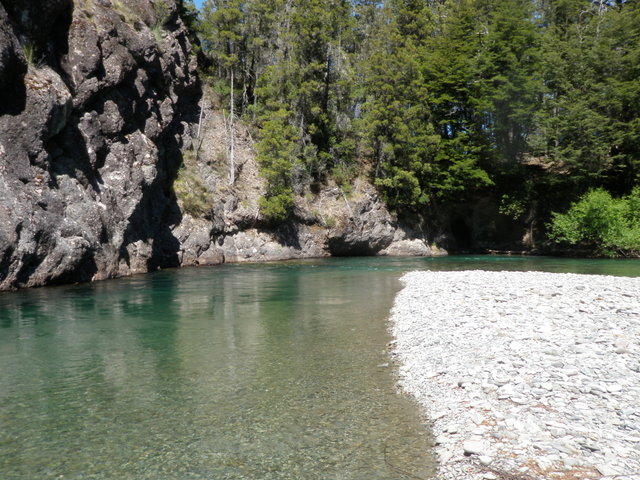 A Gorgeous Side Channel We Wade Fished

Unlike the previous day we stopped and pulled the raft up on the rocks more frequently and wade fished attractive side channels and slack water areas. The length of the beat was probably shorter so these stops served the purpose of extending the time of the drift. I normally enjoy wade fishing more than drifting along and popping attractors from a boat, so I was in favor of the wade fishing interludes and truthfully would have liked to spend even more time focusing on the areas where we stopped. A large portion of my enjoyment of fly fishing is spending  time reading water, spotting fish, and observing the insects that allow me to choose flies that mimic what is present in the nearby environment.

During the course of the day we spotted numerous rises, but most appeared to be small rainbows. During one stop as I fished a small side channel, I spotted a refusal to the chubby Chernobyl so I decided to deviate from the guide’s recommendation and try some of my own flies. I first tried a size 14 caddis, then a light gray comparadun, and finally a parachute hopper, but none of my choices of personally tied flies caused the trout to rise again. I enjoyed the process of trying to solve the riddle in spite of my lack of success.

We stopped for another fine lunch shortly after this experience, and afterwards I returned to the chubby Chernobyl, and it was in the hour after lunch that a nice thirteen inch rainbow smashed the attractor dry as we were drifting over a riffle. This would prove to be the nicest fish of the day other than the large brown that I landed before we even began the drift. 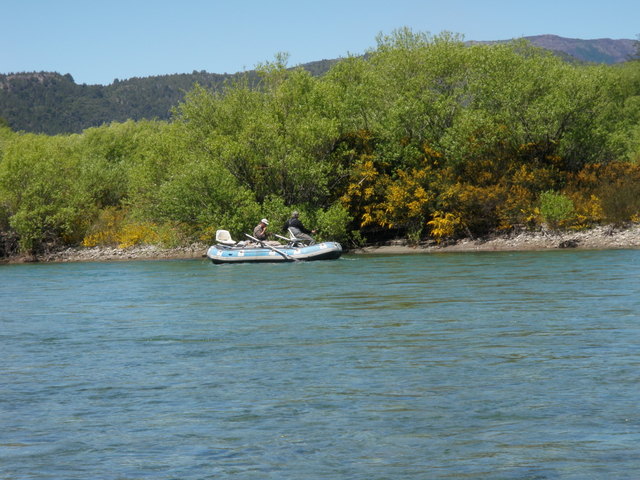 During another stoppage around mid-afternoon while wading I decided to add a twenty incher as a dropper off the chubby Chernobyl. I kept it on my line as we returned to the boat, and the twenty incher proved its worth as it produced a small rainbow as the flies drifted along a nice run a few feet from the bank. This fish became my thirteenth and last fish of the day as we reached our end point at 5PM where a narrow pedestrian bridge crossed the river. Moncho was waiting, so Monte and I took down our rods, and the two staff members muscled the heavy raft up a very steep bank and then on to the flat trailer.

It was a fun day on Rio Manso as I landed the most fish of any day during the week in Argentina. Unfortunately my best fish came in the first hour and the other fish were mostly in the 8-11 inch range except for the 13 inch fish landed after lunch. I did enjoy casting dry flies most of the day, and that was a pleasant relief to my weary arm, back and shoulder. The warmth of the sun was pleasant and the late spring weather finally equaled my expectations. I also enjoyed the numerous breaks from drifting in the raft, and the opportunities to observe the water and try different flies and approaches.

The weather forecast was favorable for the remainder of the week, so I was anxious and optimistic for Friday and Saturday.