Location: Beat 3 ending at lodge after going through Lago Hess

By now Jane and I had fallen into a nice Rio Manso Lodge routine. We typically woke up between seven and eight in the morning and went downstairs to the dining area where we were pampered with a delicious breakfast. Diana and Noy acted as servers in addition to their other duties. Diana managed all the customer facing aspects of the lodge experience including scheduling the drivers for shuttling fishermen and other guests to their activities for the day. There were only three trucks and ten guests, and trips to take guests to the airport and pick up food and supplies needed to be incorporated into the plan. In addition Diana managed the bar and served meals and acted as a general concierge for the guests including helping with travel plans.

Noy appeared to be Diana’s assistant and was also amazing. Somehow she seemed to be everywhere at once and also knew our preferences within a day of our stay. When Jane and I felt a need for something, Noy was always right there. She knew what drinks we preferred, what we ate for breakfast, and whether we took sugar in our tea or coffee. At the end of the week we both wanted Noy to return to Colorado with us. We were completely spoiled by her constant attention to our needs.

Breakfast consisted of small pastries, several large plates of fresh fruit, yogurt, granola, corn flakes, tea or coffee and, if desired, eggs and bacon. I never left the lodge hungry before my day of fishing.

After breakfast we split off to our various activities. Jane typically undertook numerous hikes with and without guides and in addition went white water rafting one day and also observed the cooks making Argentine specialties in the kitchen. I meanwhile gathered my gear and headed to the fishermen room where I climbed into my waders and wading boots. When I was ready, I exited the lodge, and my guide was always waiting to escort me to our assigned fishing destination for the day.

After our day of activities we returned to the lodge and showered and changed and descended to the great room where a roaring fire was normally in progress. Diana and Noy would serve us drinks if we desired, and the guests shared stories about their daily adventures in front of the fire. By 8PM large trays of appetizers appeared on the coffee table, and then at 10PM we were ushered into the dining room for dinner. After dinner some guests remained to socialize, or when it was a particularly tiring day, we would excuse ourselves and head back to our room for rest.

On Wednesday morning I stepped out of the fishermen room and discovered that I would be fishing with Niko on beat three of the Rio Manso a few miles up the road from the lodge. We would drift down the river and through Lago Hess and end near the bridge by the lodge. This would be my first outing with a guide other than Matias and also my first day on the river rather than on a lake. I was rather excited to have a flowing water fishing experience in Patagonia so I jumped in the truck, and Moncho served as our shuttle driver and took us to the launch point. We drove the truck and trailer down a short rough dirt lane, but we had to stop twenty yards short of the river because the shrubs and trees had overgrown the road. 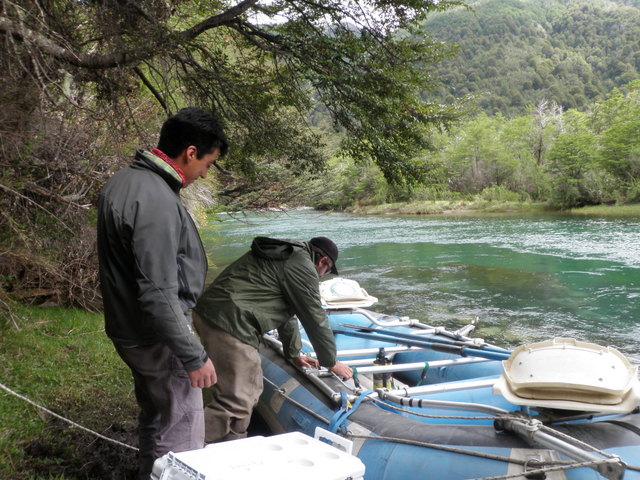 Niko and Moncho pushed the inflatable raft off the trailer and then muscled it over the dirt and grass and then down a steep bank to the river. Niko readied the raft for our day of fishing while Moncho carried the remaining items from the truck to the watercraft. While this was going on I rigged my six weight with a sinking line and my four weight with a floating line.

Wednesday’s weather was unsettled similar to Monday with more cloud cover than Tuesday, and it actually drizzled for brief periods several times during the day. The ever present wind was also an issue, although floating the river seemed to offer more protection compared to the exposure of being on the surface of a wide open lake. Once we had the gear in the raft, and we were settled in our positions for the day, Niko expertly rowed across the main current and then used his strength to go upstream against the current to a nice wide riffle stretch with moderate depth.

From previous experience Niko knew that fish were attracted to small mayflies in this area, so he tied a parachute Adams to my tippet, and I began making nice drag free downstream drifts, and in a short amount of time, I landed a small rainbow trout. Once we drifted downstream from this area, Niko suggested that we switch to a larger attractor pattern, so I tied on a lime green trude for a bit, but that didn’t produce any action. Next Niko clipped off the trude and tied a large foam chubby Chernobyl to my line, and I prospected with this buoyant highly visible fly for most of the remainder of the morning. I landed two more small rainbows during the late morning float with one coming from a long riffle stretch just before lunch. The catch rate wasn’t great, but I was enjoying casting the light four weight rod and challenging myself to deliver the fly to tight spaces along the bank beneath overhanging brush and tree limbs. The river was absolutely crystal clear and when viewed from a distance appeared to be blue or aqua in color.

We pulled the raft up on the shore after the long riffle, and Niko spread out the typically splendid feast. After lunch I decided to experiment with a nymph dropper, so I tied a 20 incher below the large foam attractor, and in one nice section where the main current flowed near the bank bordering the road, I landed two rainbows on the trailing nymph. Both fish grabbed the trailer at the tail of the drift as the flies began to swing or lift. 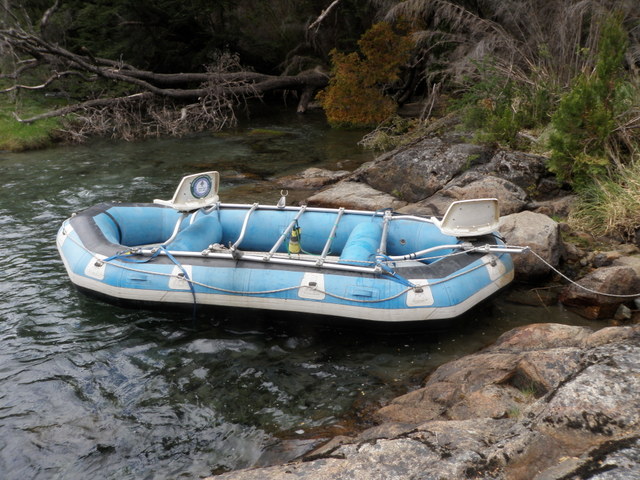 The Raft Is Empty and Ready to Be Guided Through Rapids

Toward the middle of the afternoon we cautiously approached a difficult white water rapid, and Niko pulled the raft up on a rock in some slow moving water just before the drop off. We climbed out of the raft and inspected the downstream cascade, and then returned to the raft and moved all the contents on to the bank. When Niko was ready, he pushed the raft out into the current and then ran along the rocks and guided it through the roaring white water that plunged around a large midstream boulder. The raft bounced off the large exposed rock and slid toward the cliff that Niko was standing on, and then Niko moved forward and tugged the raft free of the cliff rock. This caused the inflated boat to spin back toward the middle and then gently drift out of the fast water, and Niko guided it up on to the beach below the narrow danger point. We portaged the contents of the boat in several trips and arranged everything the way it had been prior to the turbulence and continued on our way. 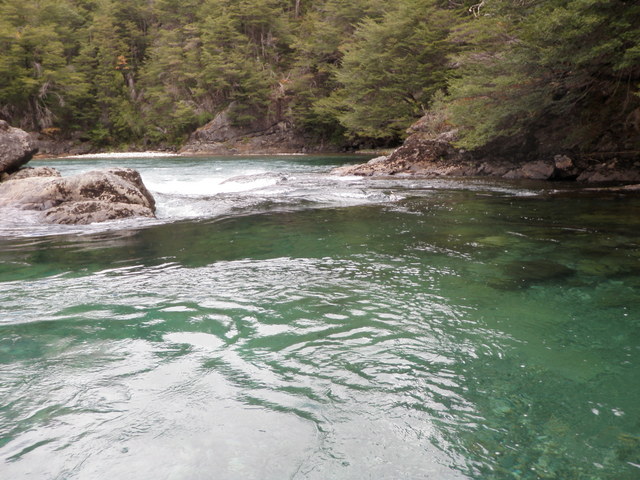 We Rode Through the Next White Water Section

Just below the narrow chute we had just circumvented was another plunge with fast water and protruding rocks, but Niko navigated this skillfully while we remained in the raft. Roughly halfway between the whitewater stretch and Lago Hess we approached an area where the river created a still lagoon off the main channel. There were two indentations here with virtually no current, and the open areas were bordered by numerous fallen branches and logs that extended to the bottom of the deep pool. The water was so clear that I felt I’d be able to spot any trout and seeing none, I despaired of catching any fish.

Niko by this time had switched out my fly to a foam body Madam X, and he insisted that I cast into the first open area. I followed his instruction and dropped a cast in the first open space and allowed it to rest, but no fish were visible. Next we floated downstream a few feet so I was positioned to hit the second opening, and I made another cast so that the Madam X settled in the the opening but a few feet from the fallen debris on the far side of the river. Niko looked away for some reason, but as he did, I saw a large torpedo shape slowly come into view. My heart raced as the football calmly swam to the surface and sipped in the Madam X! Where did this gift from the fishing gods come from?

I set the hook and the big guy immediately began to thrash and dive. As mentioned earlier there were numerous branches and sticks that entered the river from the bank and extended to the bottom below the surface. The large fighter I was connected to made a beeline for the debris, and succeeded in wrapping my line around one of the branches. I momentarily despaired that I’d lost the fish, but Niko nudged the boat in closer to the hole so I could apply pressure from a different angle more directly above my opponent, and a miracle happened. I raised the line and it was free of the branch and the weighty trout was still attached and battling for freedom. I managed to pressure the fish from the side so that it was extracted from the still pocket containing sticks and branches, and guided it back out to the edge of the main river, and after a couple more brief dives, it was in the net. Now we could see that the fish was a hook jawed old brown, and Niko measured it to be 22″. I’d experienced a second brown trout thrill in Patagonia. 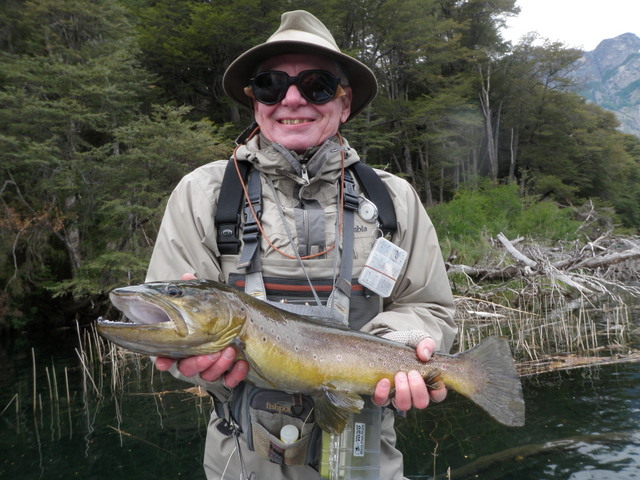 We carefully released the second largest brown I’d caught in my life and continued the float and fairly quickly reached Lago Hess. By now the wind had kicked up in a major way, and Niko worked hard to position me to make some casts along the weeds near the spot where the Rio Manso entered Lago Hess, but unfortunately I was not rewarded. It was now approaching pick up time, and Niko needed to row the wind resistant raft across the lake and into the waves to get back to the exit point, so I reeled up my line and hunched into the wind and held my hat on my head. Niko was up to the challenge, and we turned the corner and entered a narrow slow moving channel. This water looked very attractive, and Niko had me prospect as we slowly moved through the channel to the take out point where the truck and trailer were waiting. In spite of my best efforts to tempt fish to the surface in the channel, it did not produce, and my fishing day was at an end.

Niko told me that toward the end of December the channel is one of the best places to fish dry flies in the evening as fish will rise to caddis and mayflies. Catching large resident lake fish on small dry flies sounds like a future experience to dream about. Overall it was another unseasonably cool day with slow action, but the 22″ brown certainly made up for a lot of fruitless casting. I have to admit that I was disappointed with the river fishing, and I wondered if the large fish remained in the lakes and left the rivers to their smaller relatives. There were still three more days to test the theory.