Location: Along the Piney River Trail

The alarm beeped at 5:30, and I left the house by 6AM. I packed the car with all the essentials the night before, so after a quick bite to eat, I packed my lunch and quietly departed. The planning and early start enabled me to pull into the parking area at the Piney River Trailhead by 8:30.  It rained heavily from the Eisenhower Tunnel, until I reached Vail, but the sky was blue, as I turned on to Red Sandstone Road. The dirt road was extremely muddy, and the Santa Fe was covered with red caked mud by the time I parked at the trailhead. After putting on my waders, I gathered my gear and assembled my Orvis Access four weight, and finally I was on the trail by 9:00. I hiked for thirty minutes, and then I cut down to the stream and began my day.

The air temperature was in the upper forties, but I knew I would be too warm, if I hiked with an extra layer, so I stuffed my raincoat in my backpack for extra warmth if necessary. When I waded into the stream, it was evident that flows were down compared to my previous visit on 7/25/2017. 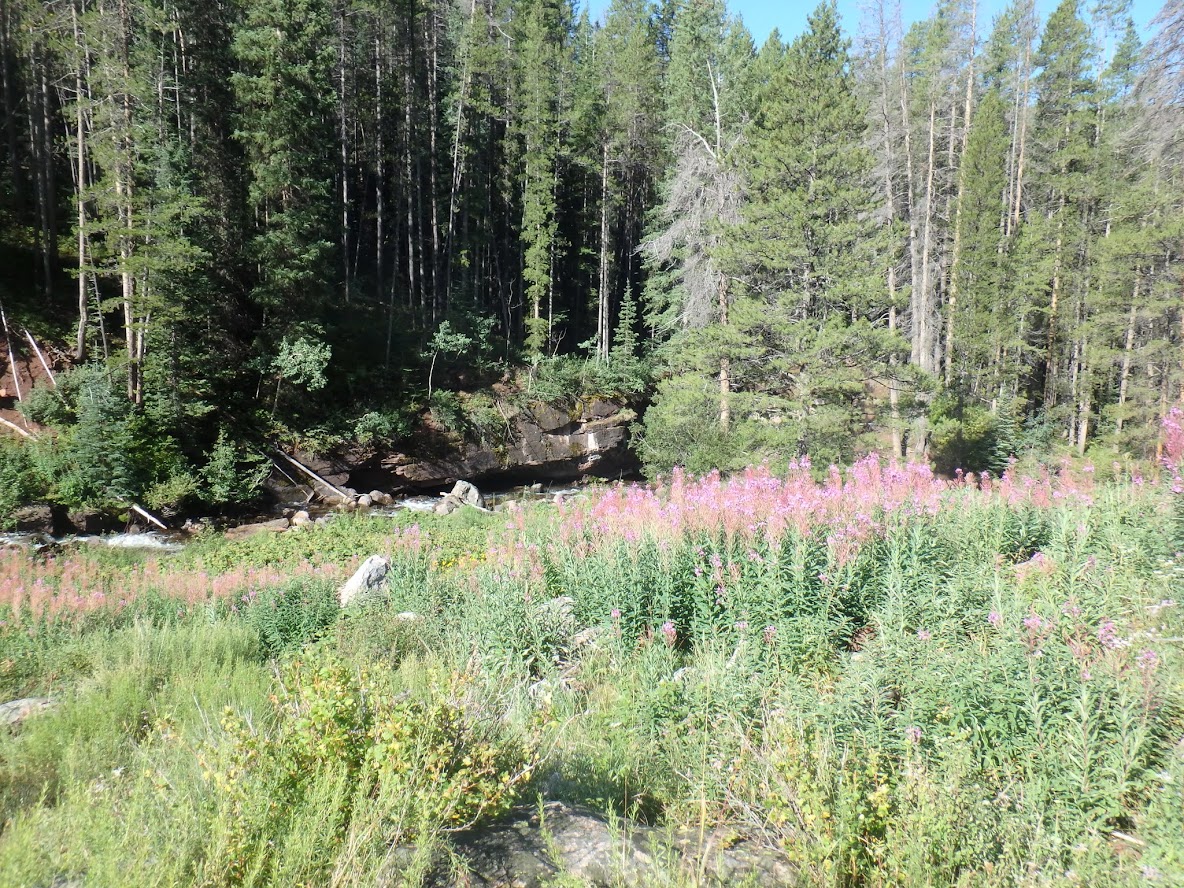 A Dense Stand of Fireweed

On the 7/25/2017 trip I fished a gray stimulator nearly the entire time, so on Thursday I began with a peacock body stimulator. My supply of gray versions was dwindling, so I hoped to learn that the fish were not discriminating regarding body color. I fished with this fly for ten minutes through some slow moving smooth pools, and then I also tested it in some faster pockets, but it failed to encourage even a look. I concluded that the body color was important, so I swapped the peacock for a gray body, since that was a proven producer on the earlier trip. On Thursday gray was not in favor. Maybe yellow was a winner, since I saw a few yellow sallies in the air? Nope. After a decent trial period it became obvious that the yellow stimulator was avoided like the plague.

I continued moving upstream, and I was certain that I advanced to water that was rarely fished, once I vacated the slow pools where I began. Tamped down grass and weeds were obvious clues that other fishermen visited the starting area, but the banks appeared to be untouched, once I progressed one hundred yards upstream. Where were the fish? Even looks and refusals were absent, and that was very unusual for Piney River. 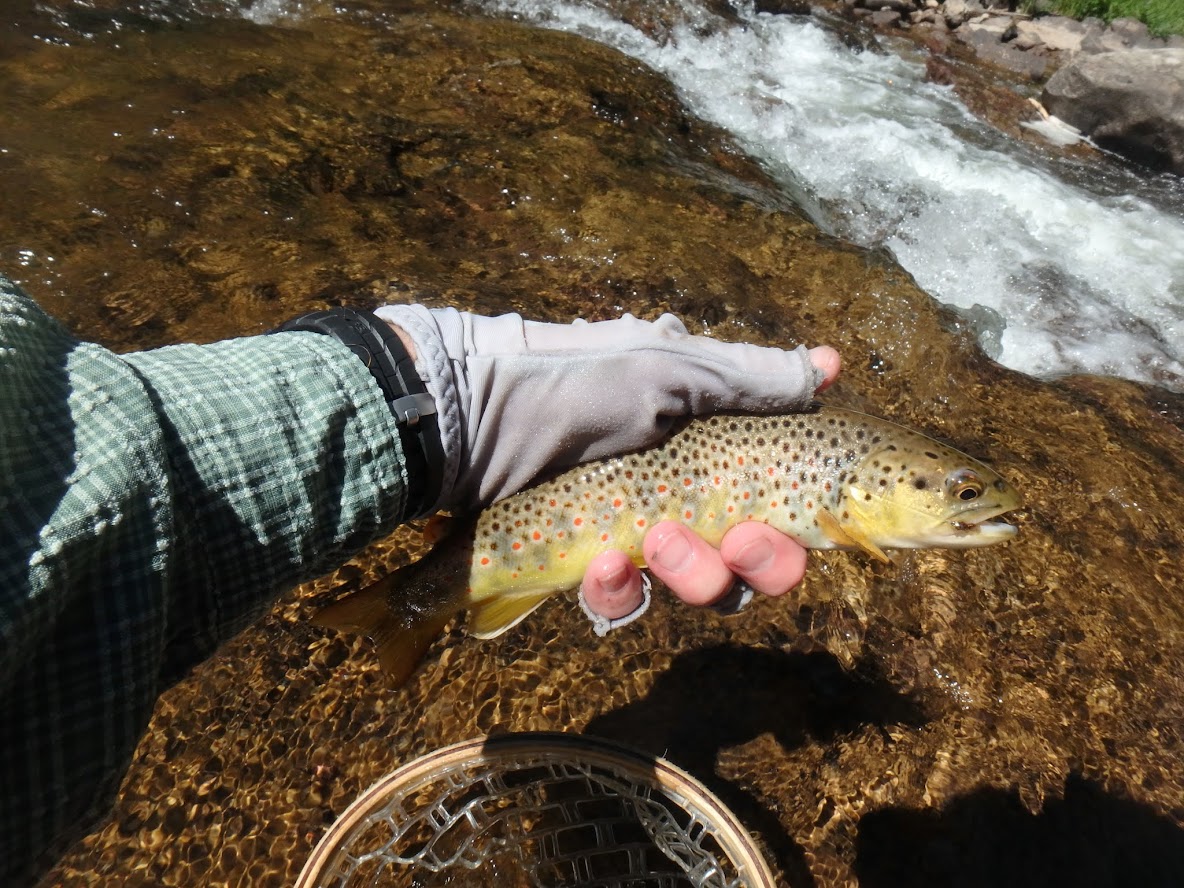 I decided to try a nymph approach, so I tied on a size 10 Chernobyl ant and trailed a beadhead pheasant tail. Finally I registered two small brook trout and breathed a sigh of relief. A small brown grabbed the pheasant tail in a fast run almost immediately after the nymph entered the water, and I reached three fish for the first hour of fishing. I continued on with the two fly offering, but once again quality pools and pockets failed to deliver any looks. In another desperate attempt to solve the code, I abandoned the dry/dropper and returned to a medium olive body stimulator, and this fly enabled me to land two small brown trout to improve my fish count to five. 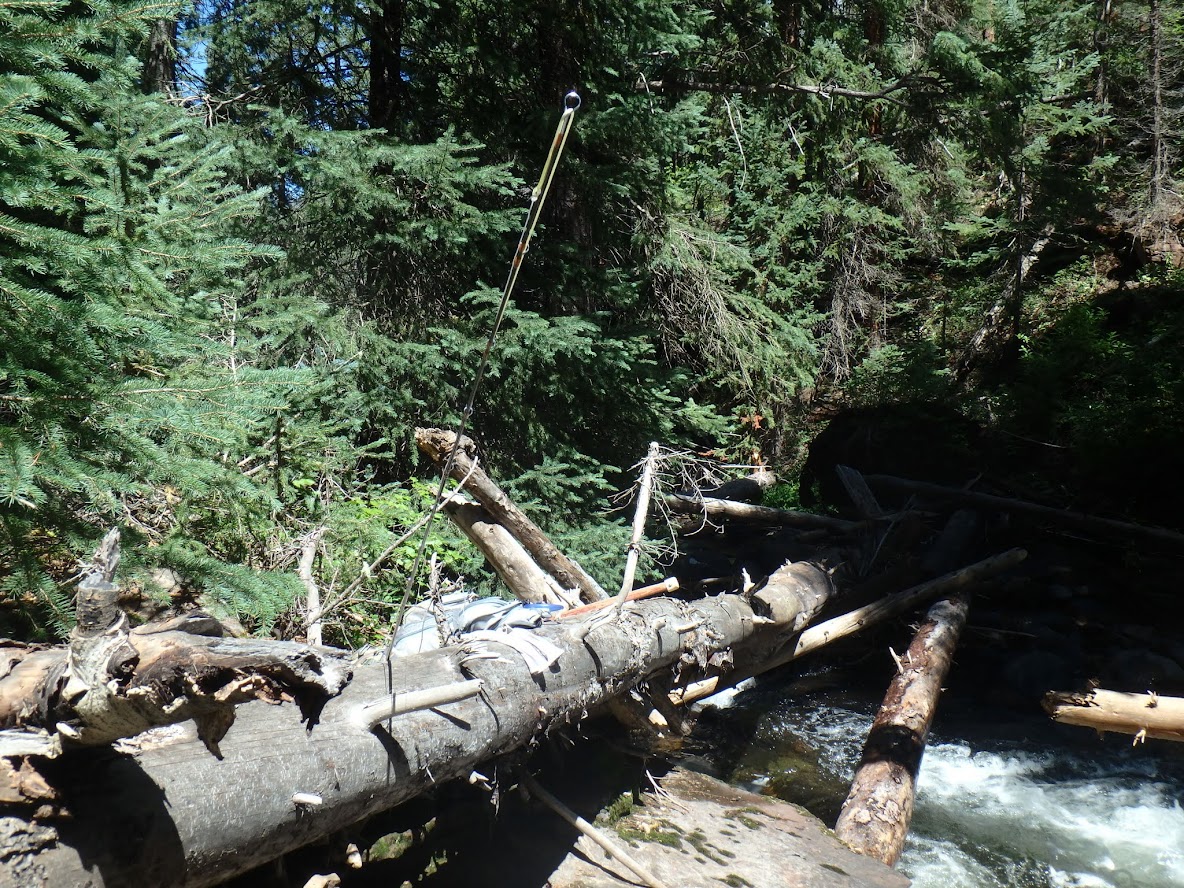 I remained locked on five for quite a while, and I sat down to eat my lunch at noon on a nice flat rock with the fish counter stable at five. After lunch I decided to experiment with a green drake. I spotted a few on July 25, so perhaps the local trout had long memories. First I tried the Harrop hair wing version, because it floats high and is easier to follow in the turbulent currents compared to the comparadun and parachute styles. Two brown trout crushed the Harrop hair wing, and I cautiously raised my expectations, but my optimism was fleeting, as the Harrop floated through a series of attractive spots without inducing even a look. 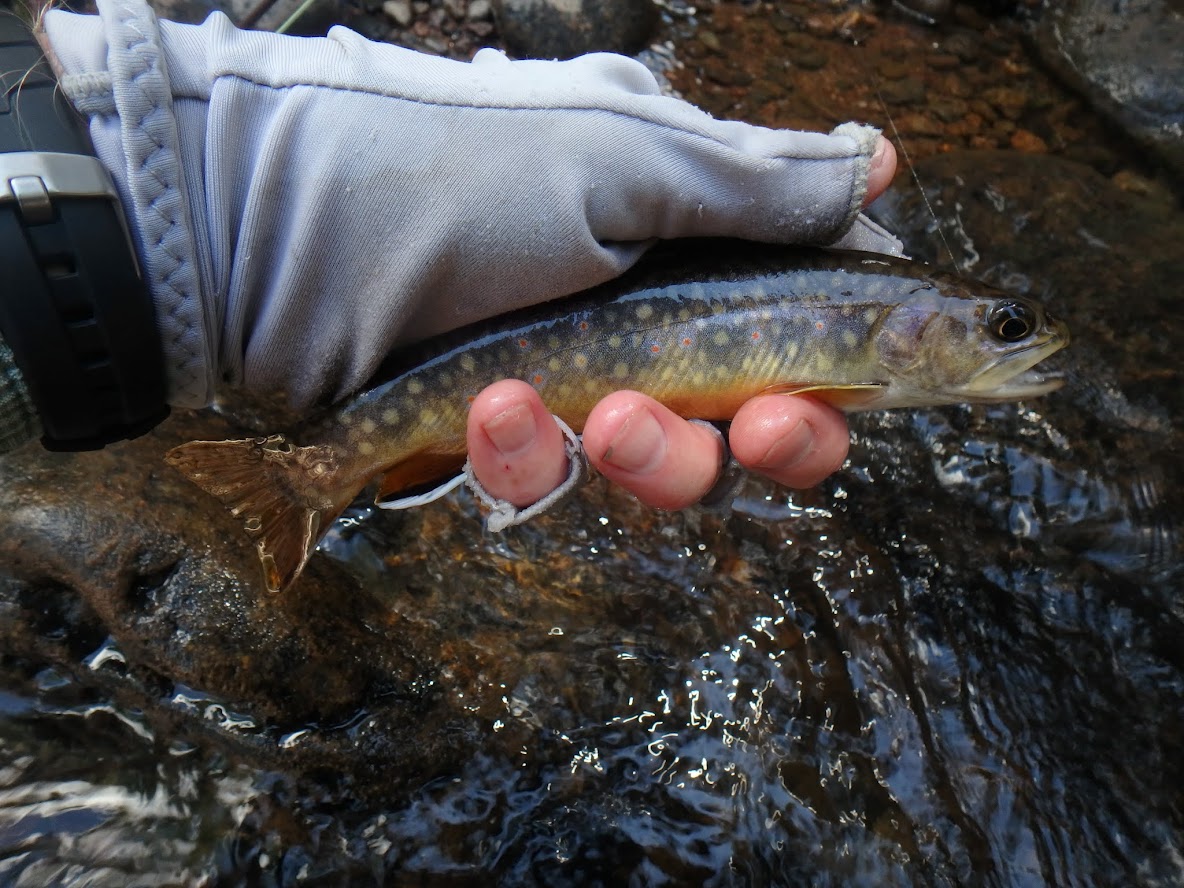 When this occurred on Tuesday I switched to a parachute green drake, and I copied the move on Thursday. I tied the very same parachute green drake to my line that produced nearly twenty fish on Tuesday, and surprisingly it delivered three, and the fish count climbed to double digits. I was now perched on ten fish in a couple hours of fishing, but I was not pleased with my Piney River experience. The fish were very small and consistently in the 6-9 inch range, and they were all brown trout with two or three small brook trout in the mix. Where were the gorgeous cutbows, cutthroats, and rainbows that served as eye candy on my previous trip? In order to land the first ten fish I covered an enormous amount of stream real estate, and quite a few prime pools failed to yield even a look or refusal. I could not get into a rhythm, and consequently I spent an inordinate amount of time changing flies. 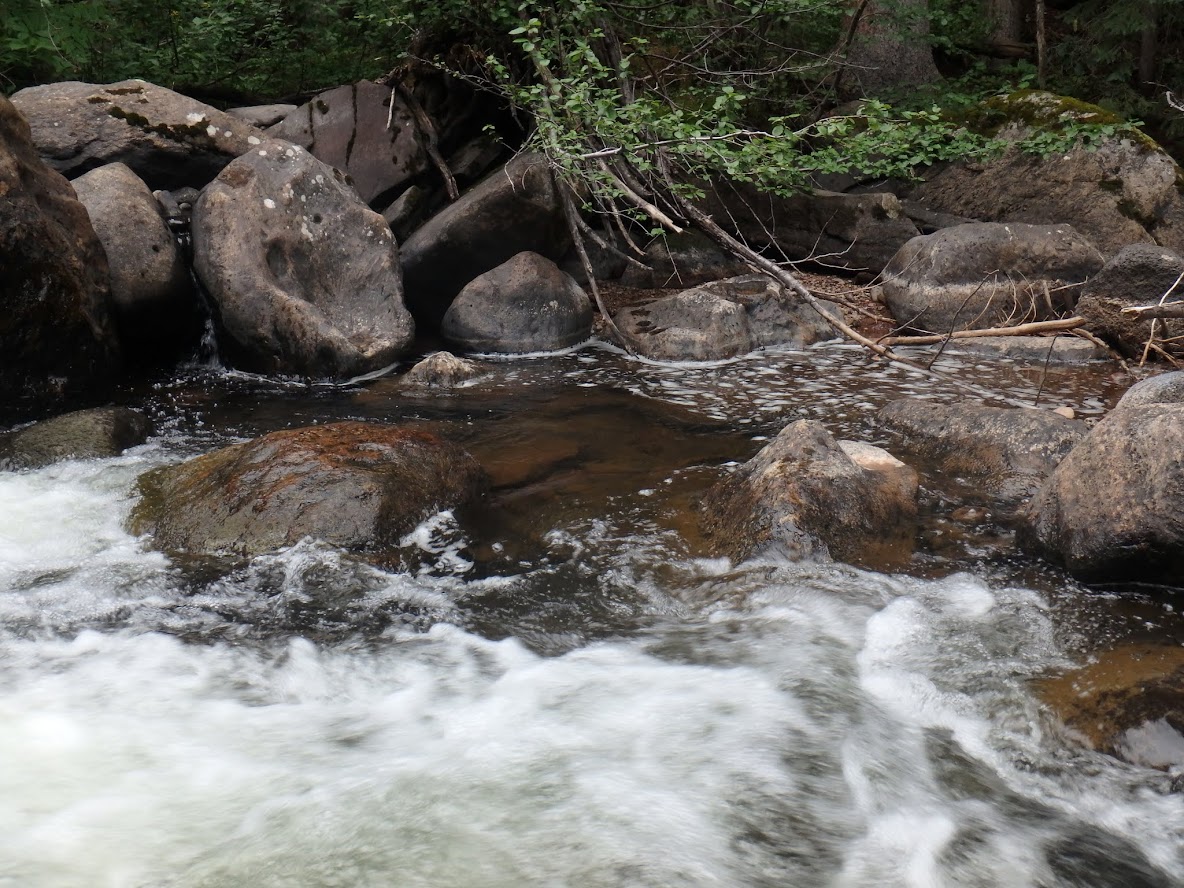 Because the parachute green drake delivered three small trout from marginal shallow pockets, I relied on it for a fairly long window of time, but empty casts became the norm, and several fish elevated and looked and then returned to the bottom of the stream. In addition the body was waterlogged and required constant dabbing and drying. Finally the fly got snagged on a stick, and when I yanked it free, the parachute hackle climbed up the wing post. This was a definite hint that I needed to retire the parachute green drake. 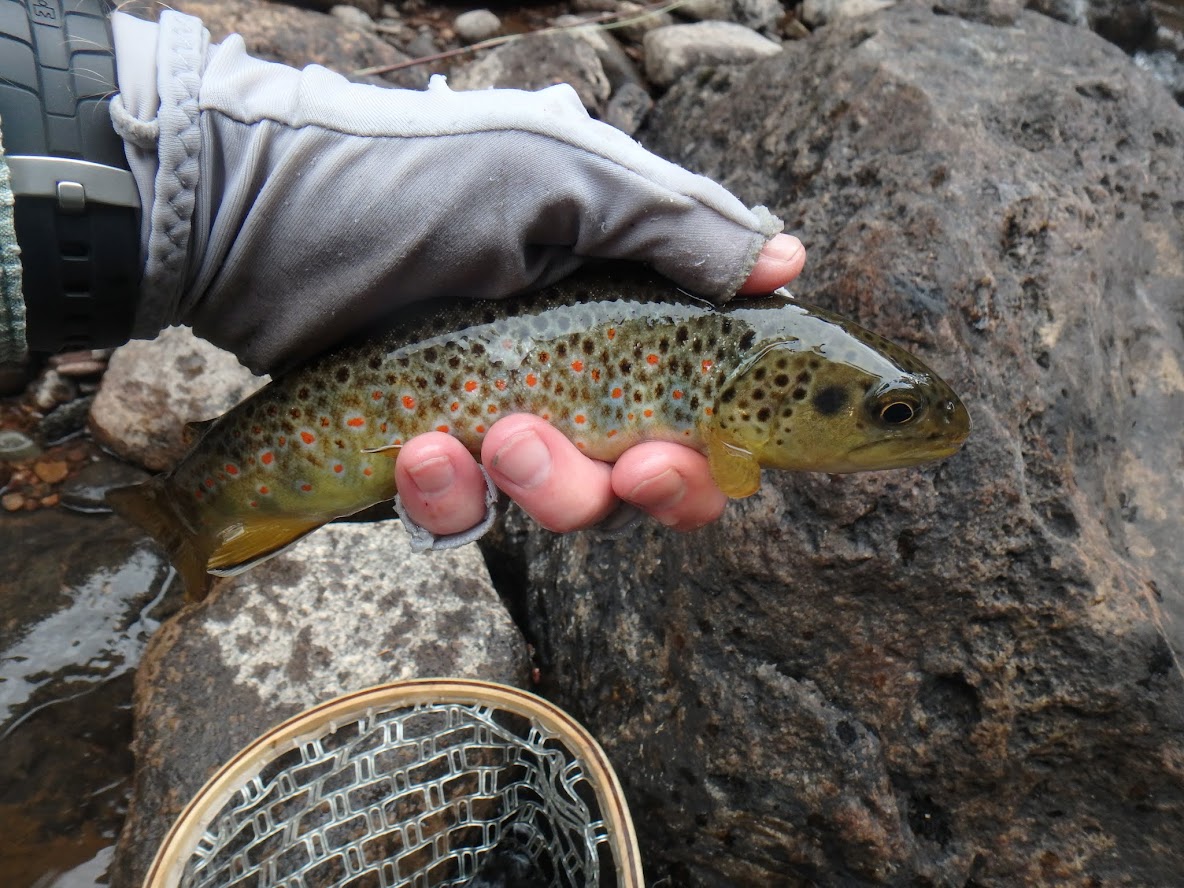 I paused and pondered my options. I tried the dry/dropper with the large Chernobyl, but perhaps a more realistic terrestrial would be a more enticing option. I knotted a Jake’s gulp beetle to my line and added a salvation nymph as a dropper, and I began plunking the foam beetle in likely holding spots. Early in this game a brook trout smashed the beetle, and once again I convinced myself that I solved the riddle. Again I was mistaken. I cycled through quite a few changes to the dropper including a beadhead hares ear, ultra zug bug and emerald caddis pupa; but none of these generated interest. Meanwhile a couple fish snubbed the foam beetle, and I my frustration level once again surged.

The beetle/dropper episode convinced me that nymphs were a waste of time, and the small stream residents were clearly focused on food morsels floating in the surface film. Perhaps the low clear water dictated going to a small realistic fly? I considered a parachute ant, but I was reluctant to engage in an eye exam in the shaded light of the narrow canyon. Instead I plucked a light gray size 16 deer hair caddis from my fly box. Success. After I embraced the caddis as my Piney River fly of choice, the fish counter improved from eleven to twenty-five. Most of these landed fish favored the light gray version, but I also netted a few using a size 16 dark olive deer hair caddis, and in addition a size 14 dark olive muggly caddis duped three. The muggly caddis eaters were actually a bit larger than the average fish landed on the day. 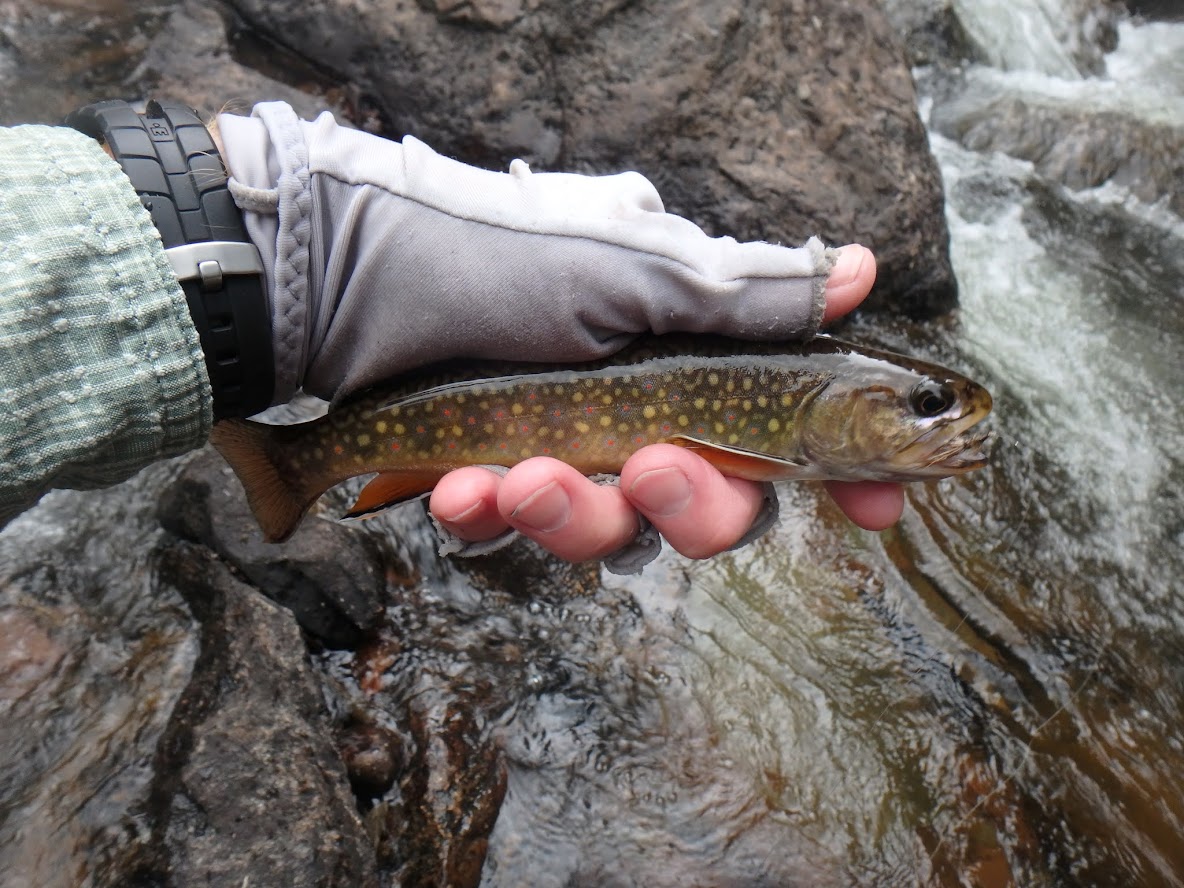 Caddis Favored by This Brookie 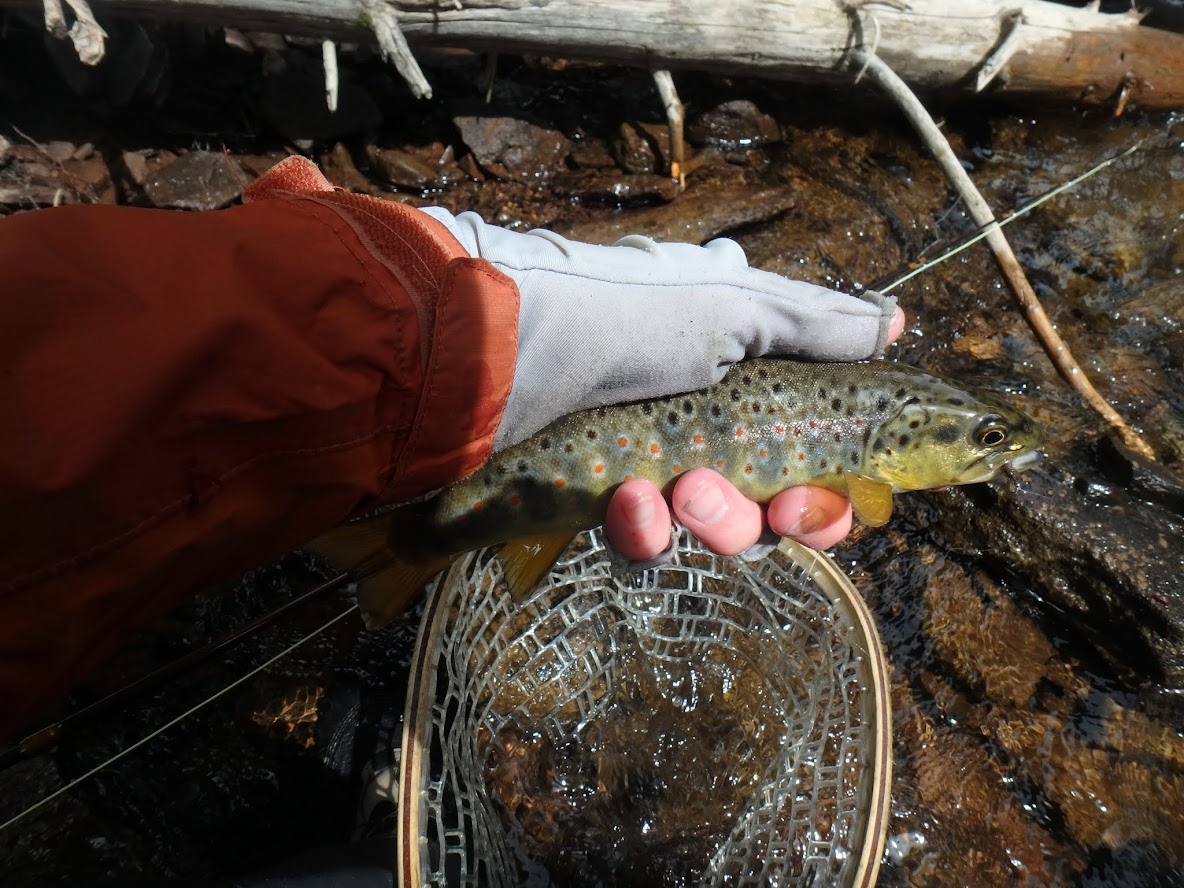 I lost two of the light gray caddis to hemlock branches, and I harbored concern over the adequacy of my size 16 light gray supply, so I tried a dark olive body for awhile. It did produce a couple fish, but then the hackle unraveled, and I elected to experiment with the muggly caddis. The muggly yielded three or four fish, but then the dry fly without hackle became partially waterlogged, so I exchanged it for another muggly with a light gray body and a light tan snowshoe rabbit fur underwing and an elk hair wing. This fly was very visible, and it fooled one trout, but then trout grew disinterested.

During the last thirty minutes of fishing I reverted to one of the remaining light gray size 16’s, and it once again delivered several netted fish. How can a 25 fish day be disappointing? It took place over six hours, and I covered in excess of .5 miles of water including some very high quality deep pools and pockets. The size of the fish was generally in the six to nine inch range with a couple that extended to ten or eleven inches. On July 25 I also landed a few small fish barely over the six inch cutoff, but the average size was more like 9-11 inches with a few big boys in the twelve and thirteen inch range. On Thursday I landed one rainbow and one small cutbow, and all the other fish were brown trout or brook trout. I loved the variety of fish species on the earlier trip, and the lack of diversity was the most disappointing aspect of the August 10 outing. Of course I endured the requisite quantity of long distance releases, and several seemed to be some of the larger fish on the day. I learned over time that this frustration is a necessary part of small stream fishing. 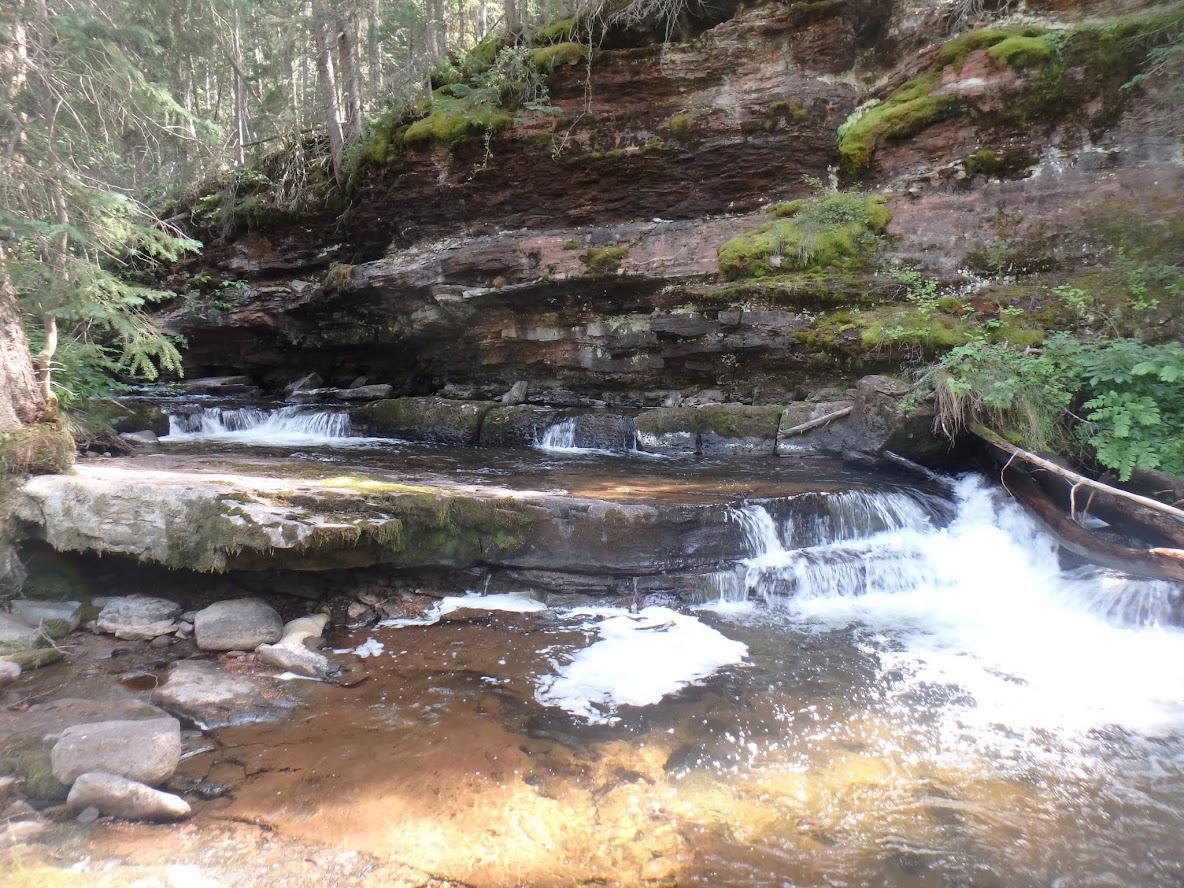 I Love the Look of Ledge Rocks

I covered new water, and aside from the fishing, the landscape was spectacular. I passed through high moss covered rock walls and climbed over and around numerous beautiful waterfalls. At ten o’clock as I stood in the stream changing flies, an elk cow and calf suddenly appeared from behind a huge boulder on the left side of the stream. I immediately grabbed my camera case, but once they splashed into the stream, the cow saw me, and they quickly jogged up the hillside on the south side of the creek. 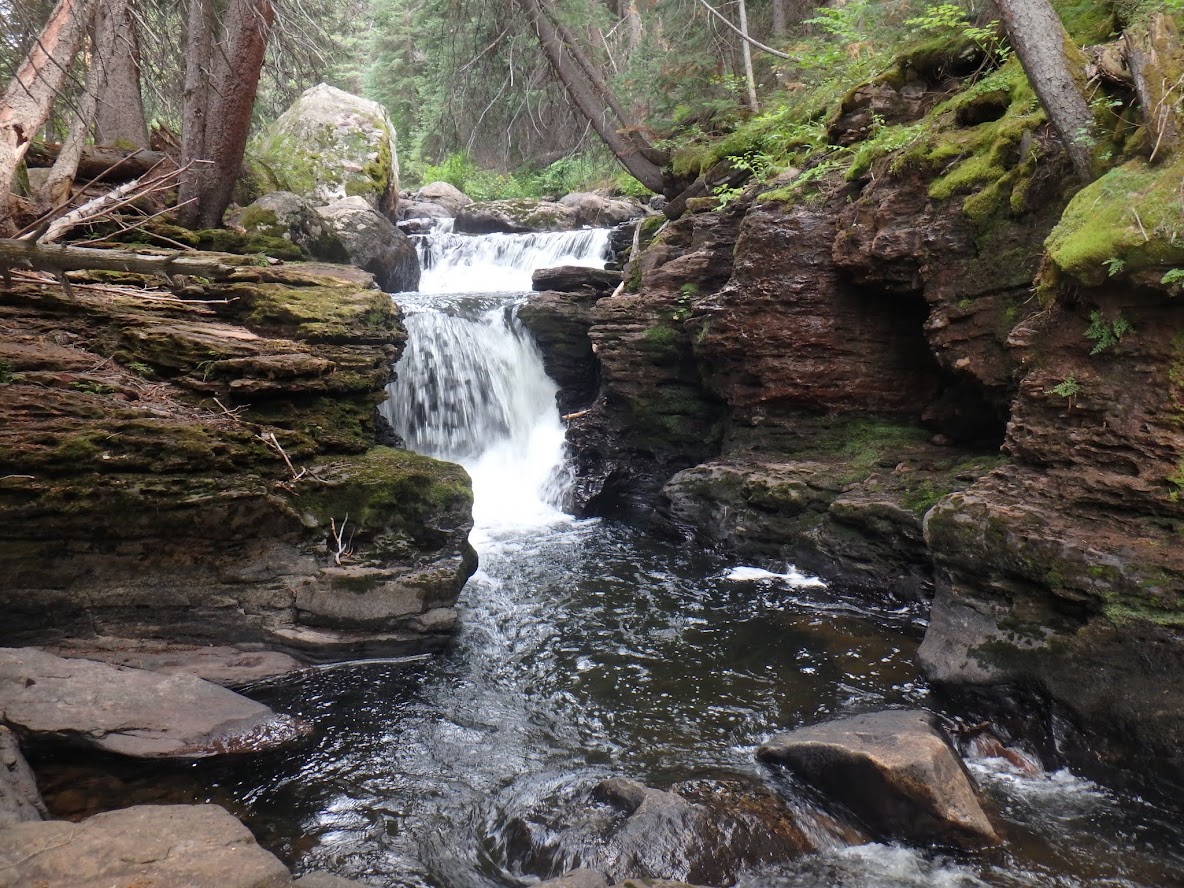 Best Waterfall of the Day

In summary I enjoyed another fine day on Piney River. The lower flows and clear water increased the challenge, but I eventually made the adjustment and downsized to a small caddis and experienced some success. I pretty much had the place to myself, and that is always a positive for me. I discovered that hiking the extra miles from the parking lot pays off in terms of fish numbers, size and diversity. I will keep this in mind, when I make my next excursion to Piney River. 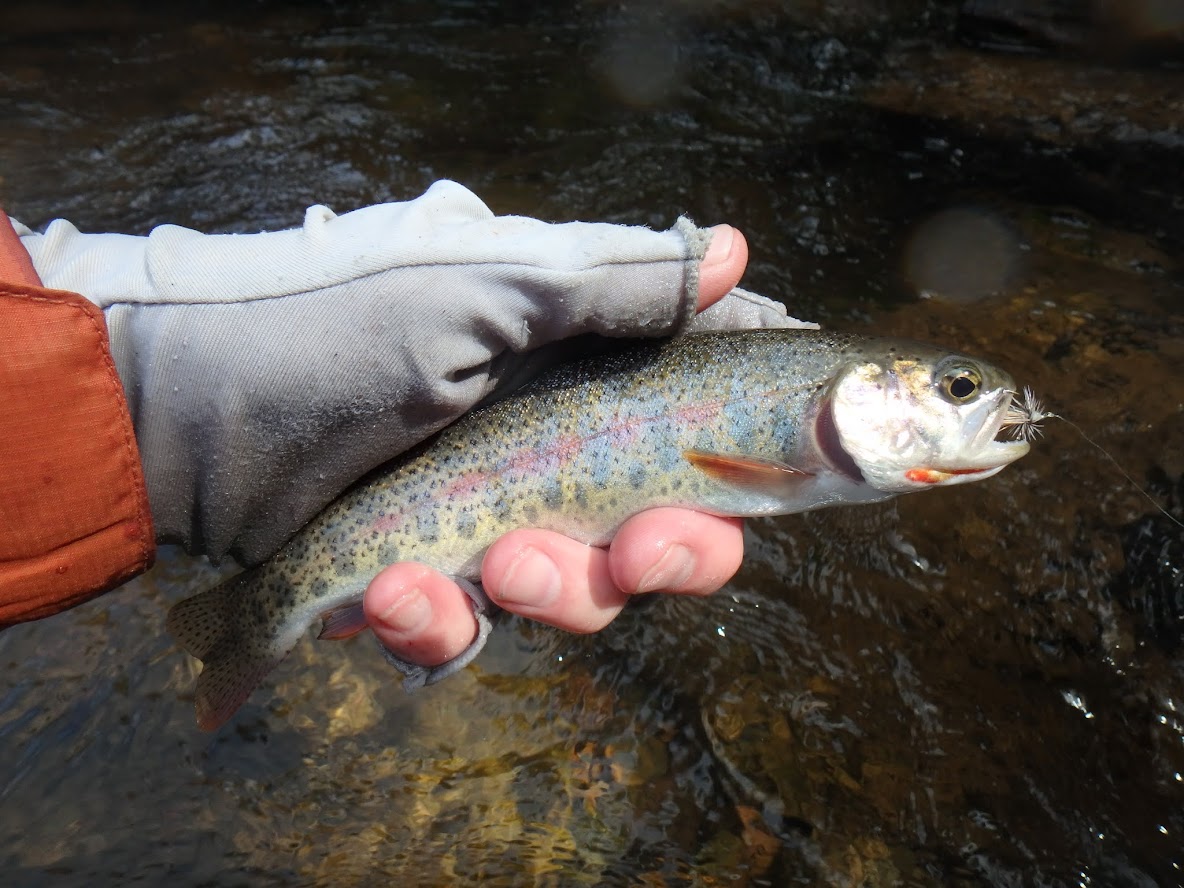 Spectacular Color on This Little Guy