Tuesday afternoon at Pine Valley Ranch was not the celebratory return to fly fishing that I envisioned after my heart surgery, but it felt great to be outdoors in beautiful Colorado, and my casting arm stood up to an initial stress test less that six weeks after surgery. I fulfilled my 11:45AM anticoagulation appointment in Boulder, CO; and then Jane and I headed directly to Pine Valley Ranch. In anticipation of our afternoon adventure we packed the car with lunch, hiking gear, and fishing equipment. The goal of the trip was mainly to introduce Jane to the pretty Jefferson County park and to enjoy lunch in an outdoor setting. The fishing gear was included to test my shoulder and arm. I had very low expectations for the amount of time I would fish, and any amount of success would be deemed a bonus.

It took us a little over an hour to drive from Boulder, CO to the park near Pine Junction, and although quite a few cars were present in the lower lot, we easily found a space. I tugged on my hiking boots and stashed my lunch in my day pack, and we quickly departed in search of a comfortable lunch location that adhered to the social distancing rules. Eventually we found some benches on a fisherman dock on the north side of Pine Lake, and we munched our lunches, while I carefully observed the lake for signs of fish. During a lull in the breeze the lake assumed a smooth appearance, and I noted six or seven riseforms, and I was reassured to learn that trout did in fact exist in Pine Lake. 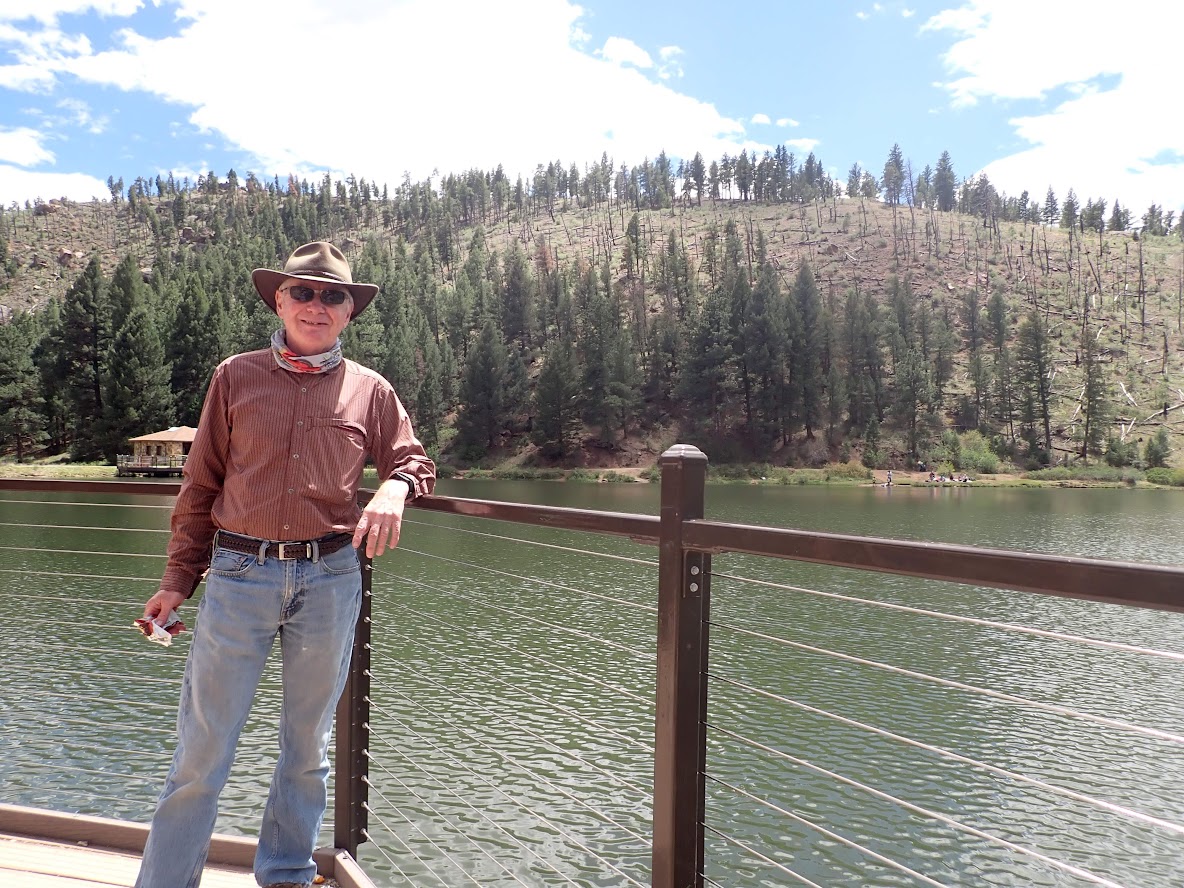 After lunch we returned to the car and then turned on to the Narrow Gauge Trail. We followed the two track gradual grade westward, as it followed the North Fork of the South Platte River to a point .3 mile beyond the boundary of the park. During this hike at a comfortable pace I scouted the river, and although it was high and a bit murky, I concluded that I could find enough slack water to entertain me on my initial foray into fly fishing after heart surgery. 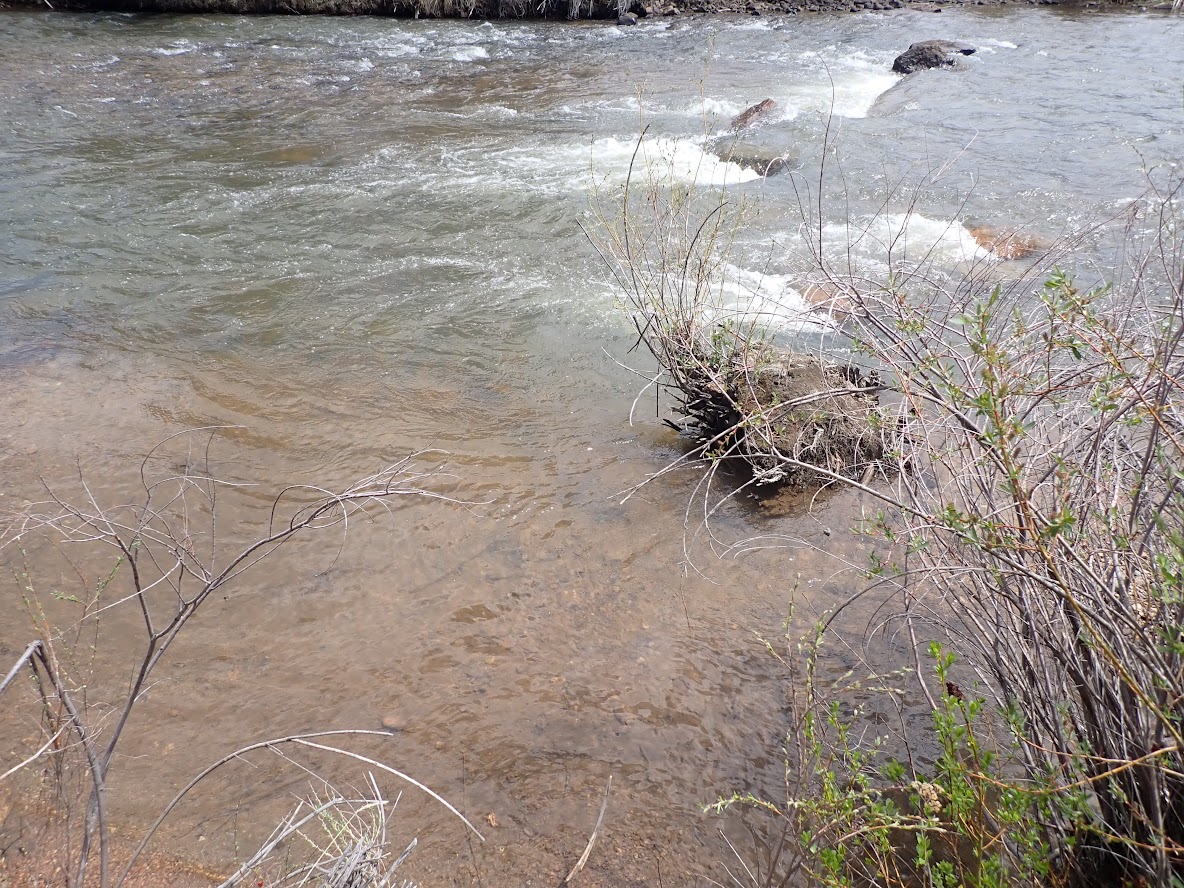 By the time Jane and I reversed course and returned to the parking lot, and I climbed into my waders and fishing gear and then ambled back to my designated spot to fish, it was 3:45. I found an easy access point and progressed upstream along the right side of the river for an hour; but, alas I was unable to identify any proof that trout actually existed in the North Fork of the South Platte River at Pine Valley Ranch. I began with a 20 incher and flesh colored San Juan worm and then cycled through an array of flies, before I called it quits at 4:45. The worm was present throughout this portion of my quest for fish, but the 20 incher was replaced with a beadhead hares ear nymph and orange scud. I also added a second split shot to make sure that I was probing the depths, in case the trout were hugging bottom, while the ice cold snow melt rushed overhead. 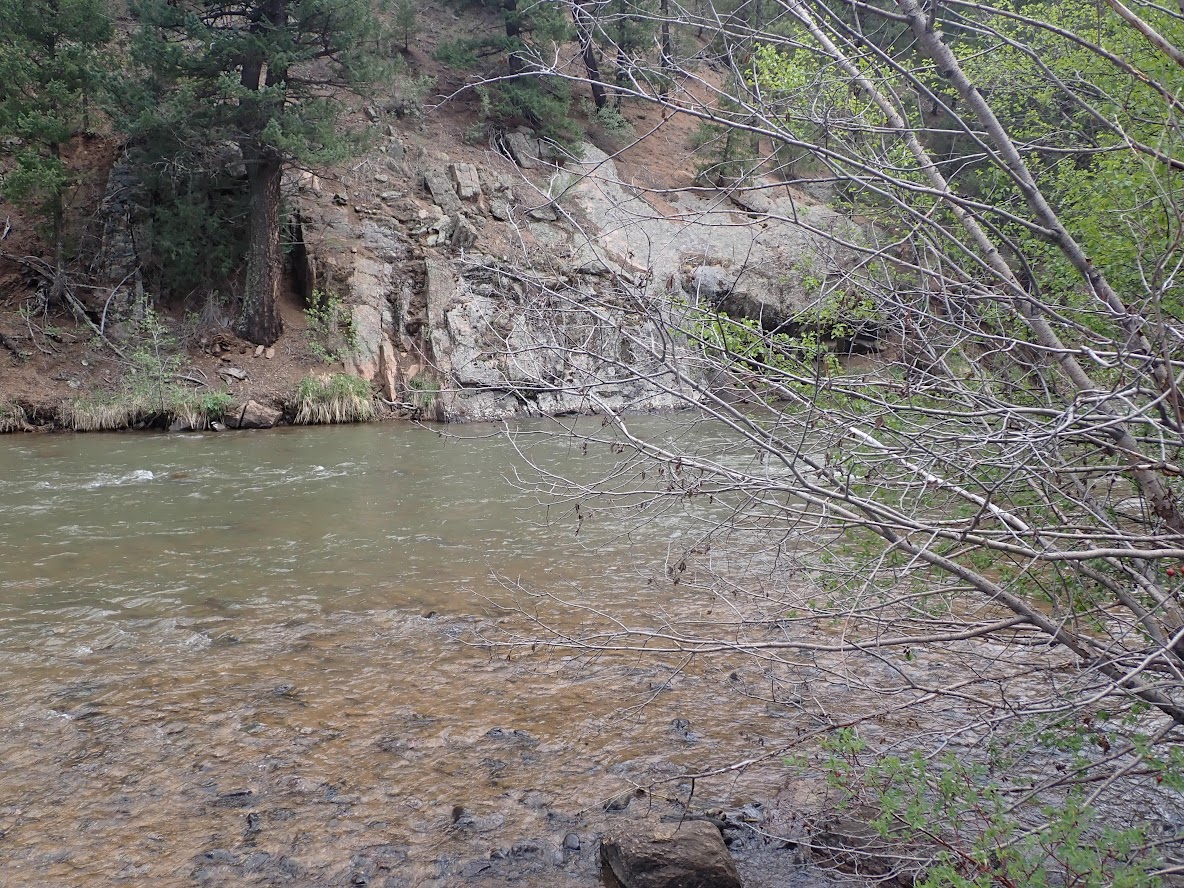 Along the Rock Wall

At 4:45 I hiked back along the Narrow Gauge Trail, until I reached a footbridge that spanned the river. I made a right, and the bridge delivered me to the north side of Pine Lake. I met Jane by the footbridge, so she moved her folding rocking chair to the opening next to the lake, where I began to cast. The surface of the lake was slightly riffled, and this masked surface feeding, so I tossed my indicator rig out a few times. Standing on the bank watching a stationary indicator with no evidence of fish was too boring for this avid angler, so I stripped in the flies and removed the indicator and replaced the flies with a conehead haymaker and go2 caddis pupa. I fanned casts in a semi-circle from my position on the bank and experimented with various strip cadences, but again my efforts were futile. As this was transpiring, I spotted a small fish, as it darted to the surface to nab a small morsel within a few feet of the bank. In a last ditch effort to get on the board on Tuesday, I removed the split shots and two flies and knotted a size 18 black parachute ant to my line. The ant failed to entice the small fish near the bank, and after five unproductive casts I reeled up the fly and moved to the handicapped platform, where Jane and I ate lunch. I observed closely for rises, but the light wind disturbed the surface, so I fired some medium range casts to the area around the platform. I could only tolerate this style of fishing for five or ten minutes, before I stripped my fly in and returned to the parking lot. 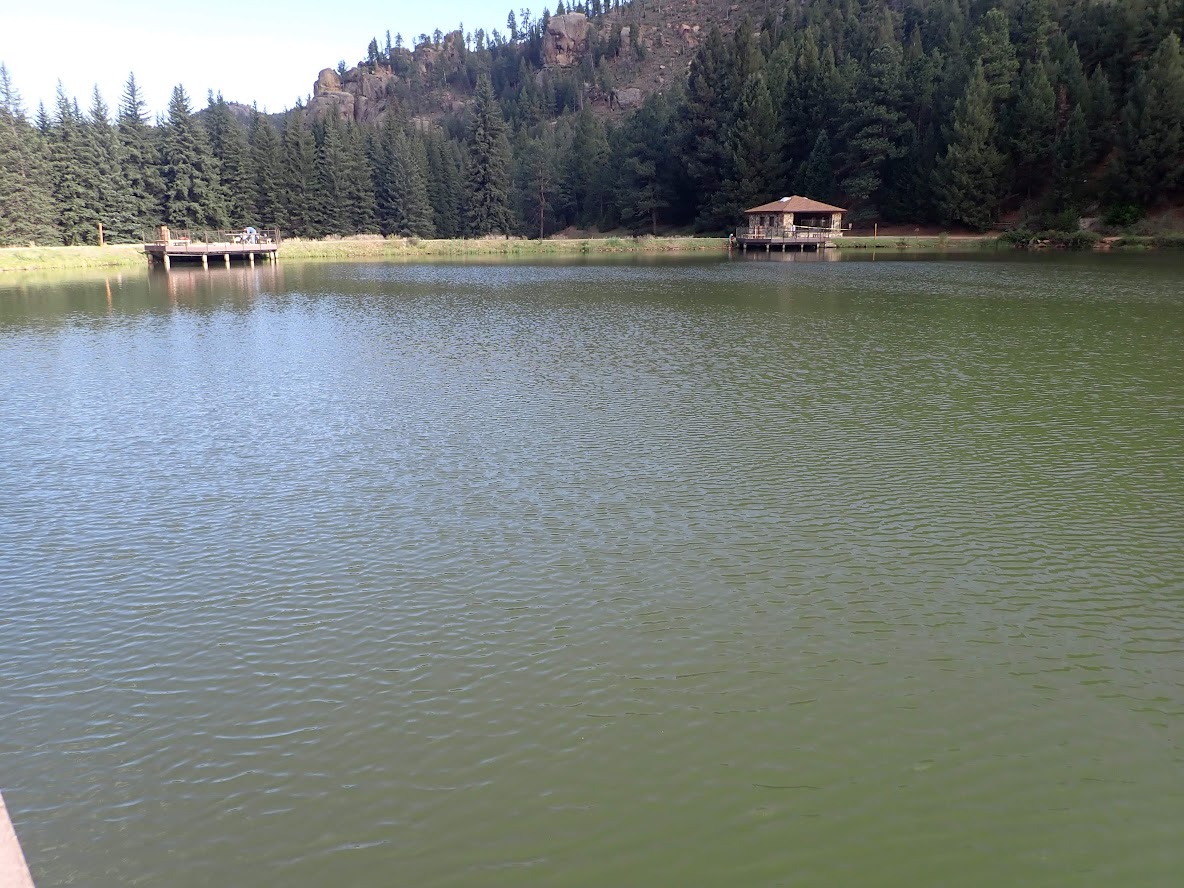 Back to the Lake

Jane and I shared a delightful lunch by a pretty lake in the Colorado foothills, and the three mile hike built my confidence in my improving fitness. I was reassured to be able to cast in the river and lake for 1.5 hours, and this was probably the most significant take away from Tuesday afternoon. Getting skunked was a disappointment, but my expectations were low. I’m already considering some additional Front Range lakes for future fishing outings. 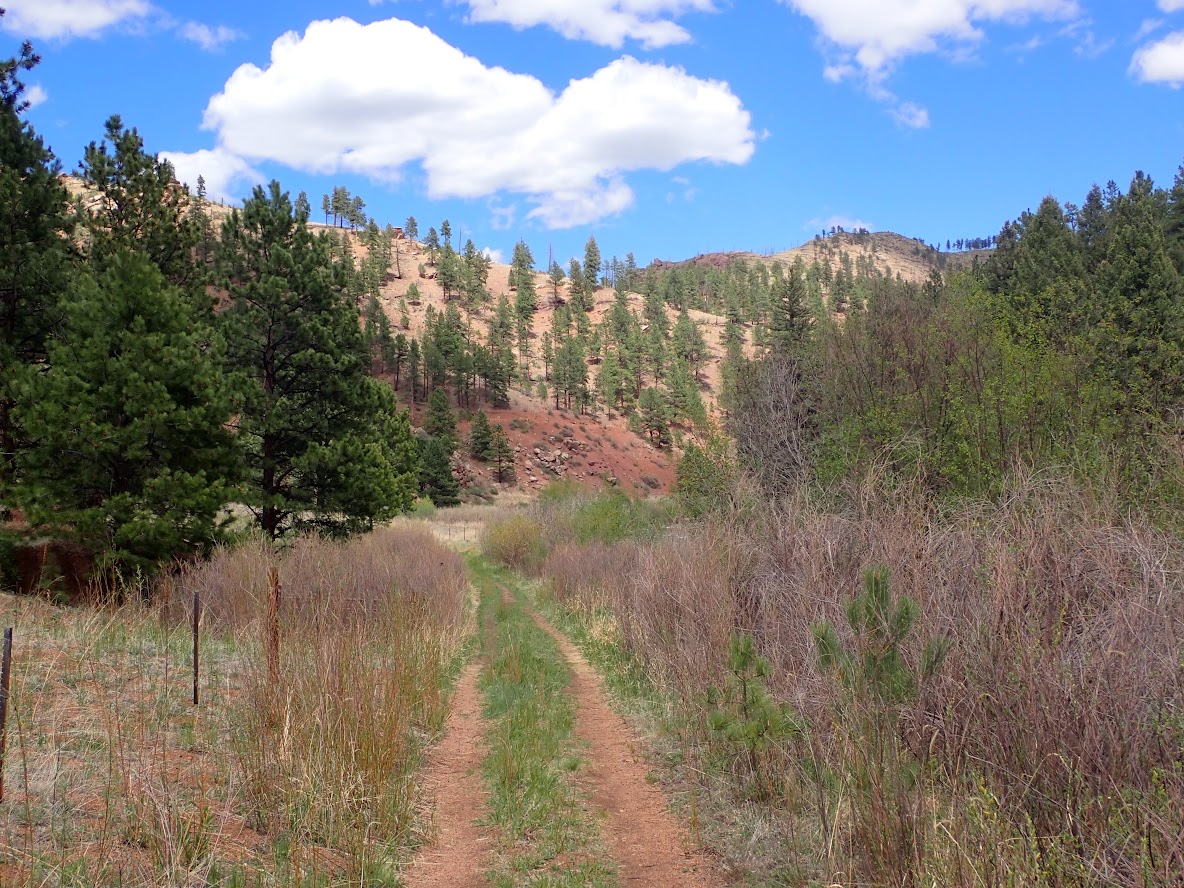