Tuesday was a day of work for Marcia so I used it as an opportunity to fish the NW Branch of the Perkiomen Creek at Forgedale only five or six miles from the Yost house. I ate a light breakfast, rounded up the dogs, and gave them a treat for their good behavior and left the house by 9:30AM. By the time I drove to Forgedale and climbed into my waders and strung my rod I began fishing at 10AM. It was another pleasant day with highs forecast to reach only the seventies again.

I began fishing in some private water just below the Forgedale Park but I was only guilty of trespassing for twenty yards or so. I tied on a Chernobyl ant with a beadhead hares ear dangling from the bend. I experienced a couple refusals so I switched the Chernobyl for a yellow Letort hopper. Suddenly as I flicked an underhand cast to the middle of the tail of a nice pool beneath some large overhanging branches a twelve inch brown smashed the hopper. I photographed this fish and moved on up to the stretch next to the small park which is actually simply mowed grass between the stream and the road below a large iron bridge. 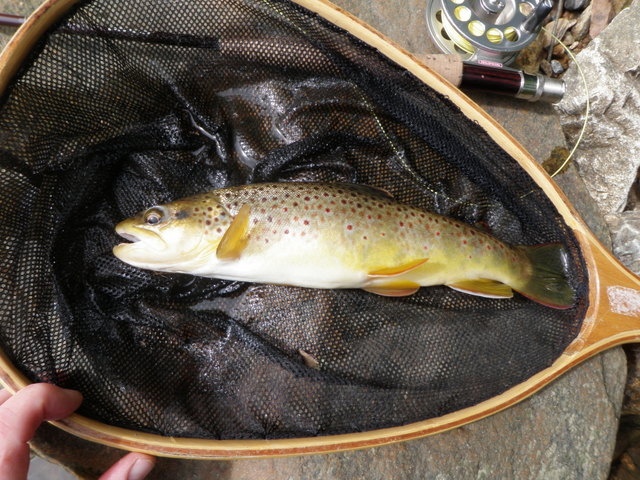 I wasn’t getting much action on the BHHE so I exchanged that for a beadhead pheasant tail as I feel that better imitates the nymph of the sulfurs, and I know they are present in large numbers on this stream. I began catching small browns with increasing frequency over the next couple hours as I worked upstream to a point just opposite the state game lands parking lot where I had parked. All the fish snatched the BHPT and they were in the 7-9 inch range. It was a challenge to cast with my nine foot rod while avoiding the canopy that reached out over the stream and I lost quite a few flies in the process. I also experienced a larger than normal long distance release ratio on fish that darted out and grabbed the pheasant tail but shed the hook before I could land in my net. 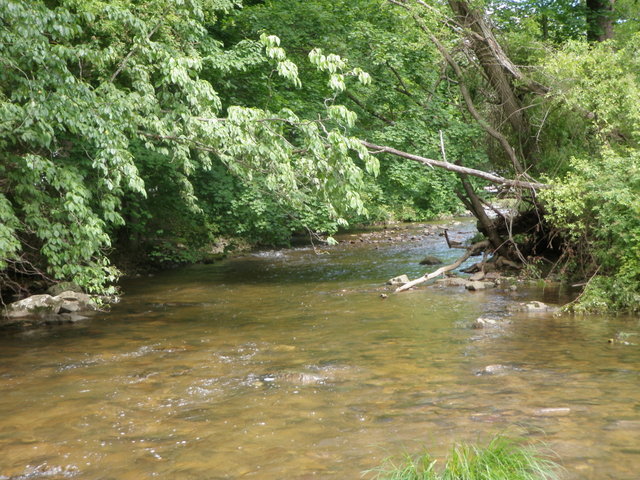 Nice and Clear on Tuesday

I needed to check in with Southwest Airlines at 1:25PM so at around 1:00PM I climbed up the bank and returned to the car to use my iPhone to get A54 as my boarding number. I drove to the Barto Hotel parking lot to obtain a better cell phone signal, and as I did so apparently passed my brother. My brother, Jim, and I had agreed to meet at the game lands parking lot so after securing my boarding number I gave him a call. We met in the Forgedale parking lot and decided to forego more fishing and returned to Marcia’s house where we hung out until Marcia and Greg returned home from work.

That evening I treated Jim, Marcia, Greg and my nieces Erin and Kyra to dinner at Union Jacks. My final day in Pennsylvania was a lot of fun.