Despite the fact that Steve and I were not committed to wake up early to meet an appointment as was the caseTuesday morning, we both awoke at 6PM to the sound of barking dogs. Given the number of guests sharing one bathroom, rising ahead of the crowd was probably a good thing. The same two gentlemen from Ft. Collins that stayed at Red Butte Ranch a year ago were present again, and four additional fishermen rented the family cabin, so Ruth had a full house for breakfast. We savored our egg, ham, hashed browns, nut bread and yogurt and washed it down with tea and water.

Steve and I allowed the fishermen scheduled for a float trip to clear out, and then we gathered our things and paid our bill and departed. Originally we planned to fish near the Red Butte Ranch before the flush arrived, but the four fishermen staying in the cabin were already waded in the river and staked out their spots so we changed our plans and drove to the tailwater below the dam. We stopped briefly at the Grey Reef Fly Shop across from the afterbay, and we each purchased a few flies. I bought three pine squirrel leeches since they were productive on Tuesday, and I hadn’t tied any. 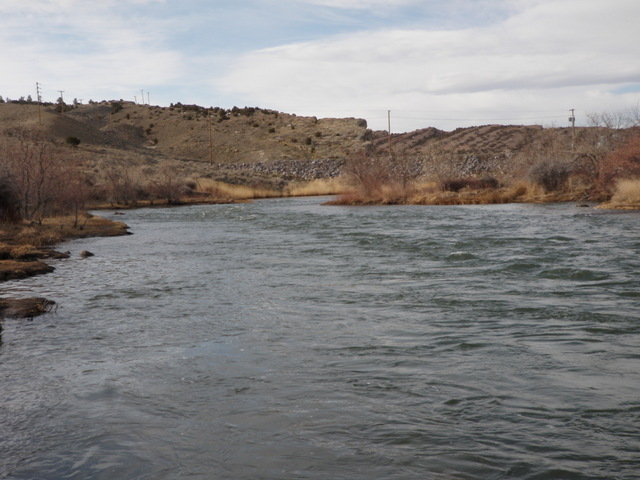 The temperature was amazingly 44 degrees at 9AM on Wednesday, so that was a pleasant surprise; however, the wind was a significant factor and swept across the relatively flat terrain unrelentingly. Only a couple fishermen were wade fishing between the boat ramp and the flume shooting from the dam, so Steve and I pretty much had our choice of water, and we decided to once again cross the dam on the footpath similar to Monday and fish back along the south side of the river. When we reached the far side we realized the flow was still fairly high, probably in the 1000 cfs range. 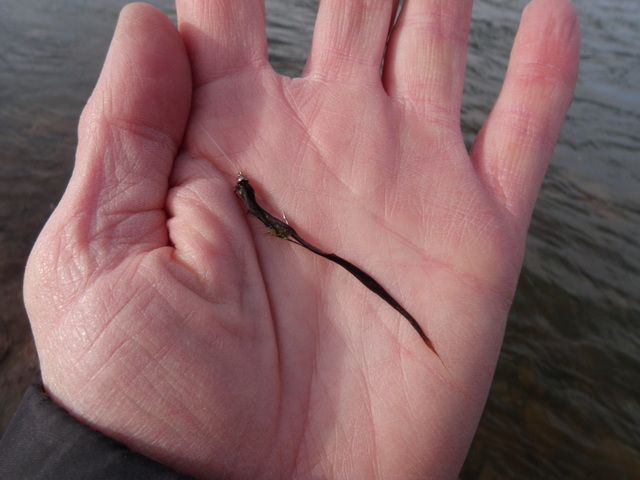 Both of us kept our rods rigged in the same manner that Greg set us up, and we began fishing with the egg/red annelid worm combination on top and a pine squirrel leech on the bottom. Steve elected to begin where the river branched off from the main current and curled around the point of a long narrow island while I walked down the river a bit and began near the bottom of the island. Because the flow was strong at 9AM compared to Monday, I added a second split shot to my line. Much to my amazement I hooked and landed a thirteen inch rainbow fairly early, but then I fished through a 45 minute period with no action. I continued to slice 2X line through the currents, and this came in handy when I snagged my flies on a fairly frequent basis. 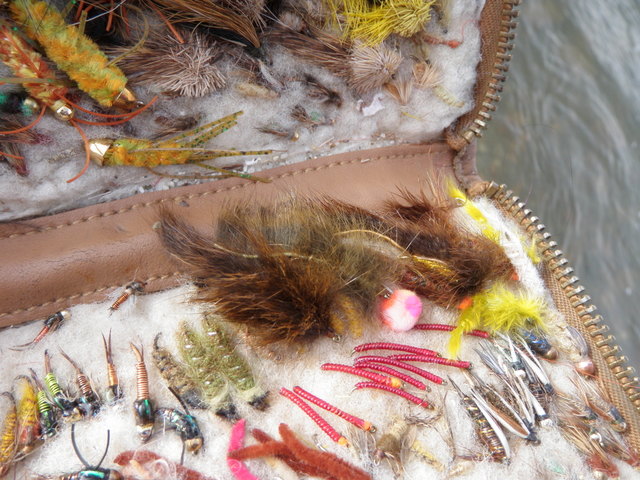 Fuzzy Flies in the Center Are Pine Squirrel Leeches When Dry

By 10 o’clock I approached some faster water near the top of where the left channel curled around the island, and the flows had dropped noticeably. Since I had two split shot on my line I decided to drift my flies through some of the faster current toward the center of the run instead of working the  inside seam and slower water that bordered it. Much to my surprise, I hooked and landed three fine rainbows from the faster run of moderate depth including a 17 inch silvery rainbow that sported a broken off woolly worm-style fly in its lip. I took a photo and removed my annelid worm and the broken off fly from the rainbow’s lip. 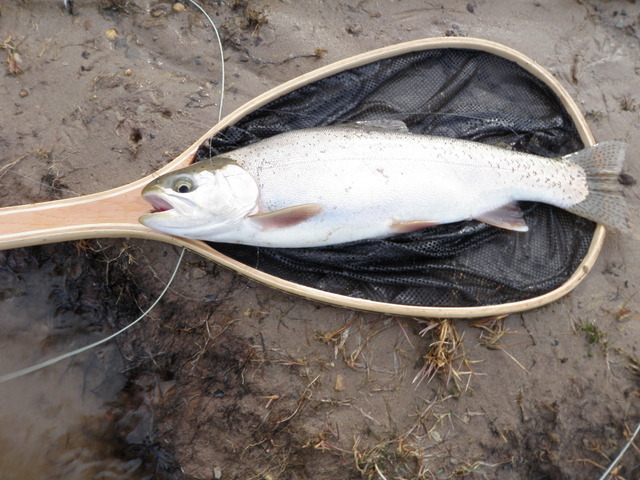 Stretched Out to 17 Inches

When I reached the top of the island, I circled back to the area across from the boat ramp. This water looked very attractive, but between 2013 and Monday, I had yet to extract any fish. Finally along the current seam I managed to hook and land a small (by Grey Reef standards) rainbow of thirteen inches.

Next I moved back upstream to a section between the boat ramp and the bottom of the island. By now the level of the river had returned to normal flow for the end of March of around 500 cfs and the river structure was much easier to discern. I was at the bottom of a pair of nice pools that stretched for 30 feet below some current breaks, so I began casting upstream to the slack water and allowed my flies to drift back toward me along the current seams at the margins. By using this approach I landed two more nice rainbows including a colorful 15 inch specimen. One of these fish attacked the leech as I imparted some movement by twitching it at the tail of the drift. 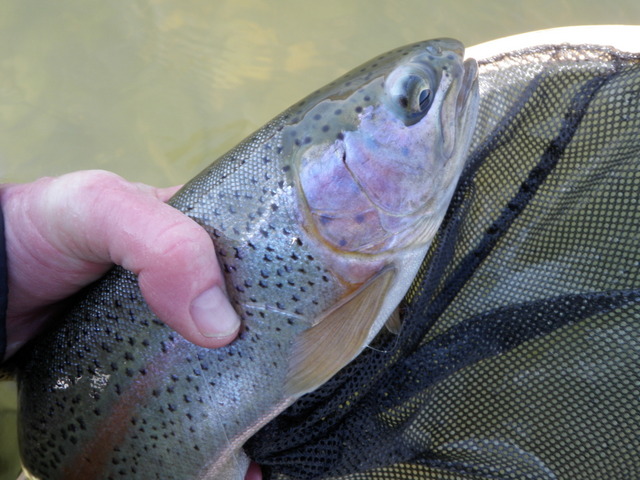 Close Up of Another Nice Rainbow Landed on Wednesday

Steve decided to cross back to the side of the river near the parking lot, so I moved upstream to a long wide riffle stretch just below the island and fished it thoroughly while Steve crossed over at the dam. I didn’t have any luck in the riffle so I reeled up and attached my flies to a rod guide and hiked back across the dam to the other side of the river to join Steve. We worked some nice areas for another half hour or so, but by noon we had run out of interesting water, so we decided to explore some access points downstream that we’d observed on our float trip the previous day.

We continued down the dirt road that led to the Grey Reef access for another three or four miles and stopped and checked out Pete’s Draw and The Redds. Pete’s Draw looked enticing on the opposite side of the main river current, but we didn’t feel we could effectively fish it from our wading positions, so we returned to The Redds. We were in the process of preparing to experiment with a nice run at The Redds, but I ran into some equipment problems, so we decided to call it quits and make the four hour return trip to Denver.

Wednesday morning yielded some decent fishing, and we got to experience the higher flows and then the rapid decline and the adjustments that this type of rapid change in water level requires. We now face the prospect of fishing Colorado rivers and in all likelihood catching smaller fish on average, but I know from past experience that it is really the enjoyment of being on the river and the challenge of fooling fish regardless of size that keeps me coming back.