Well how did the the 2014 float trip on the North Platte River compare to the fishing that we experienced a year prior? If you read the header information of this post, you already know the answer to that question.

The “flush” and 2X are really the storylines of this outstanding day of fishing on the North Platte at Grey Reef. The flush is a process whereby the Bureau of Reclamation and Wyoming Game and Fish ramp up the flows from Grey Reef dam for five days during late March. The process begins at midnight and ends by 10AM as the outflow from the dam begins at 500 cfs and increases to a peak of 4000 cfs and then declines back to 500. The purpose is to remove fine sediment from the gravel spawning beds used by the river’s trout, and judging from the fishing experience in 2013 and 2014, this event is yielding outstanding results.

Our day of guided float fishing, Tuesday March 25, coincided with the next to last day of the flush. We learned in 2013 that this has minimal negative impact on the fishing since the local guides know how to work around it, and in fact it may improve fishing as the high flows dislodge annelid worms, leeches, and eggs from the stream bottom and vegetation.

Steve and I arose at 6AM on Tuesday morning, and this allowed plenty of time to have a nice breakfast at the Hampton Inn and then gather our essentials for a day of fishing. We drove to the Red Butte Ranch where we met Greg Mueller, our guide. We each gave Greg the rods and reels we planned to use for the day, and he rigged them in the preferred Grey Reef manner while Steve and I adjourned to the garage and climbed into our frozen waders and wading boots. Once again I broke out handwarmers and toe warmers as I availed myself of every possible ploy to remain reasonably comfortable in the cold temperatures of early spring in Wyoming. The high was forecast to reach the low fifties, but the morning period before the sun rose high in the sky was my concern. 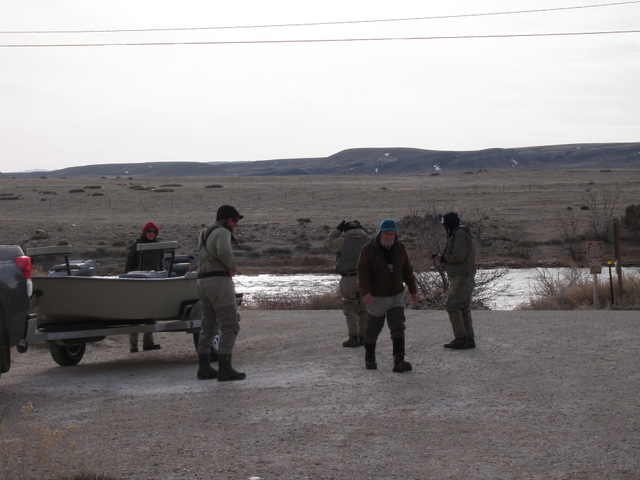 We jumped in Greg’s truck and made the brief trip to the Grey Reef boat launch, and I couldn’t help noticing that the air temperature was hovering at 23 degrees at 8:30 in the morning. Was the weather forecast accurate? Quite a few fishermen, guides and drift boats arrived at the boat ramp simultaneously, but Greg jumped in quickly, and we took off slightly ahead of the others. Steve graciously allowed me the position in the bow while he took his seat in the rear, and we pushed off. Greg had me set up with two separate yellow-green eggs paired a couple inches above an annelid worm fly along with a single split shot and a red and white thingamabobber near the junction with the fly line. Steve had a similar set up, but instead of two egg and worm combinations, he had a pine squirrel leech as his bottom fly. 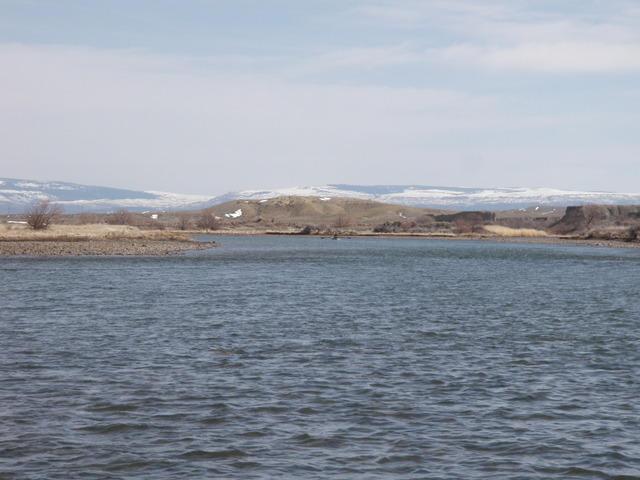 Wide Section with Snow Covered Peaks in the Background

It didn’t take long before my indicator dipped and I set the hook and felt the throbbing weight of a nice fish. As I cautiously played the fish in a manner similar to my custom in Colorado, Greg announced that we were using 2X tippet on all the connections, and pointedly suggested that I should “reef the fish in quickly”. He was right as the combination of the Scott six weight rod and 2X line made it virtually impossible for the rainbows to break off. Amazingly the abundant population of rainbow trout in the North Platte River below Grey Reef demonstrate virtually no fear of fishing line. 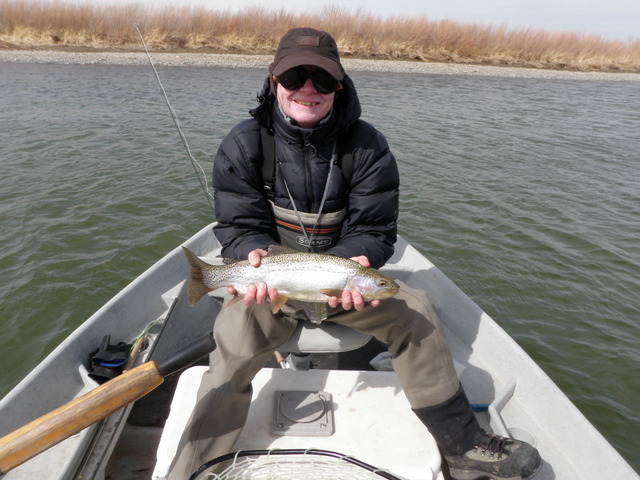 Dave Displays His Nicest Catch of the Day, an Eighteen Inch Rainbow

The rest of the day continued pretty much in the manner I just described. Very little time transpired between hook ups, and Steve and I landed 30 plus fish each between 9AM and 4:30PM when we pulled up on shore at the Lusby take out. Of course each of us experienced 3-5 foul hooked fish and perhaps five additional momentary hook ups in the span of eight hours of fishing. Part way through the morning, Steve began to catch fish on his pine squirrel leech, so Greg removed my bottom egg/worm combination and replaced them with a dark colored leech. The leech became equally as productive as the eggs toward the middle of the day, but the egg seemed to outperform in the early morning and late afternoon. 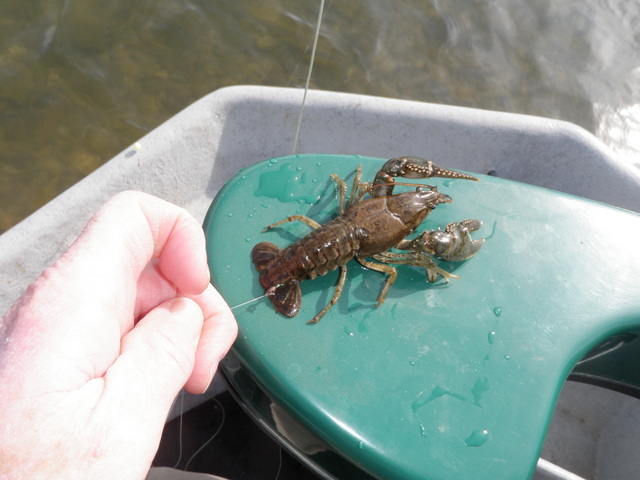 A Crayfish I Landed on a Midge

There was also a period during the late morning when Greg added a small bionic midge as a third fly to my setup, but the only midge success I can report is a four inch crayfish that latched onto the tiny fly. All my trout were rainbows except for a small thirteen inch brown that I landed quite early in the float. The size of the rainbows ranged between thirteen and eighteen inches, and I managed to land two or three in the upper end of that range. 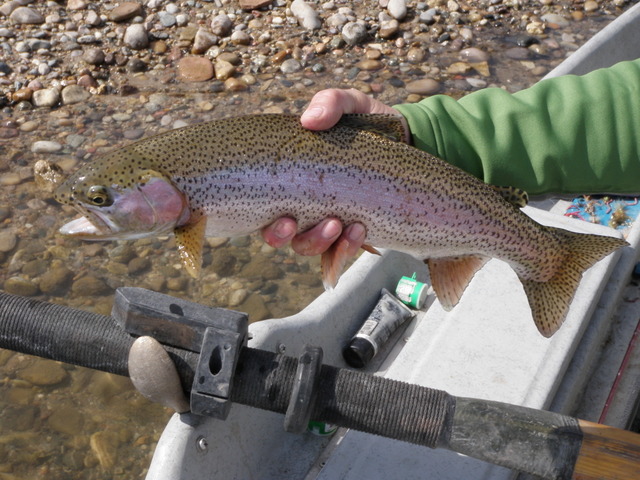 In my opinion the fishing on March 25 was just as outstanding as our previous float trip a year earlier. Catching thirty rainbow trout averaging 14 to 15 inches in eight hours is a superlative experience that I won’t soon forget, and in fact my major concern is that I’m spoiled for Colorado fishing just as the season kicks off. What a way to start the 2014 season with an action packed day on the North Platte River! The weather also played a part in our enjoyment as the sun warmed the air quickly and the high temperature actually reached 60 degrees late in the afternoon. Three cheers for the flush and 2X.