At roughly the same time a year ago my friend Steve and I completed a fishing trip to the North Platte River below Grey Reef dam, and we had a great experience, so we decided to return for an encore. We were both amazed by the quantities and size of fish we were able to land in this tailwater fishery four hours away from Denver, CO. Steve took care of the booking details and arranged for a full day guided float on March 25 with the same guide that we used in 2013. We also attempted to book lodging at the Red Butte Ranch similar to our previous trip, but that didn’t work out exactly as planned. The main question in our minds was whether the fishery was as excellent as our 2013 trip indicated, or was it just an aberration caused by some confluence of factors?

The parallels between 2014 and 2013 were uncanny. Once again we planned to leave on Monday morning and drive to Casper, buy our fishing licenses and supplies, check in to the bed and breakfast, and then visit the tailwater and wade fish for a few hours. Our guided float trip was once again scheduled for Tuesday, and then we expected to wade fish on Wednesday into the early afternoon before packing everything up and returning to Denver. This mirrored our previous trip, but more eerie was the developing weather pattern. In 2013 a storm dumped snow in Wyoming on Saturday and that was followed by a cold snap of a couple days with gradually warming temperatures on Tuesday and Wednesday. The weather forecast for 2014 matched this almost degree by degree.

Steve arrived at 8:15AM on Monday, and I was all set with my bags packed so we loaded the car and departed. There was some fresh snow on the highway between Ft. Collins and Cheyenne with signs warning of icy patches, so Steve was extra cautious as we traveled through this area. We stopped in Casper for a quick lunch and arrived at the North Platte Fly Shop by approximately 1PM. Steve and I each purchased non-resident Wyoming three day fishing licenses and continued on our way to the Red Butte Ranch bed and breakfast. Unfortunately upon our arrival we learned from the owner, Ruth, that she had overbooked and there weren’t any beds for us on Monday night! We still had the New Zealand room for Tuesday, but needed new accommodations for Monday night.

Ruth put us in touch with Liz, and owner of the guide service, and Liz reserved a room for us at the Hampton Inn in Casper. This added another 15 miles or so to our trips to and from the river, but it worked out to be a nice back up plan. Once this small snafu was resolved Steve and I jumped in the car and drove to the Grey Reef access area below the dam to do some wade fishing and introduce ourselves to the North Platte River in 2014. The thermometer in Steve’s Subaru registered 39 degrees as we drove along the wide two lane highway, and I was apprehensive about my ability to keep my hands in a tolerable condition to handle a fly rod. 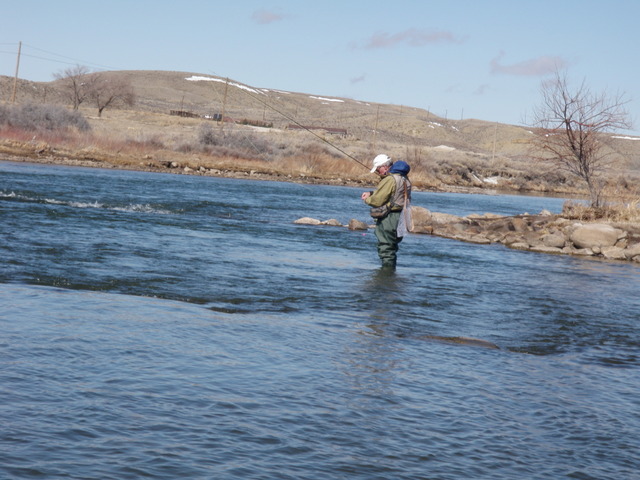 When we arrived at the parking lot we bundled up, and I resorted to toe warmers and hand warmers as I slid into my waders and pulled on my New Zealand hat with ear flaps, and my warmest down parka barely squeezed under my waders. We elected to cross the dam using the footpath and then hiked down along the opposite shore to the area across from the boat ramp. I began with an apricot egg fly and below that offered a red annelid worm with a neon orange thread head. This combination didn’t produce any action, although I was able to avoid getting my hands wet and thus the uncomfortable bone chilling cold that comes along with that experience.

Eventually I removed the annelid worm fly and replaced it with a chocolate brown chenille San Juan worm as this fly produced several fish during my wade fishing in 2013. The chocolate worm did in fact produce a fish, but it turned out to be foul hooked, so I had to get my hands wet under the most unfavorable circumstances; releasing a fish that didn’t count.

I failed to bend down the barb on my egg fly and as I released the foul hooked rainbow, the egg fly got stuck in my net. After much twisting and pressure on the egg, I was able to free it, but the hook now penetrated only the bottom one fourth of the soft sphere. I thought about switching out the egg fly for another newly tied model, but given the cold conditions, I decided to gamble with the cripple. Sure enough I moved up to a wide riffle stretch of moderate depth, and the indicator paused, and I set the hook and felt a pulsing weight on the other end. The euphoria of a live fish only lasted for a moment, and then the fish popped free. I reeled in my flies to inspect, and it should be no surprise what I saw; the fish apparently bit the egg and pulled it off the hook! 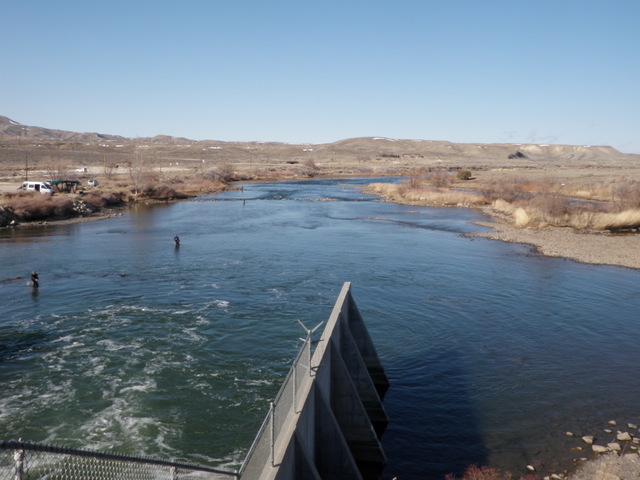 A View Downstream from the Footpath Across the Dam

Steve and I continued working up the left bank with minimal success, and then we crossed to the side next to the parking lot and found some nice water below a cluster of fishermen pounding the flume where the water pours from the base of the dam. At some point during this interim time I snagged my flies on a rock or stick and broke them both off, so I tied on another apricot egg fly and returned to the red annelid worm. I positioned myself in a nice spot where the main current spilled over some large rocks and created a nice deep tail out, and here I began drifting my two fly combination. Unfortunately there was some sort of snag eight feet below the head of the run that kept grabbing my flies on every other drift, but when the indicator dipped on the third pass I set the hook anyway and felt something throbbing like a live fish. Sure enough I got a glimpse of a rainbow, but just after seeing the fish, the rod stopped throbbing and I was once again attached to a non-living underwater obstacle.

I worked my flies free and moved down a bit so I could fish the bottom of the run and avoid the annoying snag.  This proved to be my best move of the day, and on the fourth or fifth drift I felt some weight and set the hook and began to battle a strong rainbow. Eventually I subdued my combatant by sliding my net underneath the bright rainbow. Since this fish was my first landed fish of the trip and roughly 17 inches in length, I couldn’t resist taking a photo and in the process submerged my left hand in the icy currents of the North Platte. After snapping three shots, I released the rainbow and thrust my hands in the wader bib pocket and clenched the hand warmers for ten minutes. 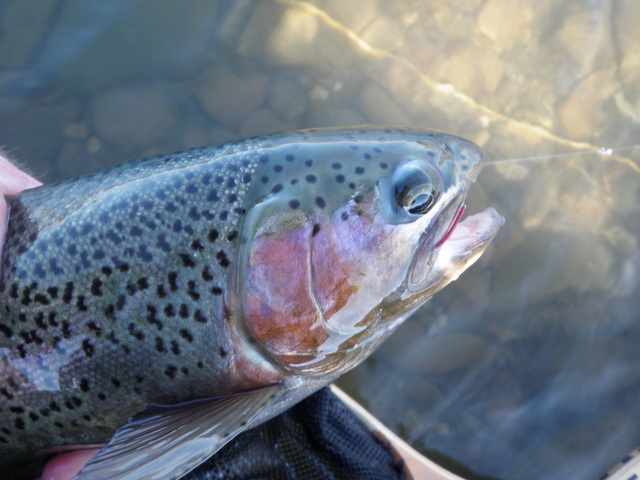 Once my hands arrived at a barely tolerable state again, I resumed fishing and had one more momentary hook up, but Steve wasn’t having much success either and the sun was sinking in the western sky, so we decided to adjourn to the Hampton Inn and dinner in Casper. The woman at the front desk checked us in and then recommended a restaurant called Poor Boys a couple blocks away. We took her advice and enjoyed a pleasant dinner before returning to the warmth of our hotel room.

Despite the frigid temperatures we managed to land a few fish and tested out the flies we diligently tied in preparation for our Wyoming trip. The weather forecast predicted highs in the low 50’s for Tuesday, so we anxiously anticipated our full day float. Would we have as much success as we did in 2013? Stay tuned.