Fremon Canyon. Steve and I visited this short section of the North Platte River between Pathfinder and Alcova on 03/27/2013, and we experienced no success; but various sources suggested that water clarity was excellent and large fish were present in 2019. Fremont Canyon was our original destination on Sunday upon our arrival in central Wyoming, but when we cruised along the upper and most accessible half mile, the parking lot was overflowing, and fishermen dominated all the available water.

Our original plan included a trip to the Miracle Mile above Pathfinder on Tuesday, March 26, but this option necessitated a two hour drive over a muddy dirt road, and the weather reports highlighted wind velocities in excess of twenty miles per hour. This combination of adverse factors caused us to visit the much closer Fremont Canyon stretch, and we banked on Tuesday being less crowded than Sunday. 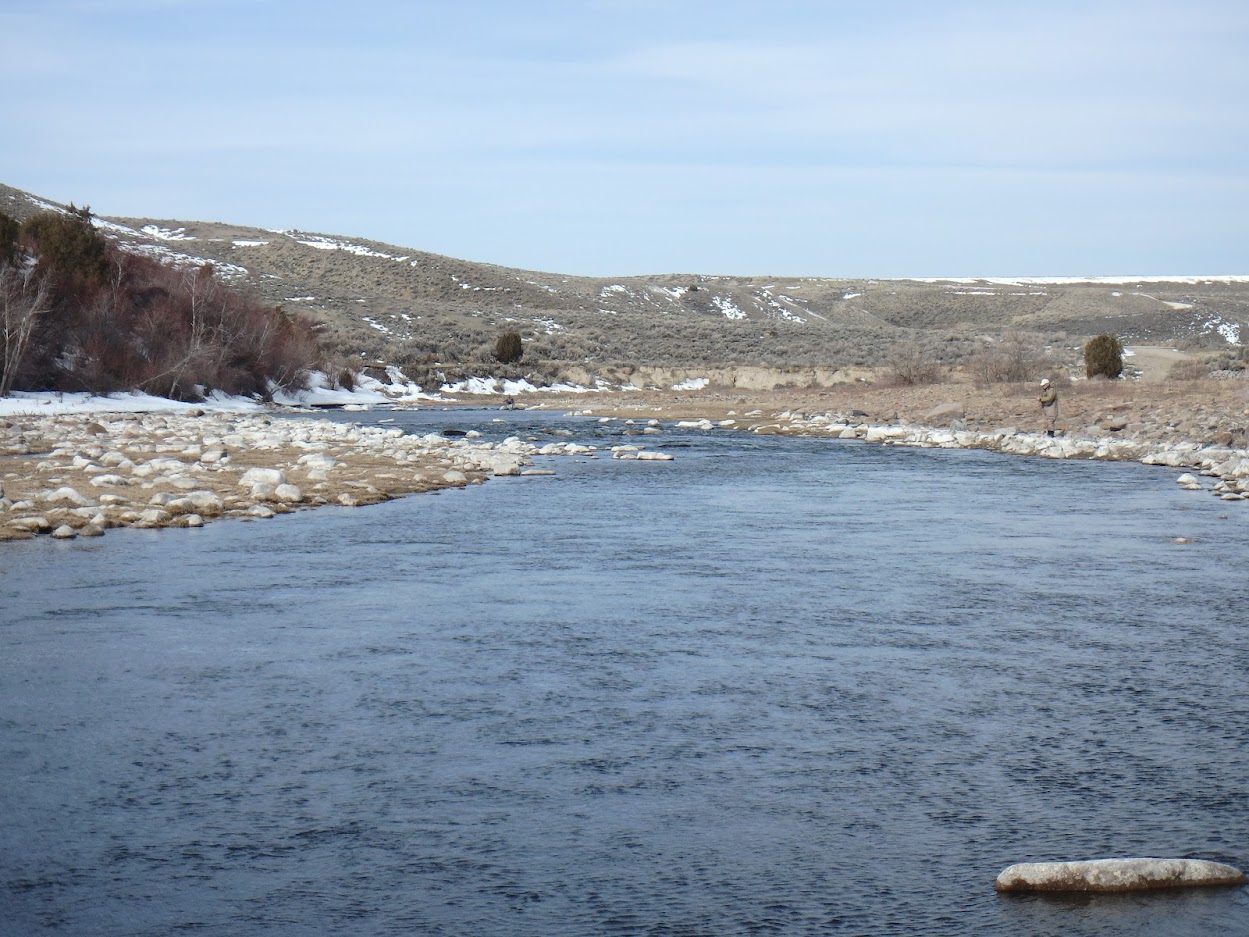 Steve at the Top of the Pool and Run

We were not surprised by the harsh assault on our senses, when we stepped out of the car at the large parking area high above the river and below the bridge that spans the North Platte on the road that leads to the Miracle Mile. The wind blasted our bodies, and the temperature hovered in the low forties. The weather forecast suggested high temperatures of sixty degrees, but this seemed like wishful thinking upon our arrival. Two other vehicles were in the parking lot, so Steve and I hustled to pull on our waders and an endless array of additional layers to combat the Wyoming spring chill. The wind would be a constant nuisance during our time on the water, but the presence of the sun did elevate the temperature to the upper forties before we left.

Our rods remained rigged with eggs and worms from our float on Monday; so once our layers, sunscreen and hats were in place, we descended a relatively steep angled path to the river. The flows seemed low as a result of the extremely wide streambed populated by an abundant quantity of exposed rocks. but once we approached the bank of the river, we noticed that the velocity and depth were greater than anticipated from a distance. 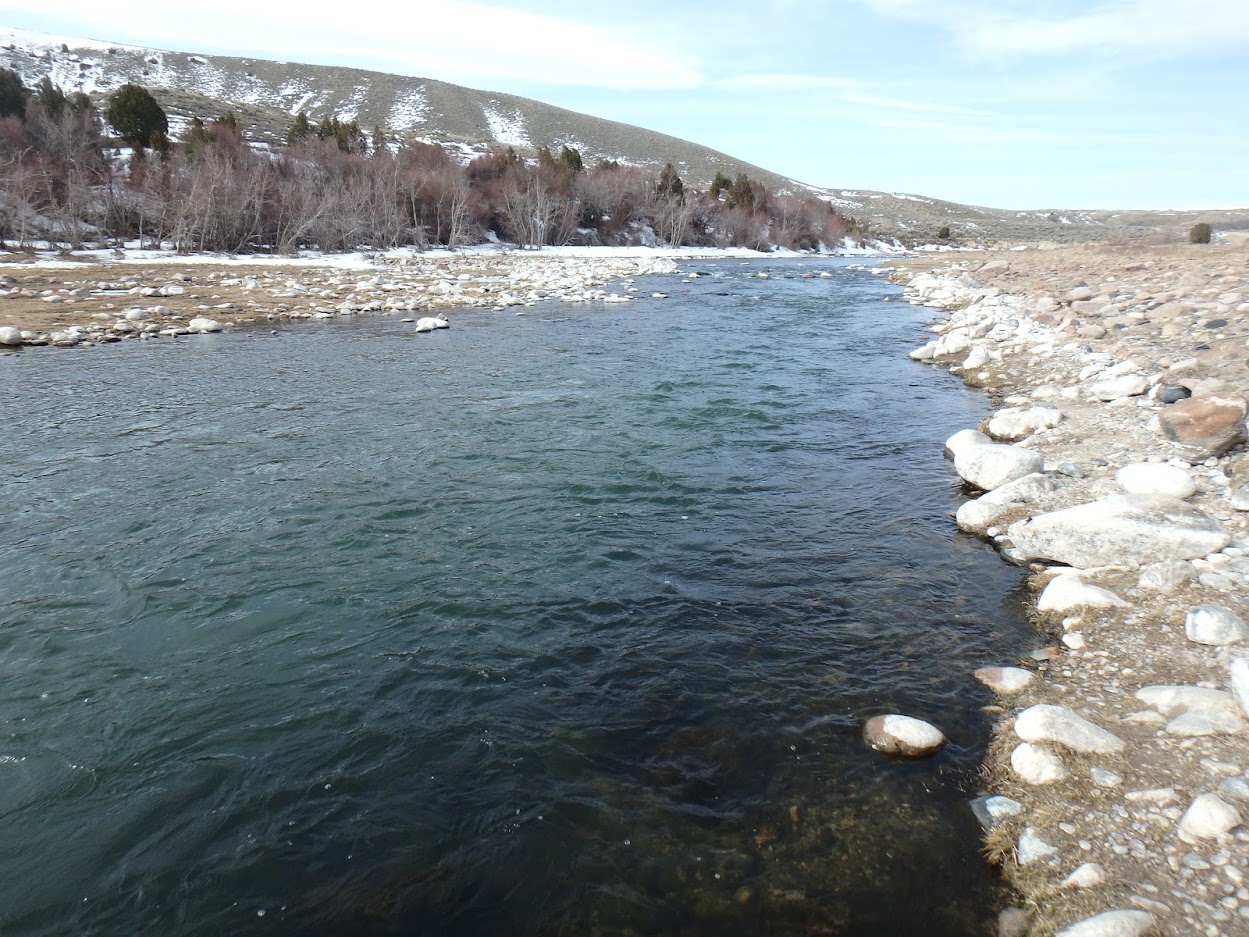 One of the fishermen in the parking lot occupied the large wide pool below the bridge, so Steve and I migrated toward a relatively long narrow run and pool below him. Another group of fishermen were visible fifty yards downstream from the section that we claimed. Our area was approximately thirty yards long, and the main current tumbled from the top of the section and then raced within five to ten feet of the north bank. The opposite side appeared to be more attractive with a wider shelf pool, so I requested Steve’s permission to cross at the tail. He approved of my plan, since he left his wading staff in the car. 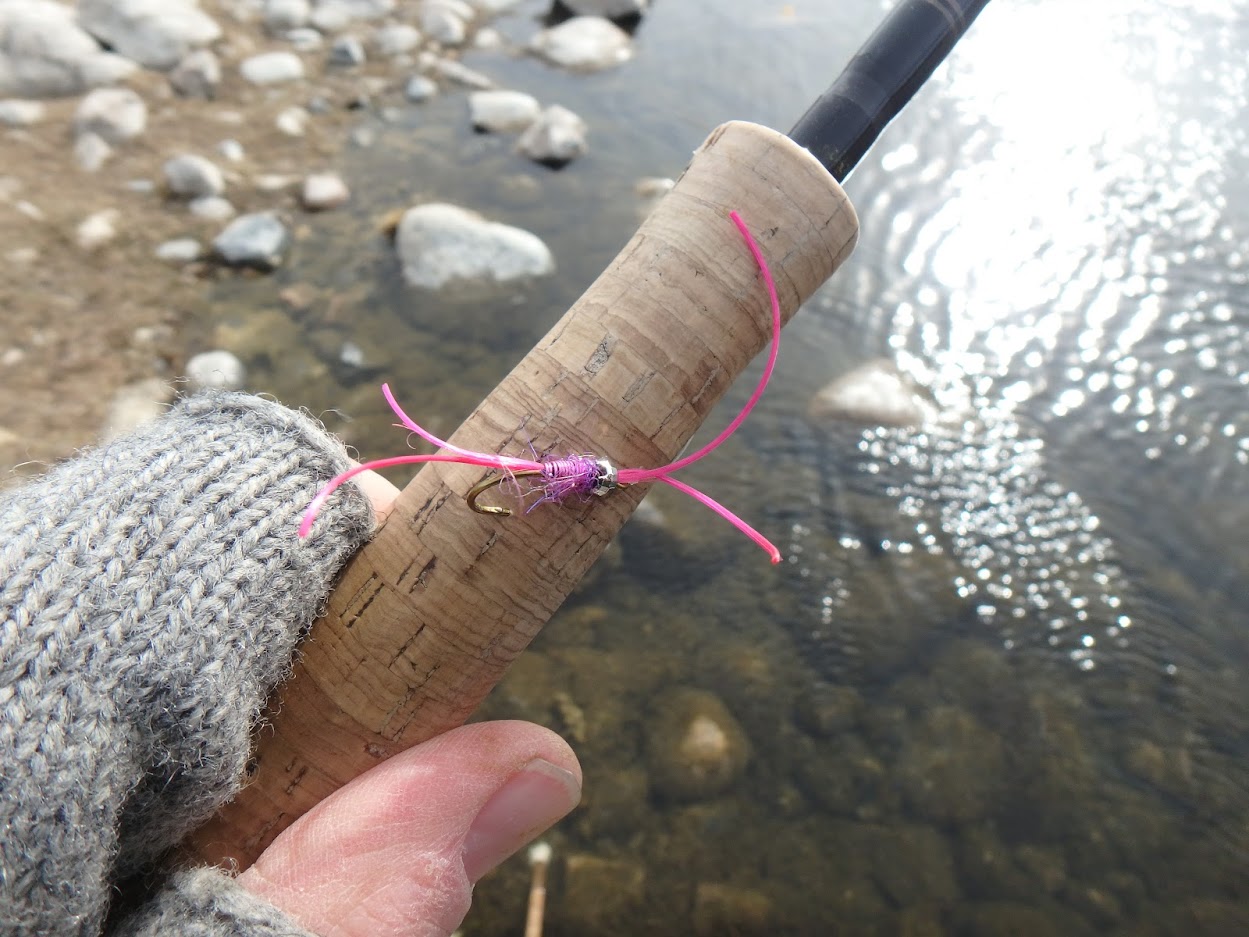 I ambled downstream to the tail and began a crossing, but three-fourths of the way I encountered fast water above my knees, so I retreated and modified my plan. Steve remained at the top of the run, so I began an upstream approach from the right bank. My line was configured with an apricot bead egg imitation, a D-ribbed red annelid worm and a second smaller red worm. The wind was a constant, and I began to chuck the rig  up and across, and then allowed the three fly arrangement to drift downstream with numerous mends. I covered ten yards with no success, at which point I arrived at the widest part of the pool. This spot was just above where the streambed narrowed and the current accelerated, so I once again attempted a crossing. I hoped that the slower current would enable me to manage the deeper channel close to the south bank, but alas when I reached that impediment to crossing, I was thigh deep, so I once again backed away. I was now committed to fishing the remainder of the pool from the north side. 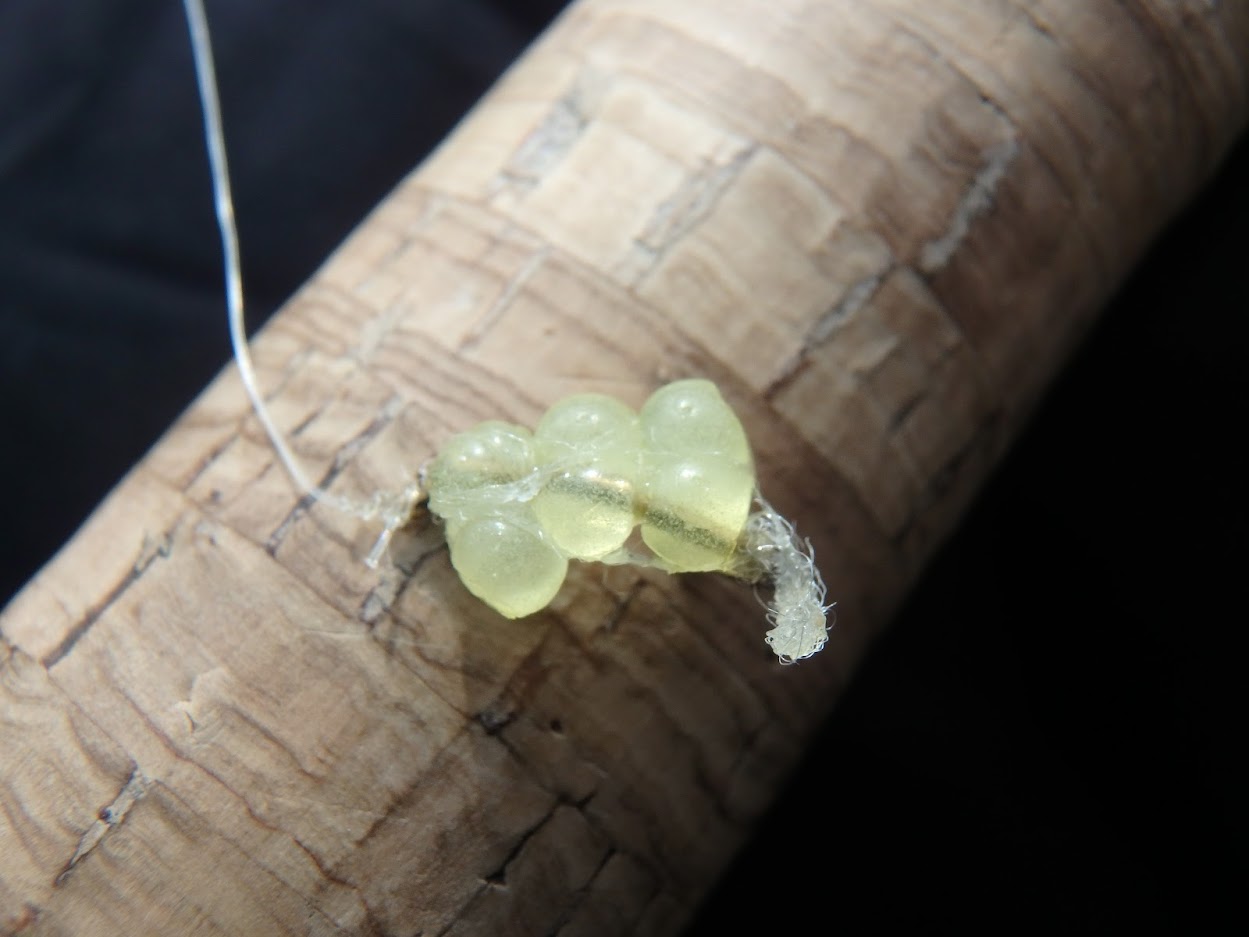 I accepted my position and once again focused on fishing the North Platte River in Fremont Canyon. After thirty minutes with no sign of a fish, I began to consider a fly change. I decided to retain the egg and larger annelid, while I rotated other flies through the bottom position on my line. I was anxious to experiment with the heavy metal worm, that I tied in my Andrew Grillos class, so that was the next fly to occupy my line. I also was not sure whether my flies were getting deep enough, so the relatively large tungsten bead in the center of the worm was also a welcome addition. 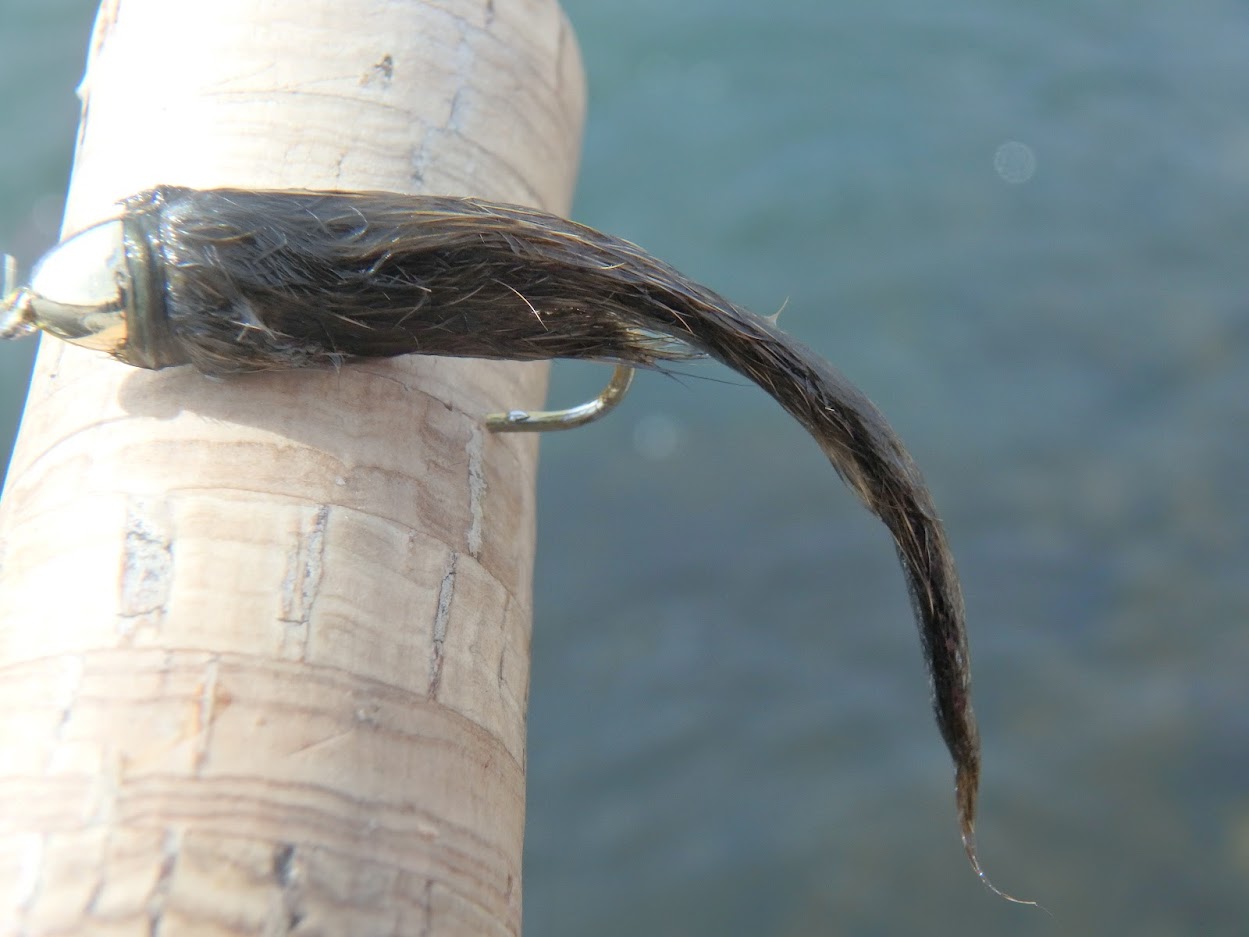 Unfortunately the heavy metal worm did not reverse my fortunes, so I cycled through a series of fly changes over the next hour, as I slowly progressed upstream toward Steve. Next I plucked a sucker spawn cluster from my fleece, and I allotted a fair amount of time to this new winter creation. No dice. The sucker spawn was not weighted, so I crimped another split shot to my leader to achieve more depth. I employed a dead drift as well as a swing at the end of the drift, but none of these tactics brought an ounce of success. 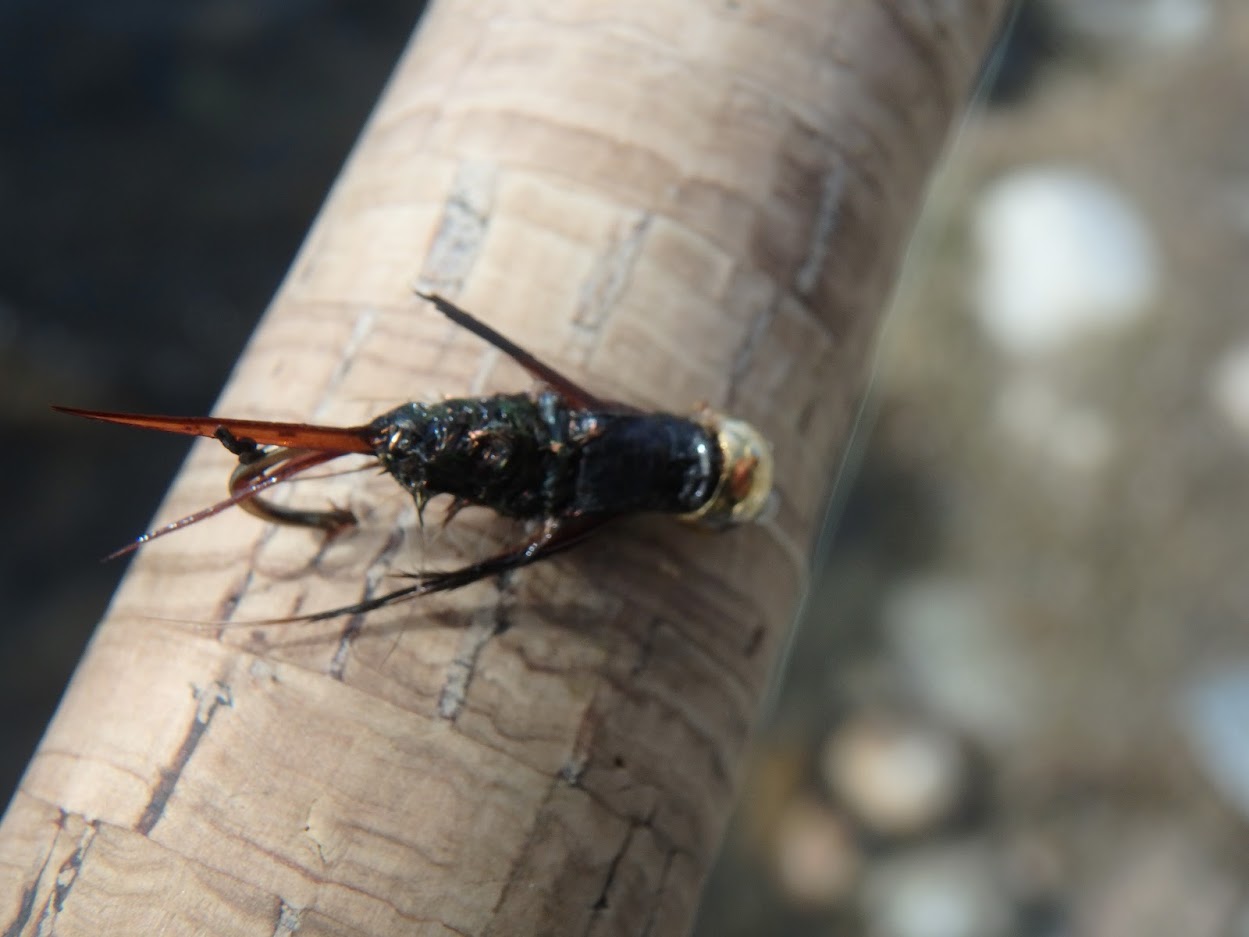 20 Incher Not Liked by Trout

Next I knotted a conehead slumpbuster to my line, and I fished this passively on a dead drift and then imparted various strips and twitches. The fish were not impressed. During the remainder of my time I cycled through a 20 incher, orange scud, and flashback zebra midge; but I was disappointed when 11:30 arrived without a sign of fish in Fremont Canyon. I sensed that I was pushing my rehabilitated elbow to the limit with constant casting across and into the wind, and the frequent mends were straining the joint excessively. Steve and I conferred and wisely decided to cut our losses and call it a day. 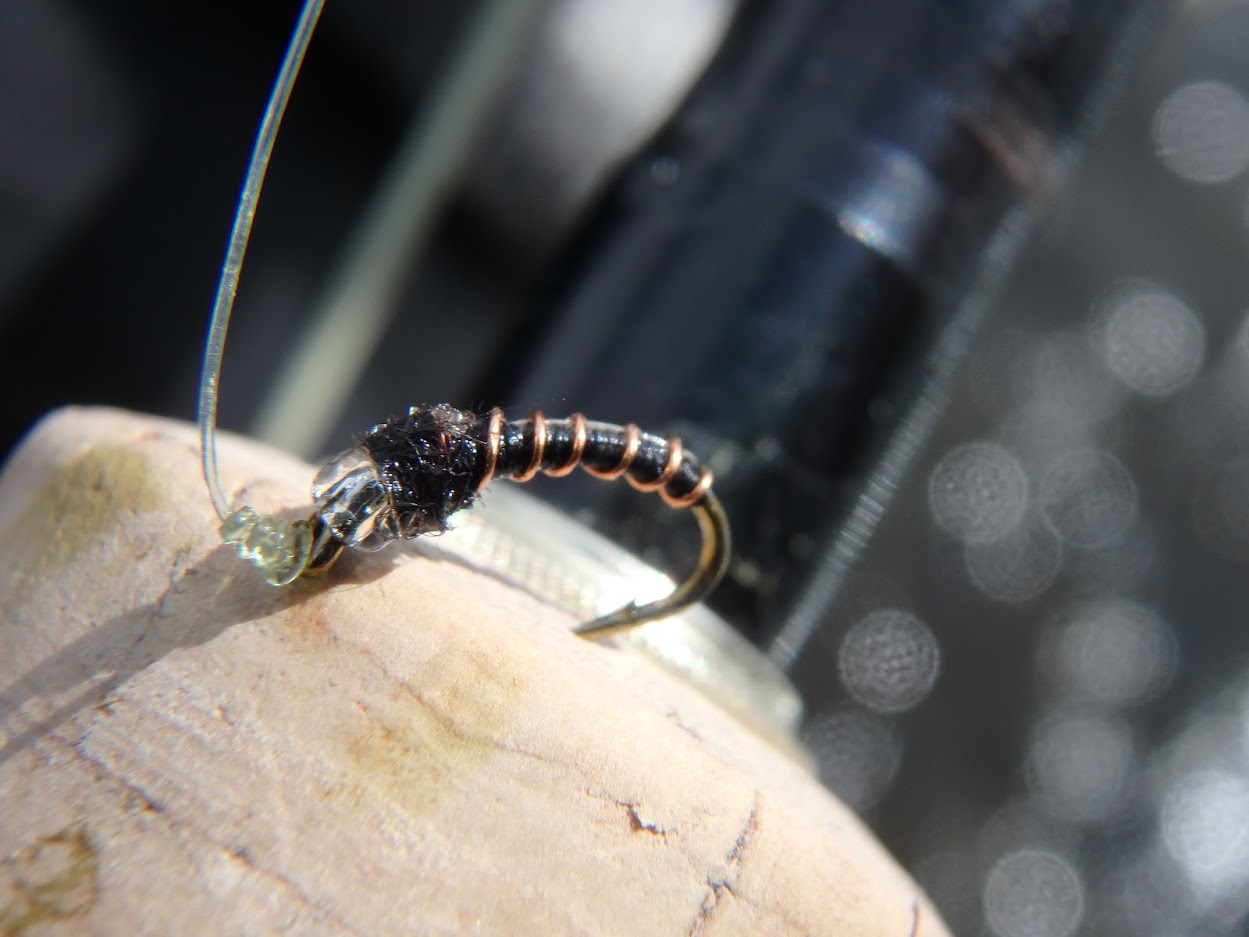 Mercury Midge Given a Chance

Steve and I remain fishless in Fremont Canyon. The combination of high wind and lockjawed fish made our one and a half hours of fly fishing a less than pleasurable experience. It will probably be another five years before we return, if we ever return.