My friend, Steve, and I floated the North Platte River below Grey Reef in six of the last seven years, and Monday, March 25 was our selected date for 2019. Once again we arranged to use Wyoming Fly Fishing Guide Service, and we requested the repeat services of our guide, Greg. As we drove to Fremont Canyon on Sunday, we were very concerned with the dark olive to brown color of the river, as heavy snow from the Bomb Cyclone snowstorm continued to melt and discolor the river.

We anxiously monitored the weather forecasts, and we were relieved to notice a sudden change for Monday. Originally the weather experts expected a high of 48 degrees with a 40% chance of snow and rain, but Sunday’s version suggested more favorable conditions of 52 degrees with a 10% chance of precipitation. Imagine our surprise and disappointment, when we checked on Monday morning and discovered a reversal to highs in the upper forties with wind, snow and rain likely up until noon. The turbid condition of the river and the bleak weather certainly elevated my level of concern. 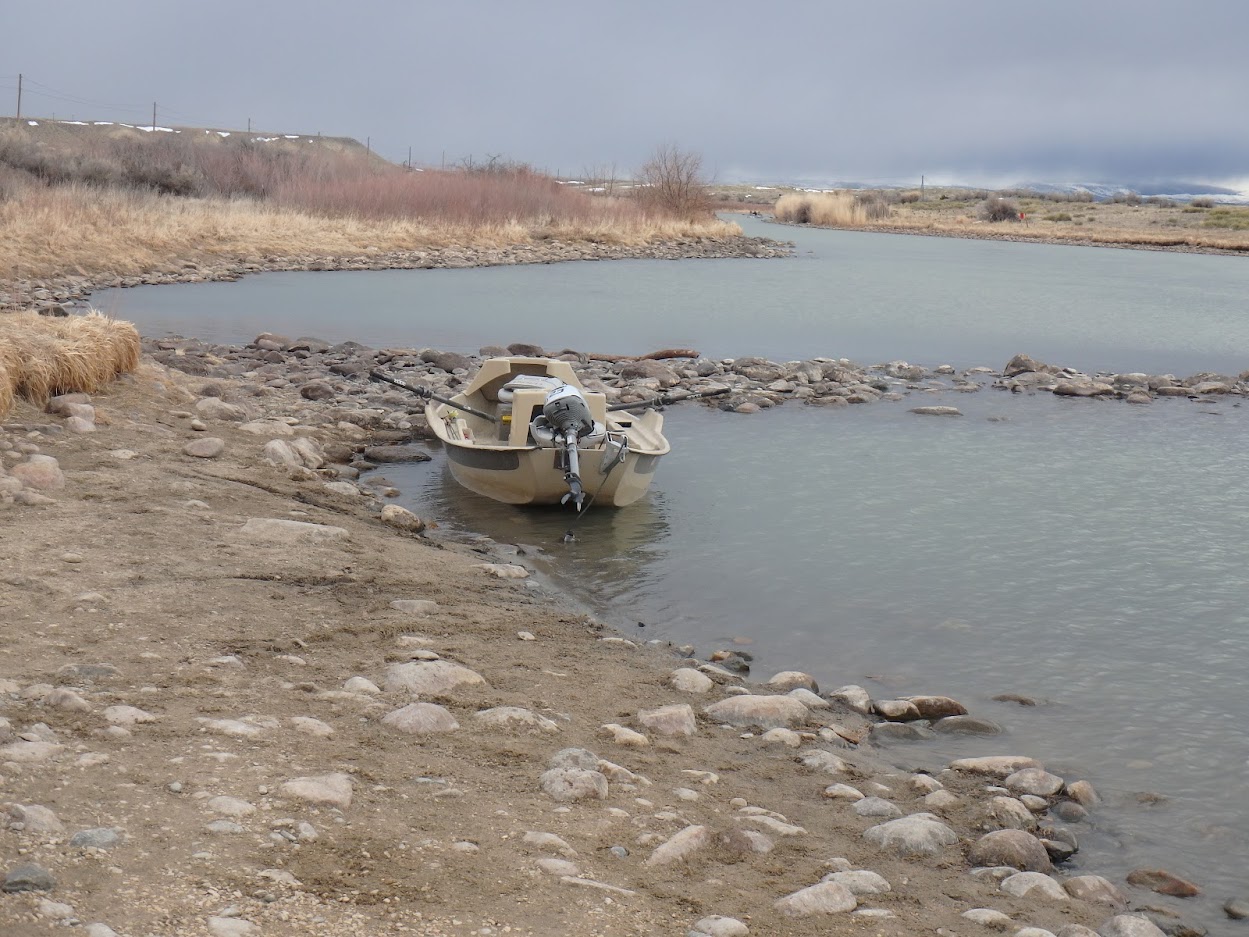 As expected, weather was the most significant factor on Monday, March 25. The temperature hovered in the thirties throughout the morning, and the frigid conditions were accompanied by wind, snow flurries, and heavy cloud cover. It was rather miserable. I placed my mittens containing hand warmers next to my seat in the rear of the boat, and every time we stopped fishing, I jammed my frozen hands into these comfort zones. 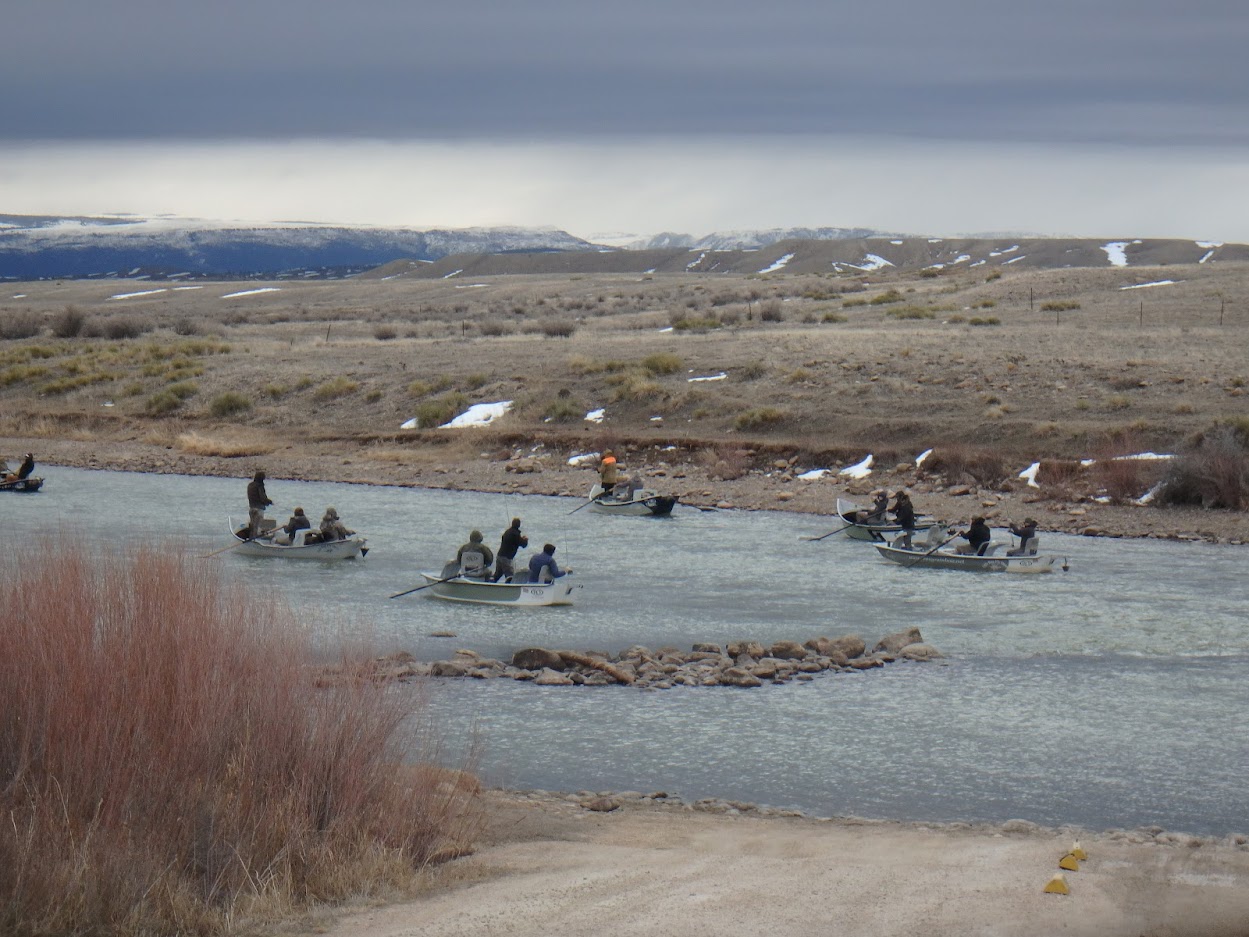 Quite a Circus at the Boat Ramp

The river was a fairly dense olive color even at the boat ramp below the dam, but our guide assured us that the visibility was adequate for the resident trout. The sun broke through the dense clouds in the late morning for a brief pleasant period, but then another large cloud rushed in, and the afternoon approximated the morning minus the snow with temperatures in the balmy low forties. For the last hour the clouds lifted a bit, and I refrained from placing my hands in the sanctuary of my mittens.

Because of the dirty water conditions our guide, Greg, worked extra hard to remain in the first three miles for an extended period of time. He knew the location of the tributaries dumping sediments, so he repeatedly rowed upstream along the bank to enable multiple drifts through productive fish holding runs in the upper river. 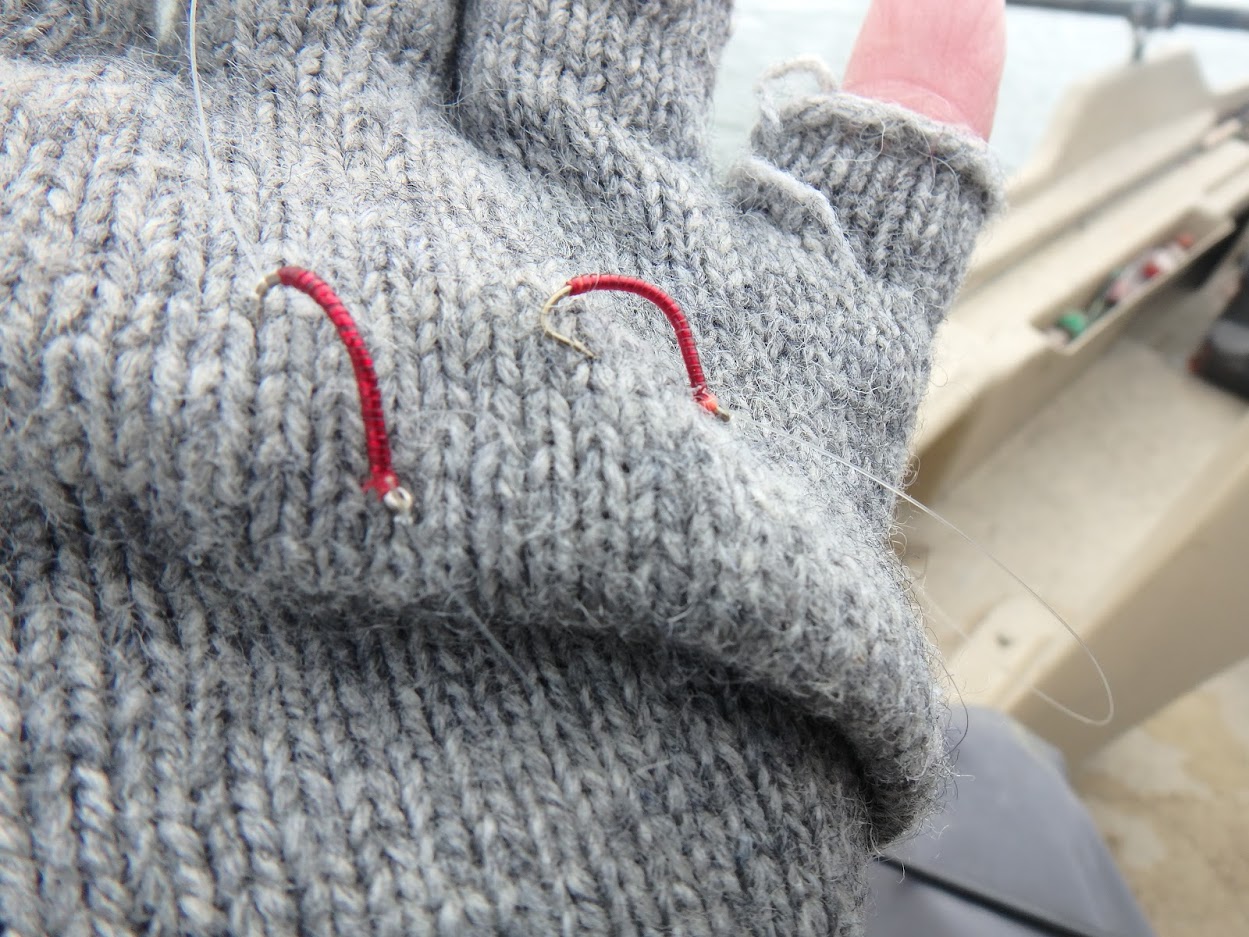 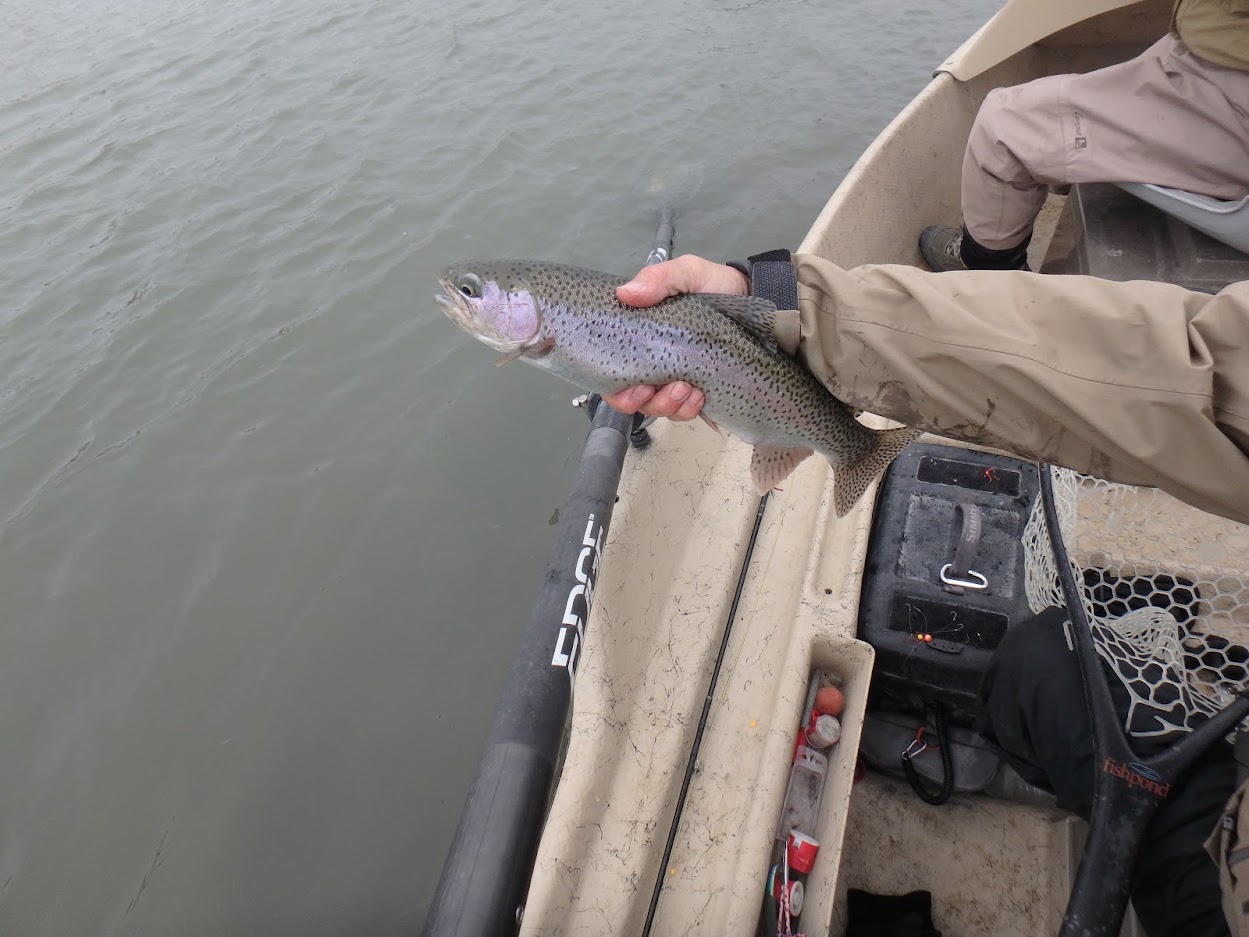 My line contained an apricot egg throughout the day, and a red annelid worm was a mainstay fifteen inches below the egg. Greg rotated a third fly twelve inches below the worm; and that position varied between smaller annelids of different colors, a gray leech, and a midge emerger. Over the course of the 7.5 hour, seven mile float I landed three rainbows in the morning and three more in the afternoon. Six fish in 7.5 hours of fishing represented disappointing results particularly for the North Platte Grey Reef section compared to history. All six fish were strong silver fighters in the fourteen to sixteen inch range, so size was not an issue. The first landed rainbow gobbled the orange egg, and the fifth fish smacked the midge emerger. The remainder of my catch grabbed one of the red annelid worms. 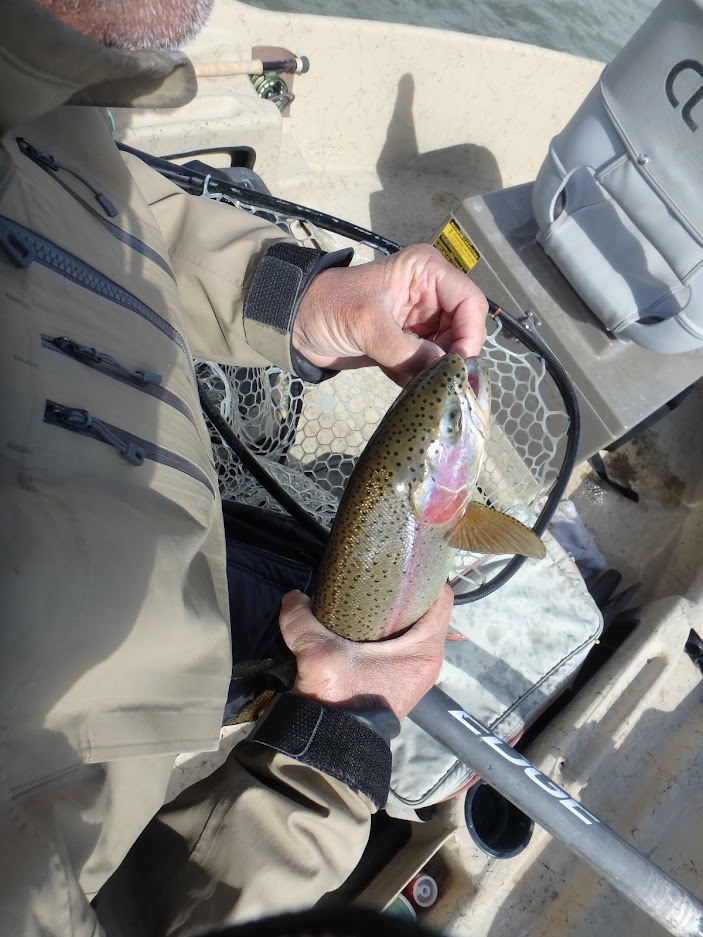 Overall it was one of my worst experiences on the tailwater west of Casper, WY. The common denominator to slow fishing on the North Platte seems to be timing. Our worst float fishing numbers coincided with trips that did not overlap with the spring flush. The snow melt turbidity was another negative in my opinion. The cold wet windy conditions were tolerable, when fishing action dominated; however, slow fishing caused one’s thoughts to dwell on adverse weather. 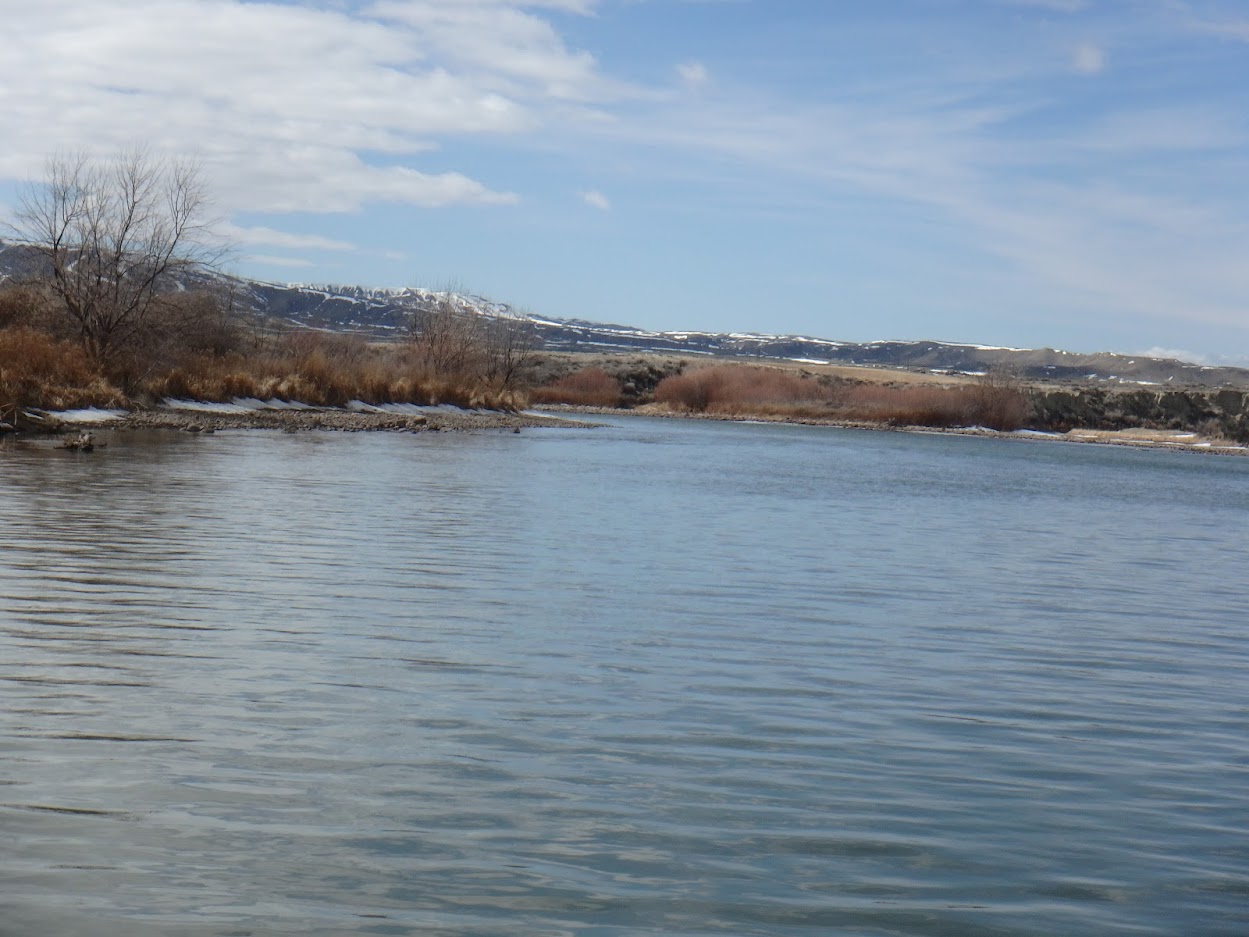