Some days are just magical, and the White River historically accounted for many memorable experiences. A tough day on the South Fork, however, triggered serious doubts in my fishing obsessed brain. Was 2016 simply a bad year for the waterways in the Flattops region?

After a career in finance and accounting I confess that I am a chronic counter. This character trait applies to money and baseball stats, and unfortunately it transfers to my passion of fly fishing. The reader can confirm my tendency by clicking on the fish counter tab on this blog. A quick glance at the first table reveals that my record year for cumulative fish count was 2012, when 930 trout found my net. As an aside I only count trout greater than six inches long, and I do not count foul hooked fish unless the fly is in the vicinity of the mouth. I do count fish if they slide free of the fly, as I begin the process of elevating toward my net.

In 2015 I narrowly missed setting a new record, but cold weather halted my progress by Thanksgiving, and I fell short by seventeen fish. In 2012 when I set my new high, my son’s girlfriend suggested that I should target 1,000, since I was so close, but time ran out before I could accomplish her challenge.

I underwent a significant surgical procedure in January 2016, and although I scheduled it during the winter intentionally, so that I could recover before the main season, I suspected that the rehabilitation period would crimp my ability to attain a new record. Fast forward to September 13, 2016, and I found myself perched on a fish count of 975, as I anticipated a day of fishing in one of my favorite places, the North Fork of the White River. I attributed my standing to a faster than expected recovery from surgery, some unexpected high fish count days, and a retired status that enabled frequent outings to Colorado streams.

I departed the South Fork Campground on Tuesday morning and made the one hour drive over mostly dirt roads in an hour, and then I pulled into the North Fork Campground and paid for site number 24 for Tuesday night. Three deer and two ringneck pheasants made an appearance, as I traveled along the remote backcountry roads. After securing my lodging for the night, I proceeded to a pullout along the road that leads to Trappers Lake, and I prepared for a day of fishing. The temperature was 55 degrees so I pulled on my raincoat as a windbreaker, and this layer remained in place for the remainder of the day, and I never felt overdressed. The temperature never surpassed the low sixties, and the cutting wind was brutal. Before I stepped into my waders, I hiked across the burnt hillside, so I could gaze at the river, and miraculously I encountered a feint trail that scaled the steep hillside and led to the edge of the stream. I accepted this good fortune, and after I assembled my Orvis Access four weight, I utilized the access trail. Once I reached the North Fork, I scrambled farther downstream along the base of the hillside for one hundred yards, and here I began my quest for trout and hopefully number 1,000. 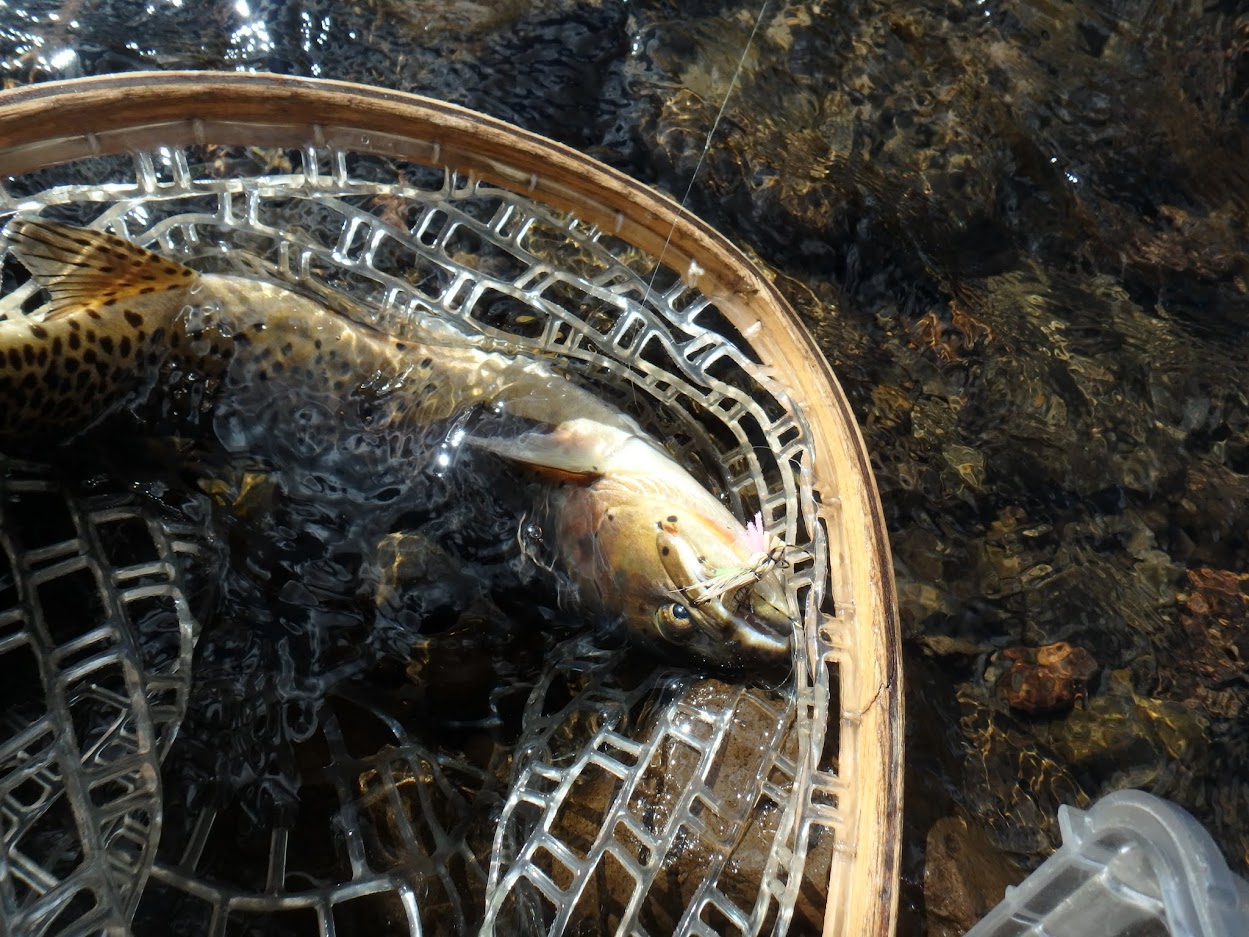 I tied the tan pool toy, that I utilized Monday, to my line; and I began to prospect the obvious deep holding spots. The stream in this area was relatively narrow with a steep gradient, and a large quantity of downed trees leftover from a past wildfire crossed the river at various intervals. This combination of natural obstacles made wading a challenge, but it also created some very attractive trout holding structure. Fairly early in my pursuit of trout it became obvious that the pool toy was a popular fish attractor. I landed six fish on the hopper, and this included some beautiful trout in the twelve to fourteen inch range. The first resident of my net was a deeply colored cutbow, and it was followed by a colorful brook trout. The first six also included some gorgeous rainbows, and I was quite pleased with my early good fortune. 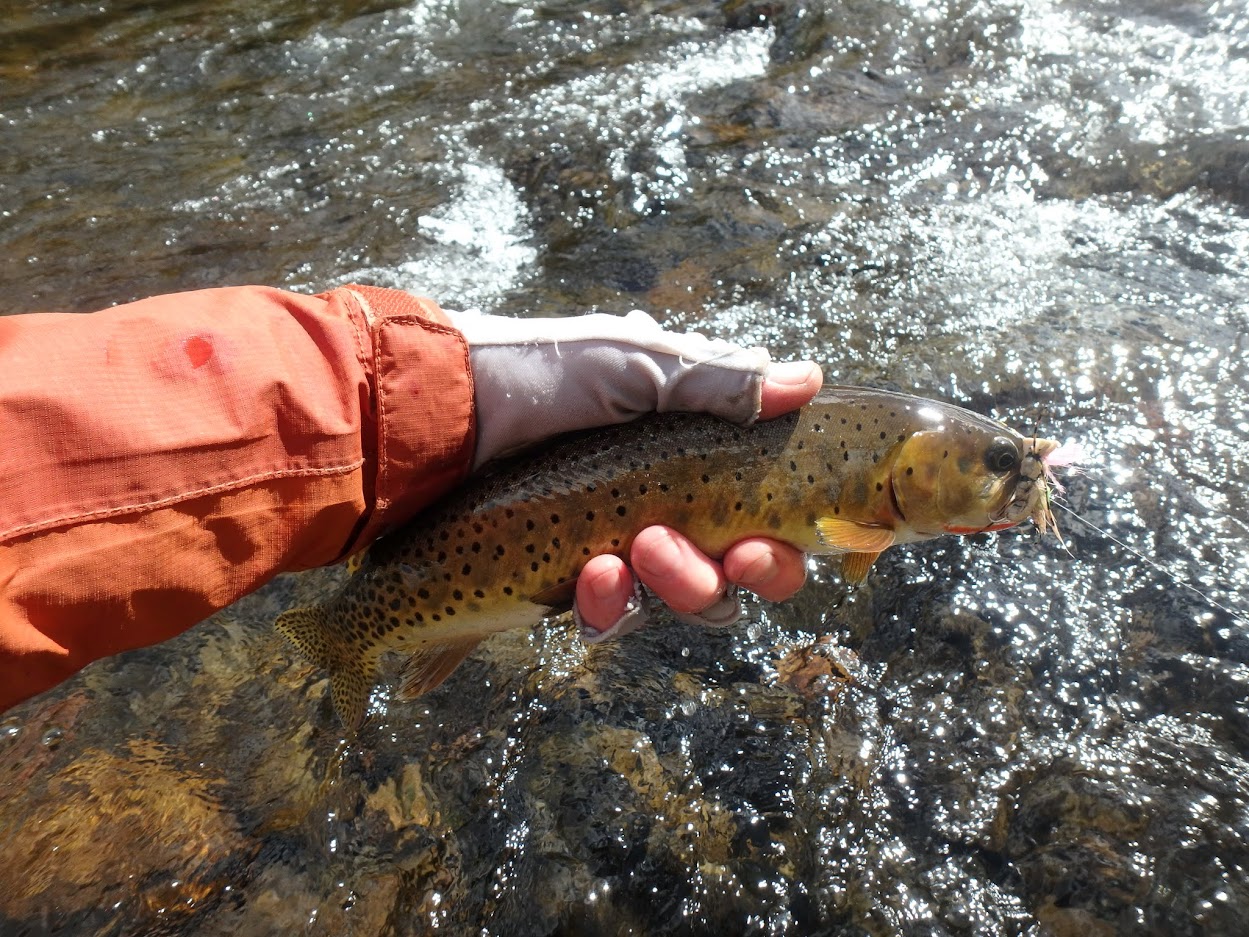 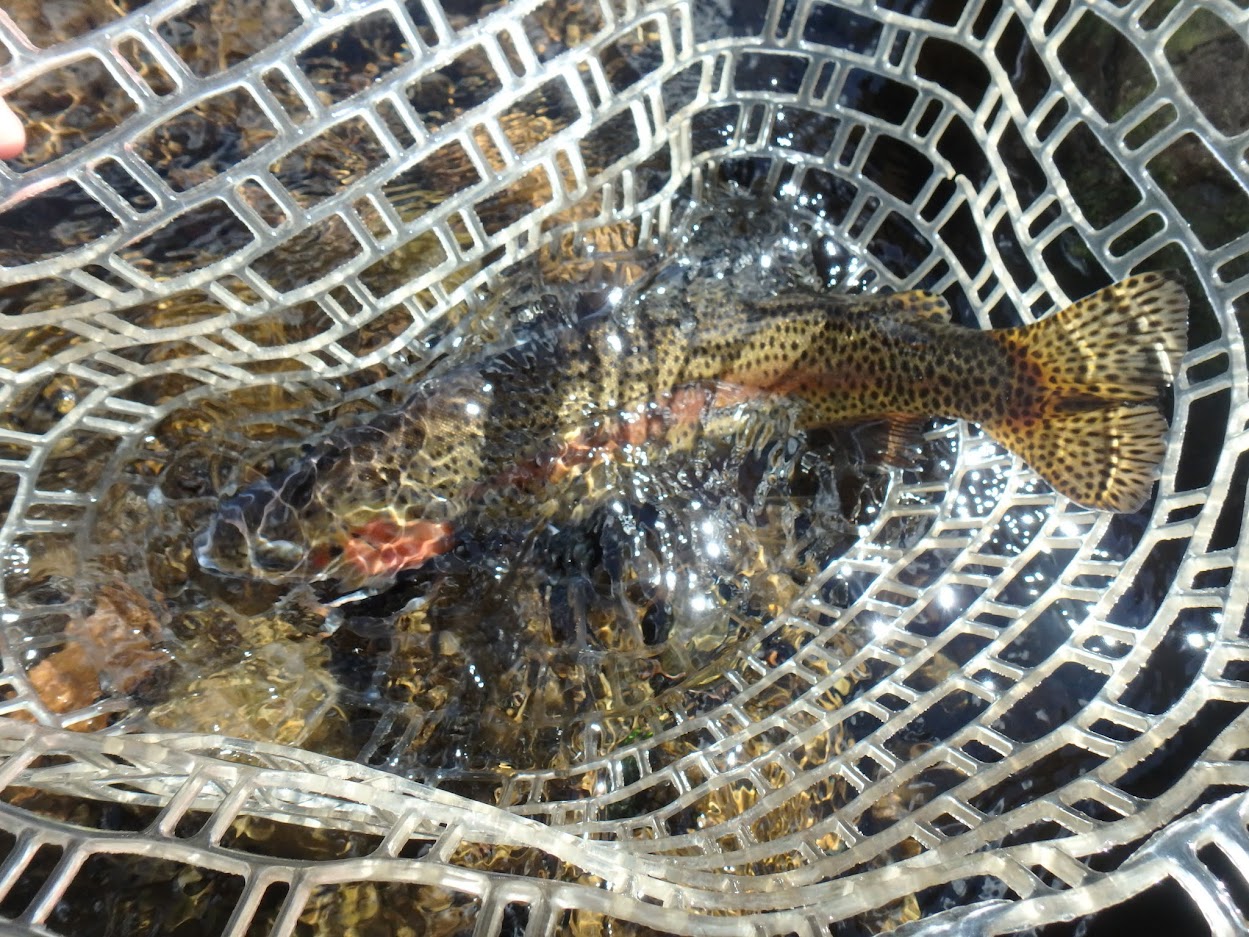 By 11:30 I was locked on five fish, and I set a goal of reaching eight by noon, when I planned to break for lunch. I am not certain why I set these ridiculous fish count goals, but I suppose it is part of my nature. As the morning evolved, I felt that I covered productive spots that failed to yield fish, so I added a salvation nymph dropper to the foam hopper, and this change delivered number seven. 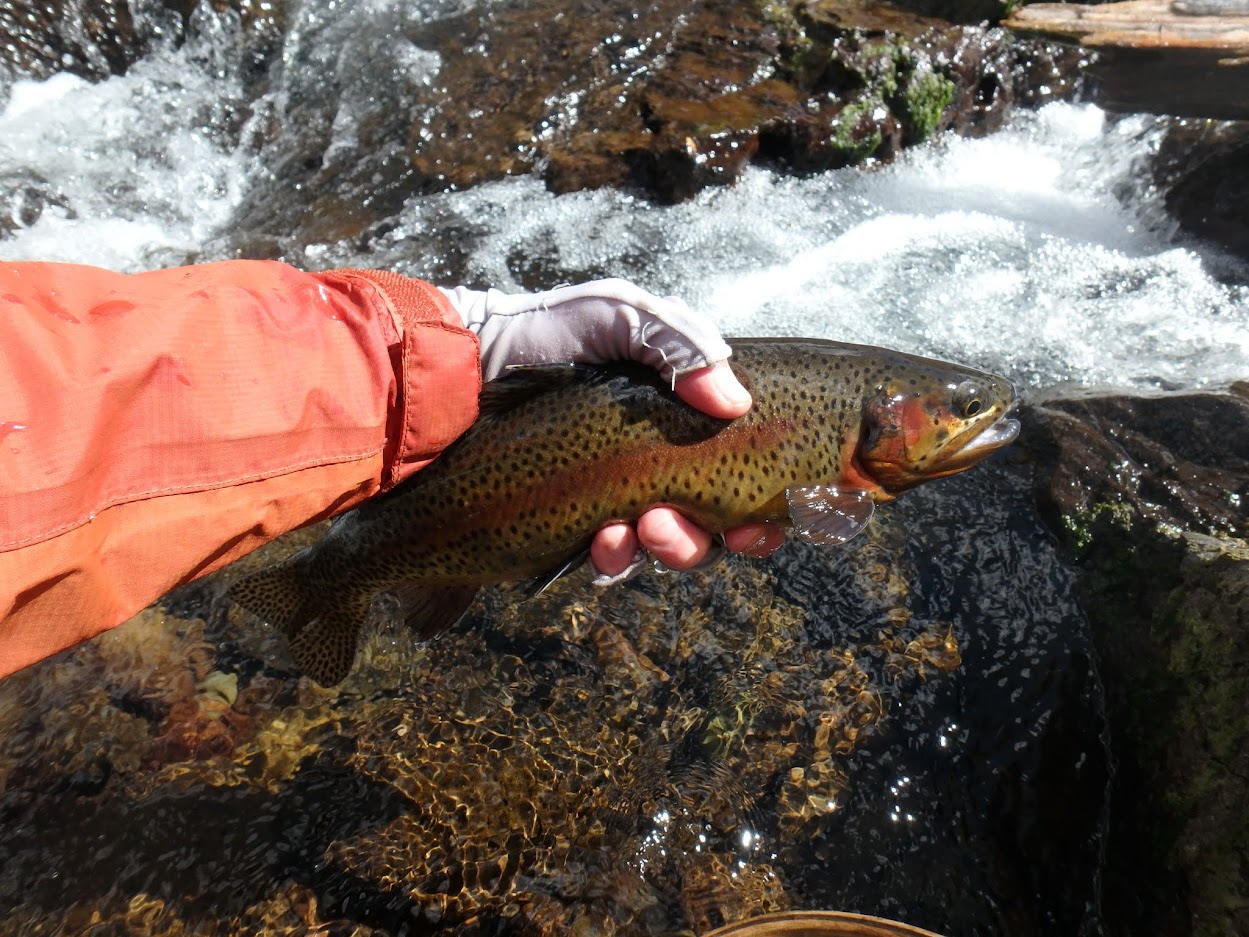 Crimson Is Amazing on This Fish

As I sat on a long log and enjoyed my lunch, the weather peaked for the day, and the sun made a rare appearance. I mentally reviewed my morning, and I realized that significant holes with depth and length produced fish. In the afternoon I would discover the reason for this observation. In addition to the seven fish that I successfully landed, I also experienced four or five temporary hook ups with the pool toy hopper, and this frustrated me. 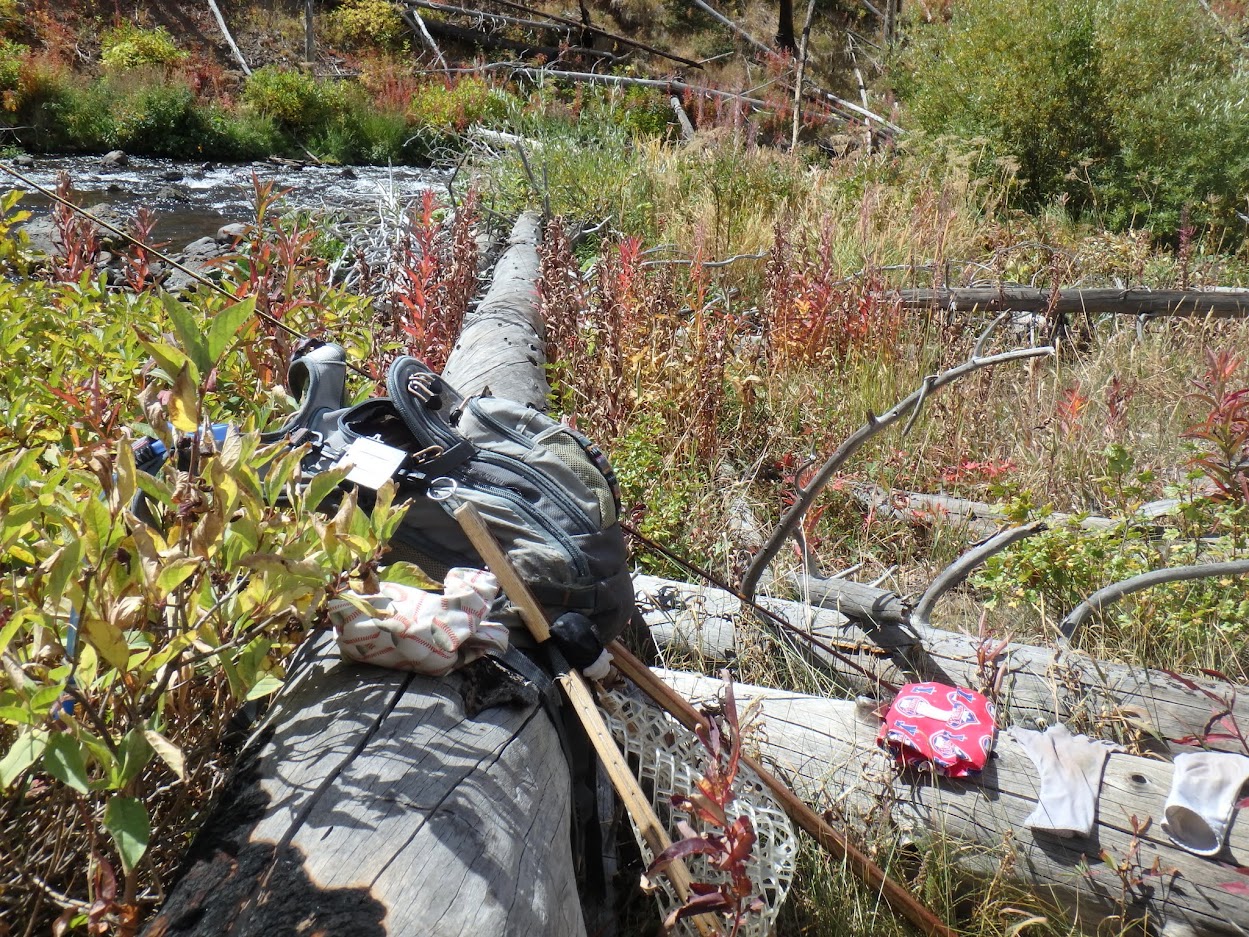 After lunch I discovered why the marginal small pockets and shallow riffles failed to produce in the morning. These places were the domain of the brook trout, and they preferred the smaller salvation dropper over the large surface hopper imitation. Between 12:30 and 5:00 the greatest hurdle to my fish catching success was determining how to maneuver around and over the plentiful natural obstructions to my progress. Dead fire damaged logs criss crossed the stream everywhere, but if I managed to circumvent the obstacles to get in the proper position, the fish appeared, and they relished my offerings. I landed my share of rainbows, cutthroats, and cutbows, but the brook trout were insatiable. 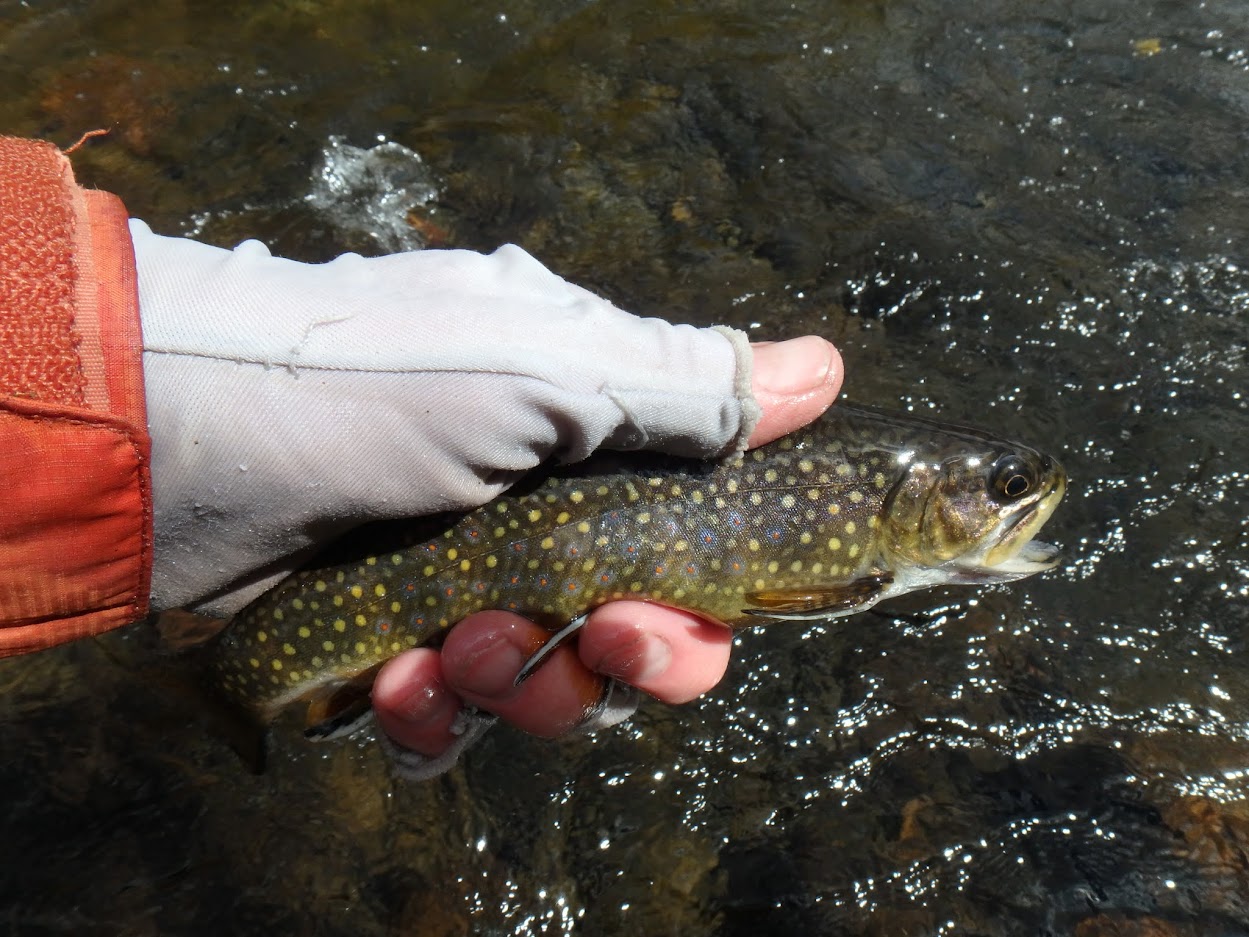 I estimate that I landed five cutthroats in the afternoon, ten rainbows/cutbows and twenty-six brookies. That is a lot of brook trout, and they were not universally six and seven inch dwarfs. Four or five were in the nine to twelve inch range, and that is a nice length for brook trout in a small stream. More stunning than their size was the intense color of these wild jewels, and I could not resist photographing them. 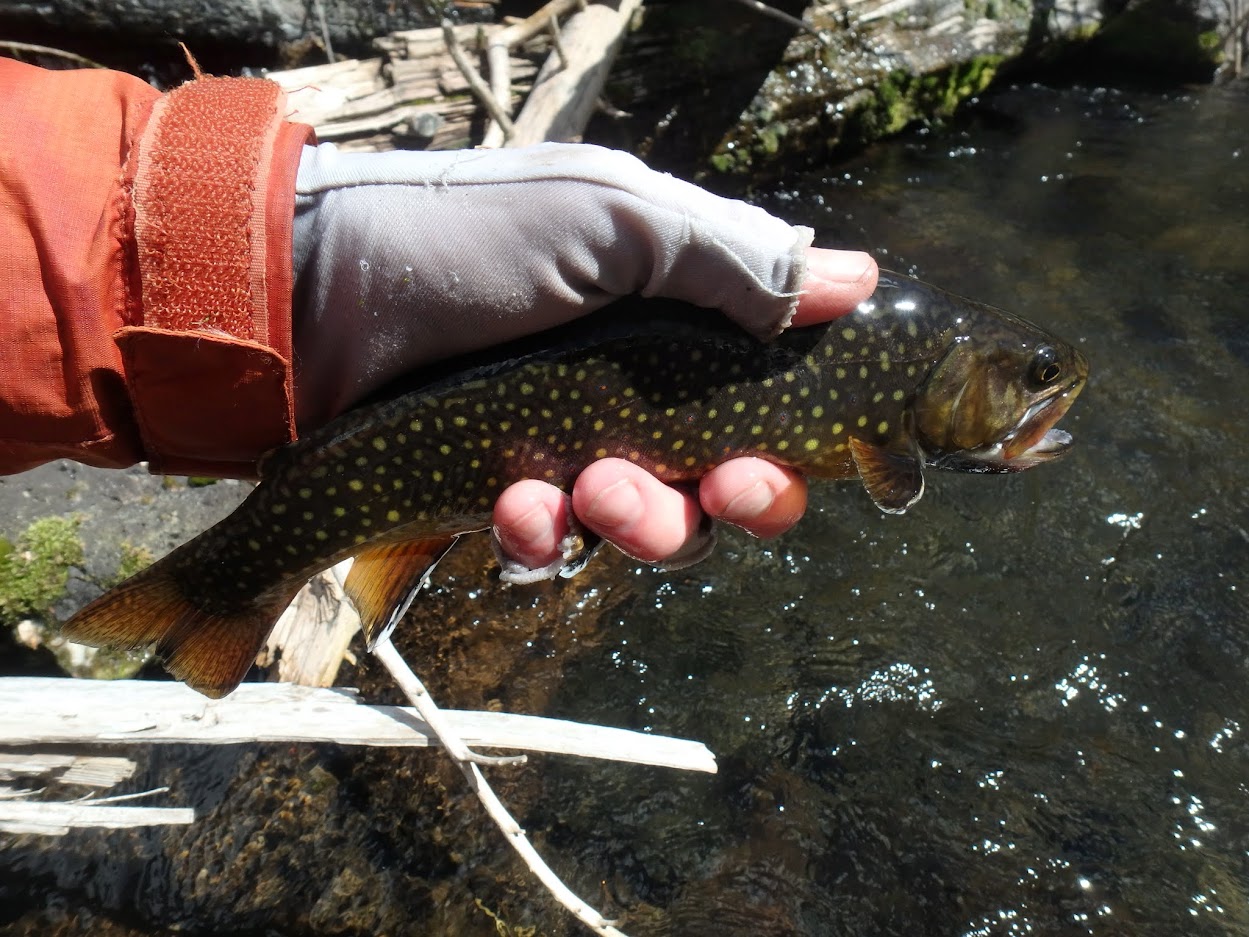 Just before 3PM I realized that my fish count on the day was twenty-four, and therefore, the cumulative count was 999. I hoped that the next fish would not be a six inch brook trout, and I was not disappointed, as a brilliant twelve inch rainbow shot to the surface and crushed the pool toy. It was an appropriate conclusion to my quest for 1,000, and I took a moment to celebrate.  A brief shout of joy sufficed, and then I resumed my search for more trout in the North Fork of the White River. 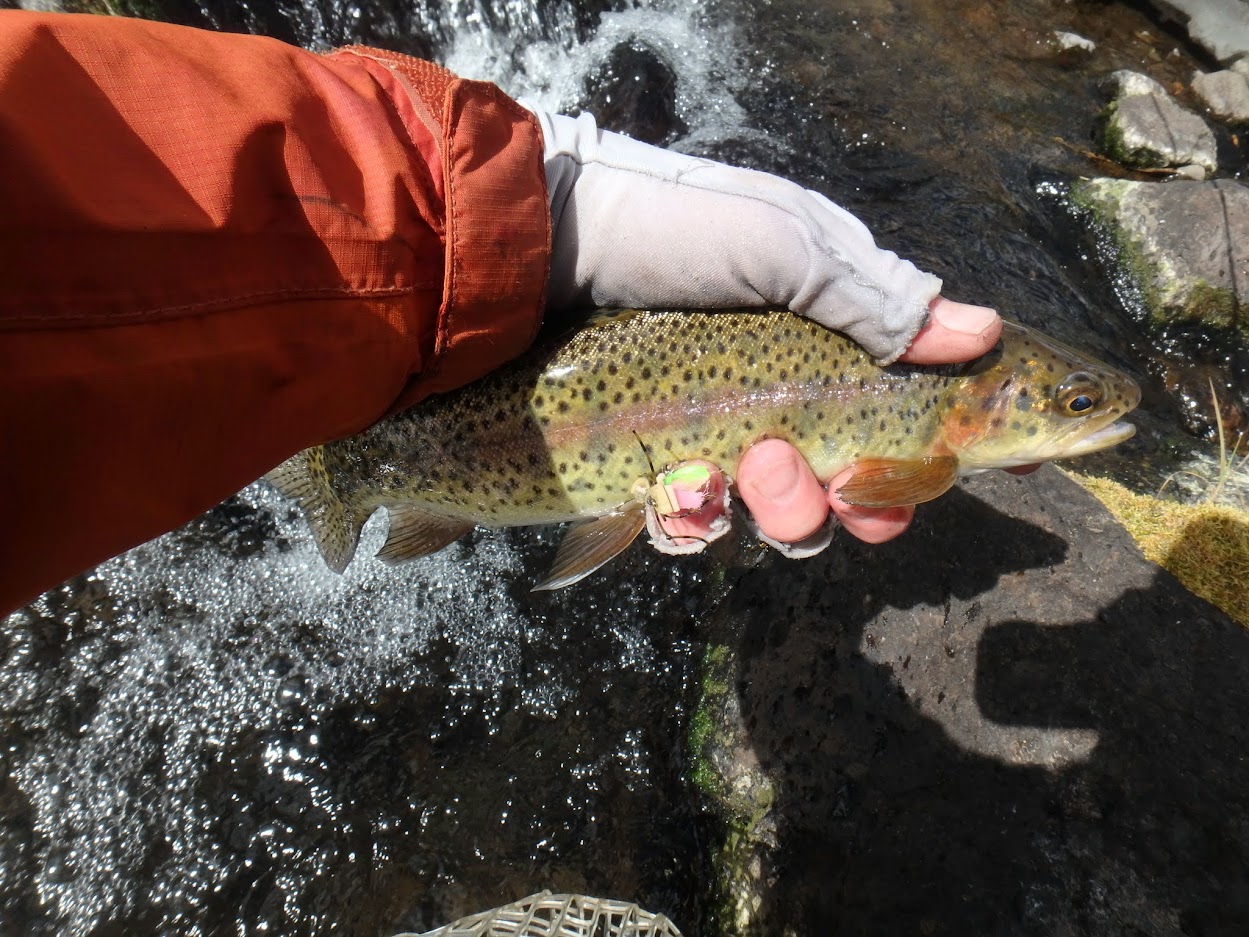 In the afternoon momentary hook ups on the pool toy continued to frustrate me, and the escaping fish appeared to by above average size. In the past I blamed the dropper for this circumstance, but the same long distance releases plagued me in the morning, when only one fly was attached to my line. Midway through the afternoon the pool toy lost all its legs, and I suspect that rubber knotted legs are a key triggering characteristic of a hopper. I removed the handicapped hopper and replaced it with a Charlie boy with the hope that perhaps a different grasshopper imitation would eliminate the failed hook ups. Perhaps it was purely coincidental, but ten minutes elapsed with no action on the Charlie boy/salvation combination, so I returned to a new tan pool toy with its legs intact. 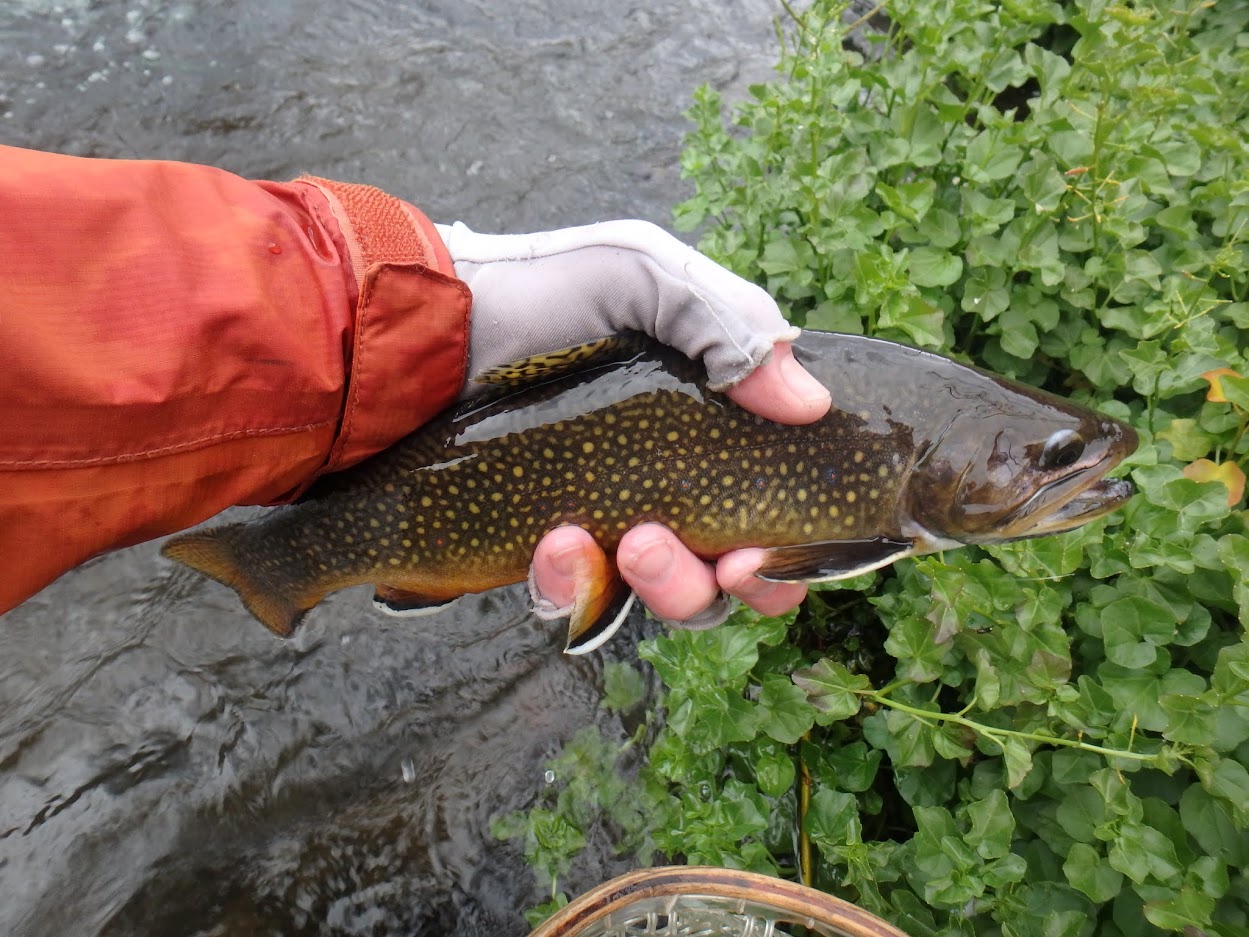 On Tuesday September 13 I had a blast. The annoying wind was a negative factor, but the fish were responsive to my flies, and they generally emerged where I expected. I easily fell into a smooth rhythm, and an almost certain top ten day resulted. Judging from the lack of worn paths, I suspect that I was off the fisherman grid, and this is understandable given the impediments to accessing the stream and the difficult wading. 1,000 fish says it all! 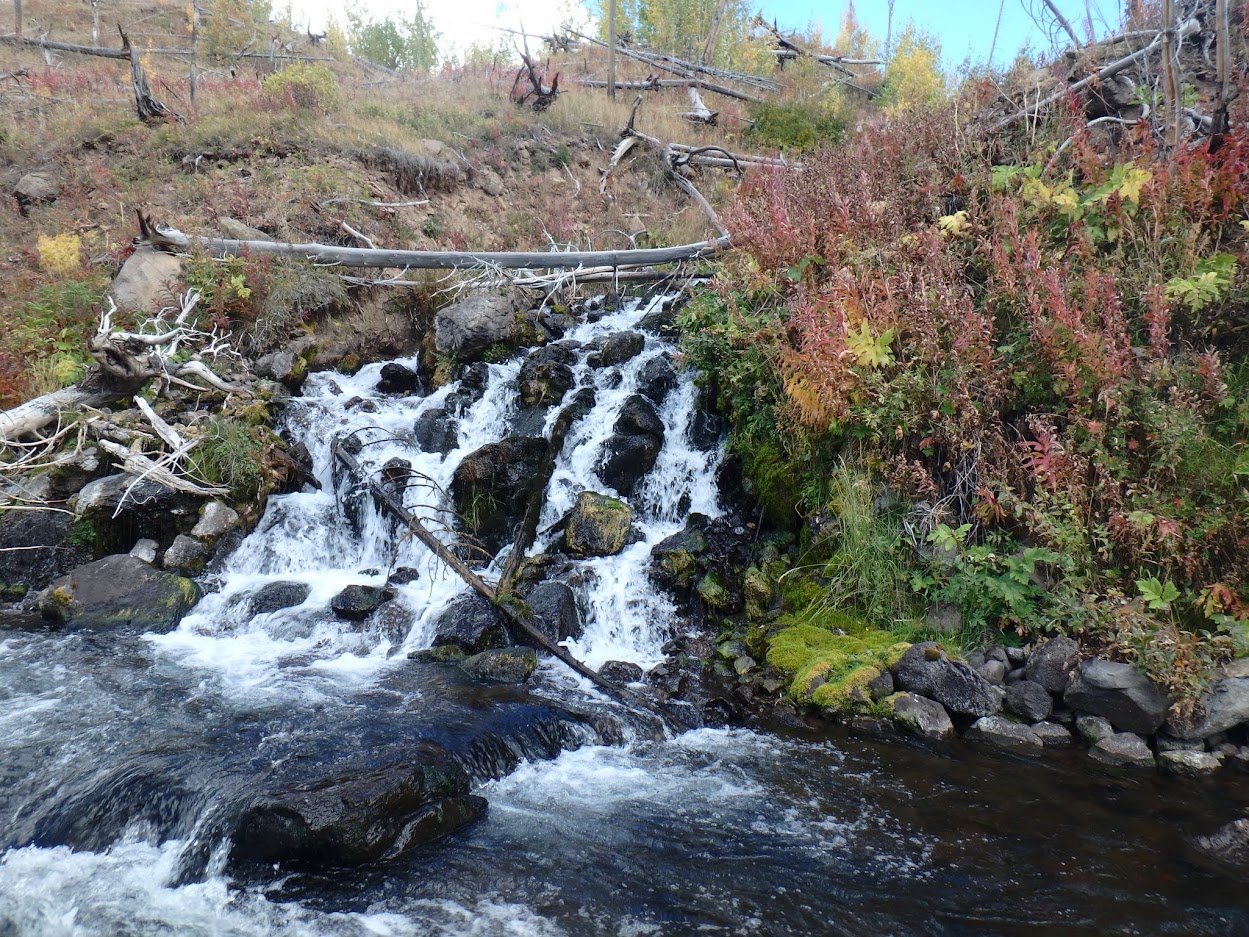 A Waterfall Enters the Main Stream