When Jane mentioned that she was looking at lodging in the Flattops, I was all in favor. After five days of outstanding weather, fishing and scenery earlier in September; I was extremely interested in another day of fly fishing in the area. A couple additional days of hiking and leaf peeping made the prospect even more appealing, and a rental cabin eliminated the hardships of camping in late September, when low  temperatures were apt to fall into the upper twenties.

We took the plunge and rented the Chokecherry cabin located at the Ute Lodge Resort for three nights from Sunday, September 27 through September 29. We made the drive on Sunday, September 27 and arrived in time to launch a short hike up the Papoose Trail. An arched trailhead entrance was literally twenty steps from our front door. The cabin was rustic and cute but quite small. It consisted of three rooms; a bedroom, a bathroom and a kitchen. The kitchen was barely larger than the bathroom, and the only free space to relax and read, aside from the bed, was two chairs and a very small table in the kitchen. The premier feature of the cabin was the huge log bed, which I am certain exceeded the dimensions of a king size. An electric heater controlled by a thermostat kept the bedroom cozy, but the bathroom remained quite chilly, and until we discovered a space heater, the kitchen was downright frigid. Needless to say, the space heater logged a lot of usage in the kitchen. A small porch was attached to the front of the cabin, and a homemade barrel grill and picnic table occupied the small area in front of the cabin. We grilled bratwursts on Tuesday night to take advantage of the outdoor amenities.

On Monday Jane and I actually completed two fairly rigorous hikes. First on our agenda was an out and back on the West Marvine Creek Trail. This stroll totaled 4.5 miles and 644 feet of elevation gain. On our return we bumped into an archery hunter from Indiana, who was packing out fifty pounds of his elk kill. He told us he was going to pay an outfitter to pack out the remainder for $300, and it struck us, that this fee could purchase quite a few steaks! Upon our completion of the West Marvine Creek hike we consumed our lunches at an East Marvine Campground site, and then we drove to the tralhead for the Ute Creek trail. Another out and back on this challenging Flattops trail accumulated another 3.1 miles and 521 feet of elevation gain. This hike was less interesting than West Marvine and consisted almost entirely of climbing a ridge and then returning back down.

Tuesday was my designated fishing day, and I will return to that topic later in this post. Wednesday was our get away day, and we decided to tackle some trail riding at the JML stables that neighbored the Ute Lodge. We packed all our belongings in the Santa Fe and rolled around the corner to the corral behind the bungalow and parked next to a fence and some pickup trucks. Two men were present in the corral, and one was banging away on metal, as he shaped a horseshoe. The other tall gentleman approached us, and we inquired whether we could enjoy a trail ride on the last day of September. He replied that we needed to talk to Marie, as she managed the trail ride side of the business. At our patient insistence, he called Marie, and they agreed that the gentleman with us would saddle up Patty and Charley and take us on a two hour ride. The charge was $25 per hour, so two riders for two hours equaled $100. Our reluctant wrangler went through the fence and gathered Patty and Charley and brought them toward us, at which point I asked, if they accepted a credit card. The cowboy replied no, and Jane and I quickly counted our cash and determined that our total amount was $93. We apologized for putting the man through the exercise of gathering the horses, be he seemed somewhat relieved to be released from wrangling duty. As we drove away, we discussed the idea of doing a one hour ride, as that fit within our cash availability, but by then our thoughts shifted to another hike. 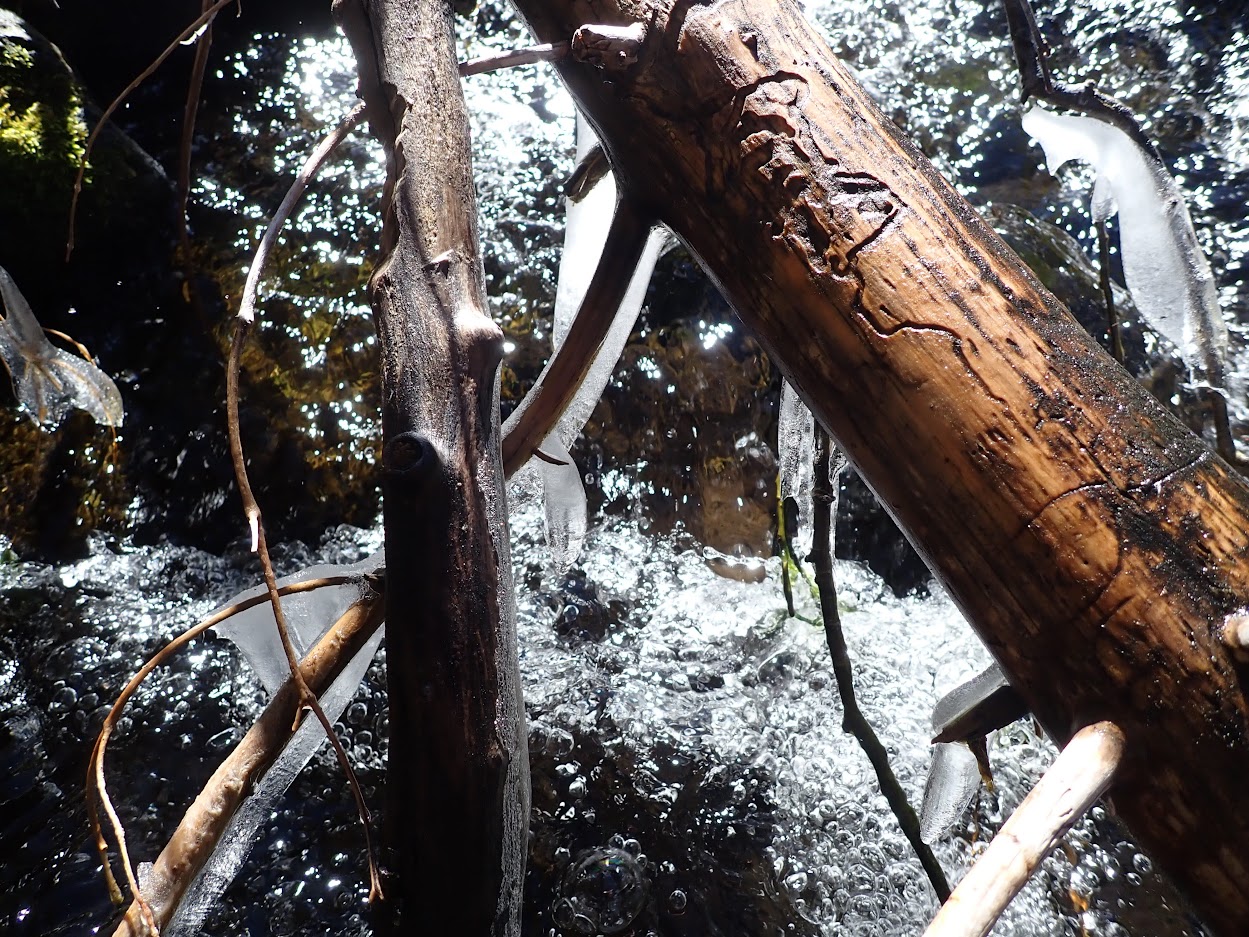 Ice Confirms It Was Cold Overnight

For our last hike before departing the Flattops we returned to the Marvine Creek overflow parking lot and found the East Marvine Trail.  Our destination was the intersection with another Flattops Wilderness crossing trail, and this hike logged 5.4 miles on my Garmin activity tracker, and the cumulative vertical gain was 1,095 feet. Needless to to say, we were a pair of tired Coloradans, when we returned to the car. After the high country amble we adjourned to a campsite at the Marvine Campground and once again devoured enough snacks to replenish our energy stores. 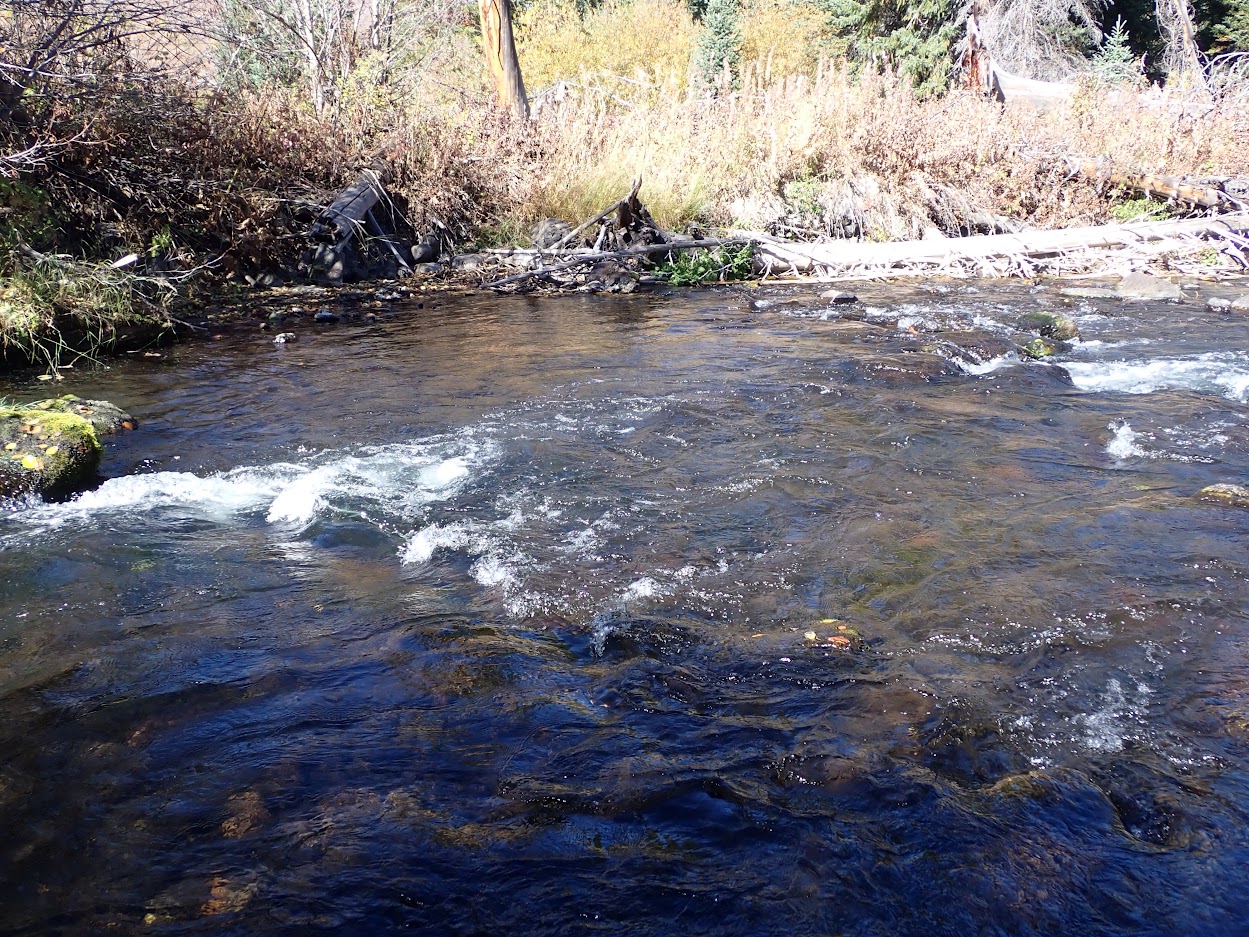 Lovely Spot for a Fish

Tuesday was my day to fish, while Jane hiked to Little Trappers Lake and then climbed three-fourths of the Skinny Fish Lake Trail. The temperature was around 55 degrees, when I began my short trek to the North Fork, and Jane accompanied me on most of my inbound stroll. On Tuesday the stream was flowing at nearly ideal levels for the end of September, and the high temperature for the day eventually spiked in the low seventies. When Jane and I separated, I agreed to return to the place where we parked by 4PM, and Jane returned to the car and drove to Trappers Lake to hike. 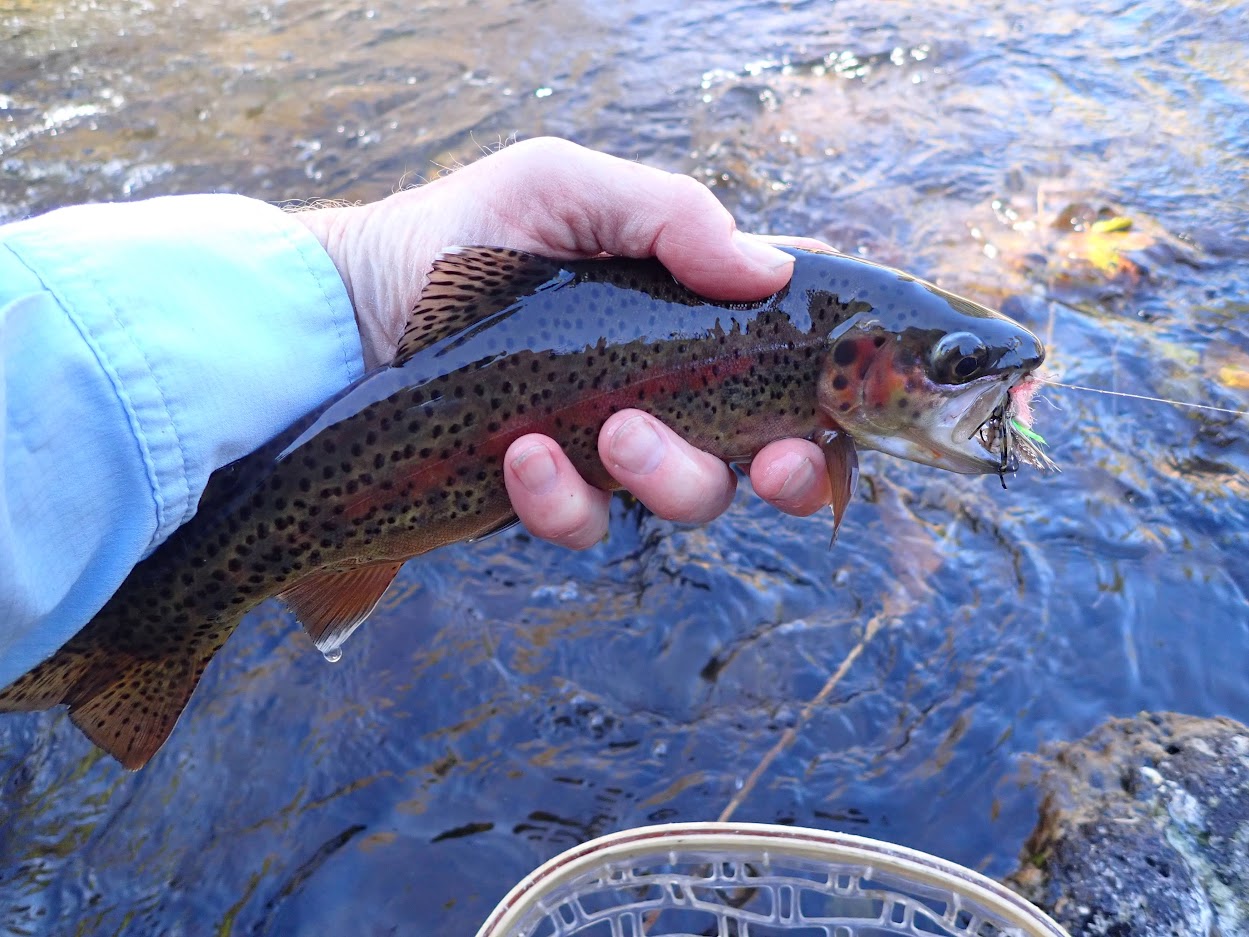 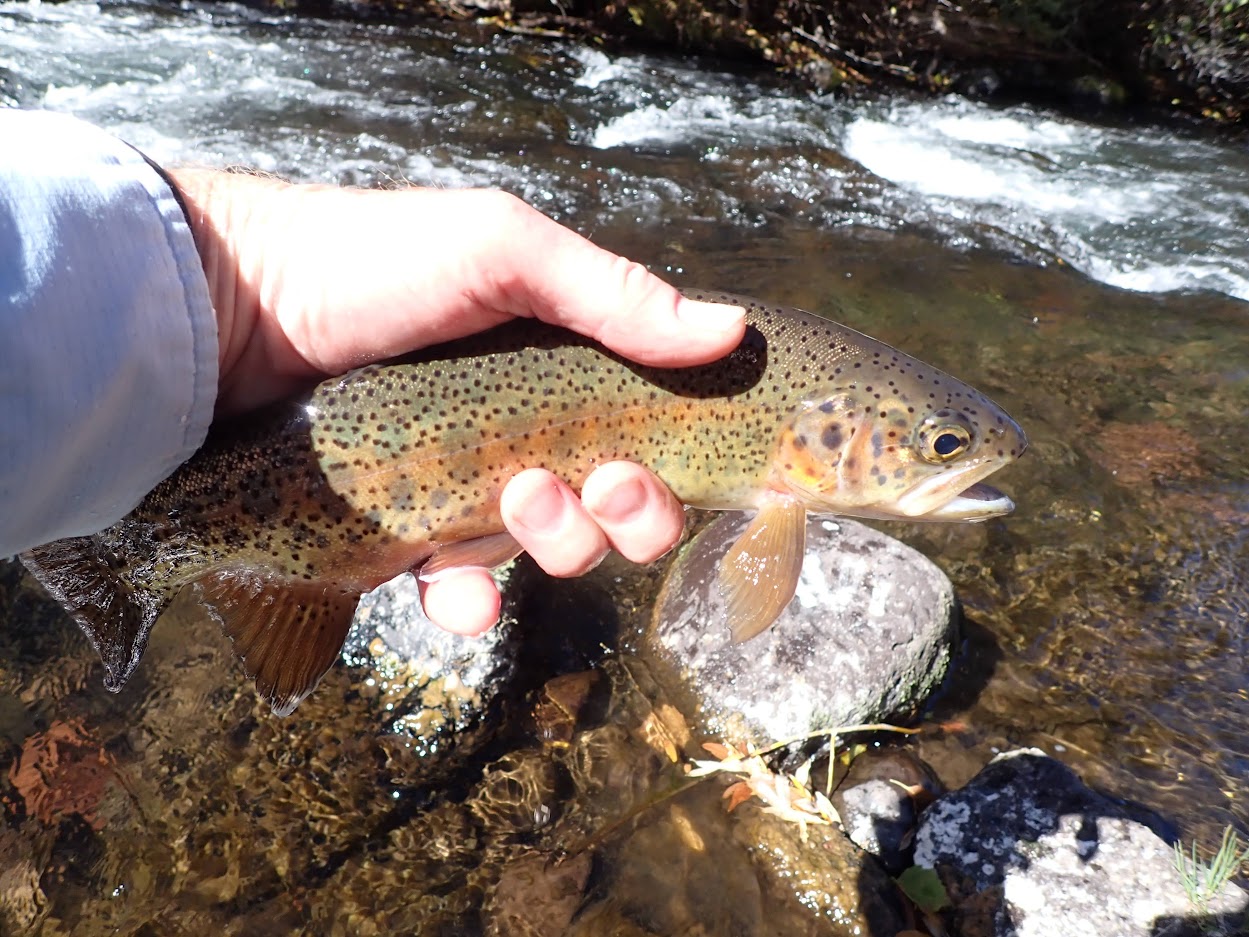 I began my day with a tan pool toy hopper, that I fished solo. This approach yielded excellent results on Friday, September 18, and I was hopeful that history would repeat itself two weeks later. It did not. I hooked and landed two eleven inch cutbows in the first thirty minutes and then fell into a slump. In response to the slow action I added a salvation nymph, and the shiny attractor duped a small brook trout and rainbow trout, before I broke for lunch at noon. Four fish in an hour was acceptable, but I must concede, that I had higher expectations. 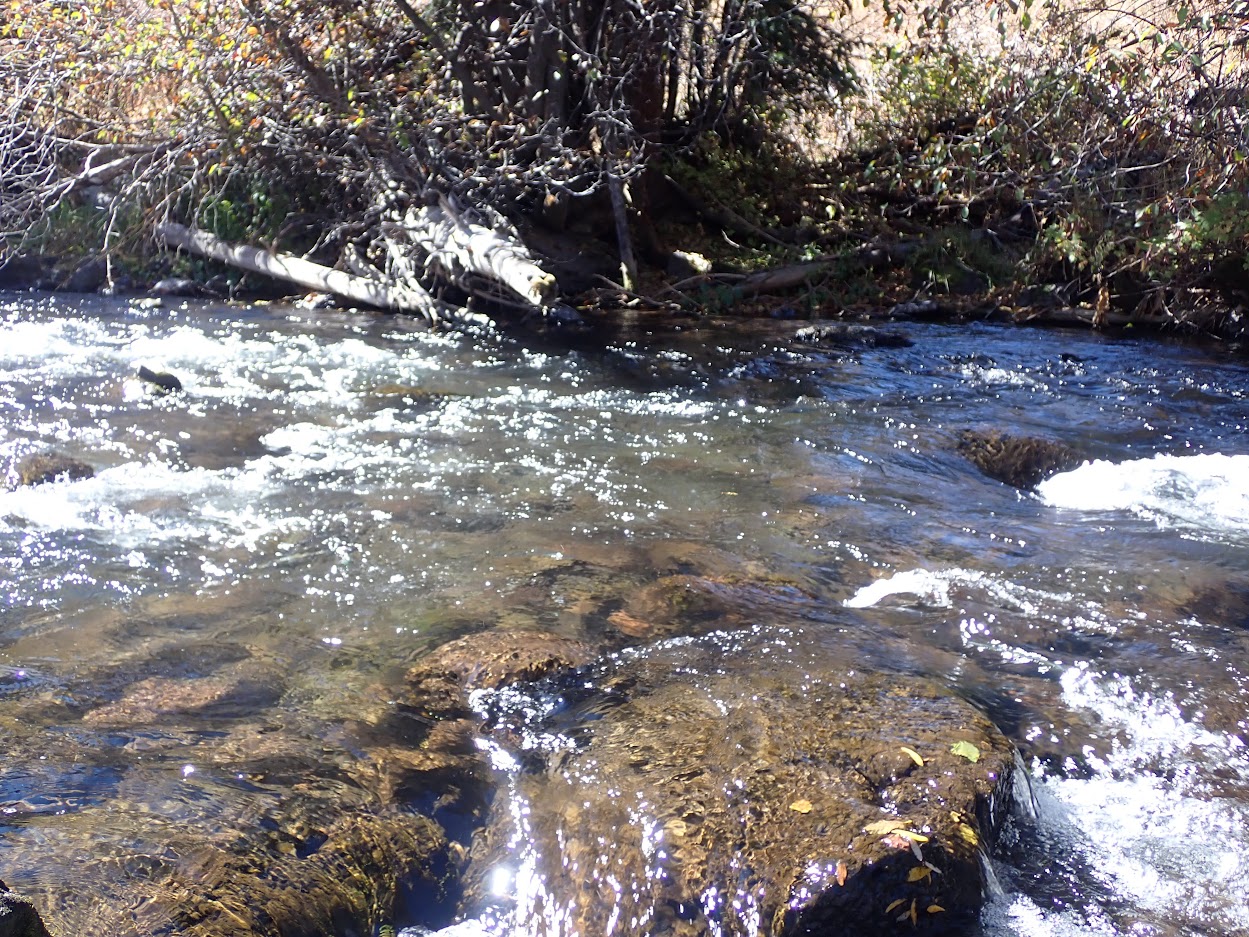 In Front of the Partially Exposed Rock Right of Center 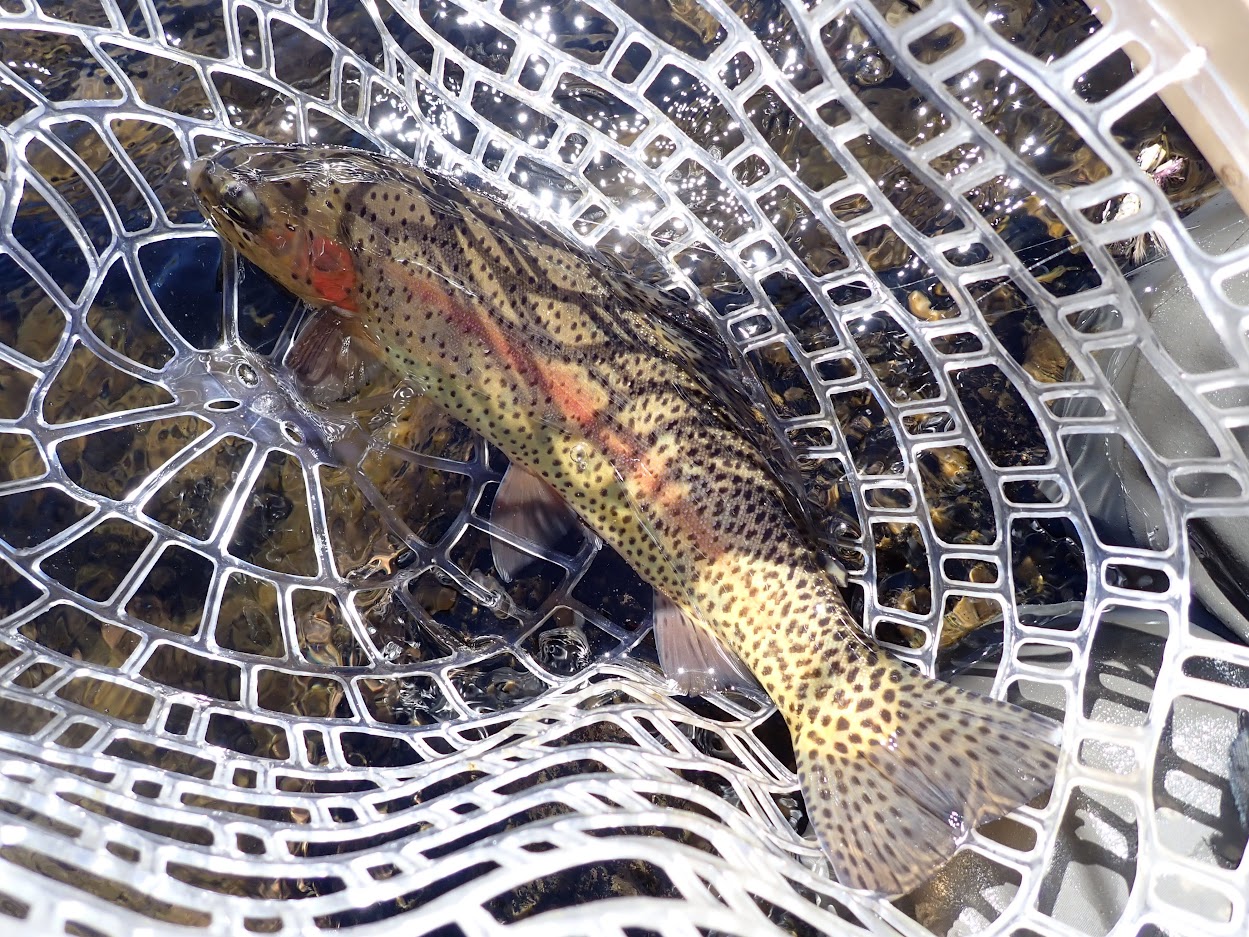 After lunch I moved the fish count steadily upward to ten, and surprisingly the tally was dominated by cutbows, and many were fine fish in the twelve to fourteen inch range. The landed fish were split between the salvation nymph and hopper, but it seemed that the larger cutbows snatched the salvation, as it began to swing or lift. When I reached ten, I rested on a that count for quite a while, and I attributed the lull to the stream structure, as I passed through a very high gradient section with minimal prime holding spots. 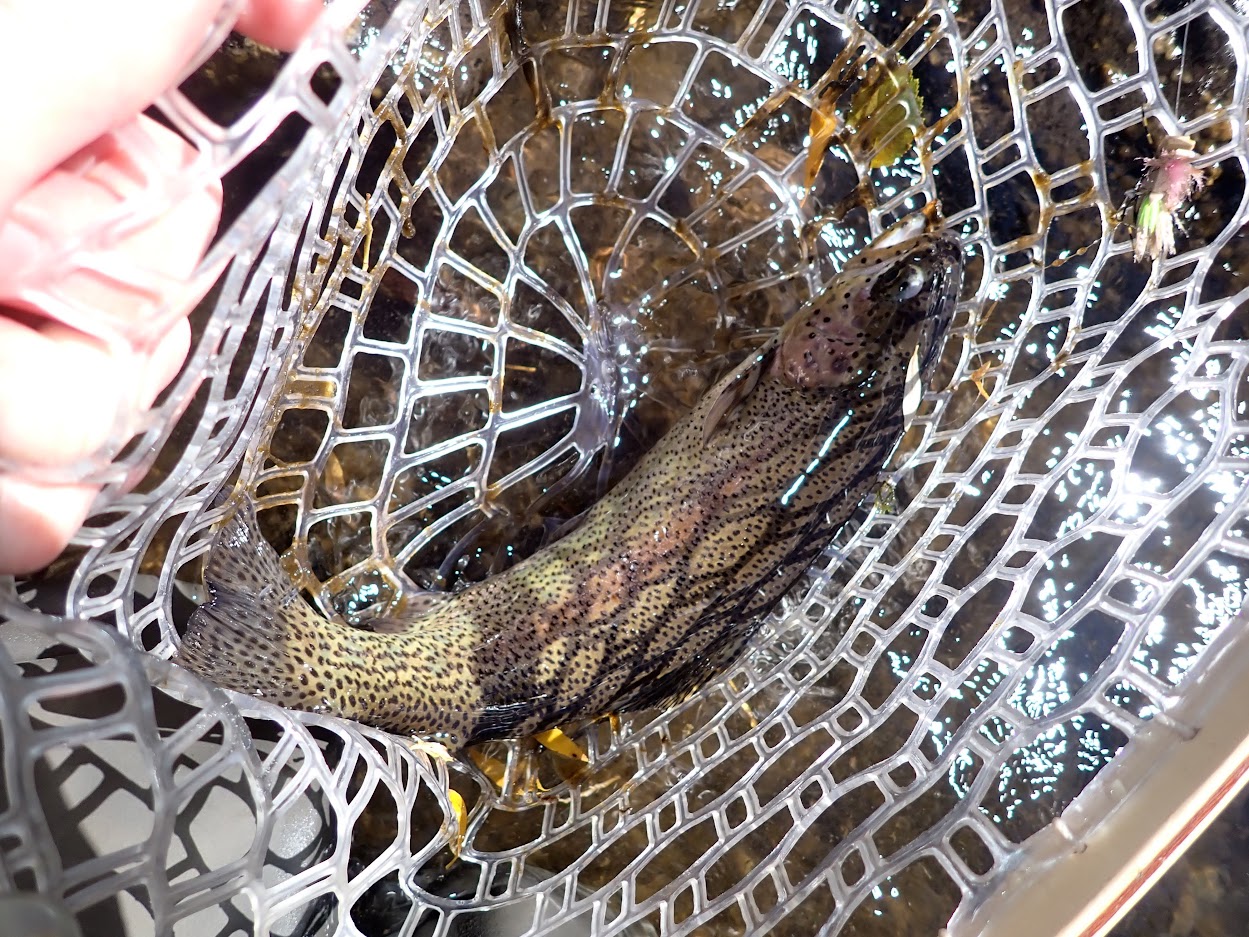 In order to counter the lack of action I added a second dropper fly, although the full length of the leader from the hopper to the point fly was only around two feet. In other words, my nymphs were drifting quite high in the water column. I cycled through an ultra zug bug and hares ear nymph, but the salvation and hopper performed the heavy lifting, as the fish count elevated from ten to seventeen. I continued to catch predominantly cutbows and rainbows, and I was very pleased with that result. I began to wonder, if the brook trout were already preoccupied with spawning. 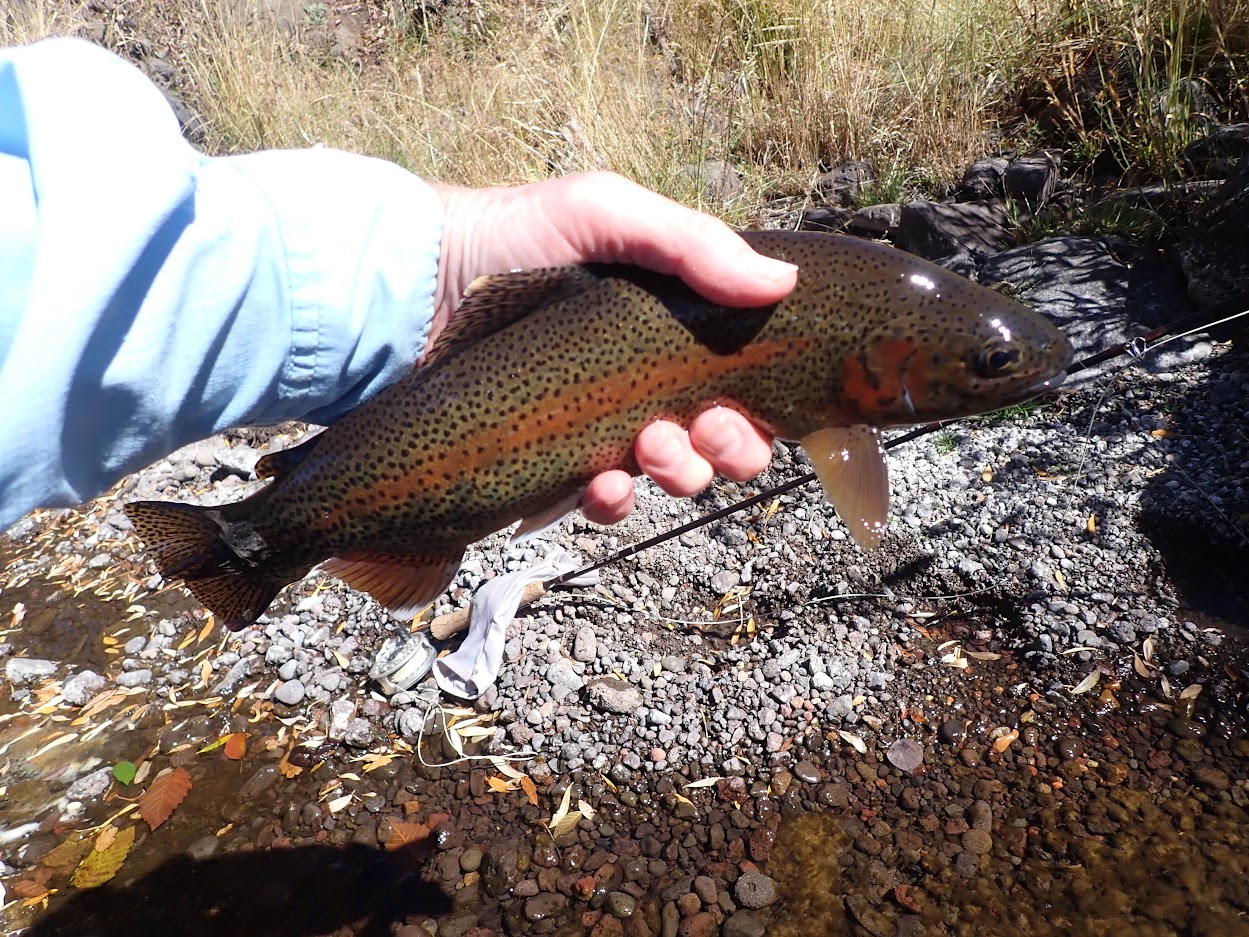 Seventeen became another unexpected plateau in the fish count graph. I was plagued by refusals, a couple foul hooked fish and some long distance releases. All these obstacles to netted fish forced me to reevaluate, and I decided to test a solo hippie stomper. The hippie stomper was a workhorse fly on September 16, so why would it not shine again on September 29? I cannot provide the answer to that question, but I can report that it was totally ignored in some very attractive runs and pockets, so I once again pondered my options. I was mired on seventeen fish, and I had a strong desire to reach twenty. 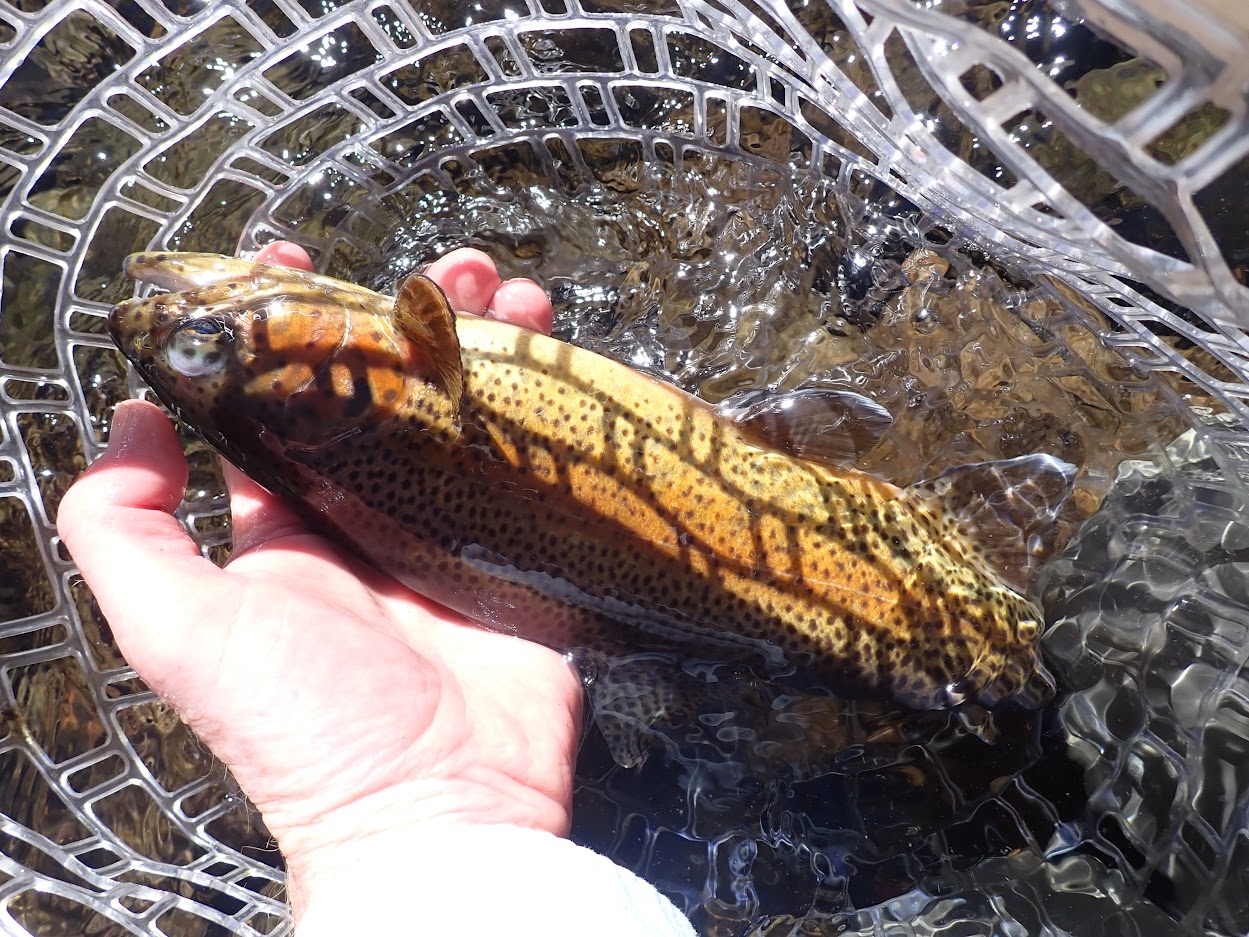 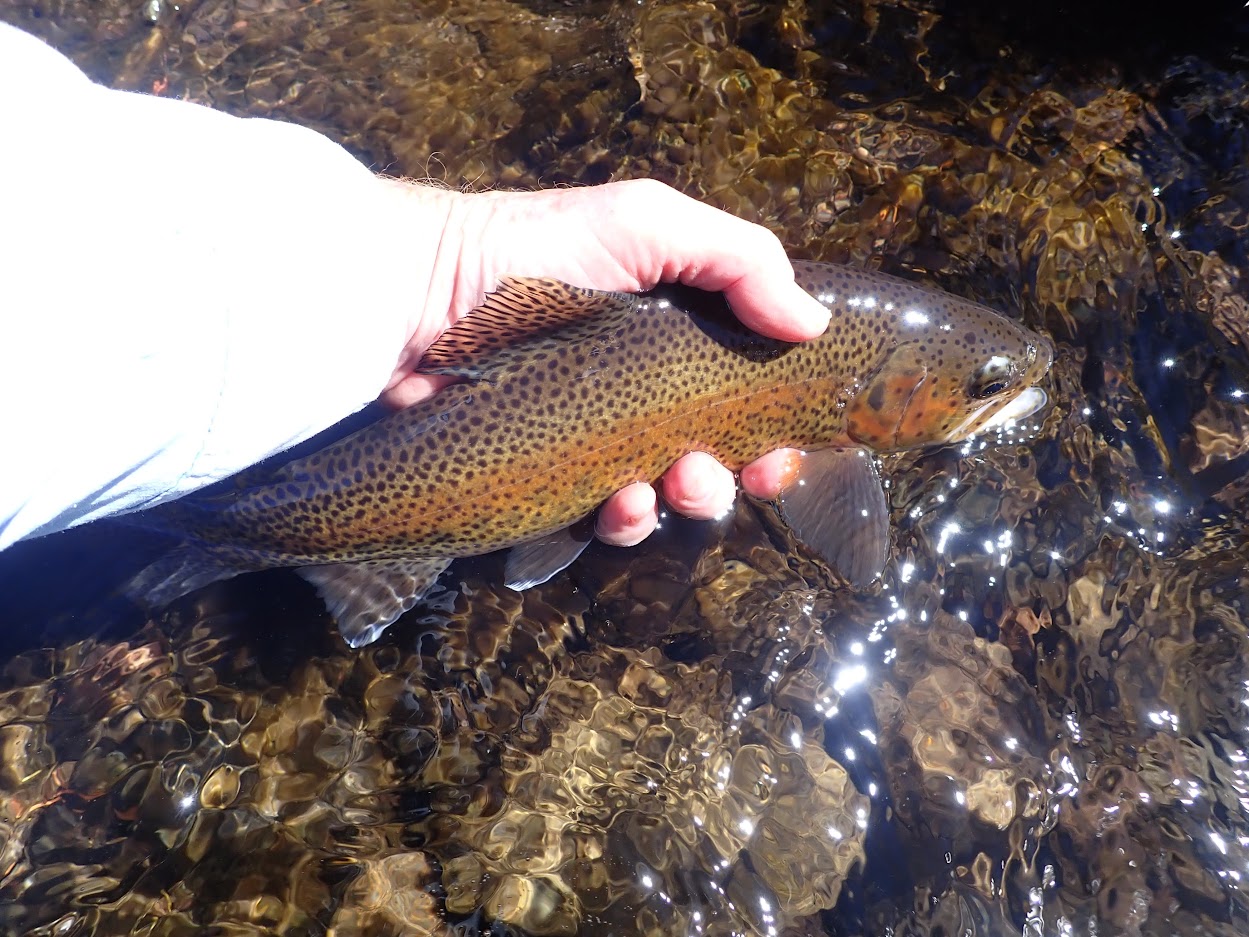 I decided to return to the dry/dropper approach; however, I configured my line with longer droppers and two nymphs. For this final push I chose a tan ice dub chubby Chernboyl to optimize visibility and floatation, and for the nymphs I attached an ultra zug bug as the top fly and a size 16 super nova as the point. The super nova is very similar in appearance to a pheasant tail. Hurrah! the combination saved the day, and before I halted my casts at 3:30, I boosted the fish count from seventeen to twenty-four. The chubby produced one aggressive brook trout, and most of the remainder favored the super nova. One or two grabbed the ultra zug bug to justify its position in my starting lineup. 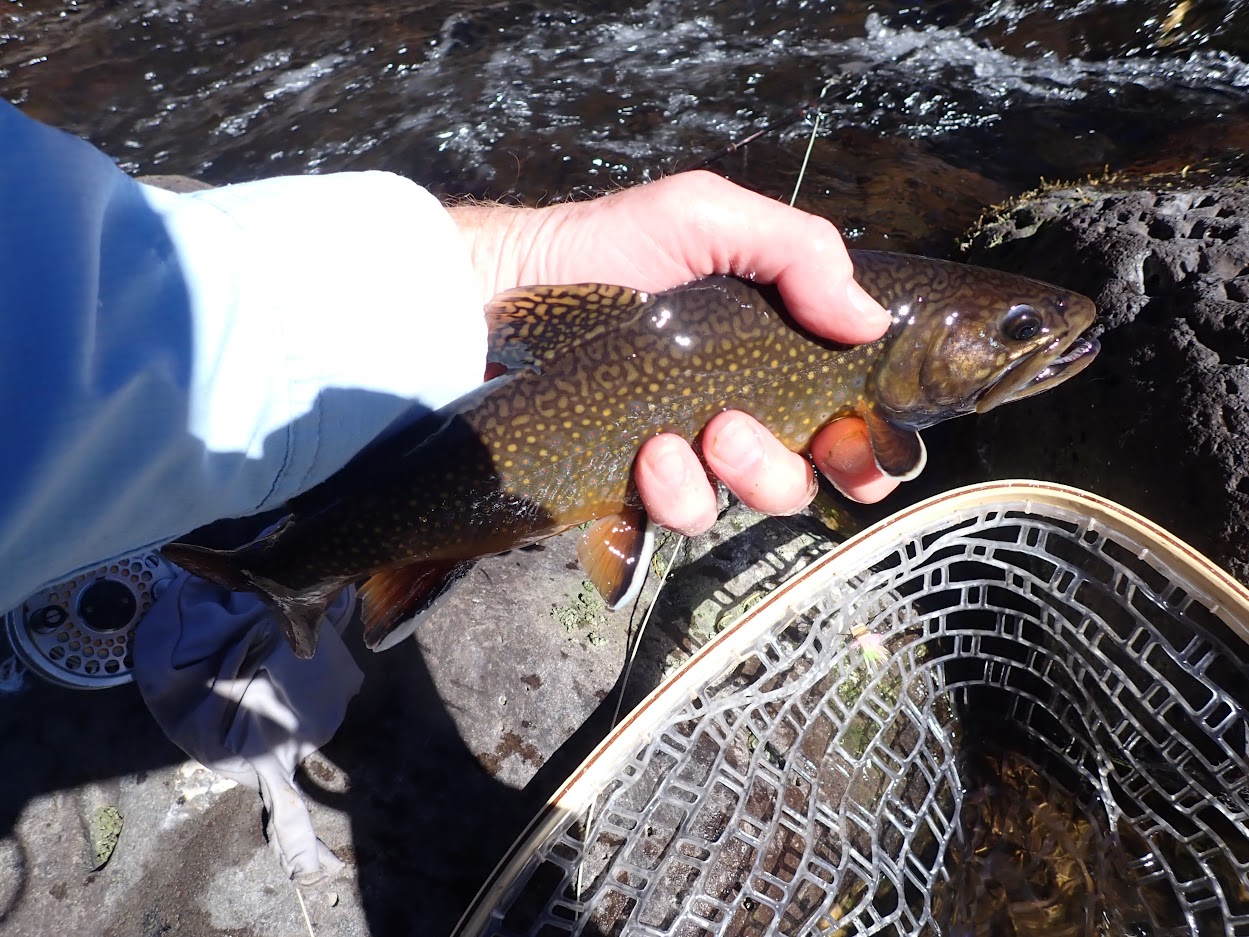 Very Nice for the Char Species

I had thirty minutes to return to the car to meet Jane, and I fell short of my anticipated destination for exiting the stream. This forced me to bushwhack through an evergreen stand, and I clumsily climbed over numerous deadfalls and up some fairly steep inclines, before I arrived at a fence. I was within viewing distance of the road, but I could not figure out how to negotiate the barbed wire fence. Finally I found a spot with barely adequate space to crawl beneath the bottom wire. I placed my wading staff and fly rod on the opposite side and then removed my backpack and frontpack and positioned them there as well. Before I dropped to my back to wiggle underneath, I noticed that the wooden post to which the fence was attached was connected to a metal stake by a wire loop. I was able to slide the loop upward, and this raised the wooden post and all the horizontal fence sections. I used my wading staff to prop up the wooden post and maintain the loop in the highest position and dropped to my back and slid to the other side. Once I was on the other side, it was easy to climb the short hill to the road, and then I strode back along the shoulder for a mile to my meeting place with Jane. I arrived a few minutes after 4PM! 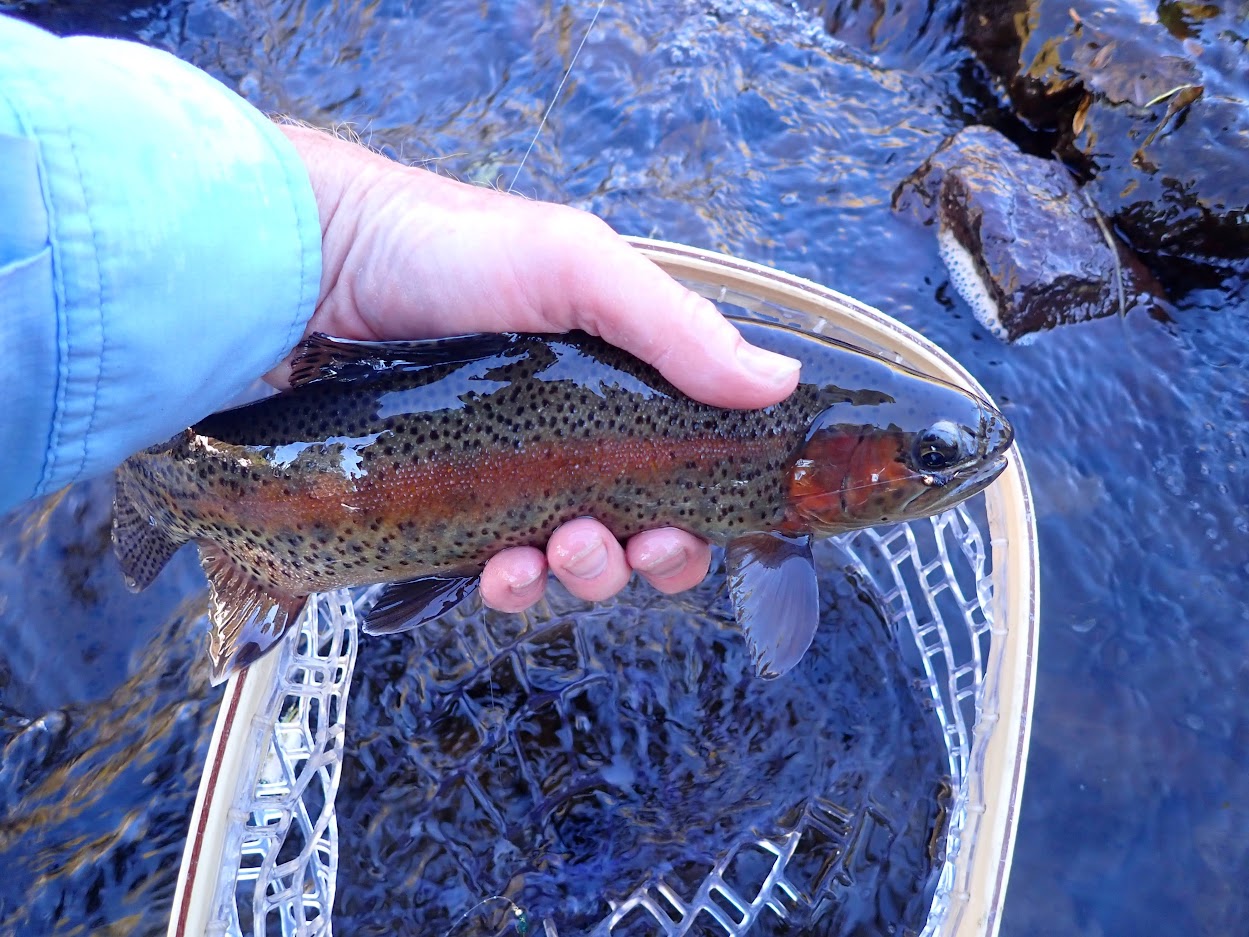 Twenty- four fish was a decent day, and 80% of the catch were cutbows or rainbows. For some reason the proportion of brook trout fell from the ratio I experienced two weeks before. I estimate that eight of the twenty-four were cutbows or bows in the twelve to fourteen inch range, and these were very substantial catches for a small waterway like the North Fork. The weather was gorgeous, the scenery was spectacular, and I managed to sneak in a bonus day of fishing in the Flattops in 2020. My legs are definitely stronger after four challenging back country hikes, and Jane and I experienced the 2020 foliage viewing season near its peak. 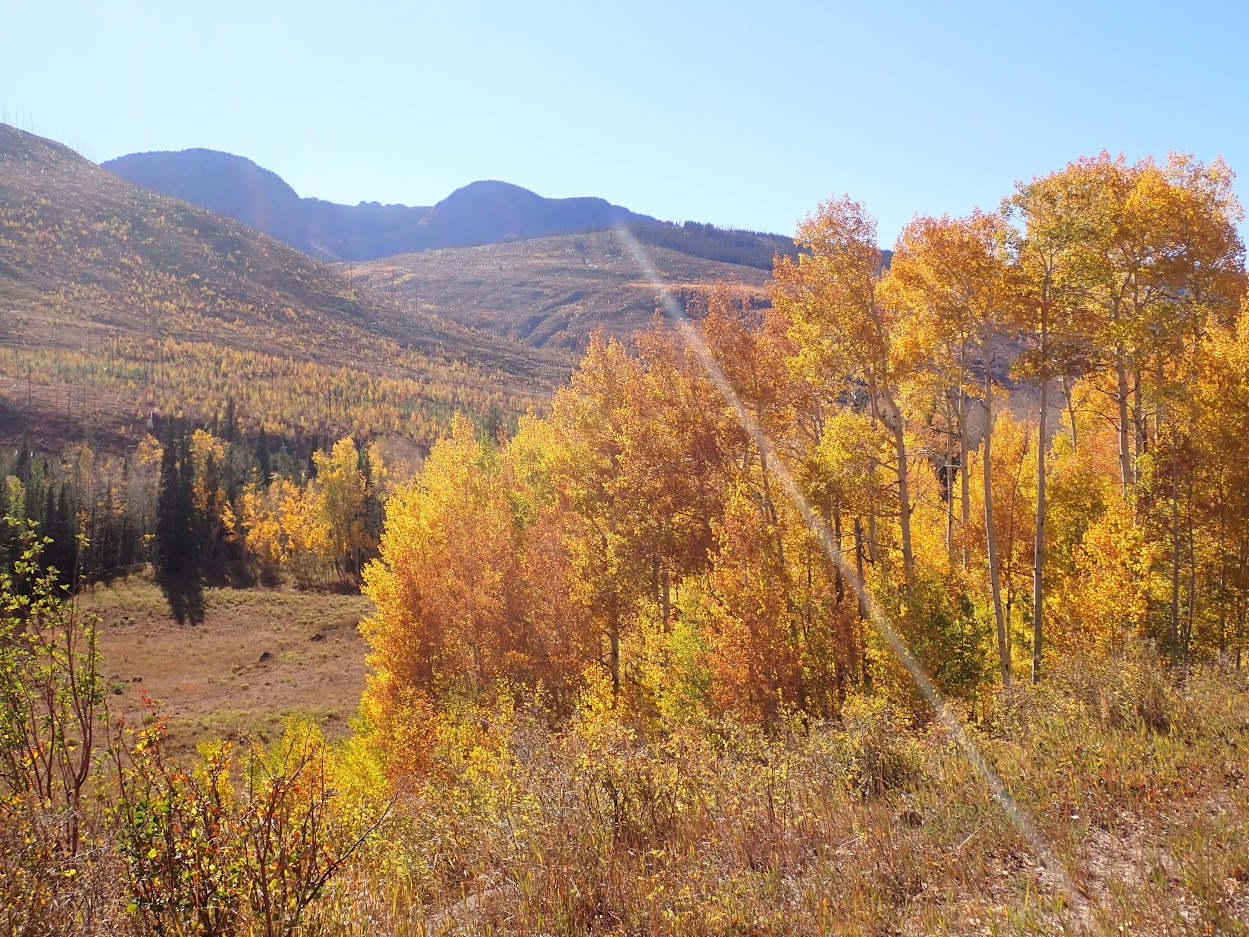 The Word Glow Comes to Mind