I was mildly disappointed with my day on Marvine Creek on Thursday, so I decided to remain in the Flattops to fly fish on Friday, but I committed to leave early. Early for this outing was defined as 2:00PM. Astute readers may ask how I could be disappointed with a thirty-one fish day, and that would certainly be a legitimate question. Twenty-eight of the thirty-one trout were small brook trout, and unlike previous visits, only one substantial cutbow rested in my net. My hugely successful day on Wednesday may have also influenced my view toward Thursday. On Marvine Creek I covered 1.1 mile of stream real estate, and the wading was quite challenging as a result of the high gradient and many streamside obstacles to impede my movement. Flies that worked on Wednesday failed to satisfy the trout on Marvine Creek, and this forced me to cycle through quite a few changes. I never settled on a reliable fly that produced consistent results.

I was quite weary from four consecutive days of fishing and camping including two lengthy hikes in excess of five miles, and I actually considered driving back to Denver after breaking camp on Friday morning. However, I was hesitant to squander valuable fishing time in the Flattops after making the four hour drive and bouncing over two passes on a gravel washboard road. I concluded that my advancing age dictated, that I should take advantage of my annual trip to leverage one more day in the area. 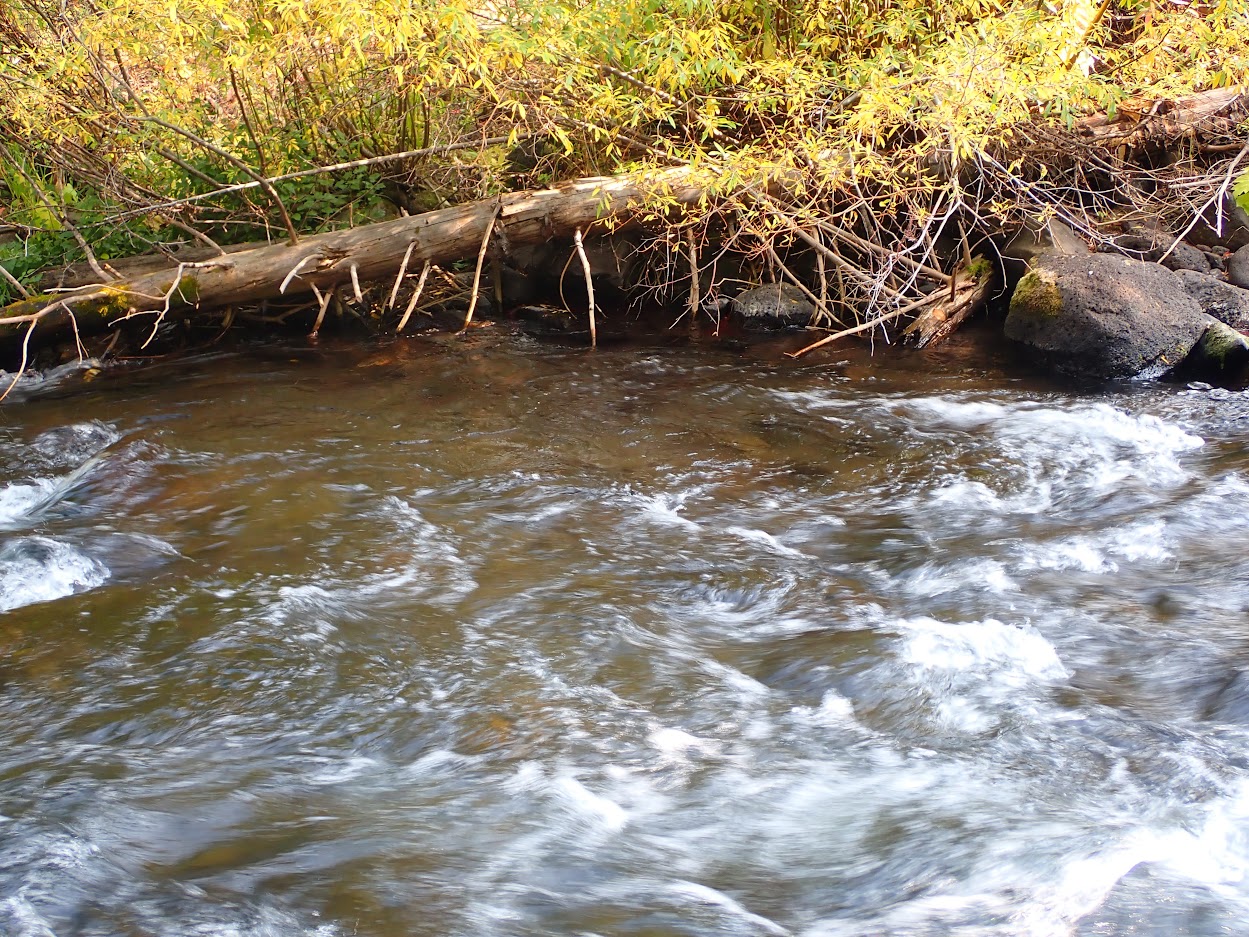 The temperature hovered around fifty degrees when I pulled into a parking spot at my chosen destination on Friday morning. I quickly assembled my Sage four weight and knotted a peacock hippie stomper to my line. The section of the North Fork that I chose as my destination differed from Wednesday, and after a brief hike I arrived at my starting point ready to cast by 10:00AM. The river was flowing at a nice velocity, and it was crystal clear. 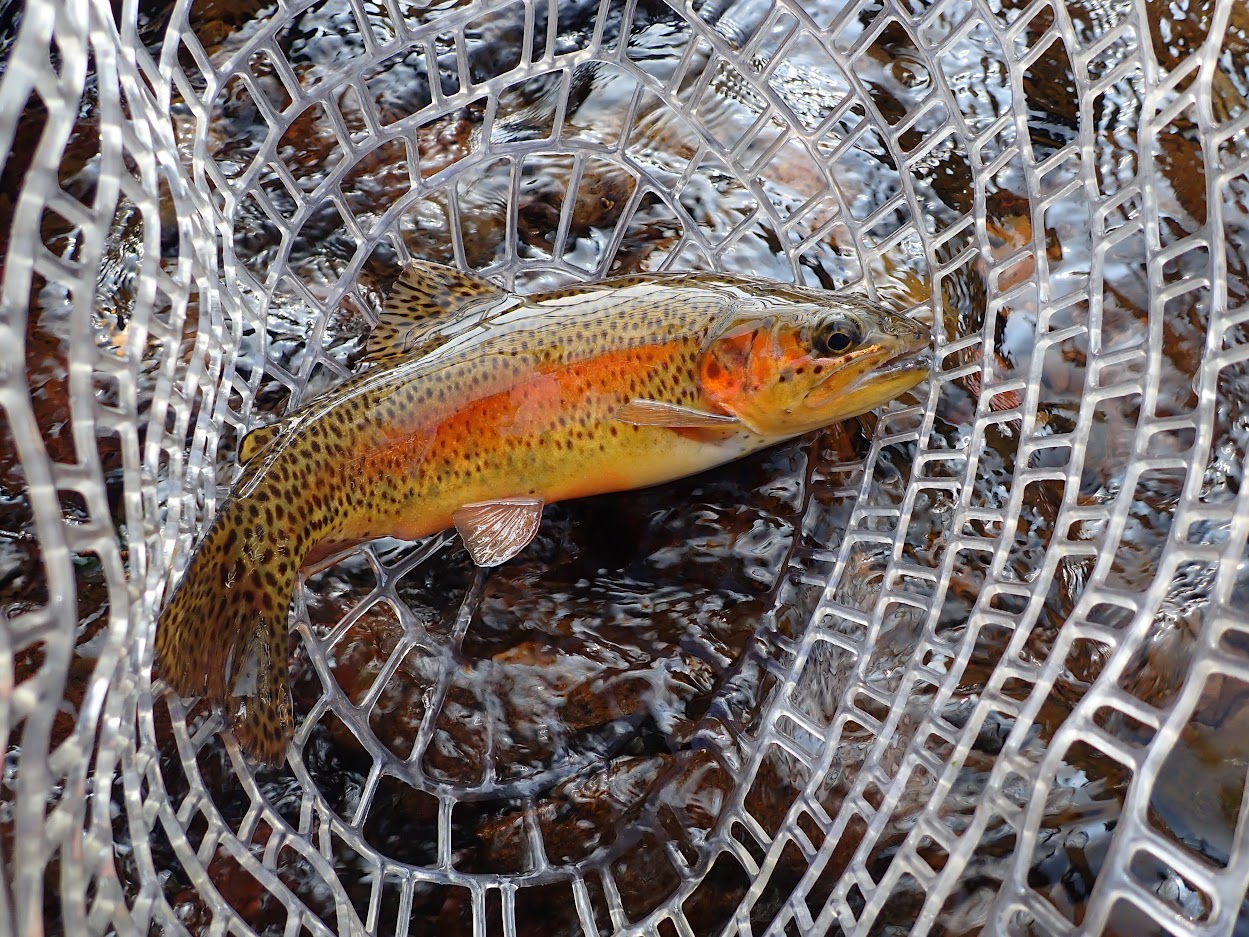 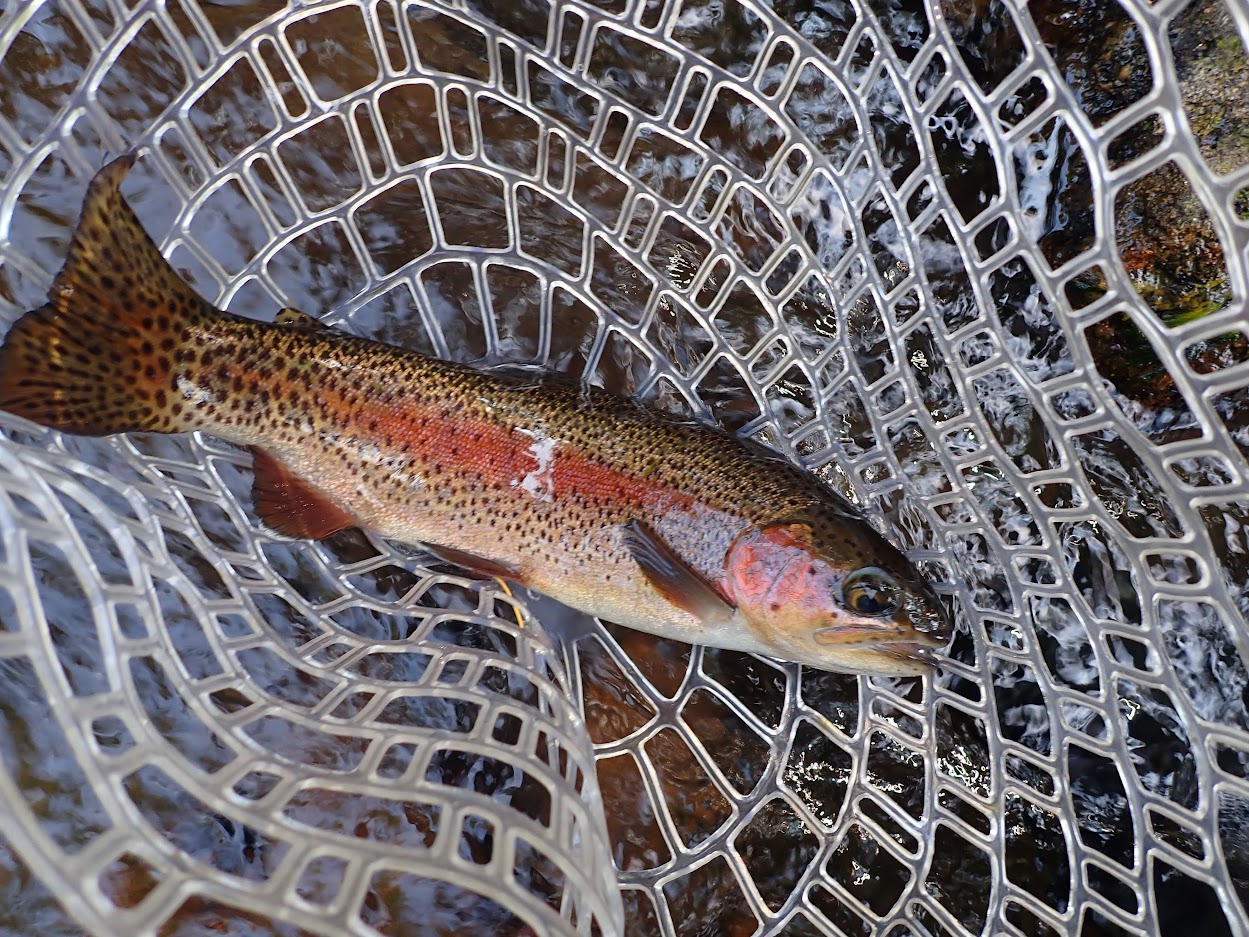 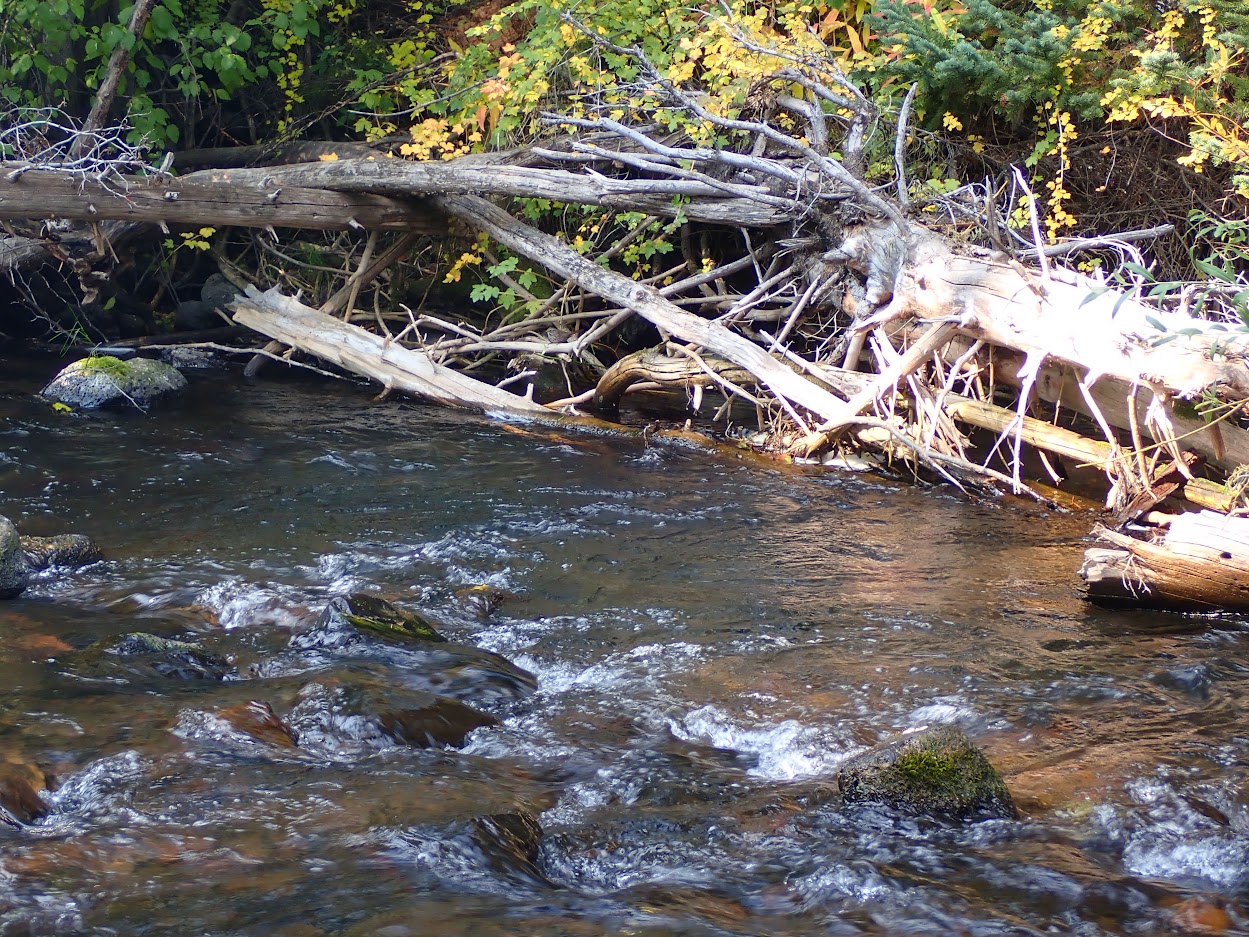 Trout Lair for Sure

I prospected with the hippie stomper for the first fifteen minutes, and nary a trout showed a sign of interest. This was the same creek, where I utilized a solitary hippie stomper for 6.5 hours, and it yielded in excess of forty fish, and now the residents shunned my offering like radioactive waste. What was going on? I pondered the situation and decided to test a three fly dry/dropper rig. I attached a tan pool toy hopper and then added an ultra zug bug and salvation nymph. The fish gave this move a thumbs up, and I began landing fish at a fairly rapid clip. The ultra zug bug and salvation were popular, but the hopper pattern also attracted a decent level of interest. Between 10:00AM and noon I expanded the fish count from zero to ten, and during this time I lost the salvation nymph and subsequently cycled through a beadhead pheasant tail nymph, a perdigon, a dark cahill wet fly, and a copper john. For the top nymph I swapped the ultra zug bug for a bright green go2 caddis pupa for a portion of the time. The salvation, ultra zug bug, go2 caddis and pool toy hopper delivered fish; and, in fact, the hopper was clearly the most desirable food item on the fly menu. Initially the predominant species was the brook trout, but then a few rugged cutbows and rainbows joined the party. These wild jewels were aggressive fighters and brilliantly colored, and they measured between twelve and fourteen inches. 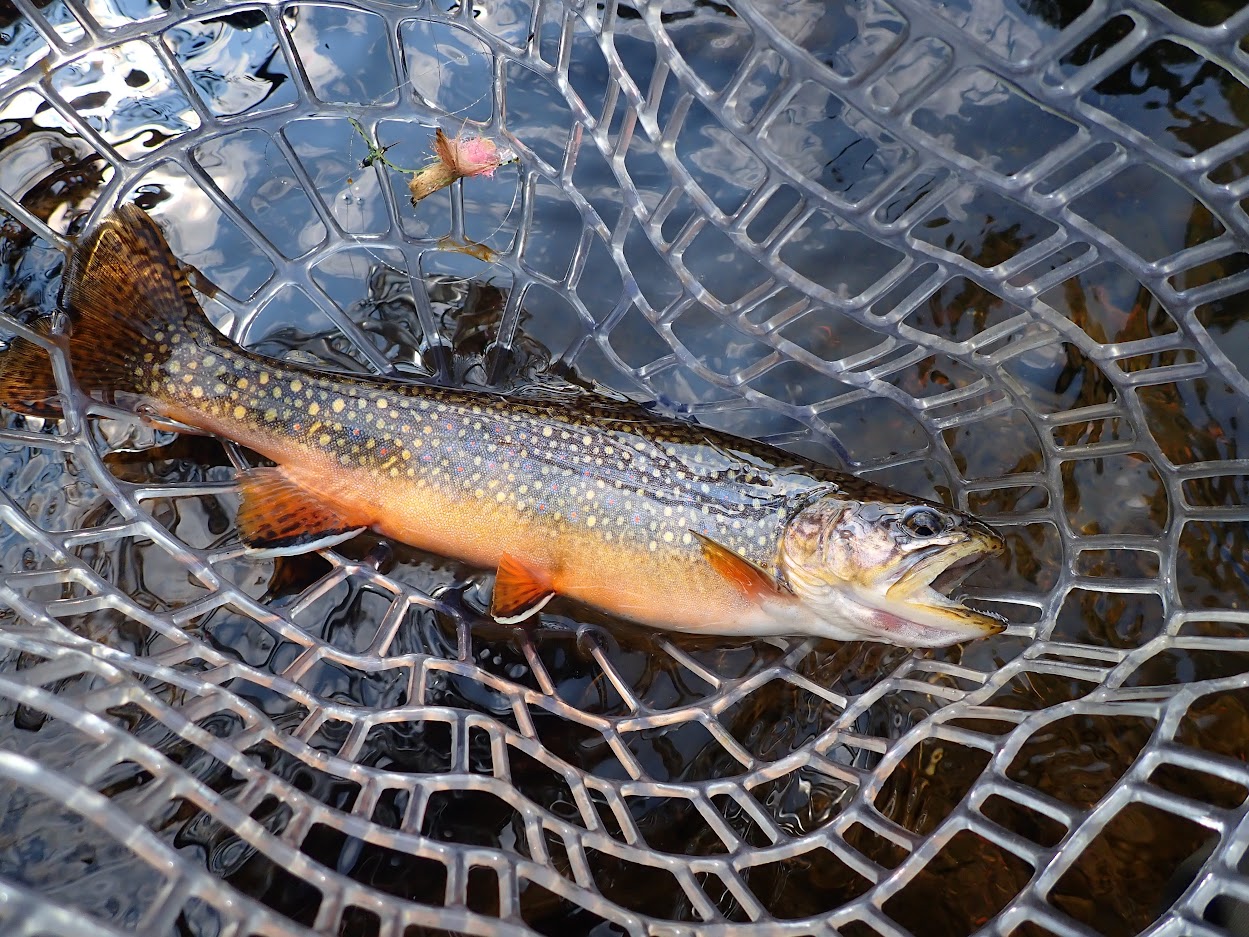 After a quick lunch I continued my upstream migration and landed a few more trout before a bruiser of a cutbow snapped off the trailing nymphs in the process of attempting an escape. I managed to coax the fly theft into my net, but rather than replacing the nymphs with another set, I opted to fish the hopper solo. The move proved to be brilliant, and I spent the remainder of my time on the river fooling brook trout, cutbows and rainbows with the Grillos pool toy hopper with a tan body. I set a goal of reaching twenty fish by 2:00PM and surpassed that with room to spare at twenty-five. Even more satisfying was the fact that these fish were not small brook trout. They were muscular fighters that displayed vivid and deep colors, and they typically measured between twelve and fourteen inches, and they carried greater than average body weight. I used two pool toy hoppers in the process, as the first one lost all its legs, and the same fate awaited the second. I was perched on twenty-three, when hopper number two lost its final leg, but I continued with the legless version and duped two additional fish. 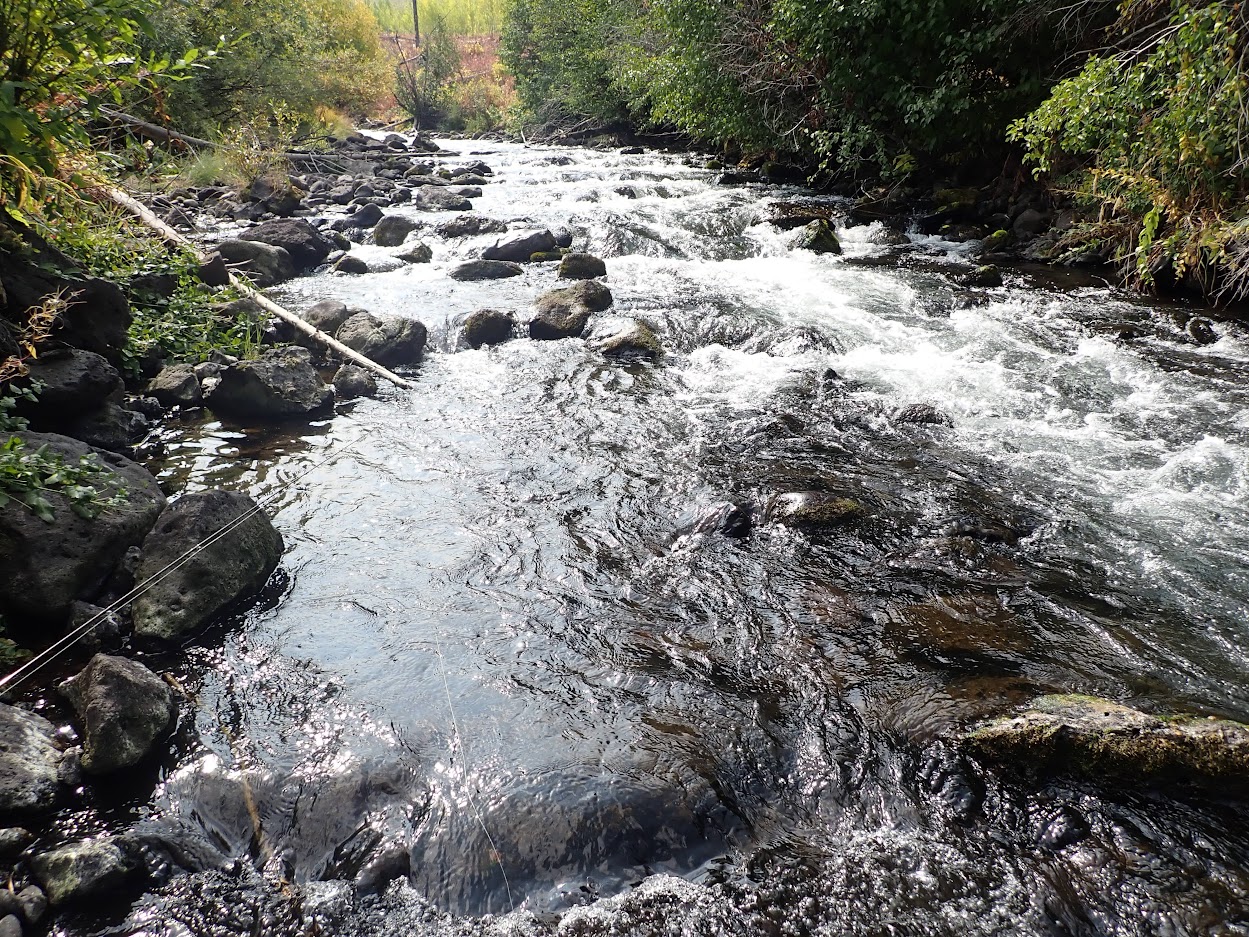 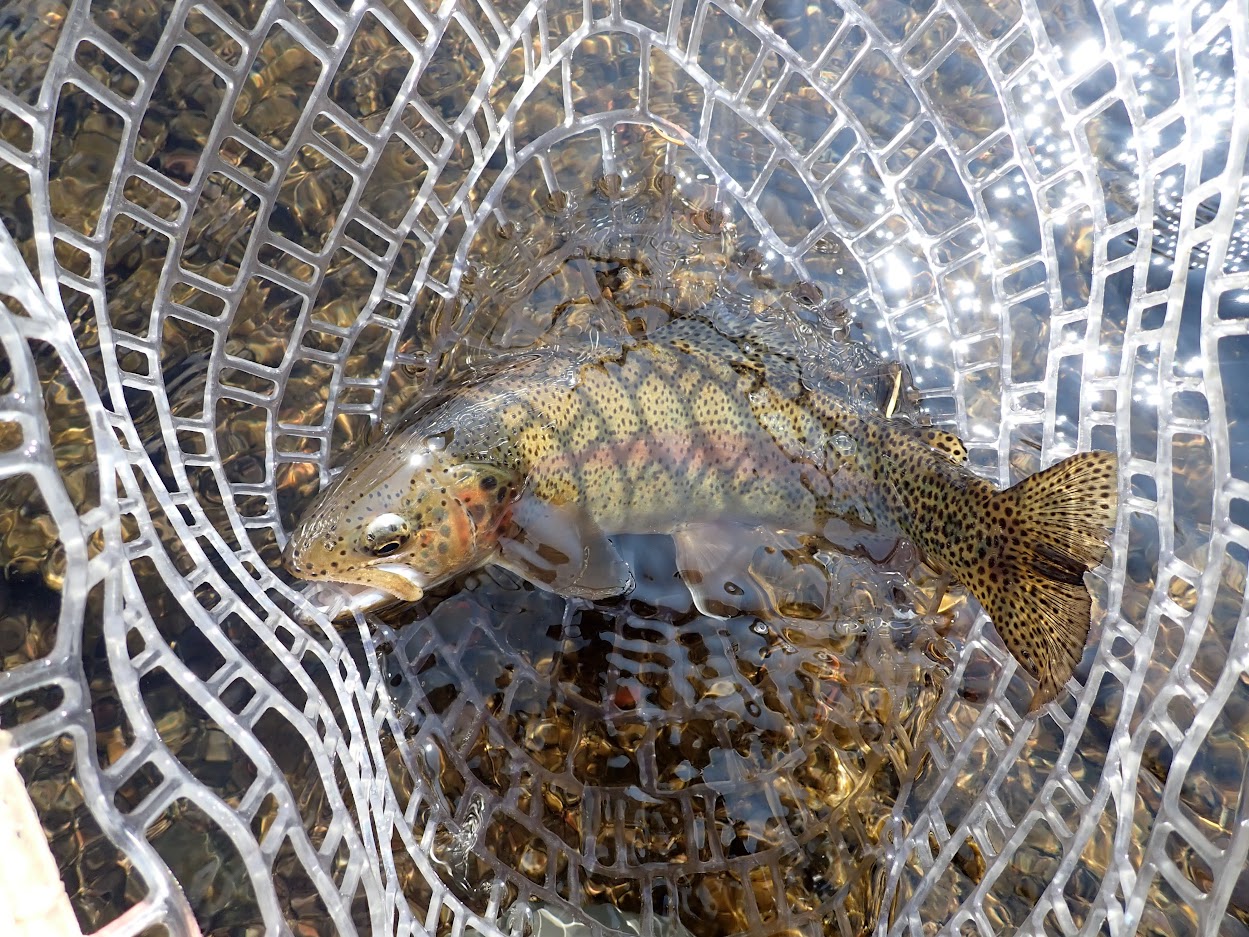 For the most part the brook trout occupied secondary lies such as shallow slow moving pools next to the bank. The cutbows and rainbows held at the tail of deep runs and pockets next to higher velocity current. Normally I limit my number of casts to five, before I move on to the next promising spot, but on Friday I recall several instances, where I made between five and ten casts, before I ultimately encouraged a take from one of the prized cutbows. 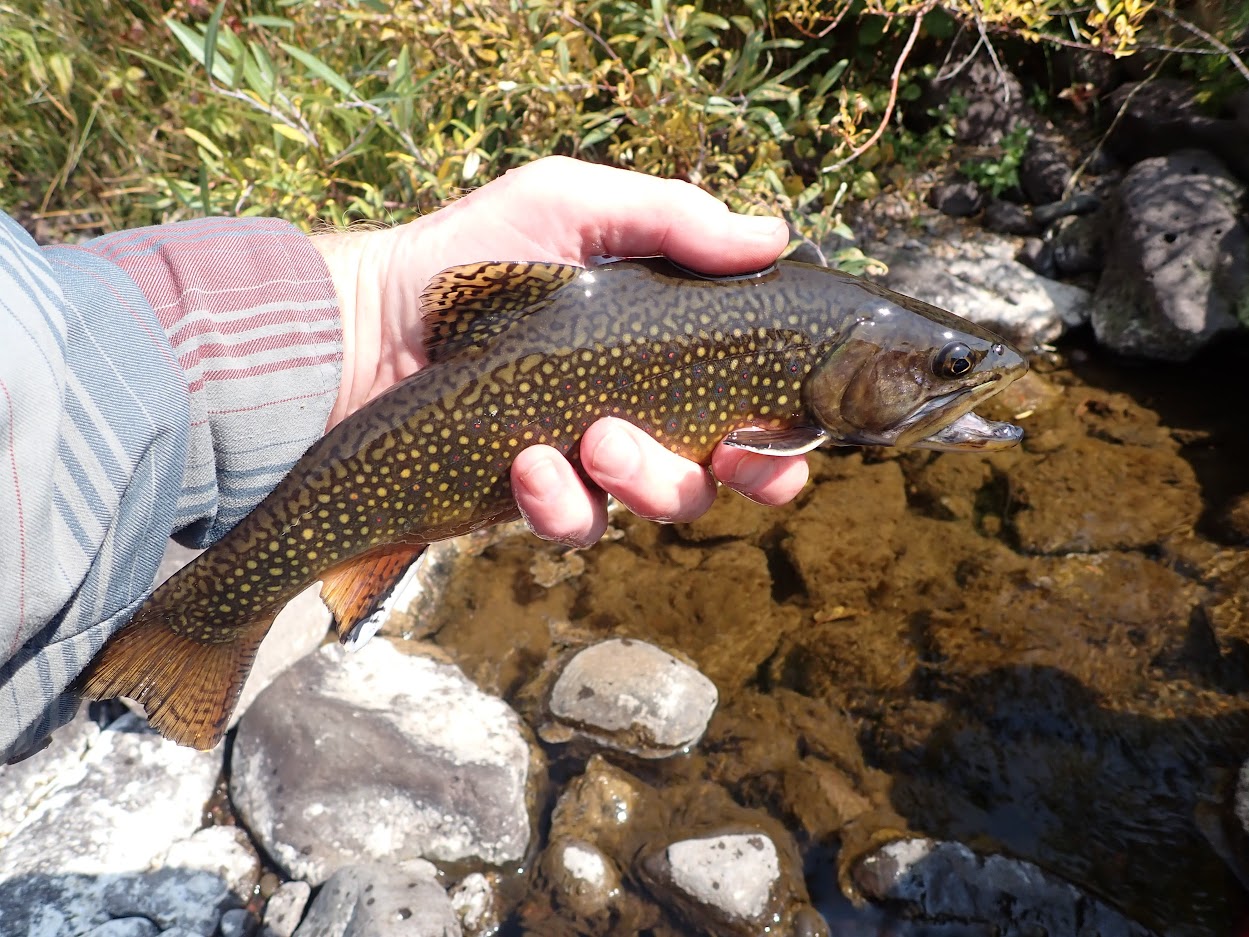 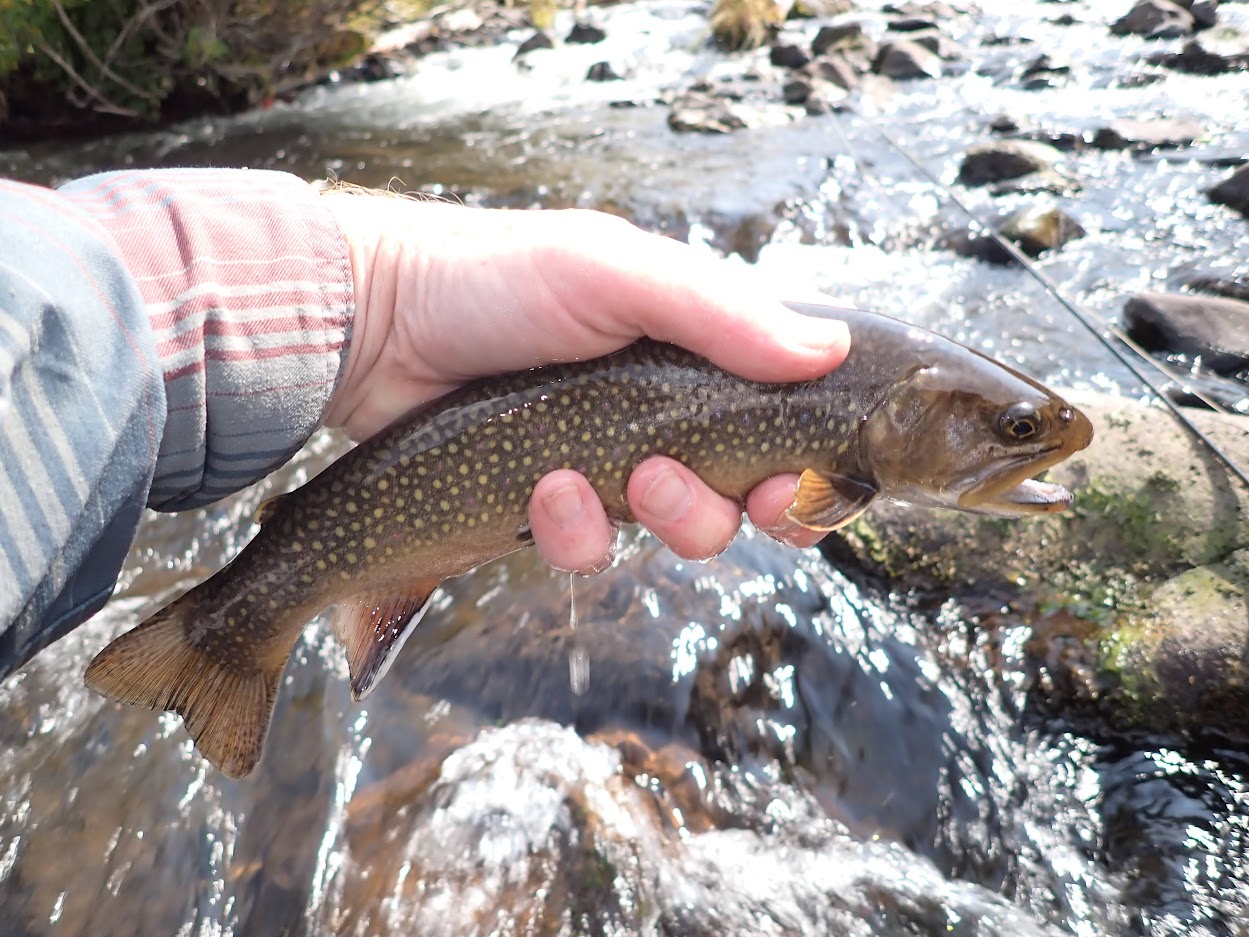 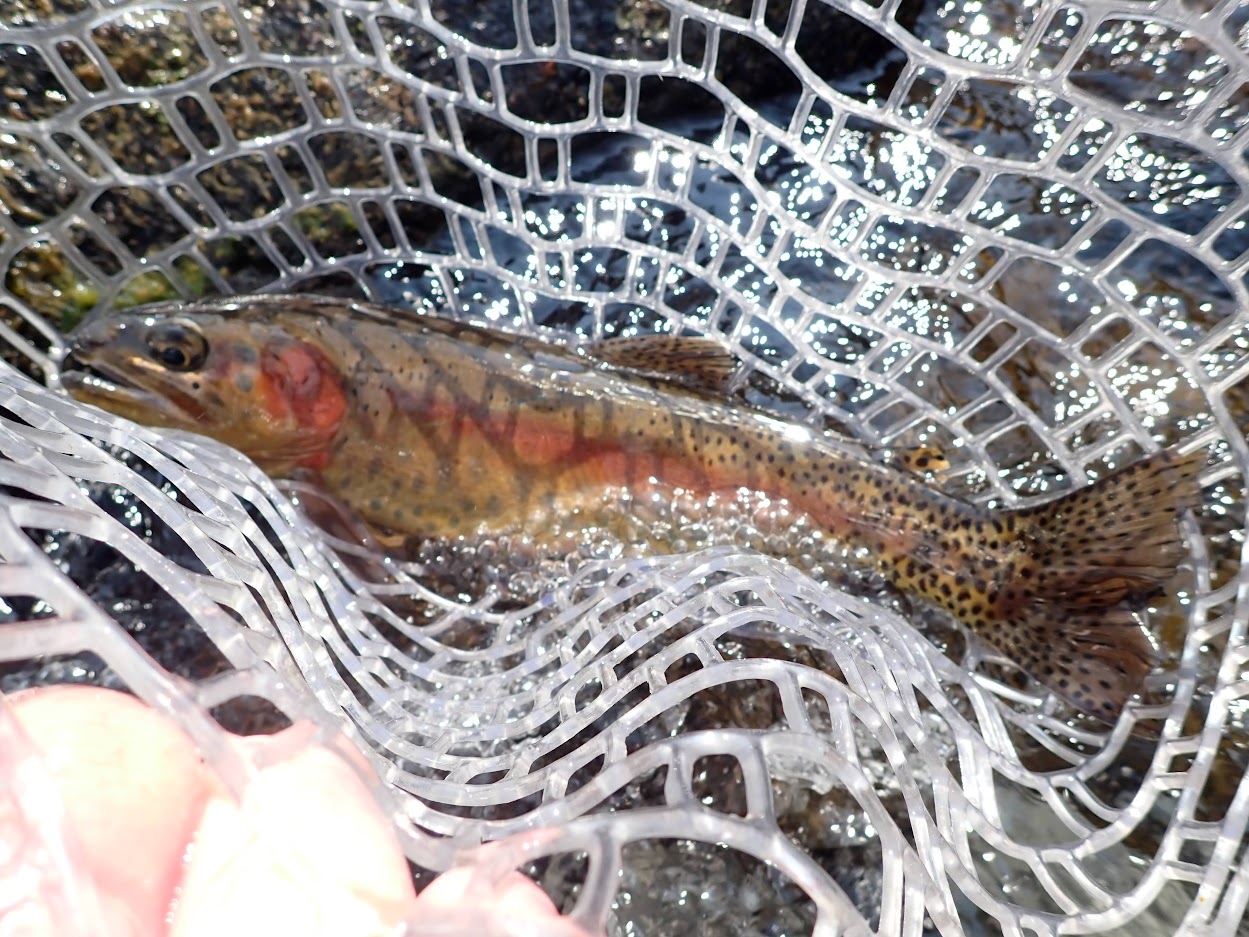 Such a Gorgeous Fish

Friday on the North Fork of the White River was truly a memorable day. Clearly forty-seven landed trout on Wednesday on the North Fork was a high mark, but I truly believe that I would have surpassed that achievement with another 2.5 hours on the Friday section. But more impressive was the higher proportion of larger cutbows and rainbows compared to Wednesday. I estimate that 60% of the Friday catch was one of the bow varieties, while brook trout were more than 50% of Wednesday’s netted fish. For an avid fly fisherman like myself, it does not get much better than Friday. I worked upstream at a steady pace and popped the single hopper to all the likely holding spots. More often than not a spectacular brook trout, cutbow, or rainbow jumped on the fake hopper. It was fly fishing at its simplest level. I gave little thought to fly selection, after I discovered the appeal of the pool toy hopper, and the size 8 foam impostor was easy to track among the swirls and churning current of the high gradient stream. Of course, I witnessed my share of refusals and temporary connections, but the conversion rate to landed trout was enough to give me confidence in the pool toy. When can I return to the Flattops? 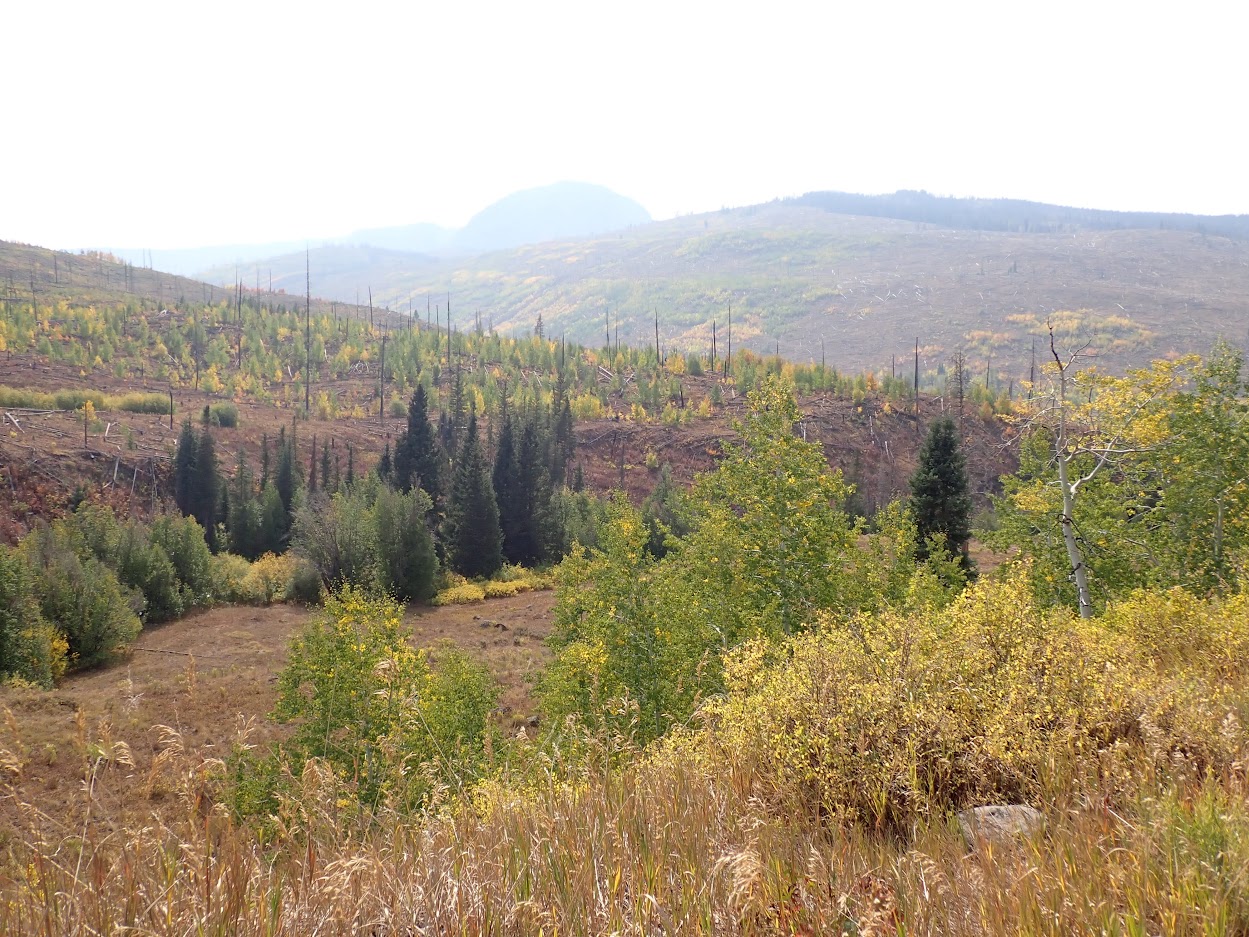