Wednesday left no room for disappointment. If one could project a nearly perfect day of fly fishing in a high country stream, Wednesday would serve as a superb model. 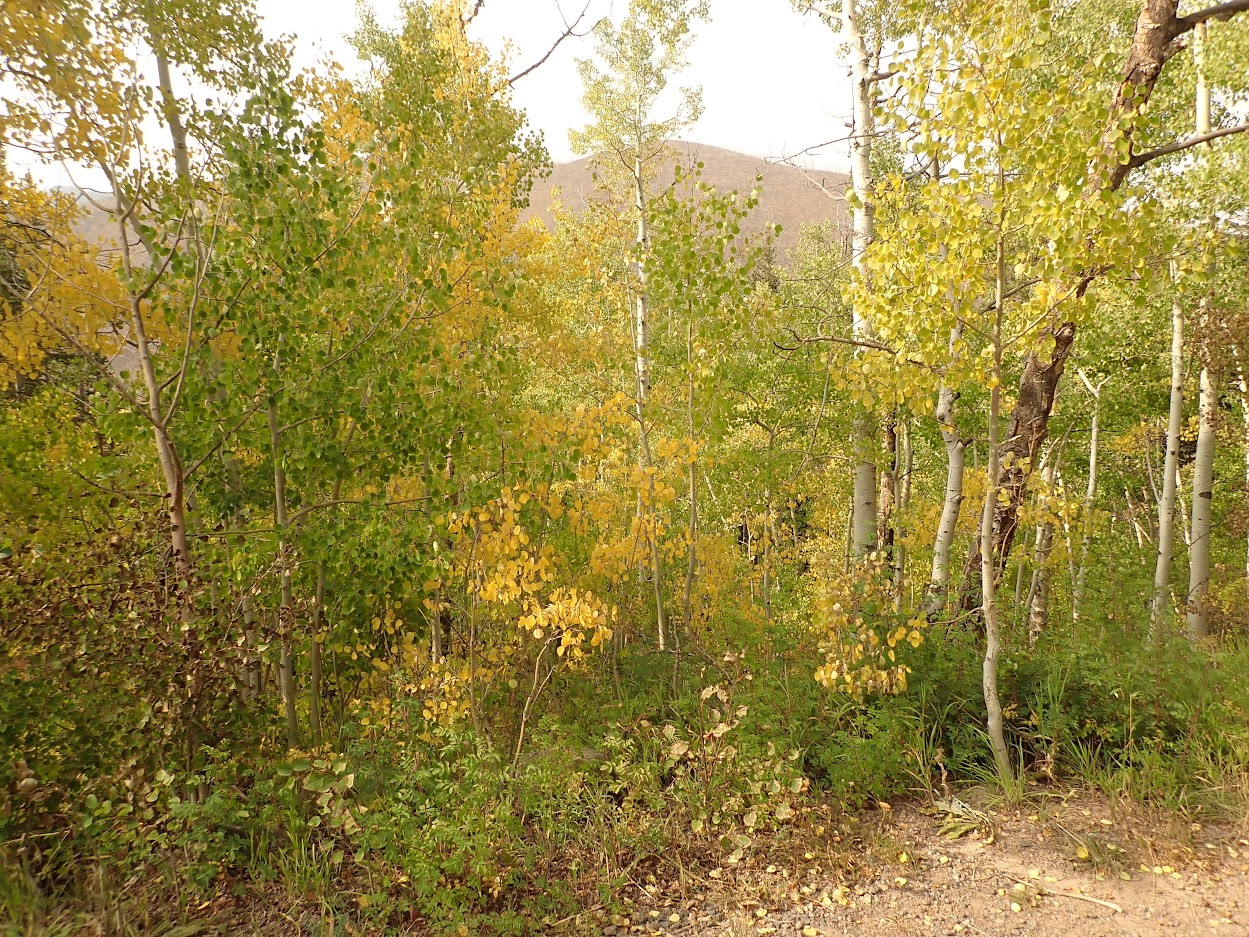 The Leaves in Transition

Tuesday was a long day, as I fished the South Fork and then drove to the North Fork Campground and set up my tent for three nights. On Wednesday morning I was situated close to the streams that I planned to fish for the remainder of the week. The air temperature began in the low fifties and then climbed to the upper sixties. A smokey haze blocked the sun for the entire time on the river. Flows on the section of the North Fork, that I chose to fish on Wednesday, were clear and at an ideal level. Wading, as is always the case for the North Fork, was challenging due to the numerous fallen logs to climb over, and the rocky, high gradient environment added to the difficulty. 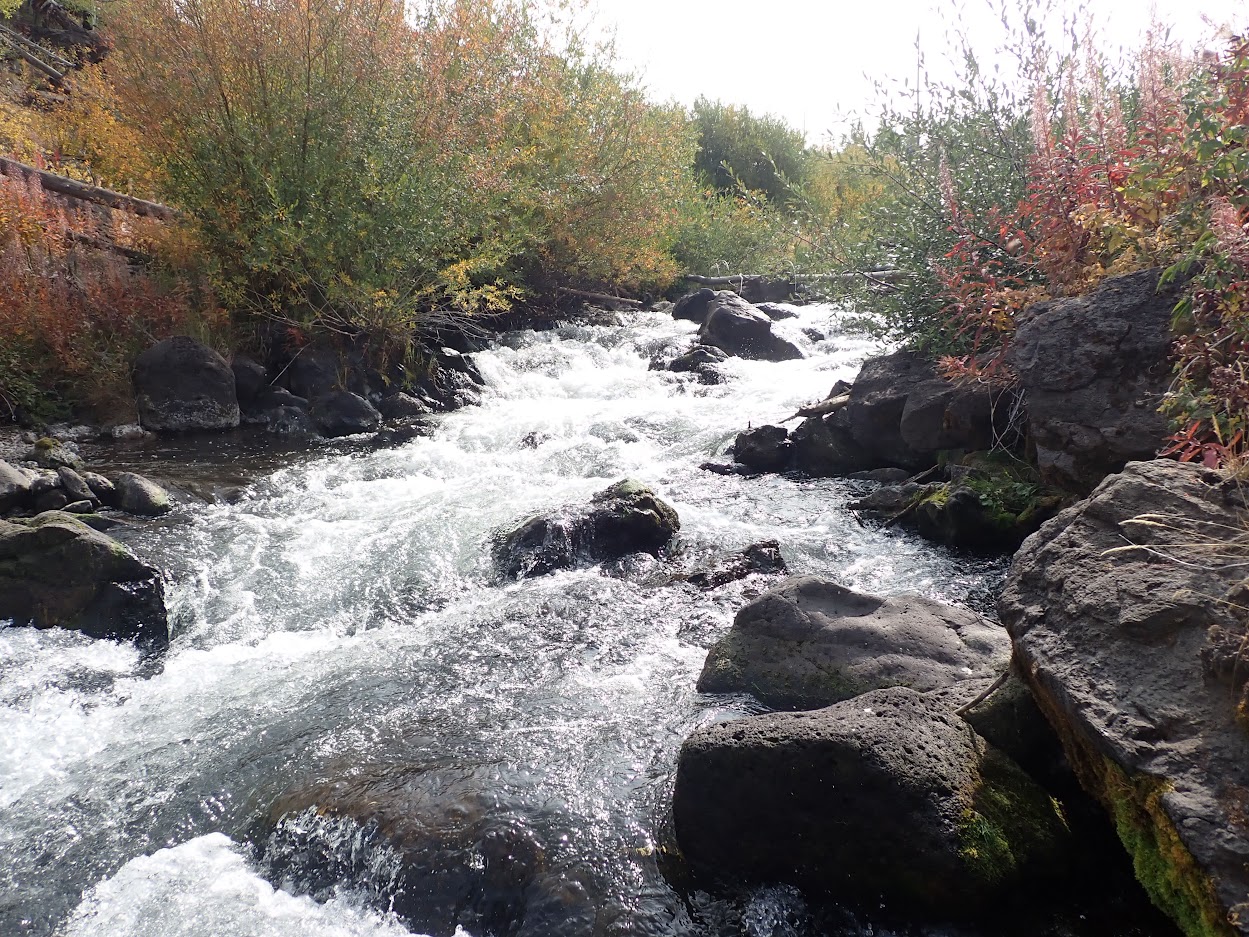 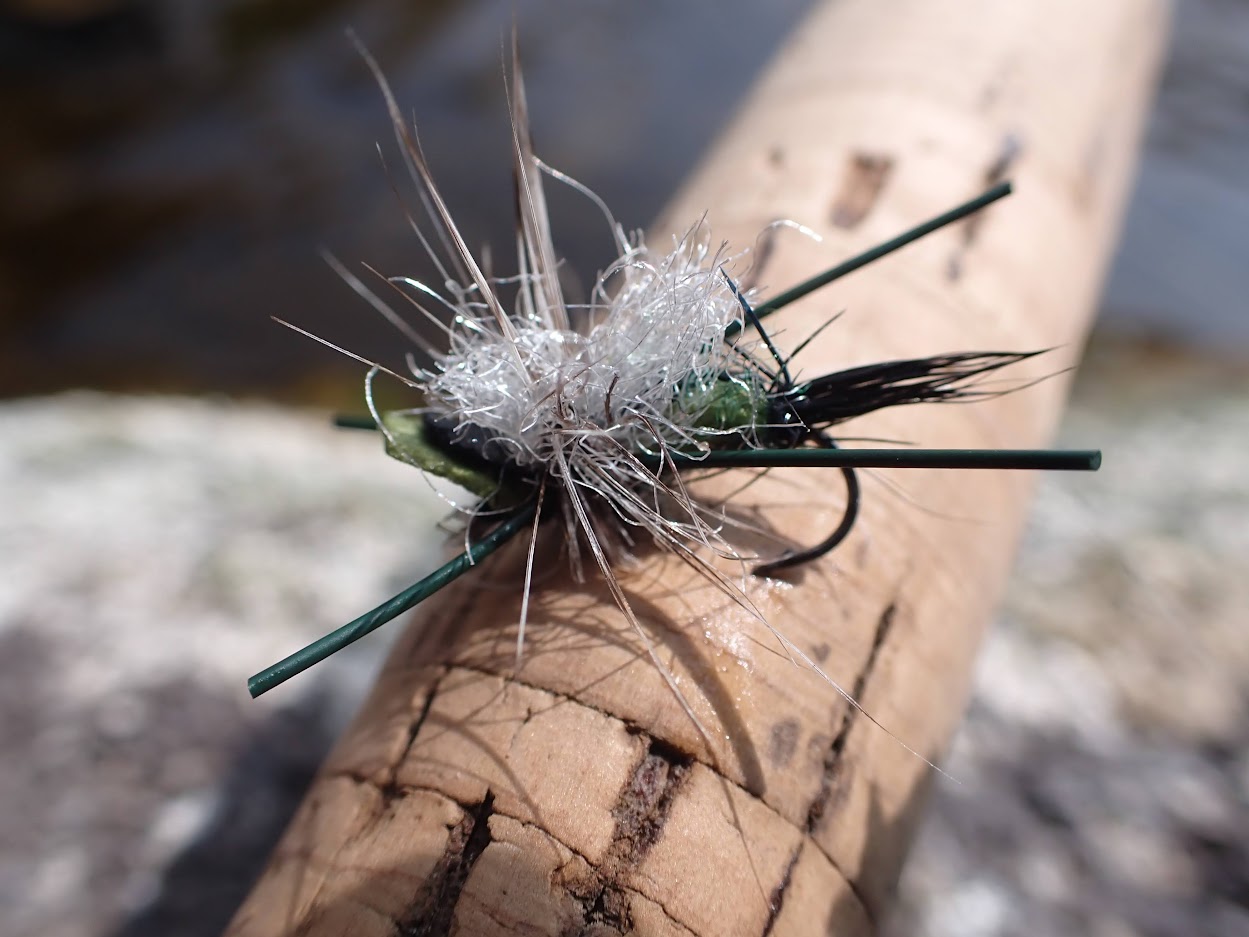 When I arrived along the edge of the river, I decided to keep it simple and knotted a peacock hippie stomper to my line. How was I to know that September 16th was destined to be a hippie stomper sort of day?The stomper quickly accumulated eight landed fish in the first thirty minutes. One was a fine thirteen inch cutbow, and the others were brightly colored brook trout. 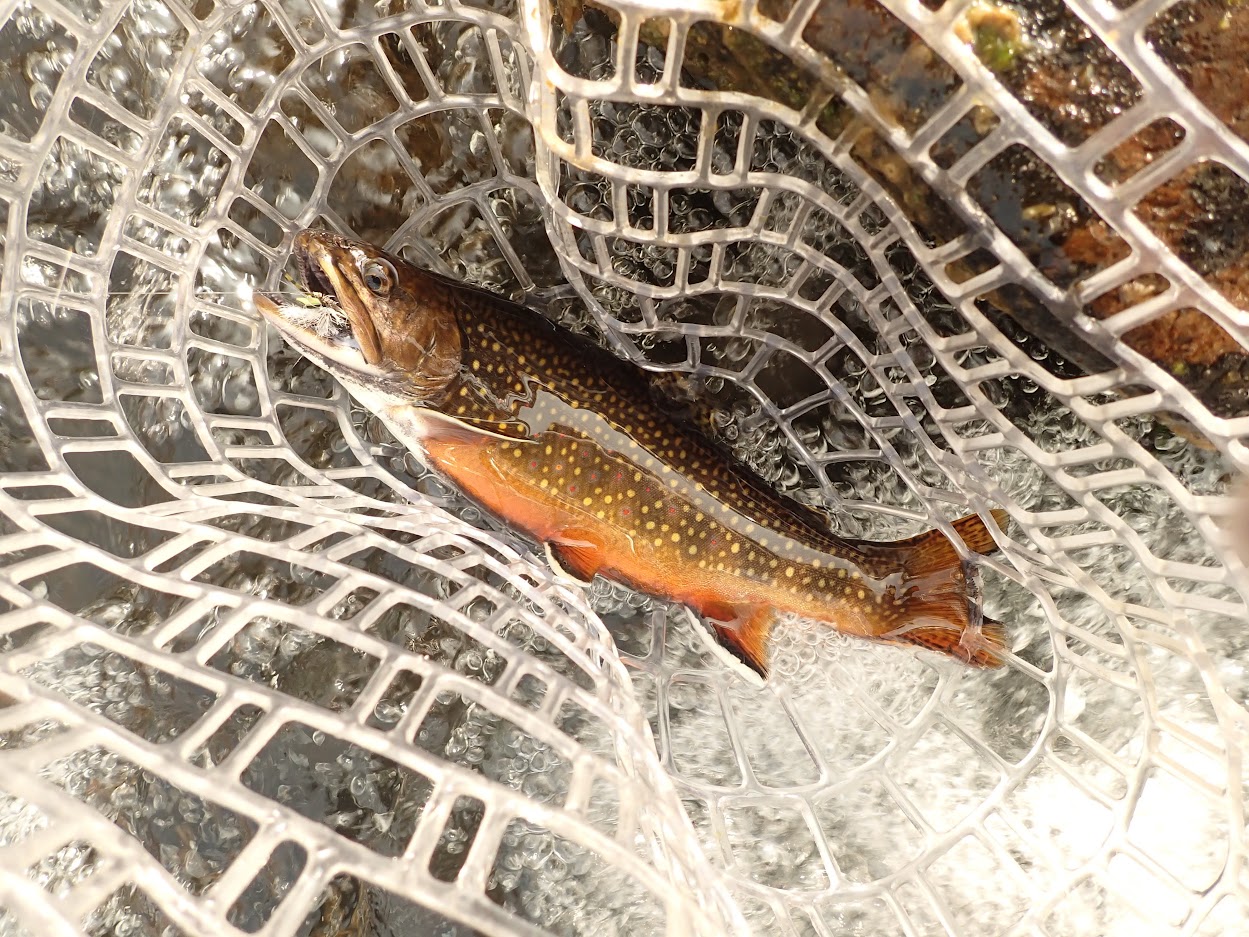 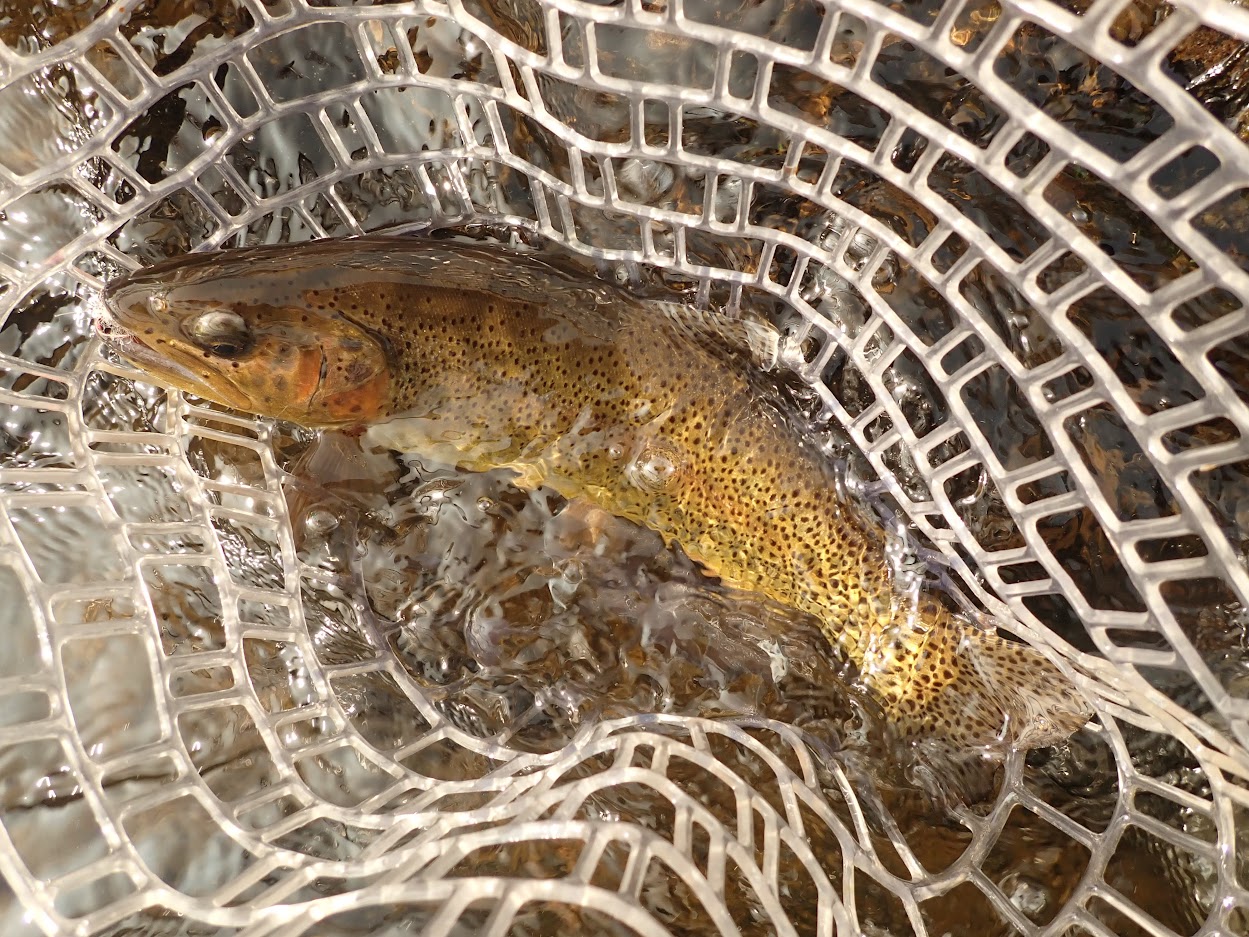 My description of the first half hour aptly defines my entire day on the river. I prospected all the deep pockets and plunge pools, and more often than not a cutbow, rainbow or brook trout subsequently rested in my net; but for every fish landed, I experienced a refusal or temporary connection. Obviously that represents an abundant quantity of fish in a small stream environment. 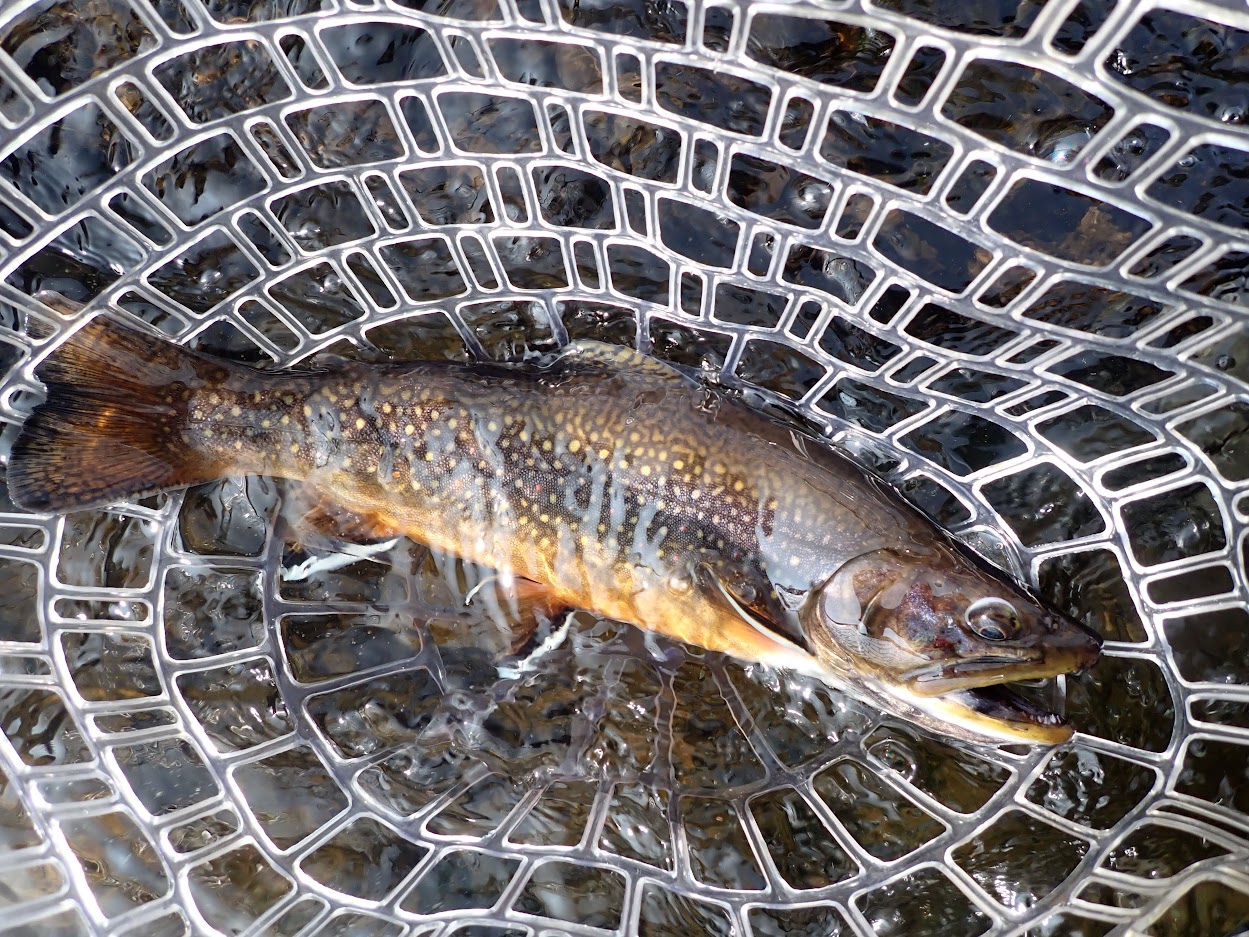 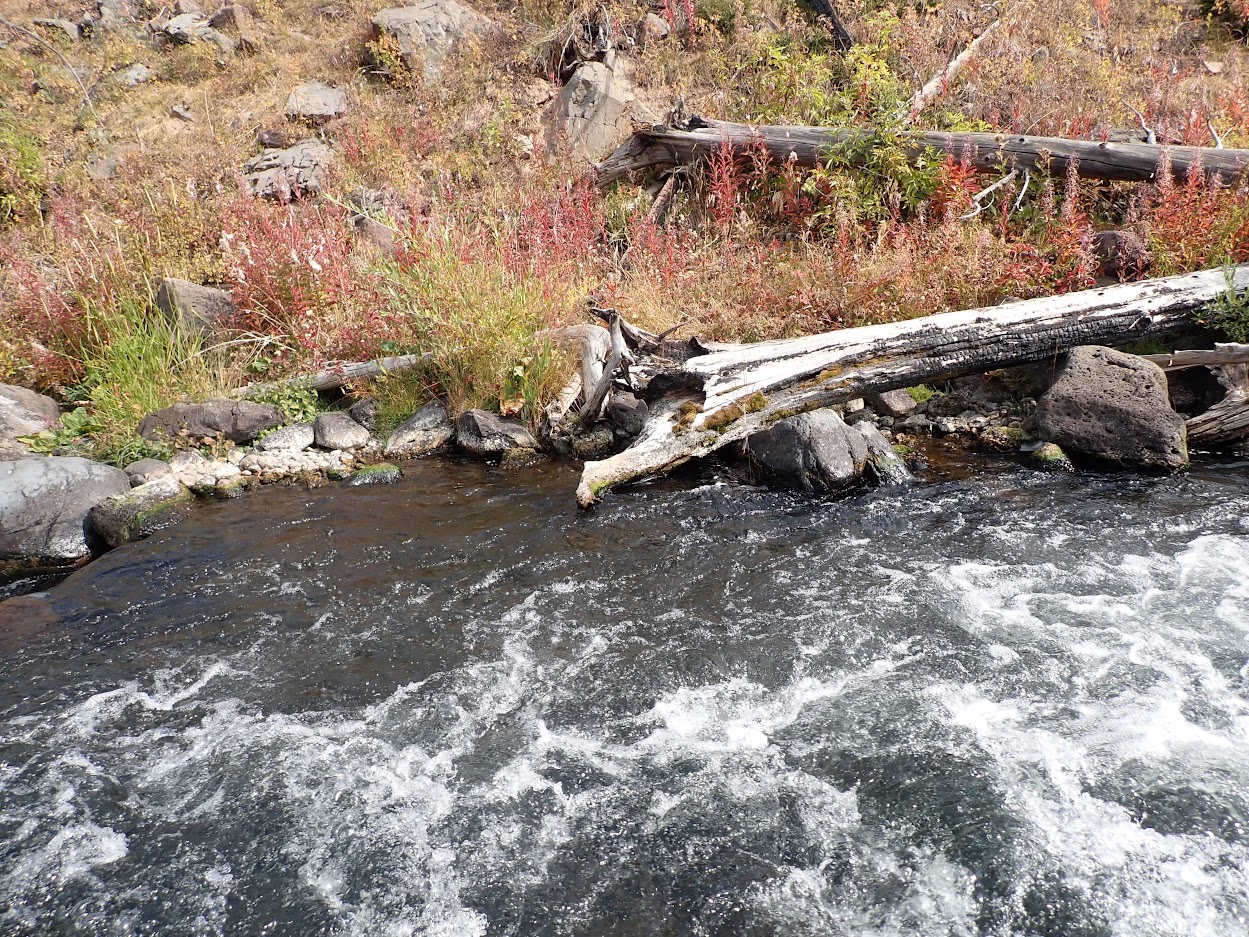 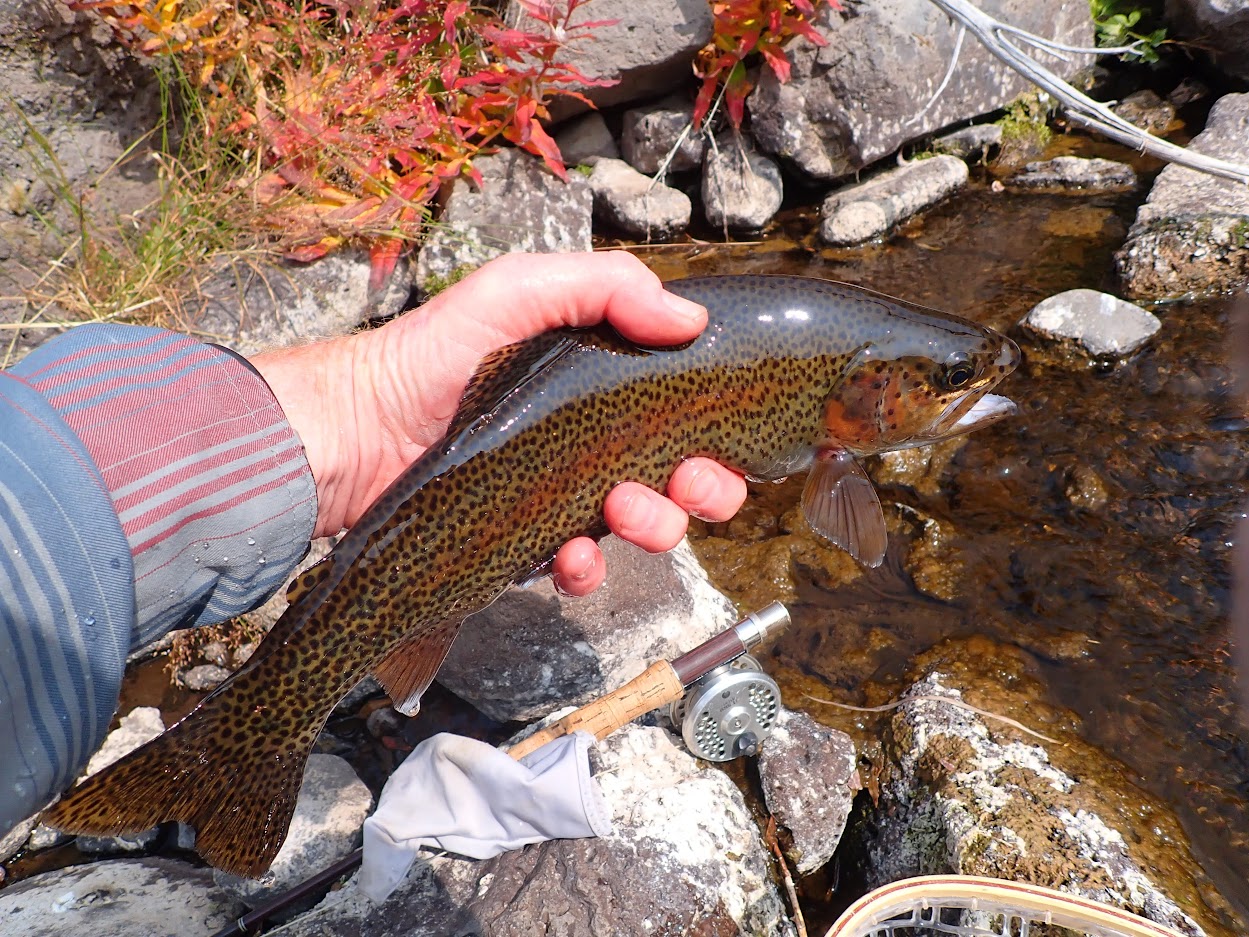 Color of Stripe Matches the Leaves

When I reached a count of twenty, I decided to experiment and added an ultra zug bug as a dropper off the stomper. The ultra zug bug picked up two fish, but the thin foam hippie stomper struggled to support the beadhead nymph, and consequently its effectiveness waned. I considered the situation and decided to rest the hippie stomper and switched to a tan pool toy hopper with a salvation nymph. A brook trout found the hopper desirable, and the salvation was snatched by another hungry brookie, but the overall pace of action slowed significantly from the early going with the solo stomper. 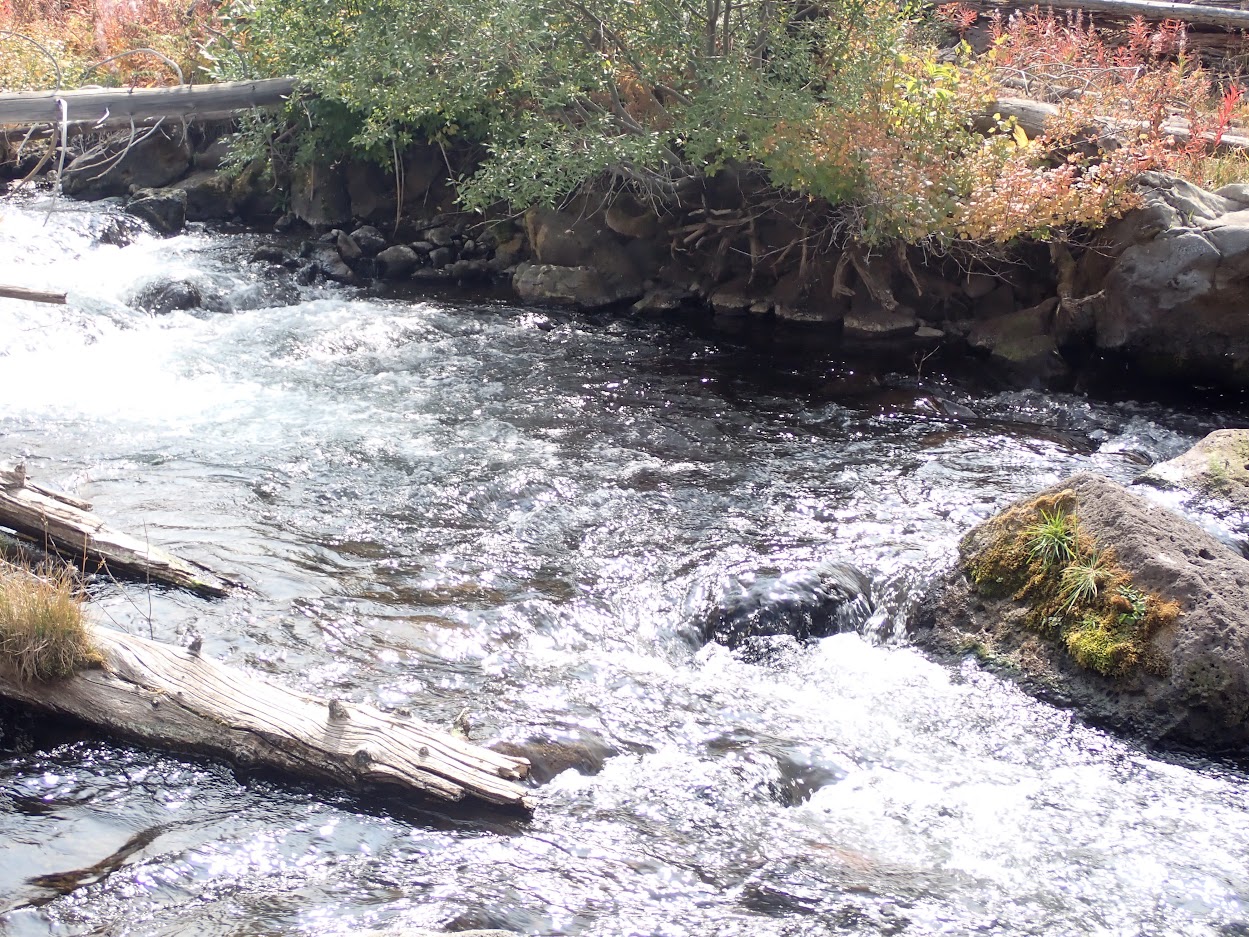 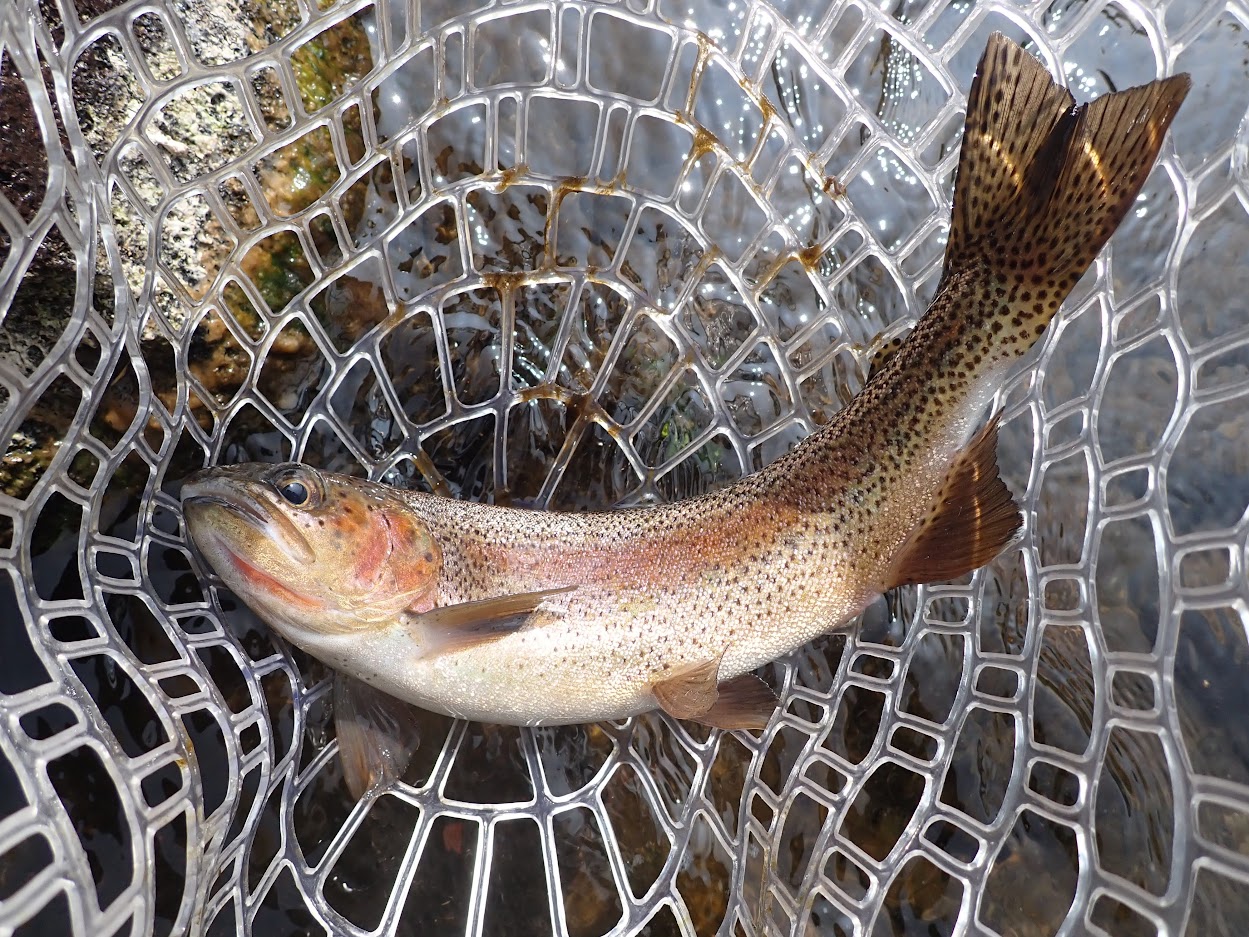 Not the Rock Band Slash 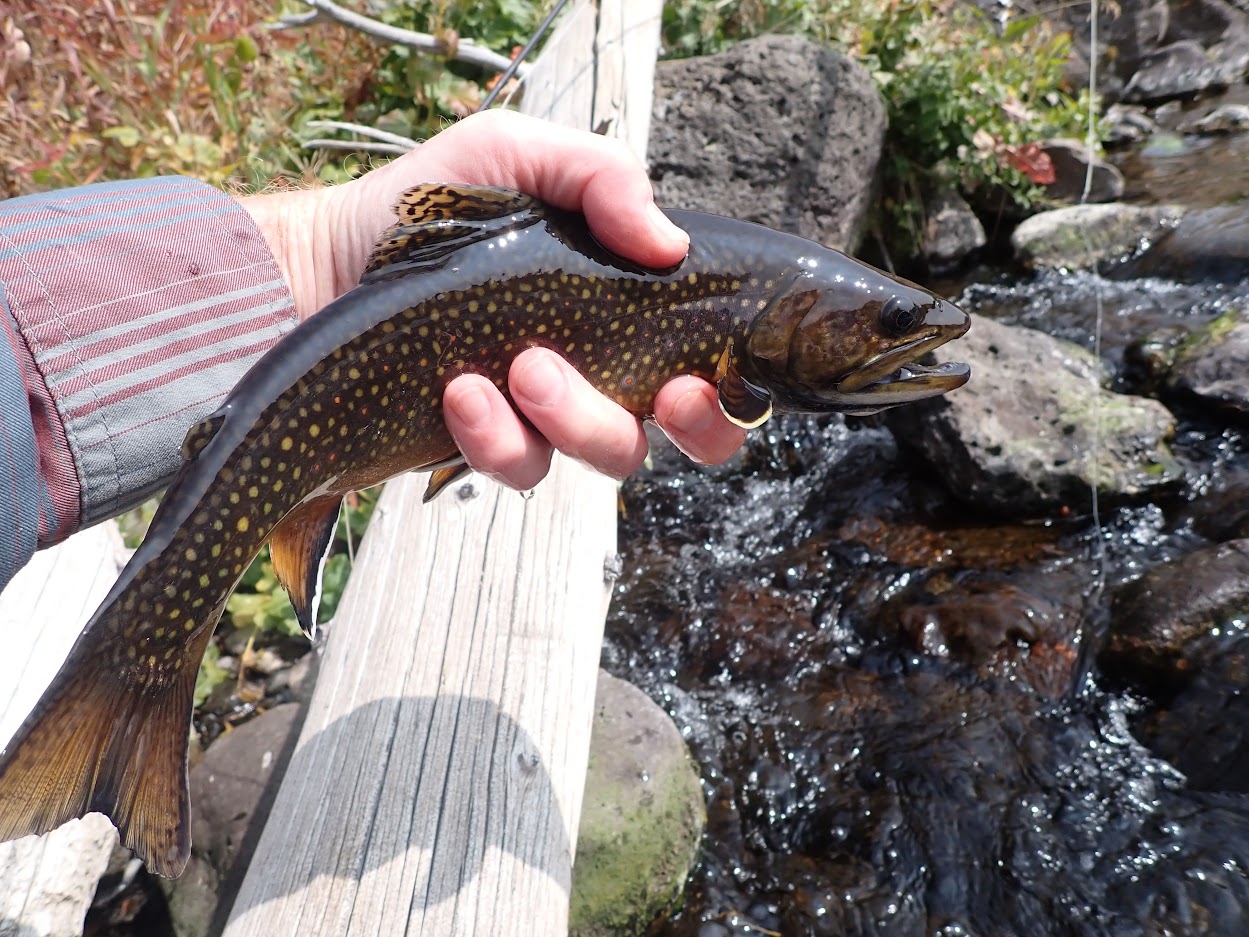 What did I do? I reverted to the ever popular hippie stomper, and I only deviated from the stomper once more at 4:00PM, when I spotted a pod of four cutbows in a narrow pool on the south braid of the river. Two trout refused the hippie stomper, and I observed several pale morning duns, as they launched from the water’s surface. I invested the time to switch to a size 16 light gray comparadun. The move paid dividends when a football-shaped cutbow sipped the PMD imitation, and a similar result was recorded in a nearby bucket-sized shelf pool. The brief interest in a pale morning dun imitation subsided, and it was difficult to track in the faster currents, so I once again reverted to the old reliable hippie stomper and closed out my day. 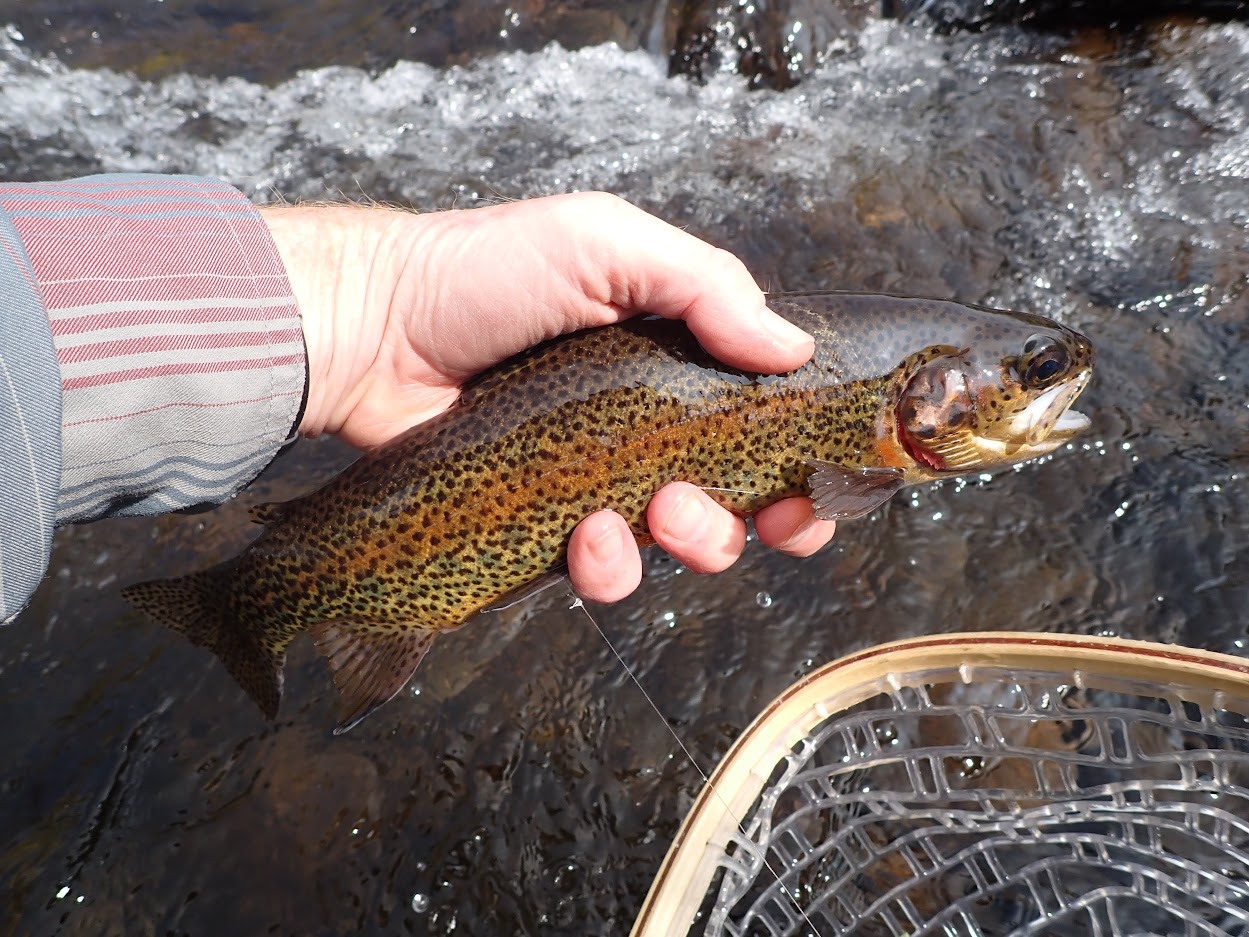 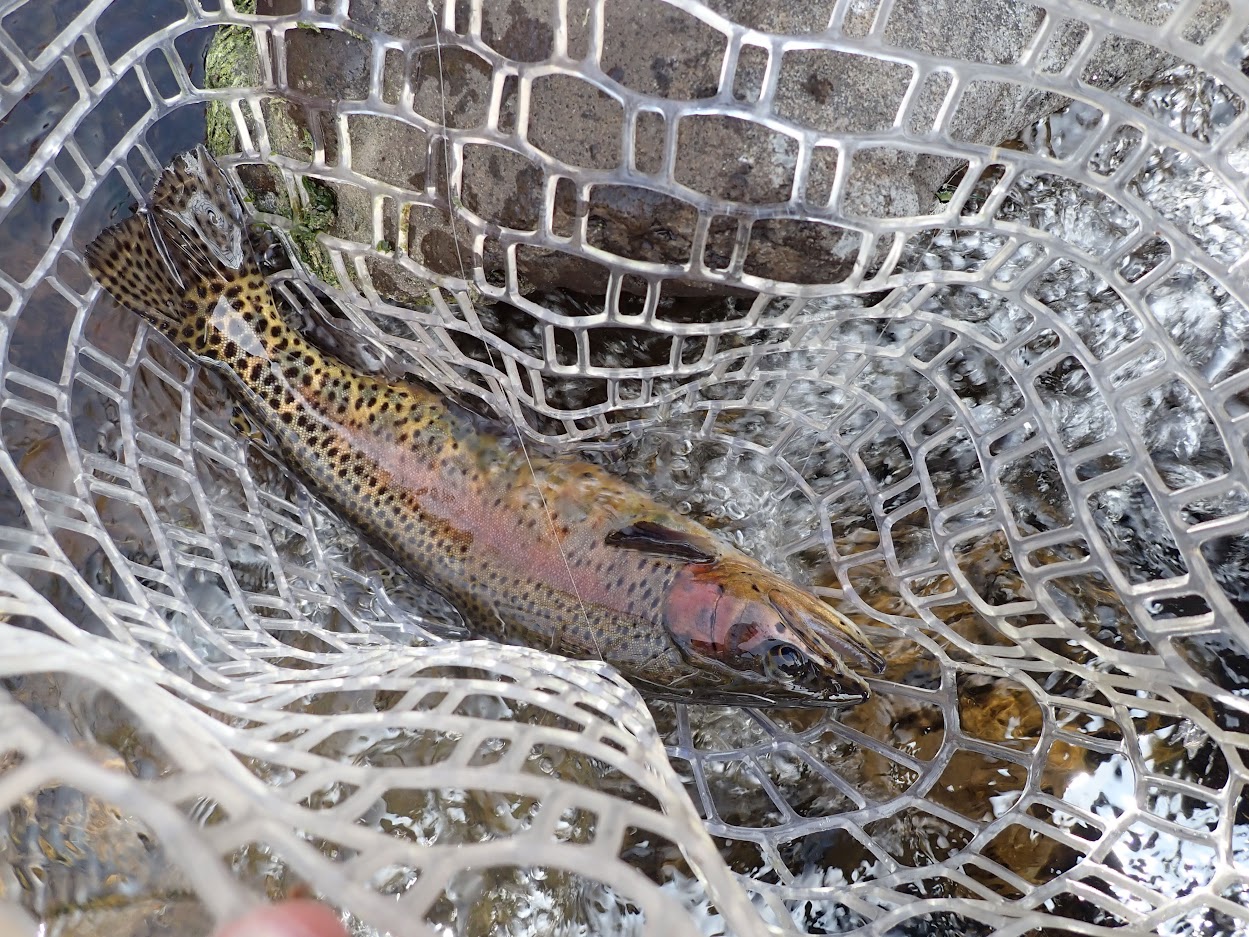 The Colors of the Rainbow 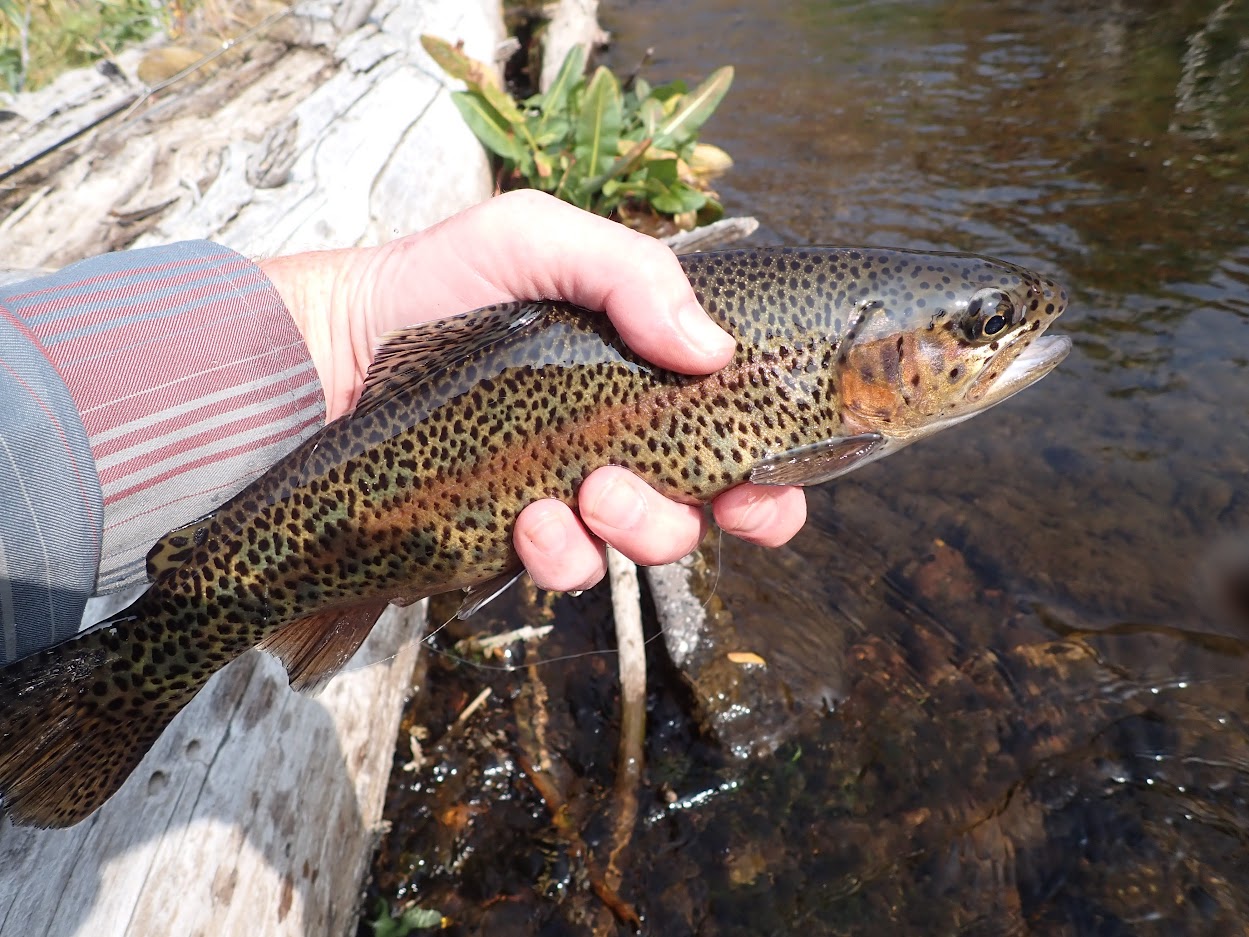 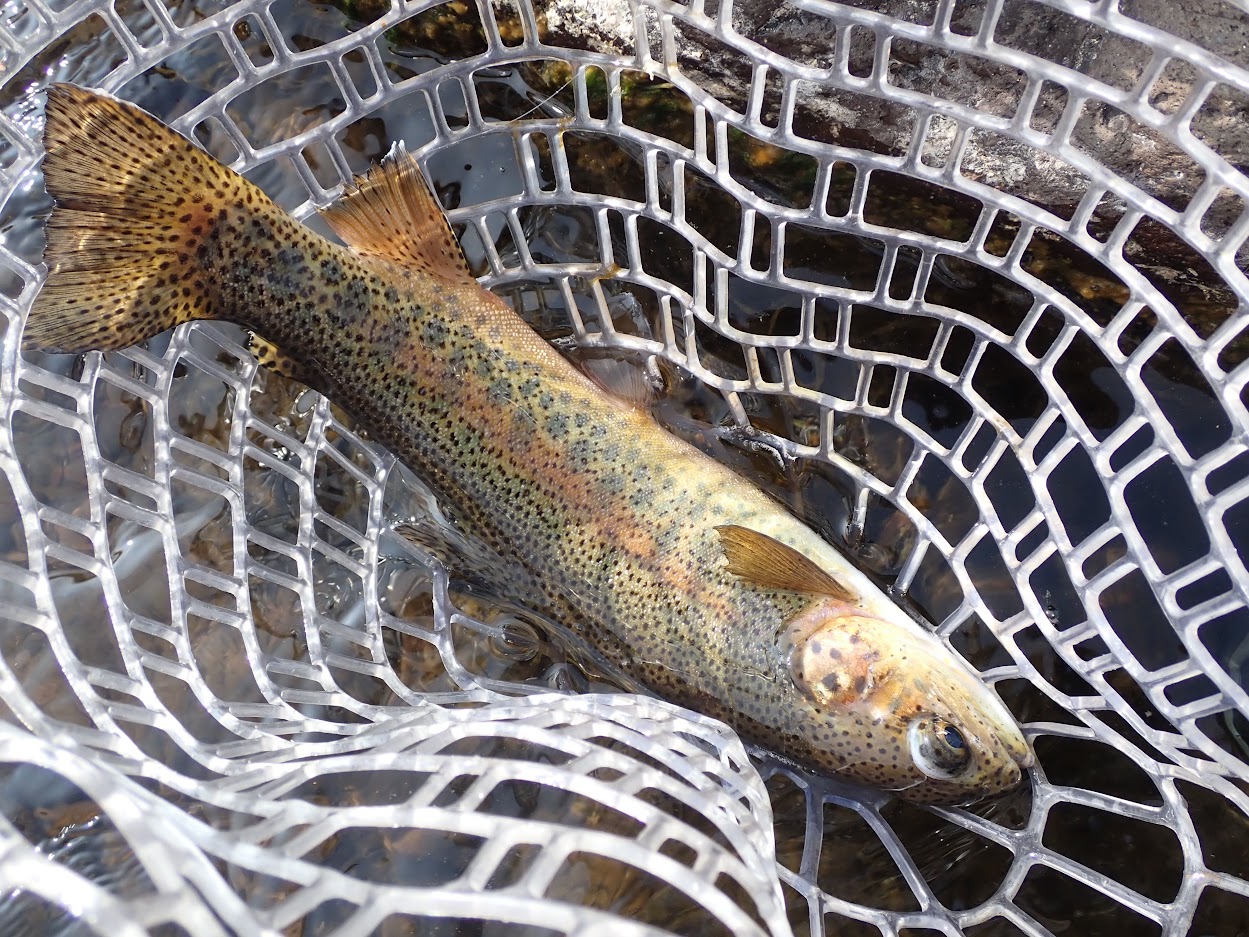 They Keep on Coming

I estimated that 75% of my fish count were brook trout, and they were clearly numbers boosters, although a few eleven and twelve inch fish were part of the brook trout booty. The rainbows and cutbows were outstanding. I netted at least eight wild cutbows in the twelve to fourteen inch range, and they dazzled with their array of vivid colors. Days like Wednesday are what keep me coming back to streams in search of trout. 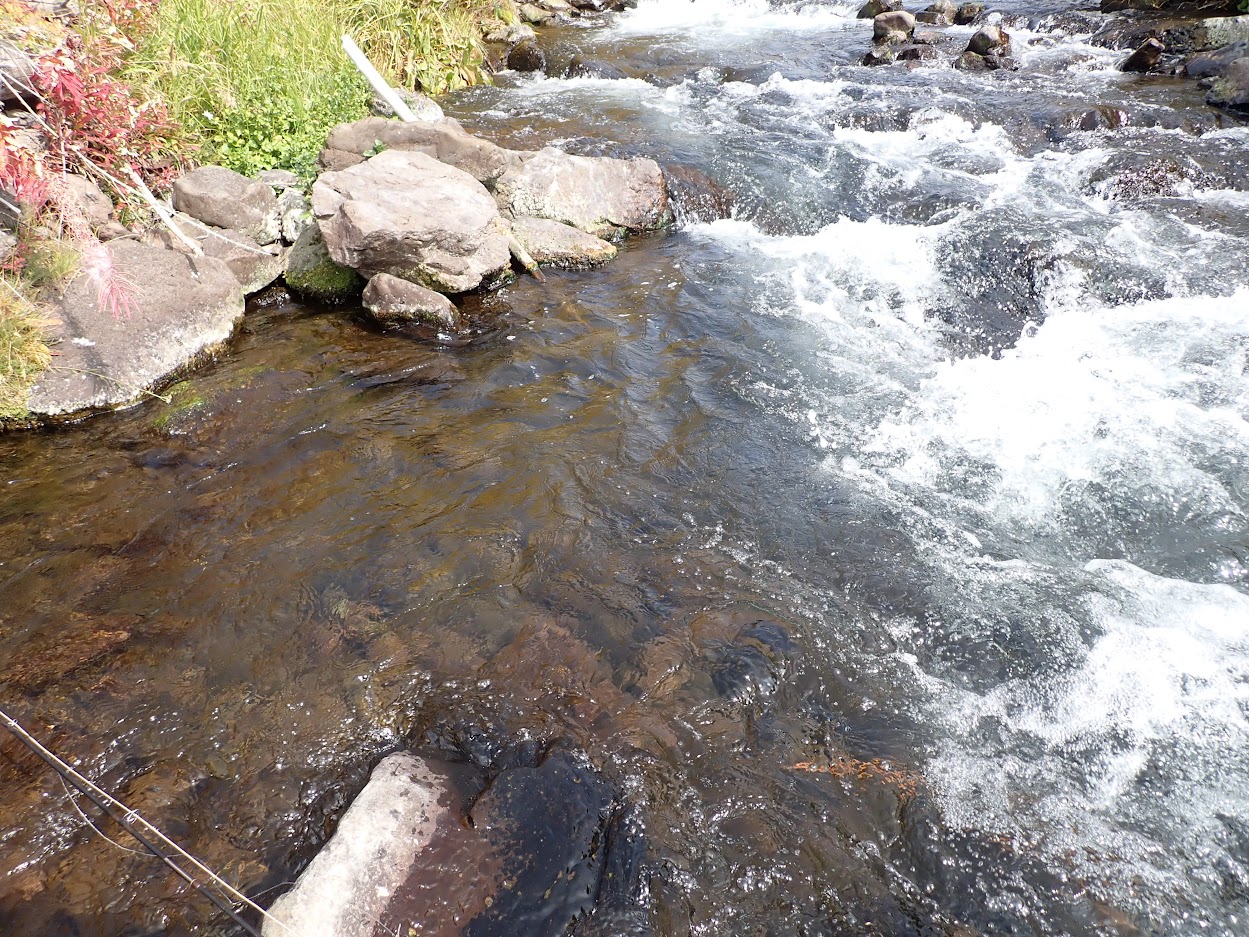