Thursday was nearly perfect for this avid fly fisherman. Yes, the fish could have been larger, but the remote setting and the outstanding beauty of the high country jewels that found my net were unsurpassed. I fished the North Fork of the Elk on 08/04/2020, and I was quite pleased with the results; however, the ongoing heat wave, drought and the expectation of a decrease in flows caused me to lower my expectations for another day on the small high country stream. 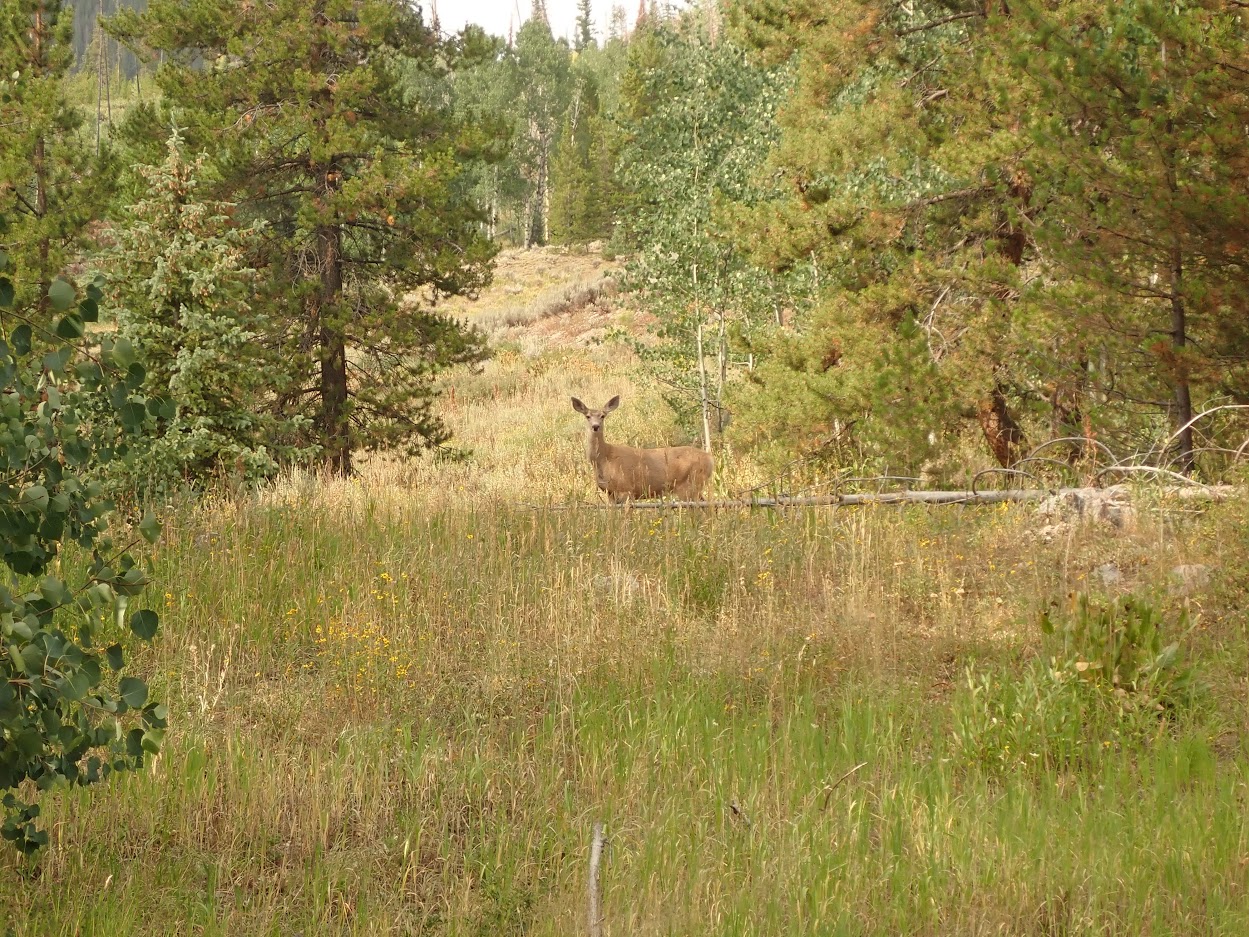 I woke up early, and I pulled on my down coat to ward off the cold air temperatures prior to the sun’s ascent to a position above the hill to the east. I ate my breakfast and packed up my camping gear, and I was prepared to fish by 8:30AM. I intended to wet wade once again, so I decided to tarry at the trailhead, while the sun warmed the air to more comfortable temperatures before stepping into the icy morning flows. I killed thirty minutes while reading my Nevada Barr novel on the Kindle app on my iPad. By 9AM I was ready to begin my fly fishing adventure, so I pulled on my wading socks and wading boots and assembled my Orvis Access four weight and launched a relatively short hike to the bank of the river. 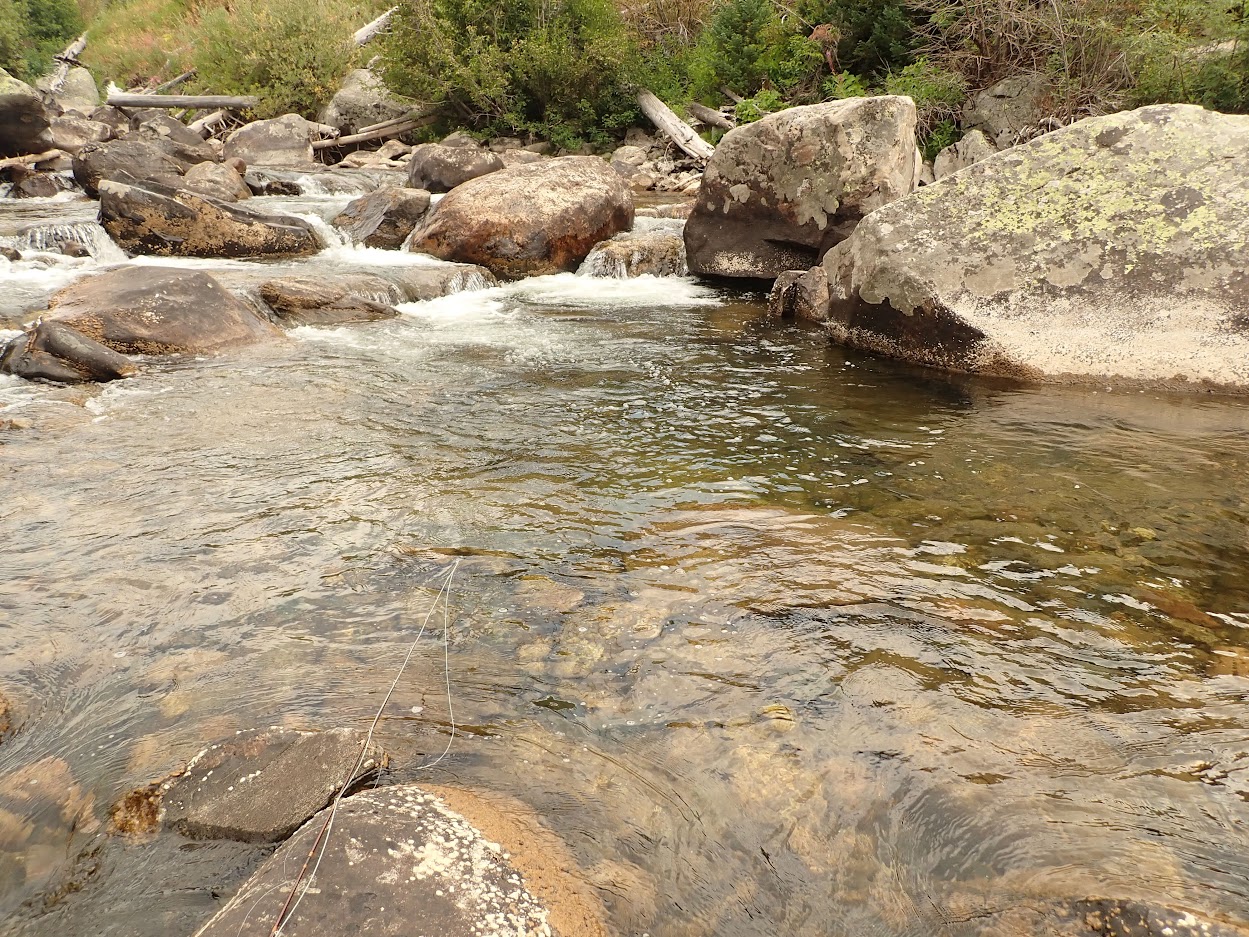 The flows were indeed down quite a bit from my outing on 08/04/2020, but the canyon section I was about to explore retained deep plunge pools and highly oxygenated flumes and cascades, so I was confident that I could find a few fish. On the plus side, the lower volume of water made wading along the rocky shoreline much more manageable, and I was thankful for this small advantage. The silver bodied hippie stomper and gray stimulator performed admirably on Wednesday, so I initiated my quest for trout with the same pairing on Thursday. 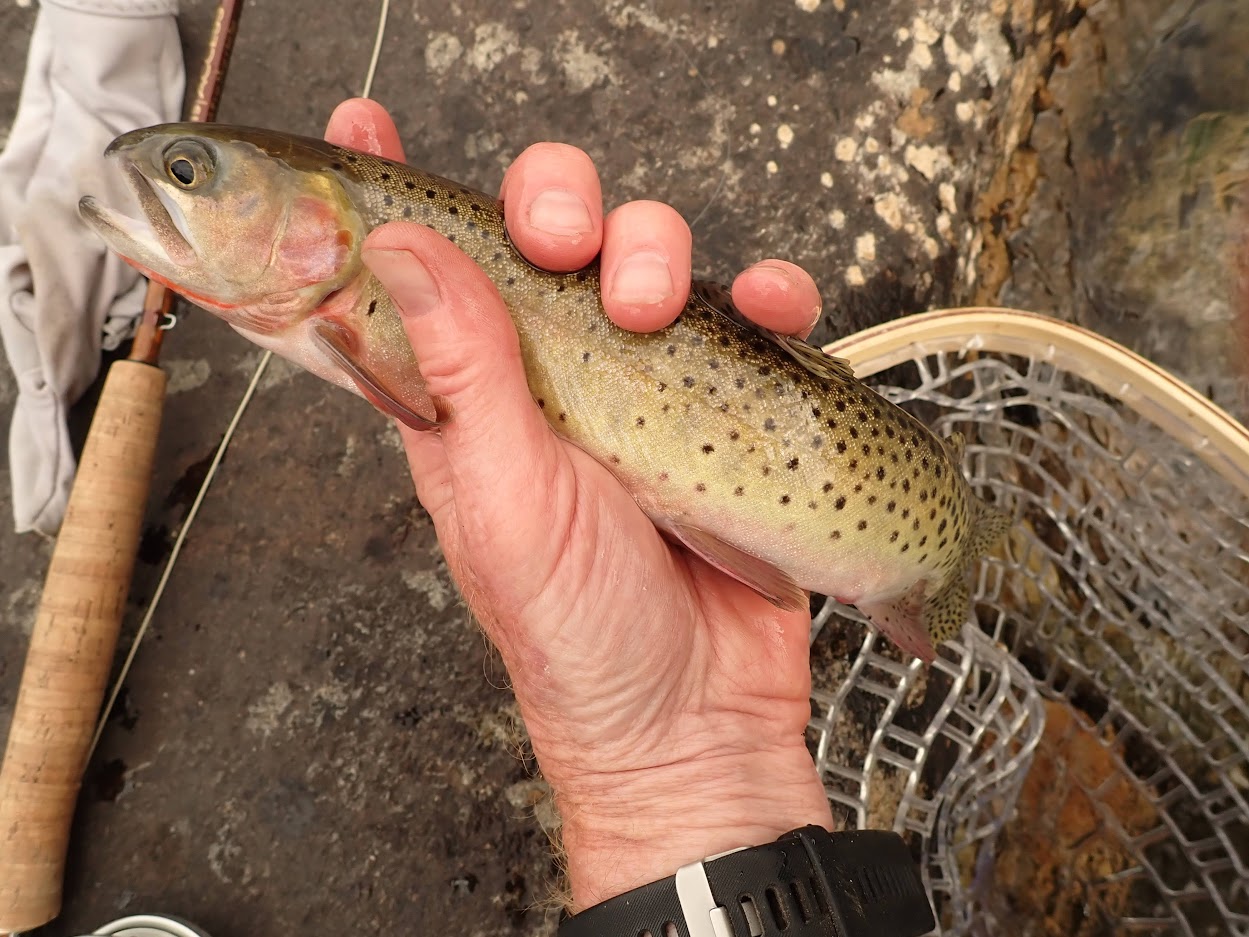 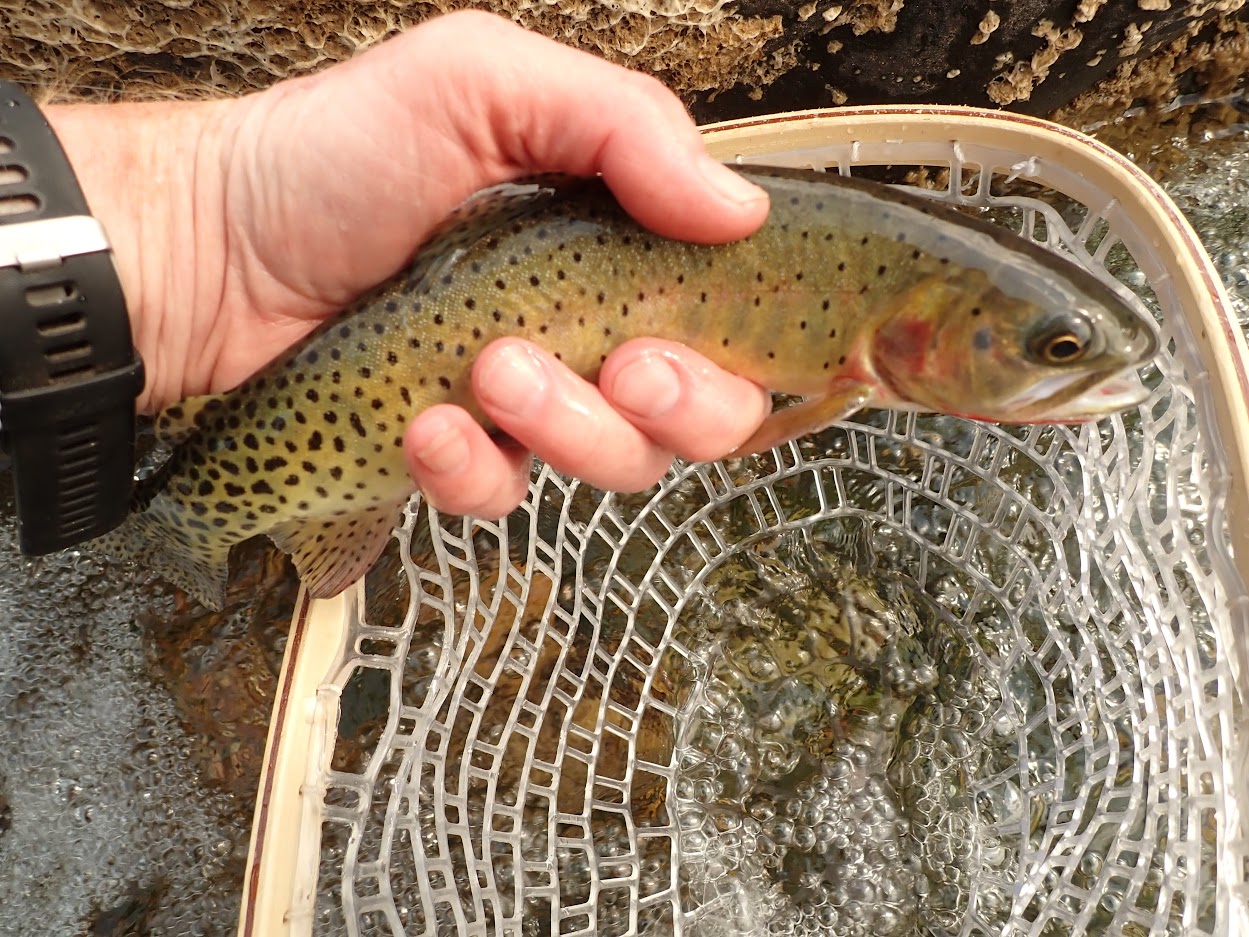 The Spots and Light Olive Knock Me Over

In the 2.5 hours before lunch I cycled through a series of fly combinations. The silver hippie stomper and gray stimulator notched one trout each, but the subsequent string of refusals to the hippie stomper prompted me to swap it for a size 16 olive-brown caddis, and I moved the stimulator to the forward position. These two flies elevated the action, and I began to connect with trout at an accelerating rate. I was particularly pleased to break through with some nice cutthroat trout in addition to the small browns and brookies that graced my net early on. In one attractive pool I spotted a very nice cutty, as it rose and inspected the flies repeatedly, but it was unwilling to commit, so I exchanged the caddis for a size 18 parachute black ant. Historically the small black ant has rescued me from frustration, when casting to ultra fussy fish, but on Thursday it was not the answer. 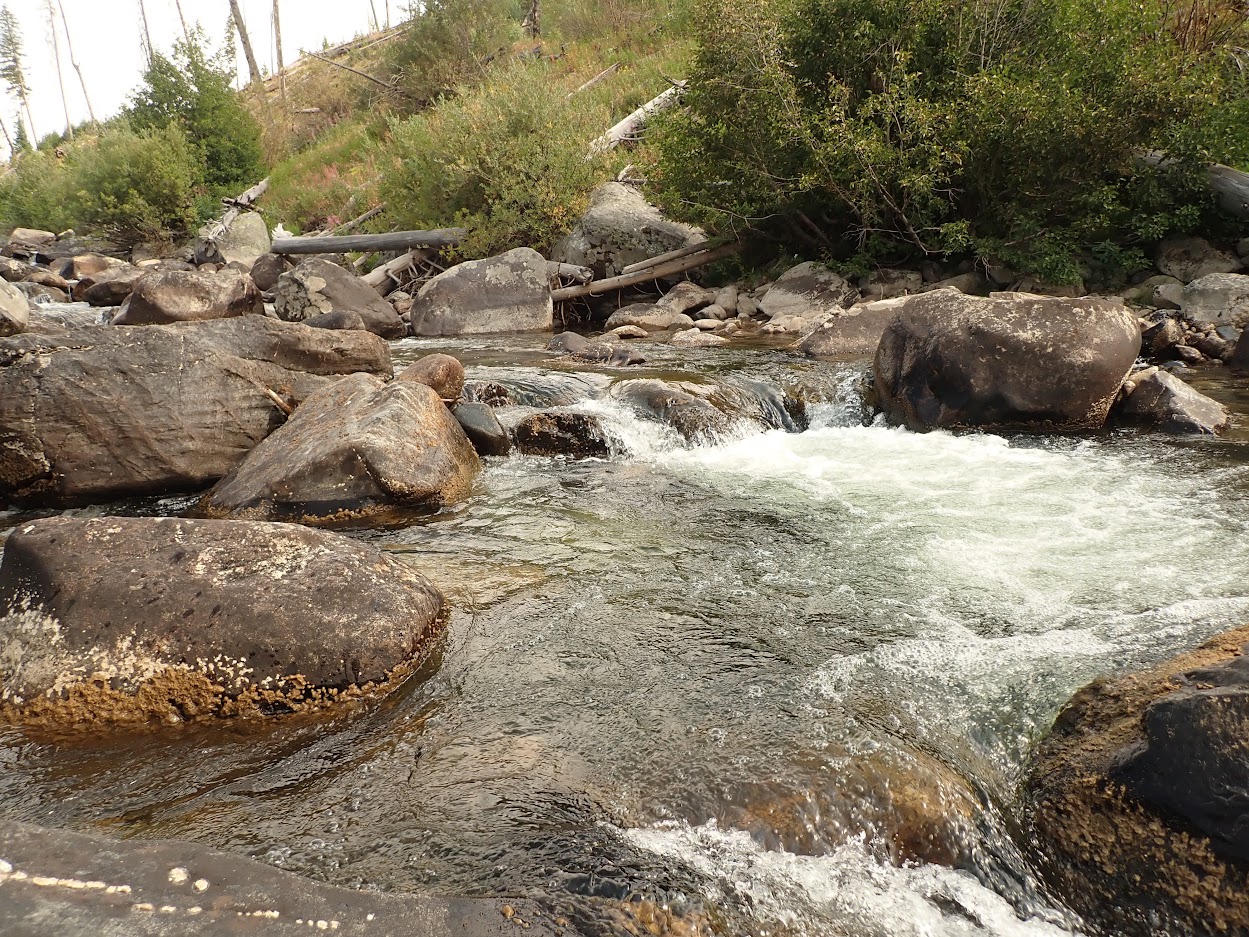 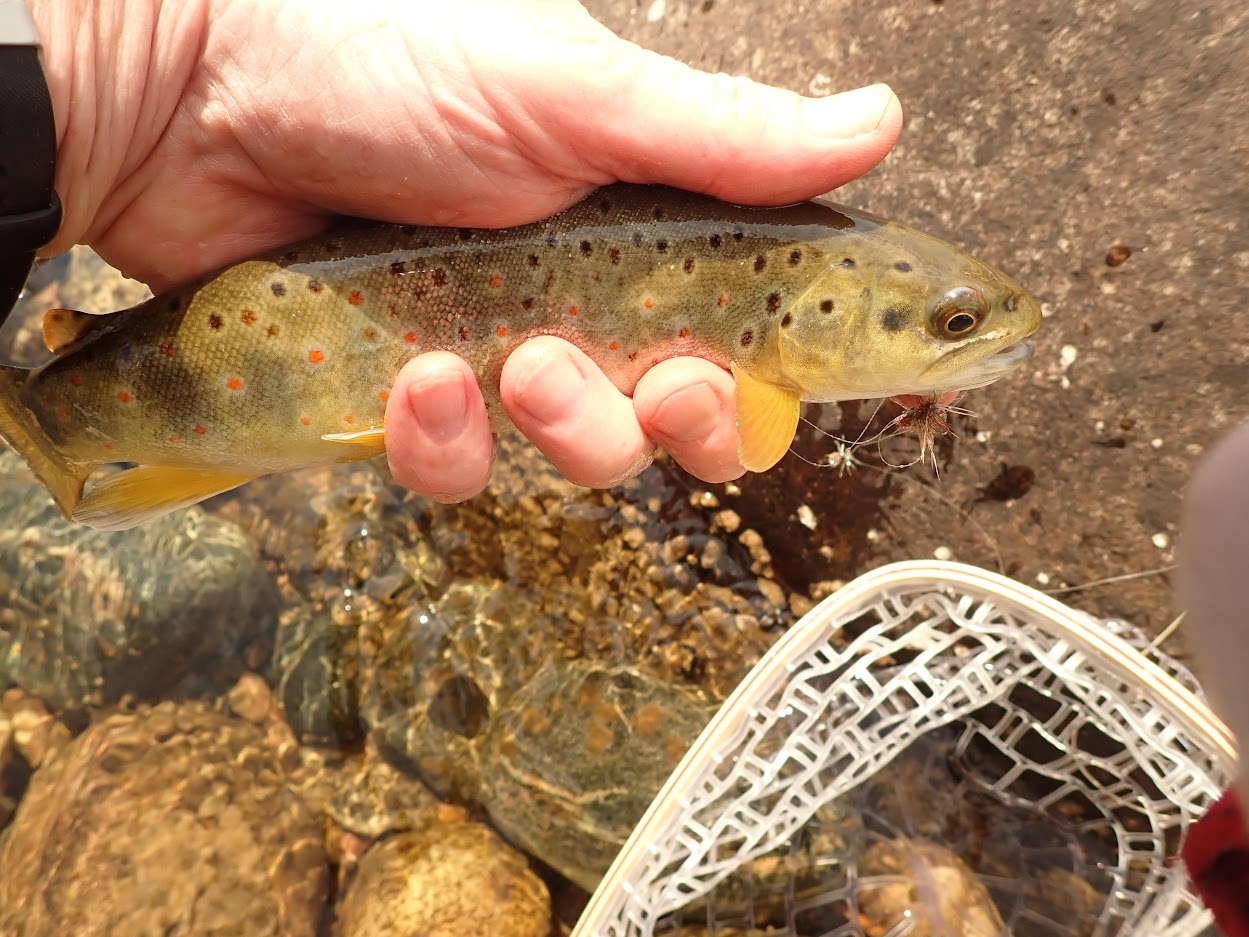 Browns Were Smaller Than Cutthroats on This Stream

Unwilling to endure the difficult visibility of the small ant given its lack of effectiveness, I swapped it for a user friendly green drake. On August 4 a green drake fooled several fish, and I surmised that perhaps the North Fork trout possessed long memories for the large western mayflies. This hunch was also off base, but fortunately, while this game of fly exchange transpired, the leading gray size 12 stimulator continued to produce. I was advancing farther from my starting point and deeper into the canyon, and the number of cutthroat trout that attacked the stimulator increased concurrently. I suspect this had everything to do with angler pressure and ease of access. 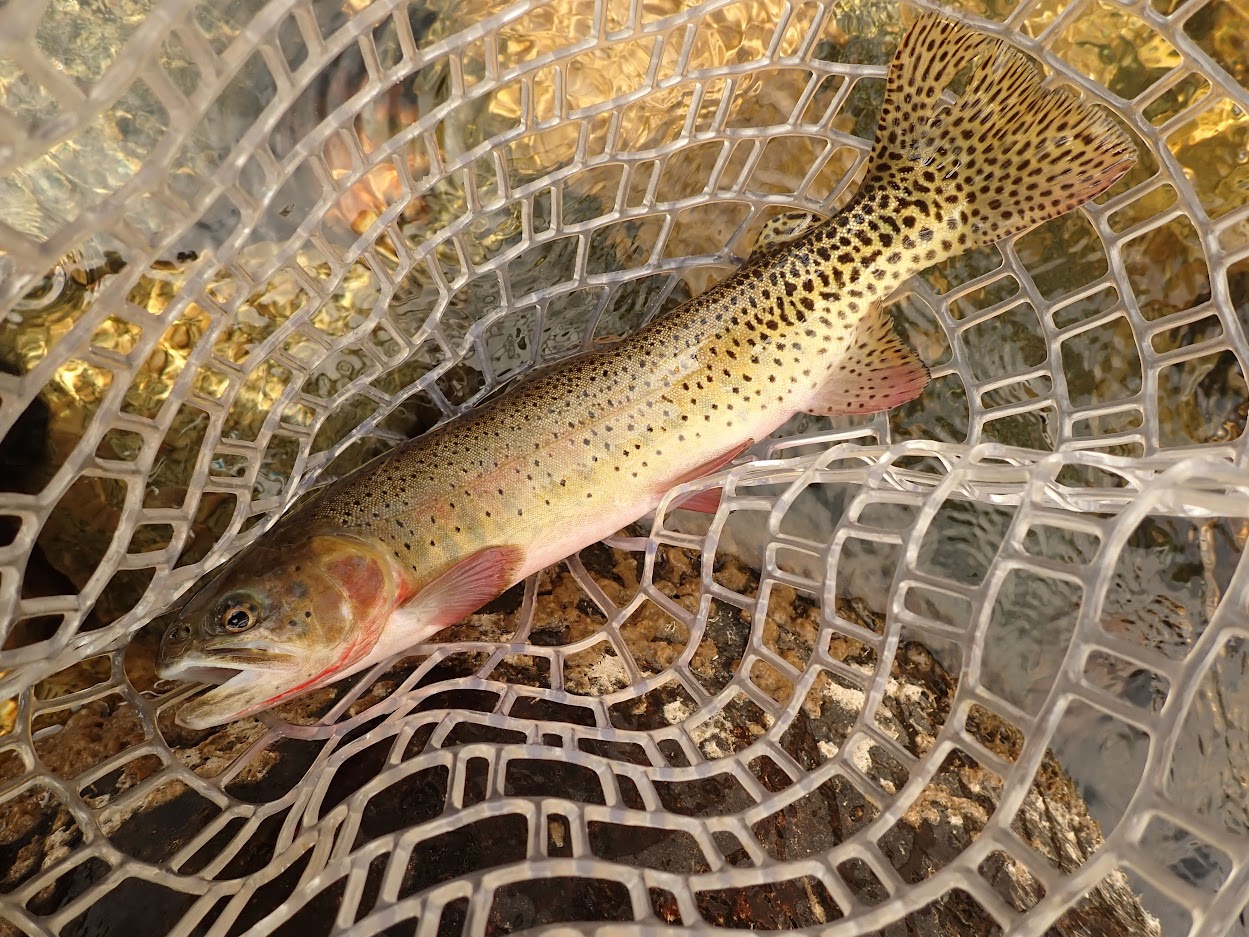 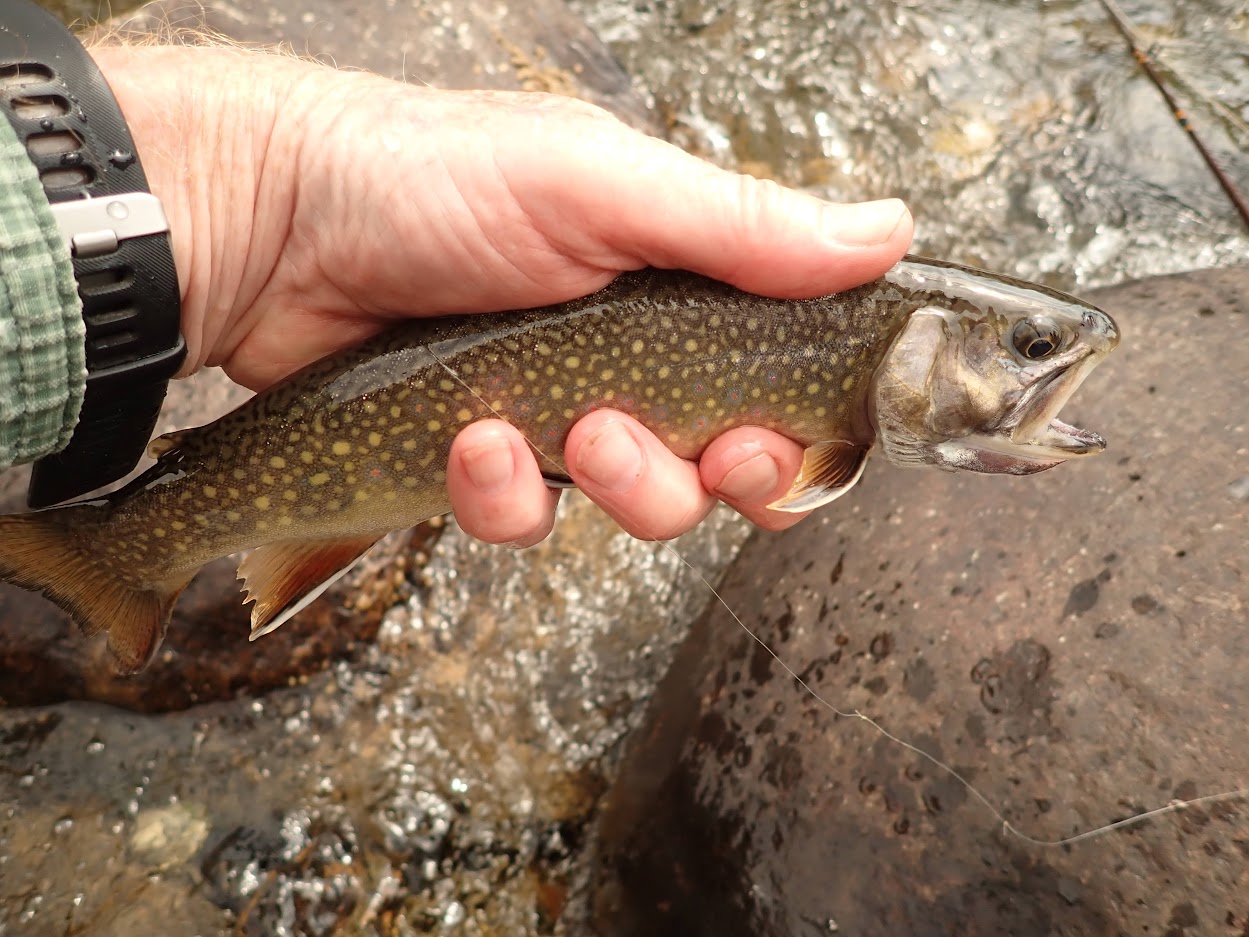 By lunch the fish count rested on twelve, and I was quite pleased with the results, although the gray stimulator continued to generate its share of refusals, and it seemed that the cutthroat eats were somewhat tentative. I decided to downsize to a size 14 olive bodied stimulator, and this fly remained in the forward position for the remainder of the afternoon. For awhile I fished it solo, and the trout responded, but in the early afternoon I spotted a couple pale morning duns, and this induced me to extend a section of tippet from the bend of the stimulator. I knotted a size 16 light gray comparadun to the the end, and the combination performed admirably, until the comparadun snapped off in the mouth of a fish. 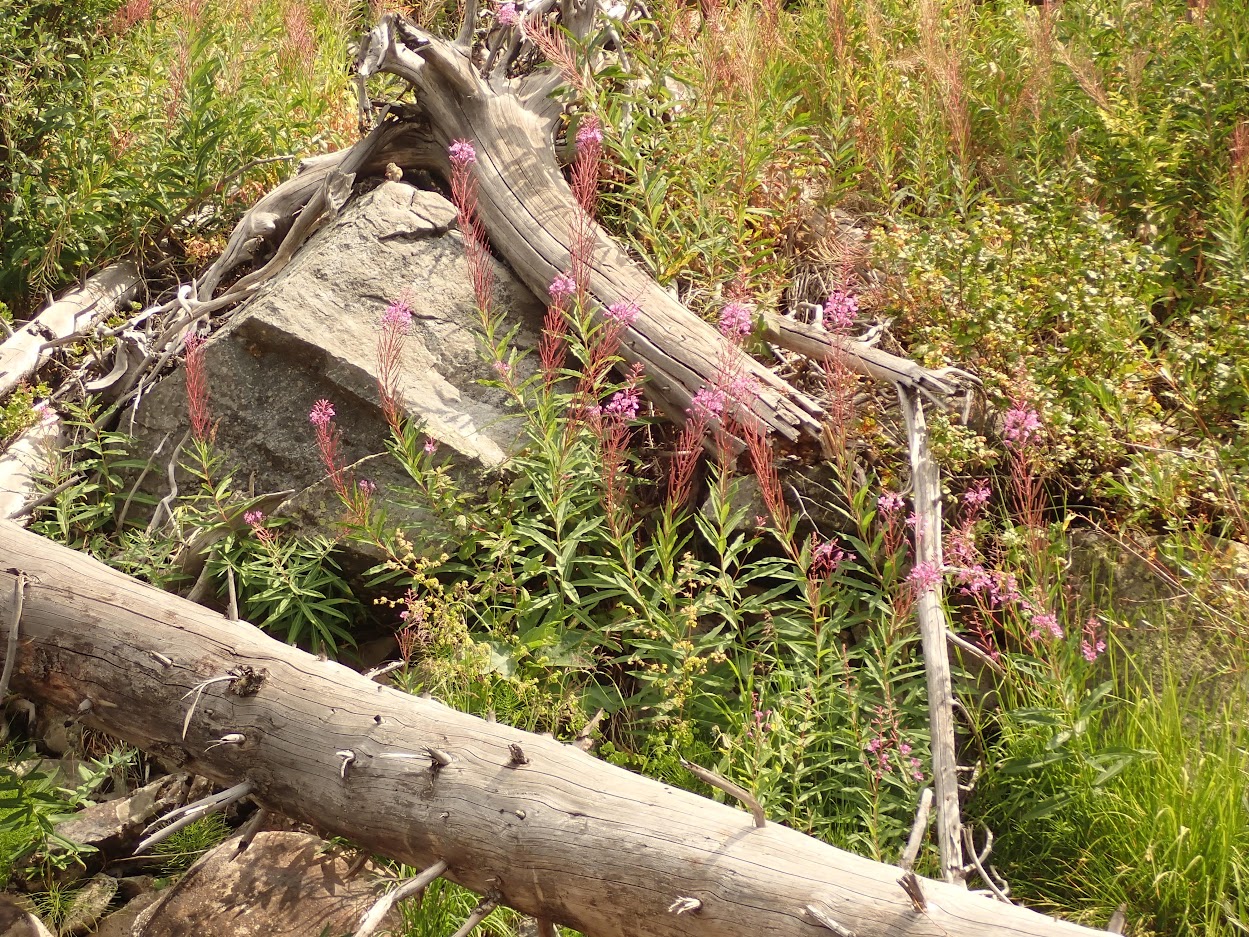 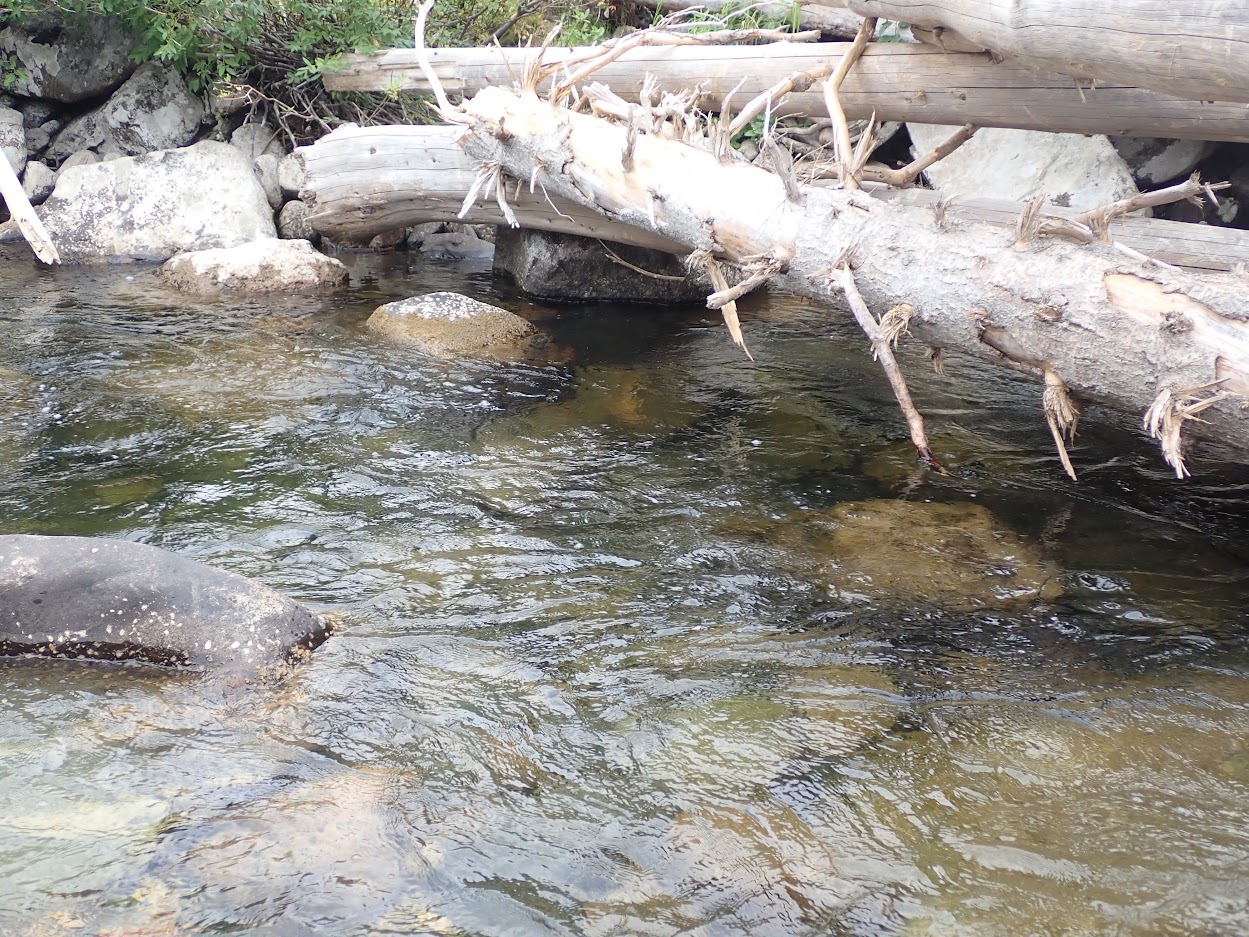 A parachute Adams is revered by the worldwide fly fishing community, so I climbed on board and attached a size 16 to my line in place of the light gray comparadun. I anxiously looked forward to the additional visibility of the white wing post of the Adams. The olive stimulator collaborated with the comparadun and Adams to increase the fish count from twelve at lunch to twenty-two by 3PM, when I hooked my flies to the guide and sought the path that returned me to the trailhead parking lot. I was quite pleased with my day on the North Fork, and I practically skipped with joy along the dusty trail on my return hike. 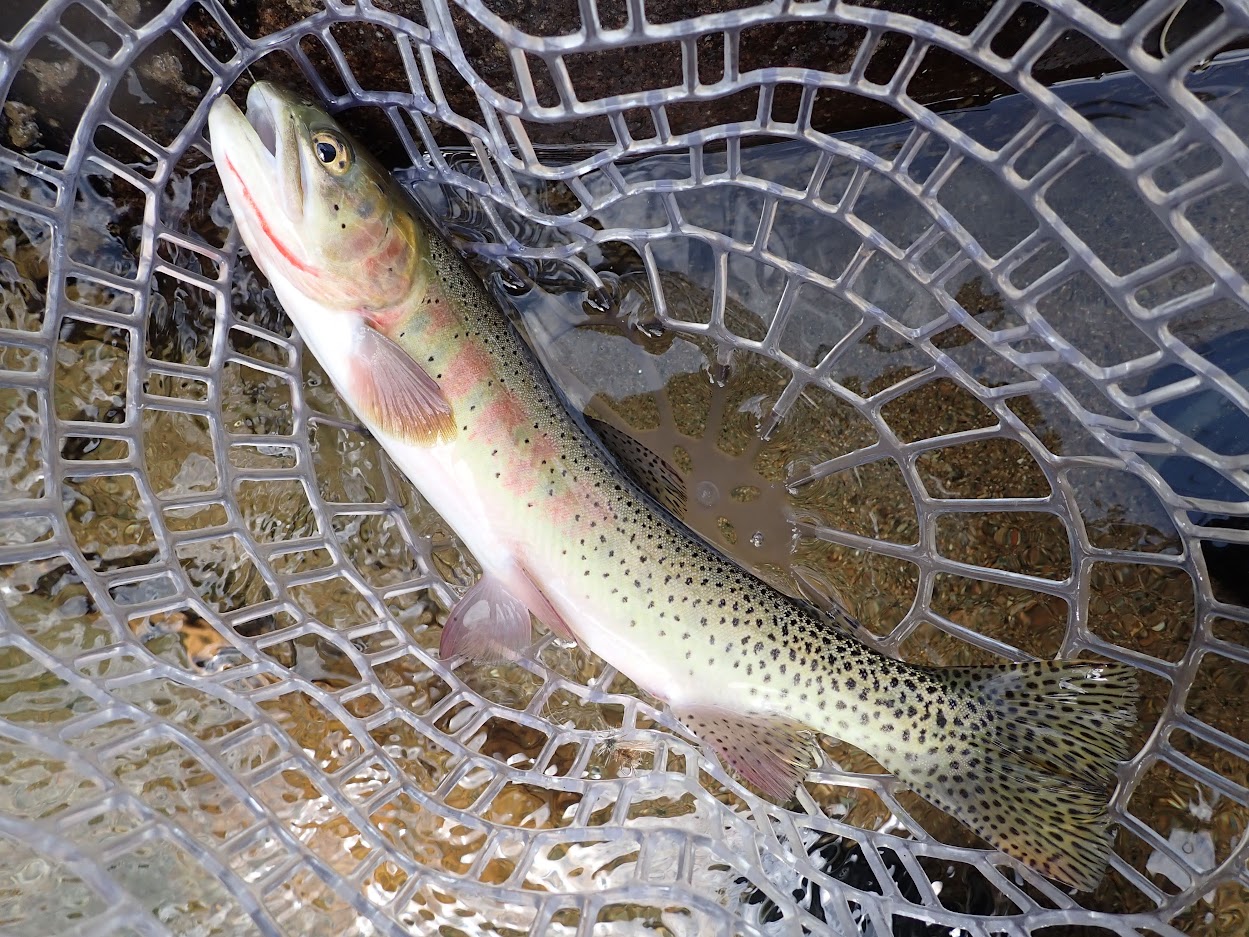 Must Be a Female

Of the twenty-two fish landed on August 20, eleven were cutthroats, seven were small brown trout and four displayed the orange belly of a brook trout. The cutties were the prize I was seeking, and they did not disappoint. Early in the game I realized that the cutthroat were the dominant fish in each pool. They favored long deep holes and seemed to position themselves at the bottom of the center seam or tail, as they ambushed food including my flies. My awareness of this circumstance caused me to approach the tail cautiously. The cushion in front of a submerged boulder was very popular, and quite a few nice cutthroats waited, until my fly began to accelerate around the boulder, before they moved laterally to intercept it. Once I recognized this ploy, I allowed my flies to drift deeper than normal. 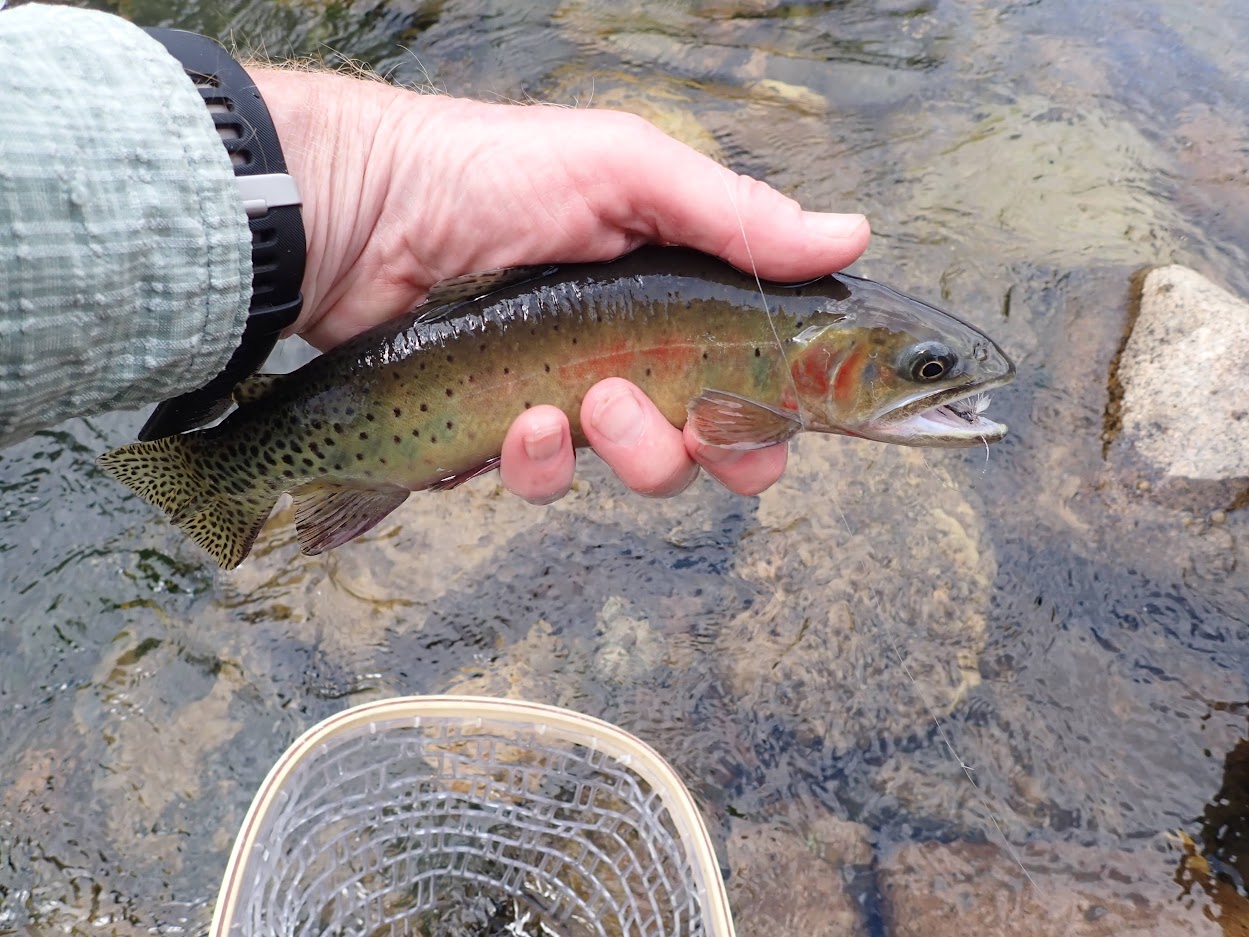 Stand Out Colors, Adams in Mouth

The color scheme of the backcountry cutthroat trout was spectacular. The belly area was typically cream in color, and the background color transformed into a light olive. A dense array of speckles adorned the tail and dwindled to a few dots on the upper body behind the head. The crimson cheek was a signature characteristic along with the orange-red slashes under the jaw. Several of the wild jewels displayed bright red undersides, and a couple of the later fish sported very light pink splotches along the sides, where a rainbow trout normally exhibits a stripe. Ironically my rarest catch in Colorado is the cutthroat trout, even though it is the only trout native to the Rocky Mountains. I cherished each one and handled them with utmost care. 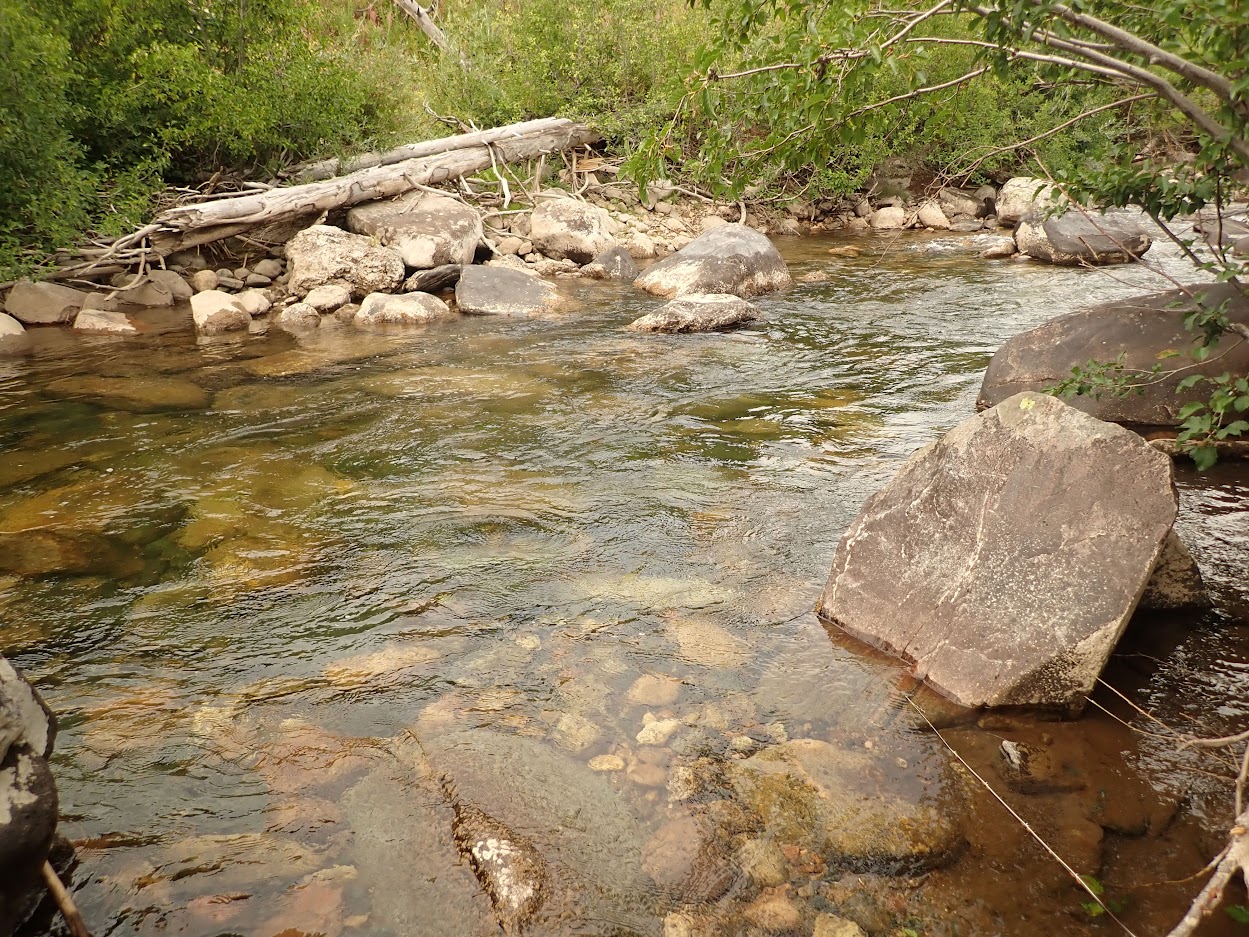