With four major fires raging in Colorado I was concerned about finding a high mountain creek that placed me a reasonable distance away from the danger zones. The area north of Steamboat Springs in Routt National Forest seemed like a viable location for a three day and two night fishing trip. Uncertainly about air quality and smoke prompted me to reach out to a person that I follow on Intagram, and she suggested that the direction of the wind was a major factor, but she expected the air to be reasonably free of smoke during the days that I planned to visit. This cinched my decision, and I packed the car with my camping supplies and fishing gear and headed off to central Colorado on Tuesday morning. My Home for Two Nights

I arrived at my chosen campground by 12:30PM, and I quickly claimed one of the first come, first serve campsites. After I visited the pay station and wrote a check for $12 for two nights, I returned to my campsite and ate my lunch and set up the tent. My national parks senior pass qualified me for a 50% discount, and no better deal can be found. It was now 1:45, and I concluded that plenty of time remained to log a few hours of fishing. The campground was situated at the confluence of two forks of the Elk River, and I decided to sample the nearby North Fork. 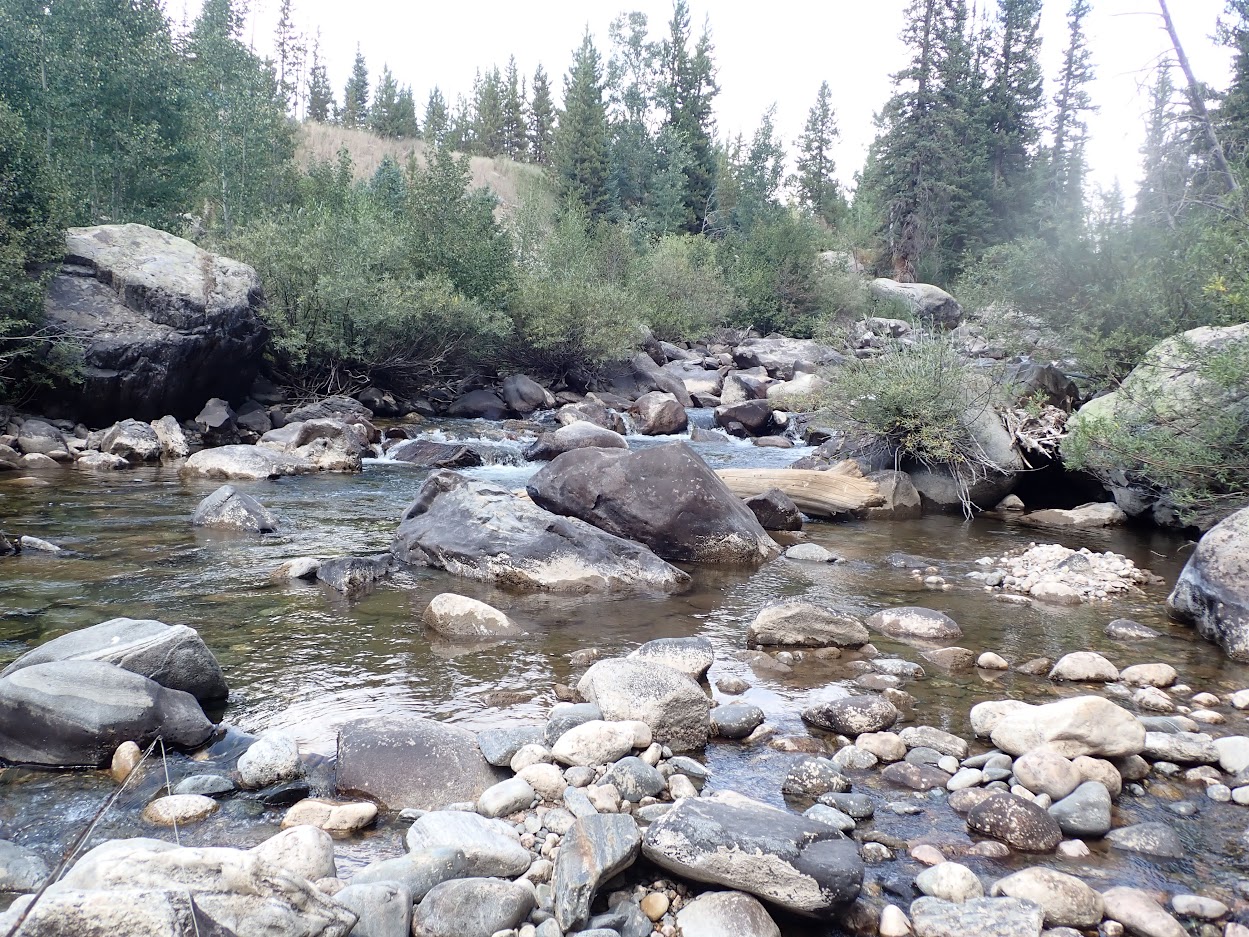 When I reached the place where the two forks merged, I noted that the flows were down from my previous visit on August 4, 2020, and the water was very clear. I estimated the flows to be in the 20 – 25 CFS range. The air temperature was quite warm, and I celebrated my choice to wet wade, as I slowly introduced my feet and legs to the cold mountain river. The afternoon was mostly bright and sunny, and a few large clouds blocked the sun periodically, but not enough to prevent the highs from spiking in the mid-eighties. 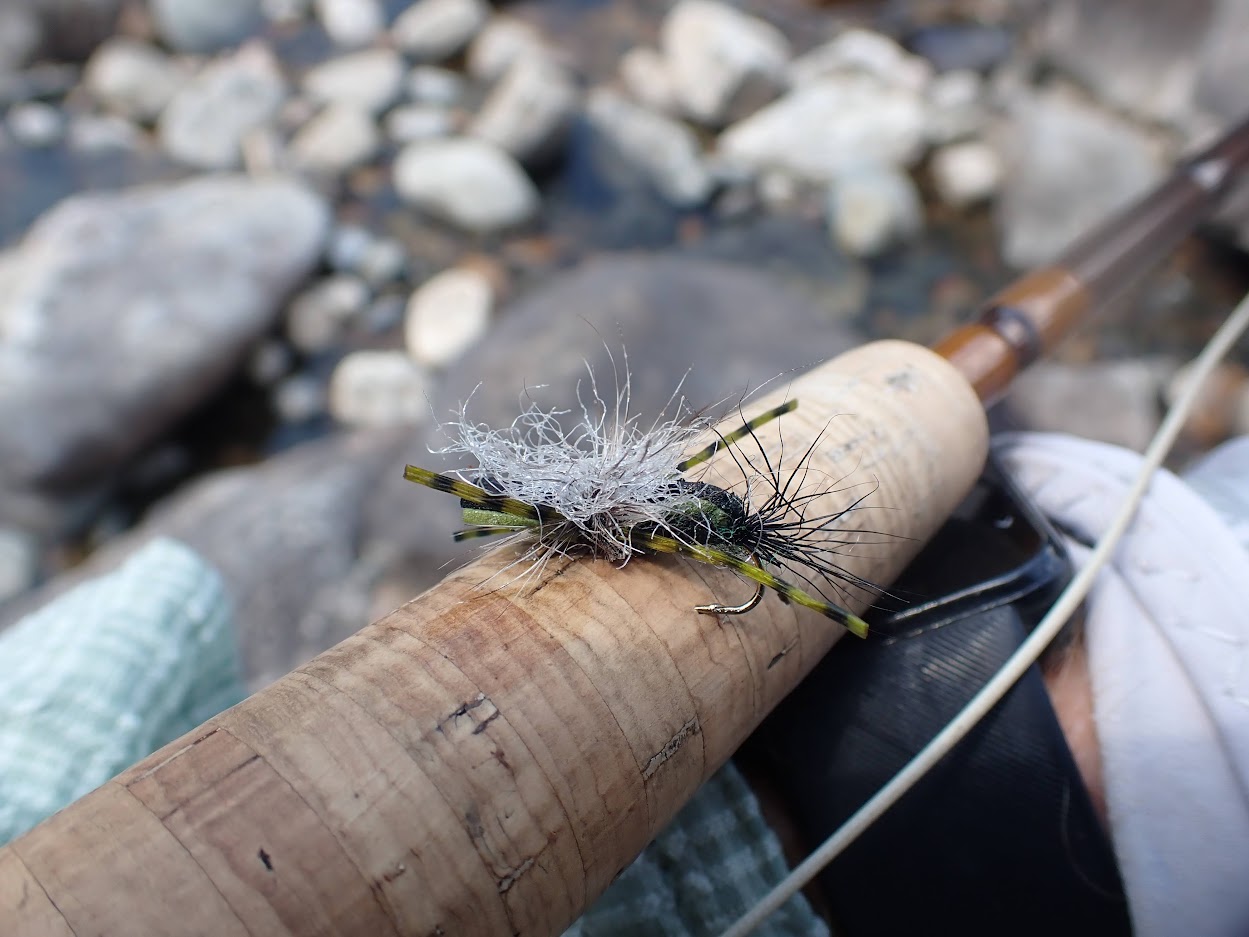 I began my two hours of fly fishing with a peacock hippie stomper and immediately landed a small brown, and then I connected with a more substantial fish that escaped the hook after a brief fight. I was rather optimistic after the hot start, but my hopes were misplaced. Within the first hour I landed another small brown trout on the hippie stomper, and then refusals became the prevailing state. Since the fish seemed to be attuned to the surface, I added an eight inch tippet to the bend of the stomper and knotted a size 14 olive stimulator  to the section. The move paid off in a short amount of time, when a decent rainbow locked on the stimulator. Shortly after this jolt of good fortune, a third small brown trout smacked the hippie stomper. 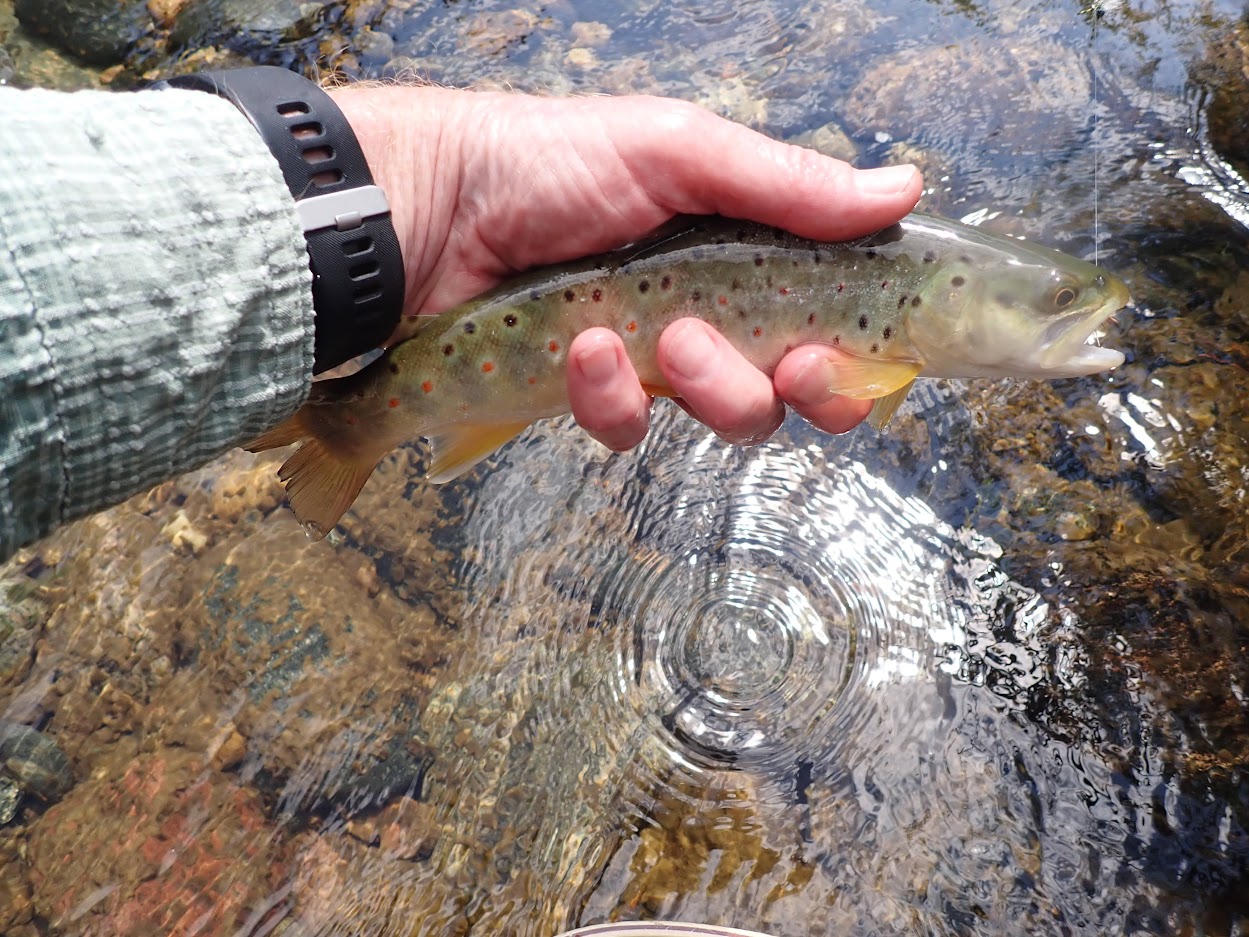 On the Board with a Small Brown Trout

The fish count rested on four for a considerable lull, until I dropped the double dries in a slow moving pool in front of a large log, and a surprise jewel of a cutthroat slurped the stimulator. I persisted upstream for another hour and covered a significant amount of stream real estate, but additional trout were either resting or not interested in my offerings. I witnessed a few refusals and temporarily hooked some very small trout, but the time between 3:15PM and 4:15PM was primarily futile. 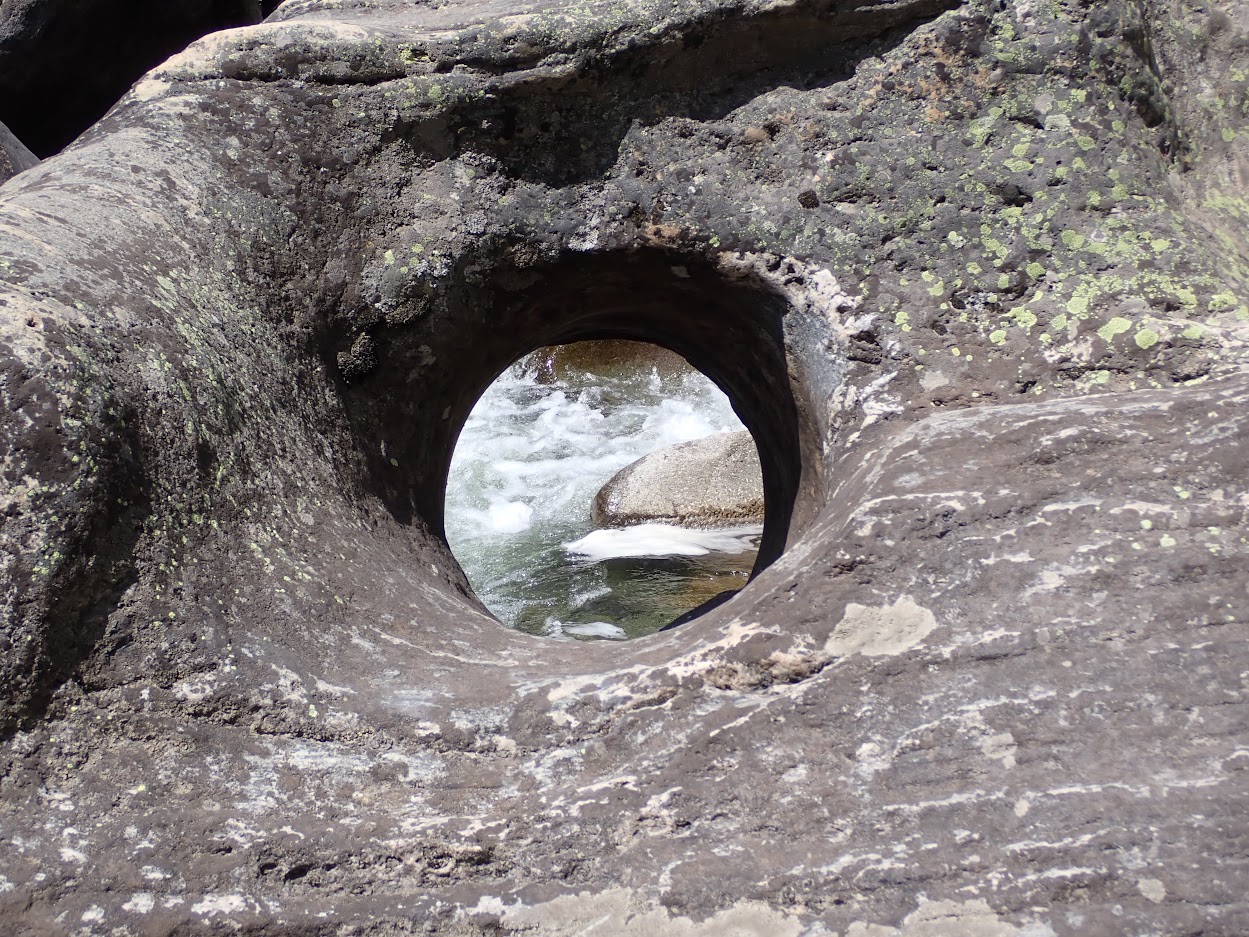 A Cool Porthole in A Rock Next to the River

I tried a beadhead hares ear dropper and then also experimented with a solo parachute green drake, a Jake’s gulp beetle, an olive mugly caddis, and a size 10 Chernobyl ant. I am not sure whether to attribute the doldrums to the late afternoon heat or fishing in areas much closer to the road and the campground. I vowed to do some hiking on Wednesday and Thursday. 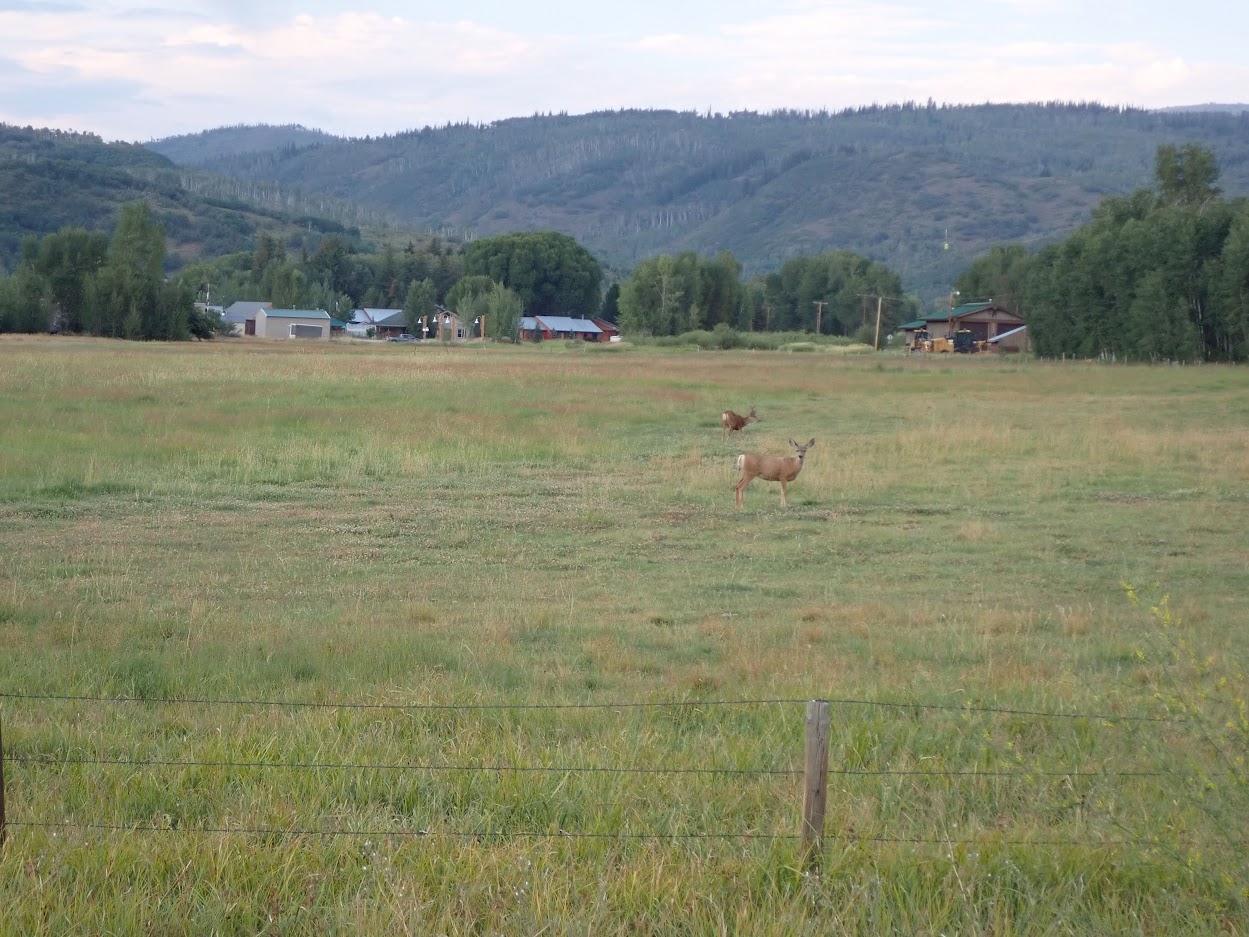 Five fish in two hours is respectable, and the one rainbow probably measured in the twelve inch range. I was pleased to encounter a native cutthroat, and hopefully that was a harbinger of more to come on Wednesday and Thurday. All in all it was an acceptable introduction to my stay in the Elk River Valley.