Jane OK’d fishing on the Fourth of July, but I needed to return in time to attend the Rapids MLS soccer game at 7:30PM and the subsequent fireworks display at Dick’s Sporting Goods Stadium. I was interested in trying the Colorado River as reports indicated that pale morning duns were hatching, but that was a bit distant given the plans for the evening. I decided to try the North Fork of the St. Vrain in the Wild Basin section of Rocky Mountain National Park.

For some reason Jane got up extremely early so I was up shortly thereafter and consequently was on the road by 7:30. I took the route through Boulder and experienced minimal traffic thus arriving at the Wild Basin entrance by 9AM. Even at this early hour the parking lots at the main trailhead and the Ouzel Falls trailhead had already filled. This was fine with me as I planned to fish starting at the fist bridge above the beaver ponds.

I rigged up my Orvis Access rod and walked down the dirt road .2 miles to the bridge. There was a man and woman fishing below the bridge so I made a right turn and hiked up the path a ways to the first water that might hold fish. It was already getting warm, but the cold sensation of the rushing high mountain river felt good through my waders. I tied on a Chernobyl ant with a salvation nymph dropper initially, but this produced only refusals from tiny brook trout. I clipped off both flies and tied on a royal stimulator, and this elicited the same response. Next I tried a small size 14 lime green trude and this also resulted in splashy inspections but no takes. 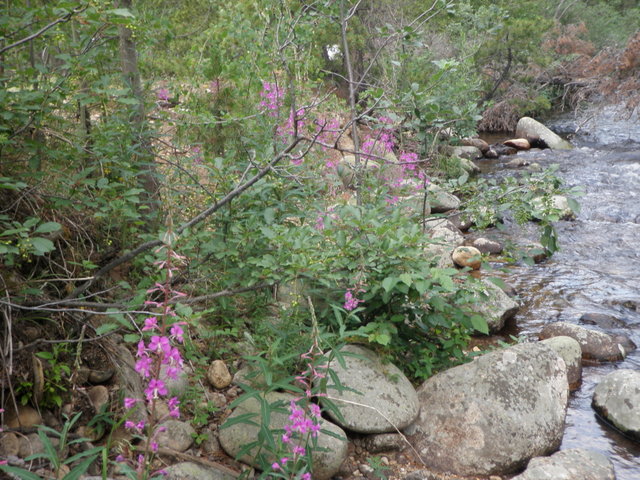 I was getting frustrated as I tried a yellow sally and deer hair caddis with no better luck. Maybe they wanted something bigger, not smaller? I plucked a size 12 2XL lime green trude from my pouch and sure enough this began to produce fish, but only sporadically. Maybe the water was still too cold with no significant hatches so the fish were still tuned into nymphs in the drift? But what should I use to support my beadhead nymphs? I spotted the large olive stimulator that I tried for a while on the Conejos to imitate the local stoneflies. I tied on the stimulator with a beadhead hares ear dropper and guess what happened? The fish began to smash the large attractor. In fact they weren’t paying the slightest attention to the nymphs so after landing a couple fish I clipped off the extra leader and the nymph. 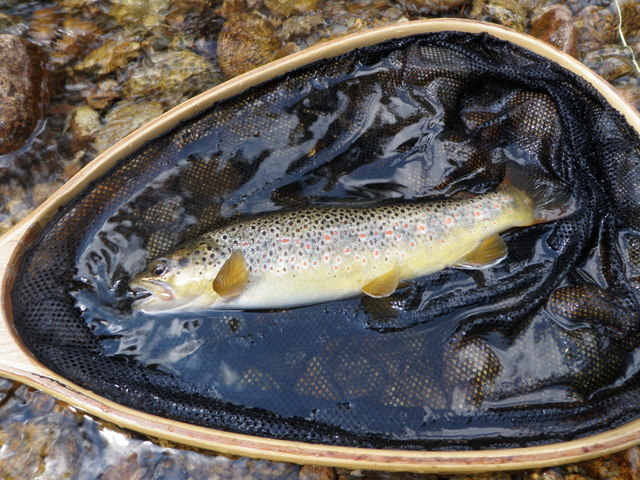 For the remainder of the morning and up until 12:30 I prospected the likely pockets with the olive stimulator and landed a total of nine fish. Three were browns and these were the largest fish, although perhaps only ten inches at the largest. The remainder were brook trout with three being decent by brook trout standards. I also landed somewhere between 5-10 brookies beneath my six inch cut off for counting. 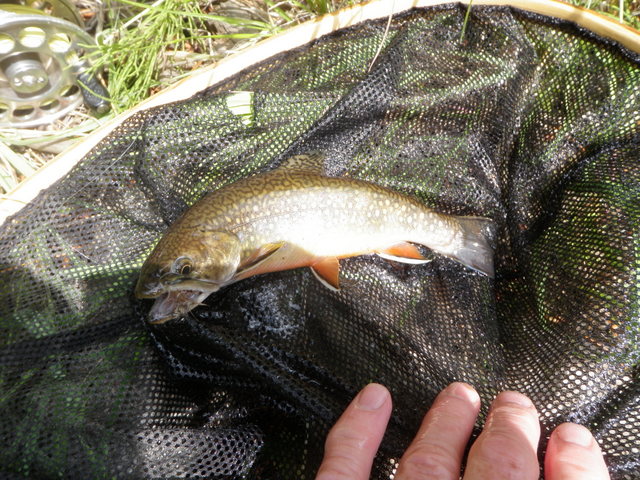 By 12:30PM I grew weary of the tough wading and the lack of size of the fish. I was distracted by thoughts of lunch and larger fish, so I packed it in and drove north through Estes Park to the Big Thompson River below Estes Dam.