A snowstorm on Sunday deposited three or four inches in Stapleton, but according to news reports it delivered a foot to Boulder and the front range foothills. The weather forecast predicted highs of 60 degrees in Denver on Wednesday and Thursday, and I targeted one of these days for a late season fishing adventure. I dropped the Santa Fe off at the auto body shop on Monday for repairs to the bumper after a minor rear end incident on an earlier fishing trip to Boulder, and this reduced Jane and I to two cars. Adding to the logistical challenge of getting away for some stream time, the 1998 RAV displayed battery woes, and I was unable to start it on Tuesday. With Jane’s assistance we started it using jumper cables, and I immediately drove it to the nearby Brakes Plus. The man at the counter checked the schedule and committed to a diagnosis on Wednesday. Our two person family with three vehicles was now reduced to one on Wednesday, and I was reluctant to strand Jane with no transportation, so I delayed my fishing plans to Thursday. 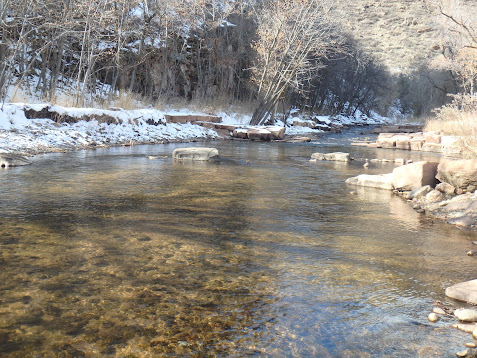 Fortunately Brakes Plus lived up to their commitment, and they replaced the battery in the RAV on Wednesday. Jane needed her Forte for tennis permanent court time on Thursday, so my fly fishing venture was dependent on the twenty year old RAV 4. Originally I selected Boulder Creek within the city of Boulder as my destination, but when I checked the flows, I noticed a 10 CFS spike on Tuesday and Wednesday. I suspected that this resulted from low elevation snow melt from the dumping on Sunday and Monday, and I never enjoyed much success under these conditions. I checked the North Fork of the St. Vrain, and the graph displayed a nice even line at 28 CFS. Of course this was measured at the outflow from the dam, and melting snow would impact the conditions below that location, but I surmised that there was less distance for run off effect.

I stuffed all my gear in the tiny RAV 4 and departed Denver by 10:30AM on Thursday morning. The air temperature was already at 54 degrees in Denver, and by the time I pulled into a parking space at Lavern Johnson Park, the temperature in Lyons was 58 degrees. Thursday evolved into a very mild sunny day in Lyons and Colorado, and I was optimistic that I might land some late season trout. Before I paid my $5 fee for four hours of parking, I visited the rest room and checked out the stream along the way. The creek was crystal clear and flowing at 28 CFS. Residual mounds of snow were evident in the shade, and full scale thawing was in effect, but I concluded that the conditions were favorable for a few hours of fly fishing. 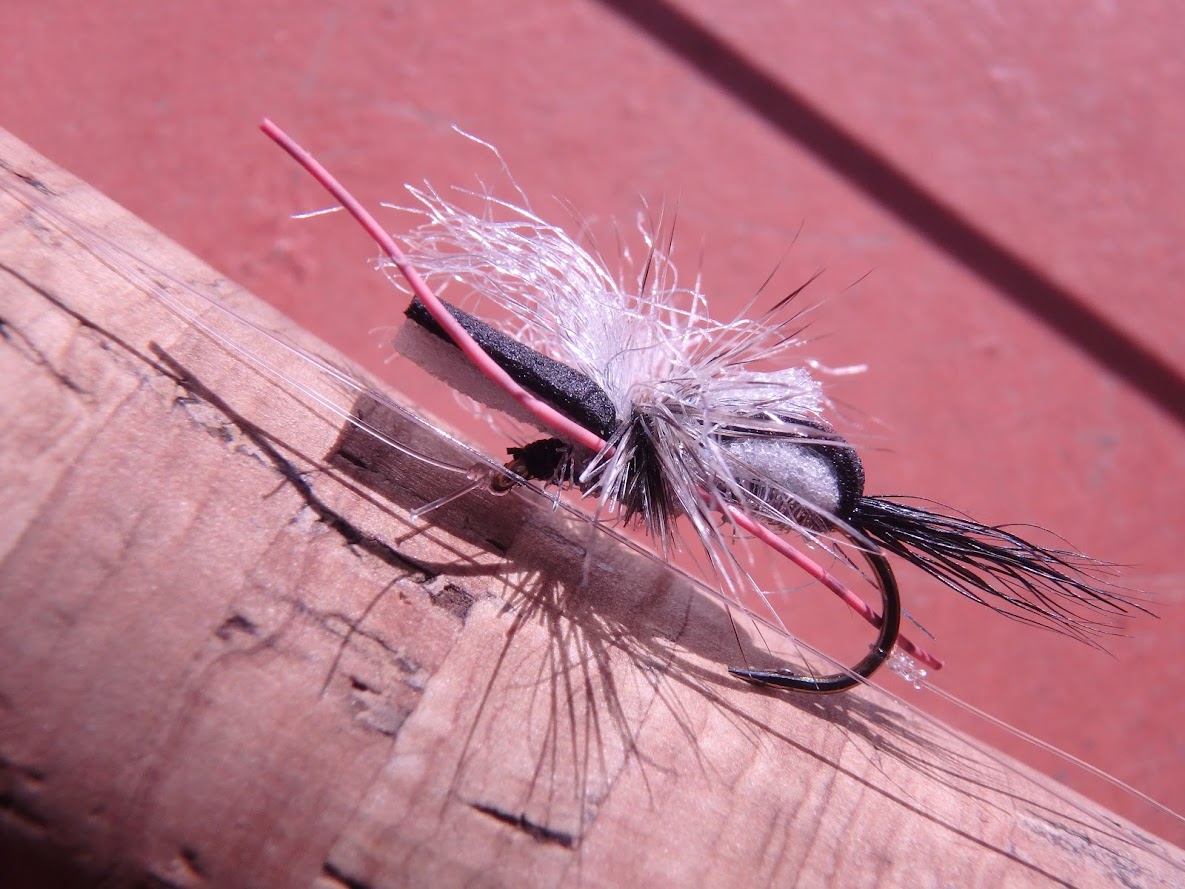 I rigged my Orvis Access four weight and quickly strode across the park to the downstream border with private land next to the RV camping space. I knotted a silver ice dub body hippy stomper to my line and added a beadhead hares ear on a 3.5 foot dropper, and I began to prospect the small stream. The St. Vrain in the park forms a  huge horseshoe, and man made dams and rocky stream improvement structures create a series of deep pools and eddies throughout the public area. These were my prime targets, although I allocated a few casts to the deep runs and pockets in between the human creations. The stream improvement project evidently was a response to the 2013 flood.

After thirty minutes of focused fishing I recorded only a rude refusal to the hippy stomper, so I paused and found a picnic table in the sun, whereupon I consumed my small lunch. At 12:15 I resumed my quest, and I added a beadhead ultra zug bug to my offerings. Finally in a deep shelf pool along the current seam formed by a deep run, I connected with two small brown trout. The first extended to eight inches, and I paused to snap a photo. This proved to be a fortuitous choice, as it represented the first and largest fish of the day. 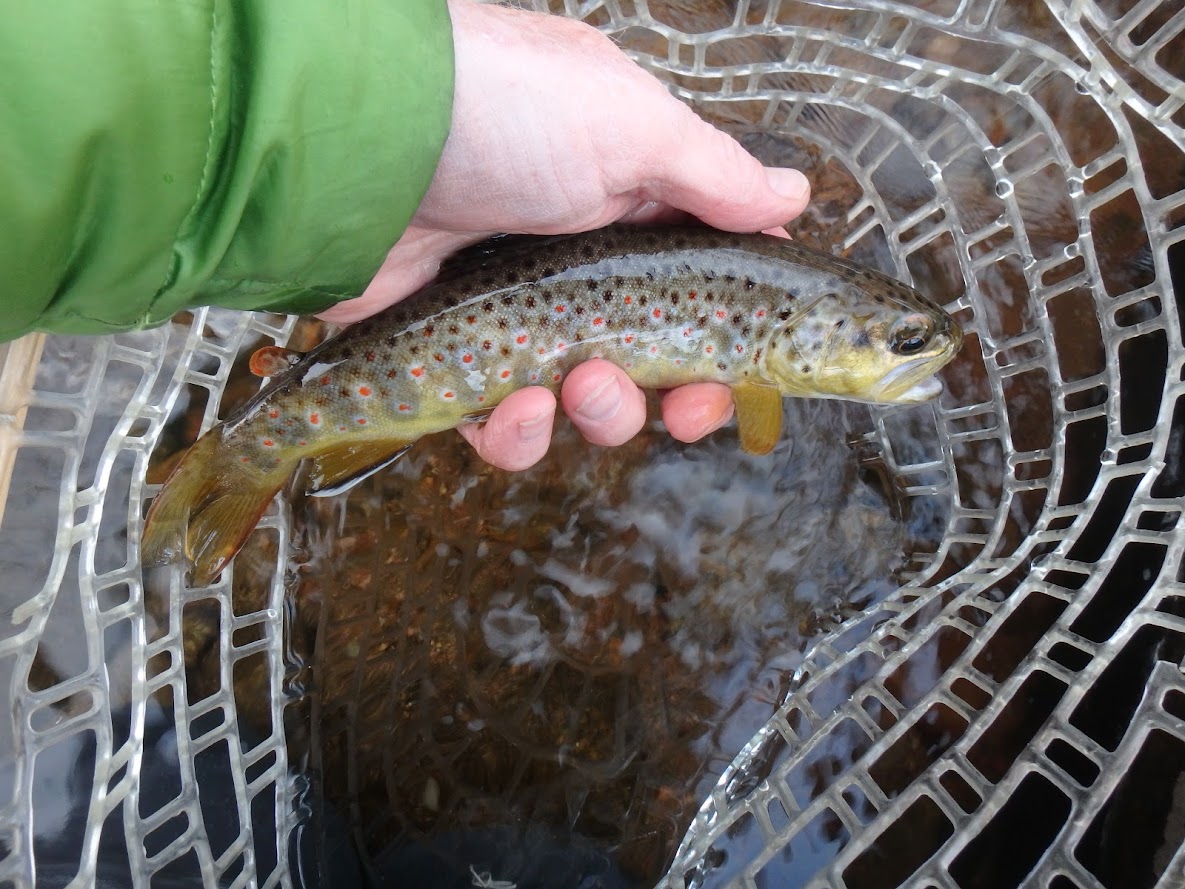 My optimism elevated somewhat, and I continued around the curve and into the sunlight in the western section of the horseshoe. Although the temperature was nearly sixty degrees, my wet hands sent out a stinging sensation, while I dwelled in the shade from the steep hill on the south side of the creek.

One of the first places I encountered when I migrated into the sunshine was a long clear pool, and I sprayed some long casts through the bottom end of the area. A deep trough bordered the left bank next to a large rectangular rock, and I shifted my back cast to the right in order to angle a cast to the left side. I was surprised and depressed, when I discovered that I wrapped the trailing nymphs around an overhanging branch high above the creek. I was very reluctant to write off three flies, but the limb was out of reach, even when I climbed to the top of the bank. Finally I conceded to the tree and grabbed the leader as close to the hippy stomper as I could, and gave the line a strong steady pull. The tippet snapped below the hippy stomper, so I salvaged the largest and newest fly, but the two nymphs taunted me from their perch near the end of the overhanging branch.

I was about to replace the nymphs with a new set, when I developed another scheme. A jumble of dead branches was visible at the base of a tree on the opposite side of the creek, so I waded across at the tail of the pool and lifted the longest of the cluster. It was quite thick and extended to twelve feet, so I grasped it in the middle to balance the weight and lugged it back to the top of the high right bank. I used the clumsy branch like a jousting pole and managed to thrust the tip into the monofilament jumble and then lowered it toward the ground. Amazingly I snagged the ultra zug bug in the split in the end of the long pole, and I quickly recovered it, but the hares ear was no where to be found.

I congratulated myself for recovering two out of three, but then I made one last inspection of the branch dangling high above the creek. I spotted another tangled mass of line, and I concluded that it was the end of my dry/dropper rig, and a beadhead nymph dangled from the mess. I deployed the battering ram one more time and thrust it into the tangled web, and once again I succeeded in stripping the line from the tree. I placed my impromptu tool on the ground and rushed to the tip, where I discovered a previous angler’s line and a decaying beadhead nymph. The bead and hook were all that remained of an aging unidentifiable nymph imitation. I took credit for removing the fishing waste from the tree and returned to reconfiguring my line.

Since I was faced with nearly a total rebuild, I used the interruption to swap the silver hippy stomper for one of my trusted peacock body versions. I replaced the ultra zug bug and hares ear with fresh versions of the same flies, and I resumed my casting in the attractive pool. Of course I was extremely conscious of the streamside trees during my return engagement to fly fishing St. Vrain Creek. 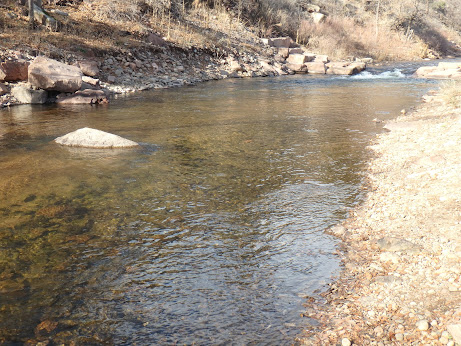 The head of the pool paid dividends, when I connected with two additional small brown trout on the hares ear, and then I moved to the next attractive man-made structure. At some point during this interval a fish rose to the hippy stomper, and I quickly lifted the rod tip and felt a solid connection. This fish was clearly larger than my previous catches, but I was disappointed to discover that it was foul hooked after refusing the foam attractor. The victim of this inadvertent hook up was a stunning rainbow trout with a wide orange-red stripe along its side. I was disappointed with the foul hook, but I was excited to discover the existence of rainbow trout in the Lavern Johnson Park stretch.

During the remainder of my time on the creek I curled around the northwest section of the bend until I reached the huge pool just below the Riverbend dance floor, where Dan and Ariel performed their first dance on September 14. Along the way I notched a fifth small brown trout to finish the day at five. Five is a relatively low total, and the size of the fish was in the six to eight inch range, but I was nonetheless pleased with my small level of success. The sun was bright, and the temperature approached sixty degrees, and I escaped a skunking during ice cold snow melt conditions. A five fish day on November 15 is always welcome in my book.