My daughter, Amy, visited from Portland, OR, over the long weekend, and I deferred all fishing ventures until her departure. I did, however, review the stream flows and weather forecasts, while she remained in Denver, and the predicted high temperatures on Tuesday and Wednesday suggested a couple days of fall fishing. Initially I hoped for a trip to one of the backcountry streams, that I discovered in 2019 or perhaps to South Boulder Creek, but as the day approached, the weather forecast worsened, and this forced me to re-evaluate my planned destination.

Predicted highs on Tuesday and Wednesday in the Colorado mountains sank to the mid-forties accompanied by wind, and I was not anxious to endure that level of adversity. Highs in Boulder, Lyons and Denver; however, were expected to be a more comfortable sixty degrees, so I opted for a relatively short trip to the Button Rock Preserve area of the North Fork of St. Vrain Creek. Nine mile per hour wind speeds were a bit concerning, but I confronted similar conditions on many occasions and managed success. Jane decided to accompany me, and we stopped in Louisville, CO to add our grand puppy, Zuni, to our road trip group.

When we arrived at the Button Rock Preserve parking area at 11:50AM, the dashboard thermometer registered 55 degrees, and a fairly steady breeze ruffled the remaining leaves of the nearby trees. I probably overreacted to the weather, when I pulled on my North Face light down coat, and then I assembled my Orvis Access four weight. Jane and Zuni sped off upon our arrival, but I eventually caught them, and we continued our inbound hike for a mile, until I angled down a manageable slope to the creek. Jane and Zuni watched, as I scrambled over some dead branches, and before they attempted a similar descent, we spied a small herd of deer. A doe and three young ones browsed along the dirt road twenty yards above us, and Zuni immediately demonstrated a strong willingness to give chase. Jane resisted these efforts and somehow managed to control Zuni while negotiating the tricky rock and log strewn bank to arrive at the creek. Eventually the deer disappeared behind a large boulder on the opposite side of the road, but Zuni would not relax, until they were gone.

Since it was 12:40PM when I arrived streamside, I extracted my sandwich and carrots and made quick work of my lunch, before I began my quest for St. Vrain trout. The stream was 21 CFS, and this was fairly average for October. I avoided a large foam hopper as the top fly due to low clear flows and instead opted for a size 10 Chernobyl ant. I was skeptical that fish would rise for surface offerings, so I added a chartreuse copper john as the top fly and a salvation nymph on the end. The copper John displayed a nice shade of light green similar to a caddis larva, and it also provided additional weight to enable deep drifts in the cold autumn water. 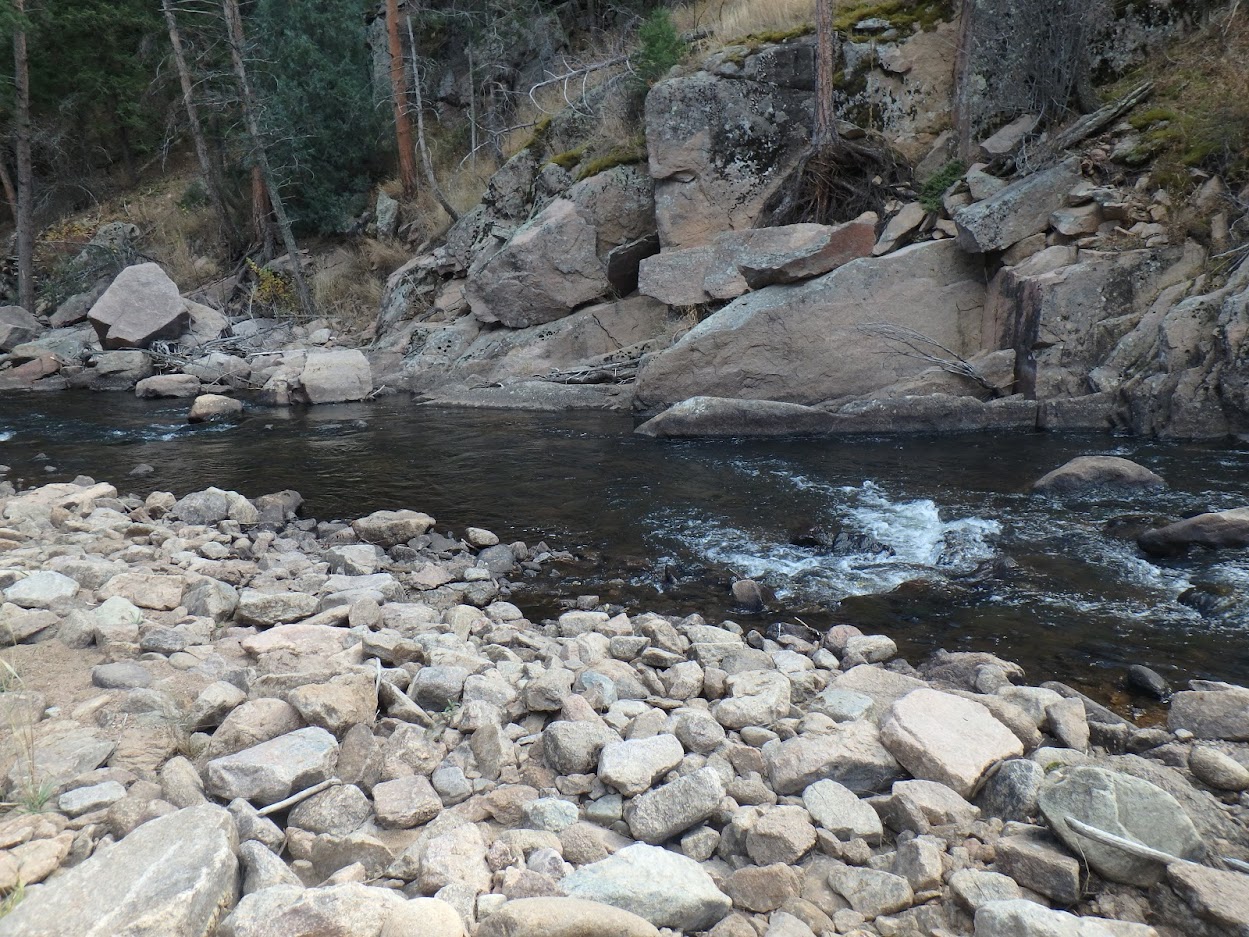 Within the first half hour I landed three small trout in the first four pools, that I prospected. The first fish was a barely six inch rainbow trout that grabbed the salvation. Next a six inch brown nabbed the salvation as well, and then an eight inch rainbow nipped the Chernobyl ant. The aggressive ‘bow refused the foam dry twice and then circled back and smacked the attractor, just before it accelerated at the tail of the pool.

Amazingly this early action was the highlight of my day. For the next hour I continued upstream at a steady pace and covered the attractive deep runs and pockets with the dry/dropper combination, but four or five tiny trout under six inches were my only reward for persistence. The weather, meanwhile, deteriorated; as some large clouds blocked the warming rays of the sun. The absence of solar energy prompted the wind to gust, and I pulled on my raincoat as a windbreaker to block the chilling impact.

At 2:15PM I approached a nice long smooth pool, and coincidentally Zuni and Jane appeared on the opposite bank. Zuni’s excitement level elevated as indicated by her rapidly wagging tail, when she spotted me, but she was reluctant to wade into the icy flows of the North Fork. I surveyed the long pool and noticed a pair of random rises, and since the dry/dropper was not generating results, I removed the three flies and replaced them with a size 22 CDC blue winged olive. For the next ten minutes I sliced some upstream casts into the wind, and drifted the tiny tuft through the areas that revealed rising fish earlier. The fish ignored my dependable BWO imitaion, but additional sporadic downstream rises shifted my attention.

I initiated a series of across and downstream drifts, but again my fly was not in favor, until I allowed it to dangle in the current, while I gathered up excess line, and I was surprised to feel the weight of a fish. The small eater remained connected for only a second, but it was clear that movement was a necessary part of the deception. I fired some casts across and down and executed some poor mends that caused the fly to hop, and on three occasions a fish swirled at the tumbling fluff, but in each case the result was a refusal.

Zuni and Jane were clearly getting antsy to leave, so I surrendered to the small selective eaters, and I hooked my fly to the rod guide, as I prepared to wade across the pool to the bank next to the road. Somehow in the process of doing this I exerted excessive pressure on the line, and the CDC olive broke from the leader and dropped in the pool and began floating downstream. I took a couple steps in an effort to retrieve the fly but then realized that it was not worth the risk of a stumble and fall. I paused to watch the tiny tuft of CDC, as it floated toward the tail, and then in a split second flash a small trout darted to the surface and ate the detached fly! I spent ten minutes attempting to fool the choosy eaters in the pool, and the first drift of my unattached fly was consumed. I concluded that my leader was too short or perhaps not fine enough, but that was a change in strategy for another day.

I joined Jane and Zuni on the road, and we ambled back to the parking lot together. Tuesday was more about being outside with Jane and Zuni, and the fishing was secondary. The air temperature was acceptable, but the cutting wind converted fun into a chore. The North Fork of the St. Vrain is largely a brown trout fishery, and I suspect that the larger fish were occupied with the reproductive cycle. Three trout in 1.5 hours is an acceptable catch rate, but the puny size did not justify the difficult conditions. The seven day weather forecast is not encouraging for additional fishing in 2019.