Friday was a watershed day of 2019. It was my first visit to a Front Range stream since June 24 on the South Platte River, and that particular trip resulted in a skunking. My last successful day spent on the South Platte River or a tributary was June 14. I endured six weeks of high flows, that prevented me from venturing to nearby drainages for fly fishing in flowing water.

Jane and I had tickets for the Giants vs. Rockies game on Friday night, August 2, so my options were limited to streams within 1.5 hours of Denver. Even that relatively minimal time constraint meant I needed to quit fishing by 2PM in order to make a 1.5 hour return drive and prepare for departure to the game via the A Line. I reviewed the Front Range options and settled on the North Fork of St. Vrain Creek. Flows were reduced three days prior to 85 CFS, and I knew from prior experience that these were manageable levels for wading and edge fishing.

I departed my house in Denver by 8AM and arrived at the parking lot for the Button Rock Preserve by 9:30AM. The lot was half full, but I assumed most of the visitors were dog walkers. The Button Rock Preserve is an extremely popular dog exercising destination. I pulled on my waders and assembled my Sage four weight and hiked up the dirt access road to distance myself from the parking lot. Several fishermen tested the water below the Longmont Dam, and a spin fisherman was busy just above the inlet. These were the only competing anglers infringing on my two miles of water on Friday. 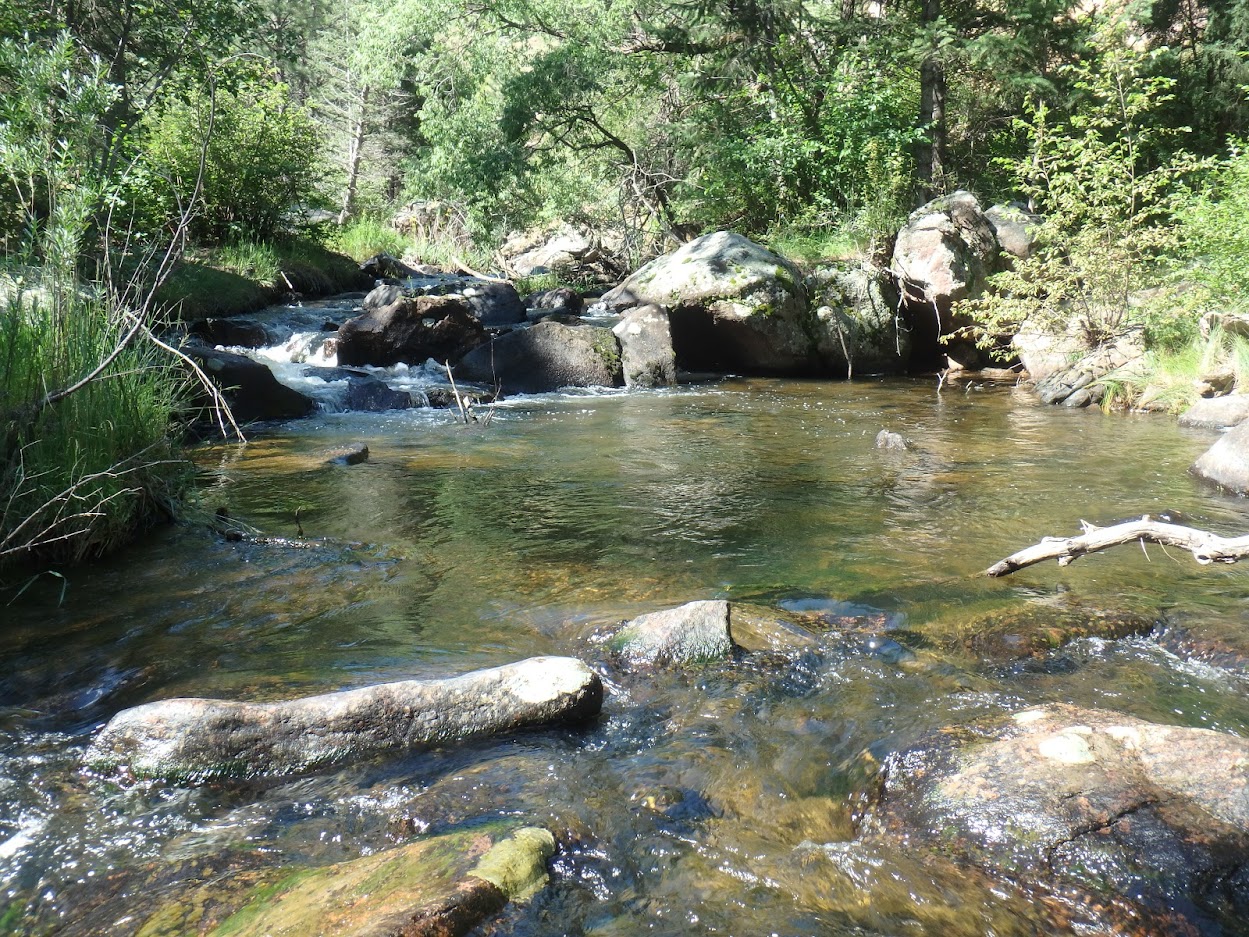 Perfect Pool, Yet No Fish

When I reached my intended starting point, I followed a hunch and tied a green drake user friendly to my line. I encountered green drakes on the St. Vrain within Rocky Mountain National Park, and I speculated that they might maintain a presence on the tailwater below Ralph Price Reservoir. Even if this was not the case, the user friendly might serve as a decent attractor mouthful for the cold water residents. 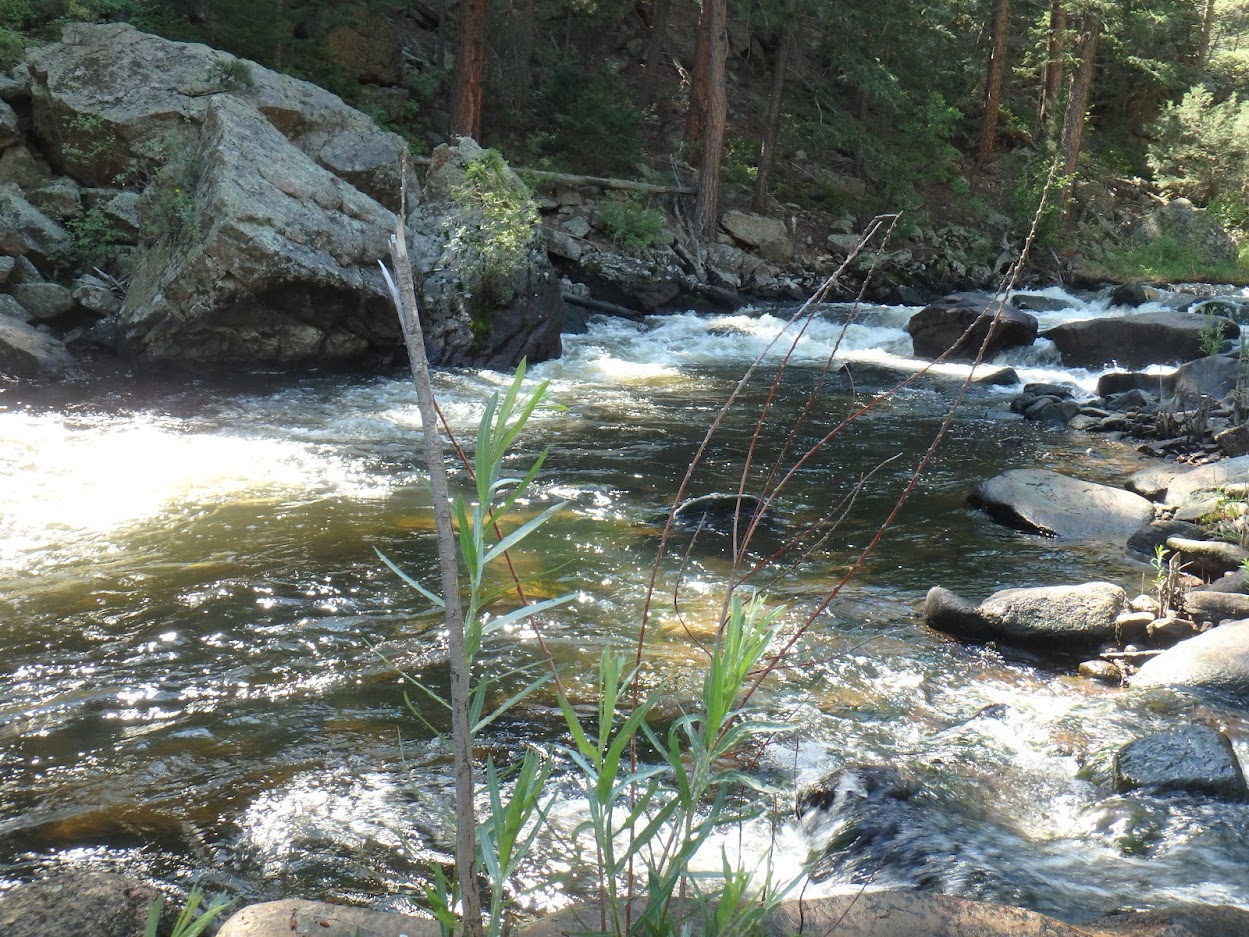 The Other Braid Around the Island

The hunch did not prove accurate, so I followed up the user friendly with a yellow stimulator, and this bold attempt to seduce trout to the surface with a dry fly was also rejected. I was certain that the pools that failed to yield willing fish contained a few wild occupants, so I converted to a tan pool toy and trailed a beadhead hares ear nymph. Finally I began to observe sporadic refusals to the pool toy and evidence of fish, but my strong desire to feel the weight of a thrashing trout on my rod was not satisfied.

I added an iron sally to the dry/dropper below the hares ear in an attempt to create more weight and deeper drifts, but this ploy simply resulted in extended futility. Between 10AM and 11:30AM I covered some very attractive water, yet the fish counter languished on zero. Could my return to Front Range streams result in a humiliating skunking?

I reflected on my morning and settled on one obvious fact. The fish were looking toward the surface and not interested in subsurface offerings the least bit. I noticed three or four refusals to the pool toy hopper but never connected with a fish with the two trailing nymphs. I decided to experiment with smaller dry flies. First I knotted a yellow stimulator to my line, and after ten minutes of prospecting it produced only a rejection. Very few insects were obvious, so perhaps the fish were tuned into terrestrials that accidentally tumbled into the stream. A Jake’s gulp beetle failed to tempt the trout, and I was back to staring at my fly box. 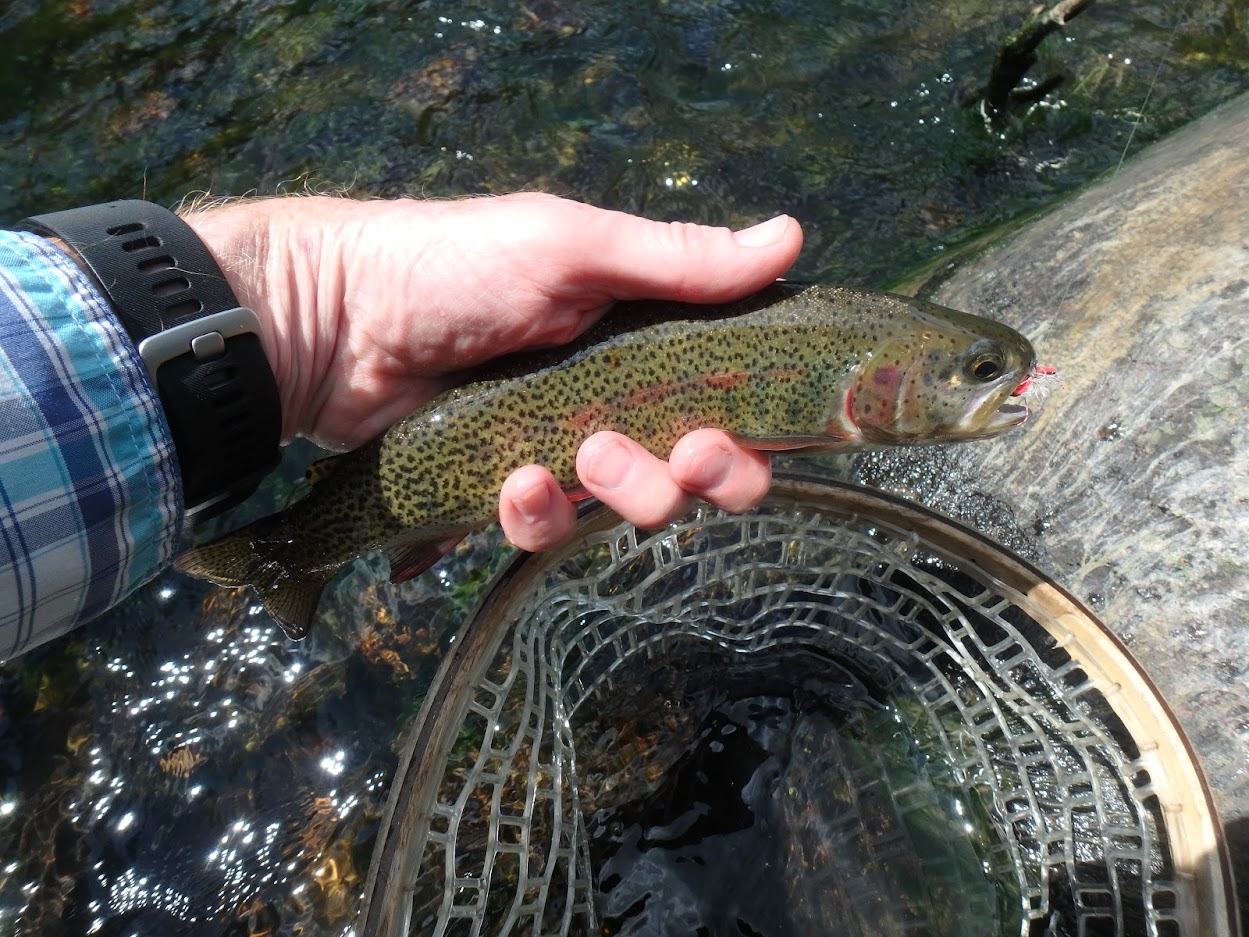 A hippie stomper saved many a day, so I decided to give one a tryout. Normally I default to a dubbed peacock body version, but the green drake user friendly was unsuccessful, so I chose to diverge radically from the norm and tied on a red-body hippie stomper. Voila! I stumbled into my first fish, when a ten inch rainbow slurped the foam attractor on a downstream drift. A skunking was averted, and I found a nice flat rock and munched my lunch, while I observed a nice run in front of me. 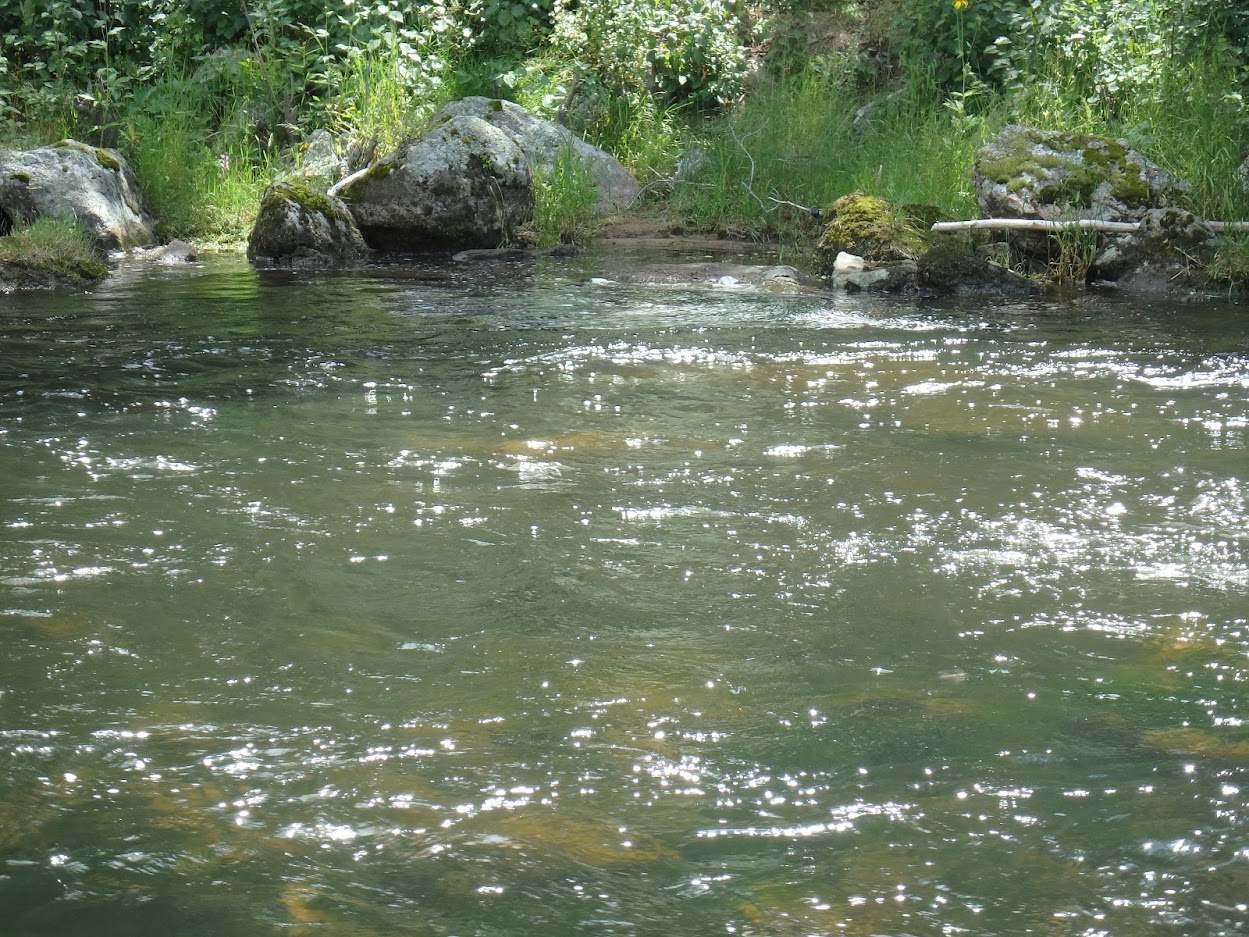 After a quick bite I resumed my upstream progression with the red hippy stomper, and within fifteen minutes I approached a gorgeous long deep run with a soft shelf pool along the opposite bank. For some reason I added a bright green go2 caddis pupa and a salvation nymph, and I began to flick backhand casts to the top of the run. On the first two drifts trout flashed to the hippie stomper and turned away at the last instant. I persisted and eventually tempted two browns and a rainbow to grab my flies. The rainbow nabbed the go2 caddis pupa, and the two browns latched on to the salvation nymph. The last brown to come from the quality run measured twelve inches and was my best fish of the day. 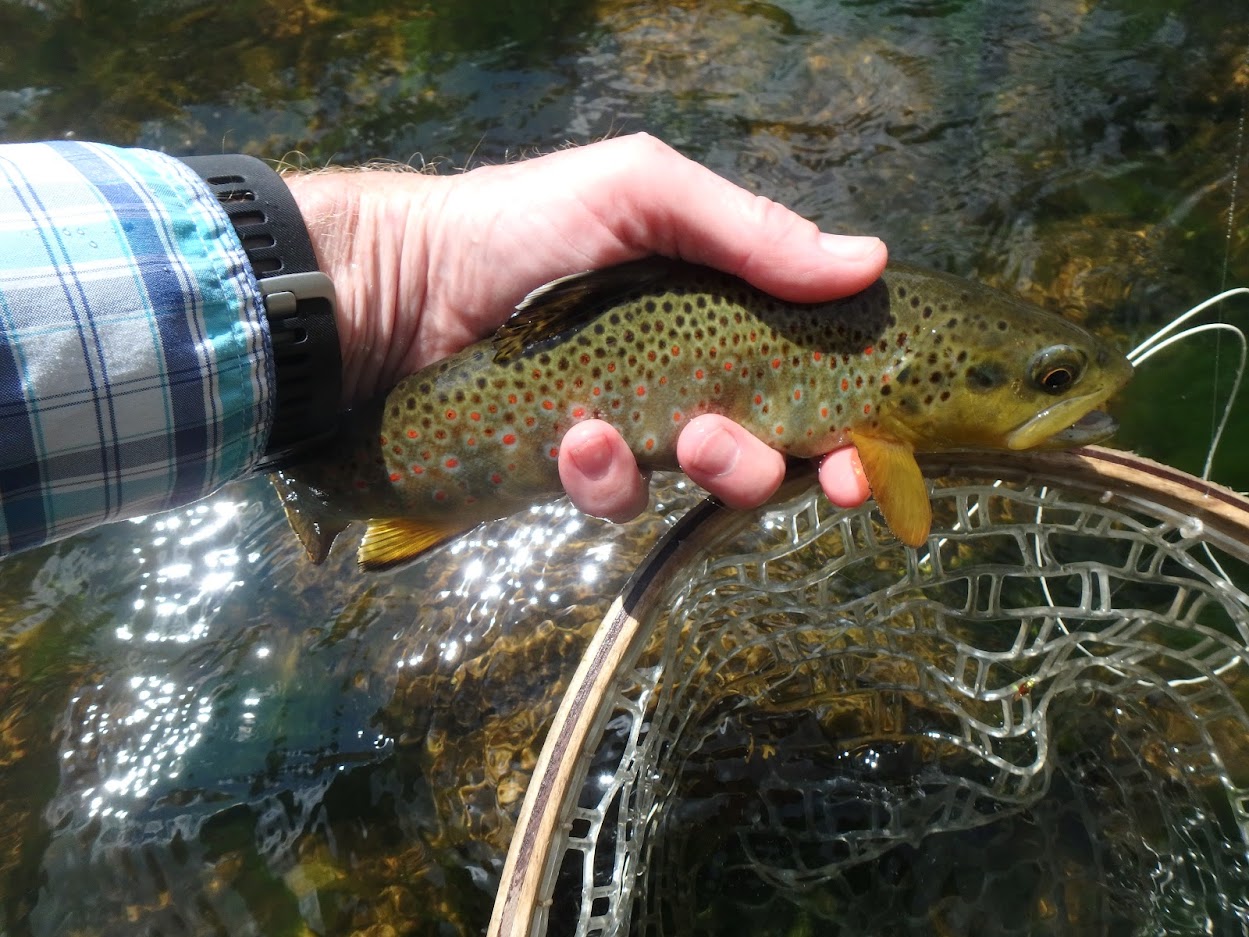 Easily the Best Fish of the Day

During my remaining time on the water I persisted with the three fly dry/dropper, and I increased the fish count from four to ten. I moved fairly quickly, and my confidence soared, as the catch rate elevated. For some reason the salvation nymph became a food item of choice, as five of the last six snatched the iridescent nymph from the drift. Another rainbow darted to the surface and mauled the red hippie stomper. For some reason rainbows seem to be attracted to bright colors more than brown trout. 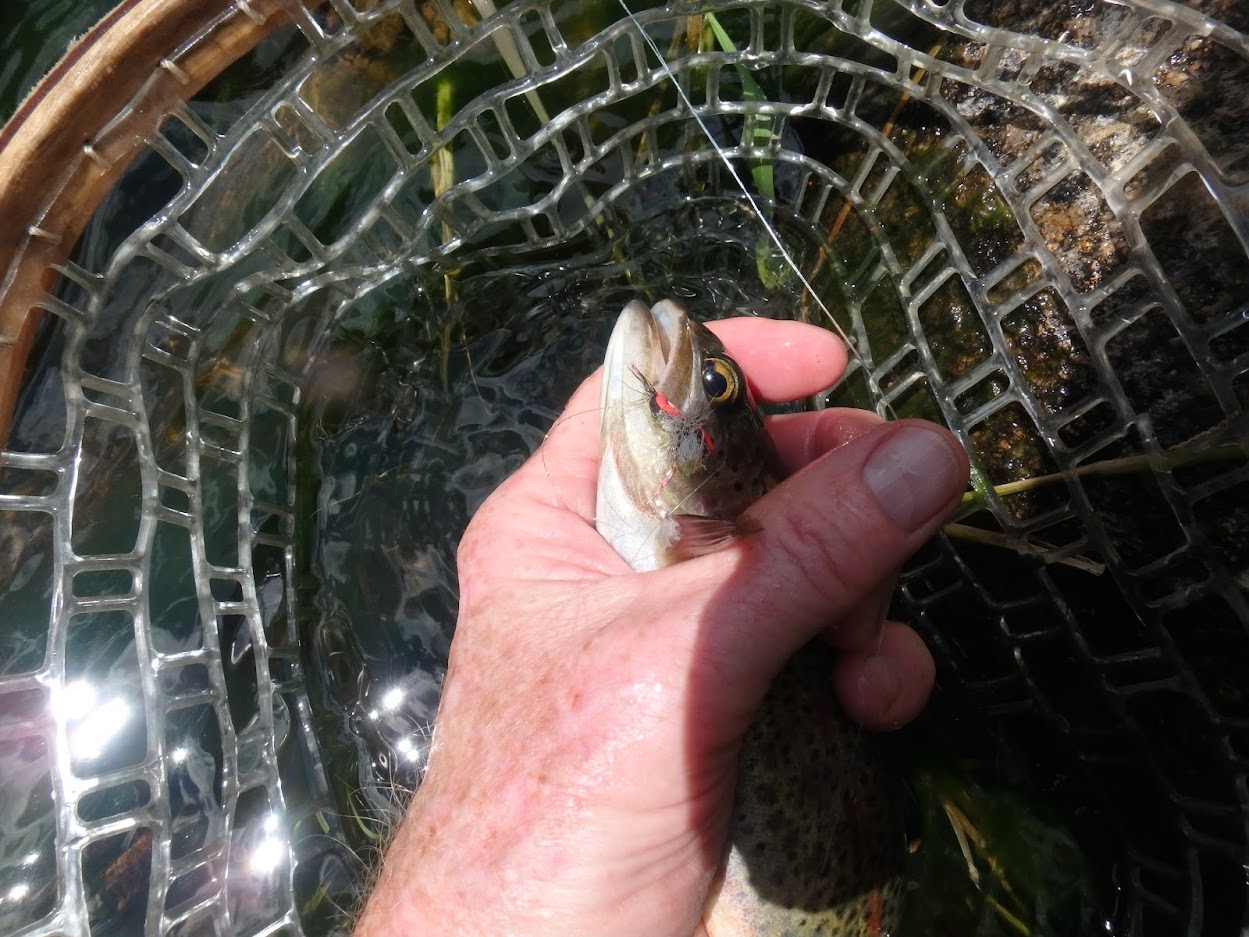 Stomper in Corner of the Mouth

I landed number ten at 1:25PM, and with double digits in hand, I decided to hustle back to the car in order to meet my targeted departure time for the Rockies game. What a strange day Friday evolved into. During the morning I feared a skunking, and for some reason the fish began to eat between noon and 1:30PM. Did I progress to less pressured water? The entire area that I covered was a decent hike from the parking lot, so I doubt that location explains the sudden shift in success. I was in a tailwater and relatively close to the dam, so I believe that it took all morning for the water temperature to rise to a level, where the trout became more active. I suspect that the higher catch rate would have continued for another couple hours had I been able to remain at Button Rock Preserve. Friday was another fun day on the North Fork of St. Vrain Creek, and I will certainly return, although I will not rush to arrive early. 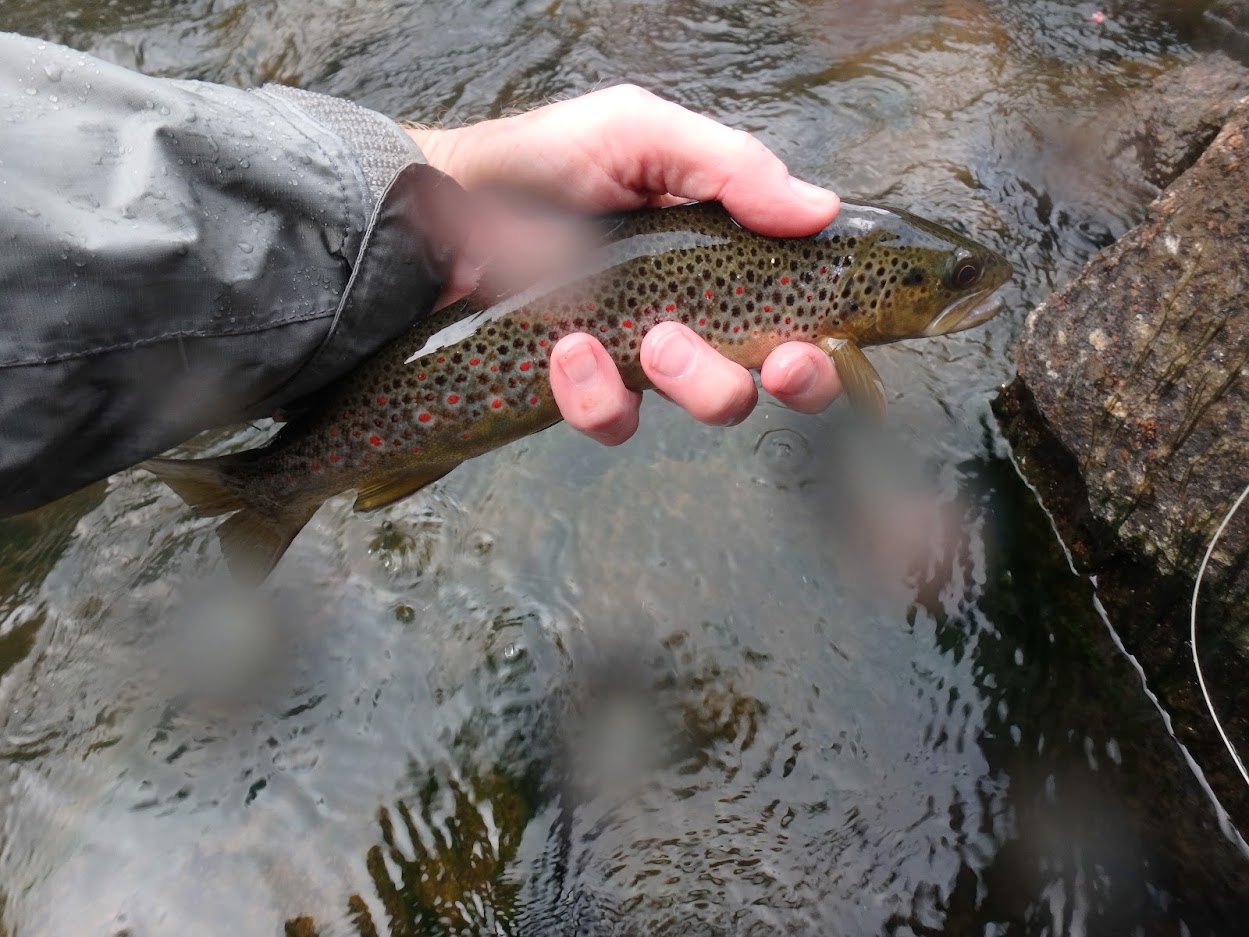 Between the Water Spots 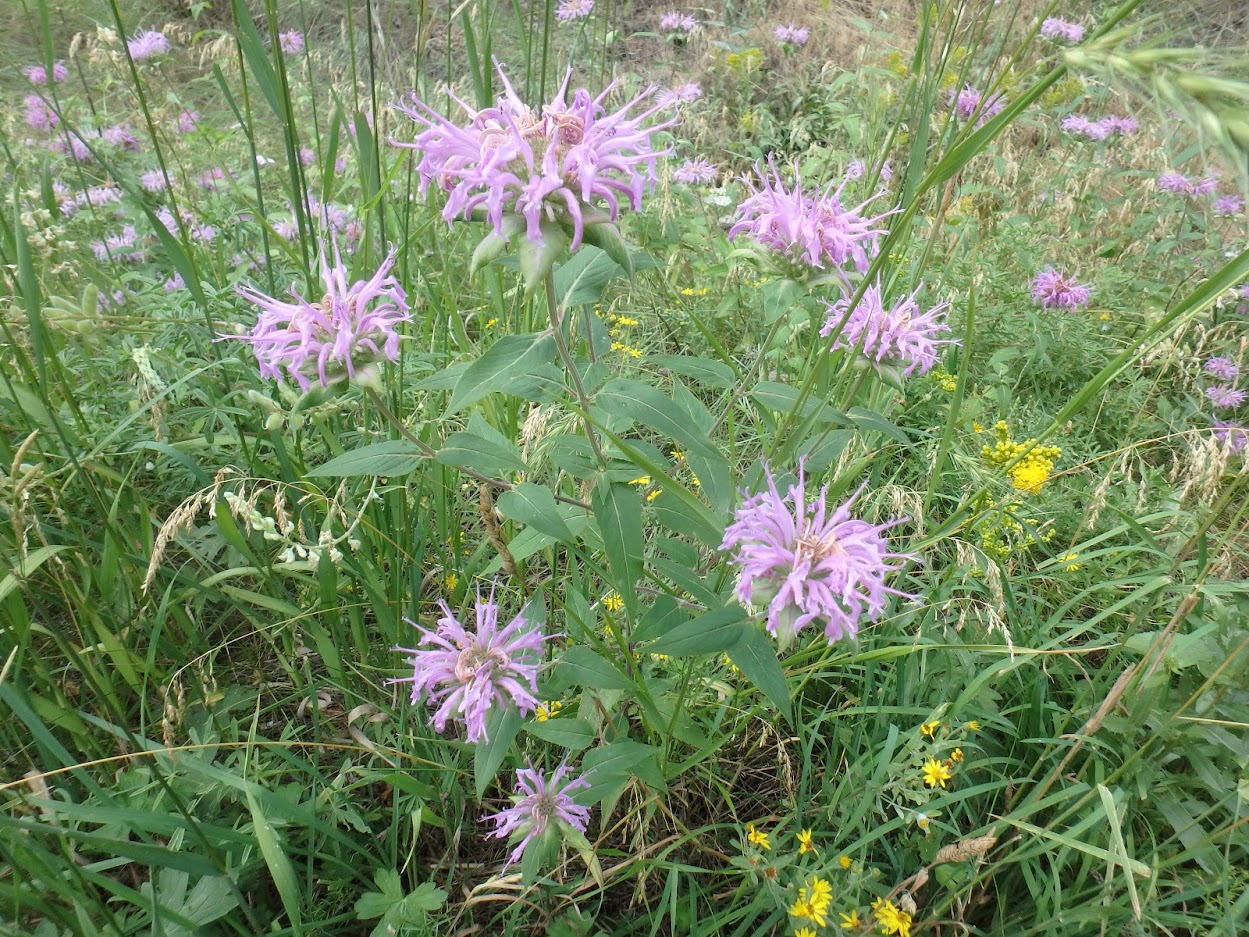