Thursday’s fishing adventure was the polar opposite of Tuesday on the Colorado River. The results were also on the opposite end of the spectrum, but the one consistency was the continuing heat wave in Colorado. July and September are generally my most productive fly fishing months. so I felt a strong impulse to utilize the summer prime time to rack up fly fishing hours. As is my practice, I evaluated all the Front Range streams, but some of my favorites continue to crash through their drainages at very high rates. The two exceptions to this condition were the North Fork of St. Vrain Creek and the Cache la Poudre River. I decided to sample the closer North Fork of St. Vrain Creek on Thursday, and planned a longer trip to the Cache la Poudre River in the canyon west of Fort Collins on Friday.

My last trip to the St. Vrain took place on 06/24/2020 with Dan, and it was essentially a bust from a fishing perspective, so I was a bit apprehensive about another visit. The water gauge below the dam registered 68 CFS, and that elevated my optimism, although the flows dropped from 90 CFS to 68 CFS twenty-four hours earlier. I generally try to avoid fishing within the first couple days after significant flow changes, but a downturn is usually less disruptive than a large increase. I rolled the dice and made the one hour and fifteen minute drive to the Button Rock Preserve northwest of Lyons, CO. 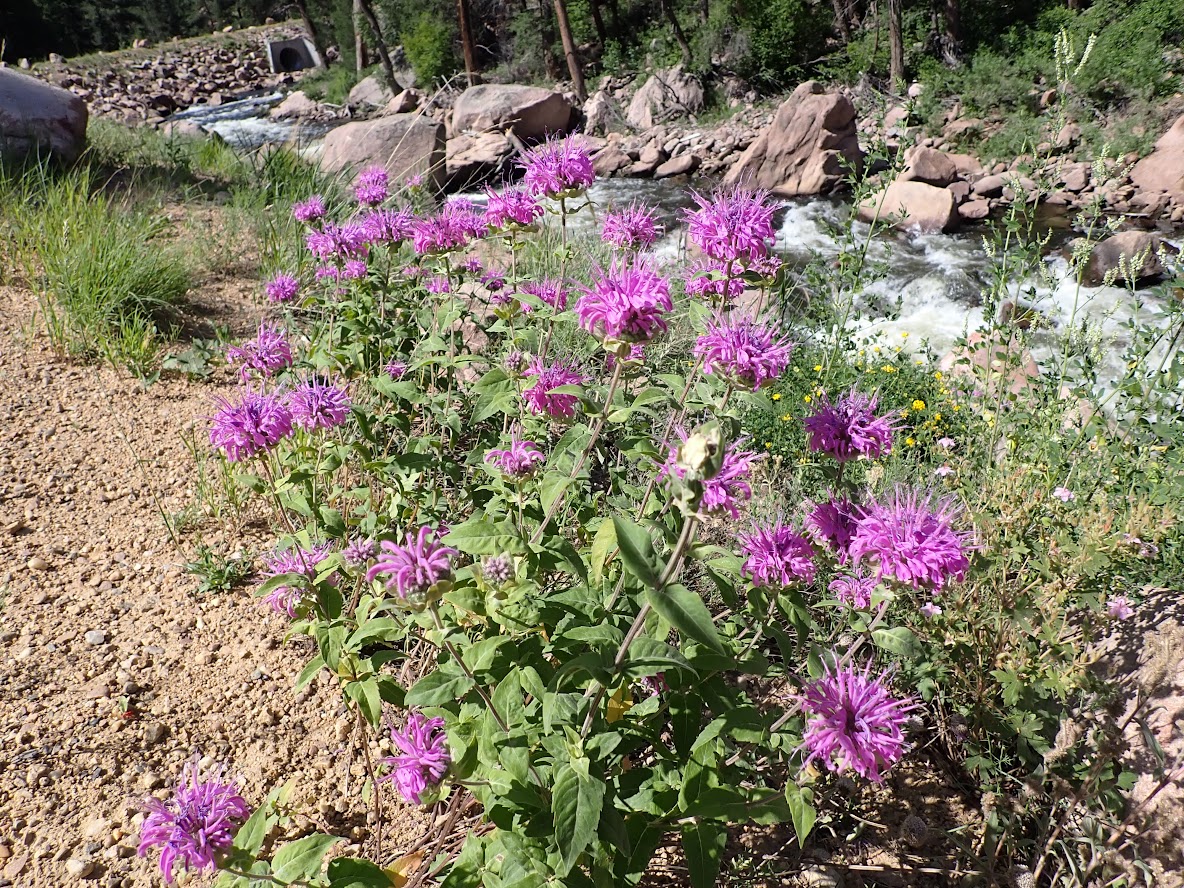 As I mentioned at the outset of this piece, the heat wave that settled over Colorado continued on Thursday, and the warm temperatures prompted me to undertake my first wet wading effort of the year. It proved to be a solid decision, and I thoroughly enjoyed the ice cold flows, while the air temperature soared to the upper eighties. Unfortunately trout did not appear to adapt as readily to the high temperatures. I fished from 11:00AM until 2:00PM and landed five small trout including three browns, one rainbow, and one cutbow. The creek was clear and cold, and the flows were very conducive to successful fly fishing. Insect activity was largely absent, and this might explain the lack of action. After lunch I noticed a couple pale morning duns and a single yellow sally, but that was the extent of my observed food sources. 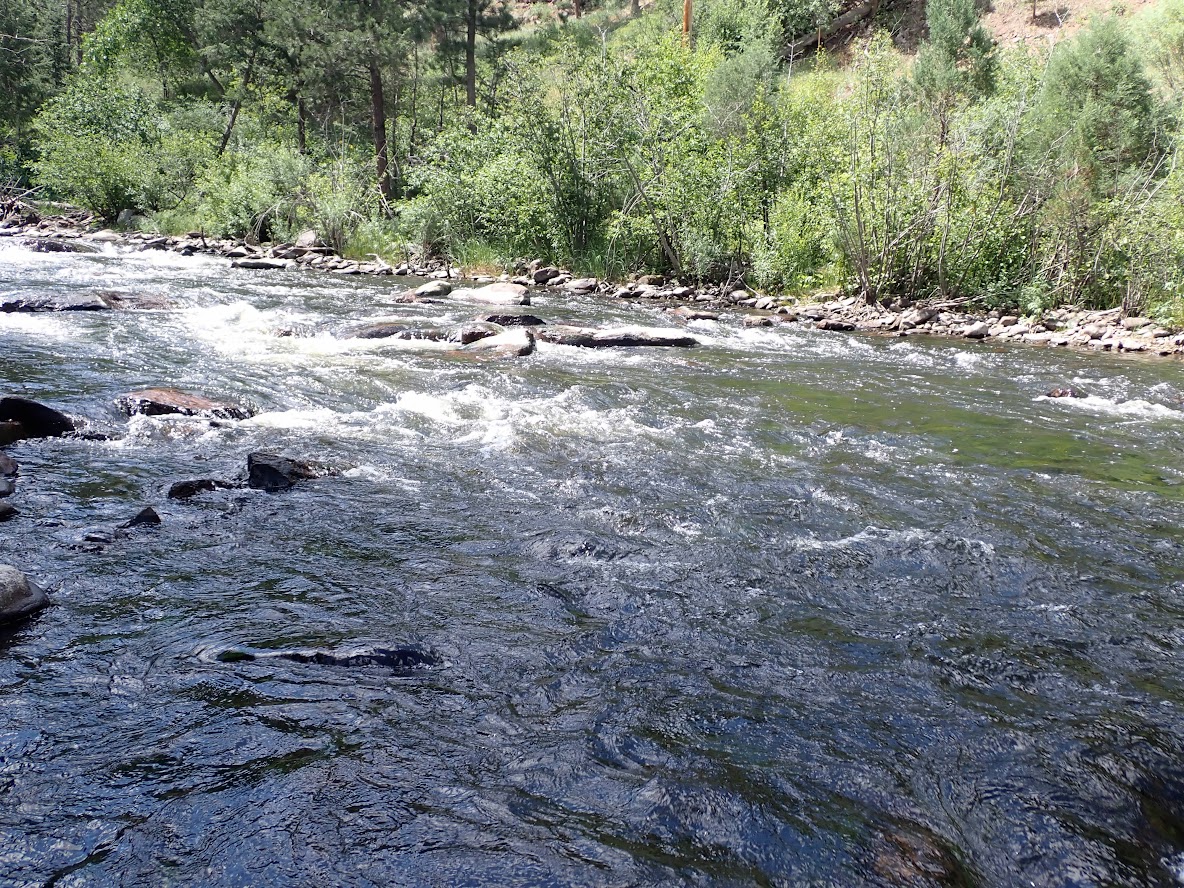 Slick on the Right Looks Promising

I broke for lunch at 11:45 and landed four of the five fish in the first forty-five minutes. This is an indicator of how slow my early afternoon was, when the temperature climbed into the eighties. I began my day with a yellow fat Albert, beadhead hares ear nymph and salvation nymph; and the salvation produced three of the morning catches. The other trout gobbled the hares ear. After lunch a lengthy period with no action transpired in spite of some very attractive structure, I began to cycle through a variety of flies. I swapped the salvation for a beadhead emerald caddis pupa, and then I exchanged the hares ear for an iron sally. These flies were totally ignored, however, a couple looks and refusals to the fat Albert caused me to reconsider my approach. If the fish were looking toward the surface, perhaps a single or double dry approach would release the lock on the fish counter? I experimented with a size 14 gray stimulator, size 14 yellow stimulator, a size 14 deer hair yellow sally, a size 16 gray deer hair caddis, and a size 16 light gray comparadun. The stimulators and gray deer hair caddis spurred refusals, but none of the imitations yielded a trout to my net. 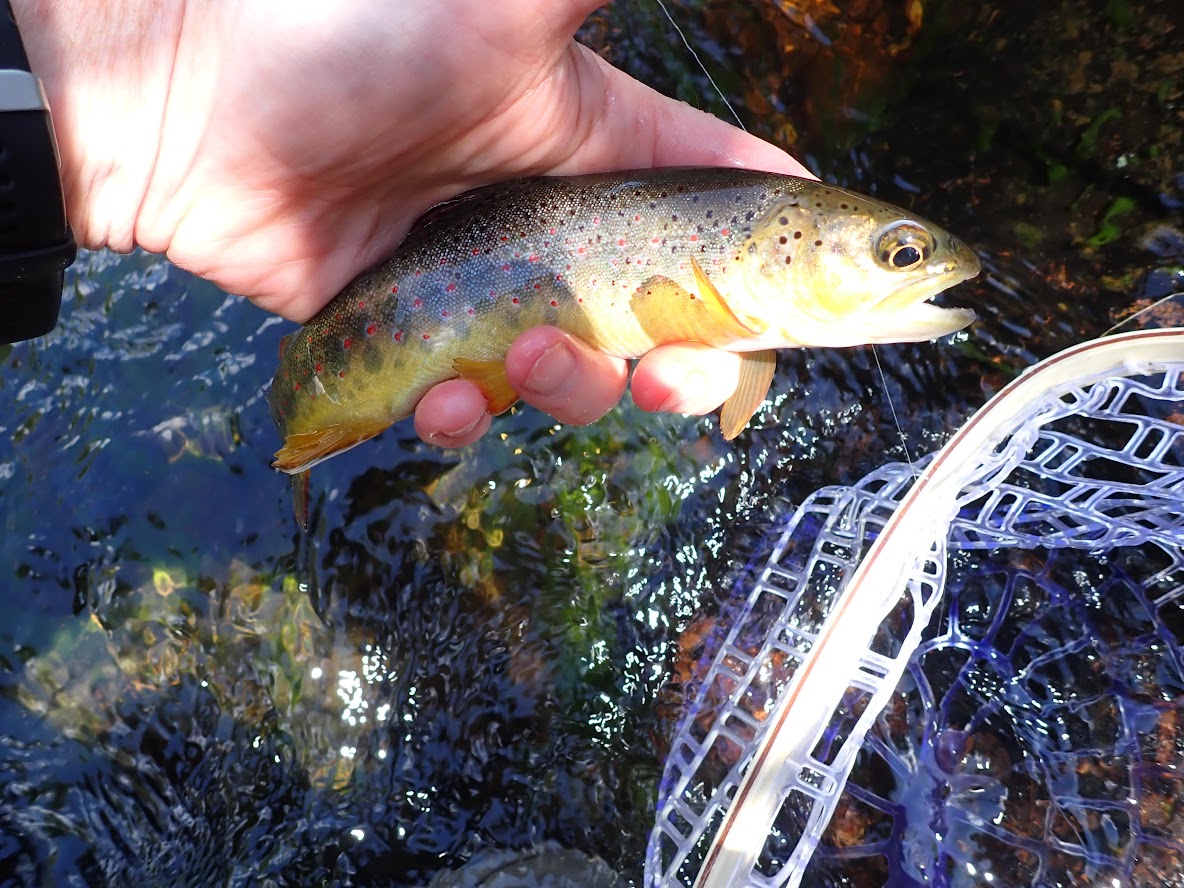 In a last ditch effort to dupe the St. Vrain trout with dry flies I tied a peacock hippie stomper to my line, and then copying from my Tuesday guide on the Colorado, I trailed a gray caddis eight inches behind the stomper. Both the hippie stomper and caddis attracted refusals, but the persnickety trout were apparently looking for something else. I finally abandoned the dry fly approach and returned to dry/dropper with a size 12 prince nymph and size 16 fusion nymph trailing the hippie stomper. At the lip of a long deep run a cutbow snatched the fusion nymph, as I began to lift it to complete another cast. 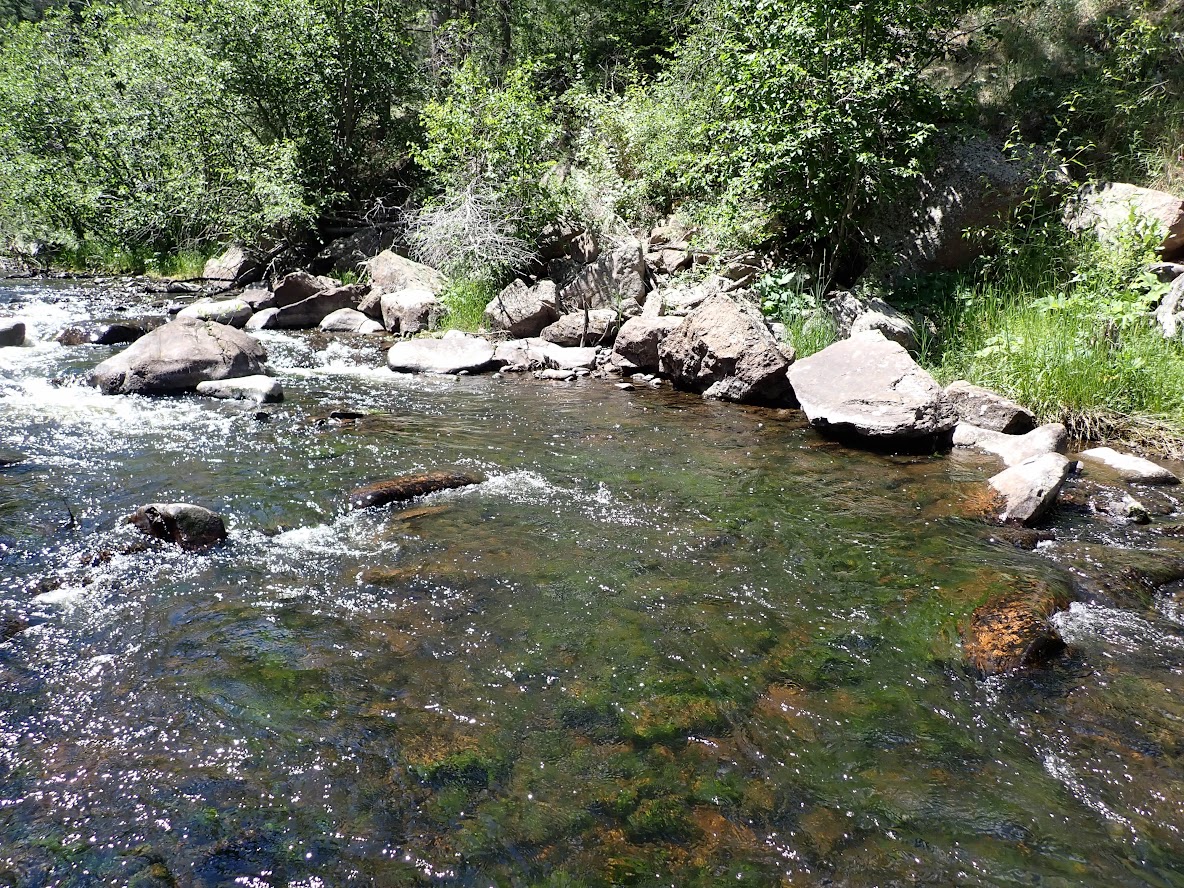 Area to the Right Beckons

After releasing the cutbow I continued fishing for another fifteen minutes, but at 2PM the stream ahead look less appealing, and I decided that the slow catch rate and diminutive fish did not justify additional time on the St. Vrain. I hooked my fly to the bottom guide and hiked back to the car. Thursday was a rough day on the North Fork of St. Vrain Creek. It was the second unproductive visit in a row, and I blame the heat and the lack of insect availability. The recent change in flows may have also played into the situation, with the stream residents requiring more time to adjust.

Five trout in three hours of fishing is not a ridiculously poor showing, but the size was very disappointing. The largest fish was perhaps nine inches, and most were in the six to seven inch range. The ice cold creek kept me very comfortable, and that was probably the highlight of the day. I will seek other options, before I make a return visit to Button Rock Preserve.