My son, Dan, sensing that the long hours of daylight were sliding by rapidly in 2020, while simultaneously lamenting that he was not taking full advantage of living in Colorado, decided to remedy the situation and organized a longest week medley of outdoor activities. The outdoor ventures were scheduled to begin after work, and they were made possible by the abundance of daylight. Dan named his initiative his “longest week”, although technically the five days that were included did not represent the five longest days of the year. The series began with trail running on Monday, road biking on Tuesday, mountain biking on Thursday, and hiking on Friday. The astute reader will note that Wednesday is missing, and that is because Wednesday was earmarked for fly fishing. I agreed to join Dan for an evening of fly fishing on Wednesday, June 24.

While Dan was occupied with the task of earning a living, I took advantage of my retired state and researched fly fishing options. Continuing snow melt along the Front Range escalated the difficulty of my challenge, but I narrowed the options to the Cache la Poudre River in Fort Collins, the North Fork of the St. Vrain at Buttonrock Preserve, and South Boulder Creek below Eldorado Canyon State Park. I also suggested a few lakes, but neither Dan nor I are proponents of stillwater fishing, so that option never received serious consideration. South Boulder Creek below Eldorado was within six miles of Dan’s home, but the reported flows were 145 CFS, and we were both unfamiliar with the stretch under consideration. The North Fork of the St. Vrain registered flows of 107 CFS, and the Cache la Poudre in Fort Collins was tumbling along at 130 CFS. From a flow standpoint the Poudre was probably the best choice, but we elected the North Fork of the St. Vrain due to proximity and familiarity. I researched this blog and found four outings to Button Rock Preserve, when I enjoyed decent success at comparable flows.

I met Dan at his house at 3:30PM to pick him up, and after a stop at Snarf’s for delicious sandwiches we drove to Button Rock Preserve and arrived in the parking lot by 5:45PM. We quickly consumed our tasty meals and assembled our rods and hiked up the canyon for approximately a mile. I selected my Sage four weight for the evening and stuffed my regular glasses and headlamp in my backpack. By 6:30 we were positioned in the creek and ready to make our first casts. The flows of 107 CFS were, indeed, a bit high, but many possible holding spots behind structure provided hope to two eager evening fishermen. 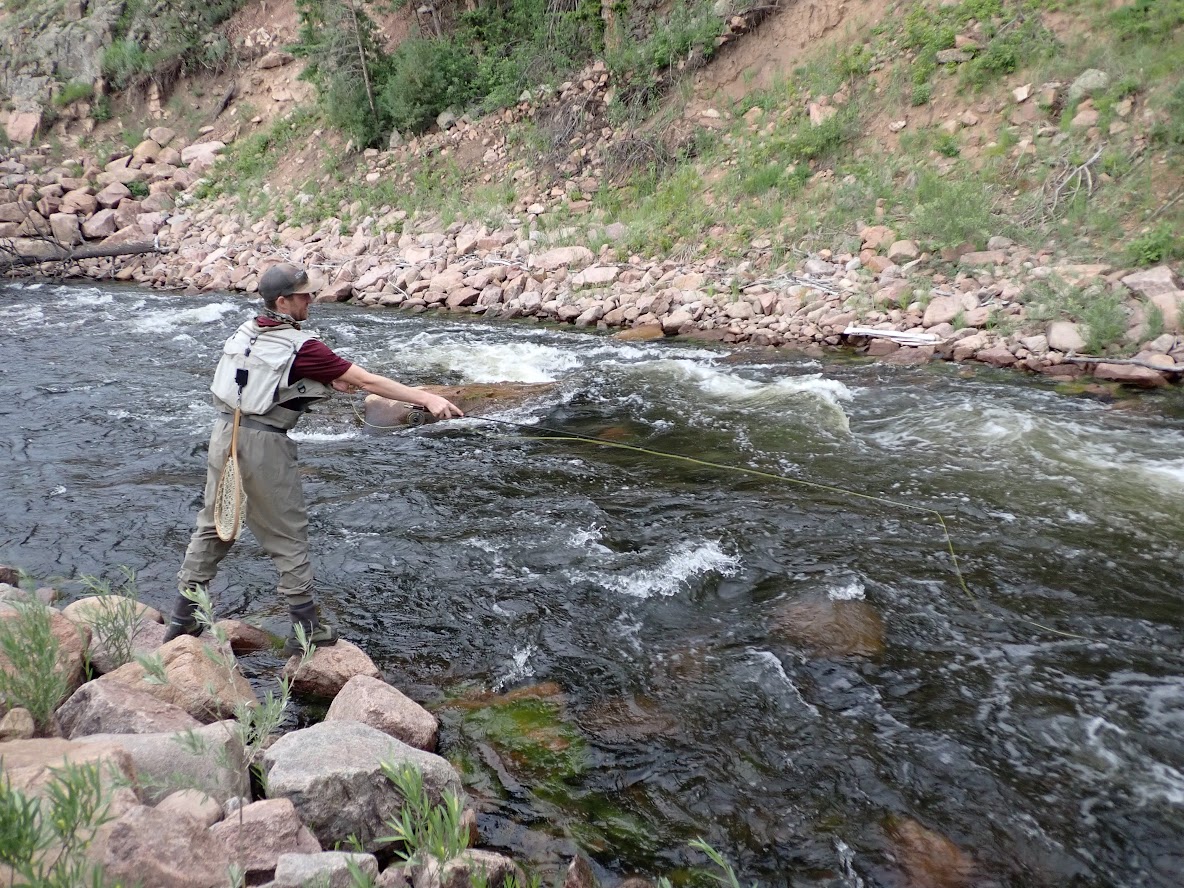 I began with a tan ice dub chubby Chernobyl trailing a beadhead hares ear and iron sally, and Dan and I were both frustrated by splashy refusals to the top fly in the early going. We both found it interesting that the trout were looking toward the surface despite higher than normal flows. After thirty minutes of fruitless casting I landed a six inch brown trout along the far bank on the chubby. In spite of some very focused fishing, that was the extent of our success on Wednesday evening. Dan endured a few more refusals. 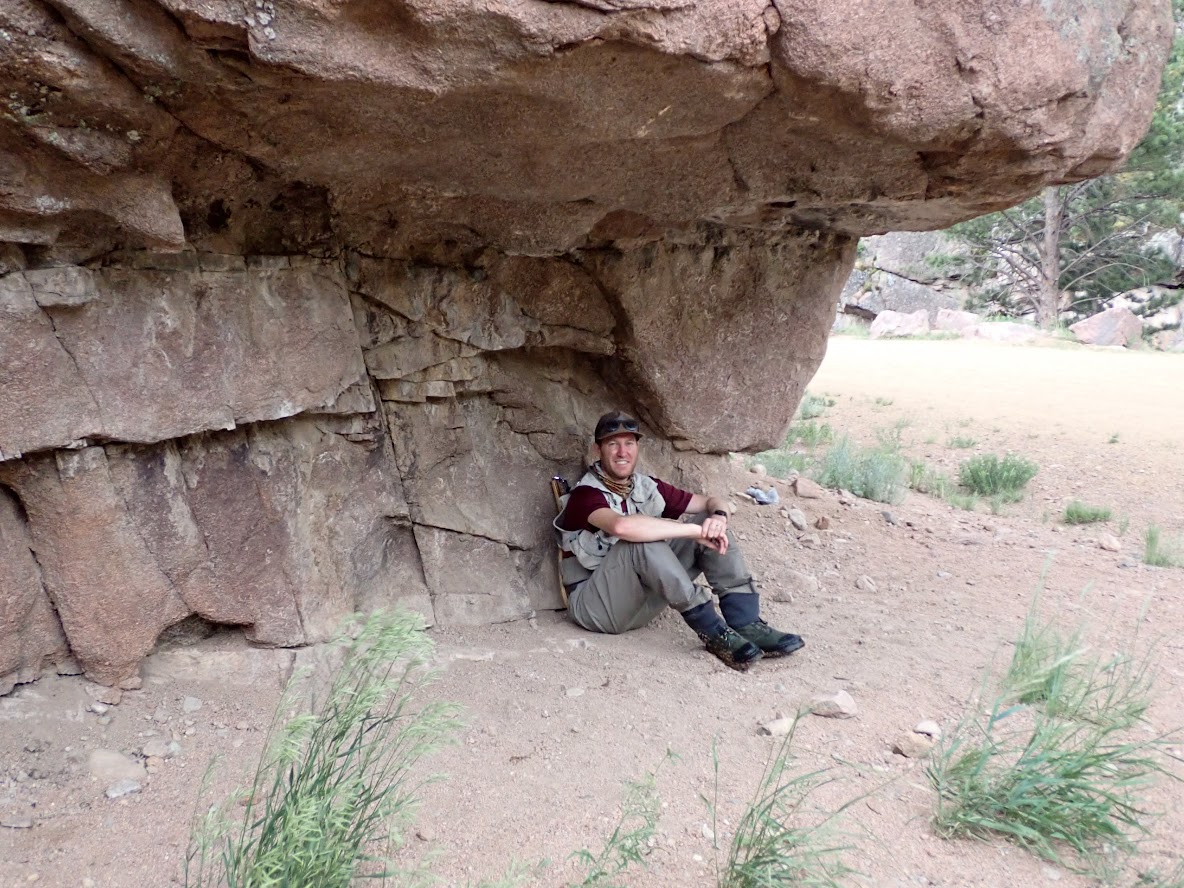 A Fortuitous Find Before the Storm

By 7:30PM some dark clouds arrived, and we found shelter beneath a wide rock overhang on the opposite side of the dirt road. Some lightning and thunder concerned us, but the net result of the disruptive weather was a five minute drizzle. Once the precipitation slowed we headed back toward the car, but along the way we paused to try some nice plunge pools above a concrete diversion. Alas, this also proved futile, and we reeled in our lines and quit by 8:30PM. 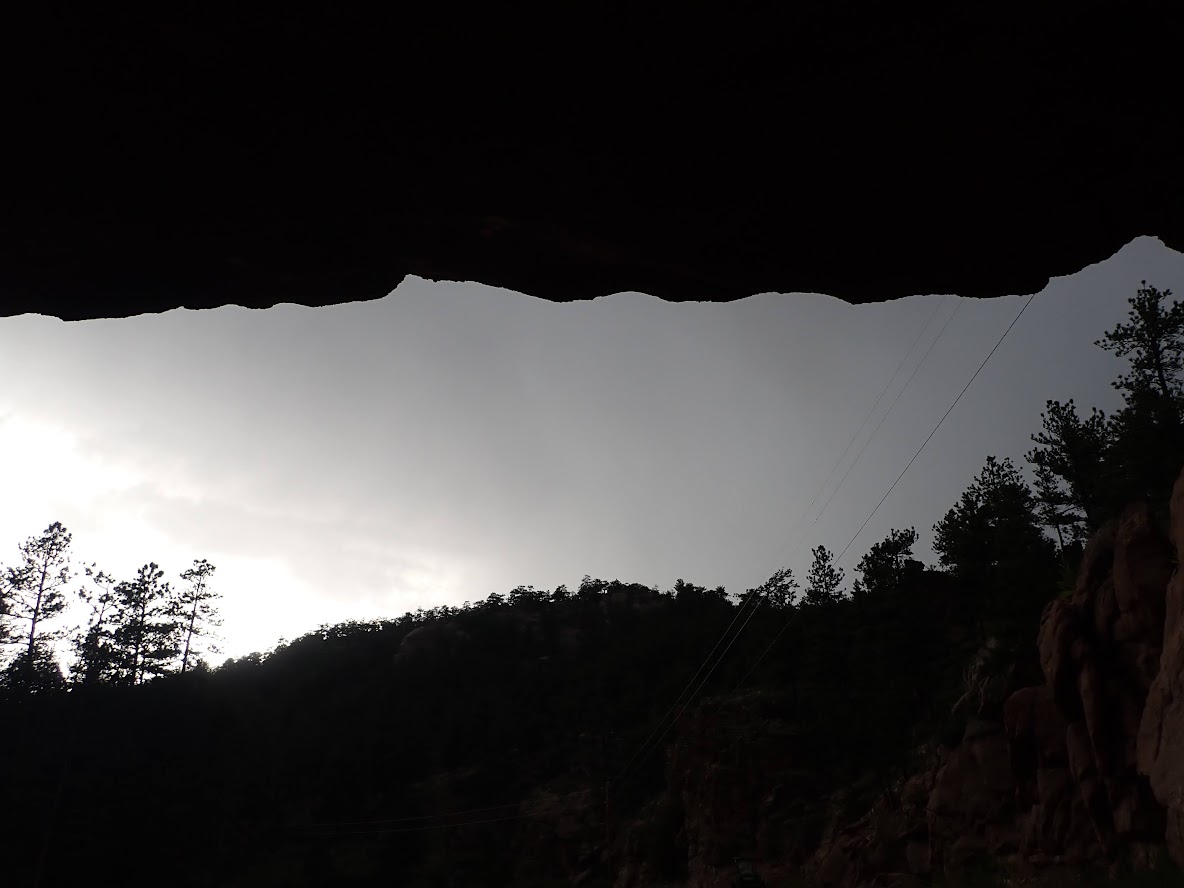 I must acknowledge that I was disappointed with our evening outing on the North Fork of St. Vrain Creek. My main goal was to see a few wild fish in Dan’s net, but we never solved the riddle of how to entice the creek inhabitants. I expected to see some caddis activity at dusk, but the stream was largely devoid of insect life. Perhaps the lower flows of the Cache la Poudre River in Fort Collins would have been a better choice. At any rate, I always enjoy the opportunity to spend time with my son given the demands of his job and his devotion to his wife and soon to arrive son. The highlight of the evening was sitting under the shelf rock and chatting, while we waited out the threatening storm.