With my scheduled surgery on my birthday postponed indefinitely, and the corona virus spreading at unprecedented rates, I decided to take advantage of a forecast mild late winter day, before a snowstorm moved into Colorado on Thursday. Because Jane, Amy and I traveled to Vail for a day of skiing on March 9, we were self quarantined, but a day of fly fishing seemed like a safe and enjoyable form of social distancing.

I narrowed my destination choices down to four, and the list included the Cache la Poudre in Ft. Collins, the North Fork of St. Vrain Creek in Buttonrock Preserve, the same North Fork in Lyons, and the South Platte River in Deckers. I consulted with my fly fishing buddy, Trevor (@rockymtnangler), and he promptly recommended Buttonrock Preserve. Trevor enjoyed an outstanding day there several weeks ago, and the flows were around 20 CFS with a high temperature in Lyons projected to be in the low sixties. These factors convinced me to make the one hour and fifteen minute drive to the small front range stream near Lyons. 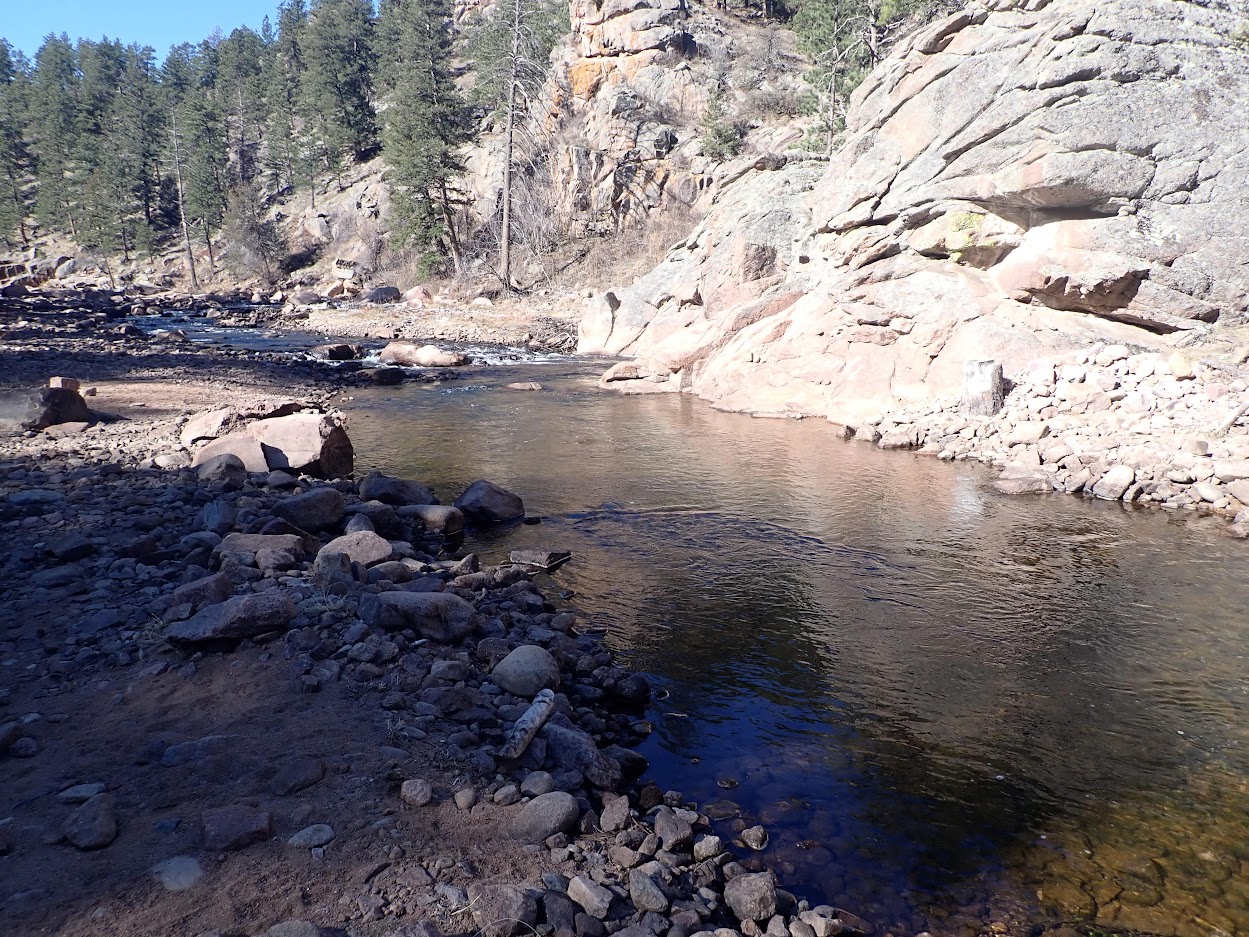 I arrived at the parking area by 9:30AM, and I was surprised by the number of cars in the lot. Obviously quite a few self quarantined workers were unable to work, and thus, taking advantage of unexpected free time to hike the access road. I quickly assembled my Orvis Access four weight and threw on my light down coat and strode at a medium pace through the gate and followed the dirt road to a point just beyond Longmont Reservoir. Trevor mentioned that he had success along the entire length of the creek, so I decided to sample the lower creek, that I normally skip past. 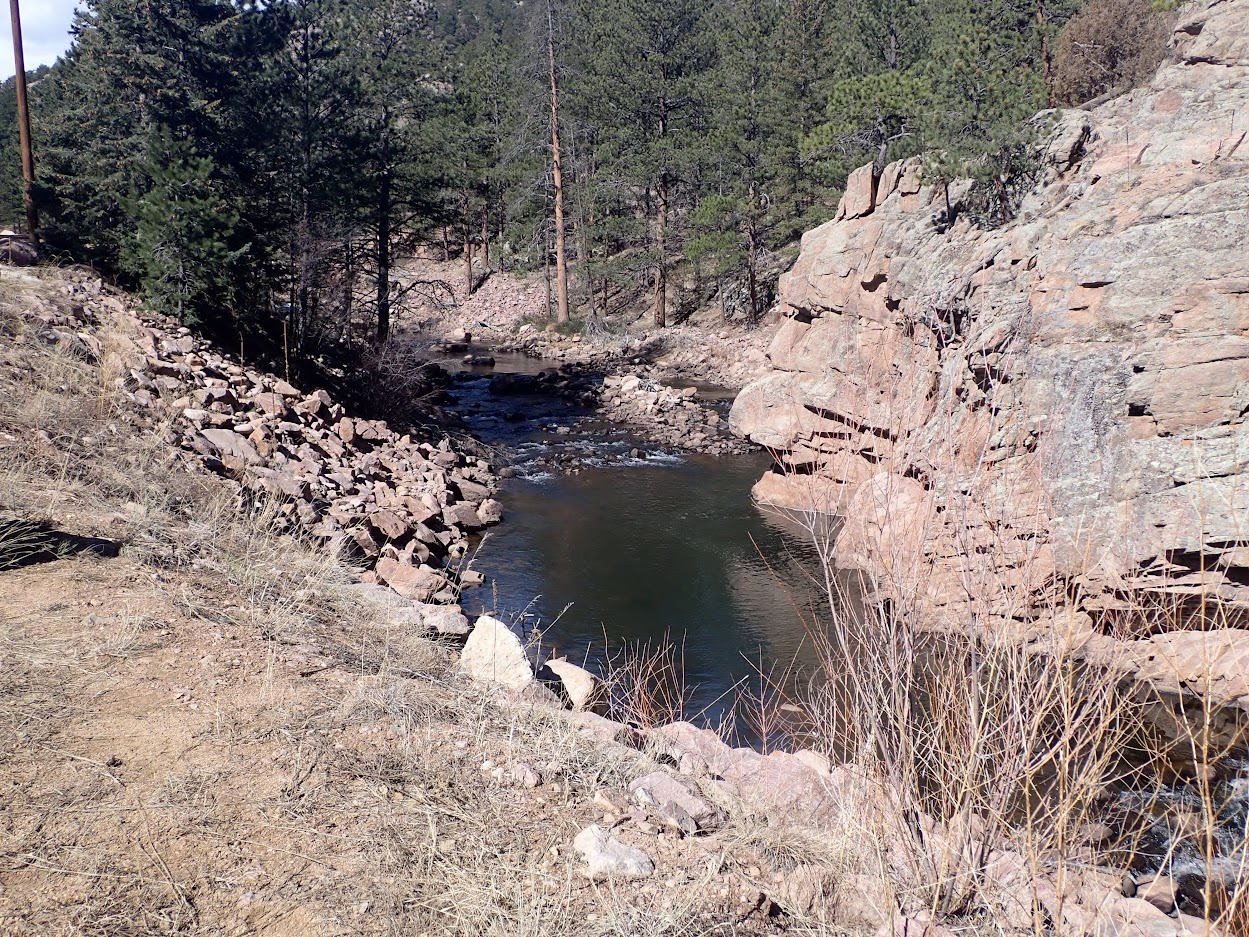 I Skipped This Pool

I configured my line with a yellow fat Albert, a 20 incher, and a fly that resembled a Frenchie without the jig hook. I spent the next two hours working my way upstream with the dry/dropper rig but failed to interest a single trout in my offerings. Needless to say I was frustrated. During this unproductive quest for trout I cycled through a salad spinner, Frenchie, ultra zug bug, chartreuse copper john, and hares ear nymph in addition to the first pair of flies enumerated above. Nothing worked, and I was perplexed regarding my inability to attract interest from the small mountain tailwater trout.

I arrived at a nice pool across from the incomplete Chimney Rock Dam by noon, and I paused to down my lunch and collect my thoughts. The sun was out, and it climbed high enough above the vertical rock wall opposite my position to bathe ninety percent of the stream in sunshine. As I observed while munching my carrots, I spotted a shadow, as it hovered above a large light colored flat rock. Sure enough the dark form moved from side to side, as it appeared to snatch small food items from the drift. Clearly the trout were feeding on something, but what was it? 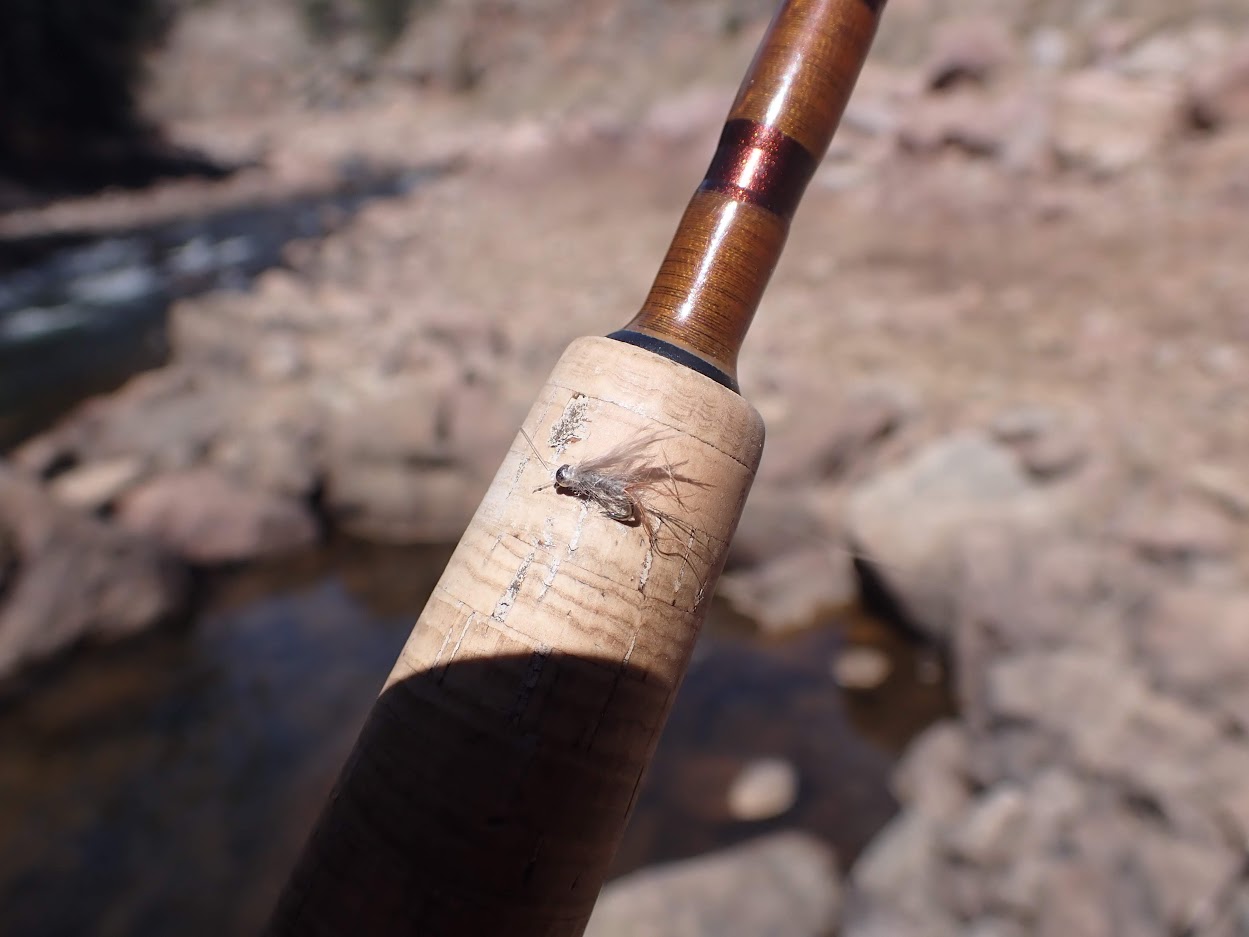 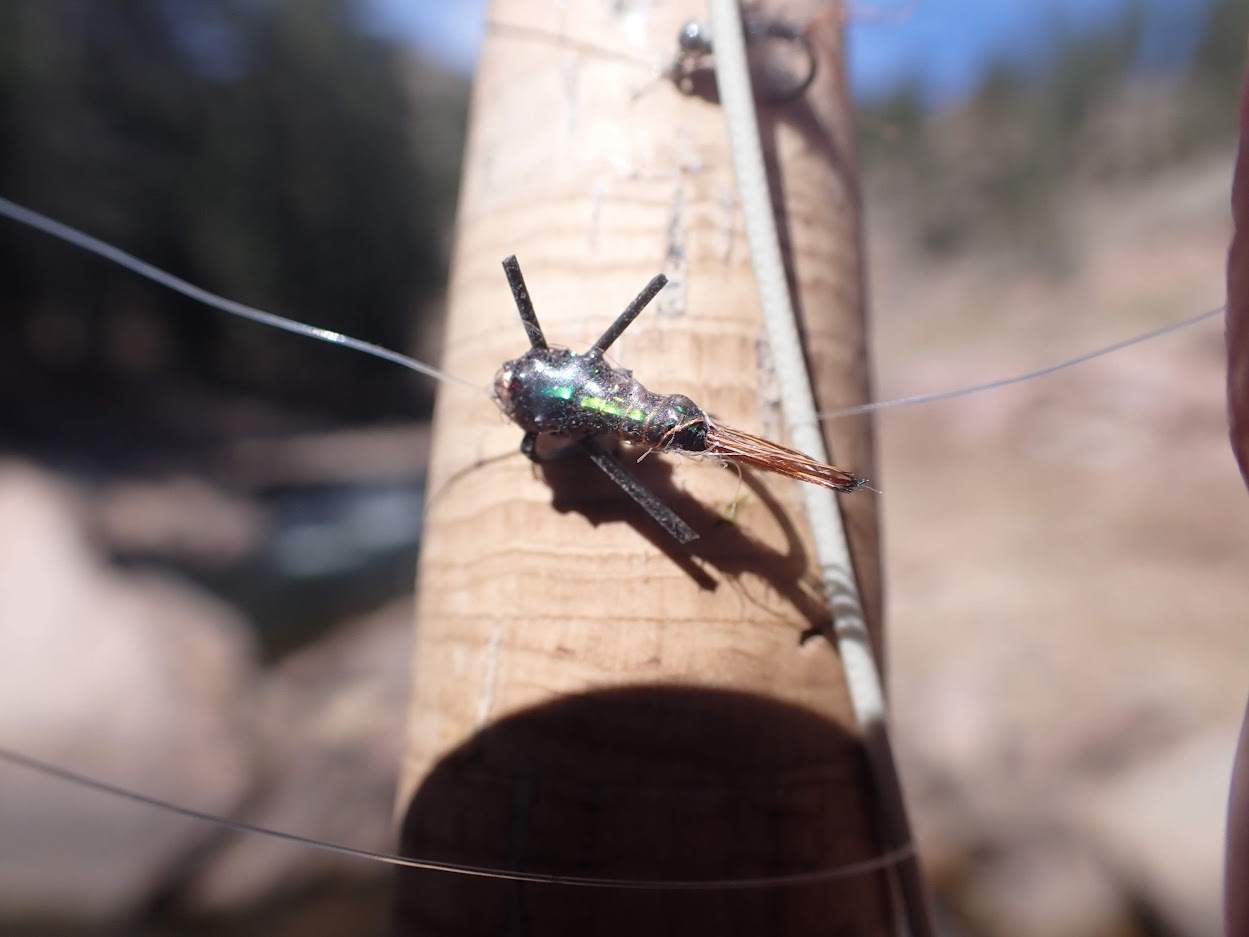 By 12:30 I stood next to the stream near my lunchtime dining spot, and I was refreshed and anxious to continue my pursuit of cold water fish. I retained the yellow fat Albert, but beneath it I knotted a salvation nymph and a classic RS2. I began lobbing casts upstream of the previous location of the trout shadow, that I observed during lunch, and I allowed the fat Albert and trailing flies to swing past the flat rock. I am not sure whether it was the same fish, but on the fourth drift a ten inch rainbow trout snatched the RS2, just as it began to swing, and the fish counter registered one. After two and a half hours of fruitless casting, I was finally on the scoreboard. 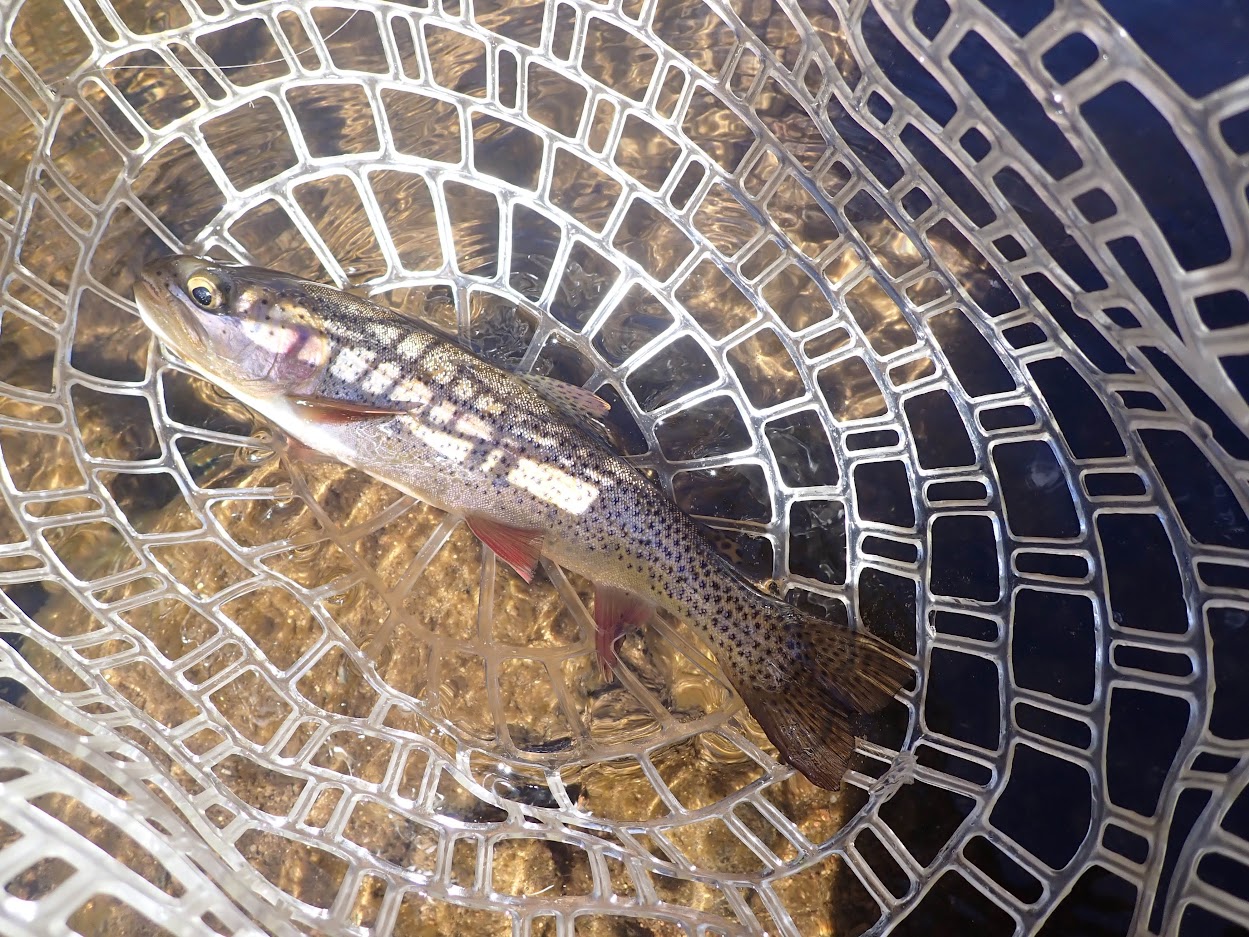 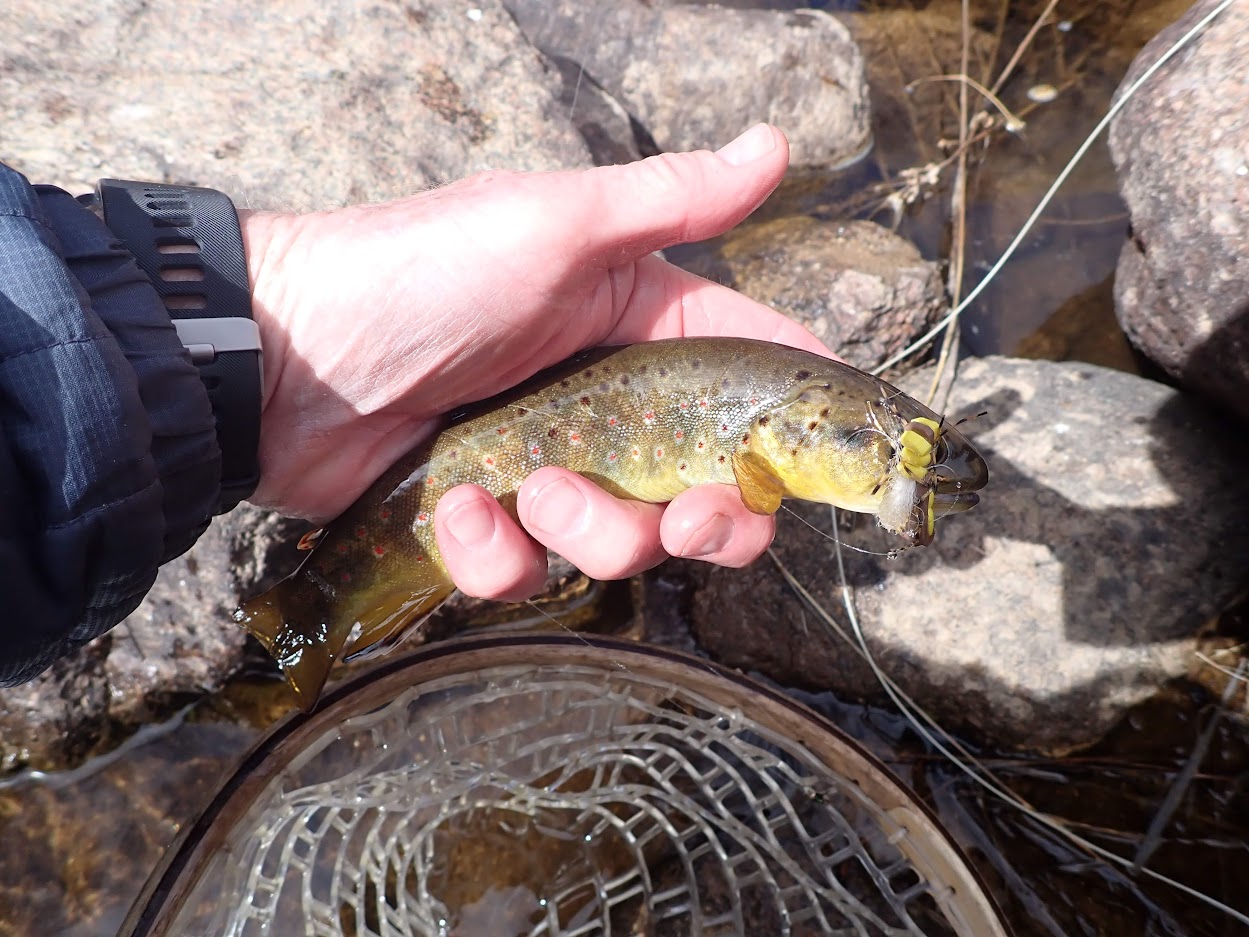 For the next three hours I prospected the dry/dropper rig upstream, and the fish count increased from one to nine. The highlight of this period was an eight inch brown trout that crushed the size eight fat Albert. Two of the first nine landed fish grabbed the salvation nymph, but the main producer was a sparkle wing RS2 that replaced the classic RS2 after a thirty minute trial. I made the change hoping that the sparkle wing would serve as a more visible attractor, and the tactic seemed to pay off. Of course four or five temporary connections were part of the scene, but in many cases the drop offs were very small trout that may have measured beneath my six inch standard. 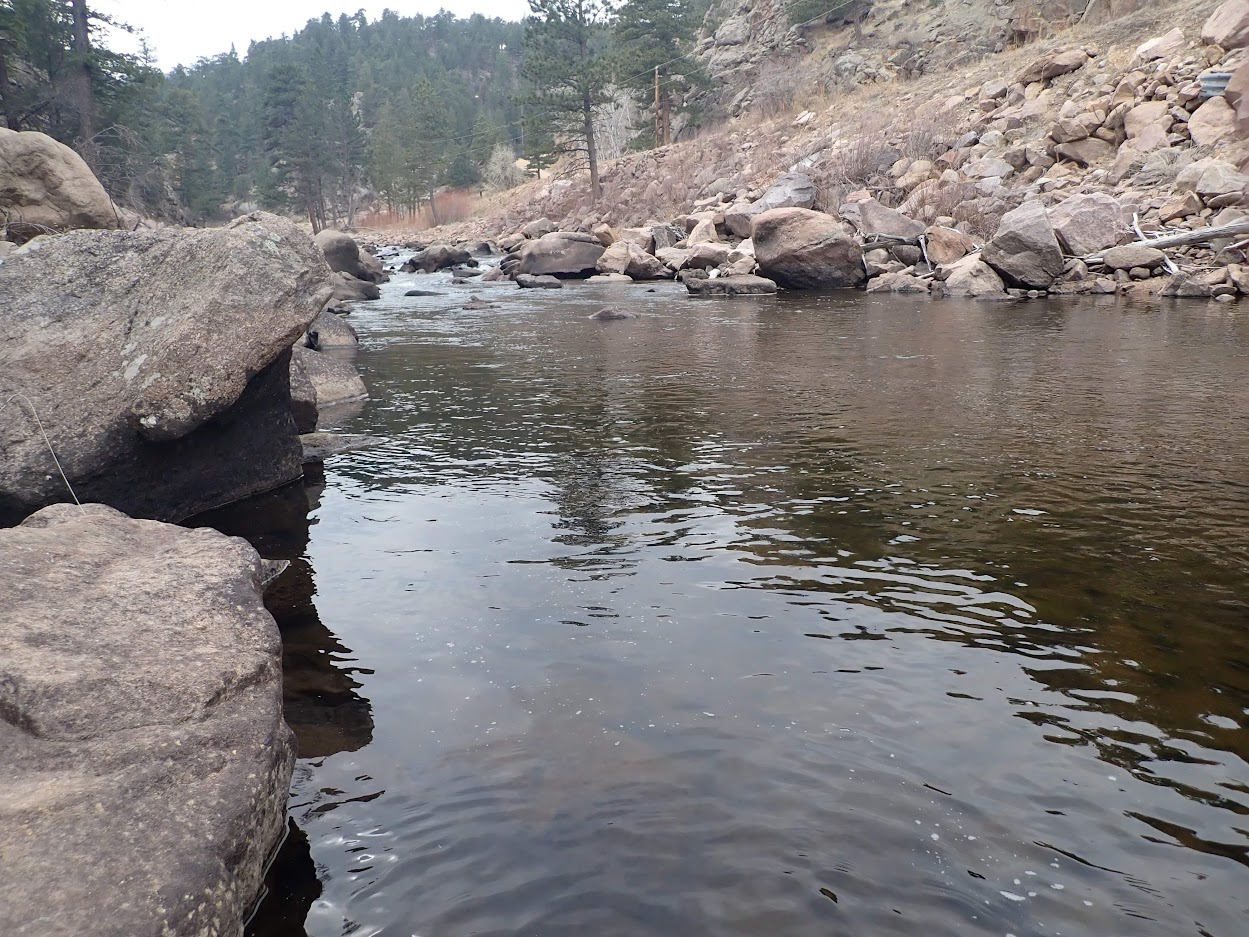 Risers in This Long Pool

At 3:30PM I approached a long smooth pool, and sporadic rises caught my attention. I astutely avoided splashing the large fat Albert in midst of the feeding trout and removed the three fly set up and shifted to a single fly approach. For my single fly I chose a size 22 Klinkhammer BWO. I did not observe any naturals, but the sky was clouding up, and it was the baetis time of the year, so I played the hunch. In an earlier slow moving pool, I switched to a CDC BWO, but that choice prompted only a couple refusals, before it was ignored entirely. Shortly after the earlier switch to a dry, I spotted a pair of small gray stoneflies, and I regretted not testing one of my size 18 early stonefly imitations. 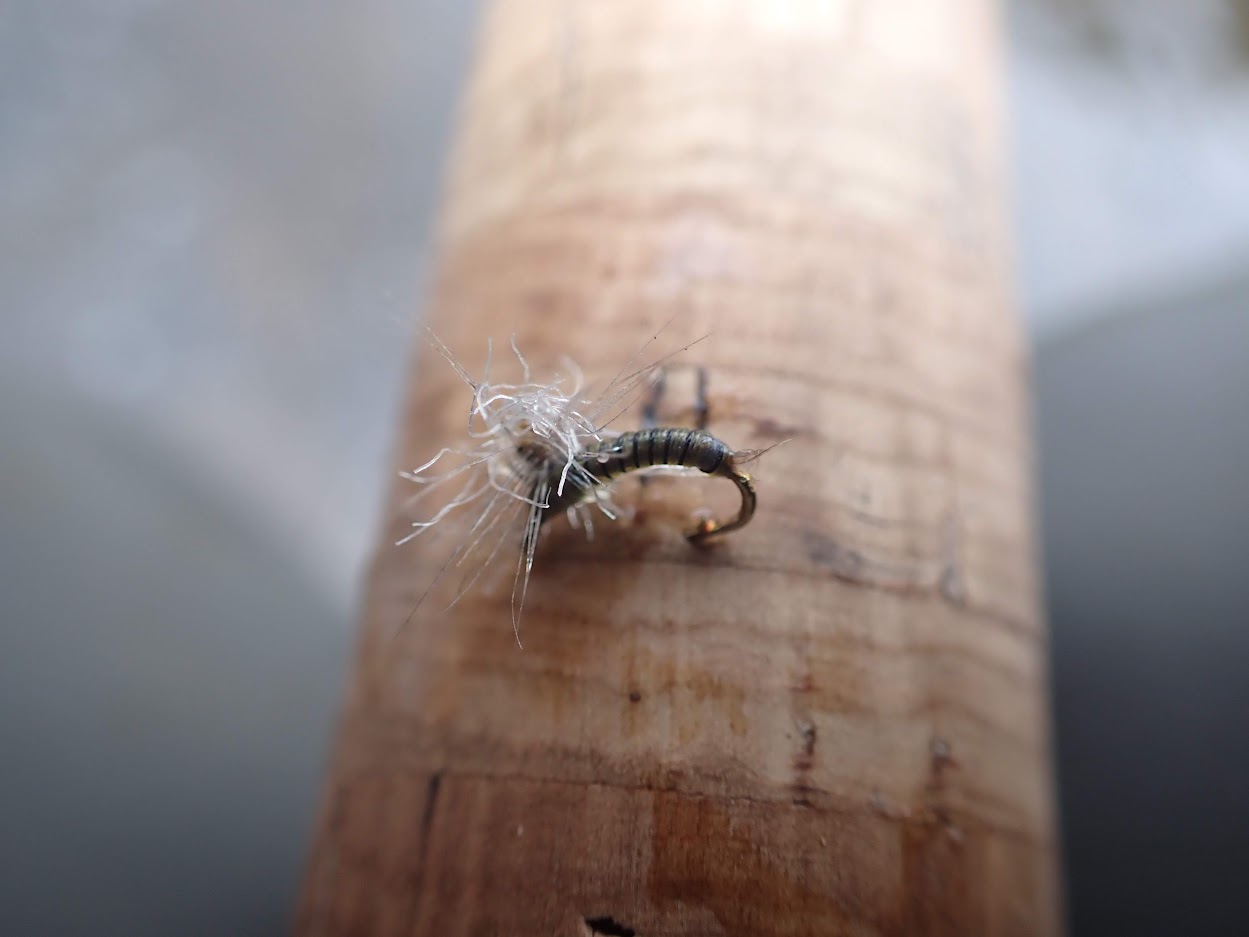 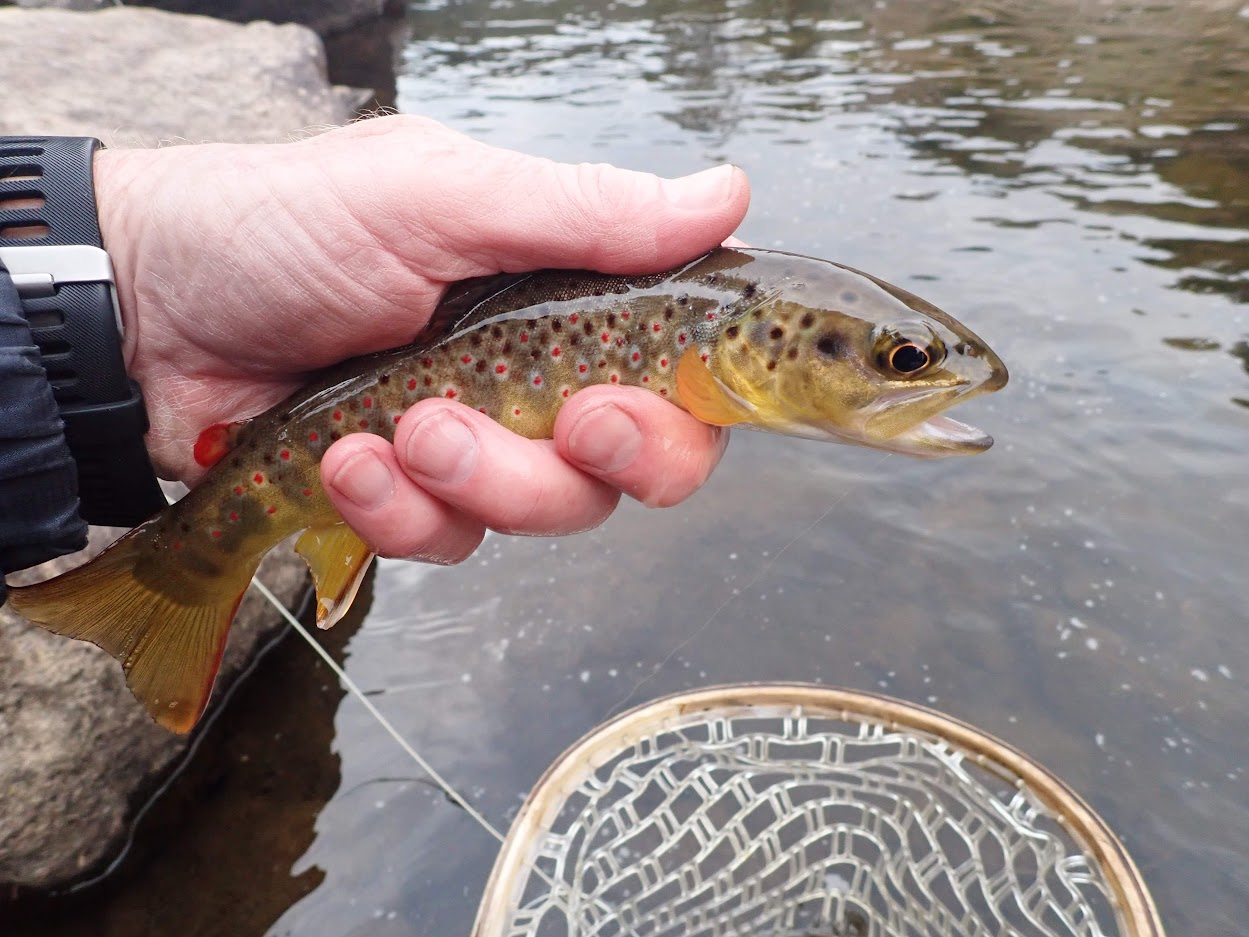 My late afternoon Klinkhammer selection proved to be a winner, and I landed two nine inch brown trout that could not resist the low riding emerger imitation. In addition to the landed fish, I connected ever so briefly with several additional opportunistic feeders. Landing two trout on the Klinkhammer dry in the last thirty minutes was icing on the cake for my first double digit day of 2020. Of course the trout were small, but in spite of this minor drawback, I was challenged to find a combination of flies that would dupe wild fish, and I managed to partially solve the riddle. Three fish were in the nine to ten inch range, and the remainder were between six and eight inches. Wednesday was an example of social distancing at its finest, as I never came within six feet of the other outdoor enthusiasts that paraded along the road high above me. Hopefully the March 19 storm will fade quickly, and I will experience additional corona virus induced outdoor adventures.