I landed some quality fish on Monday from the Arkansas River; however, I was dissatisfied with the fish count, so I decided to visit another never before fished stretch of river. I chose the MIddle Fork of the South Platte River at the Tomahawk State Wildlife Area. I read positive reviews on this section, and the salesperson at ArkAnglers raved about it, when I stopped to look for a new New Zealand indicator tool after fishing on Monday. I consider myself an above average fly fisherman, but my day at Tomahawk humbled me. The conditions could not have been more challenging, so I should probably reserve judgment, until I try it again under more favorable circumstances.

The drive from the Woodlands Motel in Salida to the Tomahawk area north of Hartsel was approximately an hour. The man at the fly shop told me that there were two entrances, and I decided to seek the second one, as I headed north on CO 9, but I somehow missed the sign and traveled five miles beyond it. I finally realized that I was moving farther away from the stream and executed a turnaround. As I headed in a southeastern direction, I finally saw the sign. It was paralleling the highway and tilted toward southbound traffic, so I felt vindicated in missing it. I followed a reasonably smooth dirt road, until I arrived at the largest parking lot, and I grabbed a space facing south. I was the only car in the lot, although several were visible in other smaller pullouts on the opposite side of the river.

I quickly assembled my Sage four weight and pulled on my waders and began hiking along a well worn path that paralleled the right or northeastern side of the river. The water was extremely low, and the air temperature was already in the sixties. A cool breeze blew intermittently, so I wore my raincoat as a windbreaker; however, by lunch time I rolled it into a tight cylinder and stuffed it in my backpack. Low, clear water, a bright blue sky with no cloud cover, and wind foreshadowed a tough day. 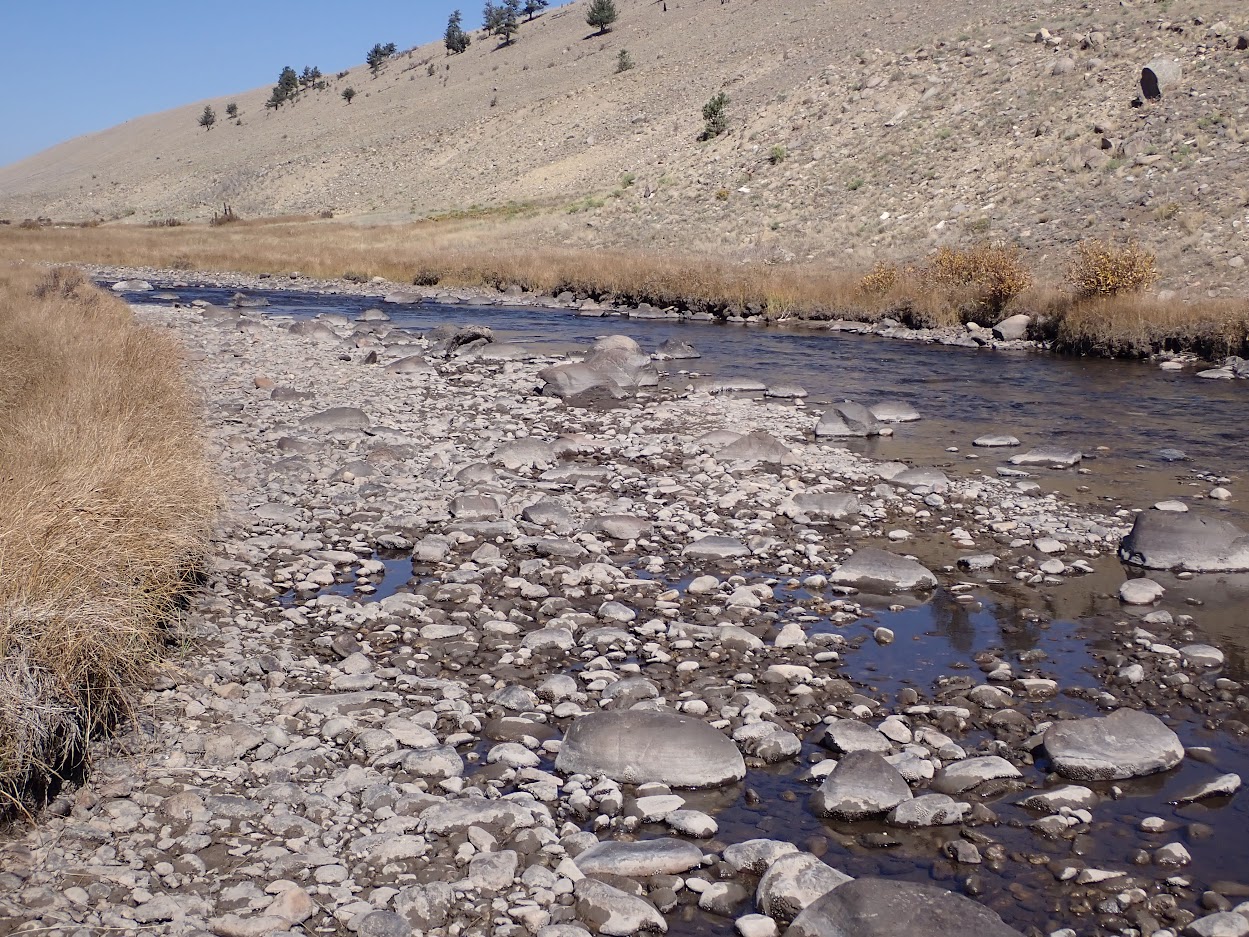 I decided to hike ten minutes from the parking lot to escape the typically highly pressured nearby sections. After the requisite distancing I cut to the river (really more like a creek) and commenced my day. I began with a hippie stomper, iron sally and pheasant tail nymph; and in the early going I scattered quite a few fish. The shadow from my overhead line seemed to spook the fish, and very few deep holes that offered reasonable cover were evident. After half an hour of futility, I arrived at a nice V-shaped deep trough next to a high bank on the left. A strong current ran five feet way from the bank, and I was drawn to the space between the current seam and the bank. I began casting the dry/dropper to the top of the deep area, and on the fifth drift a substantial fish elevated to inspect the hippie stomper. On a subsequent cast the same look with a closed jaw occurred.

Since my blind prospecting was proving futile, I decided to focus on this now visible fish, and I began a sequence of fly changes. I cycled through a Jake’s gulp beetle, a stimulator, a caddis, an ant, and a pool toy hopper; but none of these imitation morsels caused the targeted fish to even take a look. I decided to move on, but this was probably the closest I came on Tuesday to hooking and landing a fish over the six inch minimum. 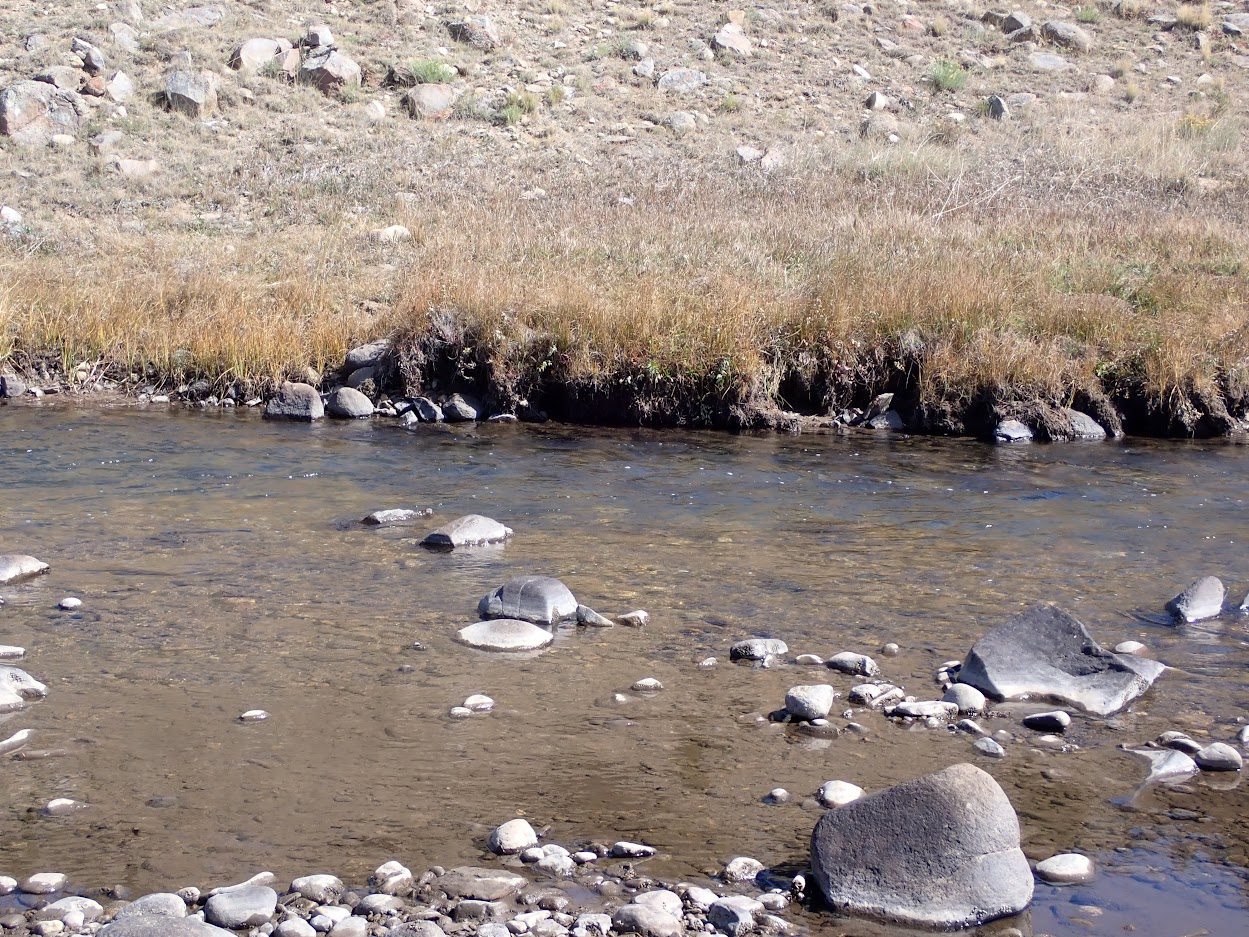 I paused to eat my lunch at noon, and then I continued my upstream migration. In total I covered at least a mile, and the number of attractive fish holding locales was limited. At 1:00PM I approached a spot, where some murky water re-entered the river from a small irrigation channel. At the time I was fishing an olive stimulator with a sunken epoxy ant, and two brown trout refused the stimulator. Once again the rare sighting of two fish motivated me to try some alternative dry flies; and I drifted an Adams, deer hair caddis, parachute ant, CDC BWO, and gray comparadun along the edge of the discolored seam; and only the deer hair caddis generated additional looks.

After twenty minutes I surrendered to the picky eaters and continued my upstream progression, but I never saw or even spooked another fish. The sun was bright and the air temperature soared into the upper seventies, and the high plain provided no shade to blunt the intensity of the sun’s rays. I decided to cut my losses and hiked back to the car for an early departure. I probably spent more time walking and changing flies than fishing. Over the course of my 3.5 hours I tested a hippie stomper, stimulator, parachute ant, olive-brown deer hair caddis, gray deer hair caddis, gray comparadun, Jake’s gulp beetle, pool toy hopper, parachute hopper, iron sally, pheasant tail nymph, salvation nymph, sunken ant and RS2. Only the hippie stomper and olive-brown deer hair caddis drew interest.

Tuesday was a humbling experience at the Tomahawk State Wildlife Area. If I return, I will choose a time when flows are considerably higher. Zero fish landed in 3.5 hours of fishing made me appreciate even more the many productive days that I experienced this summer.