Our pickle ball friend, Anne, contacted us and invited us to join her on a camping trip to Camp Dick. Jane and I hiked from the Camp Dick location once before in 2018, but we never considered camping there, because we assumed it was a very popular spot within 1.5 hours of Denver, CO. Anne, being the inveterate planner, reserved a campsite six months ago, and she was looking for someone to share in the good fortune. Needless to say, we jumped at the opportunity and joined her from Monday, August 24, through Wednesday, August 26. 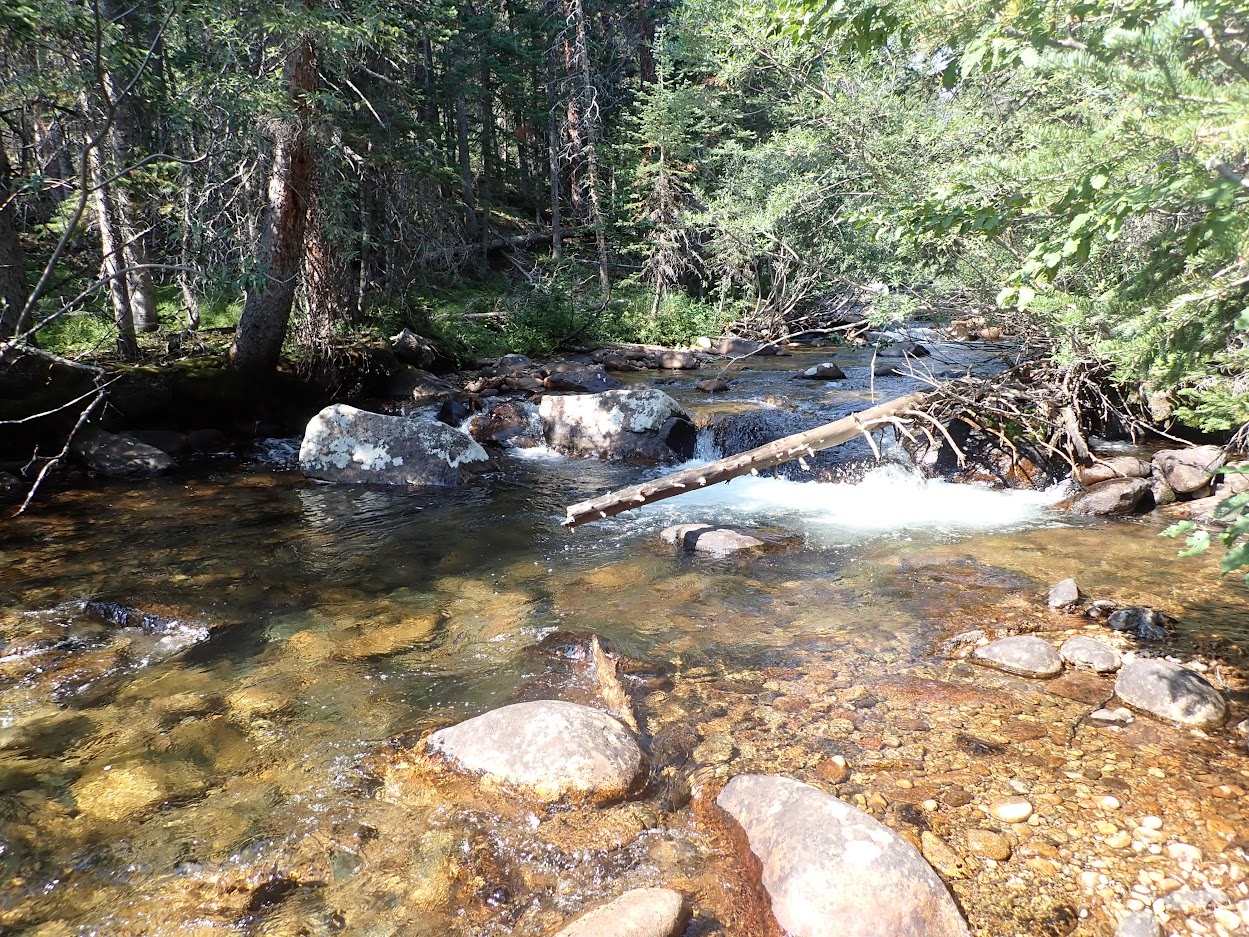 After our initial hike in 2018 I made a subsequent trip on July 24, 2018 for a day of fly fishing. I experienced a so-so day of catching tiny brook trout, and I deemed the effort required as a result of high flows and difficult terrain not worth the reward of small brookies. This new camping opportunity provided another chance to explore the small high elevation stream in order to assess whether my initial impressions were accurate. 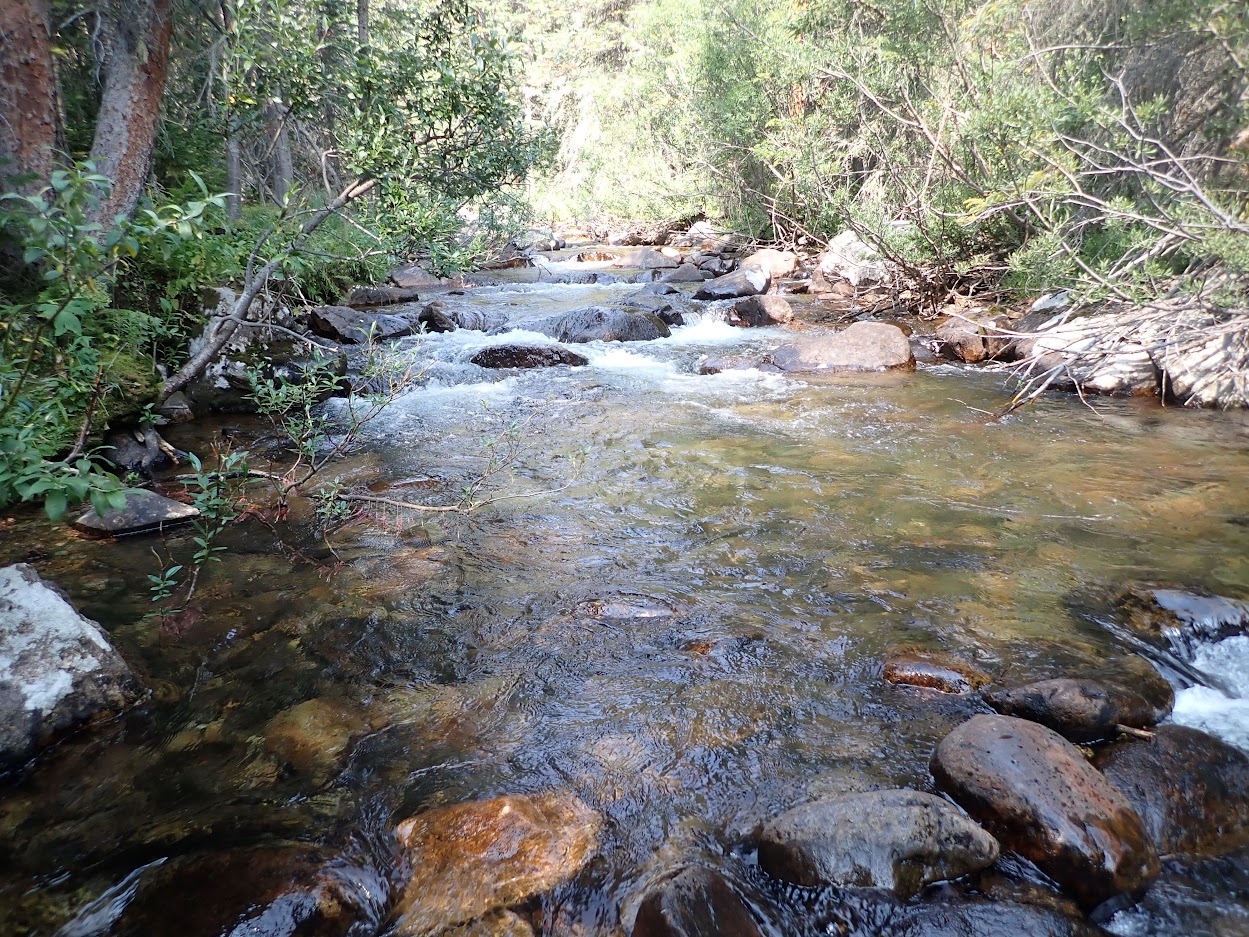 On Tuesday morning I dressed in my wet wading uniform and assembled my Orvis Accsess four weight. Anne and Jane decided to hike west on the Buchanan Pass Trail as well, so I waited, and we departed together by 9:30AM from the Camp Dick Campground. After 2.3 miles the trail began to ascend at a rapid rate, and this circumstance meant that I was getting higher and more distant from the creek, so I split from my hiking friends and reversed direction for .2 mile to a point, where I could maneuver through the forest to the edge of the creek. The temperature was in the mid-seventies, as I began, and the day developed into another hot one even at 9,000 feet, and I was comfortable wet wading during my entire time on the stream. The creek was clear and near ideal levels in my opinion, and this eased my efforts to wade and improved the quality of the fishing compared to my trip on July 24, 2018. 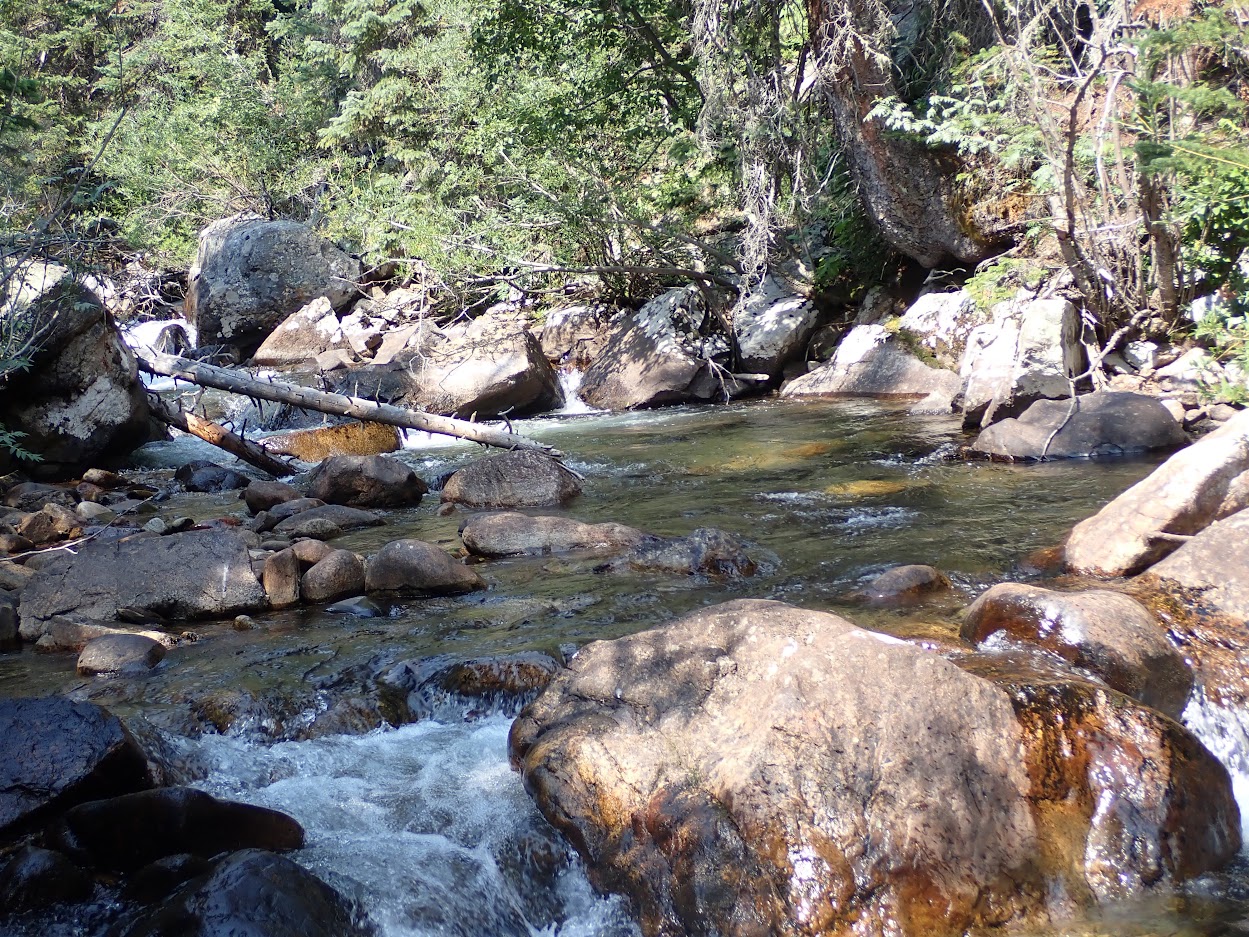 I opted for the double dry approach to launch by quest for backcountry trout. The previous night at the campground I observed size 12-14 caddis with an auburn body color, and the closest I had in my fly box were size 14 light olive-brown stimulators. One of these occupied the forward position on my line, and behind it I featured a gray bodied size 16 caddis. The combination  caught the attention of brook trout in the first thirty minutes, although refusals were part of the game, and several sure-fired spots failed to produce. Three brook trout slurped the stimulator, and one gulped the caddis. 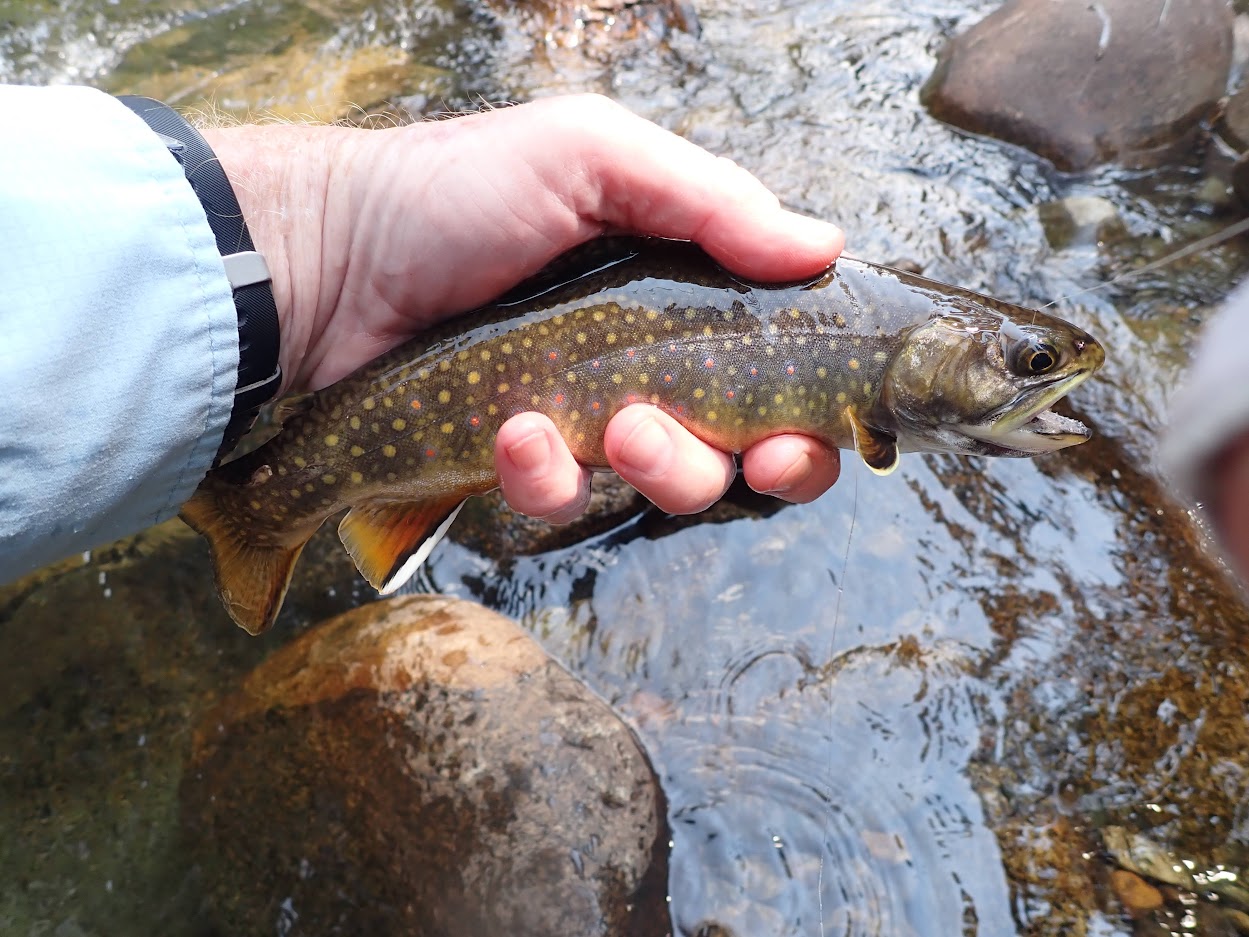 The stimulator was difficult to follow in the alternating sunlight and shadows of the dense forest canopy, so I decided to make a radical change and adopted a peacock hippie stomper as my sole offering for probing the small creek. I reasoned that it was worth a try to provide greatly improved visibility, and if it failed, I could always revert to the stimulator. No worries! Two successive brook trout crushed the stomper in a gorgeous deep pool to raise my fish count to six, and I never looked back. The peacock stomper dominated my line for the remaining time on the water. 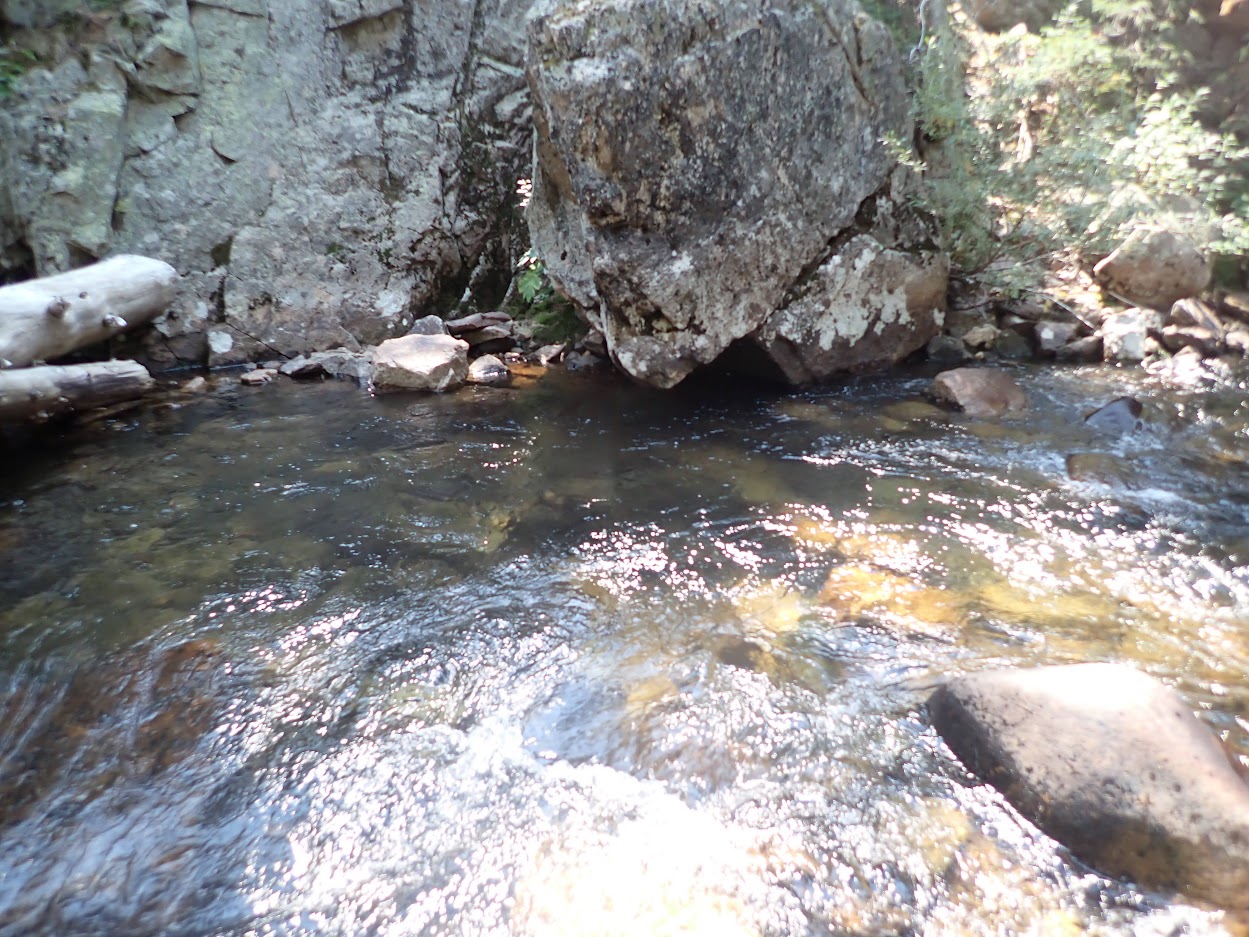 The late morning period featured several spectacular deep pools among sheer vertical rock walls, until I encountered a location, where I concluded that it was too difficult and dangerous to circumnavigate the canyon. I landed four aggressive feeders from a splendid pool that spanned the creek, and then I sat on some flat rocks and munched my small lunch, while I contemplated a strategy to extricate myself from a dead end position. 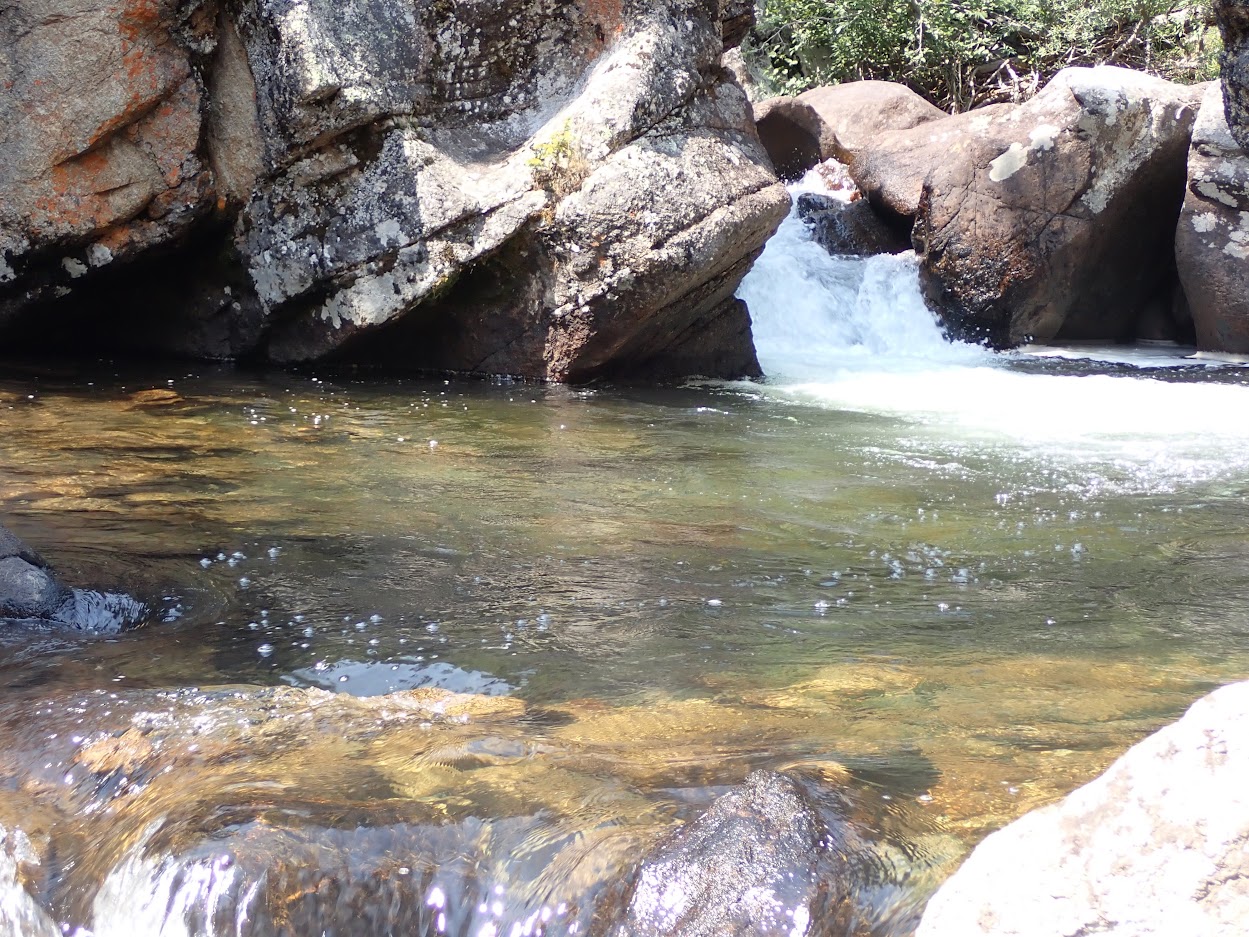 Closer View of the Trout Condo

After lunch I crossed the creek and climbed around a massive rock only to discover that the narrow canyon continued unabated in insurmountable vertical terrain. I retreated downstream, until I found a manageable exit point and then bashed my way through thick forest brush to the trail. Even this effort was no walk in the park, as I climbed  and stumbled over an abundant quantity of dead and fallen trees. I hiked along the trail in a westward direction for another .3 mile, until I recognized that I was above the impassable canyon stretch, and then I cut perpendicular through the woods to the creek. 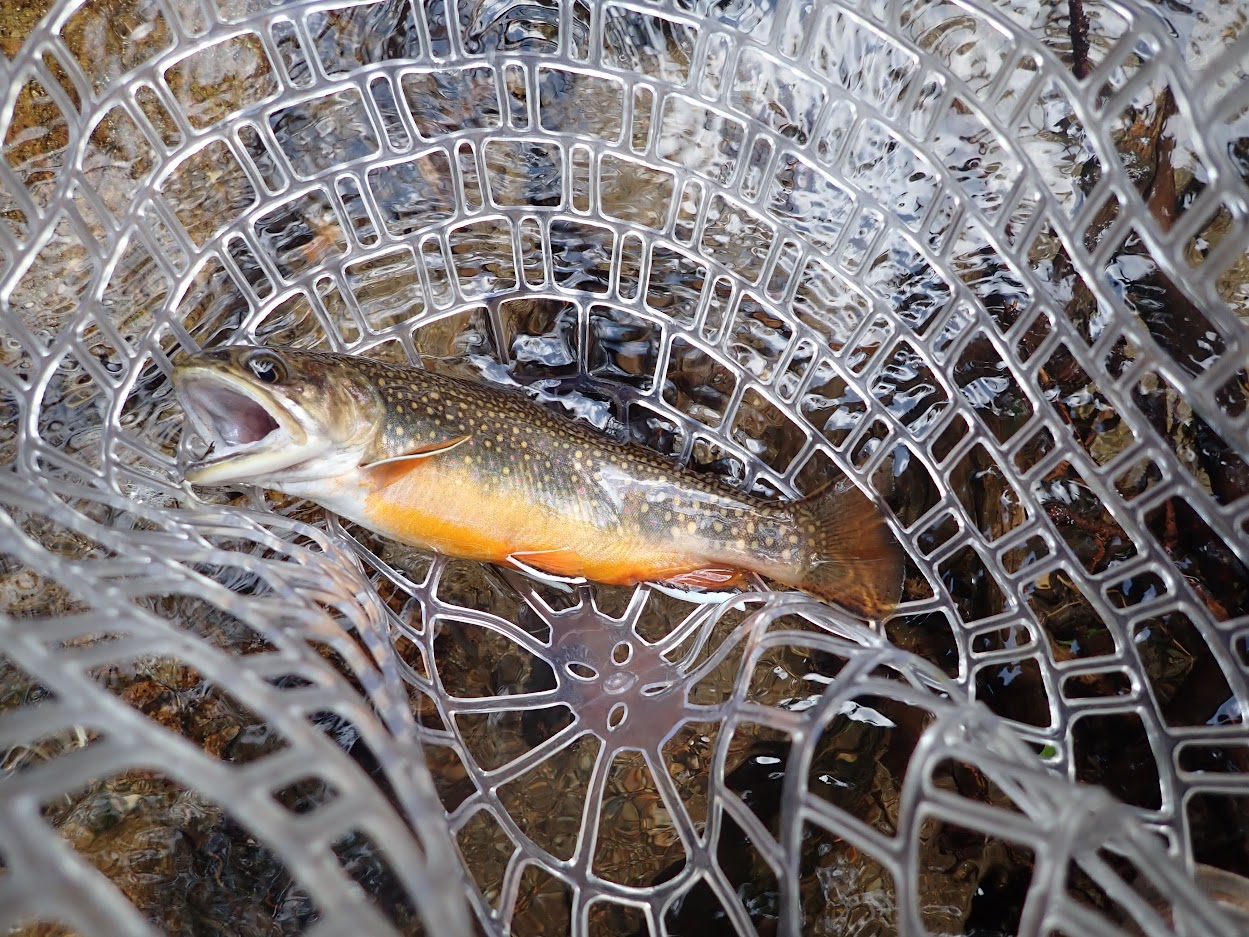 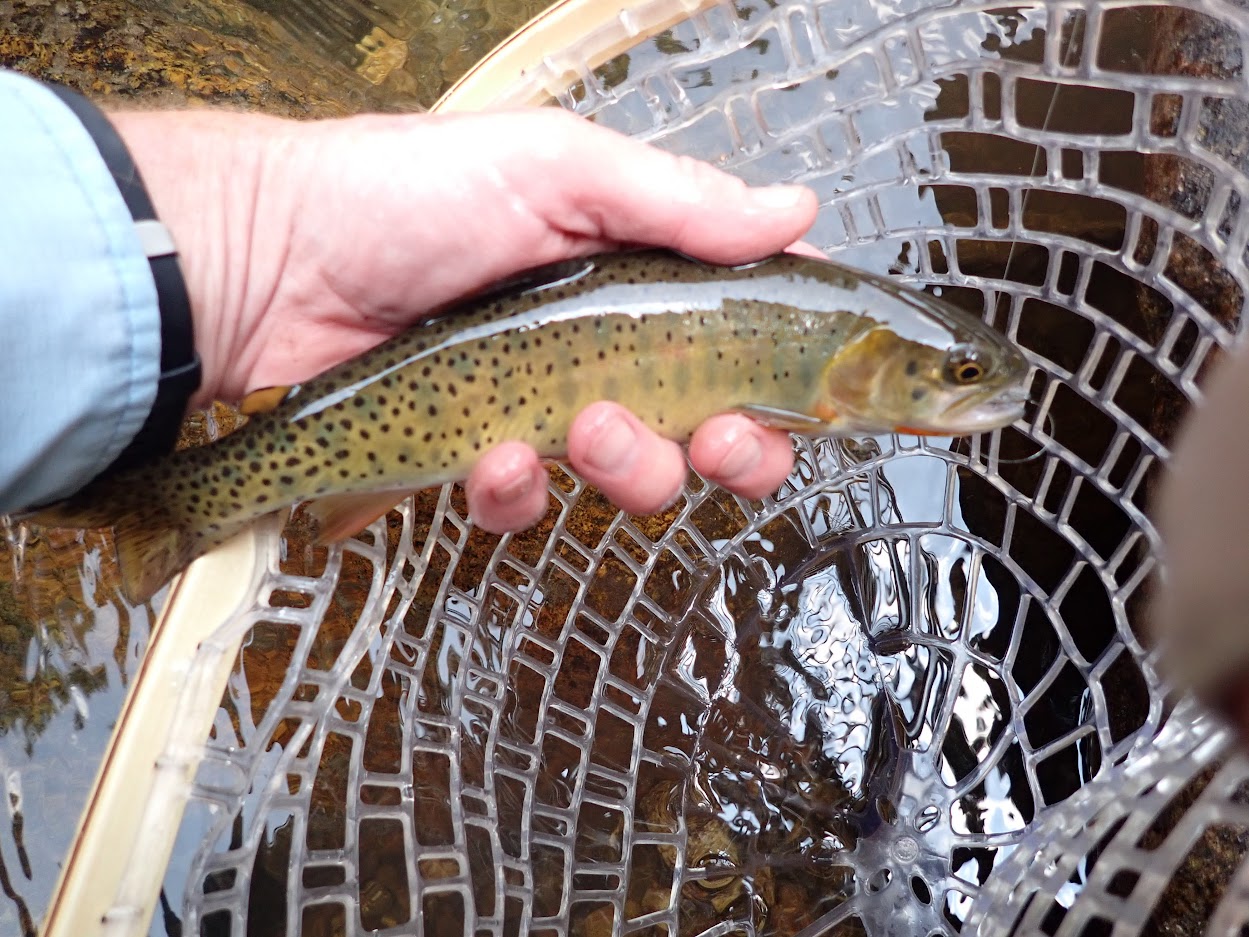 The stream during the afternoon was much more conducive to wading, and I progressed upstream and continued prospecting with the hippie stomper. The action was steady, and I incremented the fish count from ten to twenty-three. The lower gradient translated to fewer plunge pools, so I probed less obvious holding lies, but the fish were still present. 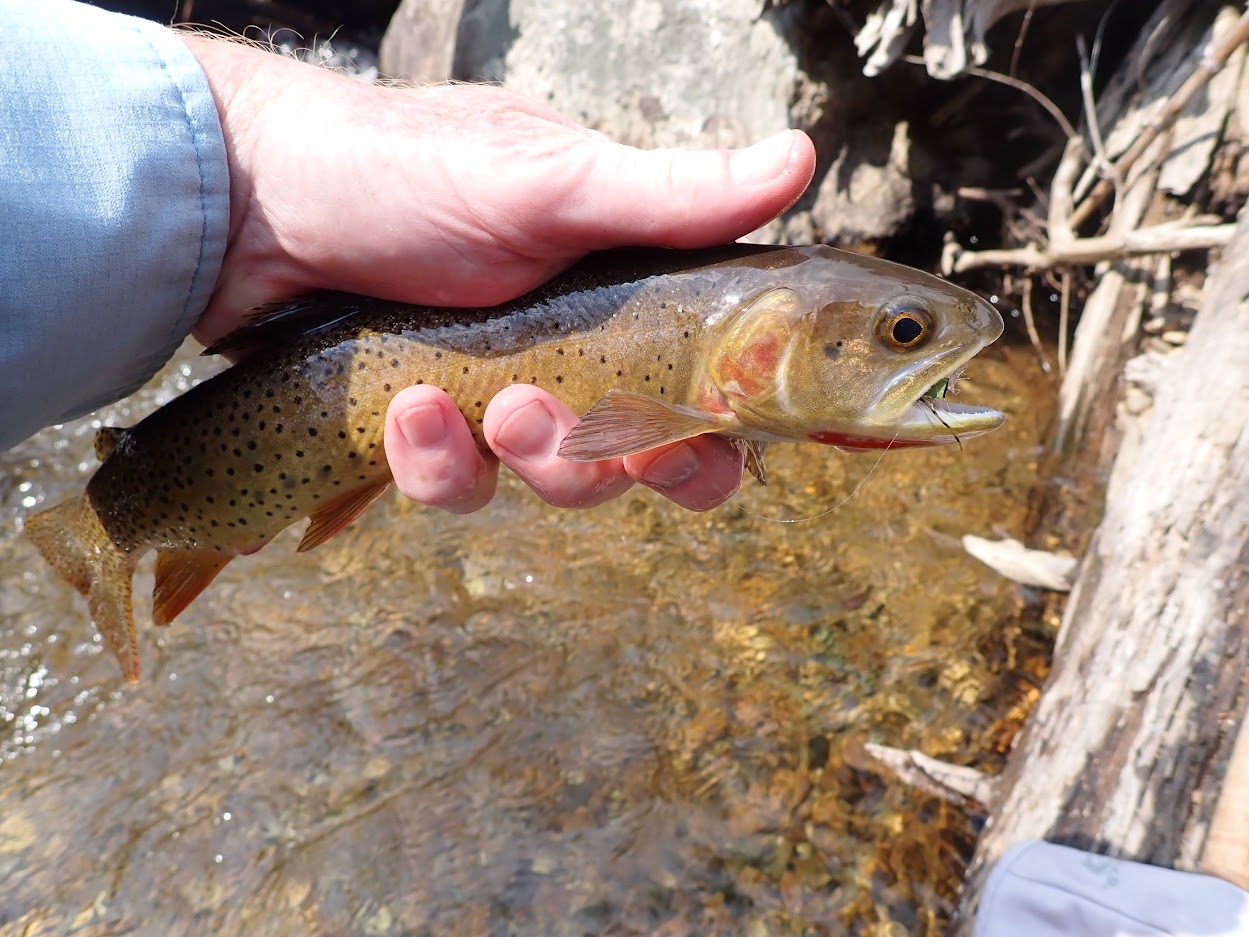 The highlight of the early afternoon were three stunning cutthroat trout that graced my net. One was the largest of the day, although quite skinny. Catching some natives among the prolific population of imported brookies was very satisfying. Many of the trout ambushed the hippie stomper at the tail of pools, just as the fly began to escape at the lip. I suspect the accelerated speed of the fly prompted the trout to respond before losing a big meal. 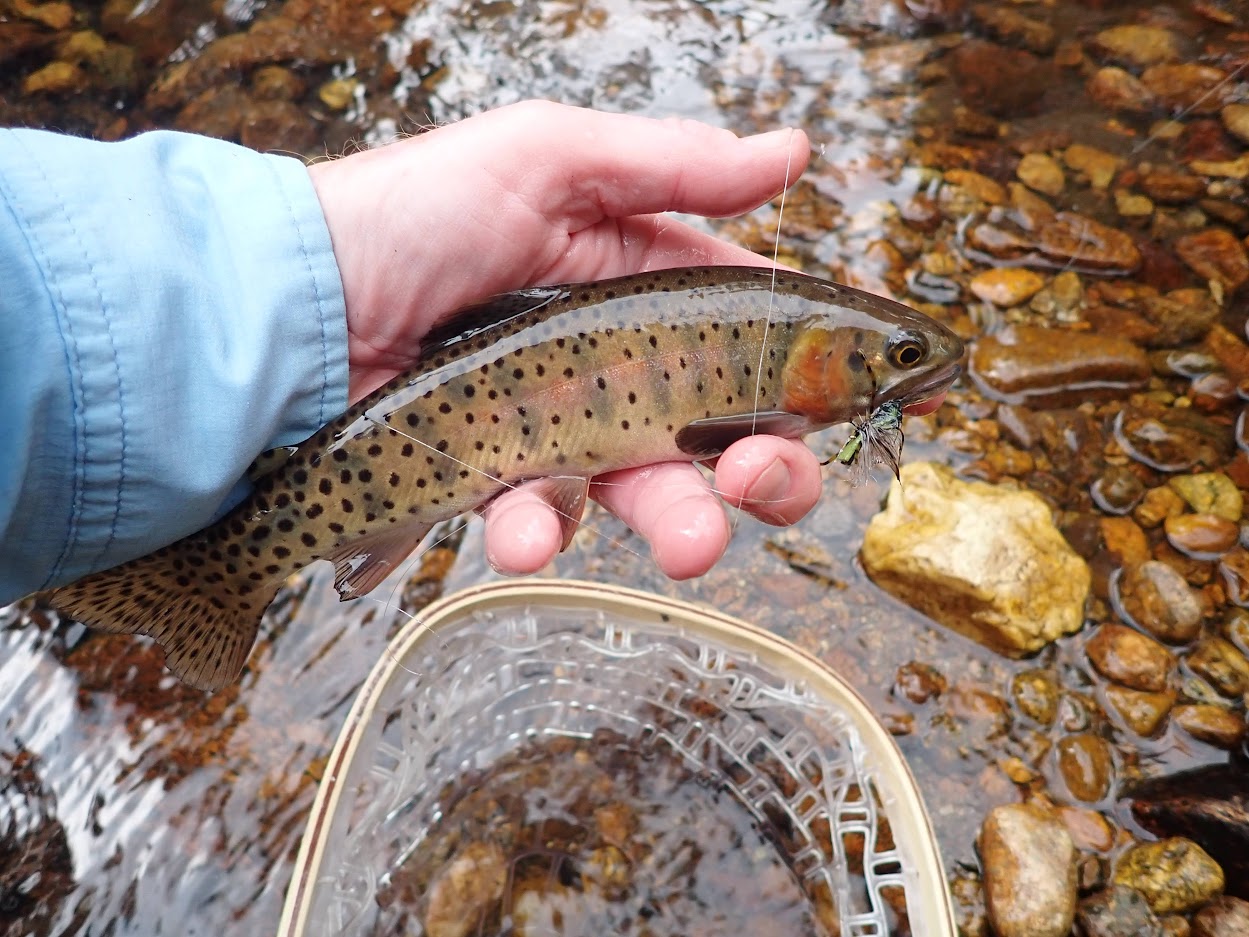 Marveling at This One

Tuesday evolved into another enjoyable day on a high country stream. The fish were small, but they more than compensated with their vibrant colors. I had mainly written off future visits to the Middle Fork, but it is back on my list of destinations for future visits. Of course, I need to be prepared to hike and wade in a difficult landscape.