A mild case of tennis elbow persisted since after my guided float trip on the Bow River in August 2017, but the discomfort escalated after two fishing outings on July 16 and 17. A dull ache on the top of my elbow expanded to a pinching sensation coupled with an increased burn on the bone on the underside of my right elbow. After my last fishing outing on the North Fork of St. Vrain Creek on July 17 I decided to rest my casting arm for a week.

On Wednesday July 18 Jane and I completed a hike along the Middle Fork of St. Vrain Creek, and I was intrigued by the rushing mountain stream that paralleled the hiking trail. I resolved to return with a fly rod in hand in a reasonable period of time. I began a program of icing my elbow on a daily basis, and I made an appointment with my primary care physician. The rest and icing calmed down the elbow discomfort, and my primary care physician wrote a referral to my favorite physical therapy clinic. 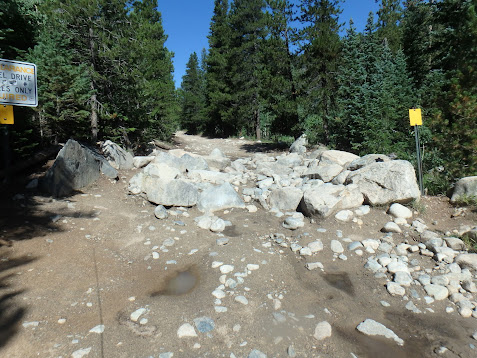 I Saw a SUV Drive Over This

Tuesday July 24 represented the one week anniversary of my last fishing trip, so I decided to test the arm before my scheduled physical therapy appointment on Wednesday. I made the relatively short drive to Camp Dick Campground and parked in the western trailhead lot. I pulled on my waders and assembled my Orvis Access four weight and tramped along the Middle St. Vrain Trail for twenty minutes, before I veered to the left and bashed through dead limbs and bushes, until I intersected with the tumbling Middle Fork. 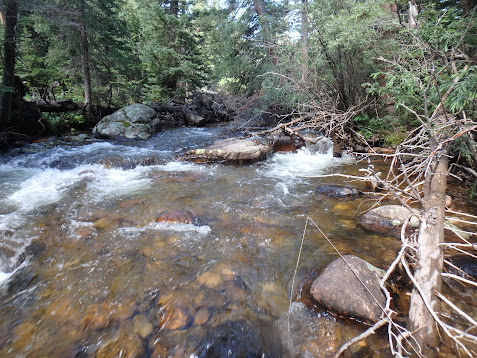 The air temperature was 71 degrees when I began, and during my time on the water it never peaked higher than 75. A very brief rainstorm passed by in the early afternoon, and the intermittent cloud cover prevented the strong rays of the sun from overheating the Rocky Mountains in my chosen fishing location. I had no basis for comparison, but the stream seemed to be at near ideal flows.

As this stream was brand new to me, I decided to charge in without any knowledge to guide me. The stream was a relatively high gradient section of fast moving water, and I suspect this was true of the entire section from the Peak to Peak Highway and west. The combination of the tight streamside vegetation and the rushing whitewater and large boulders made negotiating my way westward quite a challenge. 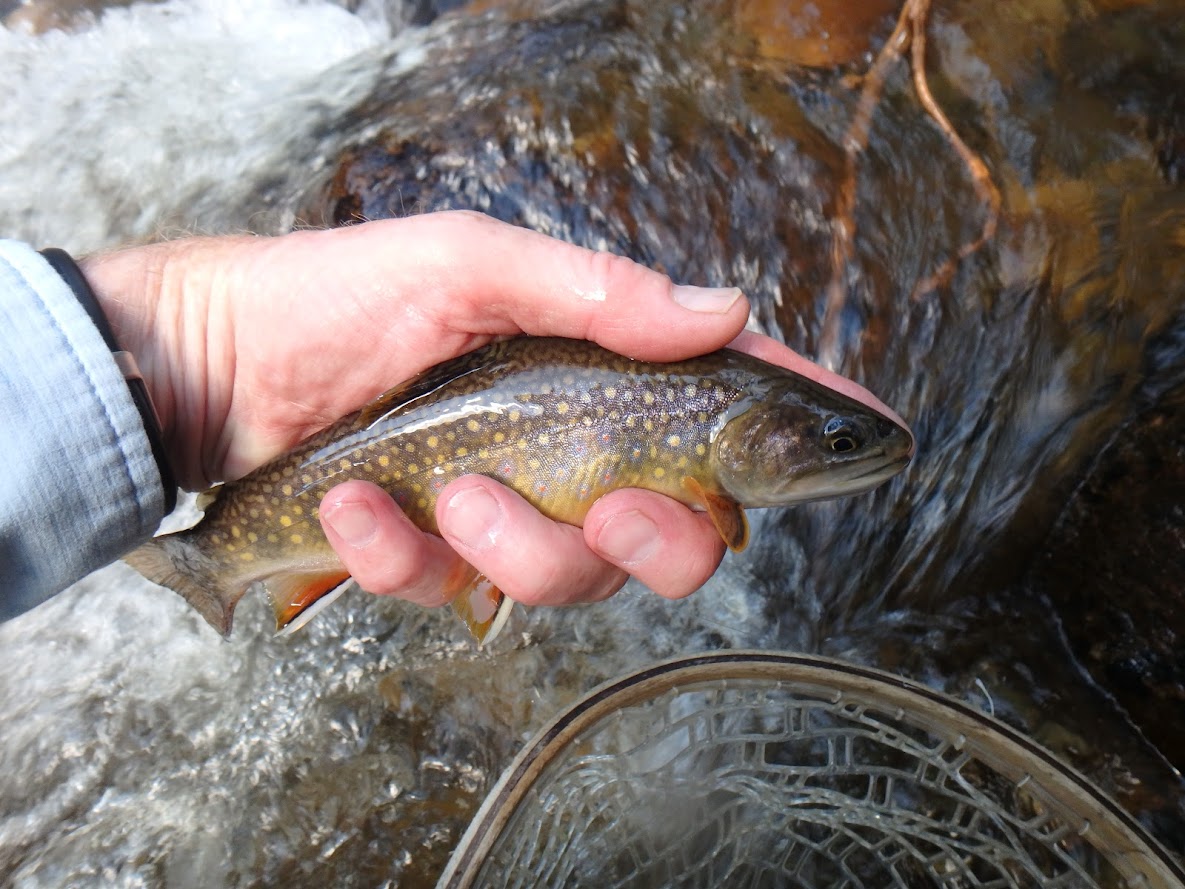 During my time on the medium sized creek I landed thirteen small trout. Ten were brook trout in the 7 – 8 inch size range and the other three were brown trout. Two browns measured out at nine inches and one lunker by Middle Fork standards stretched the tape to twelve inches. 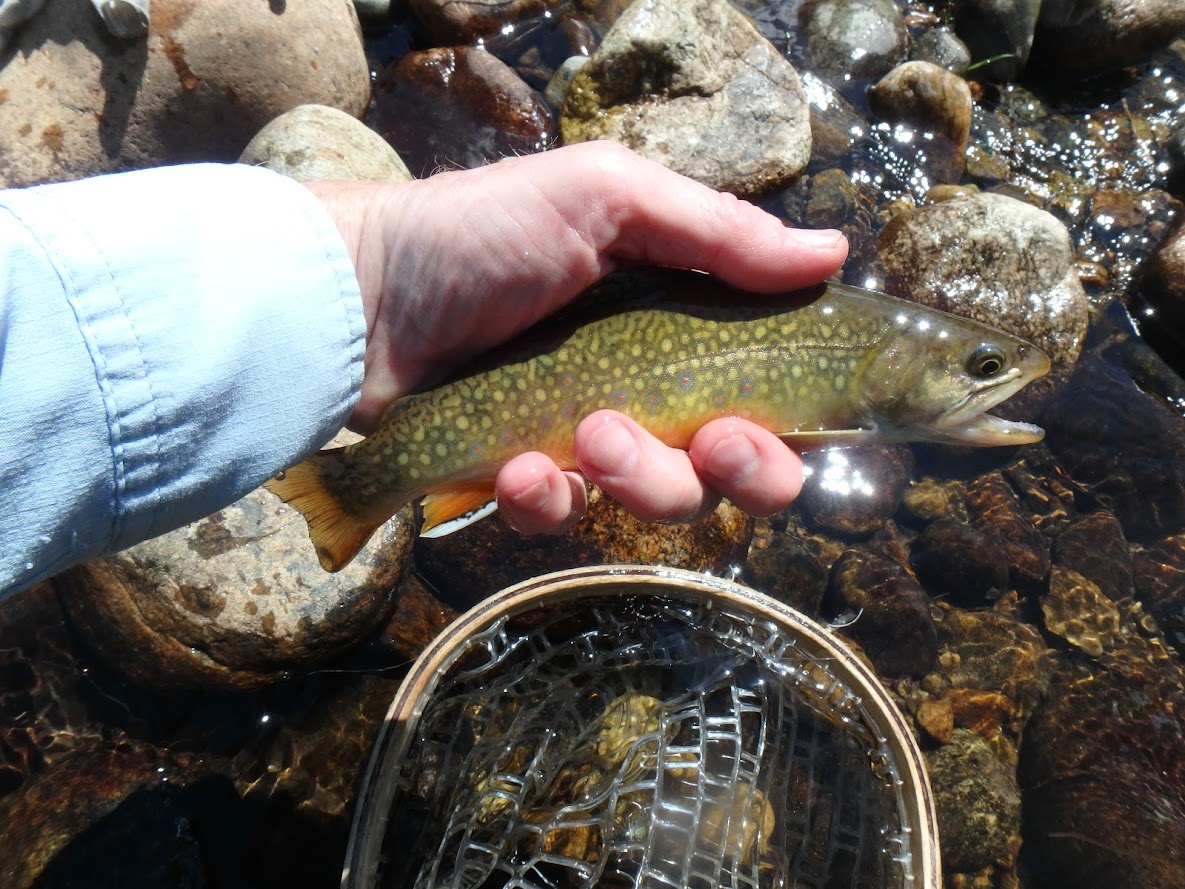 I began my fly fishing adventure with a gray stimulator, and this bushy attractor accounted for the first five fish, all brook trout. I sensed that perhaps larger fish were lurking beneath the surface, and perhaps they were more interested in nymphs and pupa, so I converted to a dry/dropper approach that consisted of a size 14 hippy stomper with a peacock dubbed body and a beadhead pheasant tail on a short two foot dropper. The hippy stomper attracted two trout to surface for a bite, and the beadhead pheasant tail delivered the best fish of the day to my net; a twelve inch brown trout. All three of these trout arrived at my net from a gorgeous pool; one of the few quality fish holding lies that I encountered. 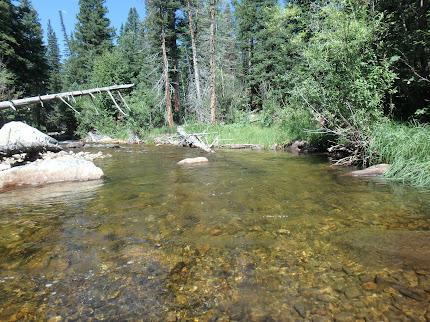 Best Pool of the Day

The brook trout clobbered the hippy stomper near the tail of the pool, and I was beginning to doubt the efficacy of the pheasant tail. I flicked the two fly combination upstream five feet in front of an exposed boulder in the center of the pool, and suddenly the hippy stomper took an obvious dive. I immediately reacted with a solid hook set, and the bend in the four weight signaled, that the fish frantically attempting escape maneuvers was larger than the heretofore diminutive brook trout. I guided the thrashing trout away from a branch and scooped it into my net, and my enthusiasm for the Middle St. Vrain suddenly skied to new levels. 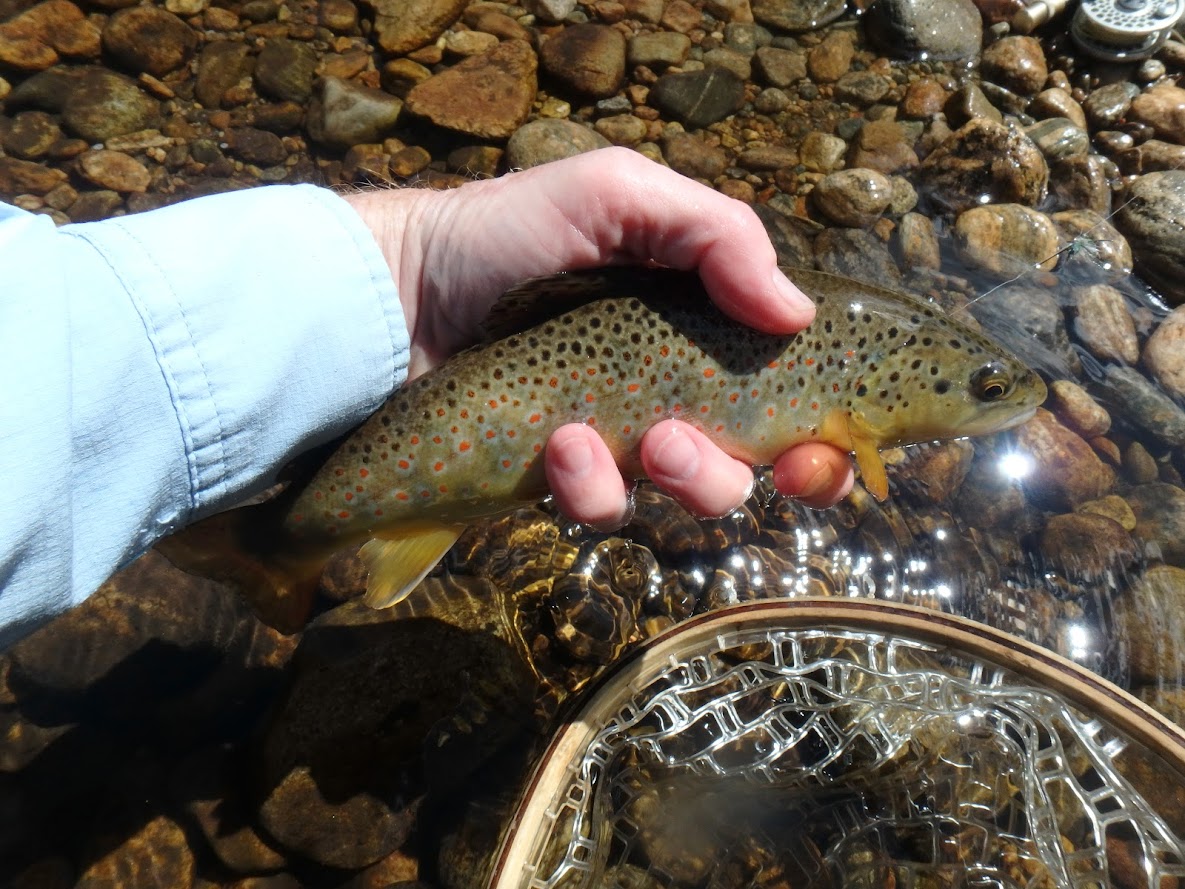 Unfortunately as I progressed upstream, the action waned. I covered quite a distance with no fish encounters, and I attributed the disappointing circumstance to the lack of quality fish holding locations. The creek was simply a cascade of whitewater, and the effort to move from one marginal target spot to the next was excessive. By noon I found a nice round wide rock in a clearing used by disbursed campers, and I rested my arm, while I munched my sandwich. I pondered the fast stream and my morning results and concluded that I would try a size 12 Chernobyl ant and a salvation nymph dropper. The larger foam top fly would not require frequent squeezing and drying, and it could support the larger beadhead nymph, which I surmised might be more visible to the trout in the tumbling oxygenated environment. 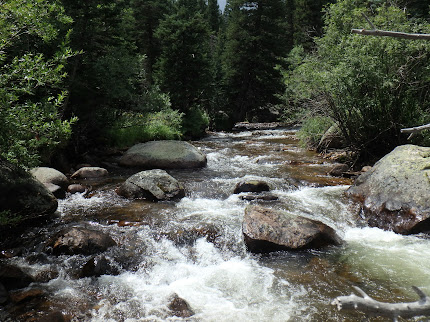 The move paid off somewhat, as I added three additional small brook trout to the fish tally. All of the early afternoon netted fish nabbed the Chernobyl on the surface, and all were brook trout in the seven inch range. During this time period some dark clouds developed to the east, and I was certain that I dodged the storm, until a deafening thunderclap ricocheted off the surrounding mountains. I nearly jumped out of the water, as I reacted to the startling natural crash.

Another lull in action caused me to once again pause and reexamine my approach. In previous situations in high gradient mountain settings I utilized a three fly dry/dropper with success. Two droppers provided additional weight, and I theorized that reaching greater depth in the plunge pools might yield more fish. I knotted a yellow fat Albert to my line to support two beadheads, and then I added an ultra zug bug and a pheasant tail. Once again the change reversed my fortunes, and I registered three more catches including another brown trout that chomped the ultra zug bug, but then I once again endured a slump. 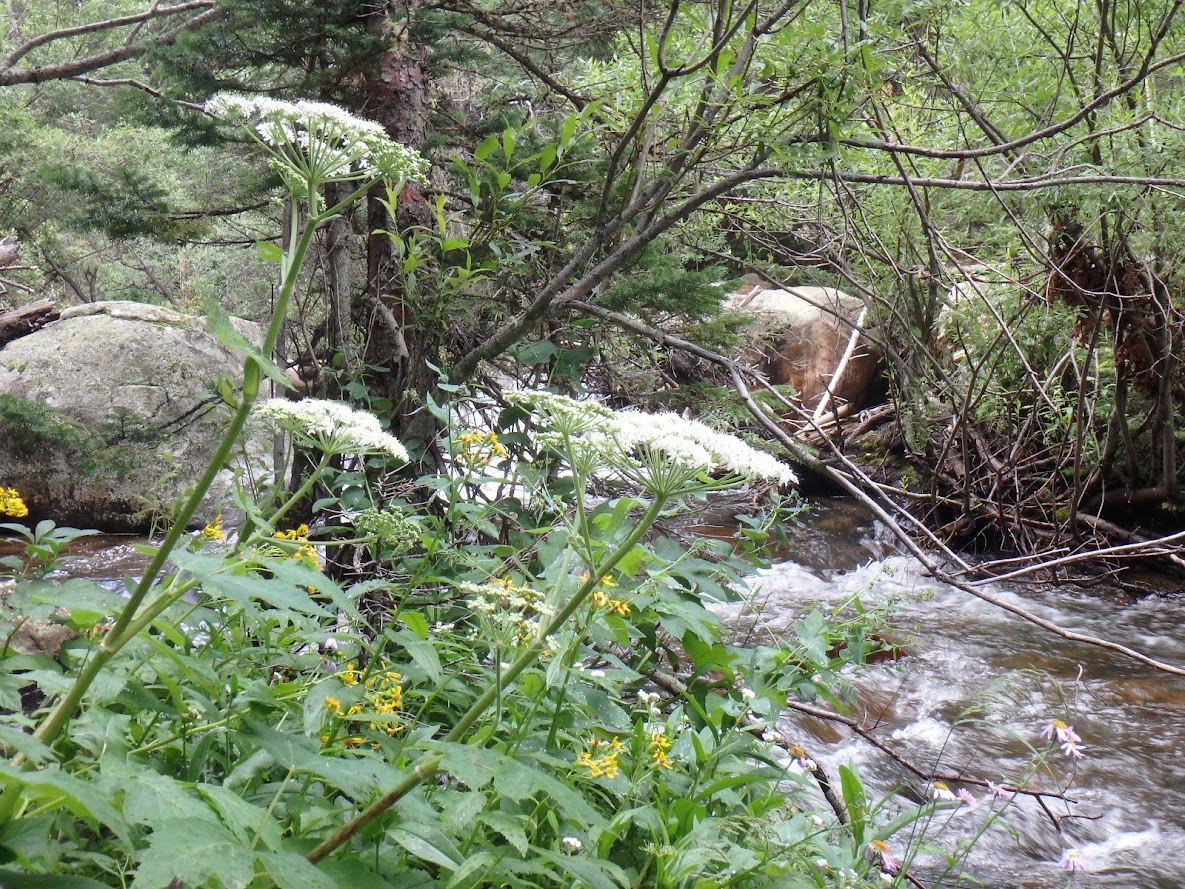 Another dark cloud hovered overhead and a few large raindrops spurred me to extract and pull on my raincoat slightly in advance of a brief heavy deluge. The rain only lasted for five minutes, and I continued my upstream migration with the dry/dropper method. Alas I plateaued at thirteen trout for the day, and the number of attractive fish holding lies shrank, as the gradient of the stream surged even beyond the section that I already covered. Fatigue dominated my thoughts, and the sun reappeared to create a steamy environment, and I faced a thirty minute hike back to the parking lot. I reeled up my flies and called it a day.

Thirteen trout was a reasonable total for four hours on a small mountain stream, yet I was undeniably disappointed. I was quite excited, when I discovered the clear tumbling branch of the St. Vrain on July 18, and I was certain that it received low pressure and would reward the diligent fisherman willing to hike away from the trailhead. I crashed through deadfalls and brush and scrambled over boulders and fallen trees, and I was convinced that the extra effort would be rewarded with a large quantity of unsophisticated albeit small trout. In reality the extra effort did not justify the results. As anticipated the fish were small, but fish density was low thus requiring abnormal effort to cover a significant amount of water in challenging wading conditions. I am unlikely to return in the near future.