Based on past years I should have known what to expect, and surely a thirty-one fish day is a numbers booster, but unlike several previous visits twenty-eight of the landed fish were small brookies in the six to eleven inch range, and the mix was definitely skewed on the small end. Three cutbows graced my net, but one was a prize for such a small stream, as it measured sixteen inches and flaunted a wide girth. I fished deeper than my farthest penetration previously, and I am not convinced the extra steps were worth it. The section that I covered was characterized by fast wide shallow riffles and high gradient, and I waded considerable distances between promising spots. The creek and I had an adversarial relationship, and on this day, the creek won. By 4:00PM I was a very weary dude facing a long return hike. 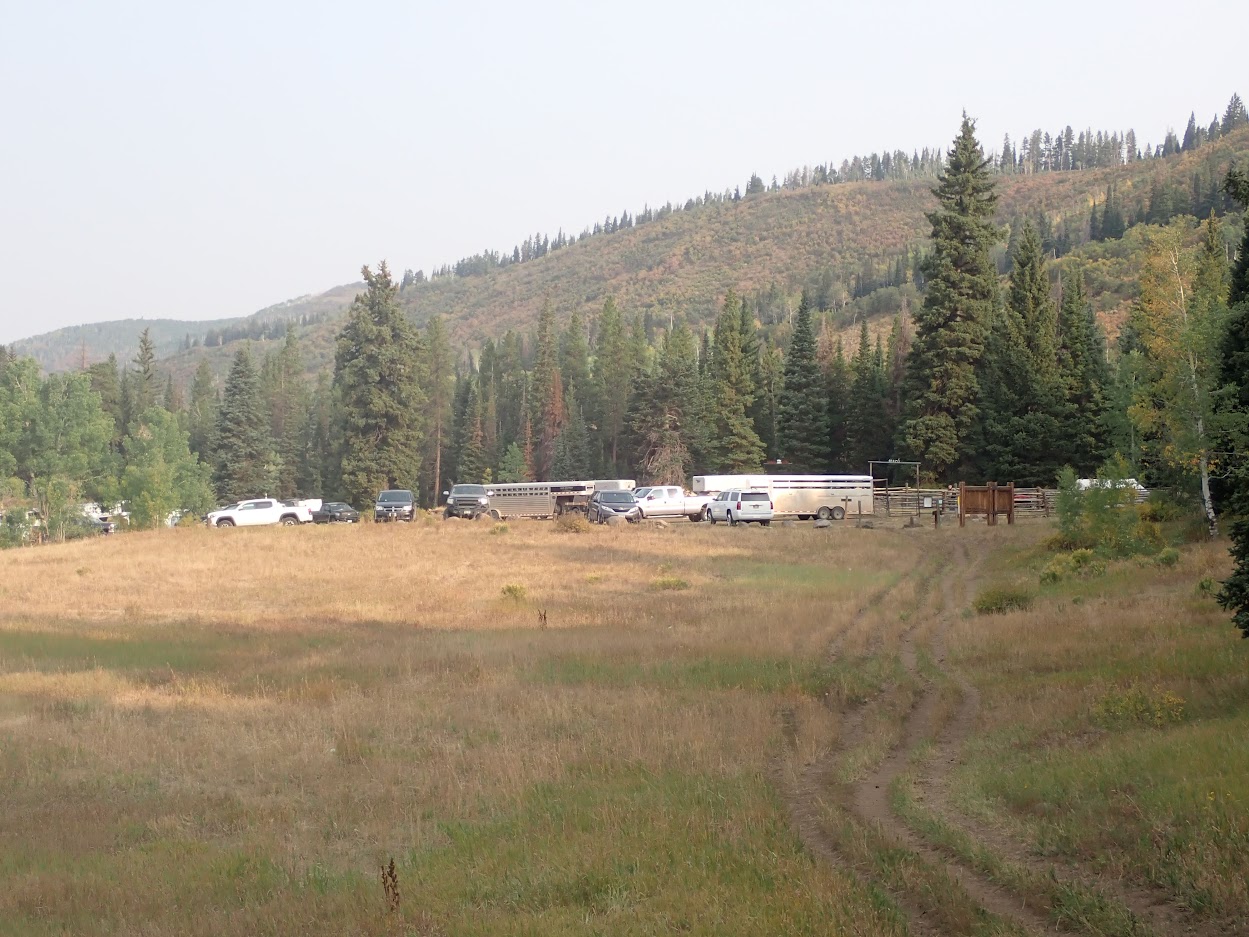 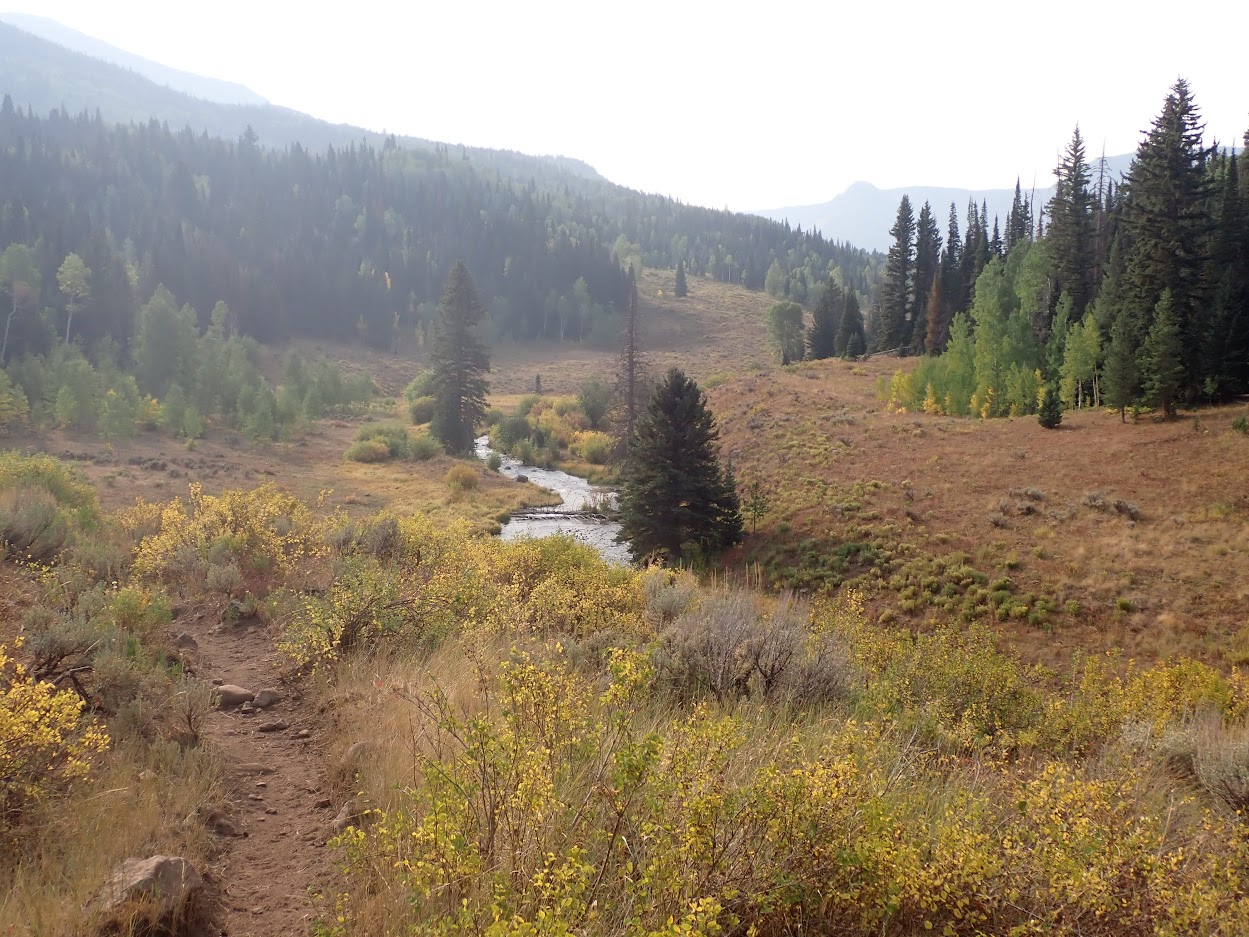 The weather was terrific, and the creek was clear and cold. I began with a peacock hippie stomper, since it shined on Wednesday on the North Fork, and it quickly built the fish count to nine. I was very optimistic at this point, but for some reason in the half hour before lunch steady action changed into a slump. In an effort to inflate the catch rate I added a salvation nymph to the hippie stomper after lunch. The ploy initially paid dividends, as I landed fish number ten and then approached a spectacular deep pool.

I lobbed a cast to the frothy head of the deep pool, and on the second such effort a large form grabbed the trailing nymph. I instantly recognized that this was not a brook trout and allowed the cutbow slack line, as it charged upstream and then reversed itself and shot downstream. I began taking a few steps to follow my prize catch, but the small stream giant suddenly turned its head, and the nymph lost its grip. As the reader might imagine, I was very distraught over this turn of events. 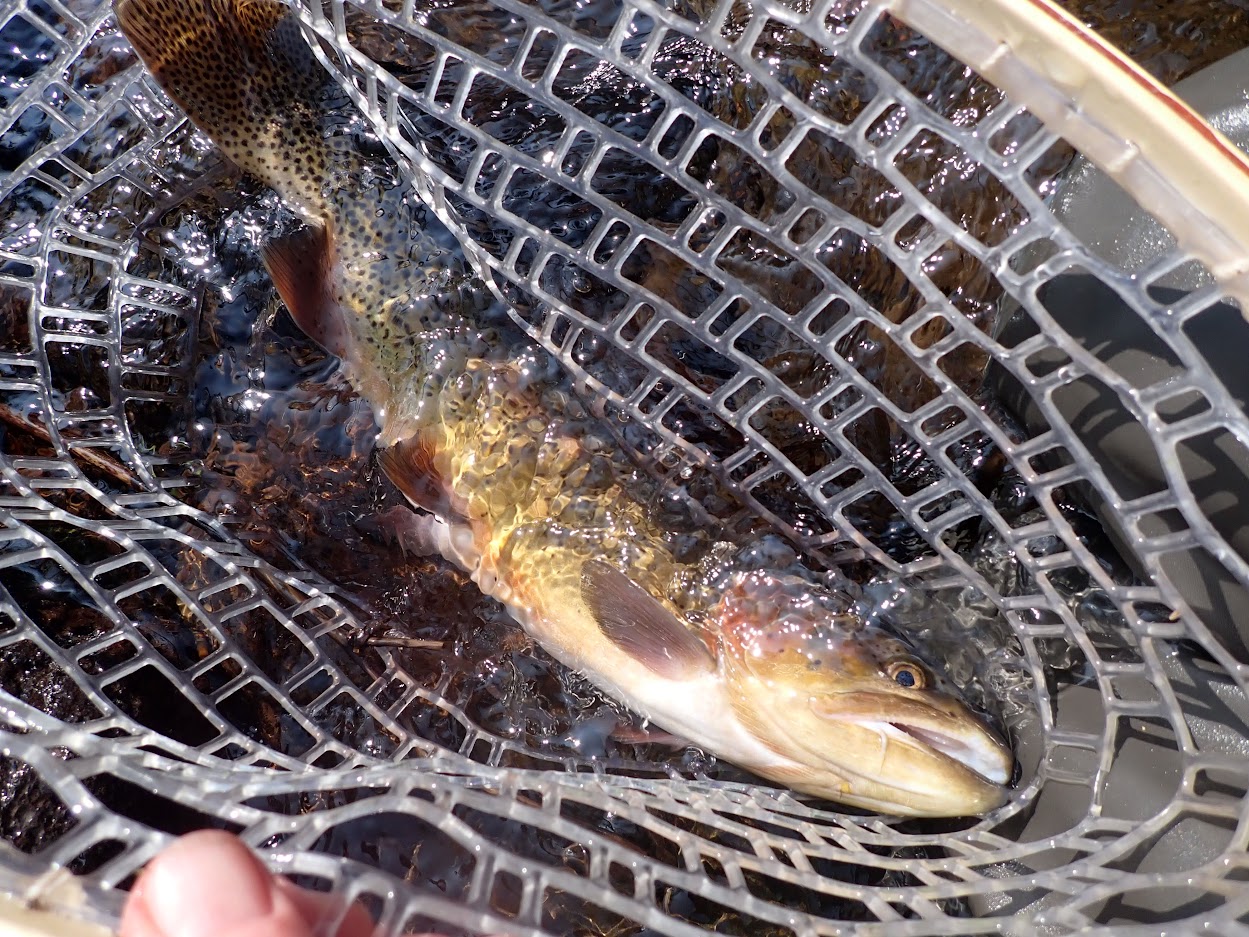 Easily the Best Fish of the Day

I inspected the flies and composed myself and tossed another cast to the deep center of the churning whitewater. As the two fly dry/dropper crept toward the center between two fast seams, the Chernobyl ant once again took a dive, and for a brief second I spotted another Marvine Creek monster. Unlike its pool neighbor this fish dove and headed in a relentless drive to a large exposed rock along the left bank. I made a futile attempt to restrain it from its intended destination, since I suspected the near side of the rock held a subsurface obstruction such as a branch or log. My intentions were admirable, but my performance was lacking. Suddenly I no longer felt the writhing weight of a fish, and after saying a few unkind words I decided to invade the depths of the pool. I waded to the outer edge of the rock, while holding my rod in a forward position, and suddenly I once again felt a throbbing weight. Apparently the fish on the end of the line hunkered down next to the rock, and my invasion of its safe harbor encouraged a move. I carefully applied side pressure to the obstinate brute, and in short order I scooped it into my net. In this instance some celebratory whooping and hollering accompanied my success. The sixteen inch slab made my day, and I snapped a few photos and recorded a video, before I prodded the wide body to swim for freedom. It did not require much prodding. 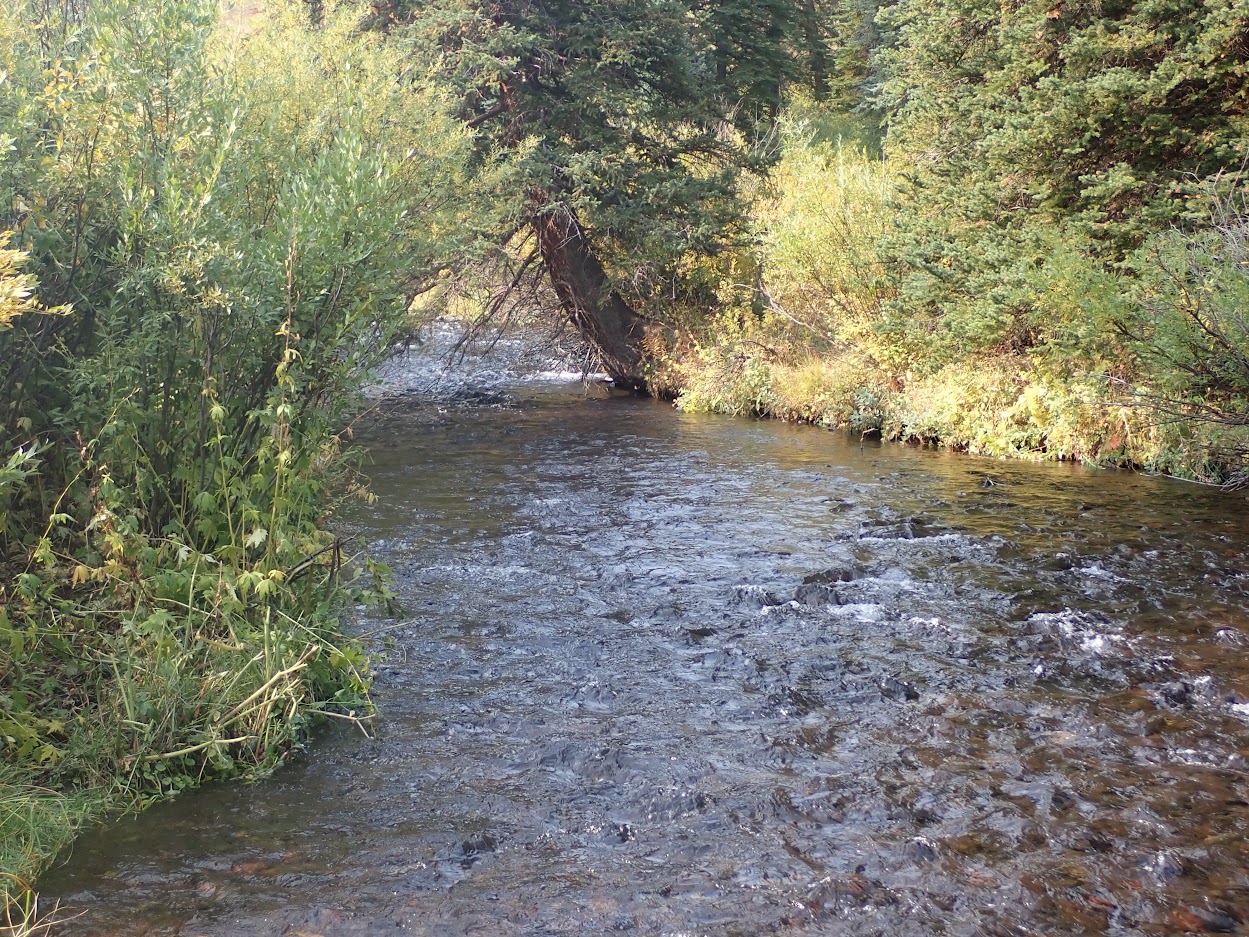 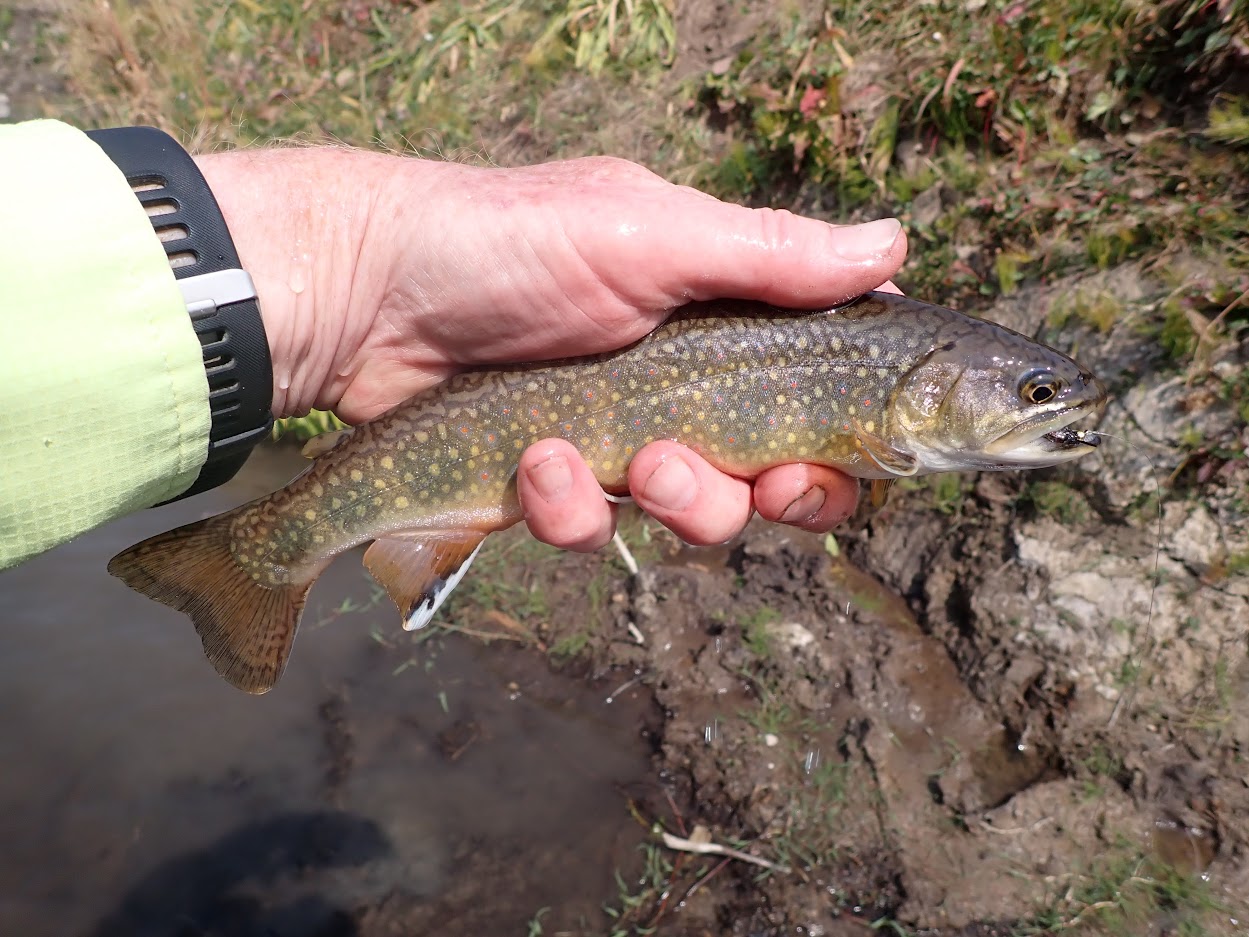 I continued my upstream advancement, and notched a couple more brook trout on the salvation to reach thirteen. The Chernobyl ant was not contributing to the cause, so I removed it and reverted to the hippie stomper. It was at this time that I encountered a massive beaver pond. I skipped around the slow moving tail section and progressed to the midsection, where I began executing casts to the fast entering run and the deep slower moving areas that bordered the seams. The area enabled me to elevate the fish count from thirteen to seventeen, as an array of small brook trout found the salvation to their liking. 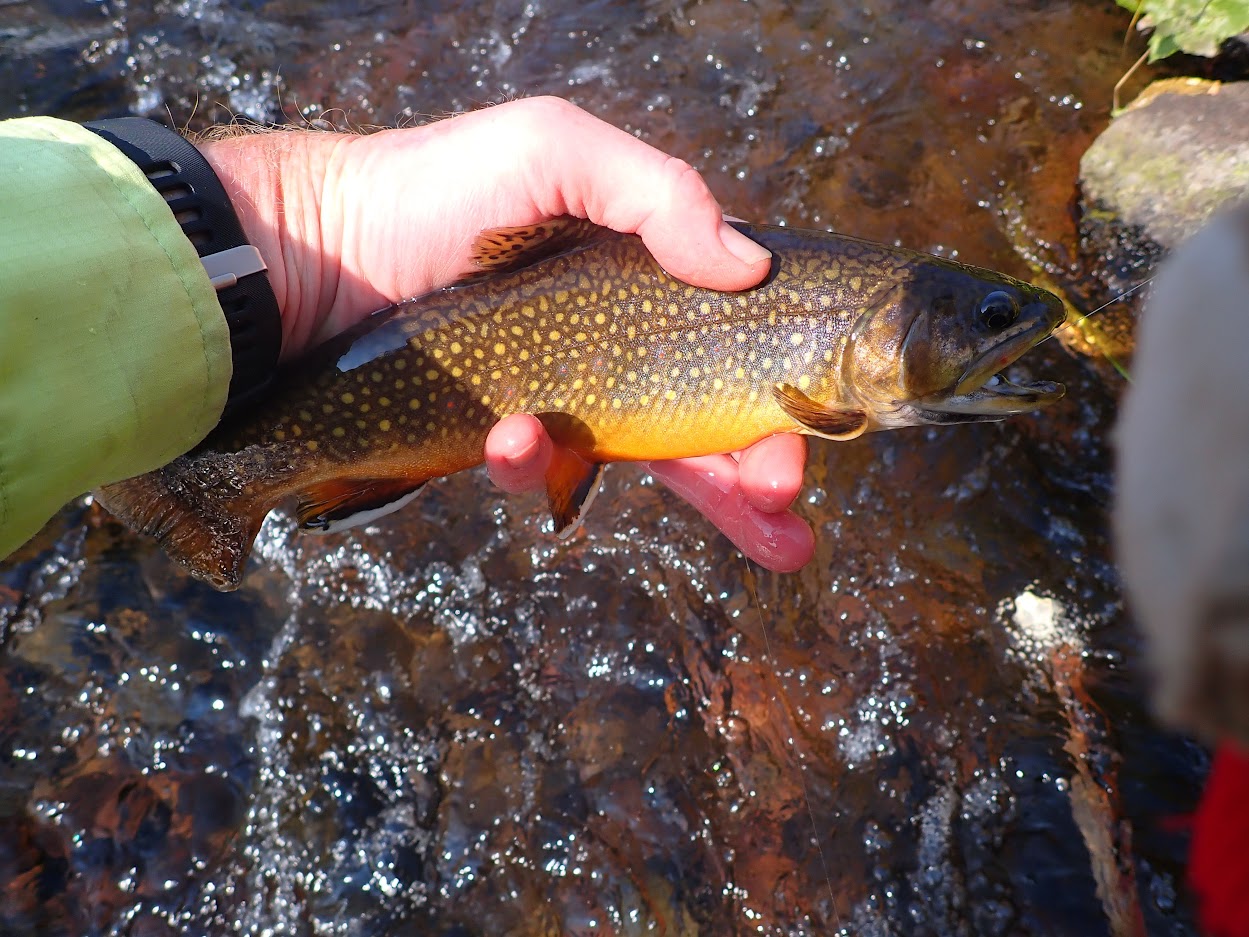 One of the Better Brookies from Marvine 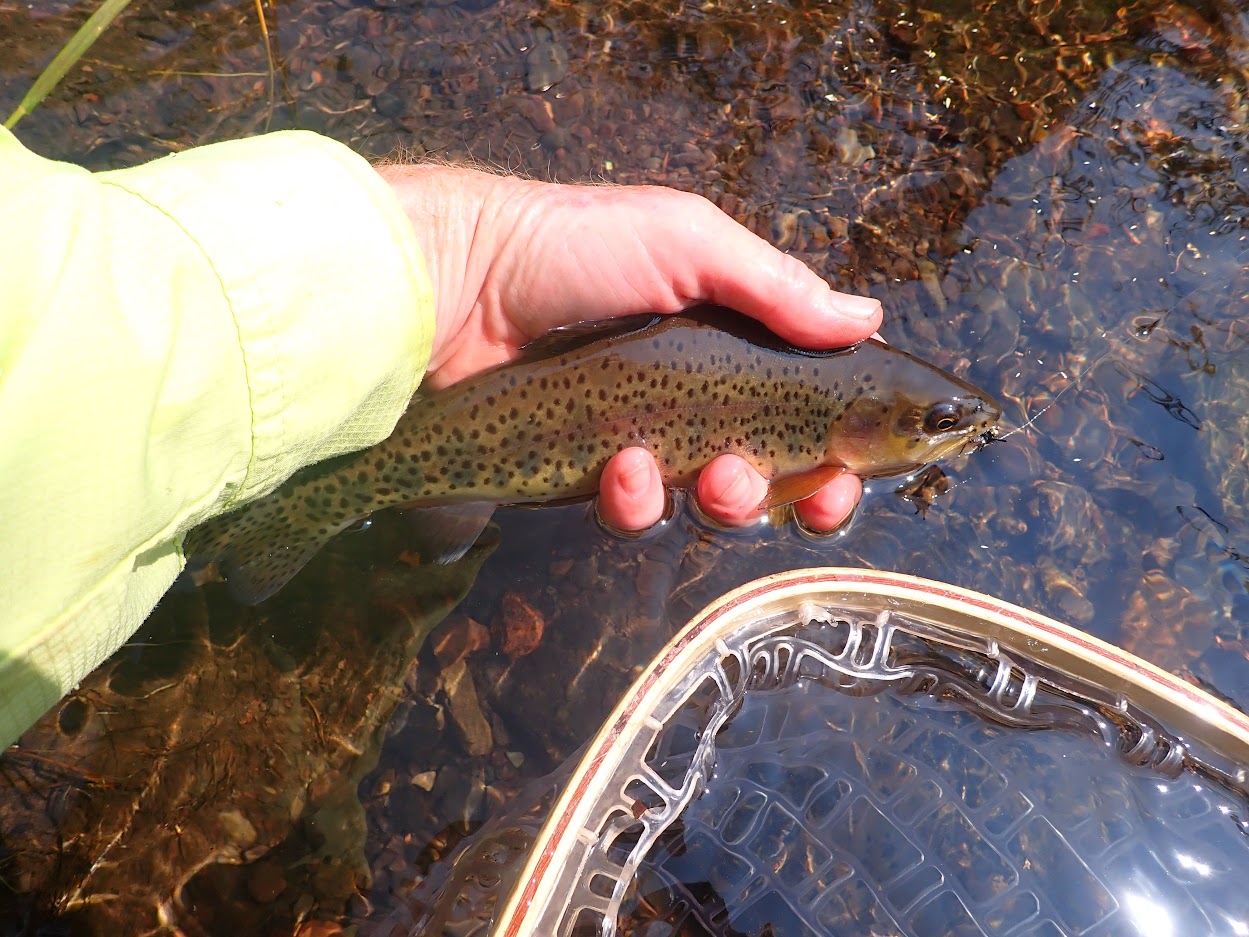 When I progressed beyond the beaver pond, another period of futility impacted my fly fishing karma. I pondered the situation and decided to made a radical change to my approach. Much of the water was moving at a rapid velocity, and I concluded that additional weight was the answer. I knotted a size 8 yellow fat Albert to my line, and beneath it I added a bright green go2 caddis pupa and salvation nymph. The three fly system was moderately effective, and the fish count gradually rose to twenty-seven. Each of the flies accounted for a few fish, but none stood out as more effective than the others. 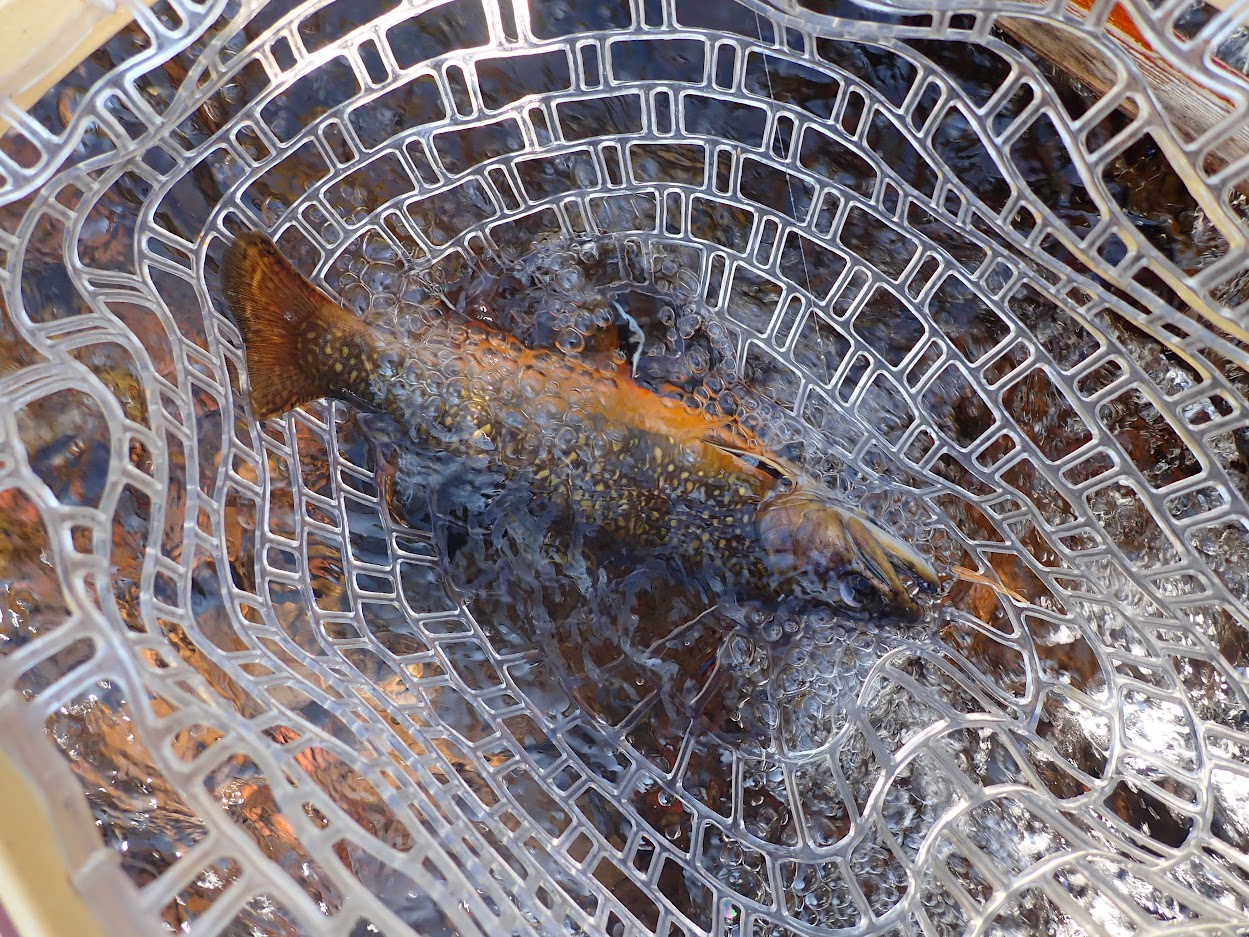 I was stuck on twenty-seven as my watch registered 3:00PM, and thirty fish were within my grasp. Very few promising spots were appearing, and the dry/dropper configuration lost its luster. I decided to make a last ditch effort and changed to a double dry consisting of the hippie stomper and a size 14 olive stimulator. Bingo! Three brook trout attacked the stimulator, and I rejoiced at reaching the thirty mark. On the return hike I paused at the beaver pond and duped another brook trout on the stimulator to end the day at thirty-one. 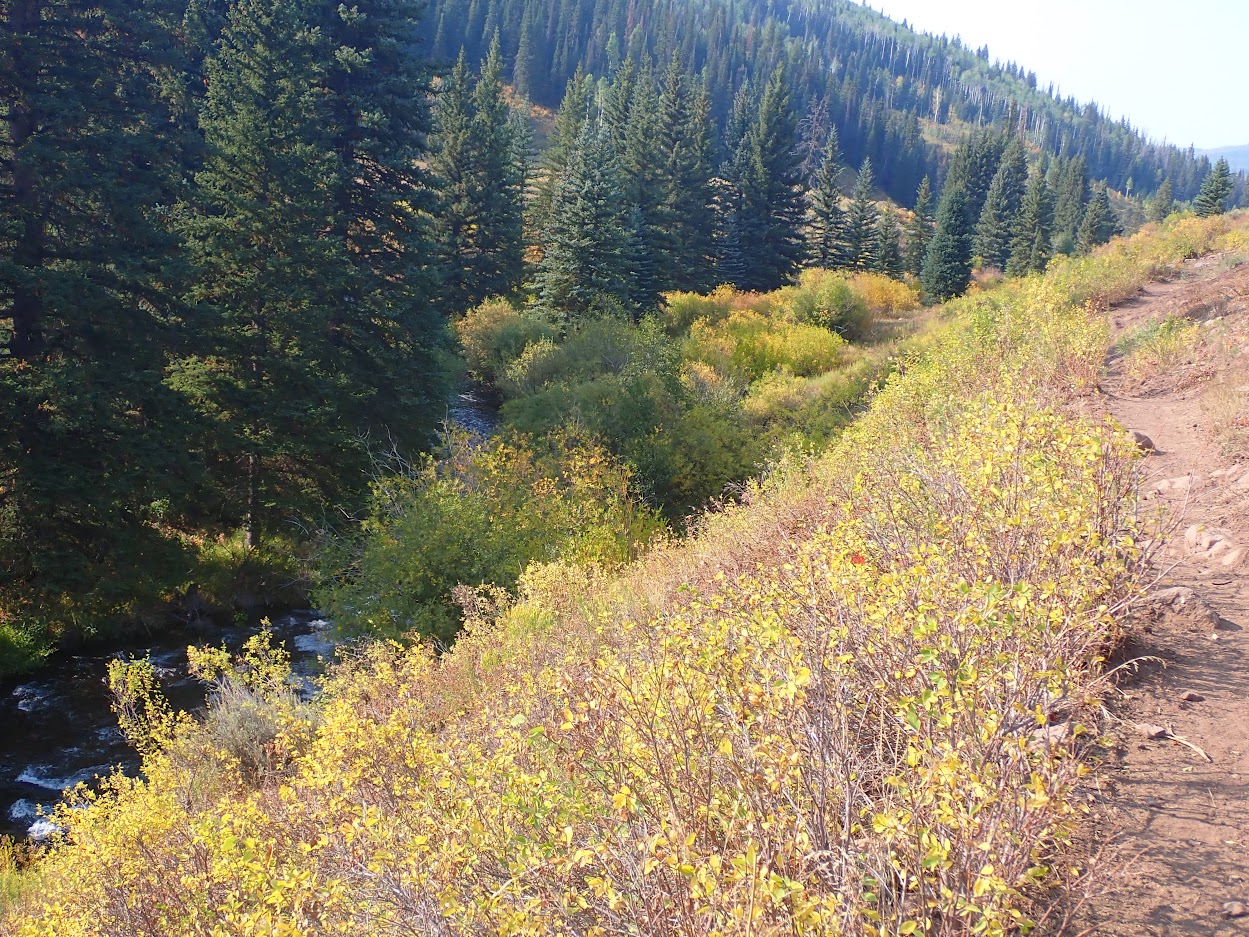 The fish count was in line with previous visits to Marvine Creek; however, the size of the brook trout seemed diminished and fewer cutbows joined the mix. Large cutbows dominated my recollection of previous days on Marvine Creek, and I was unable to overlook their absence on Thursday. I also discovered that the structure of the creek after a more distant hike did not justify the effort. Thursday was a decent day, but not an exceptional outing.