I elected to fly fish Marvine Creek on the third day of my Flattops adventure. After two successful visits in previous years, Marvine became a Flattops mainstay on my agenda.The weather on Monday was once again ideal with the high temperature in the upper sixties and decent cloud cover much of the day, although rain was never a serious threat. 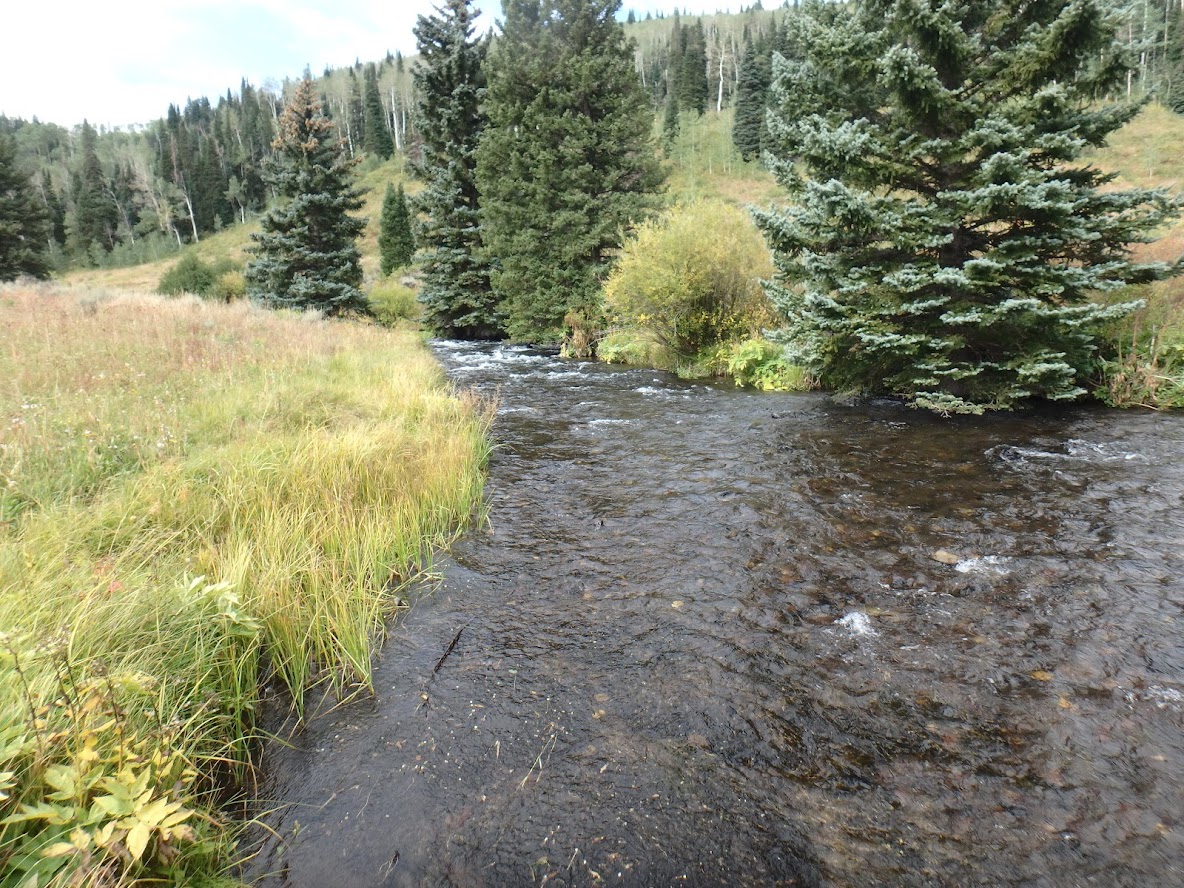 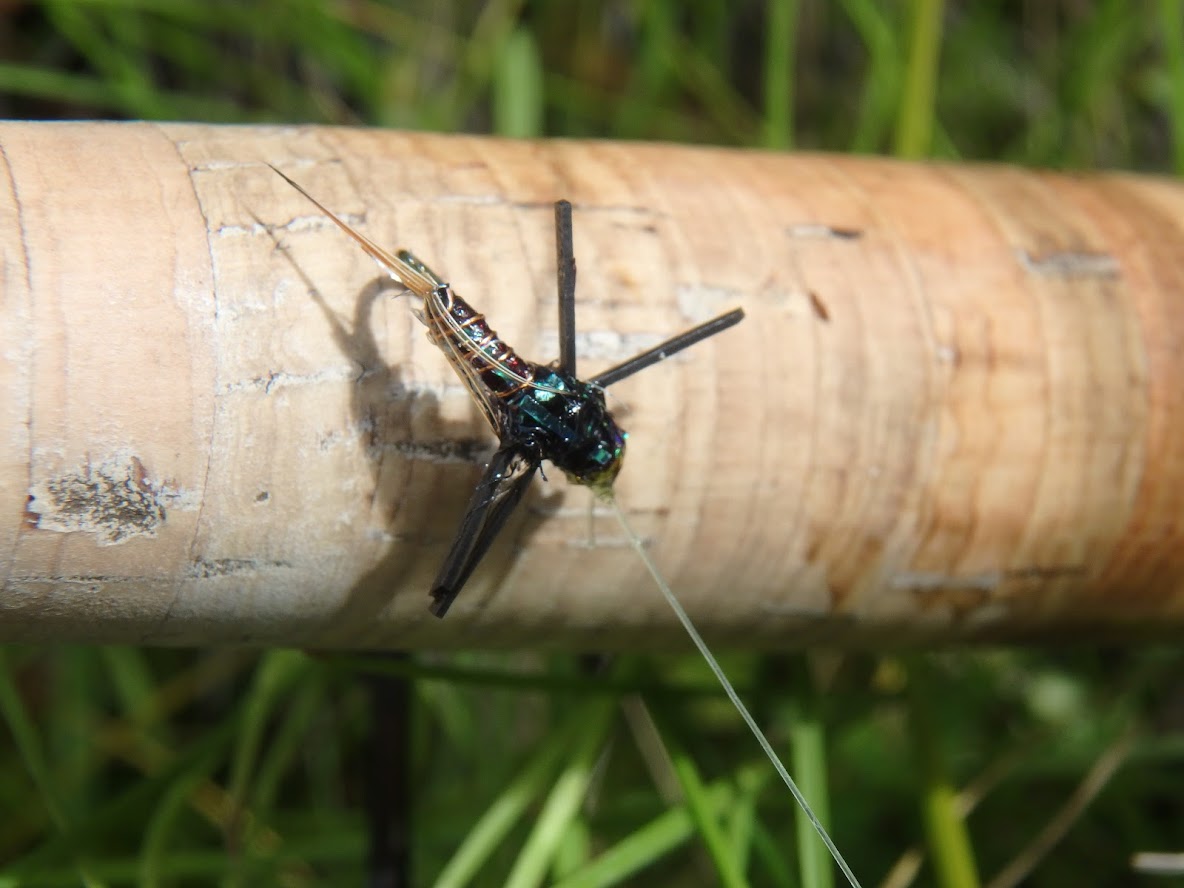 I began my day in an open area with a peacock hippie stomper, ultra zug bug, and salvation nymph. I quickly discovered that the two fly dropper was too long for the small stream and eventually halved the length of the leader and fished a hares ear as the top nymph and the salvation as the bottom fly. The hippie stomper became irrelevant after an initial burst of success, so I replaced it with a tan pool toy hopper. This dry/dropper configuration was the most successful, although when the action slowed in the afternoon, I eliminated the salvation and fished a hares ear as a solo dropper. After a bit the trout lost interest in the hares ear, and I returned to the salvation, but it failed to improve the success rate in the late afternoon. 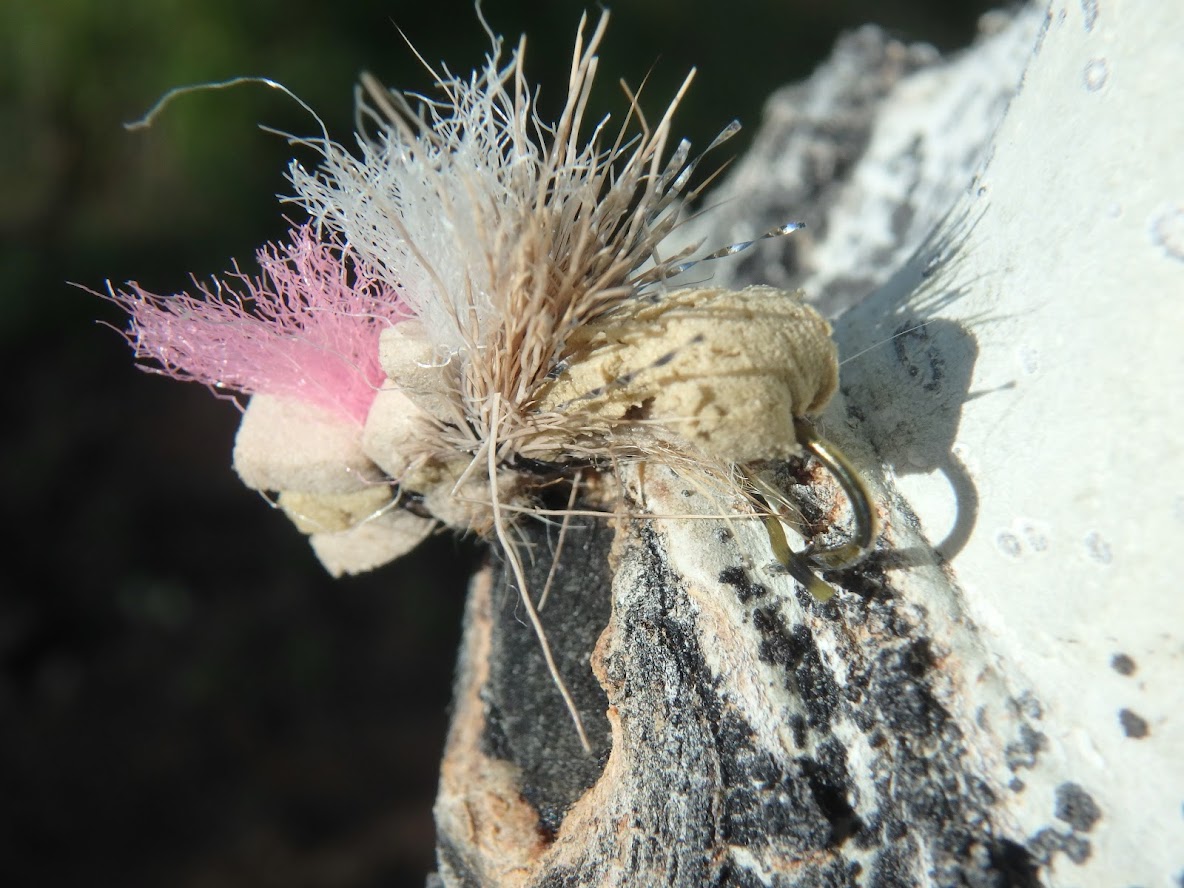 Teeth Marks and Missing Legs after a Day of Fishing 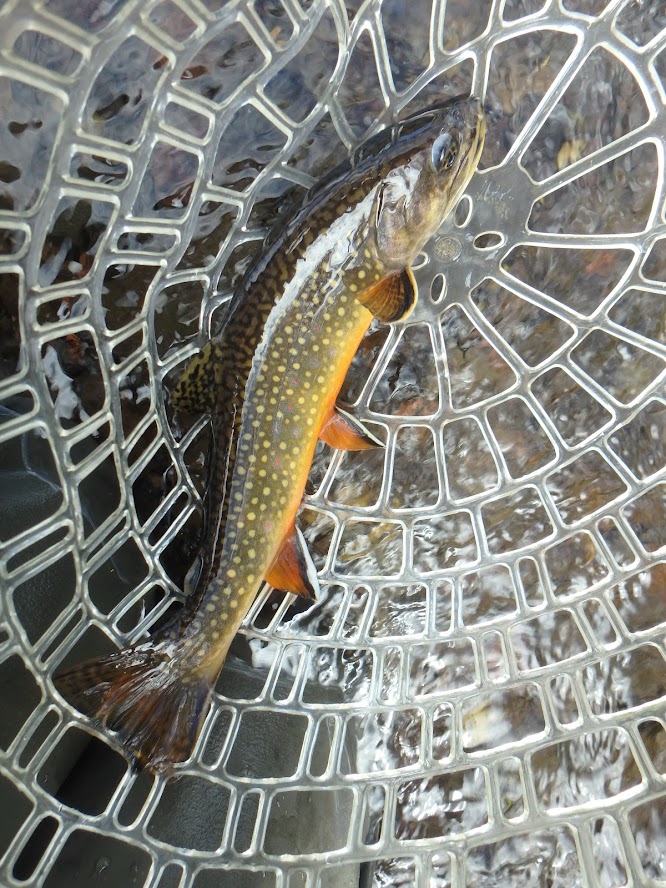 The pool toy hopper was easily the top producer, as brook trout could not resist the size ten foam terrestrial with dangling legs. The reason was obvious, as hoppers launched into the air with every stride on my hike to and from the creek. At least twenty of my landed trout rose to and crushed the imitation grasshopper. 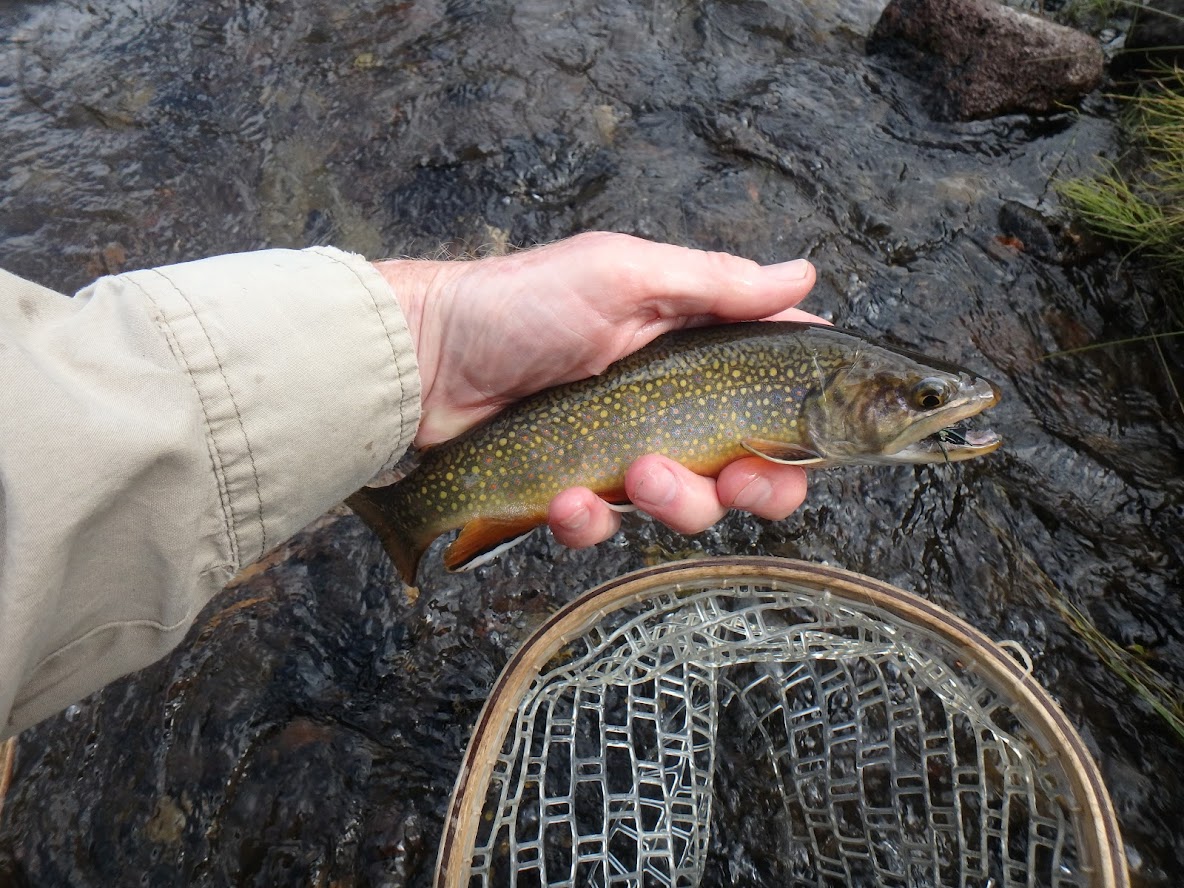 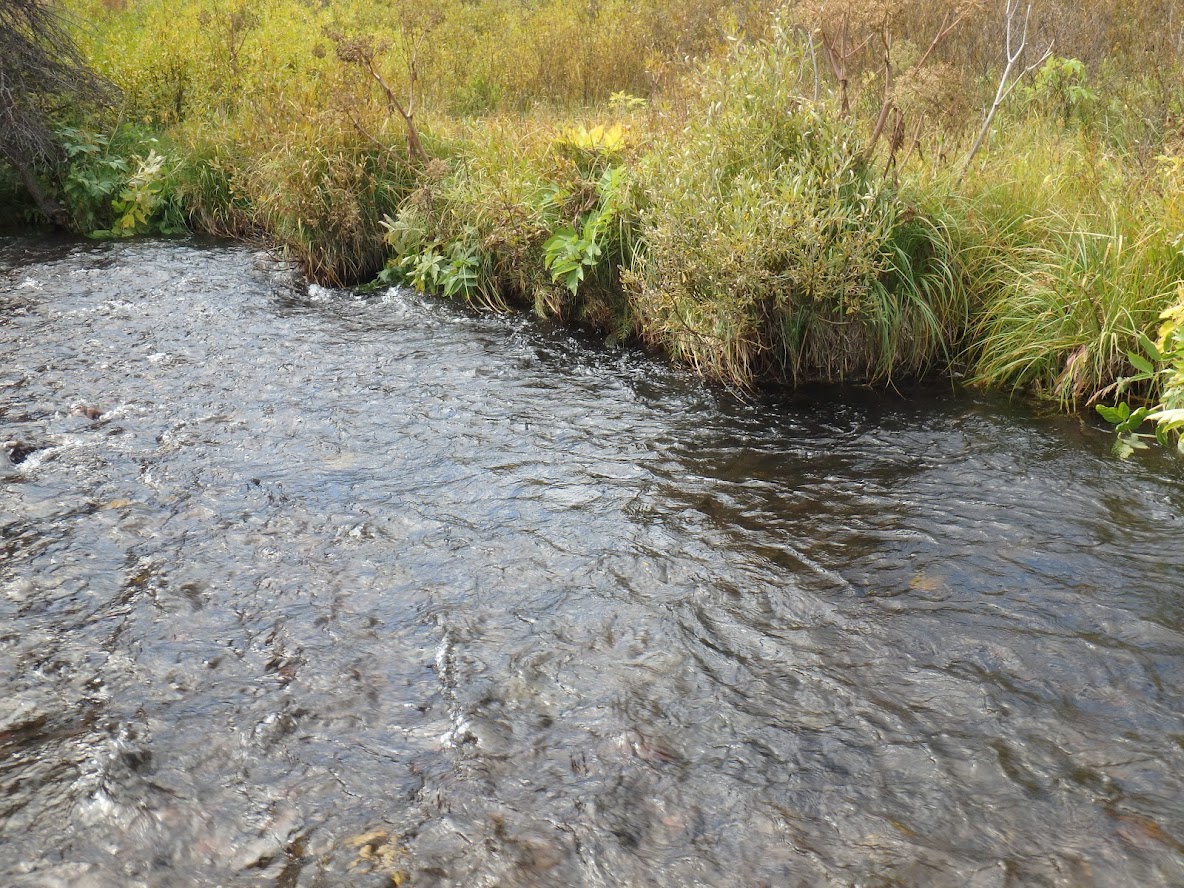 During the noon to 3PM period the fish count rose from eight to thirty-one, and this segment of the day coincided with my deployment of the short leader, three fly configuration. Quite often a brook trout would reveal its location via a refusal to the hopper and then grab the hares ear, as it trailed near the surface on the short leader. 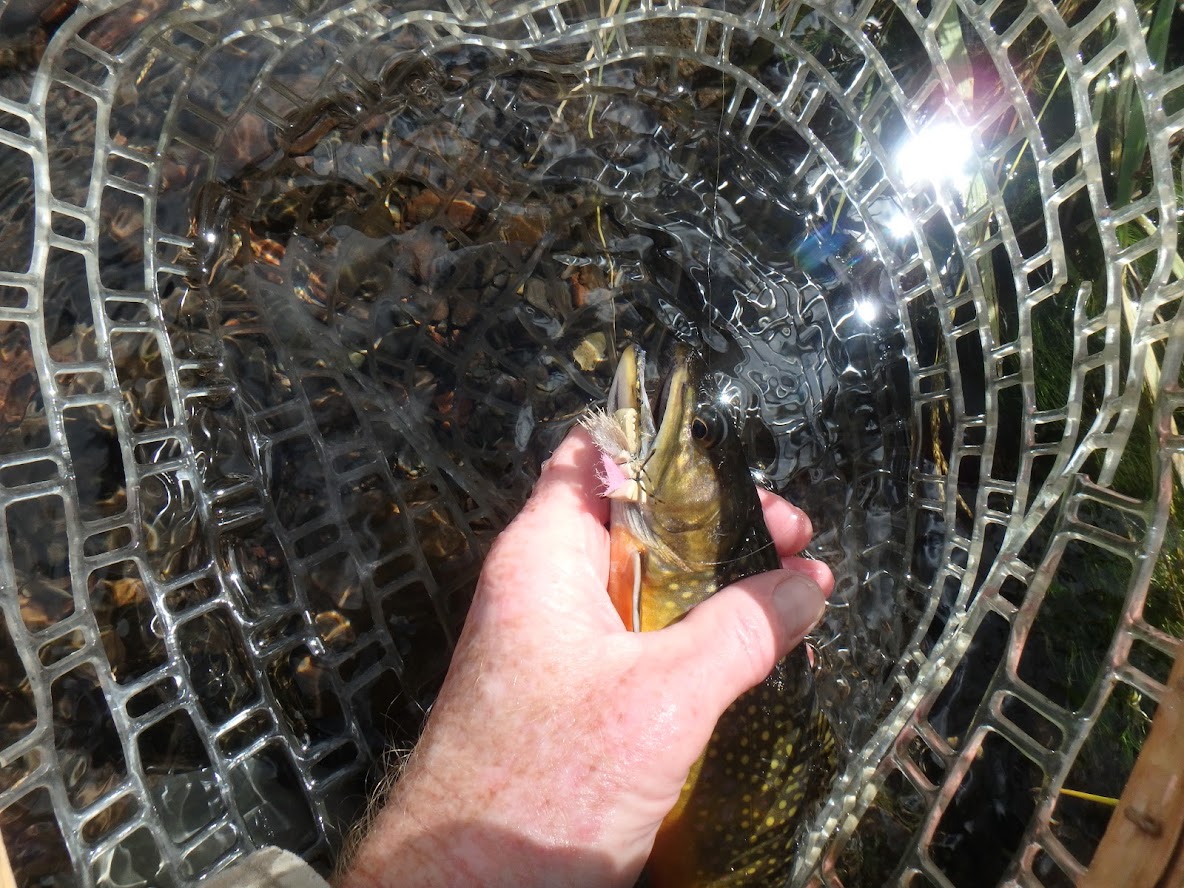 Could Not Resist This Mouthful 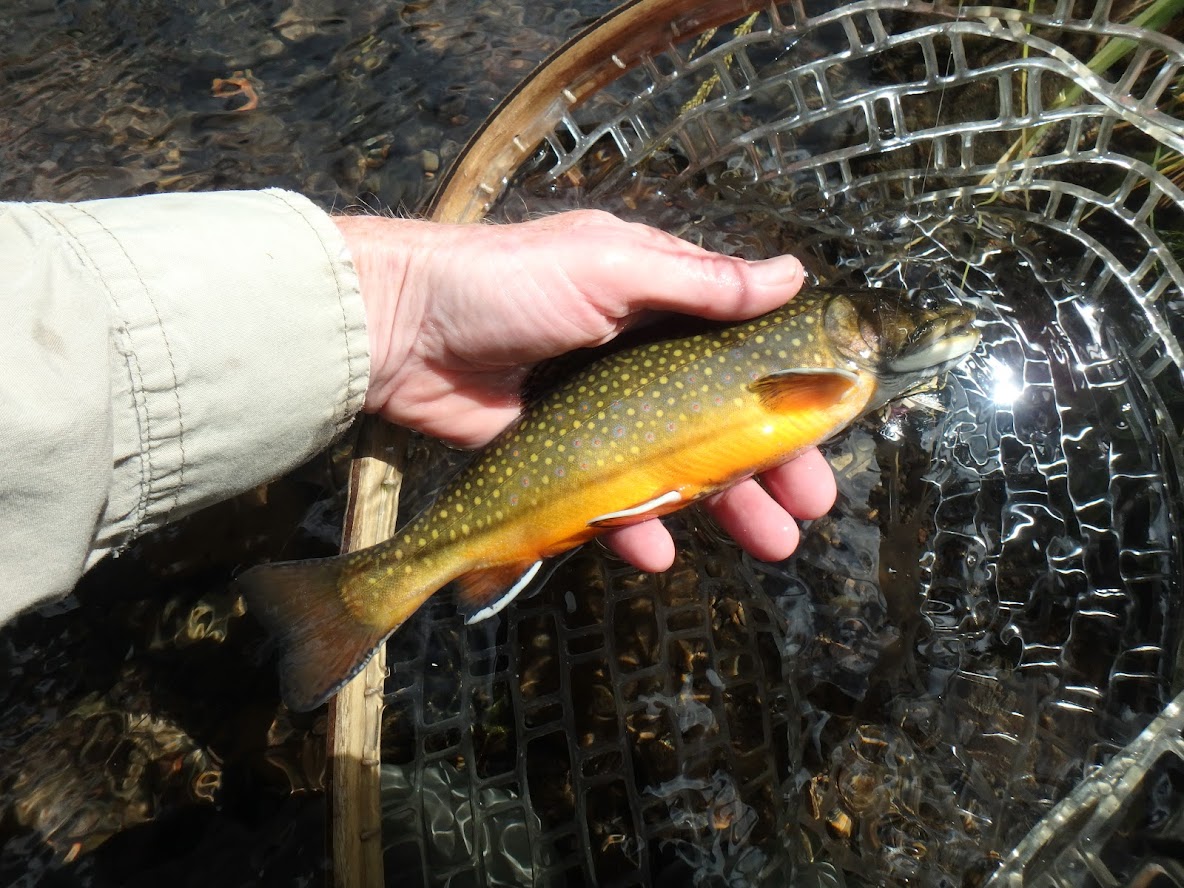 All except three of my catches were brook trout, and the char parade included quite a few ten inch jewels with striking orange underbellies. The three fish that were not brook trout were cutbows, and these fish were the highlight of the day. The three outliers measured sixteen, fifteen and fourteen inches; and they were very pleasant surprises among the steady stream of brookies. All three emerged from prime lies on the high gradient stream that offered limited sanctuaries from the rushing current. The first one, the sixteen incher, snatched the trailing salvation. The fifteen and fourteen inch giants, by small stream standards, slurped the pool toy. Landing these fighters in close quarters was quite a thrill. 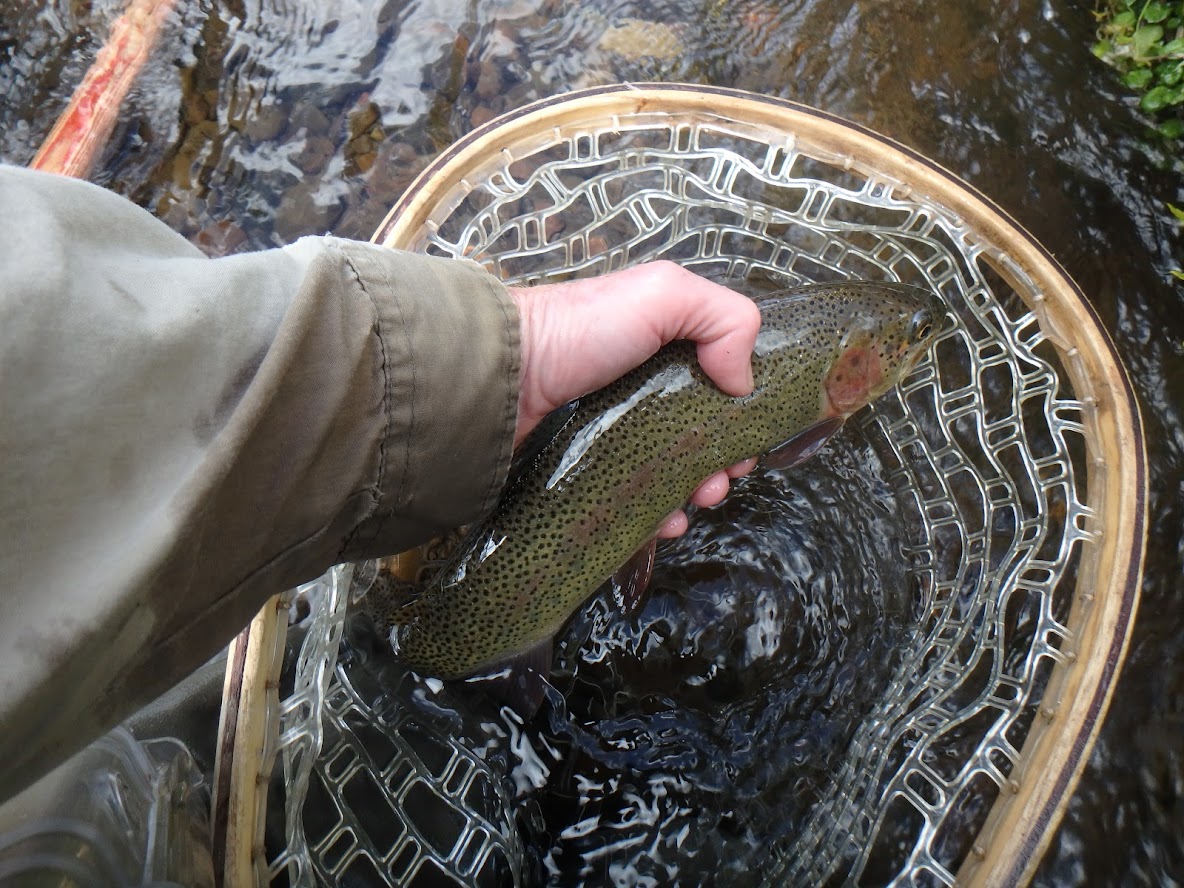 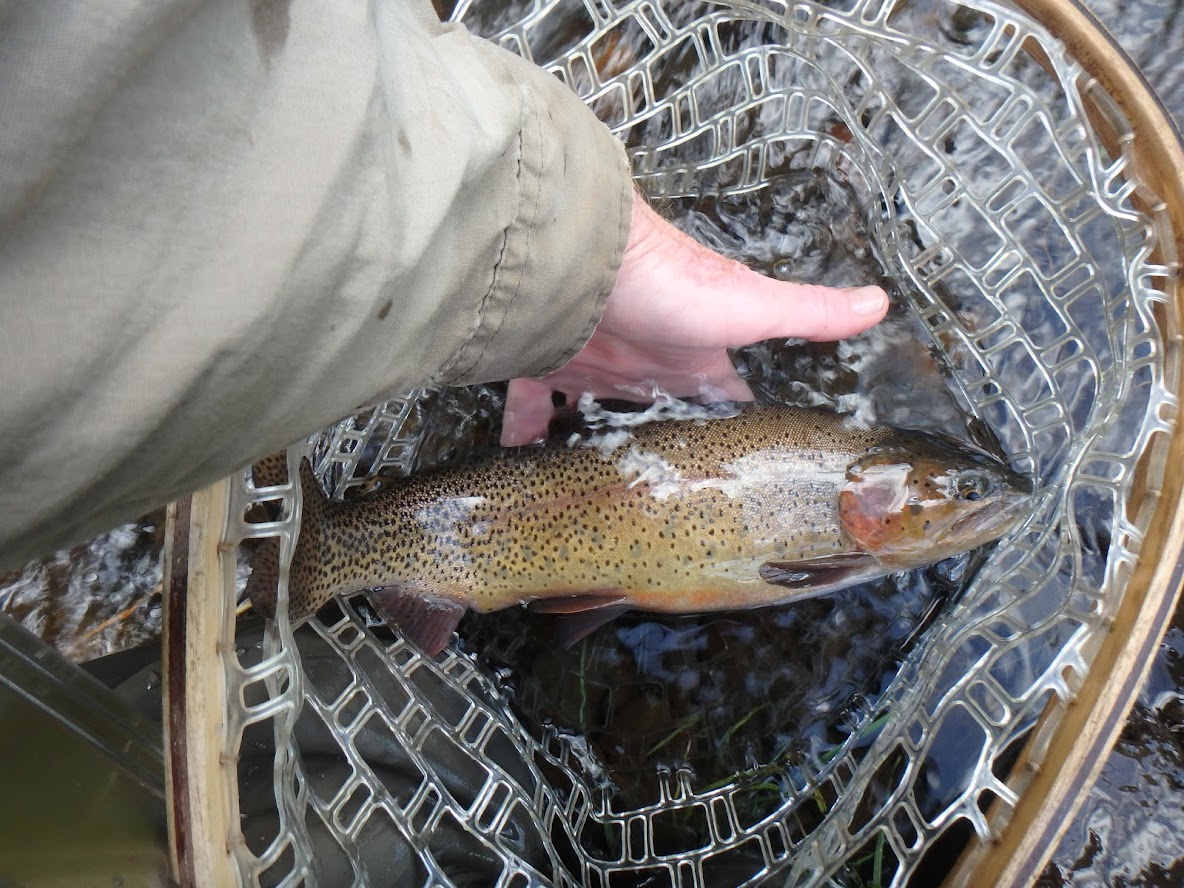 More Cutthroat Coloration on This One

The greatest challenge on the thirty-eight fish day was covering water. I prospected 1.1 mile of tumbling whitewater and skipped large segments of fast riffles and churning chutes and cascades. Finding locales where trout could feed without expending excess energy was the key to success, and this approach entailed skipping significant quantities of water. Wading against the stiff current or bashing through rough streamside vegetation were the toughest hurdles on Monday, September 16. 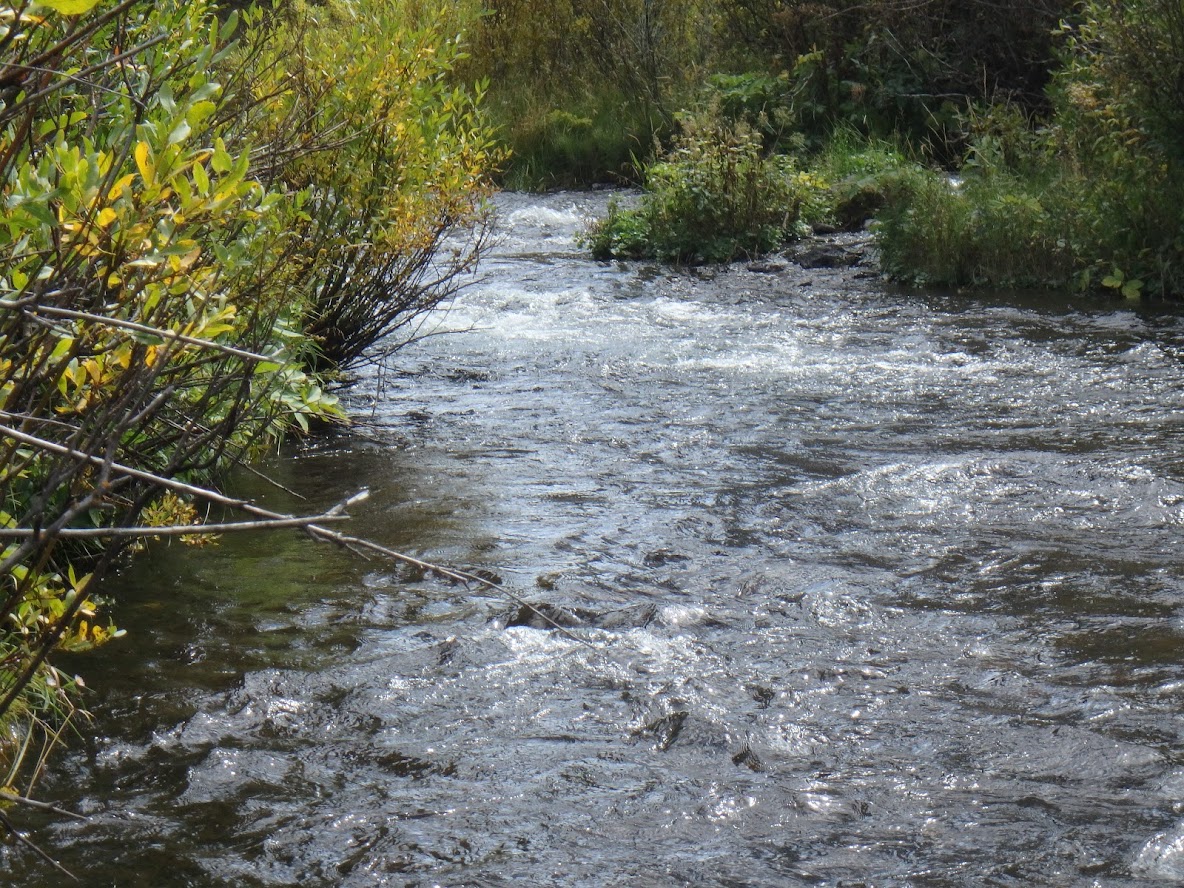 Love the Left Side

The fly fishing was spectacular, but the golden glow of the grasses and low shrubs against the blue sky and dark green evergreens was equally splendid. Marvine Creek requires a lot of effort, but the results make it worthwhile. 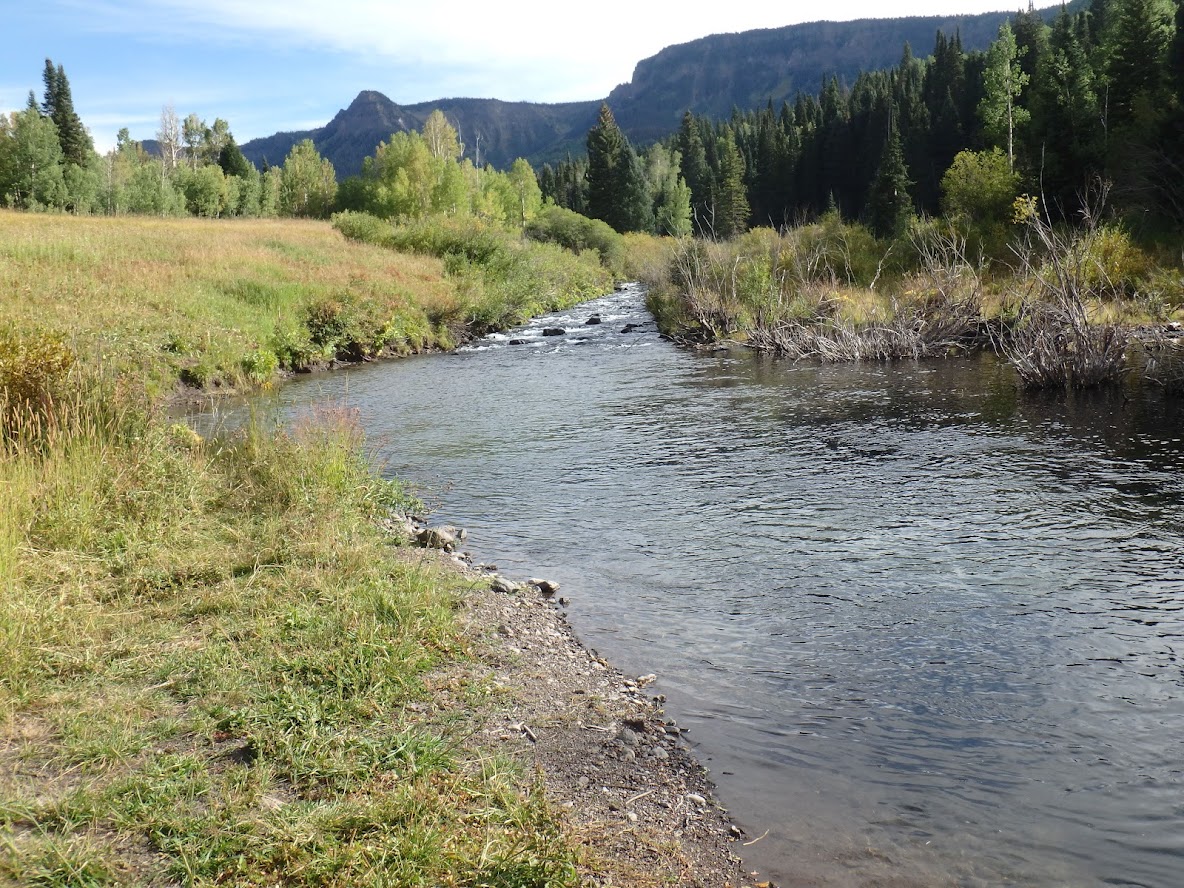 Head of the Beaver Pond