Fishing on Monday was more about spending time with my sister and revisiting favorite places from my childhood than catching fish. I got up with the Shafers and had a quick breadfast before they took off for work. I left the house at 8:15 and drove to my sister Marcia’s house near Landis Store, Pa. I elected to take a longer route than normal so I could check out the stream conditions of the NW Branch of the Perkiomen Creek near Forgedale, Pa.

Sure enough when I drove along the stream it was clear and slightly higher than usual, but definitely fishable. I continued on to Marcia’s and was greeted enthusiastically by her two dogs, Emma and Olivia. Marcia only works at a nursery on Tuesdays and Wednesdays, so we decided to drive to a favorite Pennsylvania Dutch market to buy a few items, and then continue on to Pleasantville for lunch and then drop by the Manatawny Creek to check conditions.

We executed this plan to perfection and purchased some ribs for dinner at a butcher shop next to the restaurant where we had lunch. Much to my amazement, the Manatawny Creek was essentially clear, but also somewhat higher than normal. We chanced upon two clumps of wild mint near the stream so we decided to return with our fishing rods and a pot to transplant some mint back to Marcia’s house. 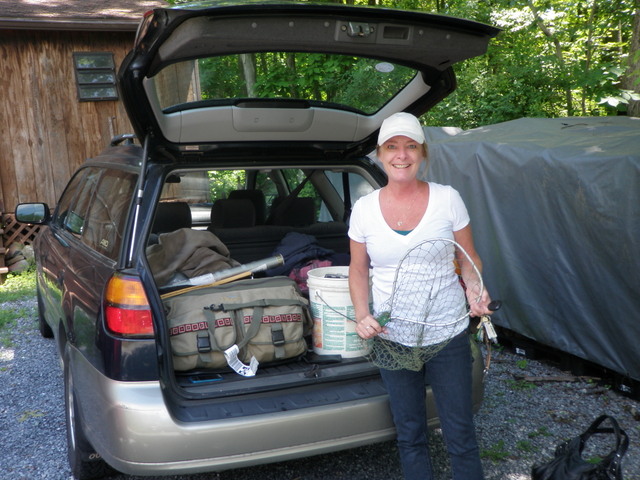 Marcia Gets Ready to Fish

By the time we drove back to Marcia’s house and loaded our fishing gear into Marcia’s second Outback fishing wagon and returned to the stream it was around 2PM. It was a pleasant day with temperatures only going to the low 70’s, so I was hopeful we might catch something in the middle of the afternoon. Marcia carried her five gallon bucket containing all her fishing needs to the bank directly across from a deep hole and began lobbing power bait. Almost instantly she snagged bottom below a large stump right above the deep hole, and I tried to wade in and dislodge, but it was quite jammed and I ended up breaking her line. 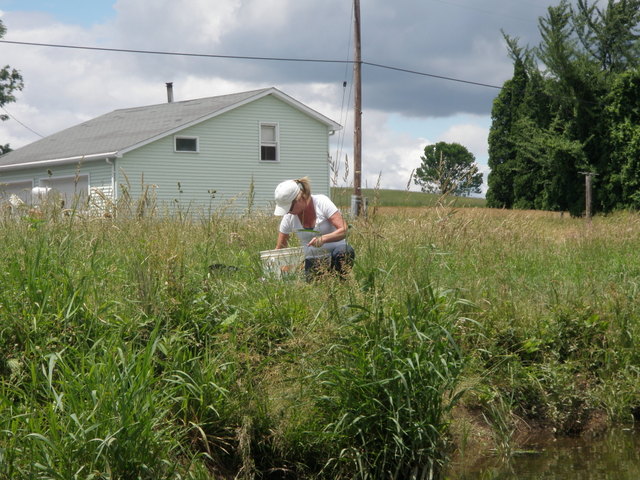 Retreiving Bait from the Bucket

I was impressed as I watched my sister tie on a new hook and bait her hook. Meanwhile I decided to walk downstream a bit and enter below and work my way back to her spot with flies. I tied on a Chernobyl ant and added a beadhead hares ear dropper. I worked my way upstream with no success and arrived downstream and across from my sister who had switched from power bait to a worm. She was allowing her worm to drift downstream along the bank and underneath some overhanging brush. Suddenly she exclaimed that she felt a bump and then another. Her worm was eaten so she added a fresh morsel and let it drift downstream again, and then she shouted, “I got one”. I looked on in anxious anticipation as she reeled in a 2.5 inch chub and then asked her to pose with her trophy. 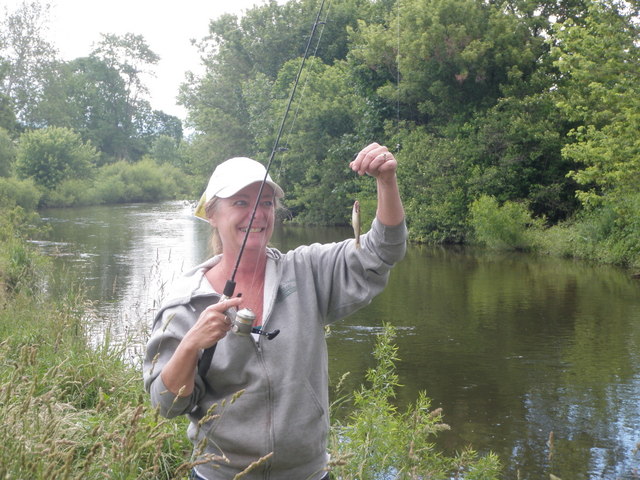 Marcia Proud of Her Catch

I covered the deep hole with my flies and as I did that, I spotted two or three rises forty yards upstream. I exited the stream below Marcia and walked her bank to the spot where I’d spotted a rising fish. I placed some nice long upstream casts in the vicinity of the rises and thought I saw a fish refuse the Chernobyl. I clipped off the large foam attractor and tied on a size 16 olive brown deer hair caddis and several casts later brought in a four inch silver chub.

I moved upstream a bit more to a place where a nice deep run ran along the left bank and under a large sycamore tree. This looked like nymph water and if there were any remaining stocker trout in the Manatawny they had to be here. I rigged up with nymphs and thoroughly covered the run, but no fish materialized, not even a chub. 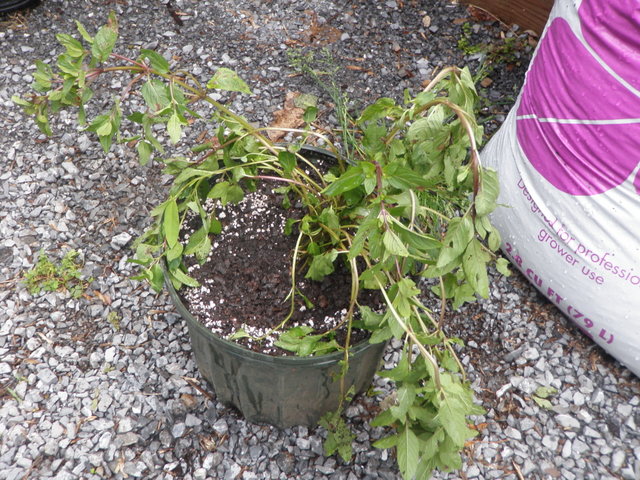 I returned to Marcia’s fishing hole and discovered her digging out some peppermint and fuzzy spearmint which she temporarily rooted in a pot for the drive home. When we got home she transplanted her “keepers” to nice pots and watered them. We laughed about our monster chubs and prepared a great dinner of barbecued ribs and a monster salad with fresh garden asparagus.