Location: Area where the river moves away from the road above Spruce Creek at a house and railroad overpass

Jeff and I slept in the Odyssey van on Thursday night at the Union County Rod and Gun Club again. We decided to take showers and were optimistic that we could fish Penns Creek by Sunday if not Saturday as the flows continued to gradually fall to the high 700 cfs range. Meanwhile we used our smart phones to track flows and conditions on other central Pennsylvania trout streams. The Little Juniata had fallen to the 300’s, slightly above average for this time of year. Unfortunately the TCO fly shop in State College listed the Little Juniata drainage as dirty, so that raised some concerns.

When I awoke I felt a definite change in the weather as the air was thick with humidity. The maintenance man at the club mentioned to Jeff that the weather forecasters were predicting two inches of rain. The woman at the small supermarket confirmed the forecast for heavy rain. We packed our gear, grabbed some breakfast and headed west to the Little Juniata River near Spruce Creek, Pa. under partly cloudy skies. The sun popped through off and on but there were also some large gray clouds in the sky.

We stopped at the Spruce Creek Outfitters to buy some supplies and get advice on what flies were working and then drove along the stream. The water was a bit high and an opaque milky green color, but it appeared fishable. We parked on the left side of the road opposite the stream and hiked up the road .3 miles to a path that cut down a bank behind a house. Jeff decided to work some eddies near the road while I elected to go under the railroad overpass and explore the series of four or five nice pools on the north side of the tracks. I began fishing with a beadhead hares ear and a prince nymph with a split shot and strike indicator, but this combination didn’t produce. After thoroughly fishing one pool I switched out the prince nymph for a beadhead pheasant tail. I used one that I’d found on a tree branch that was a bit larger than my others, and it had a flash strand from the tail to the hook eye.

At the top of the second pool along the inside of the current seam I foul hooked a 12 inch brown. Initially because of the lack of clarity of the water, I thought I had a monster, but once I brought it around to the edge of the stream I could see that the powerful fight resulted from being hooked in the dorsal fin. I moved up to the head of the next pool and snagged to the bottom and broke off the flashback pheasant tail. I selected the largest beadhead pheasant tail in my patch with a flashback wing case and tied it to the end of my line. Along the current seam at the top of this pool I hooked and landed a nice 13 inch brown and photographed it. In the same general area I landed a second eight inch brown on the pheasant tail. 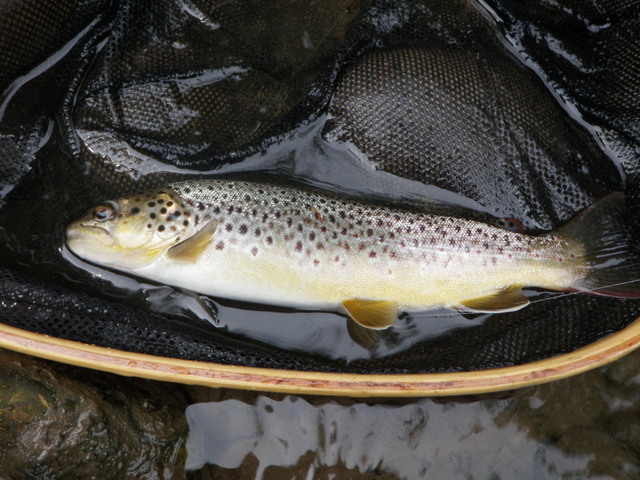 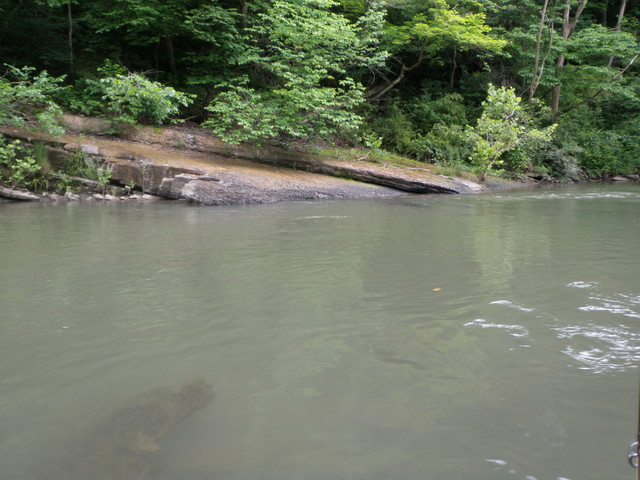 Location Where 16" Fish Was Taken

The next pool had a long flat ledge rock along the opposite bank with a large submerged rock partially visible in the cloudy water at the tail of the pool. I remembered this pool as the one I’d had good success on during my previous visit to the Little J when I landed several nice trout on a small CDC olive dry fly. I began prospecting the pool with drifts upstream and then fanned each succeeding cast outward until I had covered two thirds of the flow to the opposite bank. On perhaps the tenth drift as the flies began to swing at the tail of the pool in front of the submerged rock, the indicator darted sideways and I set the hook. I battled a nice fish and looked for signs that it wasn’t foul hooked. I was pleased to get a glimpse of the fish as it fought and clearly the line was coming from its mouth. 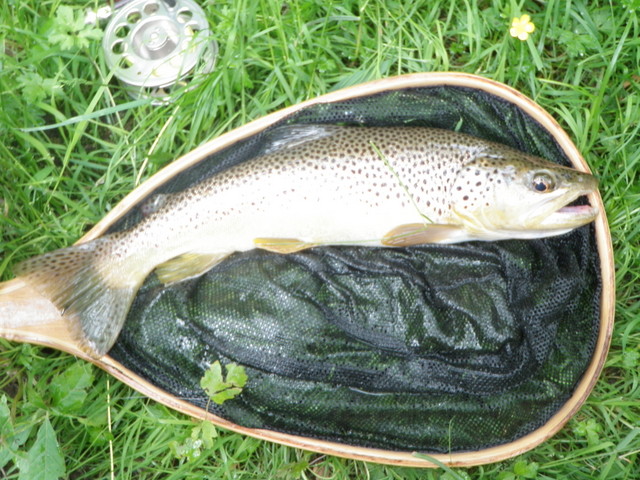 16" Brown from Little J Was Best of the Trip

I played the fish back and forth several times until I finally coaxed it into my net. The fish stretched an inch beyond the internal width of my net, which Jeff later measured at 15 inches, so my Little Juniata brown was a sixteen inch fish, and the largest of my Pennsylvania trip. I continued working up through the remaining pool, and Jeff arrived and circled above me to the tail of a long wide smooth pool below the next railroad bridge.

The river angled away from our bank over a shallow gravel bar and then dropped off to a deeper run where two currents met. I waded up along the bank to a point where I could wade out across the shallow riffles to fish the V above the junction of the currents. I had no luck in this area, but I was now positioned to fish two marginal areas along the north bank under some overhanging tree branches. In both these small runs of three to four feet in depth I landed small eight inch browns. 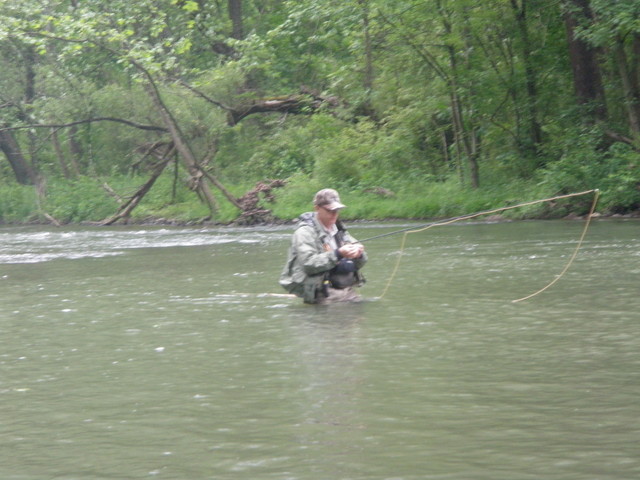 I continued working up along the north bank while Jeff cast from the middle toward the left side. In order to progress toward the bridge I waded through some very deep but slow water that approached the top of my waders. Just above the railroad bridge the river split into three branches that merged together under the bridge. I followed the right branch facing upstream under the bridge and then to the right. In a nice deep run here I foul hooked a ten inch brown. I was attempting to find a path up to the railroad bed so I could use the bridge to cross, but it became evident that I would have to hike quite a distance north through some dense vegetation to reach a point where the bank was short enough to gain the railroad tracks. In addition the trains were quite active, and I was concerned about being on the bridge when a train approached. 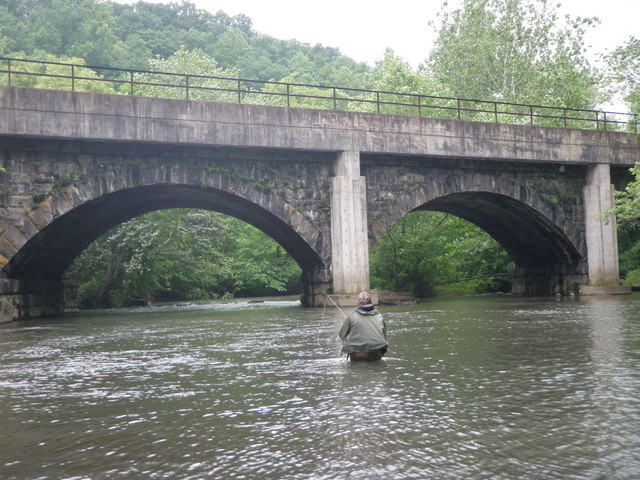 I did a U turn and waded back downstream a bit, then cut up to the woods and worked my way through some dense vegetation to avoid the deep wading challenge. By this time the sky was clouding up, and I could feel light drizzle or mist occasionally. It took a while but I ended up going back in the edge of the river and wading downstream to an open area across from the large pool where someone had built a bench and a rope swing. Jeff was waiting near this point and began fishing again. I elected to continue retracing my steps to the series of pools. I stopped at the productive ledge rock pool where I’d landed the 16 inch fish and gave it another shot. I fished the pool half heartedly for a bit, and then clipped my fly to the guide and went downstream in search of Jeff who had gone back to the eddies and pockets near the road.

I stopped briefly at the long riffle just above the first railroad bridge and spotted two random rises. Upon seeing these, I removed my nymphs and tied on Jeff’s parachute sulfur. It was a welcome transition to change from slinging nymphs to casting a visible dry fly, but the fish weren’t cooperative with my change in approach.

After fifteen minutes or so, I reeled in my line and continued downstream in search of Jeff. I found him near the point where the river moves away from the road, and we walked back to the car together and ate our snacks for dinner. We debated where we wanted to fish for the evening hatch. Jeff suggested the nice pool across from the parking lot, but I was inclined to return to the long riffle above the bridge where I’d seen a couple rises. I changed from my sunglasses to regular glasses, put on my headlamp, and added a layer beneath my raincoat.

We once again walked up the road to the same path down the bank and Jeff jumped into some sweet runs above the eddy. I continued back to the long riffle and once again began to notice sporadic rises. I drifted the sulfur over the rises to no avail so I decided to look closely at the water. I spotted quite a few small mayflies and was able to seine one using my net. When I inspected closely I observed a size 18 or 20 mayfly with a black body and smokey gray wings with a tinge of tan. I tied on one of my CDC olives and covered the water, but my hatch matching didn’t bring any success.

I decided to go back upstream to the series of pools and look for rising fish. As I waited and watched the water, Eric Stroup, a local guide and expert on the Little Juniata came downstream with two clients. I asked him what we might expect for an evening hatch, and he told me the sulfurs were over and the only thing that might happen would be a cornuta spinner fall. He gave me one of his cornuta spinners and I showed him one of four I had in my box with a dark olive brown body. He told me this would probably work as well. I mentioned the black body mayflies I’d discovered earlier, and he identified them as paraleptophlebia, and he said they don’t seem to bring fish to the surface.

After unsuccessfully fishing a couple of the pools, and seeing no rising fish, I decided to return and check in with Jeff. When I reached him there was a dark cloud in the northwest sky, and we could hear thunder, so we decided to walk back to the car. While doing this the wind kicked up and the leaves turned inside out and we could hear the rain hitting the leaves to the west. The rain reached us and we pulled up our hoods to avoid getting wet over the last fifty yards of our return.

We quickly got out of our waders and tried to keep the car as dry as possible but it was difficult and the rain intensified and ran off the tailgate. Once we got in the car we debated what to do next. We were out of cell range so we couldn’t look at any weather radar sites nor could we check stream flows. I’d spotted the Spruce Creek Tavern as we drove through town, so we decided to stop there and check it out for dinner. The casual restaurant was quite crowded, but we were promised a 15 minute wait so we decided to stay and have a warm meal.

After dinner we checked out the Marshall House B&B where we’d stayed on our last trip, but there was a For Sale sign and no one answered the doorbell when Jeff rang. We continued east on route 45 toward State College and the skies opened with steady rain pelting the minivan. When we got closer to State College where we could get a cell signal, we checked the radar and saw several bands of heavy rain north and south moving across Pennsylvania. The USGS streamflow graphs were showing vertical lines for Penns Creek and the streams in the area, so we decided to leave central Pa. and return to Whitehall where dry beds awaited us. It was a good decision as Jeff drove through waves of heavy rain on interstate 80. We arrived back at Jeff’s house at 1AM and crashed into our beds.