Wednesday, September 1, 2021 was a very memorable day. What a way to kick off the month of September! September is usually my most productive month of fishing, and if Wednesday’s adventure is indicative, 2021 may be no different. When I decided to visit this high mountain stream, I checked back on this blog and read my reports from 07/29/2020 and 08/27/2019. I considered the 08/27/2019 post more relevant, since it took place within five days of Wednesday’s visit. I utilized some of the same flies that served me well on the previous two trips, and they yielded fantastic results.

I arrived at the parking lot across from the trailhead by 10:15AM, and after I pulled on my waders and assembled my Orvis Access four weight, I departed on a 1.5 mile hike to reach my intended destination. My two major concerns were the level of the water after a below average snow pack and the threat of rain in the afternoon. The air temperature was around 70 degrees, as I prepared to fish, but I elected to wear waders in case the cloud cover and rain created a chill. This proved to be a wise decision, as heavy clouds rolled into the area after lunch, and steady rain became a reality for the last hour on the creek. Of course the 1.5 mile hike generated a fair amount of perspiration, but when the chill arrived, I was pleased to have the extra layer. 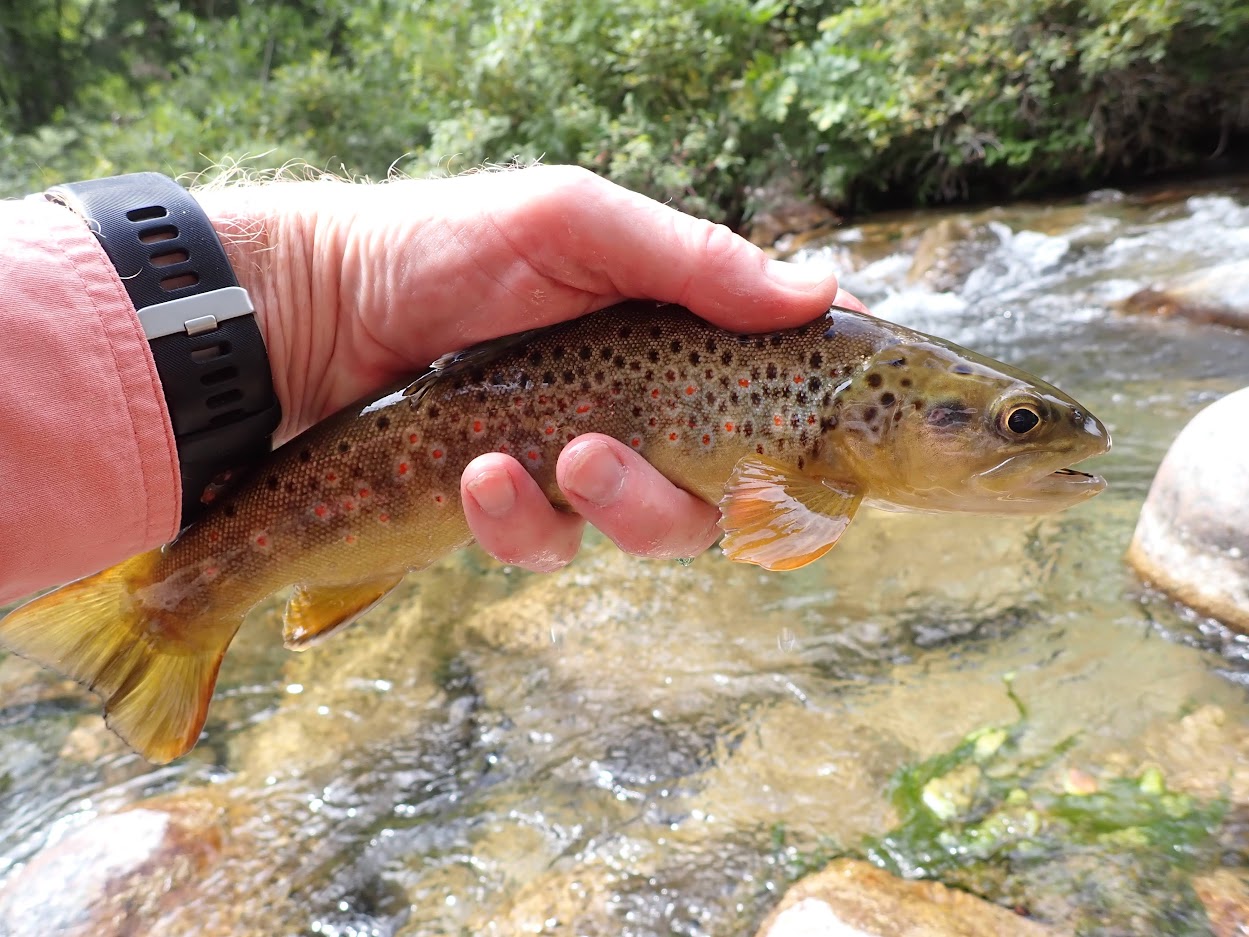 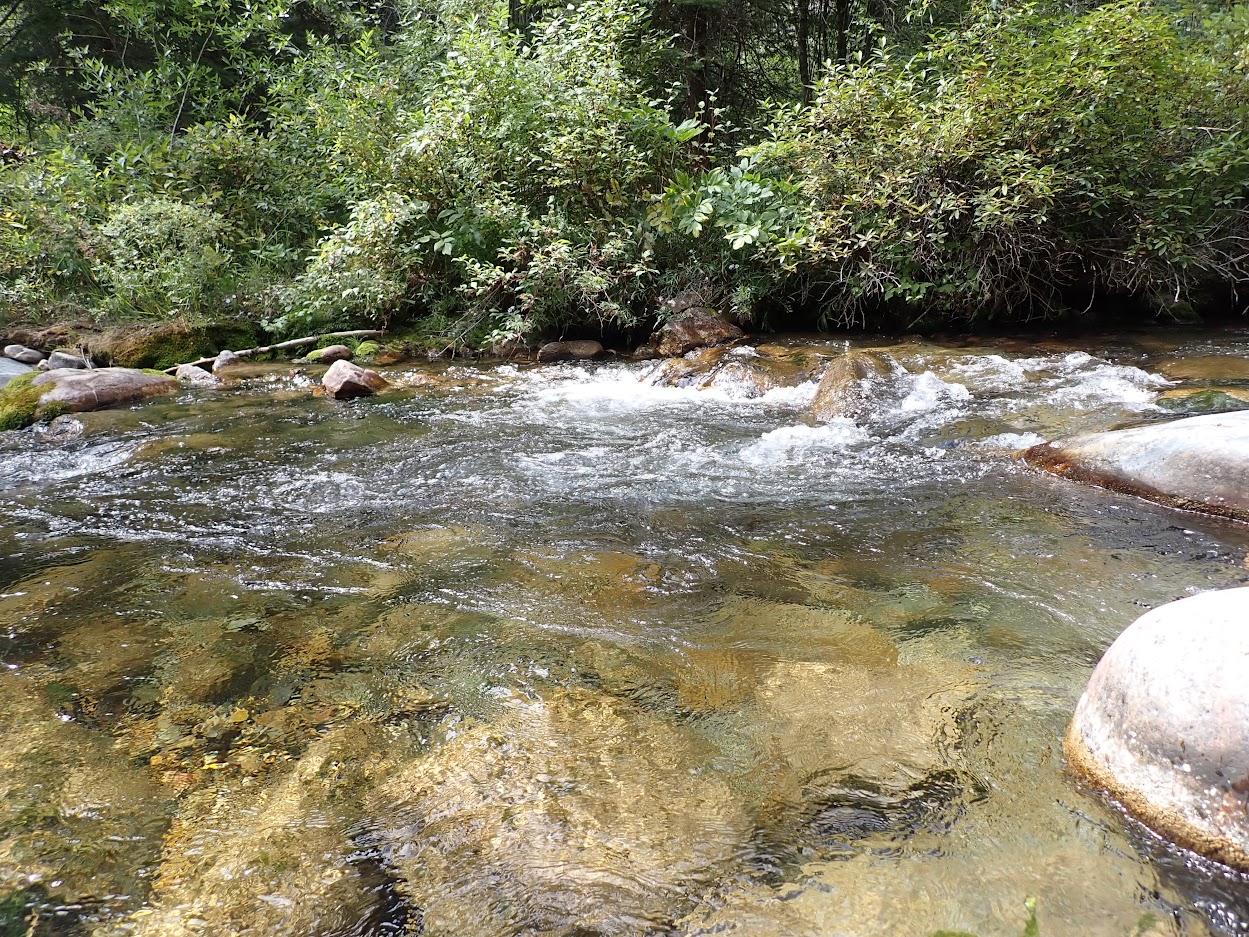 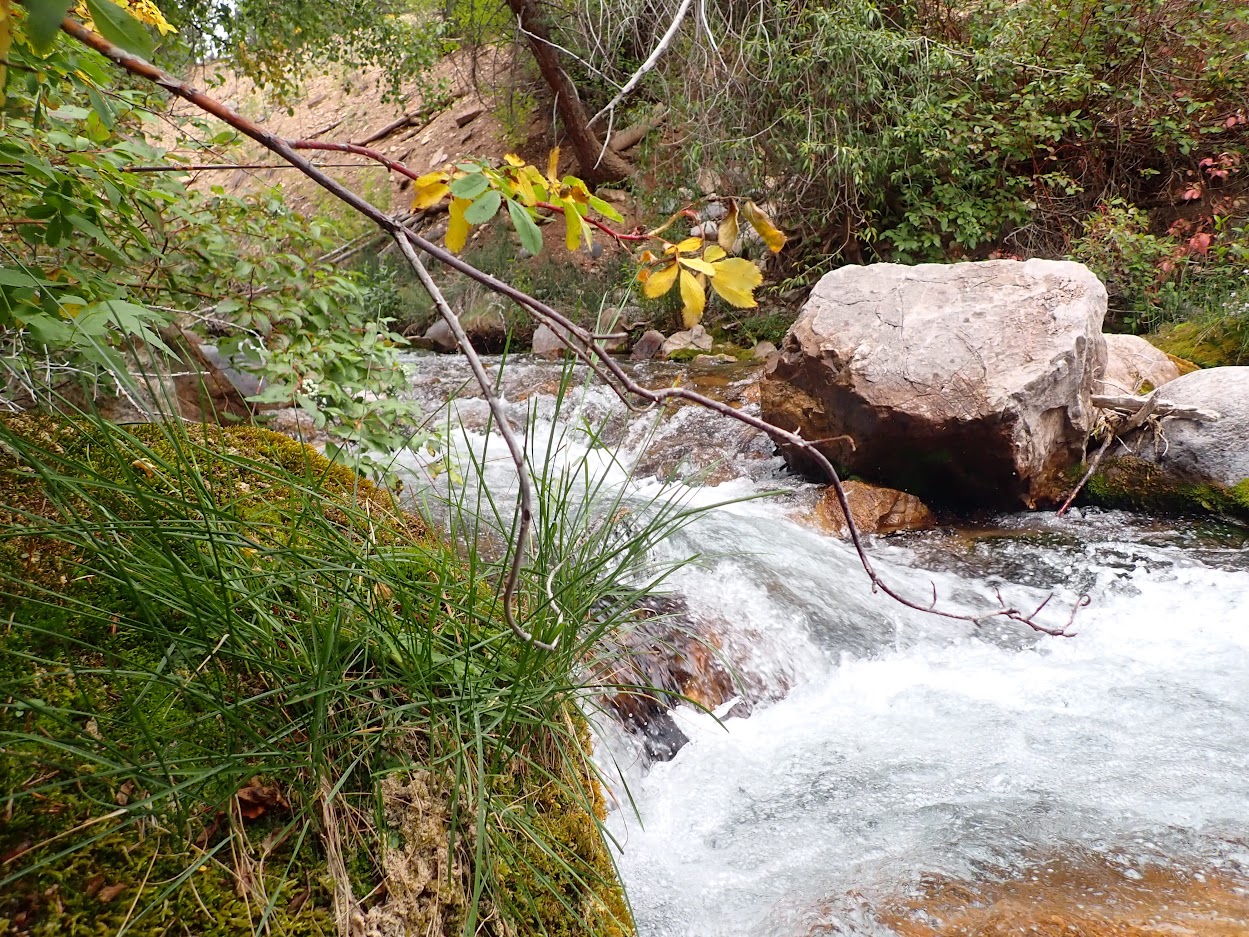 I began with an ice dub olive hippie stomper solo and landed a couple decent brown trout in the first twenty minutes, but the number of refusals to the small foam attractor far surpassed the number of eats. In a narrow slow moving side pool, a large mouth rose above the creek surface, but it turned away at the last second to avoid the hippie stomper. I was tantalized by the wide open jaw, so I invested extra time to add a parachute green drake to the hippie stomper on a twelve inch dropper. The time spent was well worth it. On the first cast a twelve inch brown trout snatched the trailing green drake. Normally after a fish refuses a fly, it is futile to cast for it again, but the image of the large open mouth caused me to eschew the conventional wisdom. I carefully sopped up the excess water from the green drake, dropped it in my dry shake canister, and applied a fresh coat of floatant. I lobbed the double dry to the small eddy fifteen feet to my right, and as the flies began to accelerate toward the downstream border of the pool, something grabbed the trailing parachute. I felt heavier than normal weight, and I was shocked when I caught a glimpse of the sixteen inch brown trout attached to my leader. I carefully applied pressure and relaxed the tension, as the small stream behemoth dove and executed several classic brown trout head shakes. I was beyond ecstatic, when I slid my old net beneath the creek monster. Wow! 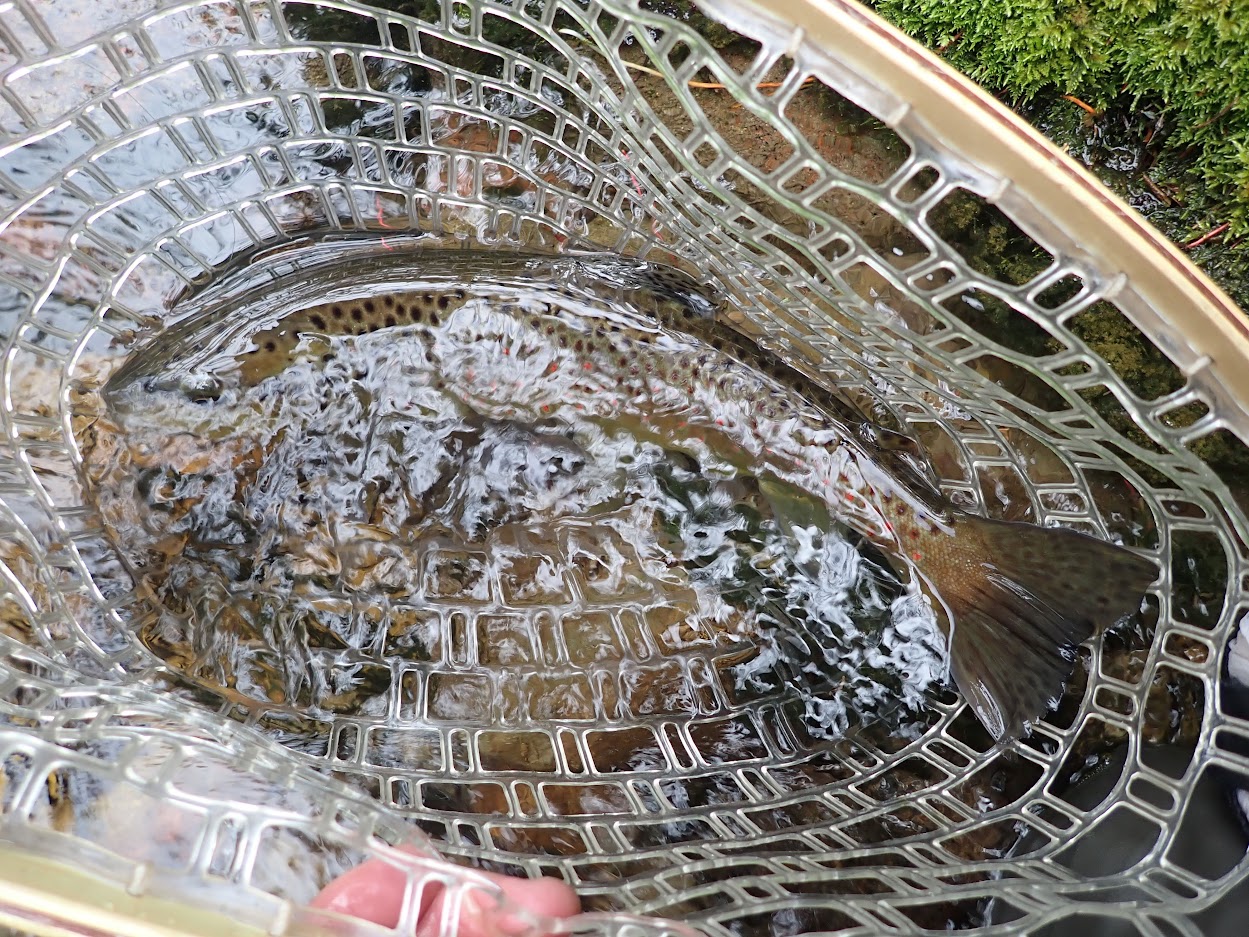 With the Contour of the Net 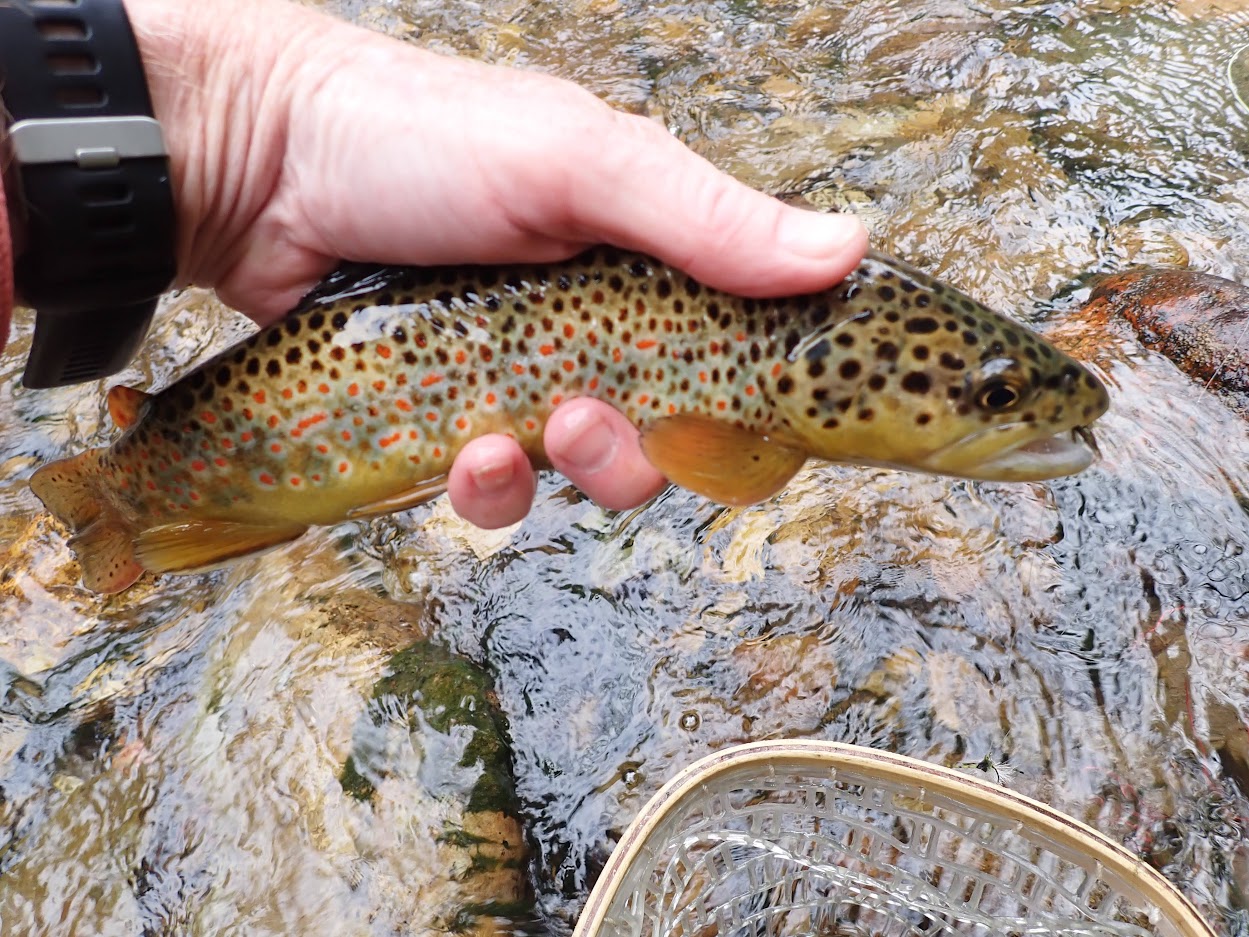 I stayed with the double dry until three o’clock, when I shifted to a size 8 tan pool toy hopper and trailed a salvation nymph. The olive hippie stomper and parachute green drake enabled me to boost the fish count from two to twenty-eight, before I made the change to the dry/dropper. I estimate that 60% of the landed trout slurped the green drake, and the remaining 40% crushed the hippie stomper. I reveled in the aggressive attacks, as nearly every viable trout holding location yielded a fish or two. Some of the primary holes with above normal depth produced three or four feeding inhabitants. All the netted trout on Wednesday were brown trout, and many displayed deep buttery sides and bellies sprinkled with ink black spots and a line of orange spots along the side. These were wild fish in both appearance and fighting spirit. A large proportion of the landed fish measured in the eleven to twelve inch range with the sixteen inch outlier and another fourteen inch beast thrown into the mix. I’m certain that a few thirteen inch browns also graced my net. The average size of the trout on Wednesday easily surpassed the brook trout jewels from Big Blue Creek, and they were a notch above the netted population from South Boulder Creek. 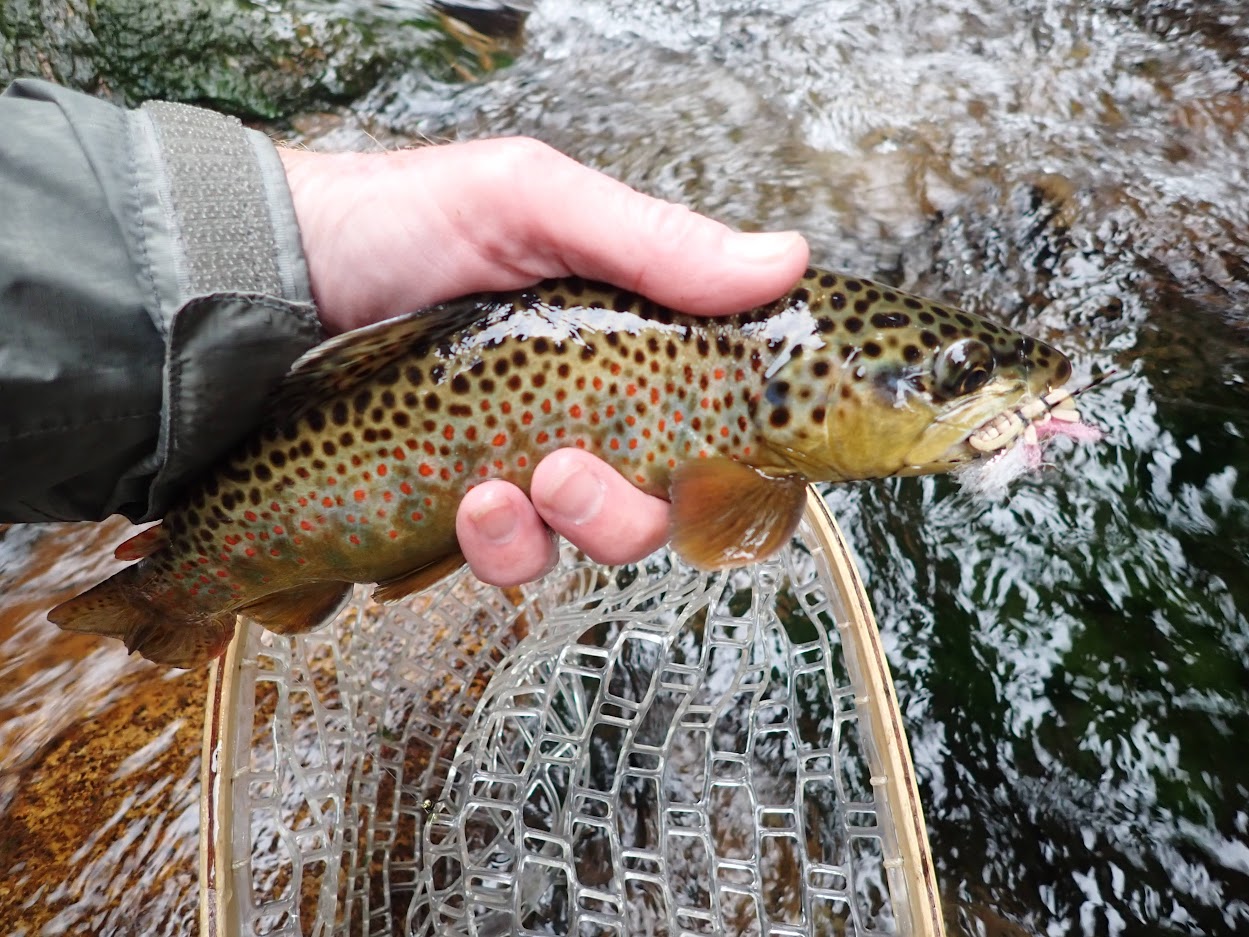 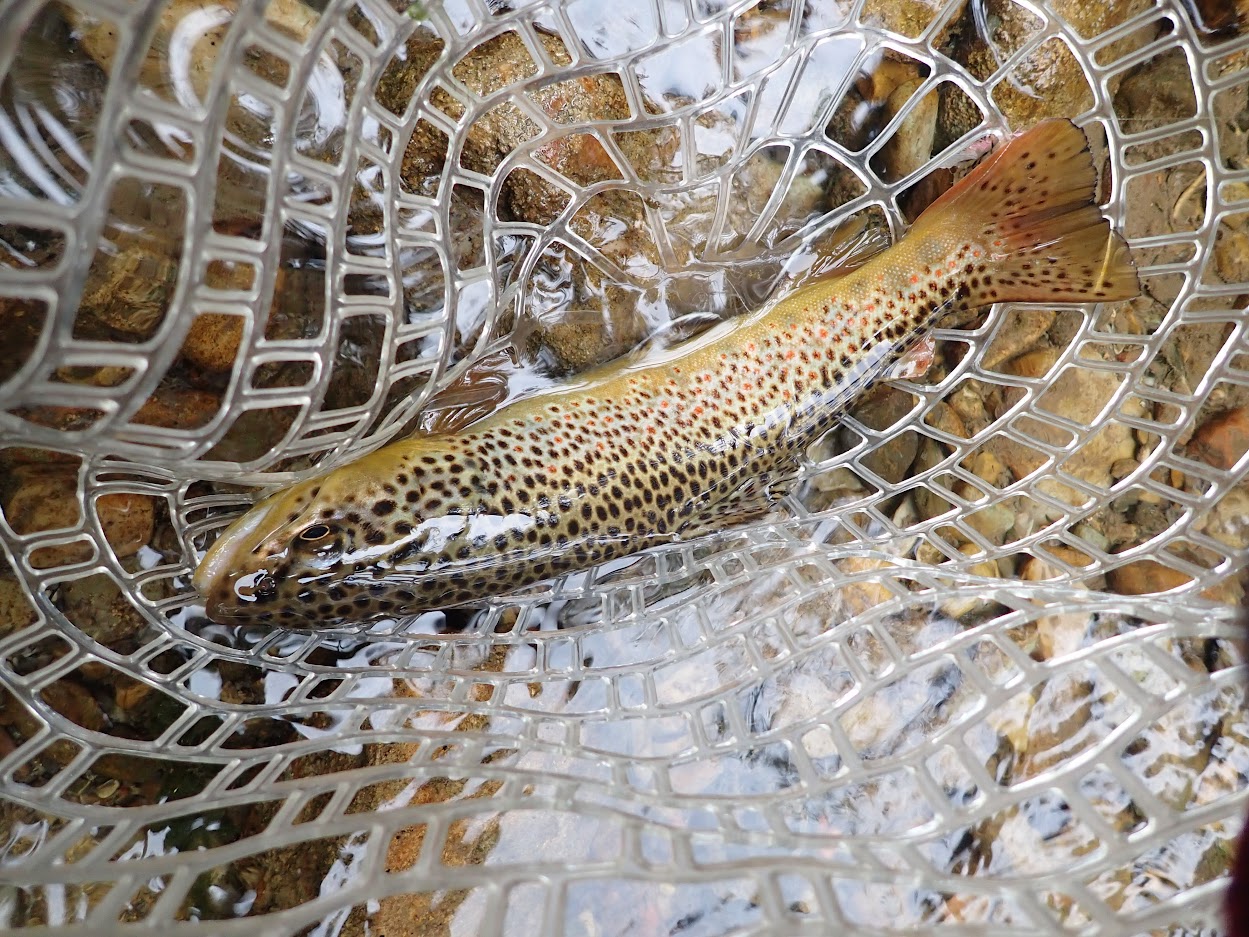 By 3PM the heavy clouds overhead delivered steady rain, but I was so consumed by my search for trout that I ignored the weather and continued my upstream migration. It was at this time that I was stuck at twenty-eight trout, and I decided to shift gears to a dry/dropper approach. I attached a size 8 tan pool toy hopper and then added a salvation nymph on a 2.5 foot dropper. The catch rate slowed a bit, but I managed to increment the fish count from twenty-eight to thirty-four over the last hour, as the rain intensified. Two of the final six grabbed the salvation, and the remainder crushed the hopper. Several of the final six fish were very decent catches in the twelve and thirteen inch range. 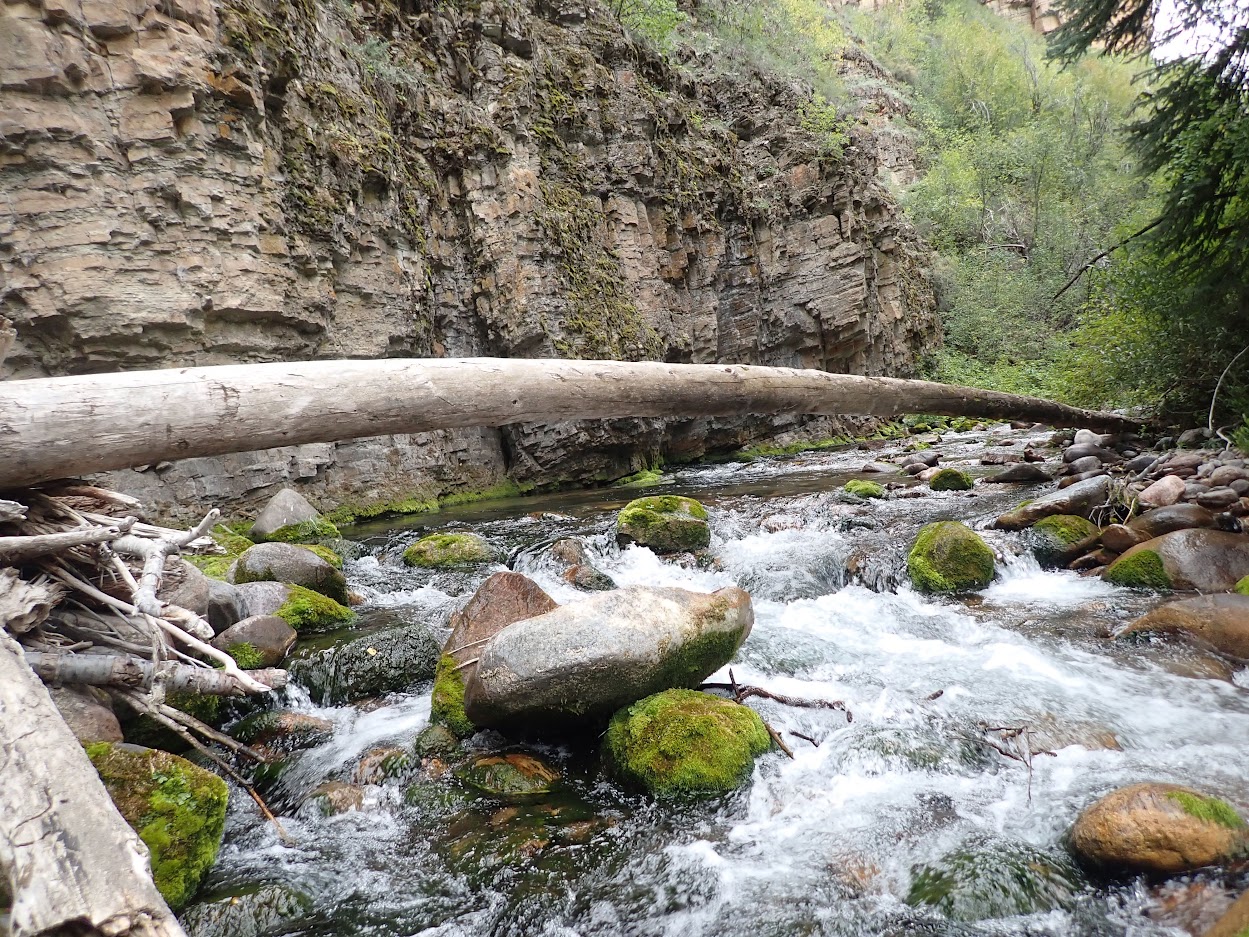 As I write this report, I am still feeling the euphoria of a grand outing on September 1, 2021. Thirty-four wild brown trout of above average size in a small stream setting is really hard to believe. The hike was a challenge, and the rain was a nuisance, but the effort and persistence were rewarded with a fabulous day of fishing on a high elevation creek in Colorado.