I began my hike to another high country stream never before fished at a trailhead that displayed a sign. I knew from my review of the topographical map that a trail followed the creek, and I assumed that the marker identified its starting point. After .4 mile, however, I encountered an extremely steep ascent on loose soil, so I backed up and retreated to the stream. Normally I favor hiking much farther from a trailhead, but my lack of familiarity with the area and my concern for safety dictated, that I violate the distance from parking lot doctrine. 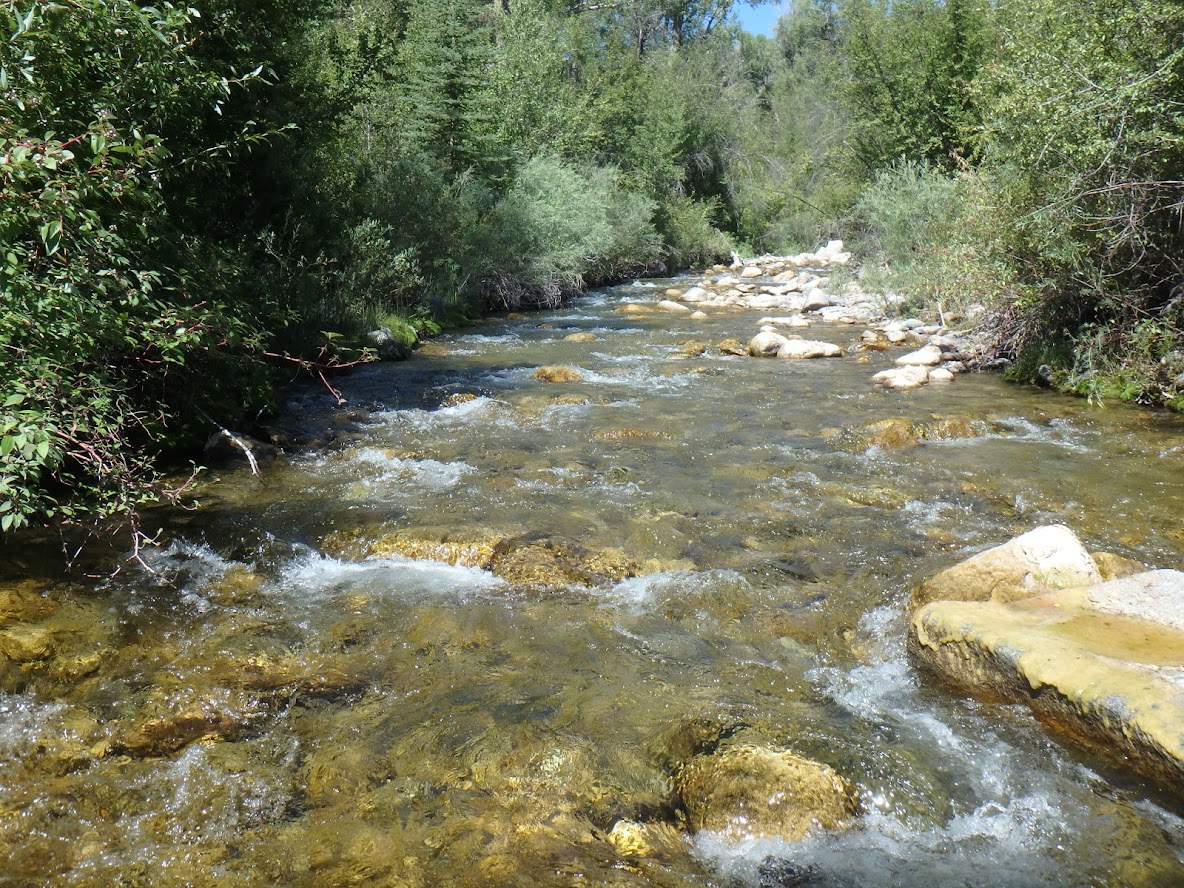 I cycled through more than the normal number of flies during my day on the new stream, as I was unable to reach a combination that yielded confidence. For the surface component of my dry/dropper systems I experimented with a tan pool toy hopper and peacock hippie stomper. When I elected the solo dry fly approach, I tested a parachute green drake, Jake’s gulp beetle, and a user friendly green drake. For dropper nymphs I turned to the salvation nymph, beadhead hares ear, bright green go2 caddis pupa, ultra zug bug, and prince nymph. By far the most effective dry was the pool toy, and it was featured on my line on three separate occasions. The salvation duped a couple fish early as did the go2 caddis pupa. The prince produced a very memorable twelve inch brown trout that was tucked tight to an exposed boulder. The ultra zug bug yielded four trout during the afternoon when combined with the hopper. 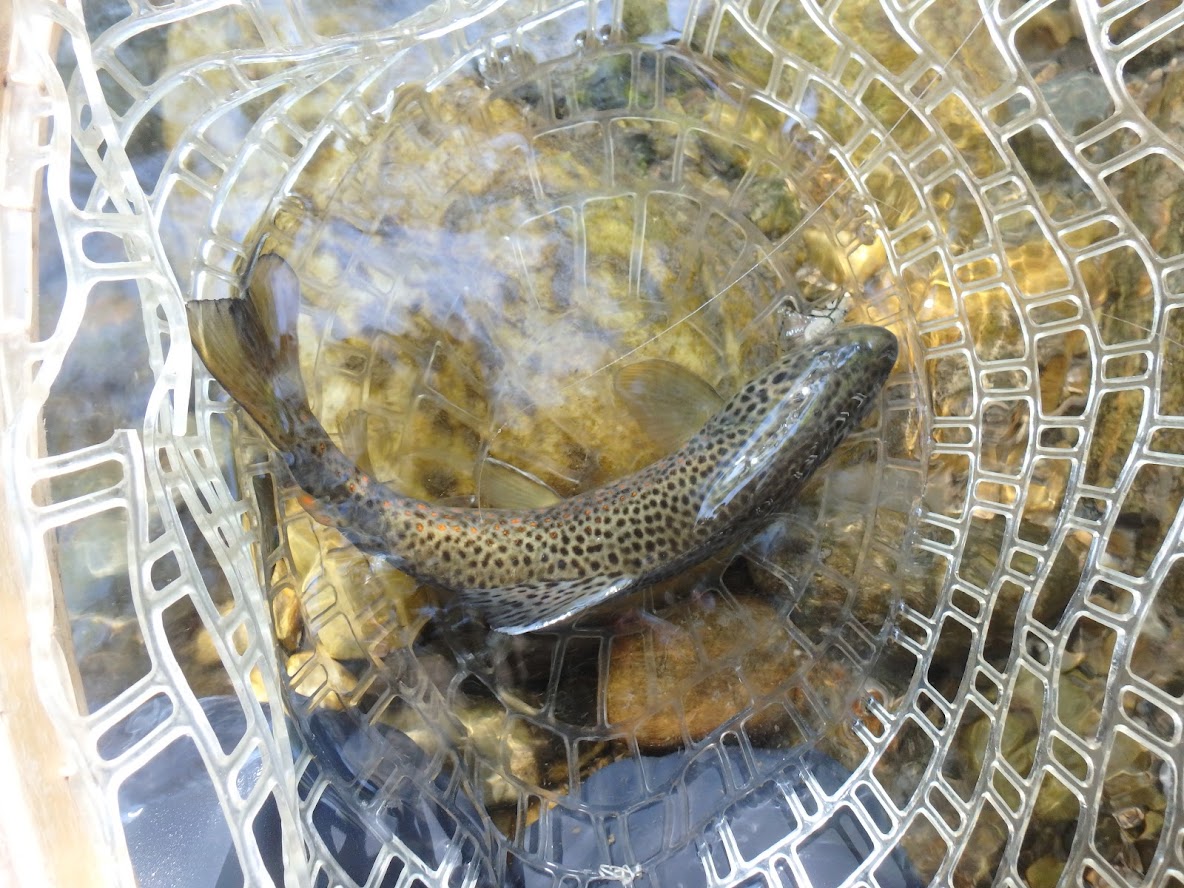 Between 10AM and noon the fish count mounted to eleven, and at that point I broke for lunch. Most of the morning trout crushed the hopper or nabbed the salvation or go2 caddis pupa. The action was steady, but I moved at a fairly fast pace and only allocated three casts to most locations. For the most part the willing eaters emerged from expected locations that provided depth near cover. 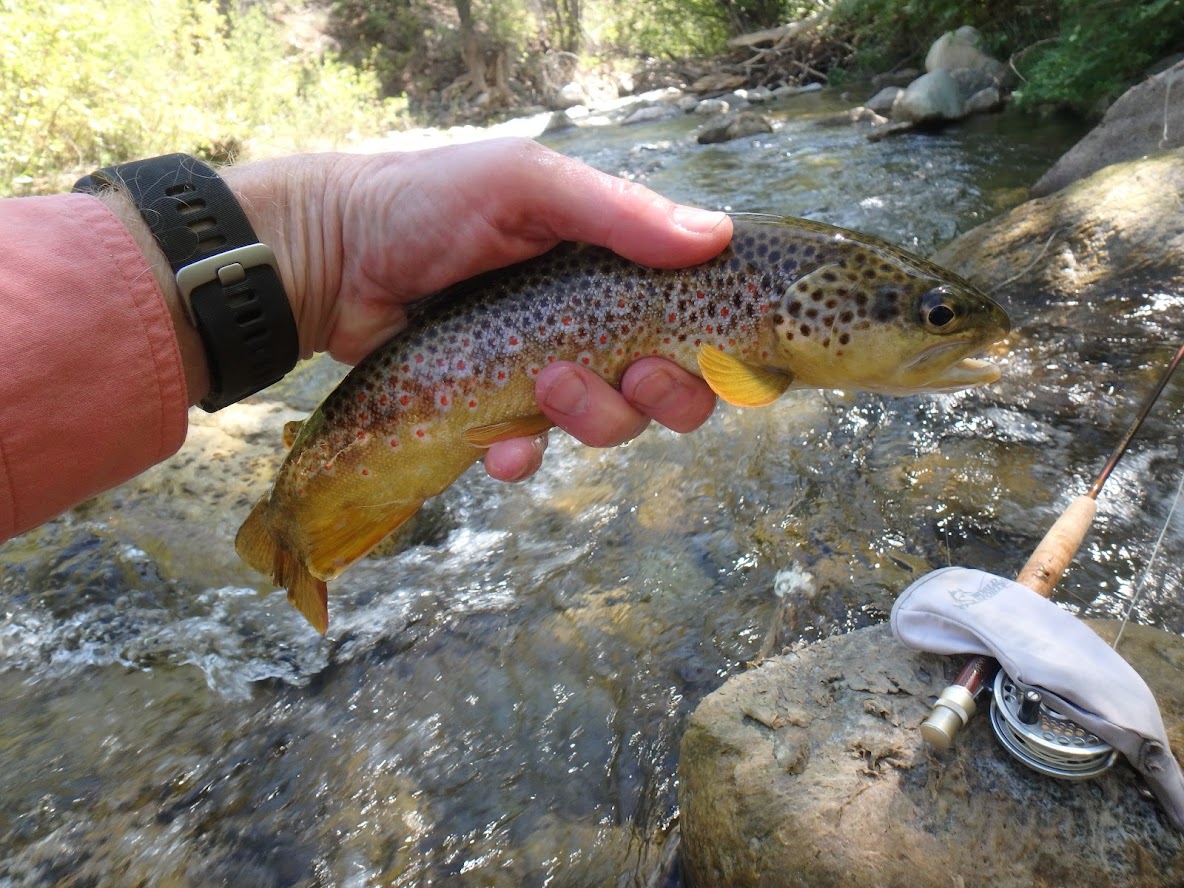 After lunch I experimented with the hippie stomper. Although the hopper delivered fairly regular results, it also initiated a decent number of refusals. The hippie stomper performed well on my previous three stream visits, so I wanted to assure myself that I was not overlooking a very productive fly. After twenty minutes as the top fly with a prince nymph as a dropper, the stomper accounted for three fish, but it was not on fire, nor did it outperform the pool toy. 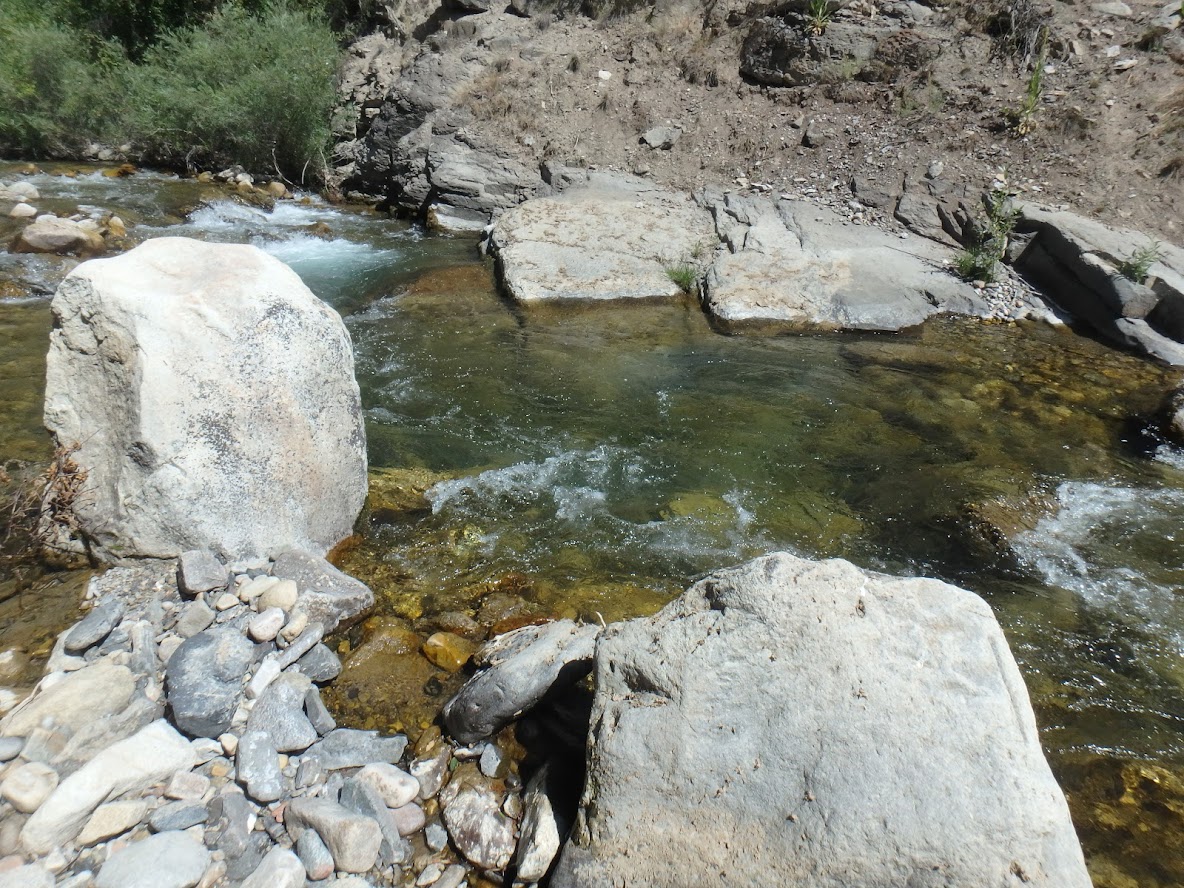 I revisited the hopper for improved buoyancy and visibility, and it proved its worth. The prince meanwhile produced a gorgeous brown, but then it ceased to contribute, so I replaced it with an ultra zug bug. By 2PM the sun was high overhead, and its impact raised the temperature to the mid-80’s. It seemed that the fish took siestas, as I suffered through my longest dry spell.

My confidence was ebbing, as the fish count stalled at eighteen, so I decided to try some alternative dry flies. I speculated that something smaller might be more in favor. I began with a Jake’s gulp beetle, and it produced a small brown in a marginal spot along the edge, but some drifts through quality runs failed to produce, so I made another change. I opted for an olive size 14 stimulator, and it also contributed a couple fish, but it faltered in some prime spots and got waterlogged. 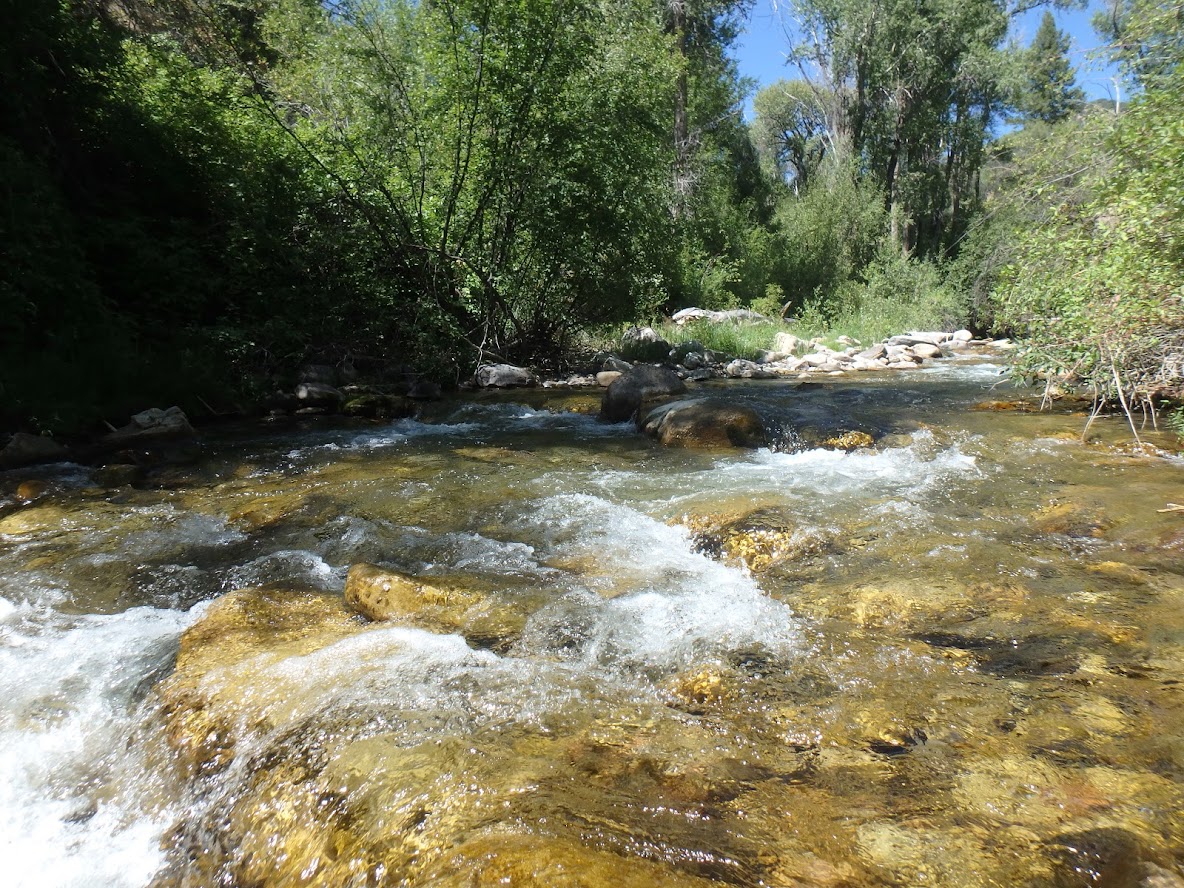 It was at this time, that I observed a solitary green drake, as it slowly fluttered up from the creek. Since I was in a slow period, I had nothing to lose and knotted a parachute green drake to my line. Voila! The fish liked my move, and four additional trout found a home in my net. The parachute also sopped up water; and, in fact, the last fish gulped the mayfly imitation after it sank. I decided to try a user friendly green drake, since it possessed a foam strip for buoyancy, and it added a small brown, but then a small wave of refusals ensued. I stuck with the green drake theme a bit longer, and switched back to a fresh parachute, but suddenly the trout were not interested in the large olive mayflies. 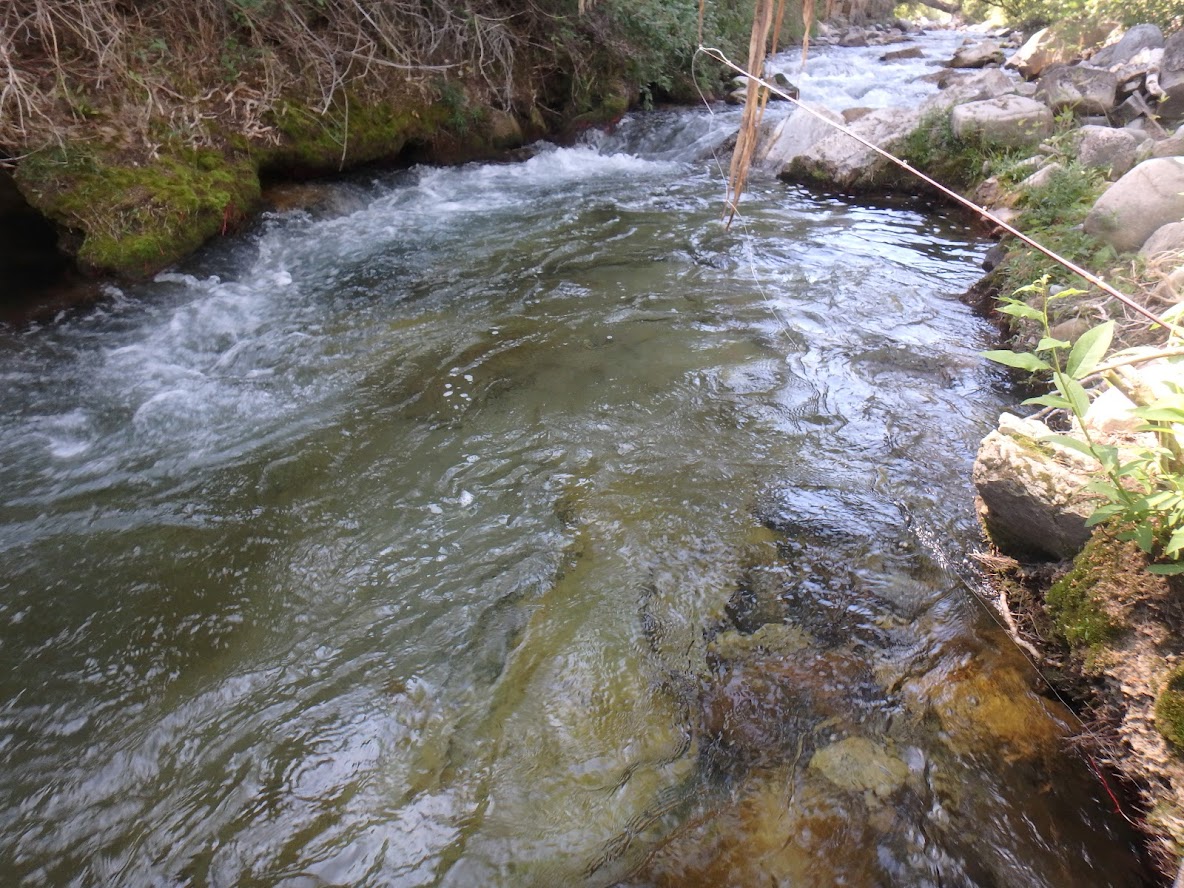 Let Me At It

For a third time I elected to drift the pool toy hopper, and the ultra zug bug was my choice as the dropper. I approached a very deep triangular pocket in front of an exposed boulder and dropped three casts in the center. All were ignored but not the fourth. No sooner had the hopper splashed down, when a missile of a trout exploded on the foam terrestrial. I set the hook and immediately realized that the object attached to my fly was the best fish of the day. It raced back and forth, but fortunately never left the small pool, and after some tense moments I lifted its head into my net. There before me rested a fifteen inch cutbow that possessed ample weight. This was number twenty-five and a fitting exclamation point on a fine day of fishing. 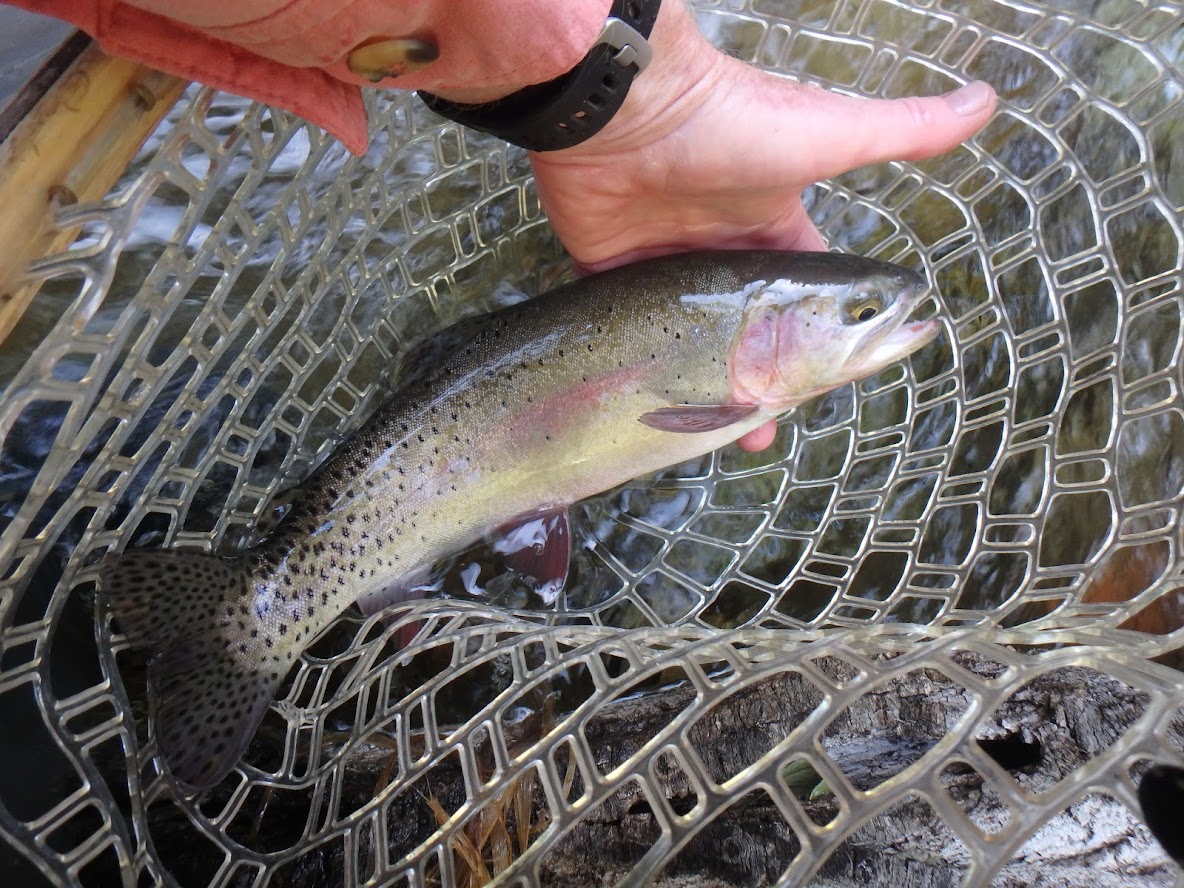 Only Fish That Was Not a Brown

I managed one more medium size brown, and then my watch displayed 3:30PM, and I was unsure of my exit strategy. Finding a way out of remote fishing locations has become a repetitive theme on my backcountry adventures. I angled up a relatively steep but short bank that consisted of loose soil. When I arrived at the top, I proceeded at a ninety degree angle from the stream through some spaced trees and brush, until I arrived at a clearing. Miraculously I spotted a defined trail, and I followed it for .8 mile through pinon pine, juniper and sagebrush vegetation, until I met the creek just below the road. The trailhead was unmarked and fifteen yards below the sign, where I began my morning hike. 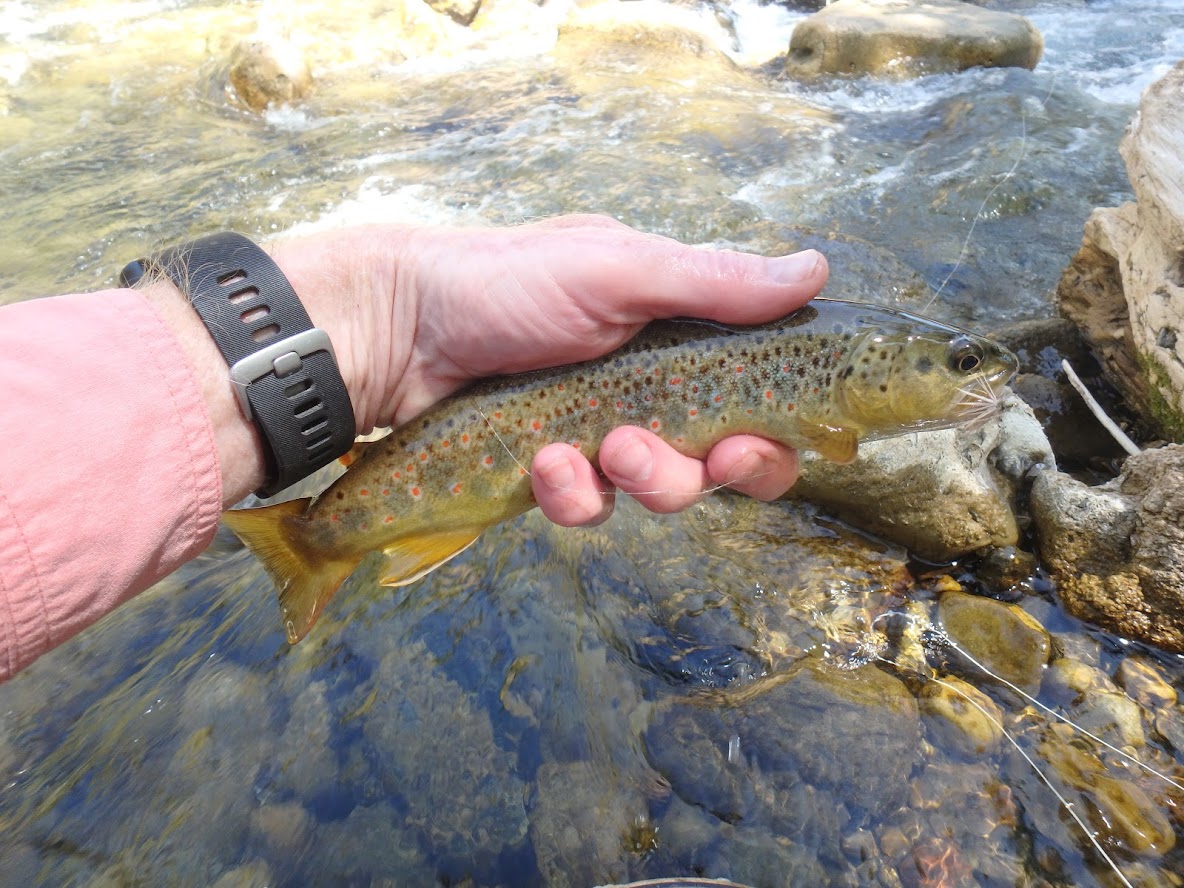 The fisherman trail involved a stream crossing, but I now know where to embark on my next visit to Lake Creek in order to gain deeper penetration into the backcountry. I landed twenty-six trout on Tuesday, and all except the cutbow were brown trout. The brown tally included a pair of fat thirteen inchers, four twelve inch beauties, and the remainder were in the eight to eleven inch range. I felt like the fish density lagged other comparable small streams; but this may have been influenced by the sunny hot day, the more wary nature of brown trout, and my failure to hike deeper and away from an area that probably receives heavier fishing pressure. Now that I know the path logistics, I am anxious to give the newly discovered creek another try.