July 2020 has been hotter and drier than normal, and these conditions caused me to advance my fishing destination selection to tailwaters and high altitude mountain creeks earlier than usual. This process began with my fishing and camping trip to the Taylor River last week. On Wednesday, July 29 I continued my pursuit of hot weather trout with a trip to a crystal clear back country stream. I began my 1.1 mile hike at 9:30, and this enabled me to begin my fly fishing adventure by 10:00AM. 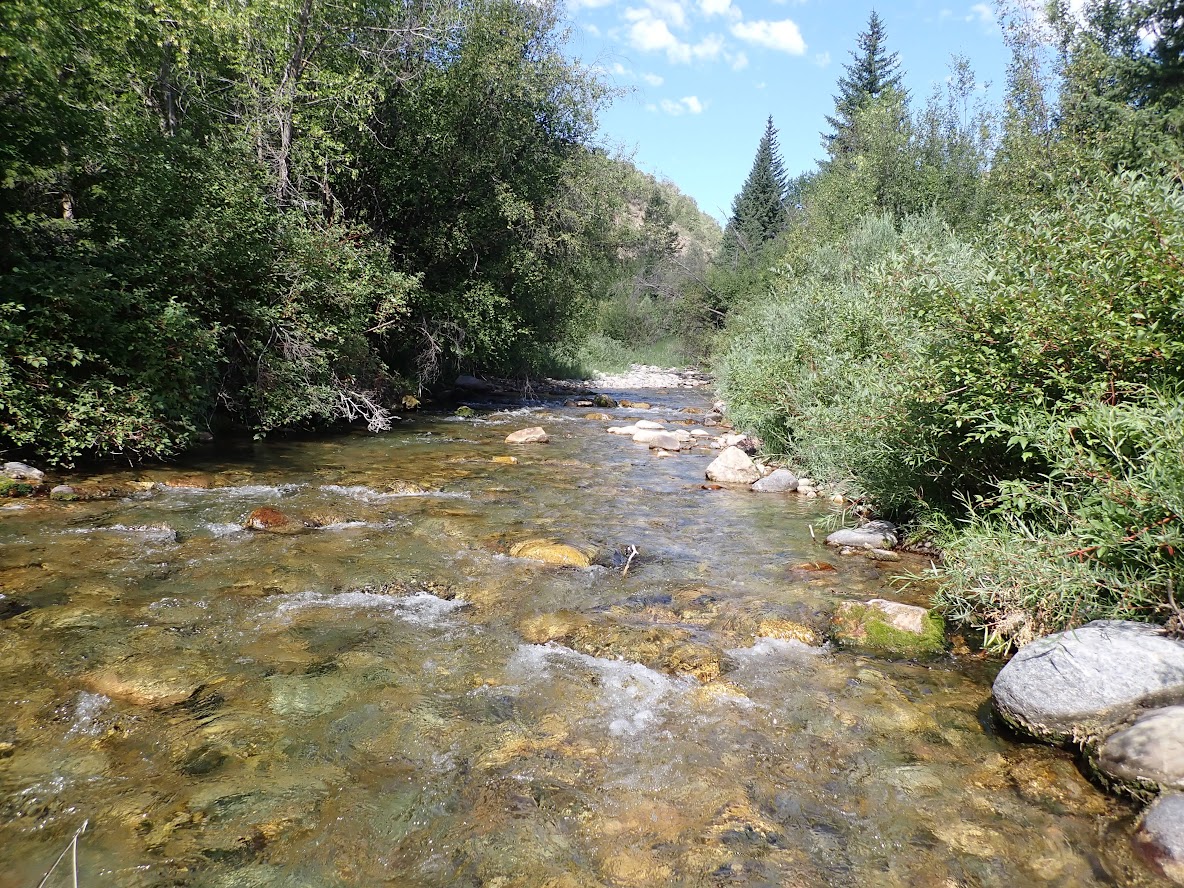 For this outing on a relatively small stream I chose my Orvis Access four weight. The weather was around sixty degrees, when I departed at the trailhead, but the temperature soared quickly and probably peaked in the mid-eighties. Clouds provided periodic relief, but sun dominated more than clouds. The flows struck me as nearly perfect, although I only fished this creek on one previous occasion, so I had no basis for comparison. I can state unequivocally that the water was clear, and cautious approaches were necessary. 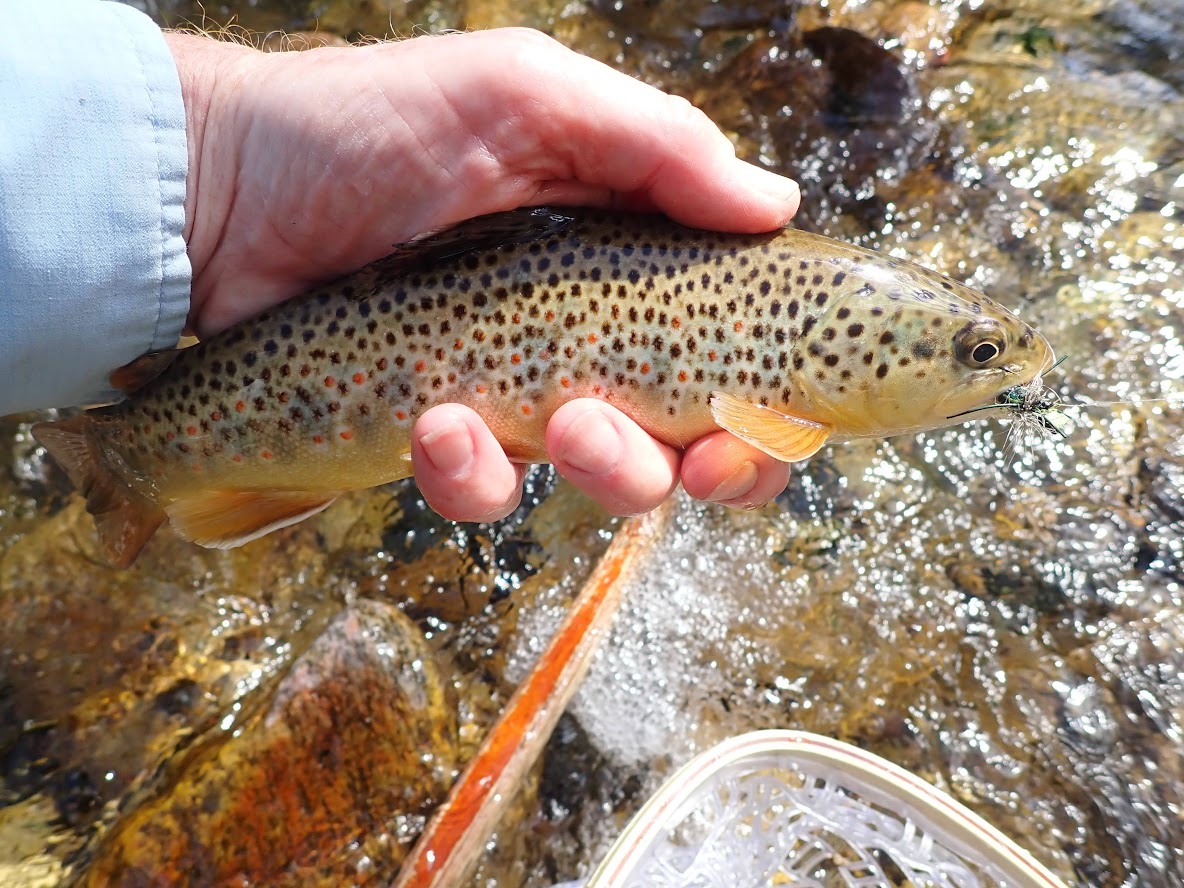 Hippie Stomper Reigned in the Morning

While I was in the parking lot, a national forest service employee greeted me and asked, “if I was going to catch a bunch of brook trout?” I replied that I was seeking trout, but then asked if brook trout were the prevalent species, and he confirmed that was the case. This surprised me, since on my previous trip I landed mostly brown trout. I was anxious to confirm or refute his statement, and I began my fly fishing venture with a size 14 yellow stimulator. I concluded that the light hackled fly would not disturb the clear moderately low water, and yellow sallies and stoneflies are a proven staple in high mountain streams. The theory seemed logical,  but the local trout refuted it, as I only managed to generate a few tentative refusals. 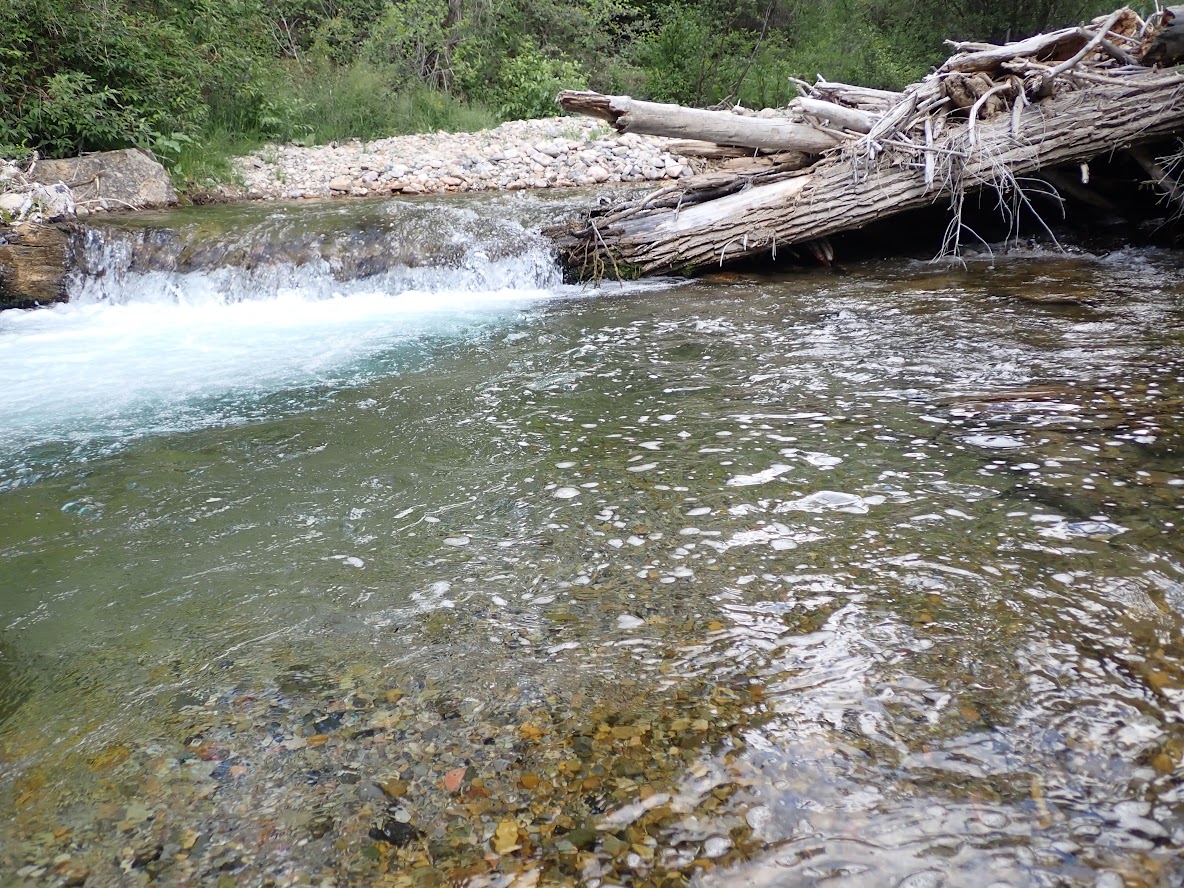 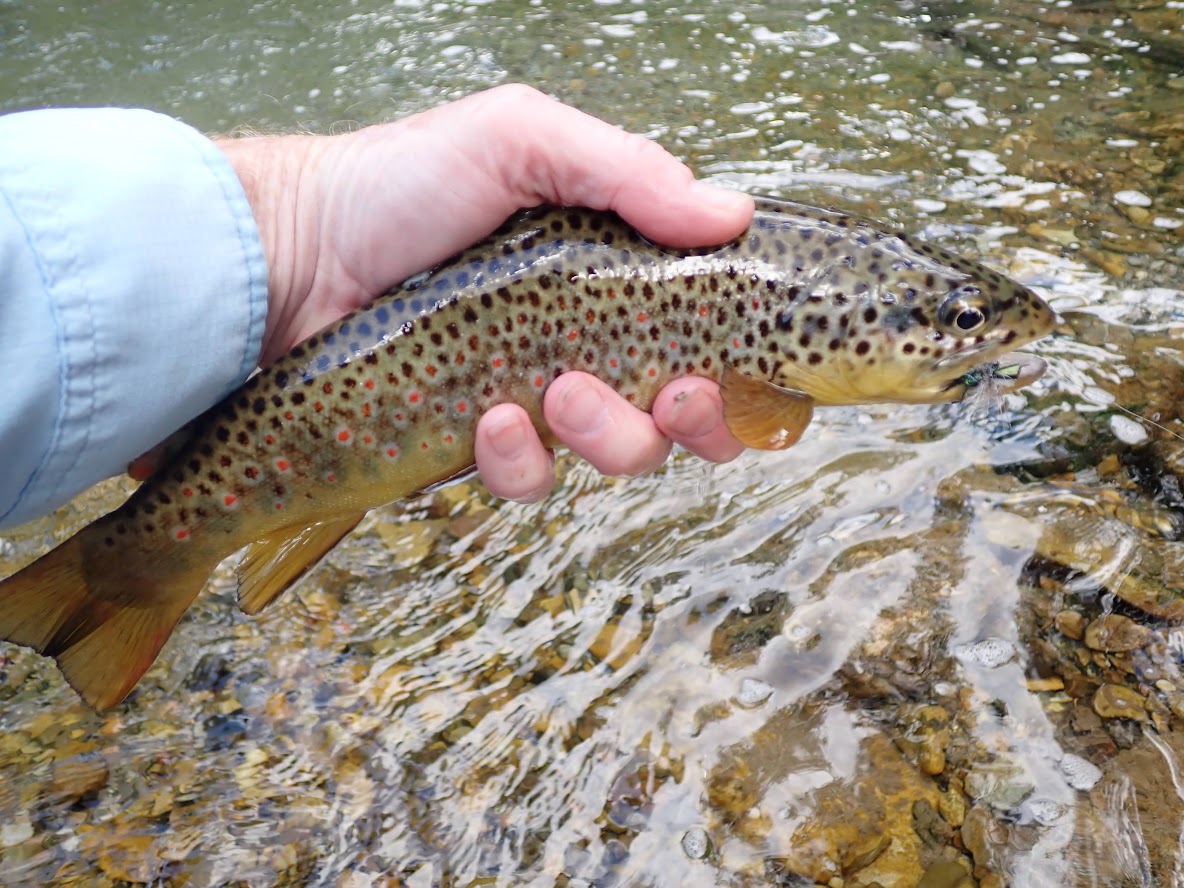 I paused to reevaluate and decided to change to a hippie stomper. The foam attractor has been a hot fly on recent trips, and when I reviewed my blog post from my last visit to Lake Creek, I noted some success with the foam imposter. The hippie stomper option proved to be exceptional, as I landed nineteen trout between 10:15AM and noon. This batch of netted fish was mostly comprised of small brown trout in the seven to eight inch range, but a sprinkling of eleven and twelve inch fish kept me focused and guessing. The two morning hours were the highlight of the day and validated my high mountain creek choice on a hot day in late July. 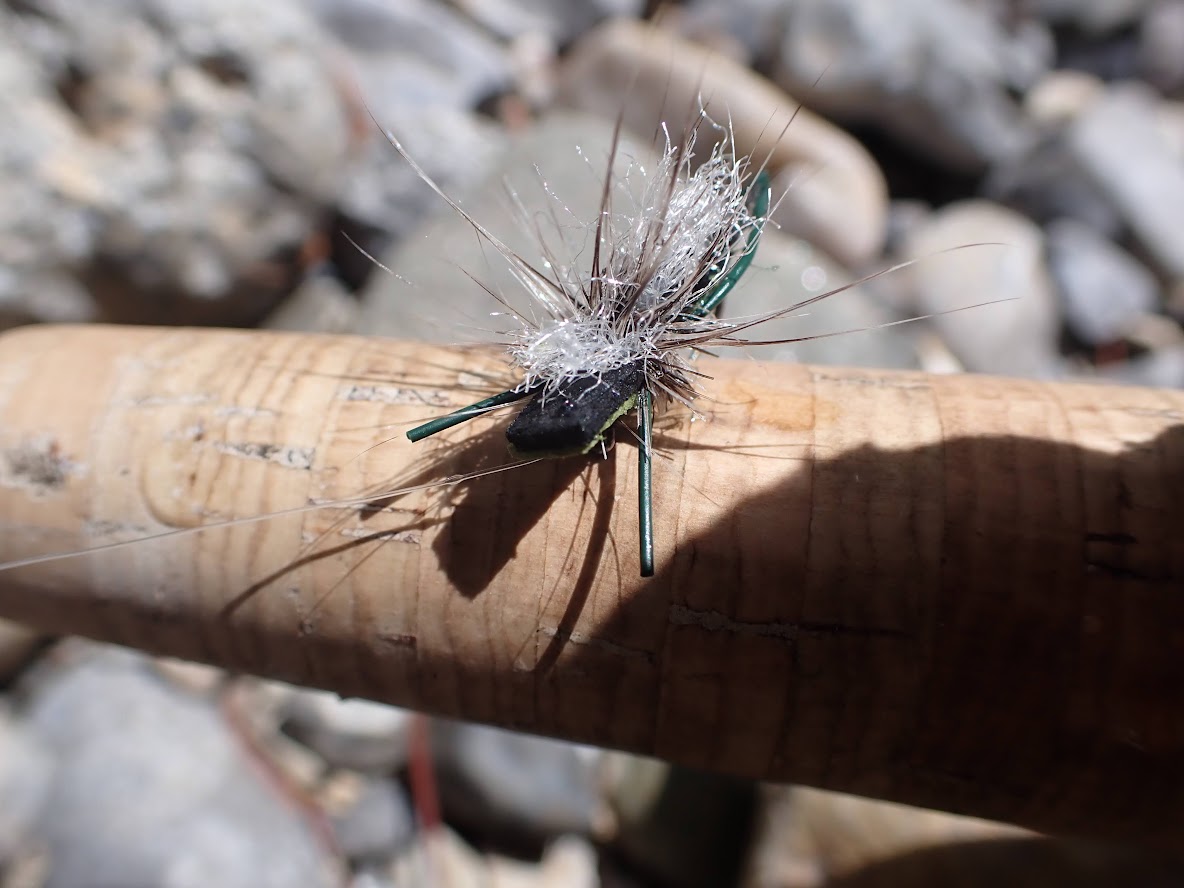 Star of the AM

After lunch a lull in action caused me to once again evaluate my fly offerings. How could the stream residents suddenly reject an attractor that they found so delectable earlier in the day? I decided to add a nymph dropper, since I suspected that larger fish were present in some of the deep holes. My logic suggested that I simply needed to go deeper. Once again my thought process was faulty, and the addition of a beadhead salvation failed to stir interest. The hippie stomper was mangled and waterlogged from its workhorse morning duties, so I decided to retire it and introduced a size 10 classic black Chernobyl ant to my line. The Chernobyl accounted for a few fish on the previous visit, and I had a hunch about the low riding attractor with a pearl chenille body. The Chernobyl ant is very buoyant, and I loved the idea of flipping and roll casting the foam terrestrial with no need for backcasts.

Scar on This Beauty

The Chernboyl ant yielded two brown trout, albeit twelve inchers, before it also suffered through a slump and began generating refusals. My mind once again went into overdrive, and I decided to downsize to a Jake’s gulp beetle. Historically the downsizing terrestrial strategy paid off, but on Wednesday that was not the case. I concluded, that I was over analyzing the situation and reverted to a hippie stomper, and Immediately I was rewarded with a small brown trout to bring the fish counter to twenty-two. Unfortunately the hippie stomper did not exhibit the same magic as displayed in the morning, so I added a size 12 olive stimulator on a one foot dropper off the bend of the hippie stomper. 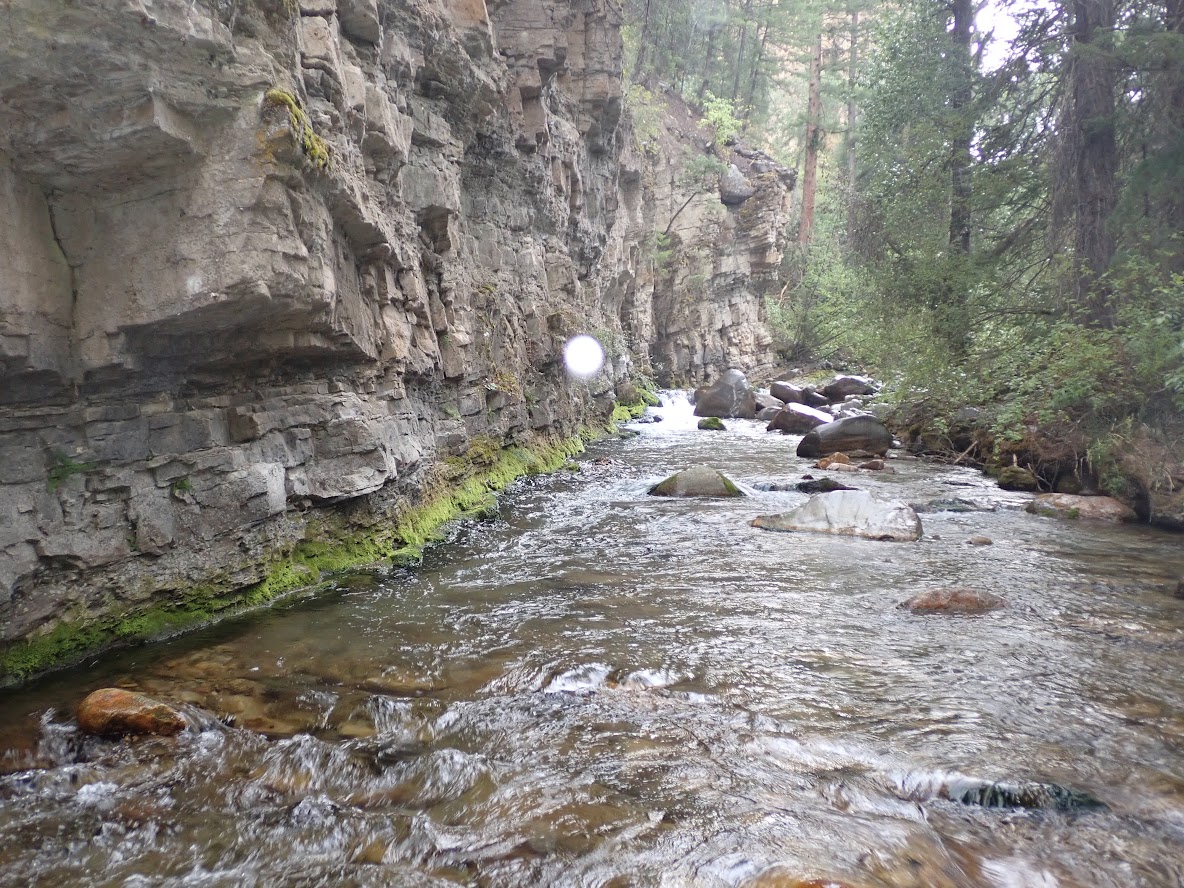 Within a few casts a fish crushed the olive stimulator, but I broke off the fly in the process of fighting the wild battler. Could the olive stimulator be taken for a western green drake? I recalled seeing a couple on my previous trip to this same creek. I replaced the olive stimulator with a size 14 harrop hairwing green drake, and the rest is history. The catch rate lagged the morning sprint, but I ratcheted it from twenty-two to twenty-eight, before I reeled up my slack line and called it quits on a successful day. Of the final six trout netted, one slurped the hippie stomper, and the others sipped the green drake. The average size of the final six of the day surpassed the earlier catches. 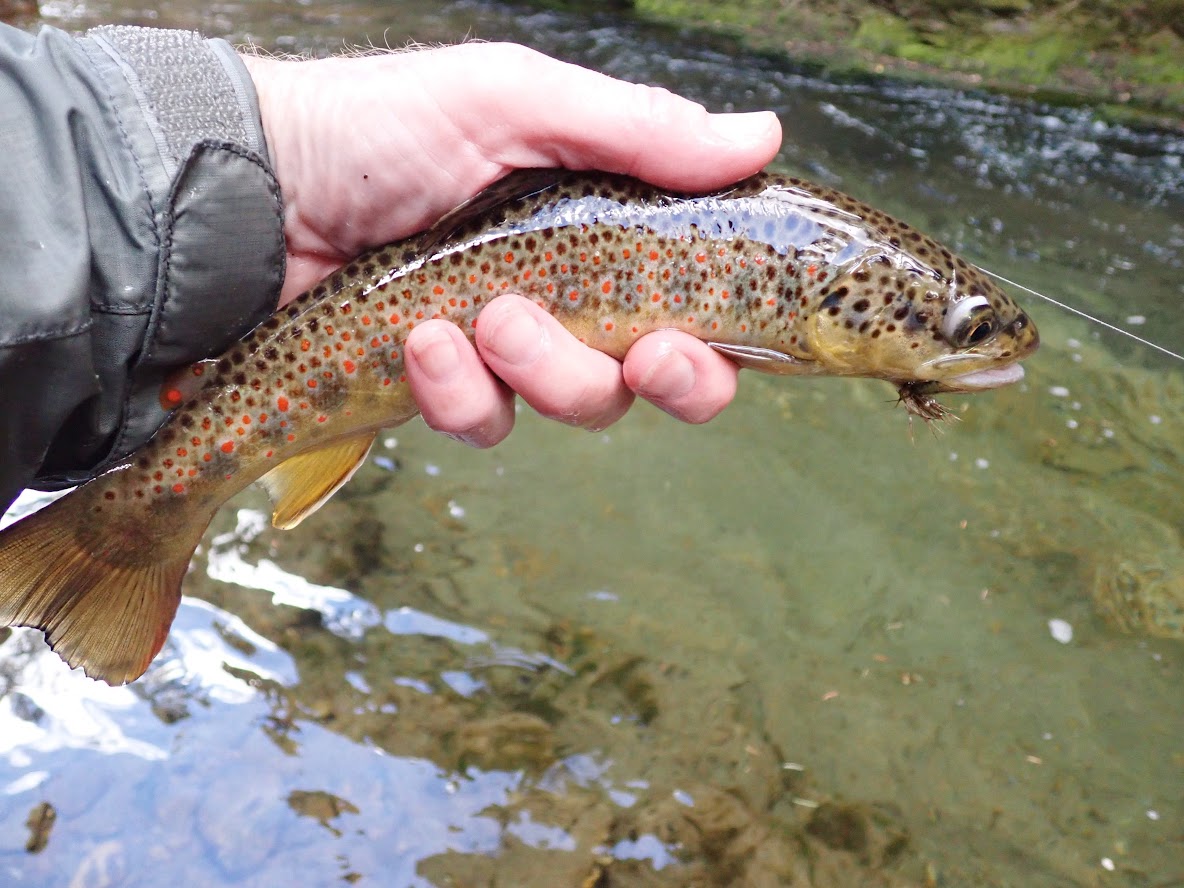 Wednesday, July 29 was everything I expected. The morning blitz was actually unanticipated, but willing fish rising to an attractor dry was among my envisioned outcomes. I progressed upstream for .5 mile and popped casts in all the likely fish holding lies. Surprisingly, very obvious deep pools and eddies were not as productive as more obscure locations. Of course the landed fish were matched by a significant number of refusals and temporary connections. I am fairly certain that the bright sun and heat had a serious impact on the catch rate in the early afternoon. Nevertheless I persisted and managed to tempt the reluctant feeders with a large juicy green drake imitation, although I never saw a natural in the environment. More so than usual I paused to drink water and reflect on the arid yet beautiful surroundings. I am already anxiously anticipating another trip to a high mountain creek. 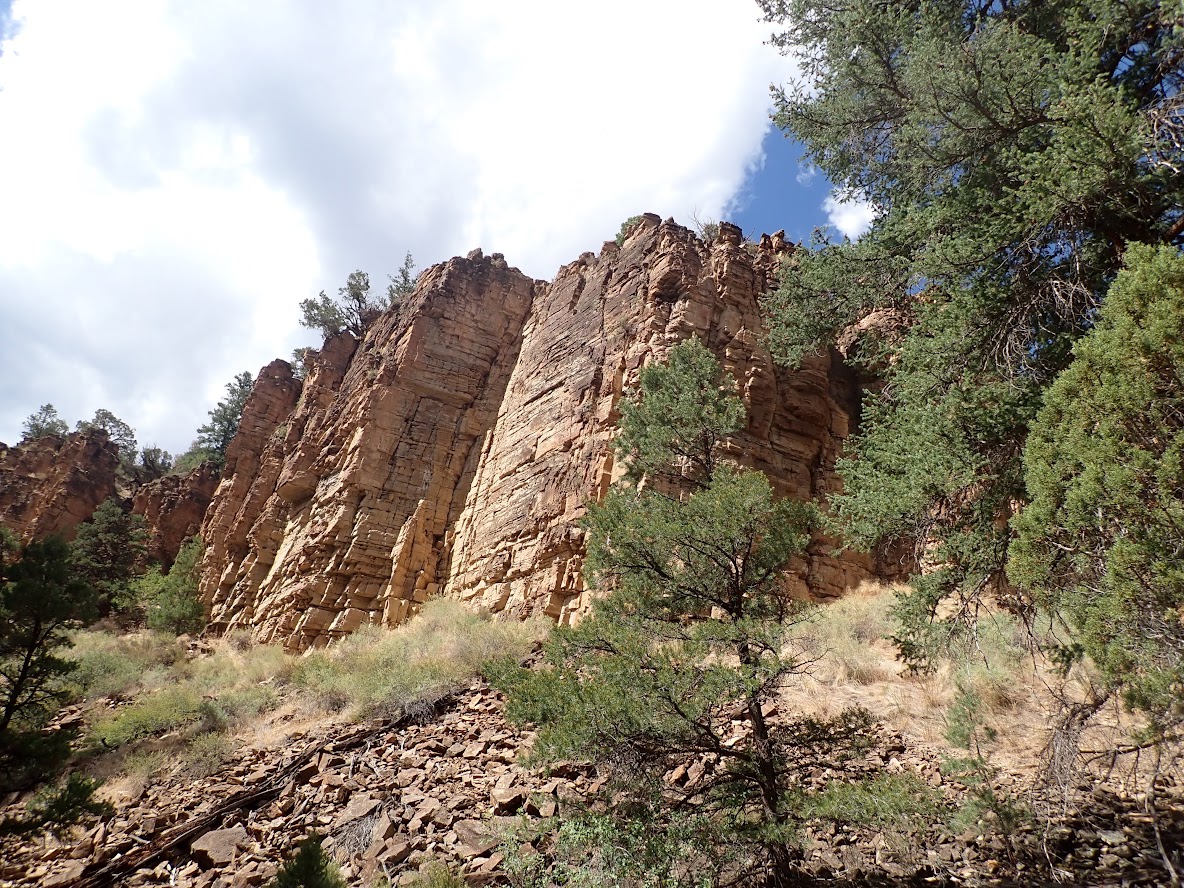